Our family LOVES the Family Feud. We honestly watch it most every day & it's always on when we are together as a family. So you better believe that when we saw tryouts were coming to Kansas City that we were going to do whatever needed to get an audition.

We started thinking about ideas and planning our video out but it just kept getting pushed back because one thing after another kept coming up. It was down to the final weeks to submit and we needed to do something, we invited everyone over to the house & as Justin finished dinner, the rest of us had a few drinks and brainstormed a little.

In the end, we came up with a 5 minute video where Janet introduced our family and then she played Fast Money--it was hilarious but unfortunately, it will not be shown to the masses. She may kill me.

So we submitted it with a little paragraph about our family & we waited. But not for long. Less than 36 hours later and we had received an invitation to their auditions and we just need to confirm a date and time. 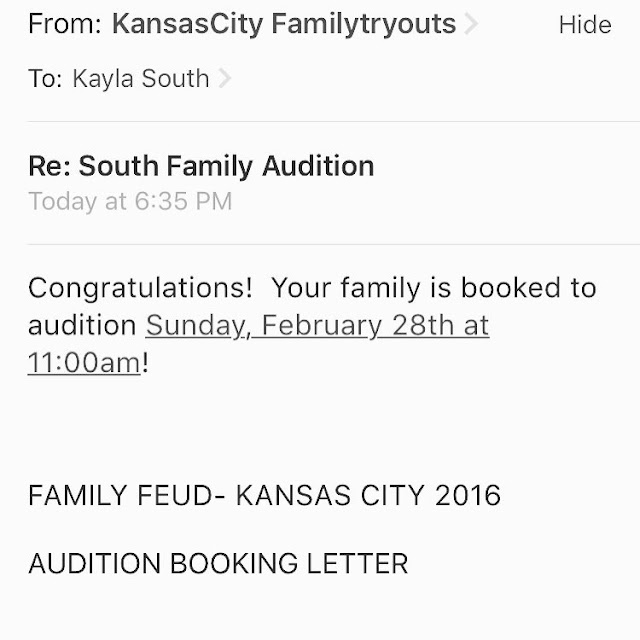 Now, we just needed to find sitters for the kids. We would have loved to take them but they couldn't go back with us and they said it could take up to three hours. Luckily, my mom was able to come up and keep the kids while we ran downtown & gave it our best shot.

According to FoxNews, 6000 families sent in applications and around 700 made the audition so on Sunday at 11 we filed in 200ish other families looking to get noticed. 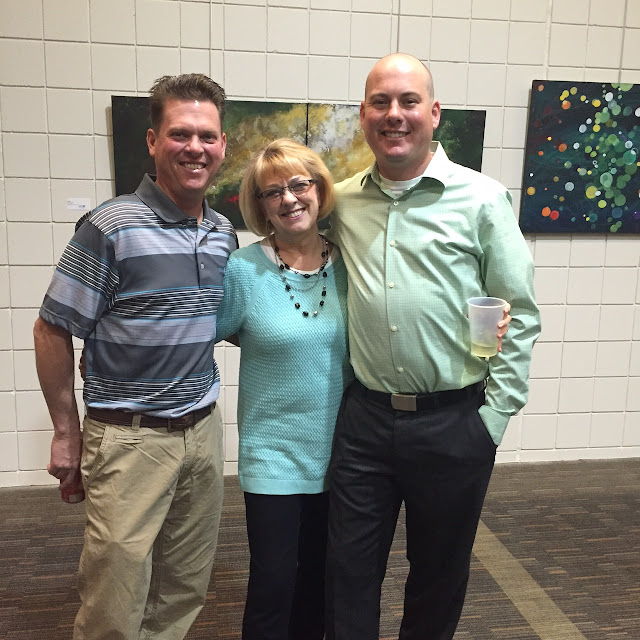 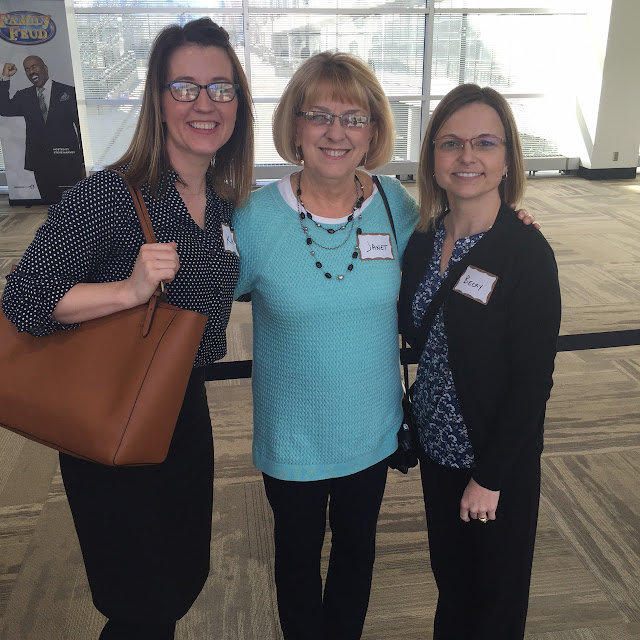 We finally made it to the front of the line and we were given our official family application and told to proceed to Room B. We were one step closer. 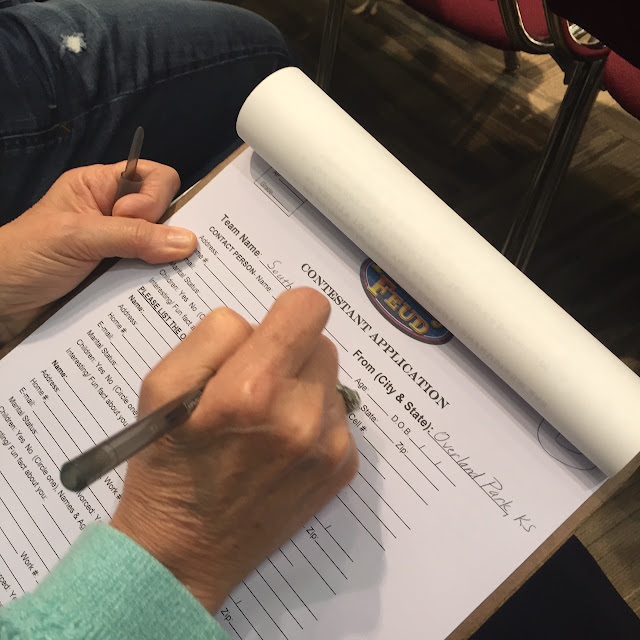 Heading into the interview we had our order figured out---I would be the captain, then it would go Adam, Janet, Justin, and Becky would be our sudden death player. We made a game time decision to switch it up and Janet assumed the captain role followed by Justin, Becky, Adam and I would be the sudden death player---we later found out that if you make the show, they have the right to choose your order so it really didn't matter who was playing sudden death.

A show producer ran through the rules and tips for getting on the show. Two teams would go head to head, each team having the chance to "play" and then huddling up for the steal too. The first two players on the team would get to go head to head for "control" of the "board". Lasted 5 minutes, maybe.

So we took our seats in the room and waited for our family name to be called. We waited. And waited. 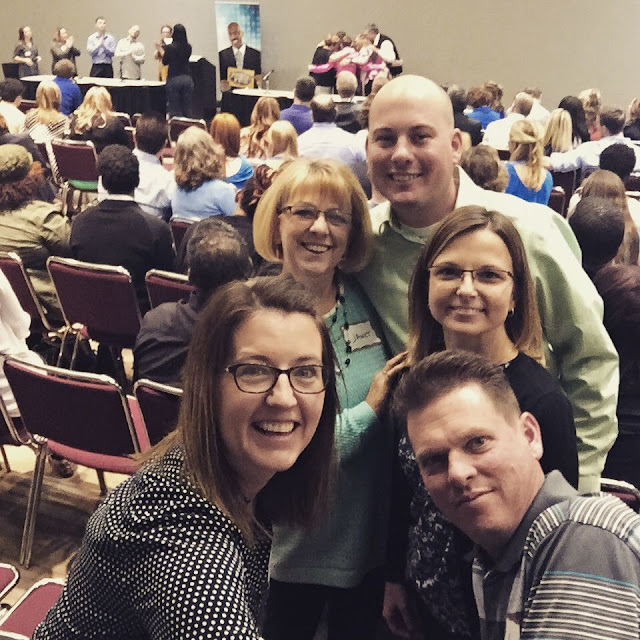 And finally it was called---and we actually were playing against a parent of one of Janet's former students, so bizarre.

We don't have any pictures from our turn but we got two great questions:

Q. If teachers had eyes in the back of their head what would they see?

Janet rang in first---as she should have since she was a teacher---and said "talking"  NUMBER ONE answer & we controlled the board.

We played through, Justin got on the board with cheating, Becky with passing notes, Adam with daydreaming---which I was going with sleeping so I had to change mine to fighting and that got us an X. Then Janet said bullying, X. Justin came through with _______ and then Becky couldn't come up with anything else, the rest of us couldn't either but you better believe we were clapping and yelling Good Answer the entire time. Control moved to the other team and they couldn't come up with anything either so we WON! and we did the infamous, jumping around in a circle hugging each other dance.

Question 2--Justin was up: Name something a pirate would have to remove before going to bed? The other team rings in first, Wooden Leg--Number 3 answer. Justin goes with Eye Patch--Number ONE answer! In a real game we would have had control again but since this was just a mock round the other team go their chance, and we huddled up to steal. When it came over to us we started shouting answers to Janet--hat, parrot, hook…and she went with HOOK. Number 4 and we won again!

Our time was up.

We had noticed throughout the day that a few teams were given their applications back and directed to the front table and I watched as they were escorted off to the side, to another interview---we didn't get our application back but we still had sooooo much fun. We gave it our best. 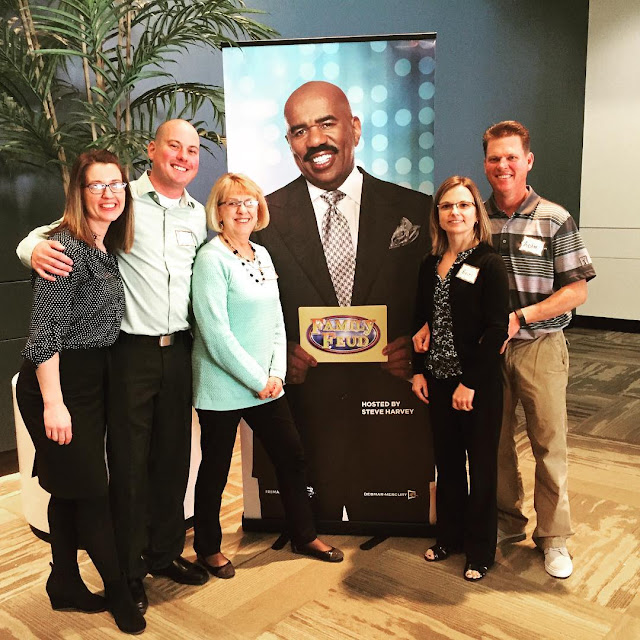 The boys are really hoping we get picked, although highly improbable, for the show---they love Steve as much as we do and really want to meet him.

Here's to hoping someone sees our audition tapes and adds us to the active file even though we didn't move onto the second part of the interview.