When I was born 34 years ago it was snowing, blizzard like. Today, as I turn 34, it's 60 out. 60 degrees--warm and sunny & probably a record high for February 10th. & So of course we had to make the most of this BIRTHday of mine. Kaden was out of school for the day and since Logan had pre-school in the morning I figured I would spend the morning with my biggest lil' man. No work & all play.

We started our little morning adventure with breakfast, donuts to be more specific & of course we couldn't go anywhere else but John's Space Age Donuts. If you live in KC and you haven't made it to John's, do yourself a favor and go, quickly---like right now. Everything is To. Die. For. Since we had a few hours to kill before having to pick up Logan and since nothing "fun" was open, we decided to head to Target. Or I decided, we would head to Target and we would do a little window shopping. You know the kind where I take Kaden up and down, up and down, up and down toy isle after toy isle and tell him, "add it to your birthday or Christmas list".  A little mean, yes, but he was a trooper, we were spending time together and he was holding and sipping a hot chocolate as we made our way around the store. & it just happened to be his first Starbucks experience too--monster created. 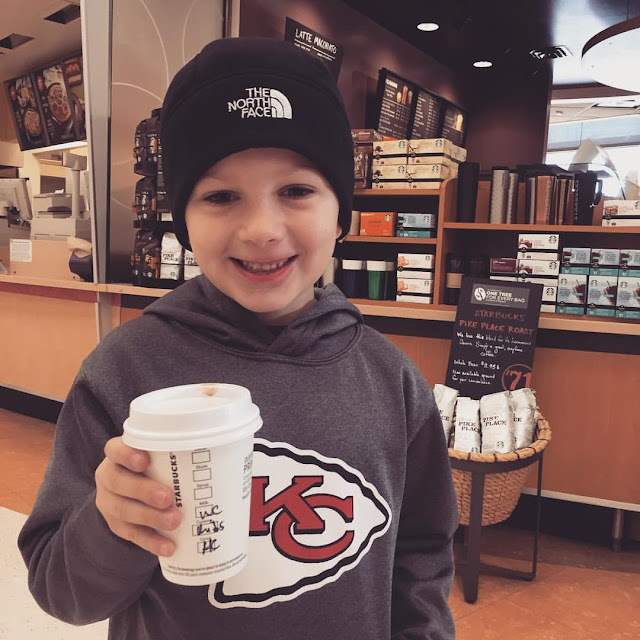 This BIRTHday was starting off right--donuts, followed by Target, Starbucks---tea and hot chocolate, my lil man. We roamed up and down most isles. Picked up a few things here and there that we need or just had to have before we headed over to the Lego store. We built and raced Lego cars for awhile, checked out every single Lego set they had and even walked out with a couple of new alarm clocks. Batman for Logan. Superman for Kaden.

We wrapped up just in time to pick Logan up at pre-school dismissal & off to Brenda's they both went as I headed for my hair appointment. It's not a birthday without a little pampering...

Justin wanted to go out for a good dinner to celebrate but we had Kaden's parent teacher conference just before 7 so that limited our options. We settled, and I use that loosely because we love it, for Johnny's & then scurried over to meet with Kaden's teacher.

Kaden read his autobiography that he is working on to us & walked us through his favorite things about kindergarten. For the most part, it was a success parent teacher conference, we just have a few small things to work on---waiting for Ms. Timmerman to ask for his help & slowing down with his handwriting.

It was closing in on bedtime for the boys so we raced home, unwrapped the two cakes that were made for me and loaded them up with candles and snapped a quick family picture before the boys serenaded me with Happy Birthday & helped blow out my candles. Then it was game on---cake for all. 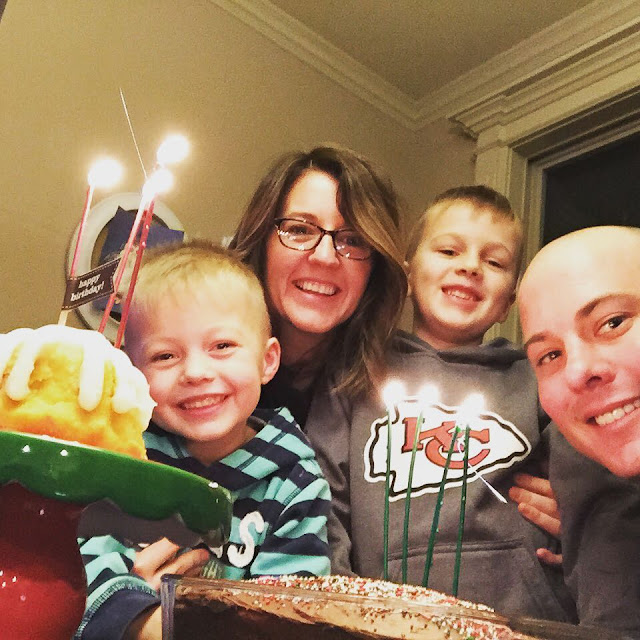 Birthday celebrations are very different from what they they use to be---good, bad, indifferent---but one thing never changes, I'm always surrounded by the people I love. & this picture reflects that perfectly--my three loves--who did the most amazing job of making me feel so special on my birthday. Cheers to 34--it's going to be a great year in so many ways.
Posted by Kayla South at 11:00 PM