It's never really good when I get bored at home because I end up starting a project with merely what I have on hand.

I've been wanting to do a striped wall but each of the walls I picked out Justin vetoed but finally I found a wall that he didn't mind me experimenting on---or he was tired of me asking and just said yes.

So it was time to start someplace & why not with a blank wall that we know we won't be hanging our Royals jerseys on since the sun shines through there in the morning. This wall wouldn't be getting a TV either because of the glare and configuration of the room. Basically this wall needed a little love so it got stripes.

I started this little project, and I say little because really it was only three stripes, around 8 pm on a Friday night, a RBV in hand and two little boys as my supervisors.

I started out by reading a post I found on Pinterest--lazy girl's time-saving tips to painting stripes, you can find it here, & she pretty much gave the confidence to just go for it.

Basically, use odd numbers so then you never have to paint the top of the wall and deal with the ceiling or the bottom of the wall and deal with the baseboards--genius, I know. She also suggested that when you measure the entire wall (87 1/2 inches for me) & divide by 7, making them each 12.5. If you ended up with a number with lots of decimals you can add that extra to the top stripe and the bottom stripe which would make each of them a little larger but not by much and you wouldn't be able to tell. See her example--it probably makes more sense then what I just wrote. 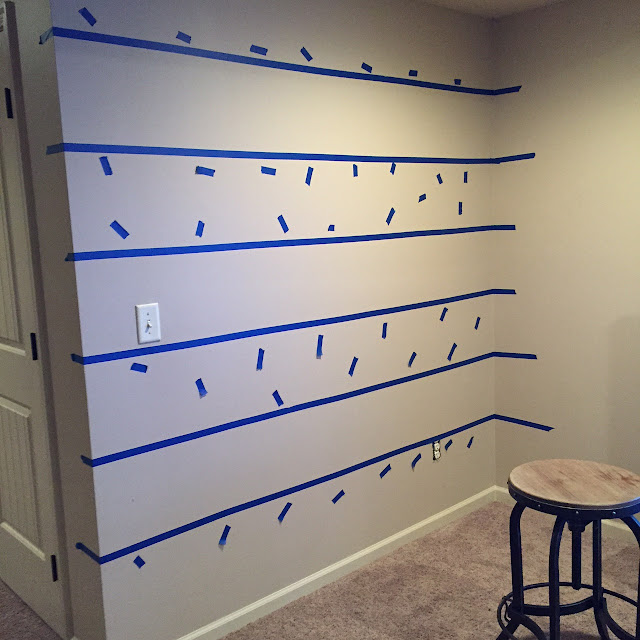 Kaden and Logan helped by marketing the areas that I wouldn't be painting, just for a little more clarification.

And then I walked to our storage area and pulled out the paint--the same Sherwin Williams Duration paint that is in our dining room. The rest of the open spaces in the house are painted this lighter color but we went for a few shades darker on the dining room & I figured that if the colors looked okay there, they would look okay here too. Now, I should state, that I really would have rather had lighter stripes but I wasn't going to paint the whole wall to only repaint stripes. I'll take the easier route on this one.

I should also note, I wasn't worried too much about that after result. If I didn't like it, I would just paint over it, it's only paint. 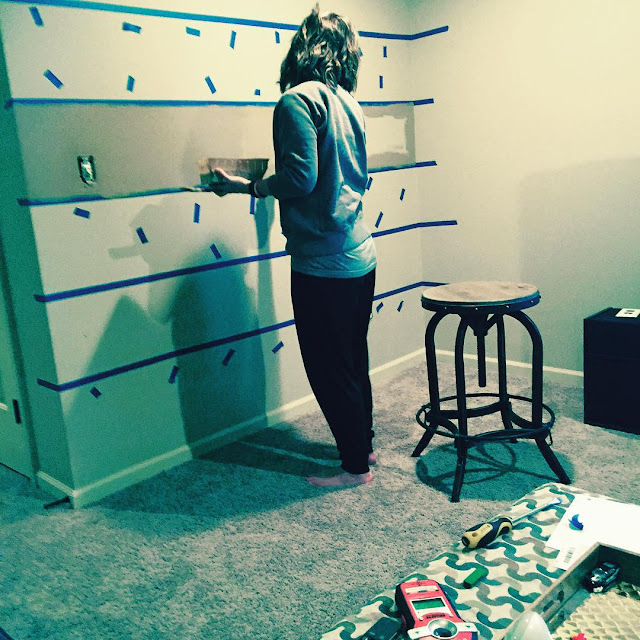 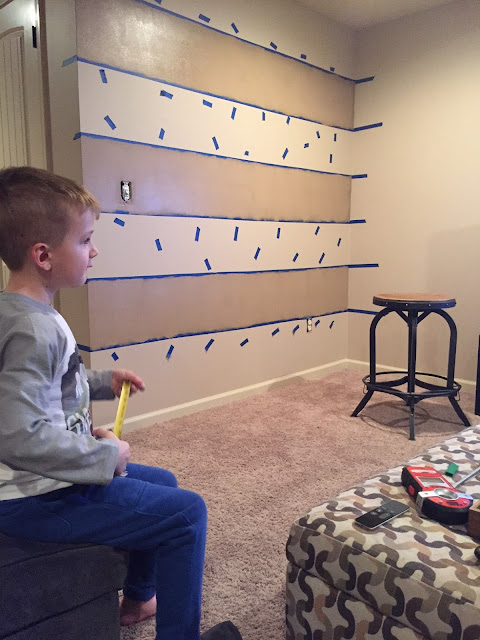 I did two coats, probably could have gotten away with one because it is quality paint but there were a few areas that needed touched up so I just went over the whole thing again. 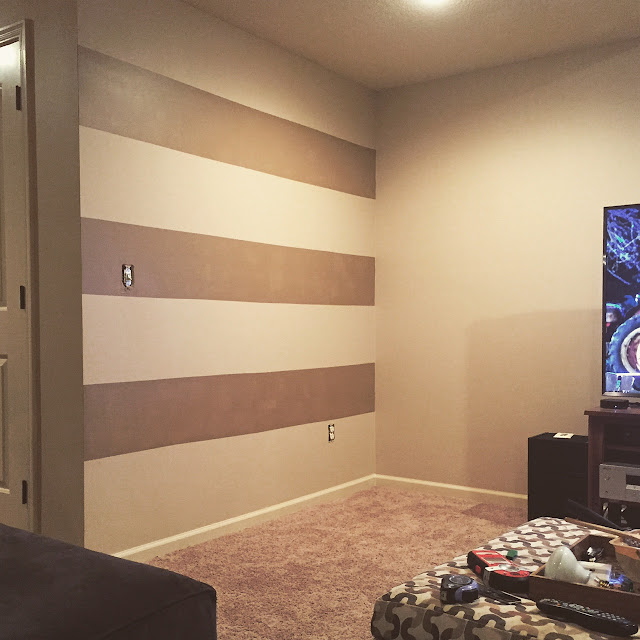 & by 10 o'clock, we had a striped wall and the only question now, what to put on the wall. Since this is our basement, semi man cave, rec room, I knew I could get away with a lot of "family" pictures down here. Justin already feels like I have pictures all over the house, which I do but it just comes with the territory. I knew I wanted a gallery wall of sorts but wasn't sure what to showcase. 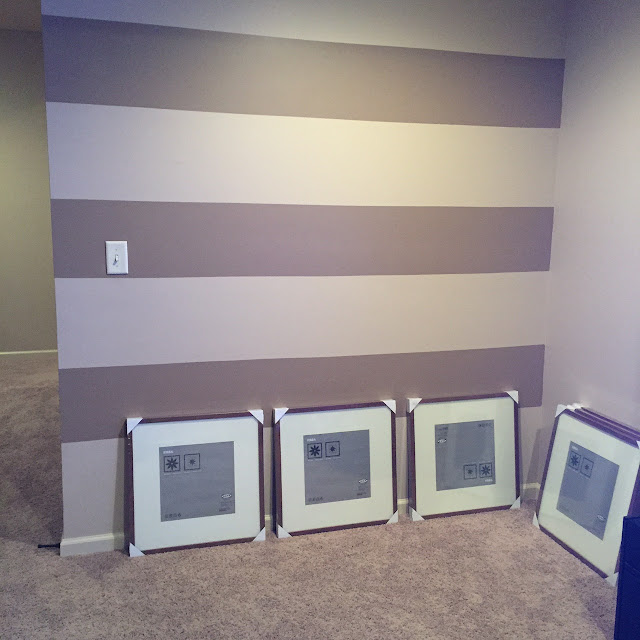 You can also see that the bottom stripe is a little larger than the rest, maybe by like 2 inches, I messed up on my math but since it is at the bottom, I'm not the least bit worried or annoyed by it.

I went to Hobby Lobby and had a new mat cut for each of the frames making the openings only 5x5 & used the Mpix app on my phone to order a few prints from my Instrgram account. We decided to showcase our favorite images from the Royals road to being World Series Champs. We picked an image of the four of us from Game 6 of the ALCS, one of Justin and Kaden at game 6, and then a few of the Ticker Tape Parade. & most importantly, Justin is happy with it, I didn't Kayla-ize this wall too much.

I went back to my handy painters tape and used it as a guide when hanging each of the frames. I botched the first attempt as I didn't take into account the light switch but luckily I used 3M Command Strips and was able to move them with ease & then I ran out of my 3M strips... 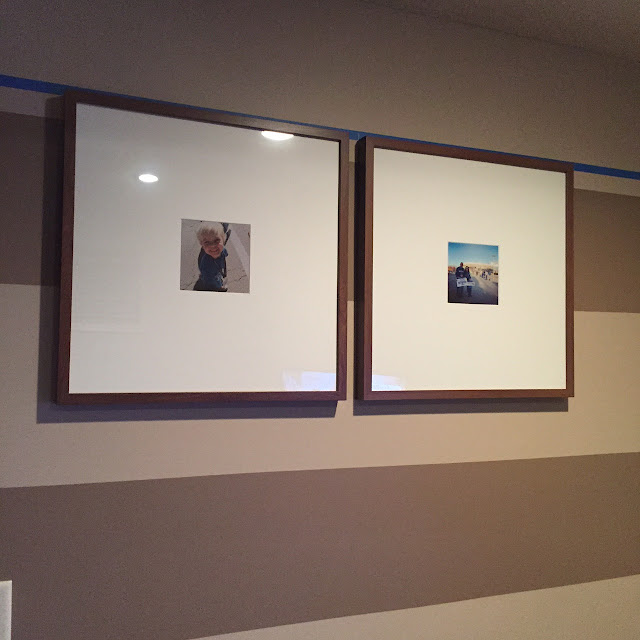 A quick trip to Target and we were back in business & in a matter of minutes, the project was complete.  Now we just need to add a couple of poofs on the floor in front of this wall and this little corner is complete & it will be on to the next project---maybe a little reading nook or an office nook. 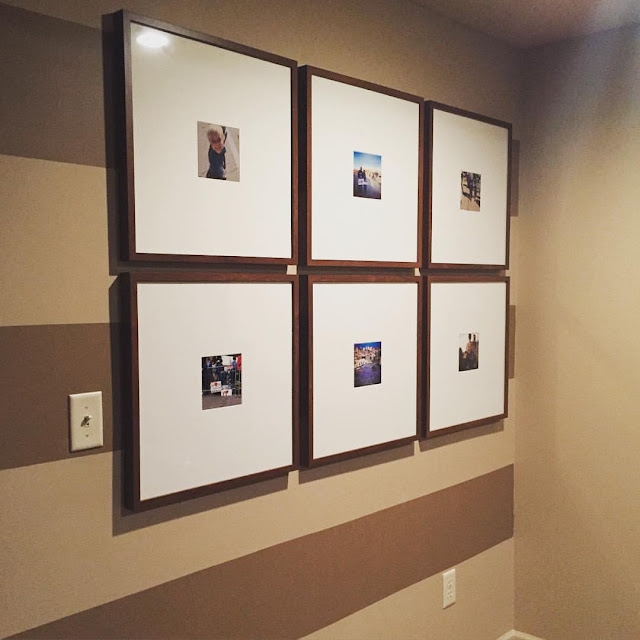