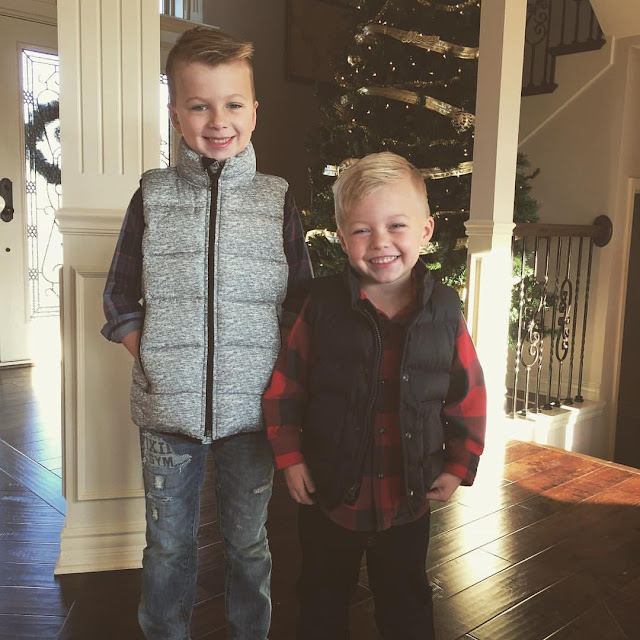 They figured out it was Grammy pretty quickly, although they didn't couldn't figure out who was going to meet us there---Papa Tom and Grandmas Sara--nope, but we wish. Nathan, unfortunately not. Emily, wrong again. They were just going to have to wait and find out.

On the ride to the train station we started giving the boys clues. It was something that we had never done before.

K: Are we going to that wood house?

No, but that was fun.

L: Are we flying on a rocket?

No but we would be getting on something and taking a ride.

That's it. You got it. We are going on a train.

He was so not feeling this adventure but as soon as I mentioned hot chocolate, sugar cookies and seeing Mr. and Mrs. Clause he was all over it.

We arrived in time to grab our tickets at the depot and then we boarded the train. As we were boarding our friends arrived and Logan & Kaden were so excited to see Breck. I think Breck was pretty excited too. 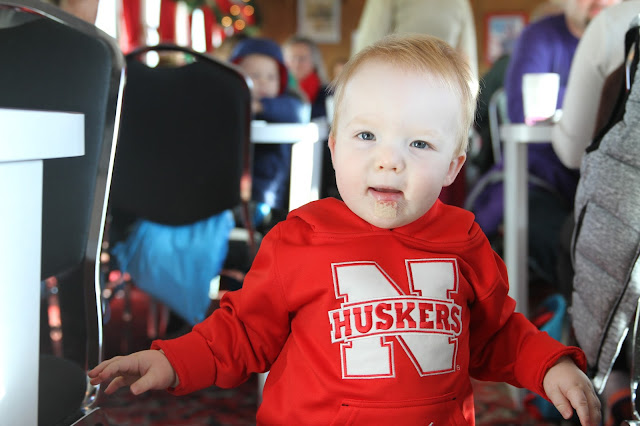 We found our table and as we sat down the boys were handed a complimentary coloring book that they eagerly dug into. 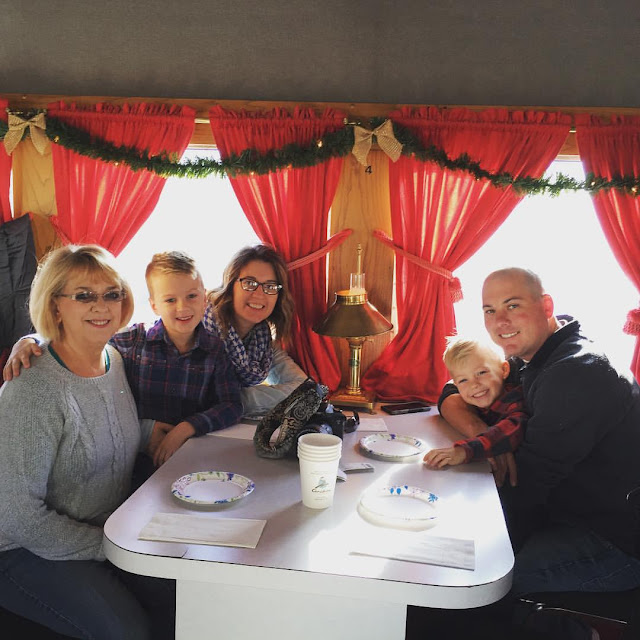 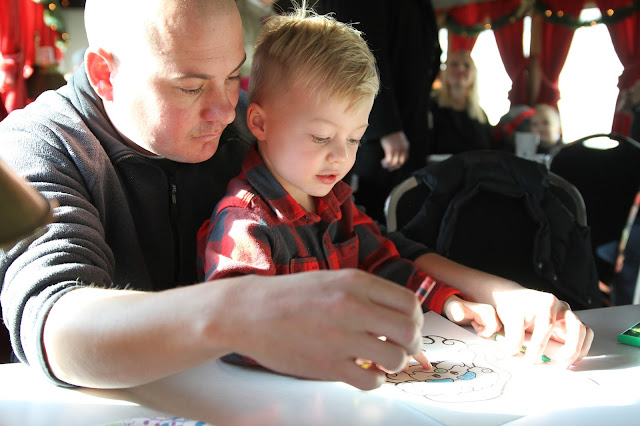 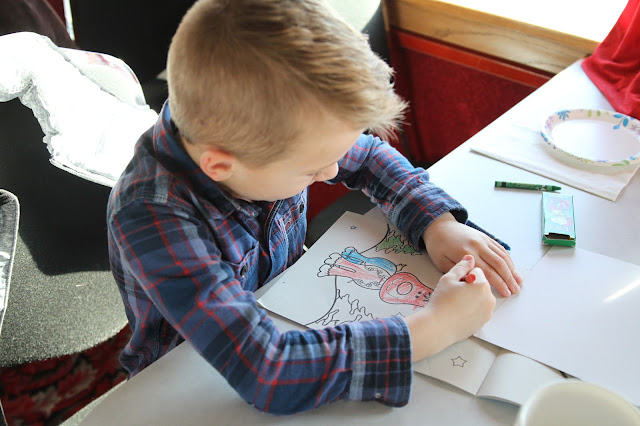 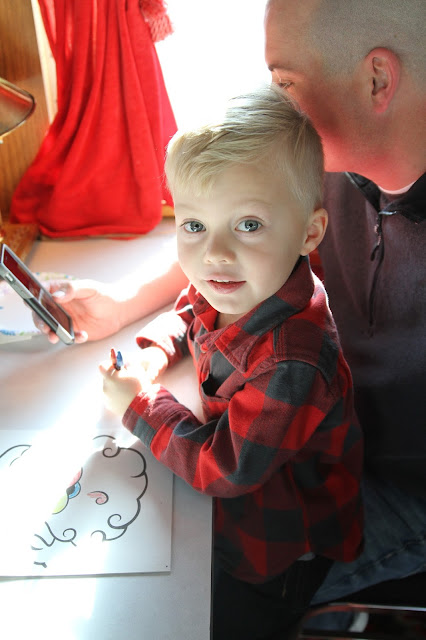 As the train started moving a very nice lady entered our train car and read Twas the Night Before Christmas. She was amazing when it came to narrating the book and even got the passengers to help tell the story as she went along. As soon as she was finished, the carolers entered our car and sang a few Christmas songs which of course, we joined in on. 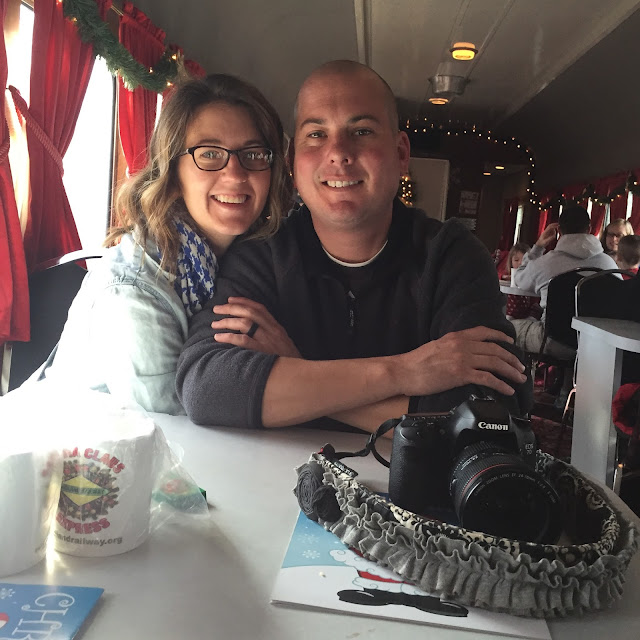 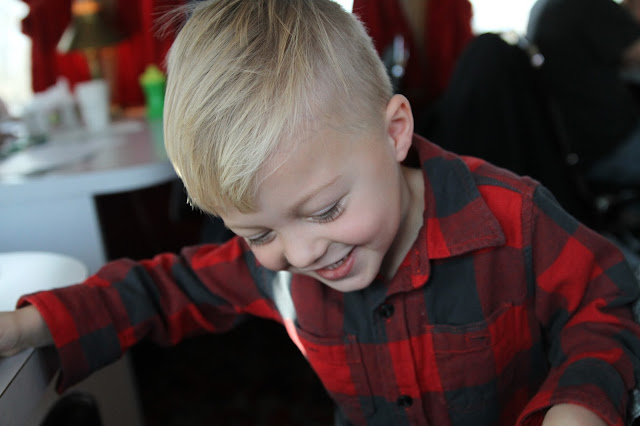 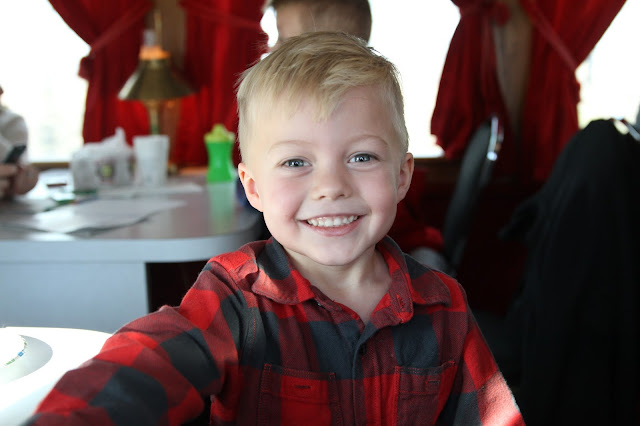 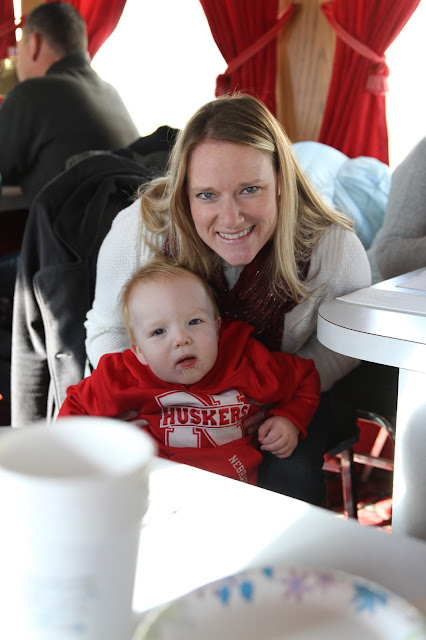 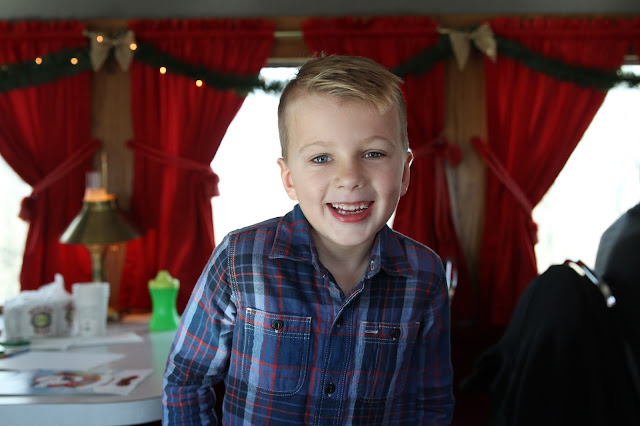 The boys played in the isle with Breck, looked out the windows, and continued to color in the new coloring books. & then Nolan taught them a new song, Jingle Bells, Batman smells, Robin laid an egg…. I guess every kid needs a Nolan in their life! 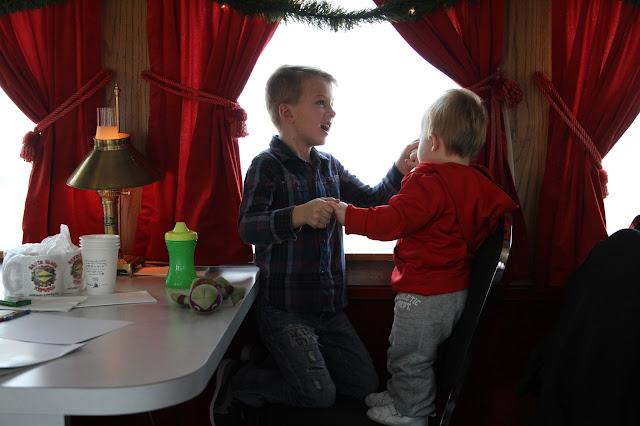 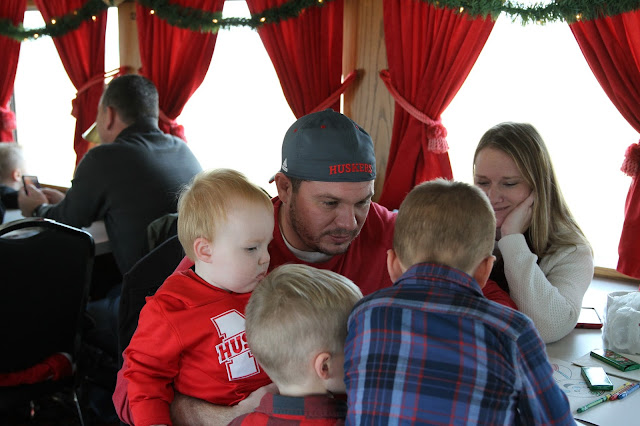 Finally it was time to see Santa and Mrs. Claus. We made our way to their very own train car… 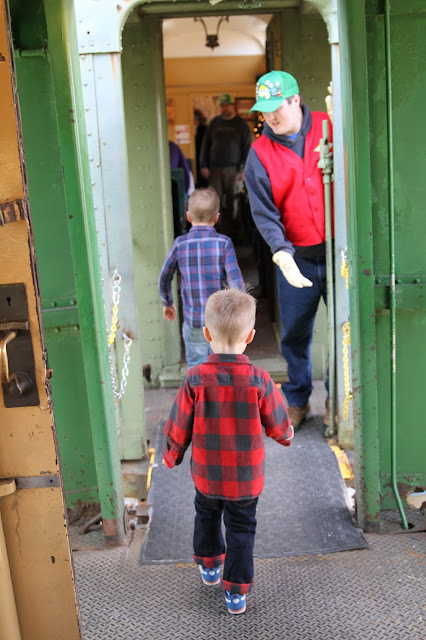 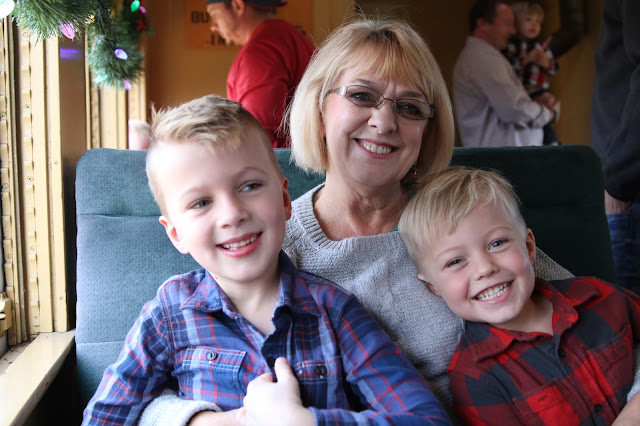 The boys climbed right up and started chatting away with them. We got a keeper when it came to a picture on the first snap but the photographer kept snapping away and at the very end, I got to snap one of them talking to Santa and Mrs. Claus too. 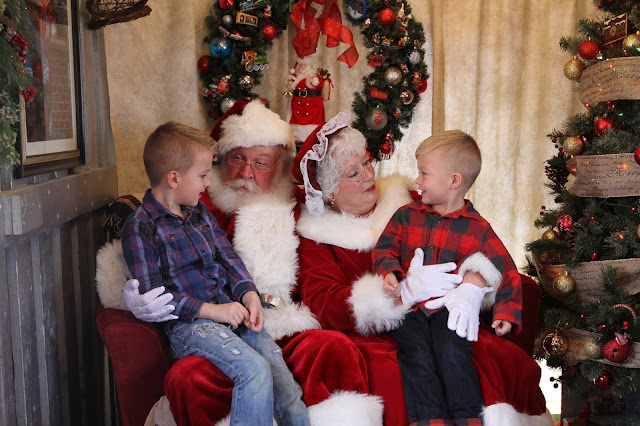 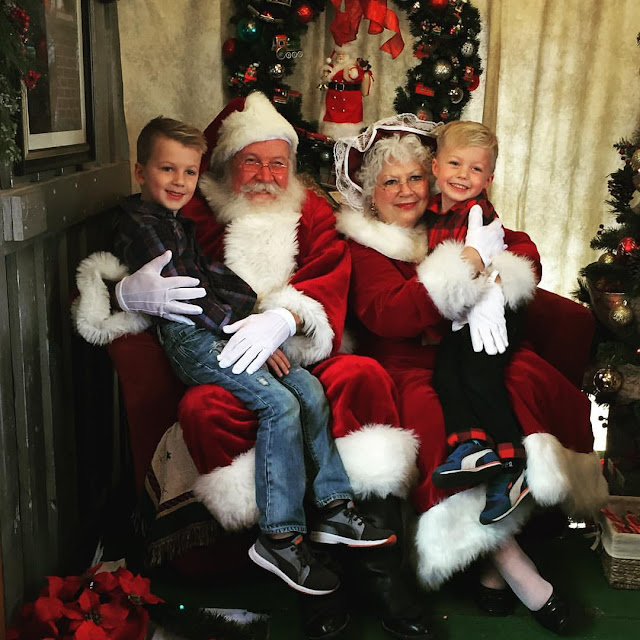 By far the best Mr. and Mrs. Claus we have ever seen and they were so sweet with the boys too. They asked what the boys wanted and they both said an air hockey table, well, Kaden said, "My brother would like an air hockey table so I think I want that too so he can get it."

Poor Breck just wasn't having it, then again, I don't know many 19 month olds that are all too excited to seee Santa. 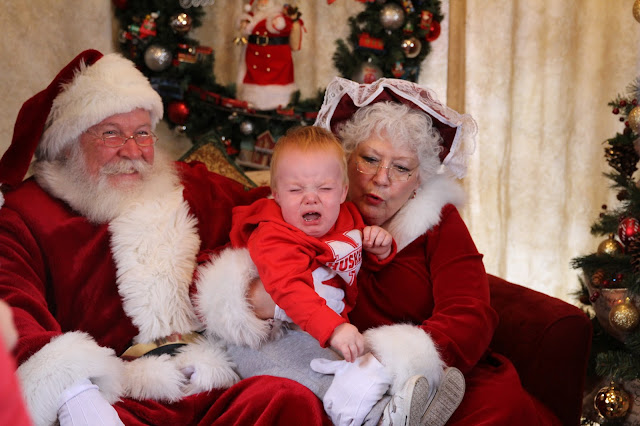 Once we made it back to our car, the cookies and the hot chocolate were waiting on us. We devoured the cookies---best sugar cookies I've had & just as they were giving us a few more, Kaden dropped his hot chocolate all over him. He got scared and got upset because it was hot and was all over his lap but we got it all taken care of and back to the cookies he went to eating. 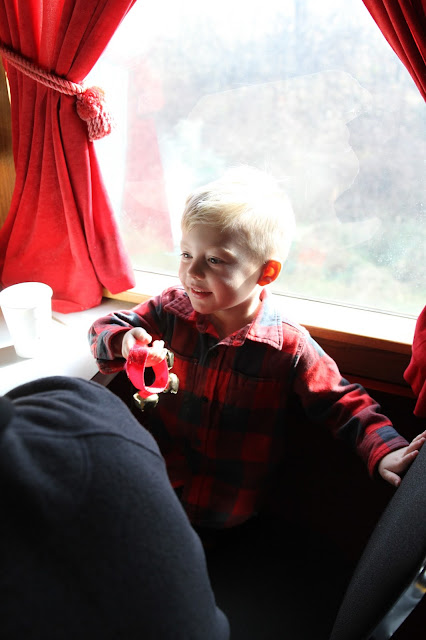 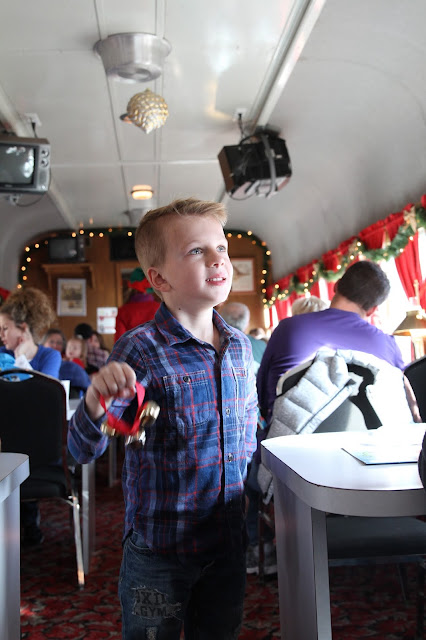 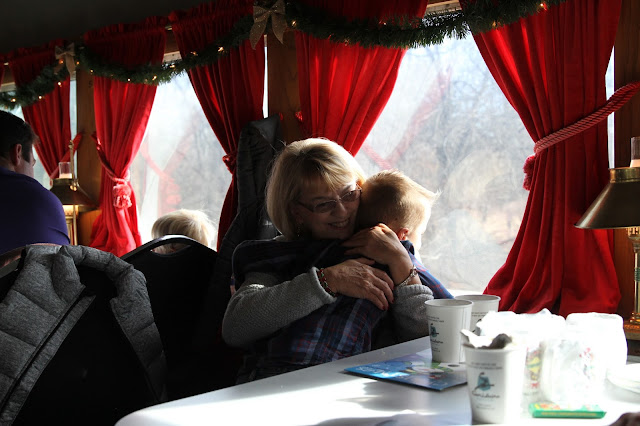 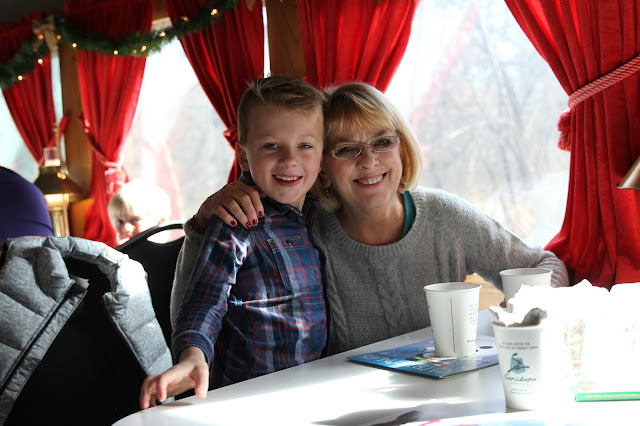 As we were finishing up our cookies and hot chocolate we got to listen to another reading & the carolers came back in to Wish Us a Merry Christmas as we pulled back into the train depot.

We hopped off the train & off we went. 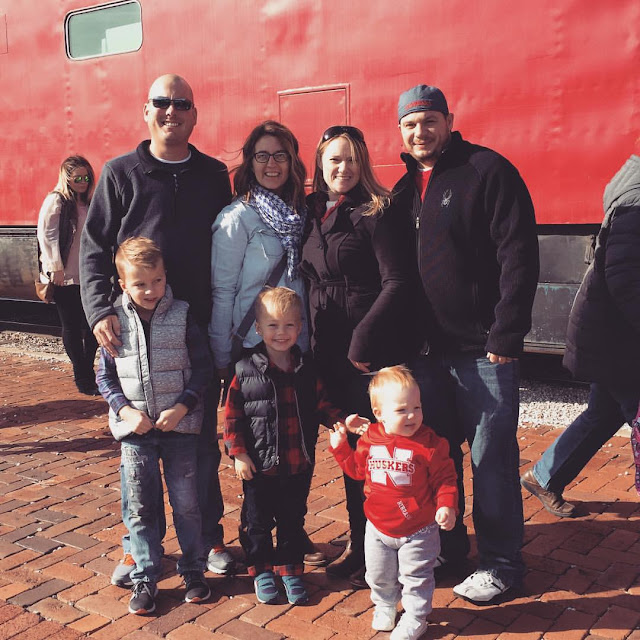 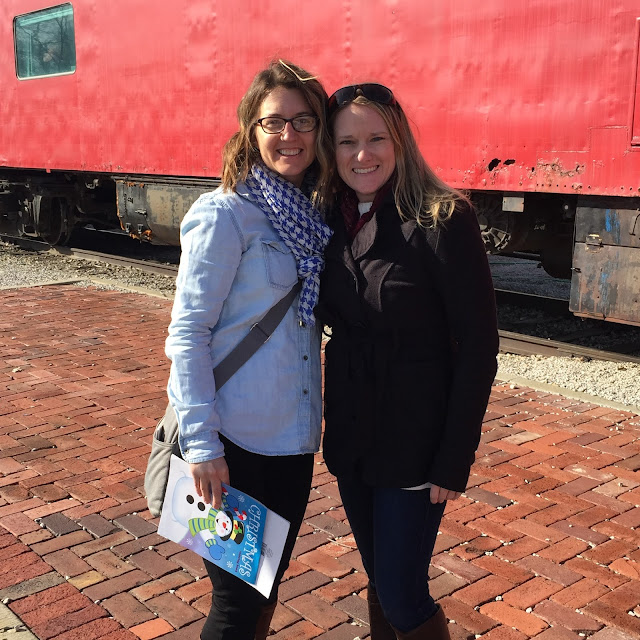 It was a great little adventure, one that wore a little someone out… 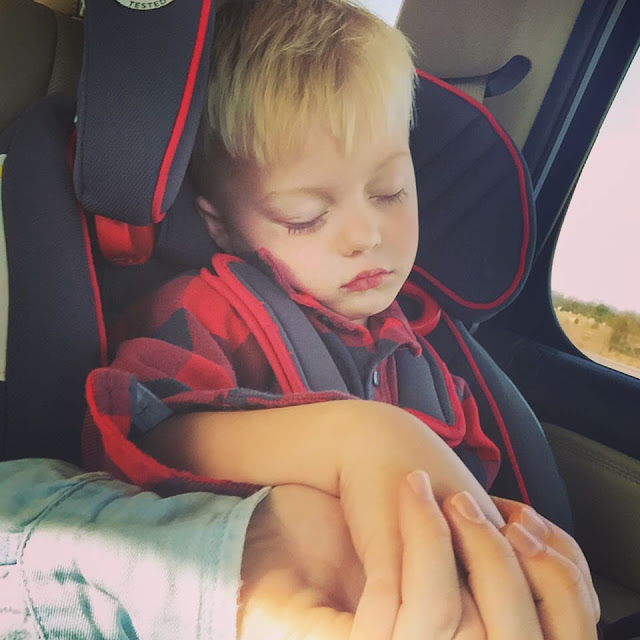 & one the boys are still talking about--It was so much fun Mom!