Remember that stat about how the Royals dominate opponents in the late innings of playoff games? Well it just happened again & this time, it was for all the marbles.

I mean, seriously, WHAT A GAME!

But first, we have to talk about how we prepared for the game. I won't lie, Sunday was the longest day EVER---game time just couldn't come fast enough.

Kaden and I took a little nap together--kind of, we might have been faking it a little. 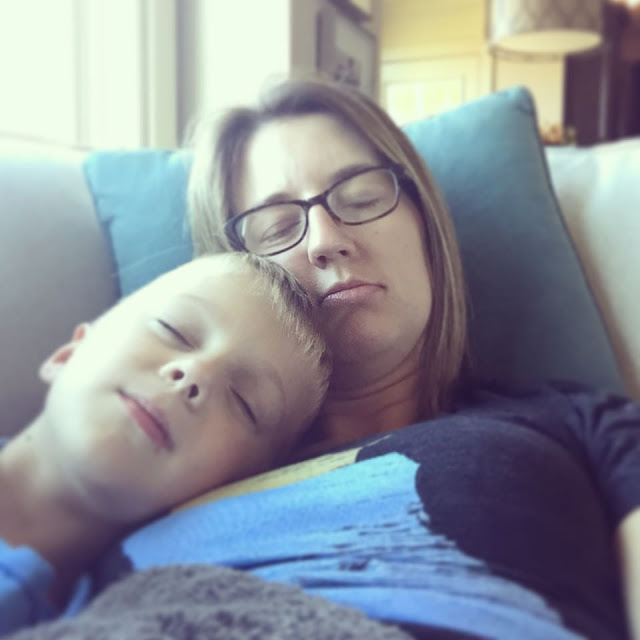 Logan, well he got himself dressed after nap time and ran outside to burn off a little extra energy. Pajama pants, old man sweater and flip flops--why not?! 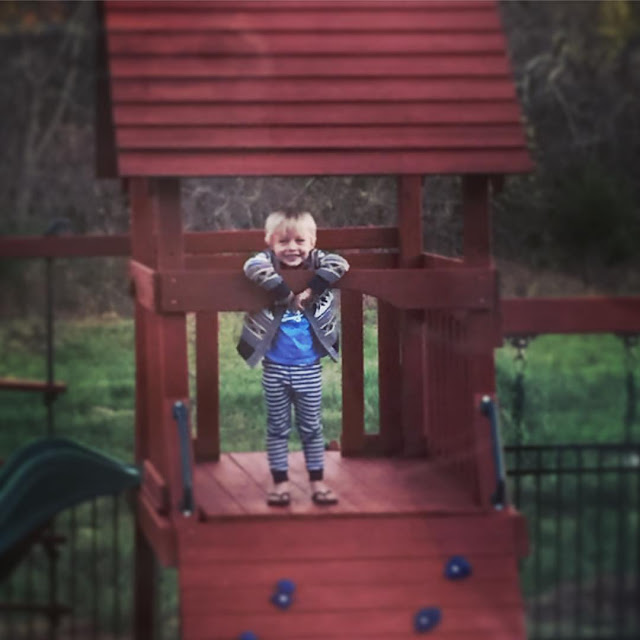 Finally, they were introducing the players and singing the Star Spangled Banner. The boys were rocking their gear and their signs. Usually the signs accompany me to the games but I was hopefully Justin and I wouldn't be traveling out to the K for game 6 and that the Boys in Blue would shut it down tonight. 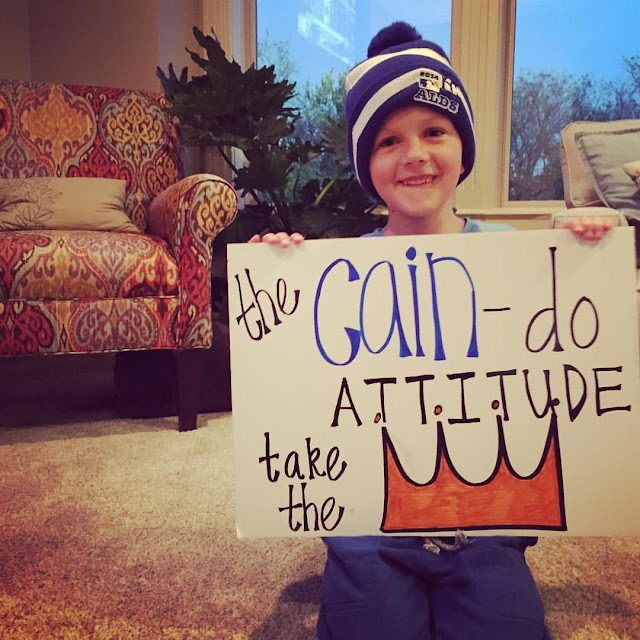 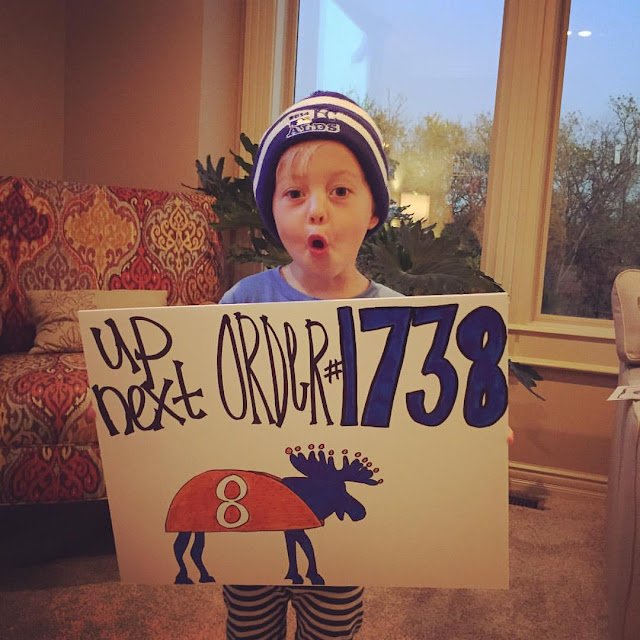 He did what everyone needed him to do, he kept us in the game by pitching 6 innings and giving up only 2 runs. Our problem, Matt Harvey, he was on fire and we just couldn't get anything rolling that is until our third time through the batting order. And just a heads up to opposing teams, don't leave your pitcher in the game for 3 rotations through our line up, we will make you sorry that 3rd time through and that is exactly what happened. Matt Harvey TOLD the manager he was going back out and the fans were calling him back out to the field so they gave him the ball, he needed 3 outs to bring the series back to KC.

It was about this time that Janet and I started figuring out plans for Tuesday. Justin and I would need to head out to the stadium around 3 ish, yada yada. & then Cain was on base with a walk. Our ears started to perk up, eyes focused once again on the TV. Hosmer squeaked in a double, scoring Lo Cain. 2-1 Mets. Morales moved Hosmer to third, one out tying run at third with Salvie up. Savlie hits an infield grounder, the third basemen looks back Hosmer and throws to first for the out but as soon as the ball left his hand, Hosmer headed home. It should have at least been a play at home but due to a wild throw Hos slid safely into home without being touched. TIED BALL GAME & a lot of screaming followed.

All we needed was to get into extra innings, our bullpen was stronger, this was now our game. We battled with the Mets through the 10th and 11th innings but when the 12th inning rolled around we were ready to be crowned champions and who better to kick off the inning than none other than Salvie. He singled to first, Dyson came in the game to pitch run and stole second. Gordon advanced him to third with a groundout and Christian Colon who hadn't picked up a bat in a game since middle of September stepped up to the plate and singled to left scoring Dyson, the go ahead run. A few bases later we added to that lead with a bases clearing double by Lo Cain. Royals led 7-2 in the bottom of the 12th and all we had to wait for was the check. Wader! 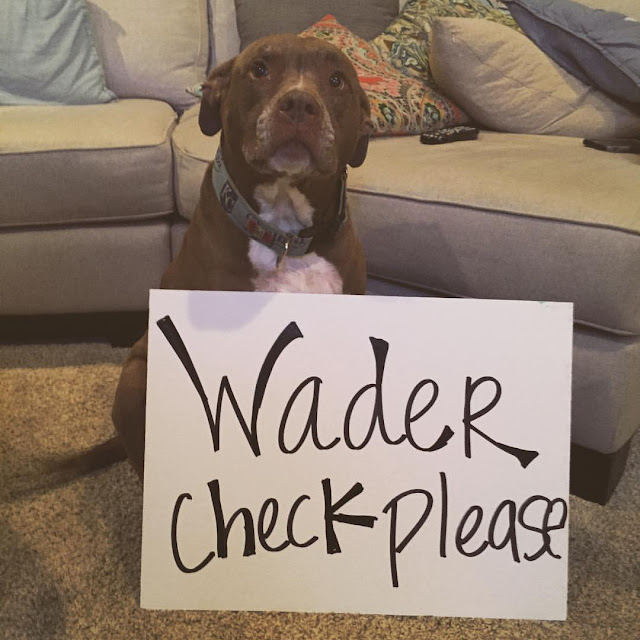 Somehow we weren't live & Justin was looking at his phone and although we were already smiling so much and ready to explode he started jumping up and down and just waiting for what he was reading to be seen on TV. Few times have I seen my husband this excited. The three of us were standing, pacing back and forth and counting down the outs until the last pitch was thrown and the Boys in Blue threw their gloves in the air in celebration. They had done it. They were THE champions. & we were on cloud 9. 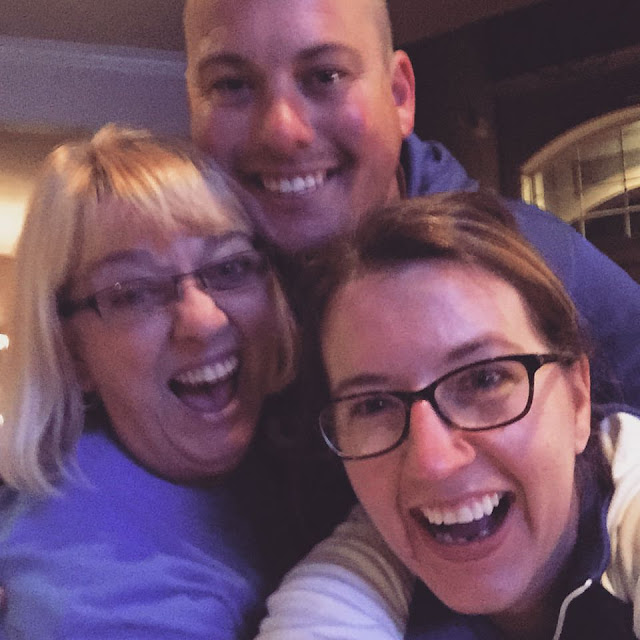 After 30 years they brought the trophy back to our city & frankly, made us all champions. They gave us memories that we will be talking about for decades to come. & thanks to modern technology, we have lots of pictures to document this NO FLUKE season! 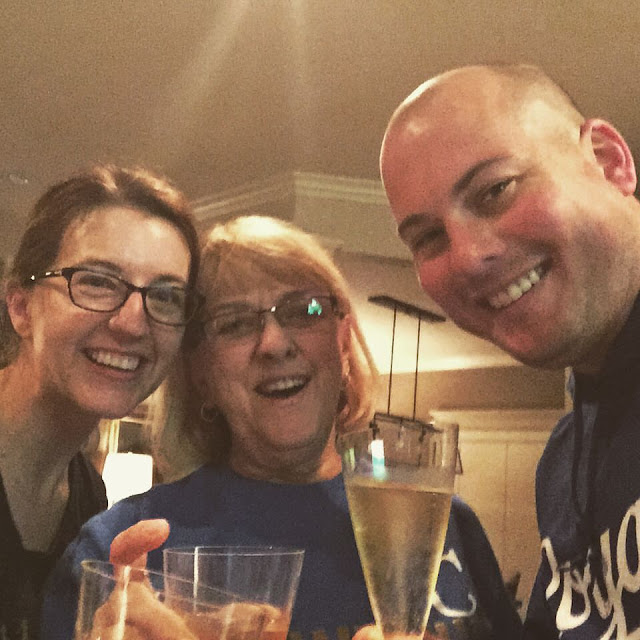 Cheers to our Boys in Blue!

*Kaden and Logan--I tried waking you up multiple times so that you could celebrate with us. Kaden you told me you were too cold and didn't want to get out of bed. Logan, you came down for only a few short outs and then asked to be taken back upstairs. So when you are older and reading through this wondering why you weren't in the celebration pictures, know that I tried, even if your dad told me not too! :0)
Posted by Kayla South at 11:24 AM