A Trip to Arrowhead

Justin had been looking forward to this day since the tickets went on sale last February when he immediately scooped up 4 tickets.


Mizzou vs. BYU at Arrowhead.

This was the perfect opportunity to take the boys to Arrowhead since we aren't ready to venture out to an actual Chiefs game just yet and they ask about going there EVERY TIME we walk by on our way to a Royals game. 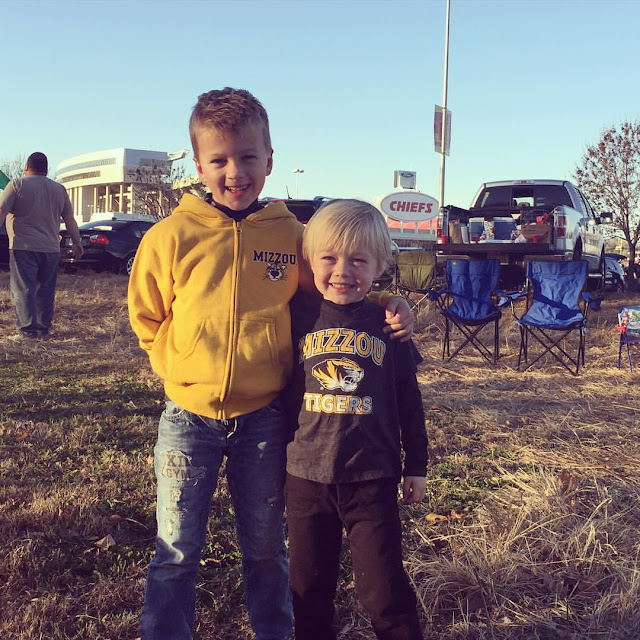 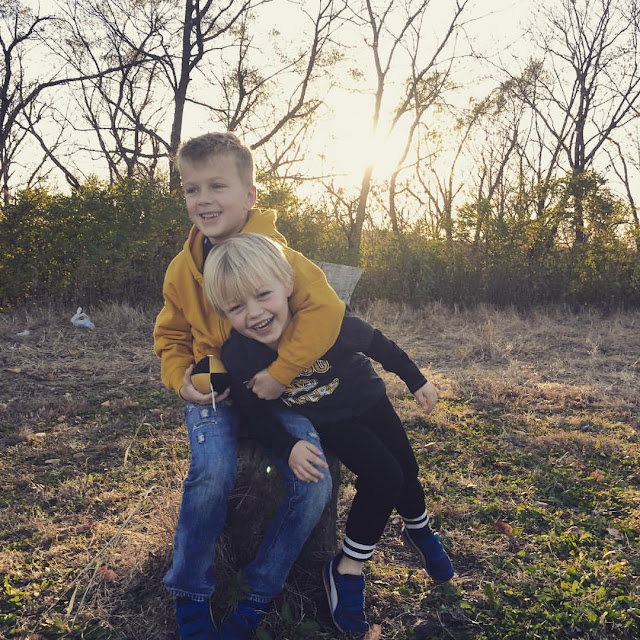 We arrived early enough to do a little tailgating and Justin found the perfect spot to park which allowed the boys to run around and toss a football without worrying about cars. The one thing that we didn't think we would need to worry about that we ended up having to watch---tailgaters finding the woods behind us much handier than the Johnny on the Spots.

The Griffith family met us out for the game and of course, Chris made some very delicious tailgating food. The boys were not only nice and full but were ready to get in the game. 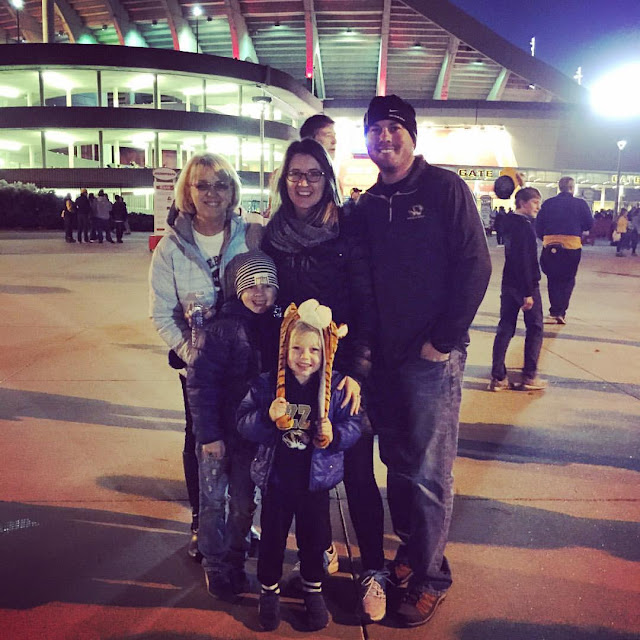 Anytime we enter a sporting event Justin and I each take one of the boys with us. This time, I had Logan and he had Kaden. We get to the front of the line, hand them our tickets and low and behold, they don't work. I don't panic just yet but as the line grows behind me I start to get a little worried as I see that Justin and Kaden had now issues. The nice gentleman kept trying and still nothing, he was looking for his supervisor and couldn't find them so he just let us go in since Justin's tickets were right by ours.

We headed straight for our seats and sure enough, someone was in our seats. Justin took our tickets to guest services and was able to get our seats moved down a few spots--same section, same row, different seats. I've always wondered about what one would do if something like that happened to them. They basically said its like an airline, sometimes double bookings happen, except in our case, the stadium was more empty than not.

& we were early into the stadium too, I LOVE watching the pre-game activities and listening to the Star Spangled Banner. & I love watching my boys stand and place their hands over their hearts with pride even more. 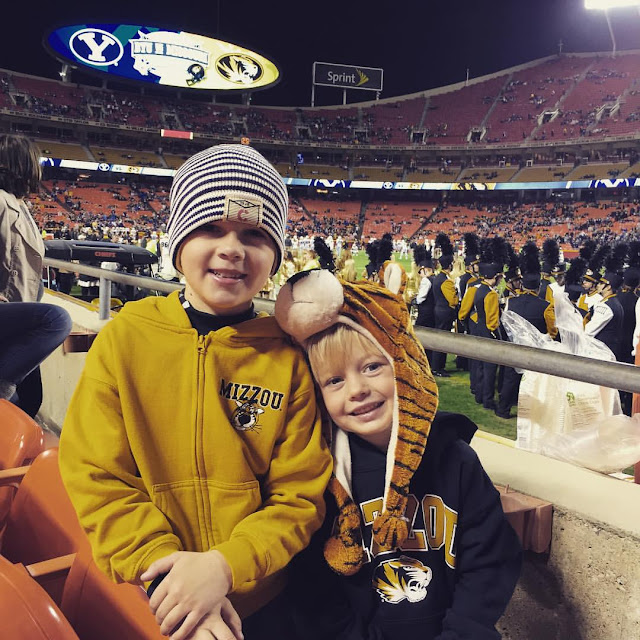 The boys watched for Truman the Tiger all night and was hoping that they could at least say hi and finally he started dancing his way to our side of the field and we made a beeline for the field. They were stoked that not only Truman gave them high-fives and fist bumps but that he photobombed them too. 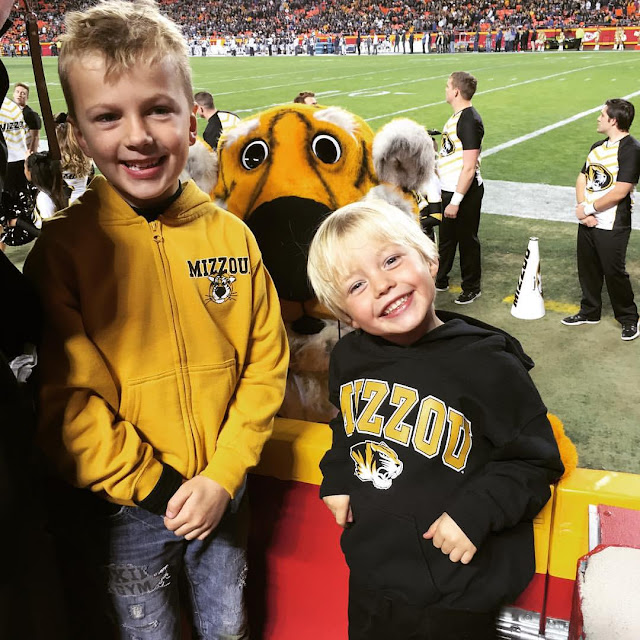 Their night was a officially made. The bucket full of popcorn that they devoured, the hot chocolate they got to drink, those were just icing on the cake. 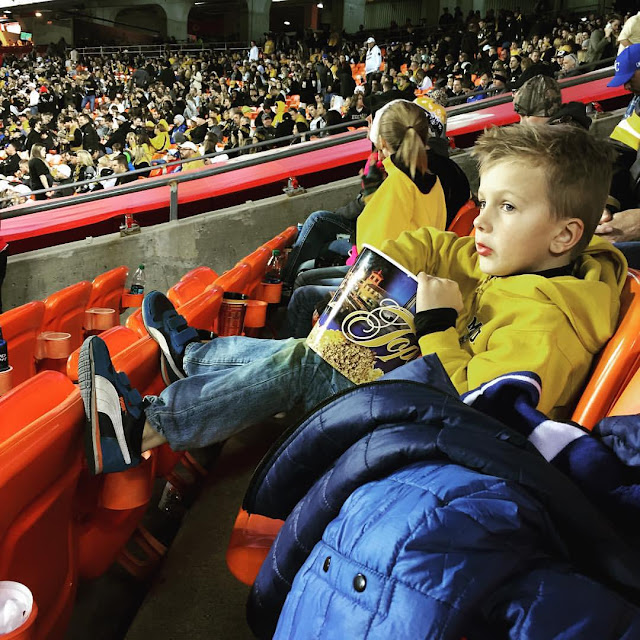 We didn't stick around for the whole game because Logan was beyond exhausted and frankly, so was I but we still had a blast supporting the Mizzou Tigers in their win against BYU.

Maybe next year we can venture out to a Chiefs game. Maybe.
Posted by Kayla South at 8:28 AM