Or at least it was now. Justin and I were kind of in a pickle when it came to game 6 of the ALCS, we had two tickets but yet no sitter. My MIL had plans that evening and logistically it just wasn't going to work to get both the kids from two different locations at different times and get them to someone else's home who wasn't yet off work. So I suggested to Justin that he go and take someone with him and I would stay home. He suggested we just sell the tickets. I didn't like that idea so I picked up the phone and called and simply asked, "How can we make this work?" Two minutes later I was buying two standing room only tickets for our boys---and we were both so excited for them to get to experience the playoffs.

When I picked up Logan from Ms. Brenda's I told him that Daddy and I had a surprise for him but that I couldn't tell him until we got home. He tried so hard to get me to spill the beans but I held strong. When we got home, he immediately ran into the kitchen and told Kaden that we had a surprise for them. They both sat down and I hit the record button on my phone---you know like how parents record their kids reaction to the big news of Disney World...

So then I started working on our new signs. I wasn't sure what I wanted to put on them but since Logan loves Mike Moustakas I knew I had to incorporate a Moose someway, somehow. So I got to work & half way through the MLB logo on Kaden's sign, Logan asks, "Hey, Mom. When are you going to color the duck?"

STIKE TWO buddy. Now back off, it's not a duck, its a funny looking man, Can't you tell I am trying here!

Luckily the next morning they woke up and could hardly contain their excitement. This was going to be a good night. 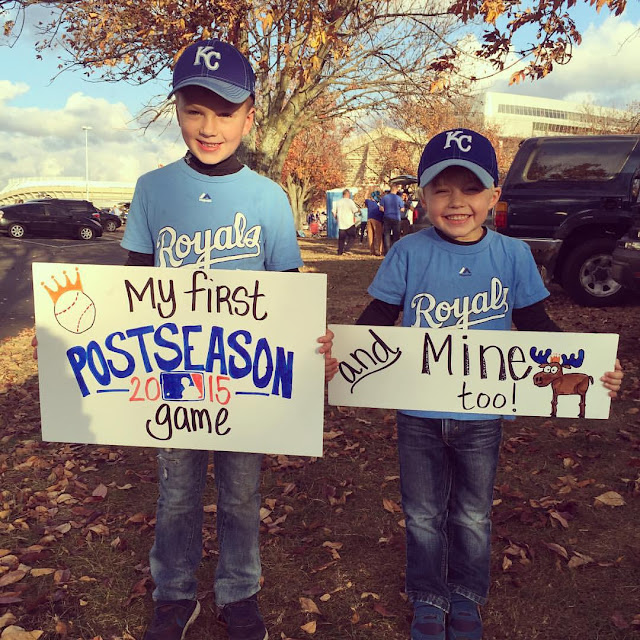 We decided to head into the game a little earlier than normal so that we could take the boys down to the field & watch a little batting practice before finding out seats for the opening ceremonies. On our way in I asked this very nice lady if she would take a picture for us & she happily did so. It wasn't until she handed my phone back that I realized she was a Toronto fan which actually means a little more that she would help us out. 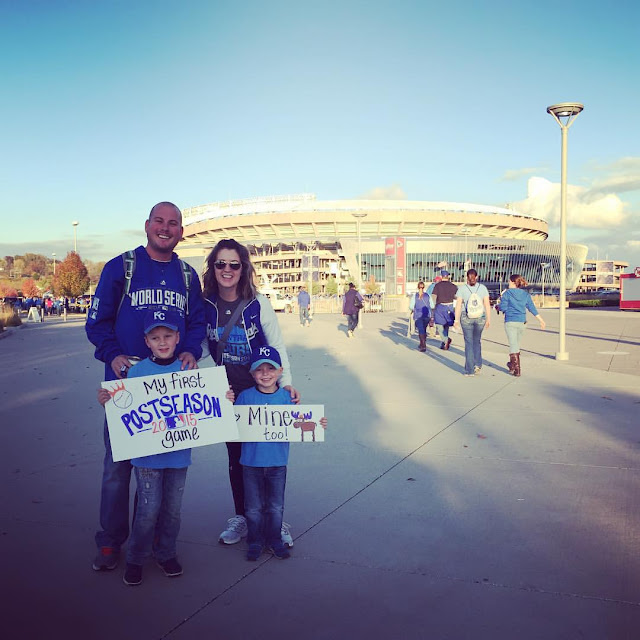 We even got lucky and got to see the Moose Mobile. I'm sure you have seen it and it's owner on TV during the playoffs---the kids thought it was the coolest jeep. It kind of is. 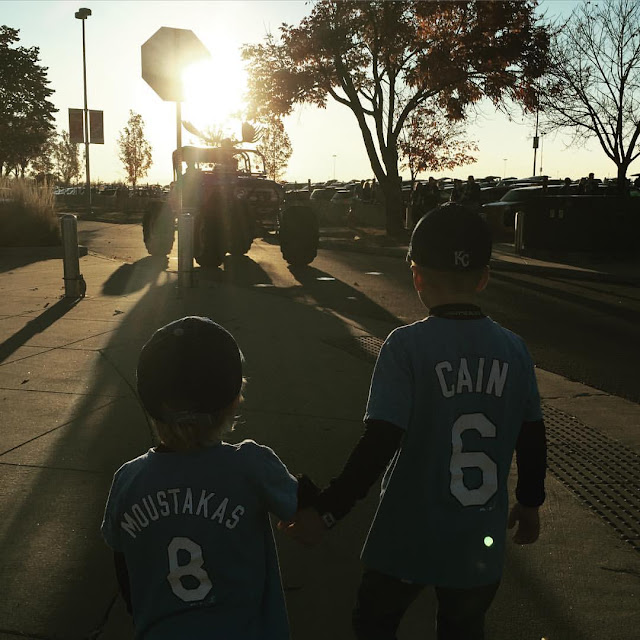 The boys were excited to get to our seats but I am sure they had no idea how high they were and how many stairs they would actually be climbing so talking them into going down to the field turned into quite the challenge. I managed though.

In my mind, I had it all planned out. We would venture down to the field, the kids would hold their signs up and they would get chosen as the "play ball" kids---I mean it was their first postseason game & they are freaking adorable!

But of course, it didn't happen. Maybe next time. 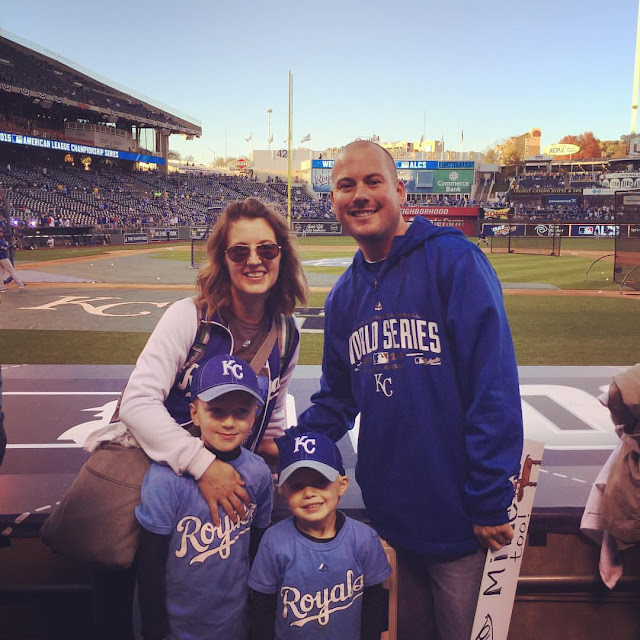 Once we got to our seats I started digging in my bag, Kaden's backpack. I had stuffed it full of snacks and treats so that after each inning the boys would get something new. This way, they stayed happy, we didn't have to spend a fortune on food & everyone got to watch the game without the "can I have cotton candy, frozen lemonade, peanuts..." & it worked like a charm. First up Big League Chew---we couldn't bring them to their first postseason game without some of the original! 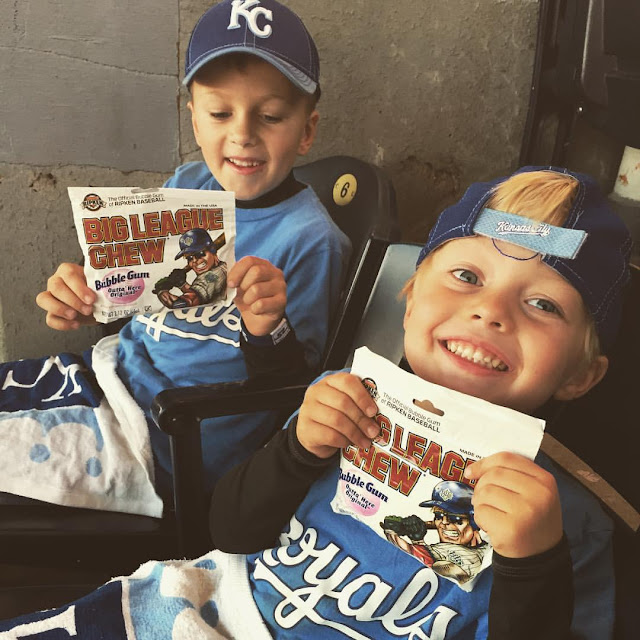 The boys were also fascinated by the idea of getting back on the jumbotron. They had been on it once before during the Karate Kick segment so they knew that at each half inning they had to pop up and hold their signs high. Even before the game started their faces appeared on Crown Vision. 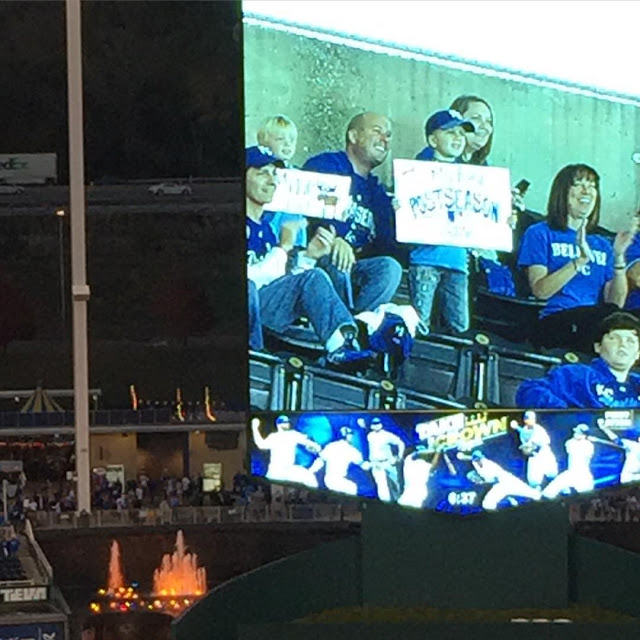 They would get on two other times before the night was over too but that still wasn't the highlight of the night. 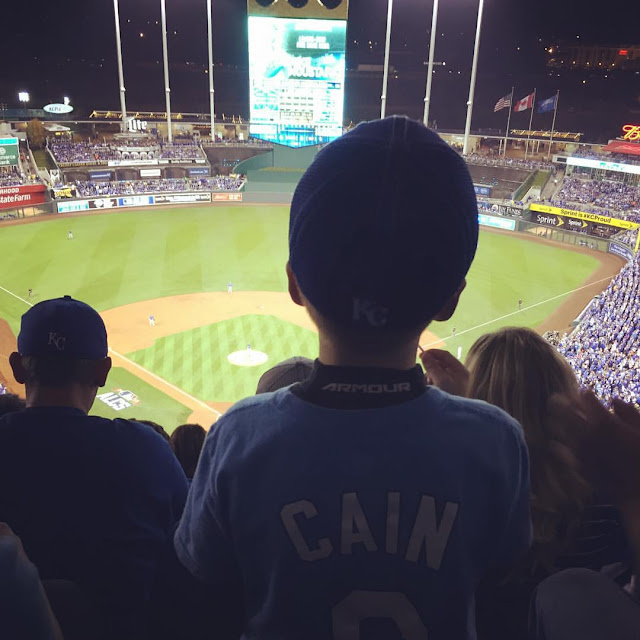 As exciting as it was to have our boys there with us, the game was just as exciting. We started off scoring a run in each of the first two innings--both homers, one from my new fave guy, Ben Zobrist, the other from none other than Mike Maustakas--Logie's favorite ballplayer. We were up against Price, who hasn't had a great post season but is one of the top pitchers playing today. We all knew it was going to be a challenge but we also knew, our Boys in Blue are ALWAYS up for a challenge, the thrive when their backs are against the wall---it's when they show the world what they are truly made of.

Unfortunately, the home runs didn't stop there, Batista hit one in the 4th to make it 2-1 Royals and a few innings later we were able to add an insurance run, Royals led 3-1. The Blue Jays were quiet for a while but then Batista as up again and once again we watched as he hit one out the ballpark but this time he had a man on. Wader came into finish out the inning for us but now the game was tied. & then the rain came. 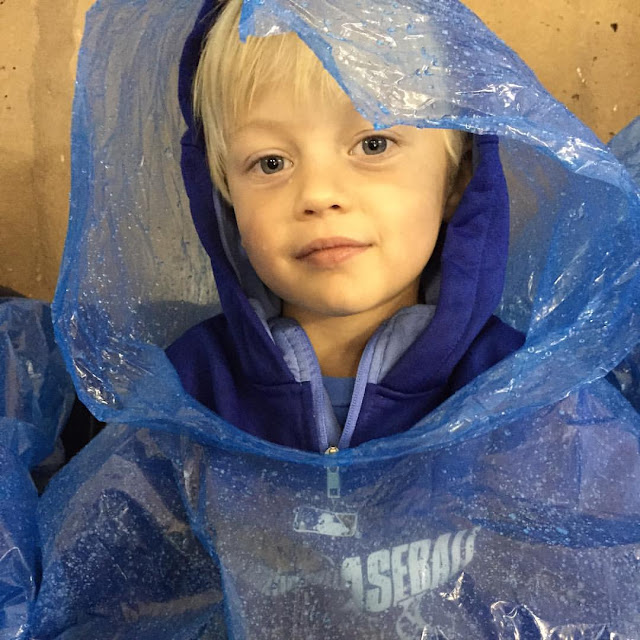 Things weren't looking so great---game was tied, we had just given up a two run homer and the momentum was turning to Toronto. Davis had done his job in the 8th but now what---he had a 45+ minute delay to worry about.

Finally the tarp was coming off and the Royals were up to bat, we needed one. Never give up--that's been the anthem all season long so why would it change now. The stadium was on their feet with Cain on first and Hosmer up to bat, this is why he sits in the #4 position, our "clean up" hitter, to drive in runs. With a crack of the bat the ball went to right field where none other than Batista was chasing after it. Cain rounded second, headed to third and wasn't slowing down. Jerschele was waving him home---on a single--yup, Cain can fly & with one swing of the bat we were back on top, 4-3. Hosmer had no clue what had happened until he looked around to see what all the chaos was about and saw his teammate jumping up from home plate in triumph. What a play. But it still wasn't over, we had three more outs to record and Davis stepped back out on the mound.

I look over to my right and found this... 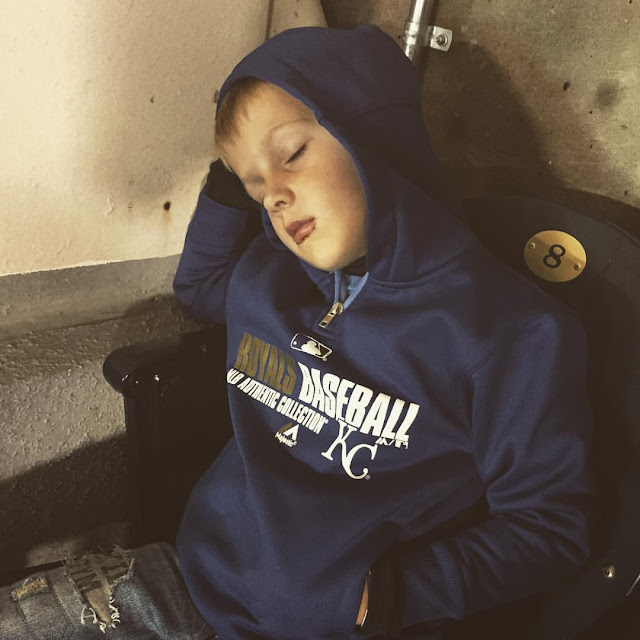 He tried so hard to hang on. How he was sleeping in a stadium of 40k+ fans is beyond me. He had just seen Cain cross home plate and was fist bumping everyone and jumping up and down with me. We decided to leave him and wake him up once we recorded the 2nd out which took a little while longer than we had expect. The 9th was full of tension as well, Toronto had two on--runners at first and third---with no one out but Wade dug deep & their hitters were no match of him. The game came to a close as Donaldson hit a ball down the third base line, Moose fielded it cleaning and fired it to Hosmer who recorded the out. Game Over. Our boys in blue were headed back to the Fall Classic & our city was erupting with celebration and pride. The stadium was rocking as the Royals flag was being waved and the make shift stands were being hauled onto the field for the presentation of the American League Pennant.

Justin and I decided that it had already been such a long night for the boys that it would probably be best to get them home and tucked into their beds. We made our way back to our car and got them loaded in. I was certain they would be asleep by the time we made it out of the parking lot but no, they were wide awake as we pulled into the garage and wanted to stay up a little longer. We told them to change into their pajamas, grab their lovies and meet us on the couch--we had some highlights to watch. And as they came back down the stairs I handed them back their signs, with one little tweak---Their first postseason game was a win! 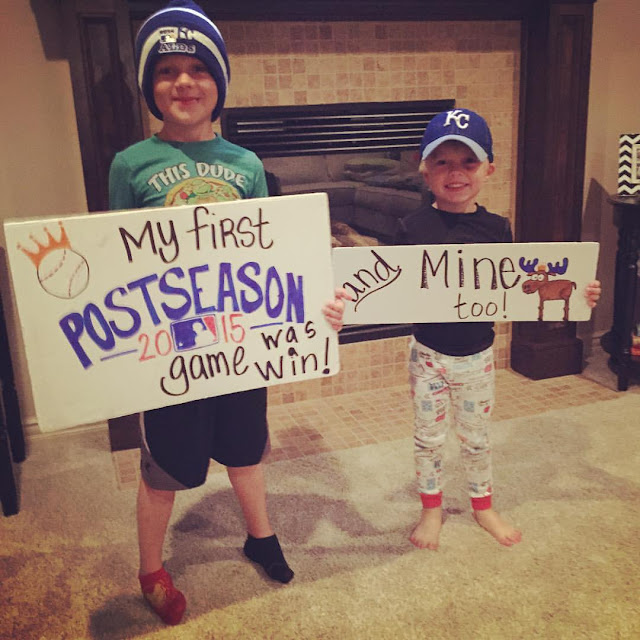 I am sure they really don't get the magnitude of this particular game but maybe they will when they get older. I am sure Logan will have a hard time remembering it but hopefully Kaden will have some recollection of being SIX and being at game SIX of the 2015 ALCS---an instant classic. And even if they don't remember the game, I know Justin and I will never forget it. We will never forget sitting in last row of section 421 with our boys. This will easily go down as one of our best family moments & we will get to talk about this for years, scratch that, decades to come. This is why we took our boys to game 6…for smiles like this. 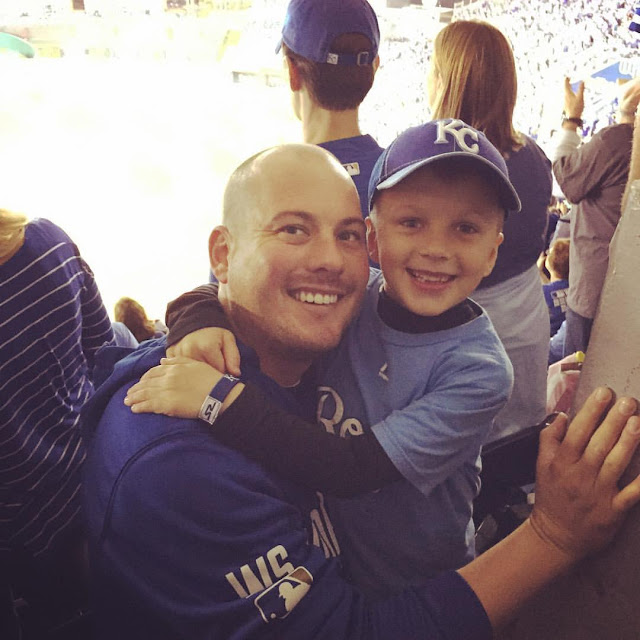