Since Parent Teacher conferences were scheduled for Game 5 of the ALDS, I decided to take one for the team while Justin and his brother went to the game. It turned out to be an EPIC game, Justin even compared it to the Wild Card game last year---how dare he!

I figured, if we won, great, I had a few more games that I could attend and if we lost, well I wouldn't want to be there anyway. We thankfully won and of course I was bummed I wasn't there---I'm not sure I have ever felt so much electricity in one place as I did at the Wild Card game and would have loved to compare the two.

Anyways, since Justin and Adam went to game five, I thought it was only fair for me to ask Becky to go to game two and have a girls day. The weather was pretty fantastic, it was a little nippy in the shade but nothing a stocking hat and some gloves couldn't handle. 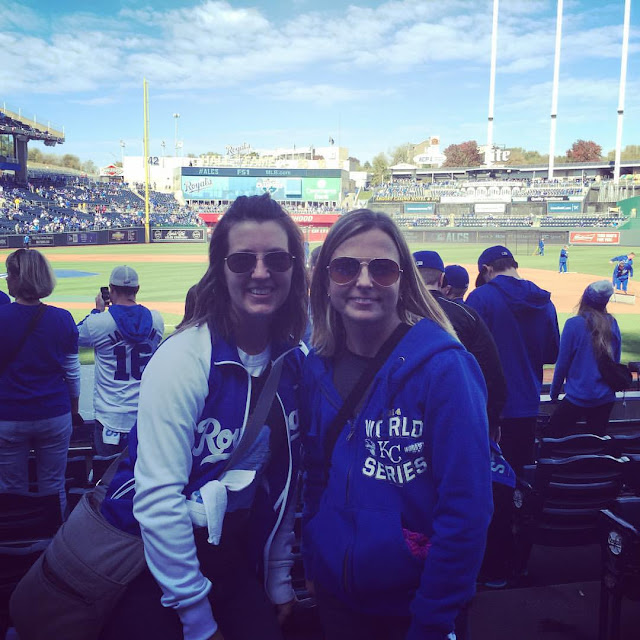 We were once again in the upper deck but we arrived early enough to go down towards the field. We handed my phone off for a picture but of course he didn't get the crown or the ALCS logo in the shot---should have brought my selfie stick!

The game was honestly, pretty boring, it almost seemed like a regular season game which is sooo very sad. It wasn't until about the 7th inning that things started to get a little more exciting and the Royals mounted yet another come from behind victory. The crowd didn't get as loud as they were the night before but I am certain they helped keep the momentum going! & it sounds like we may have been responsible for the Batista/Goins dropped ball. & let me just put it on record, Batista is not my favorite player, he could really use a few lessons in what it means to be a role model, a kind individual, a man.

Another game. Another win. Now its on the road to Toronto. Fingers crossed we can finish it out there but if we can't, at least we can clinch it here at The K.
Posted by Kayla South at 11:23 AM