Daddy and Logan were at the game where the Royals clinched another playoff, it was their boys' night. Logan lasted the whole game and I was certain he would fall asleep on the way home but nope, he was jabbering like crazy when I met them at the car to carry what I thought would be a sleeping little boy to this bed. He could stop talking about the game. & sadly for him, that would be the last of the games he would get to attend at the K this year. At least he got to go out on a high & will always know he was there, at. that. game. 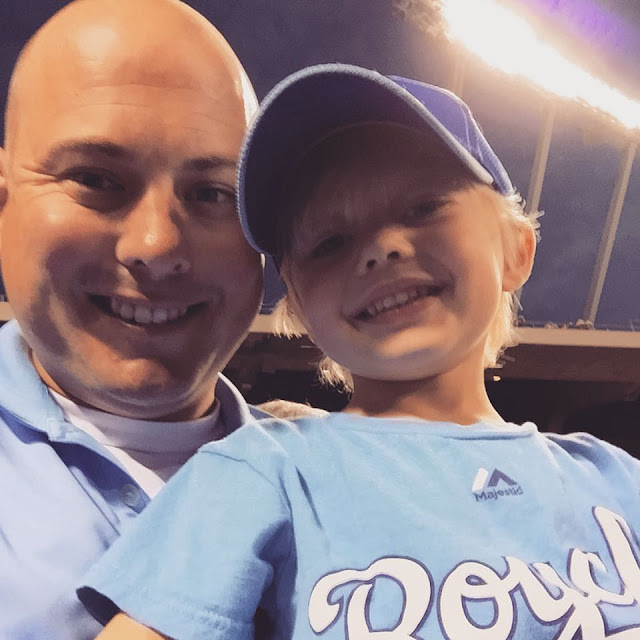 Fast forward a few weeks and we are prepping for the ALCS---each game day we do our best to wear our Blue proudly---it's the first thing the boys ask, "Are the Royals playing today?" and off to their closets they go to find their shirts. They may just be the cutest Royals' fans yet. 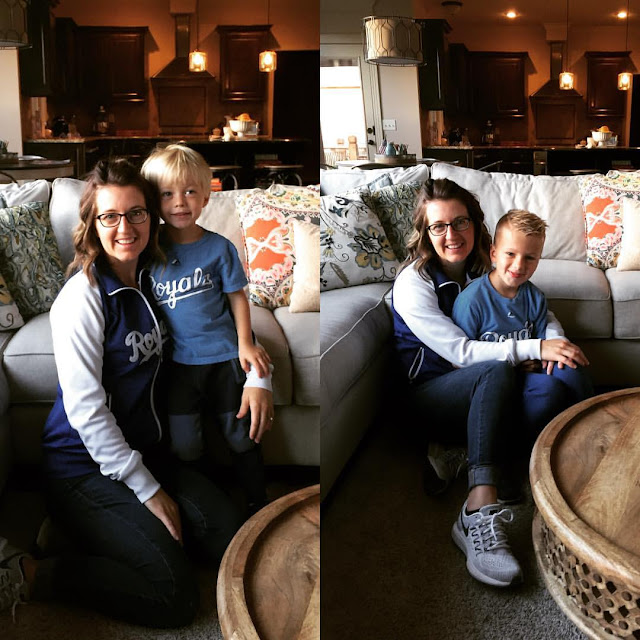 Thankfully, Grammy Janet was willing to watch the boys while Justin and I attended the game. We did leave specific instructions for the boys though, when the game came on they could stay up and watch as long as they are watching the game and more importantly, letting Grammy watch the game. They could play their 3DS or with their iPad but they needed to settle down and watch the game and cheer on our Boys in Blue. We would later learn that they were ANGELS---but we already knew that right!

Justin and I made one detour on the way to the stadium and that was to pick up dinner. We thought a little Joe's Kansas City would go perfectly with our beverage of choice and a Royals win. We were right. 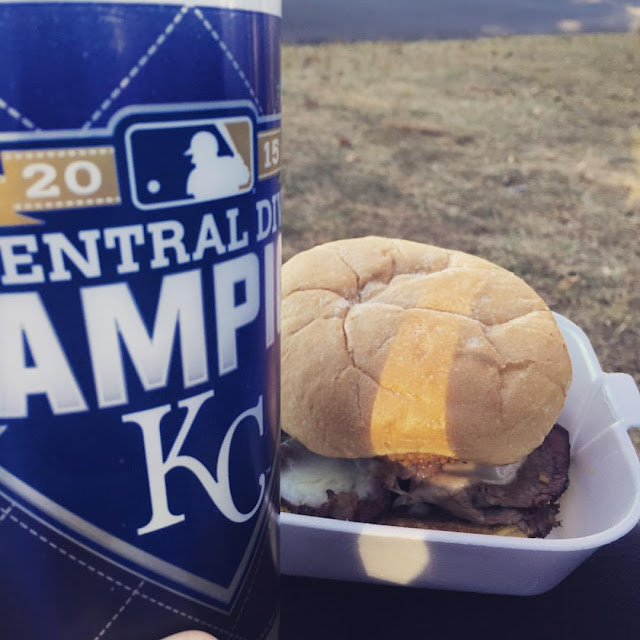 And on the way in I ran into my high school basketball coach, Coach Ihm. I have seen Coach Ihm out here a handful of times and this time, we just had to get a picture. I played ball for him 3 out of my four years in high school so it was nice to see him again. 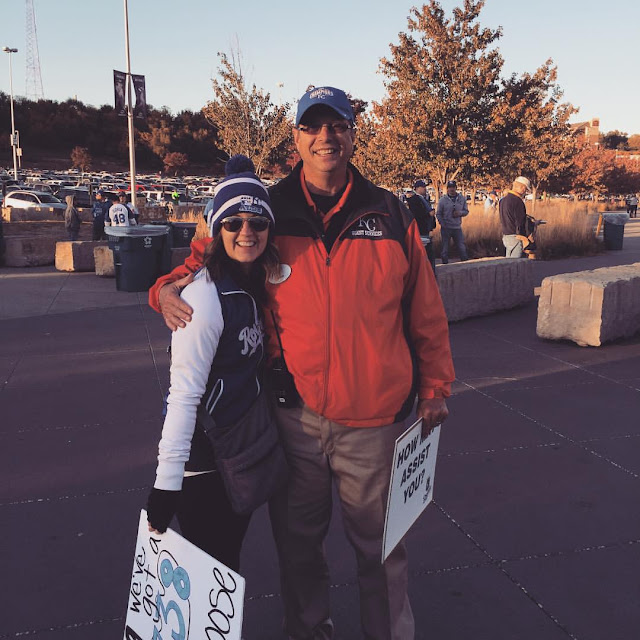 Justin and I decided to buy the 10 game package towards the end of the year and put a deposit down on the season tickets next year for to ensure we would have tickets to every postseason game at The K. For game 1 of the ALCS, we were literally sitting in the last row, but it was behind home plate and honestly, it was a great view of the stadium & more importantly, we were there. & will be there for the rest of the Royals' run. 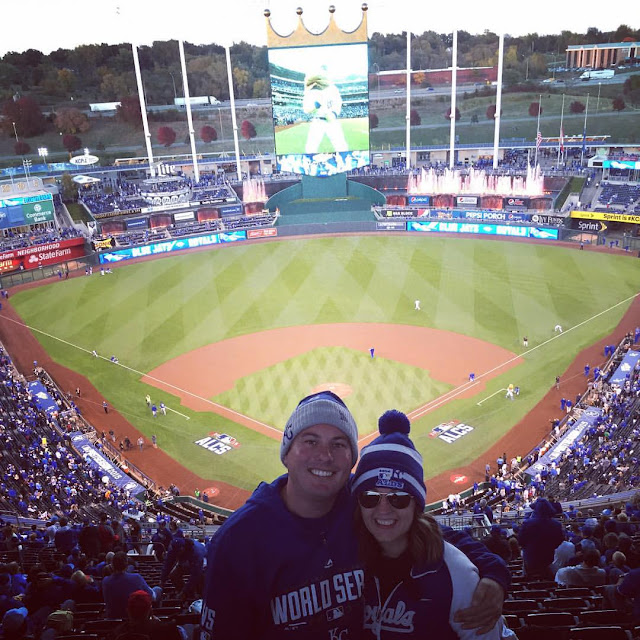 See--a great view. & don't worry, this was during O Canada, not our Star Spangled Banner. ;0) 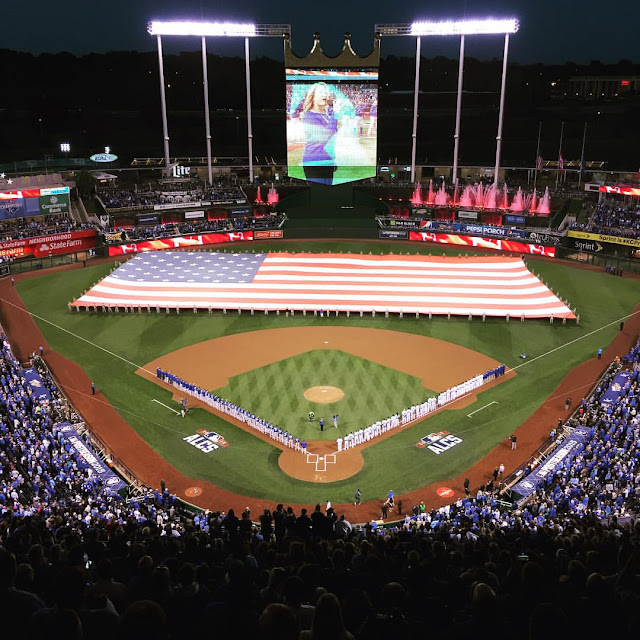 After a few innings of sitting at the top, our friends invited us down to sit with them. They were just a few seats to the right of where we were but about 40 rows lower & that is when we made it on National TV, well Angela and my poster did. Thanks to all those who sent me a message letting me know they saw the sign! 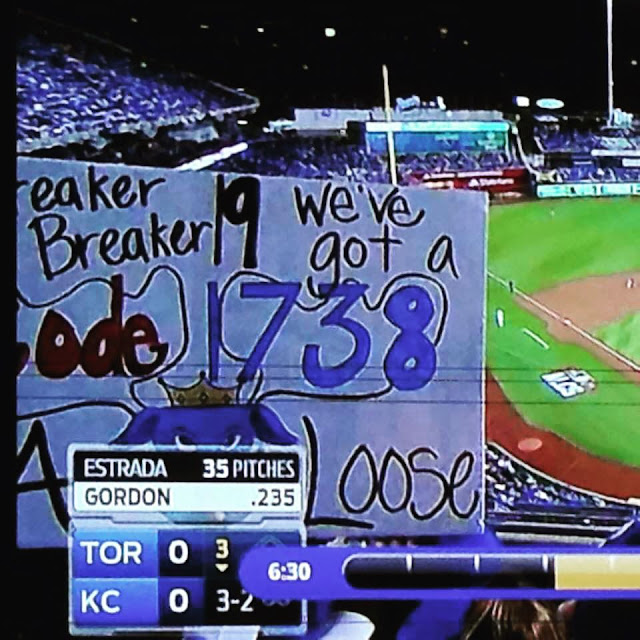 And right after they showed my sign on TV, the Royals went on a rally and started scoring. The night was looking pretty good. 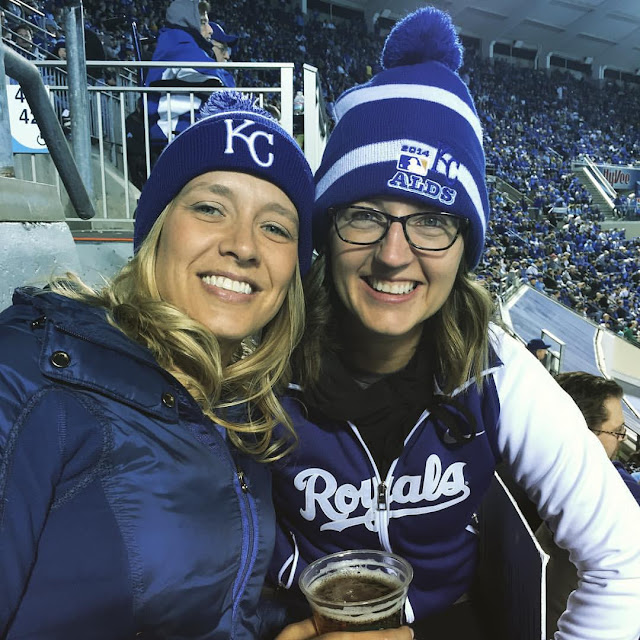 And these two cuties helped us get on the jumbo-tron a total of 4 times that evening! Not too mention, Hannah kept me warm and cozy for the rest of the game too. What a feeling it was to leave The K after taking game one---and it would only be a few short hours and I would be finding my way back to The K for game 2. 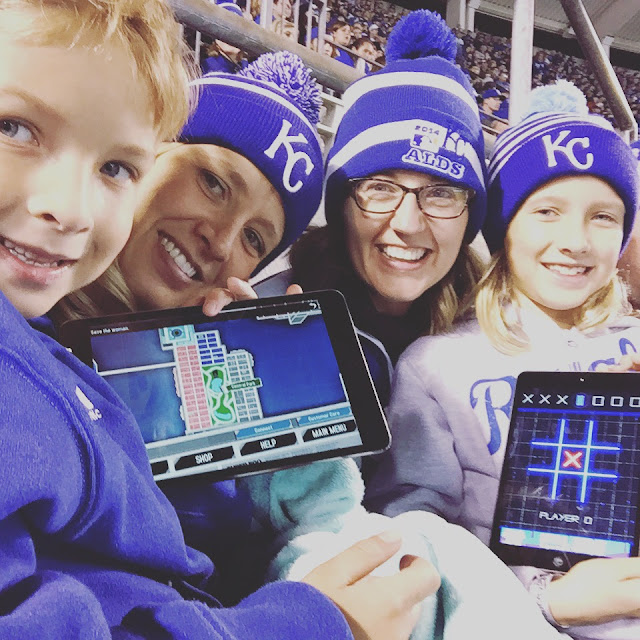