Halloween weekend was one party after another---two school parties and one at our house while we watched Game 3 of the World Series and then Halloween day and game 4 of the World Series the following day, so of course I did what anyone else would, I took the day off. It was just easier that way.

Logan's party was pretty simple & it was nice and early---unwrapped a few Hostess Halloween Cakes, 3 for $5 and we were in business. The party was total chaos but Logan had so much fun and the costumes were so cute. The best costume didn't belong to my son either---I know, shocker. There were actually two, one little girl was a taco and it was made out of felt, a yellow felt shell with lots of toppings! The other was our friend Abby, she was Toothless from How To Train Your Dragon and I looked and looked for a cute Toothless costume but couldn't find one, her mom sure did and it was darling! Don't get me wrong, Logie is as cute as ever but costumes just haven't been as much fun as they once were. 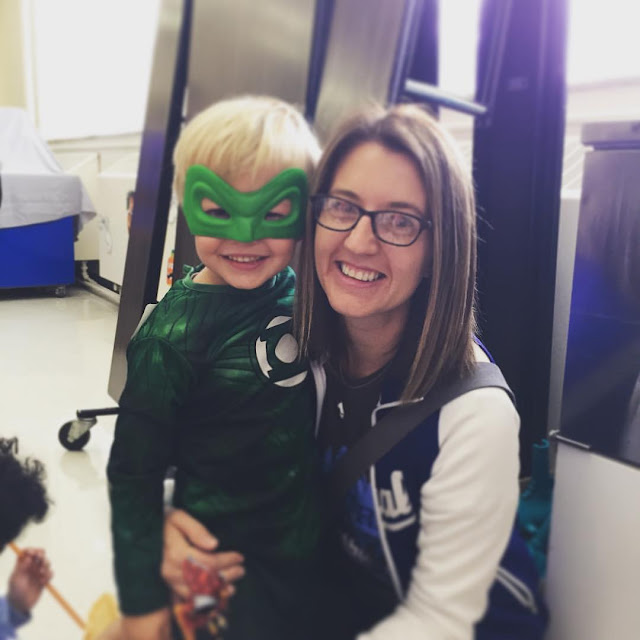 After Logan's party finished up I dropped him off at Ms. Brenda's and was off to do a few errands, bake a few cupcakes & get everything ready to go for Kaden's party. You see, I was somewhat nervous for Kaden's party--I am co-room parent for Kaden's class and this was our first rodeo. Fingers and toes were crossed for a fun yet uneventful party!

Like Logan, Kaden just had to be a superhero, he picked Flash. His costume ended up being a little small but way better than the 14-16 in boys that was sent to us the first time around. He was so excited to kick off his party with a school parade and of course the kindergarten classes led it off. 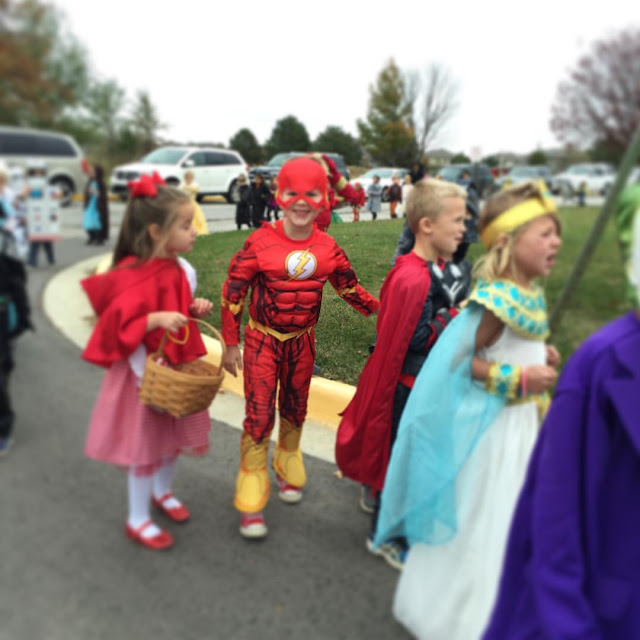 After the parade it was back to the classroom for Kaden's class party. They had treats---popcorn hands & chocolate covered pretzels with sprinkles. They did a cute little craft and made a little Halloween dude to go either around their necks or on the backpack and then they turned each other into mummies. Kaden loved this game. 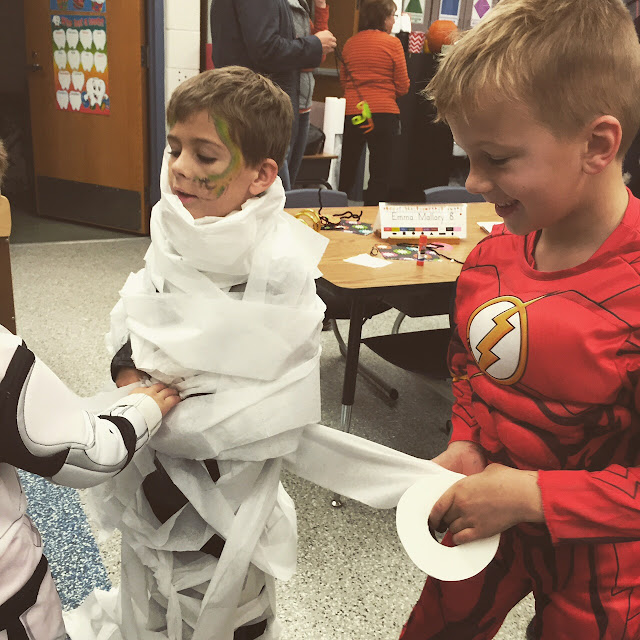 But our fun didn't end there. We still had a full night ahead of us with a little Halloween shindig at our house with all our friends and their littles. Oh and a Royal's game too--game 3 of the World Series. It was destined to be a great night.

When I first threw out the idea of a party at the house I had suggested doing one on Saturday around noon so that all the kiddos could see each other in their costumes and then they could head back home and tricker treat their own neighborhood. Then I thought, why not Friday night, guys and some of the mom's could watch the Royals, the kids could play and hopefully all sleep in on Saturday morning! So we moved it and everyone was still able to come.

I started looking at Pinterest for a few food ideas and the next thing I knew I was knee deep in an entire Pinterest menu. I worked in a few healthy options--banana ghosts, some pumpkin cuties & celery, witches brooms made of string cheese and pretzels. And then we had the other stuff---mummy dogs (a Halloween tradition at our house), monster pudding, Jello worms in Oreo dirt, & mummy cupcakes. & I found these cute orange skeleton goblets at Target in the $1 bin and Becky put together a fun little fuzzy drink for the kiddos. (& it's pretty tasty when you add a little vodka to it!) 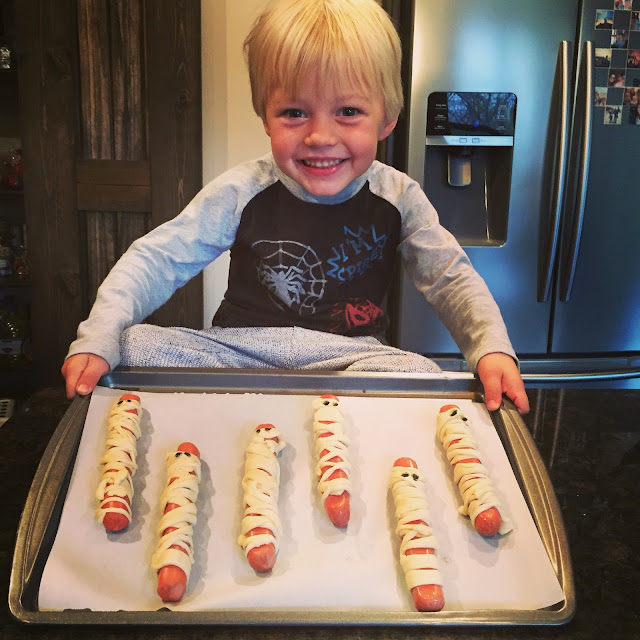 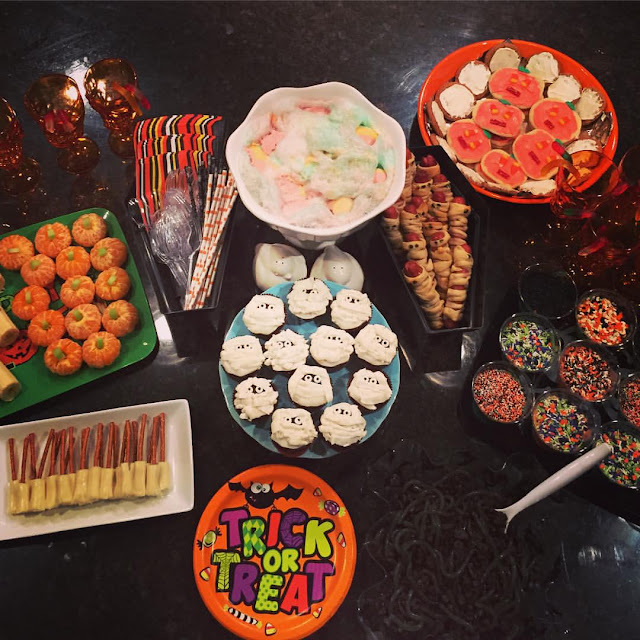 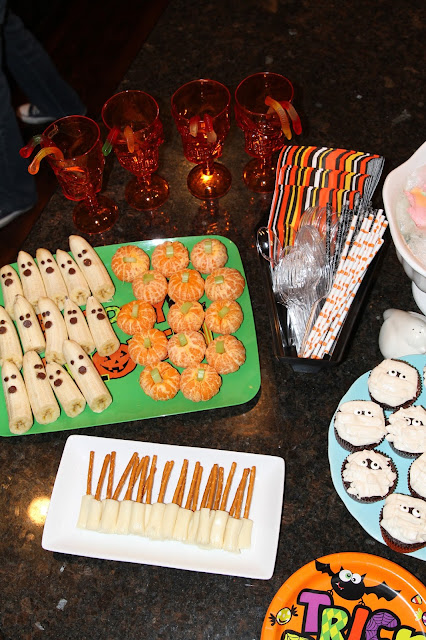 These worms proved to be the most challenging part of the menu & not to mention time consuming. You basically take 100 bending straws, tie them together and then pour jello with a touch of whip cream into the straws and let them set up. I kept thinking I wasn't doing it right because the liquid would start oozing out of the straw so I finally threw up my hands and just said let's see what happens. The next day I found them in okay condition & as I started to squeeze the jello out of all 100 straws I noticed that they weren't as long as I anticipated and didn't get the whole earthworm look I was going for. So if you plan on making these anytime soon---next Halloween---put the bending part of the straw at the bottom so you can get the rings on the neck of the worms.

Kaden asked how I got them to be this color, I used purple jello and added a little green food coloring so that they turned a little brownish-grey. And although they don't look too appetizing, they were prett yummy. 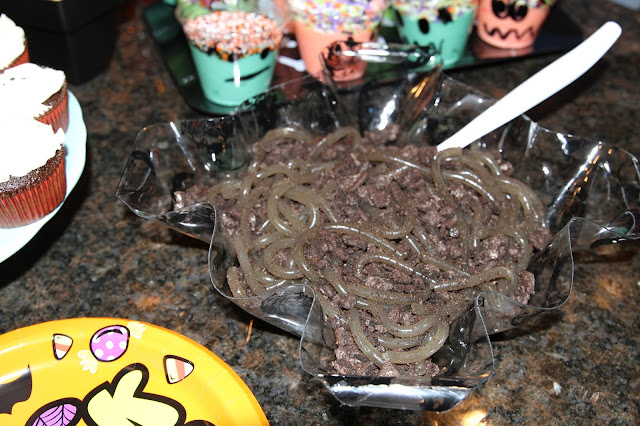 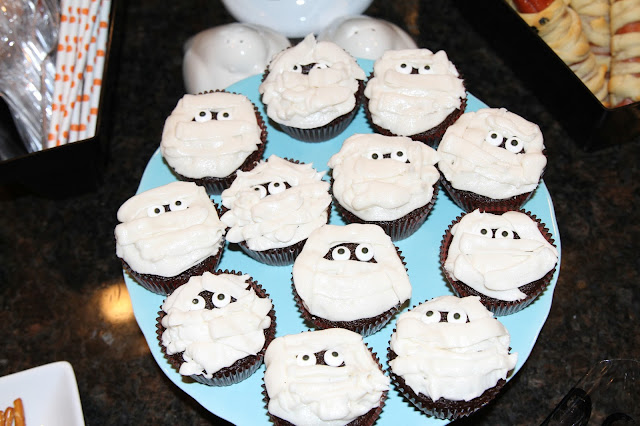 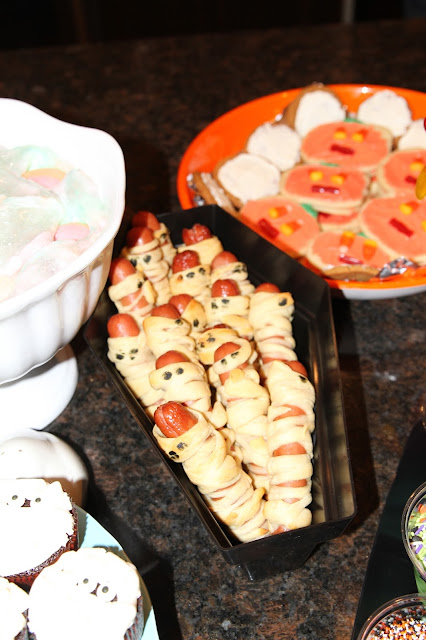 And look at this crew, we had---Diamond Steve from Minecraft, we had a little cowgirl who actually wore her mom's old costume, a cute little pink flamingo, a Minion, Minnie Mouse, Leonardo, two Super Girls, Flash and Green Lantern. What a cute bunch of kiddos! 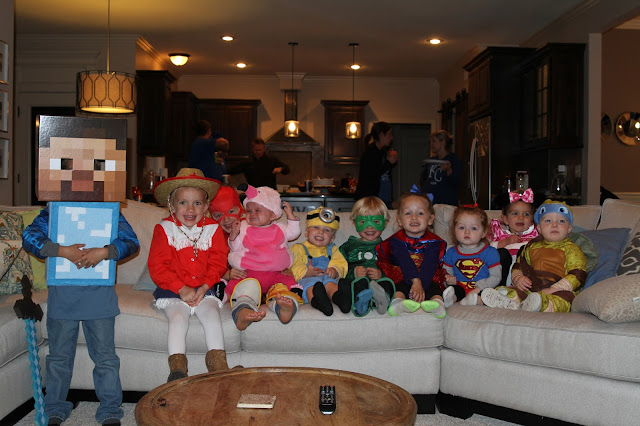 Cousin Colton's mom and dad built his costume, pretty sure it was one of the best looking costumes I had seen all day, even after seeing Kaden's school parade! 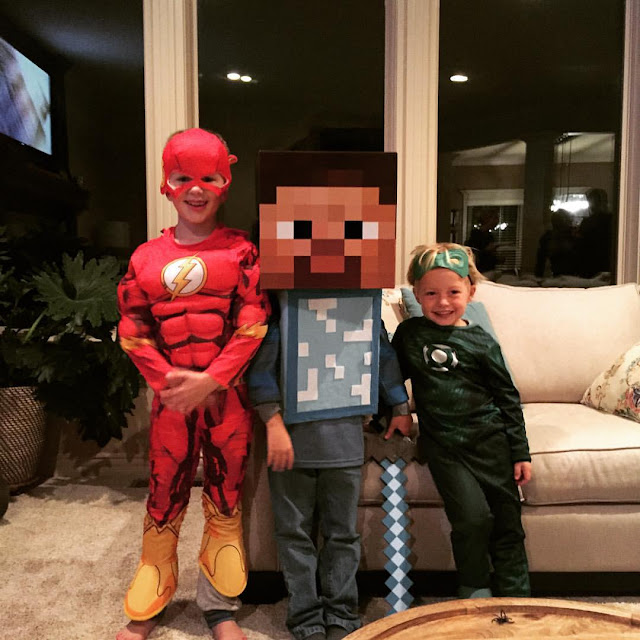 The rest of the evening was spent with kids playing in the toy room, in the basement with the guys, upstairs with us moms, they were everywhere but surprisingly we didn't really have too many issues, they were so good. The only time we had a slight issue was when Kaden and Lilly ran into each other, she stopped short, he kept going and poor girl hit her head. I immediately thought Kaden wasn't being careful and kind of sent him to his room but Tiffany assured me that it was a complete accident, so I talked with Kaden and he went and checked on Lilly. Thankfully she was fine, just a little bump but in a matter of time, she was up and back at it.

Tiffany took care of a few games for the kiddos and brought over Ghost bowling and Witches Hat Toss. It took a while for the kids to roll the pumpkin on the ground versus throwing it but either way it was so very cute to watch. 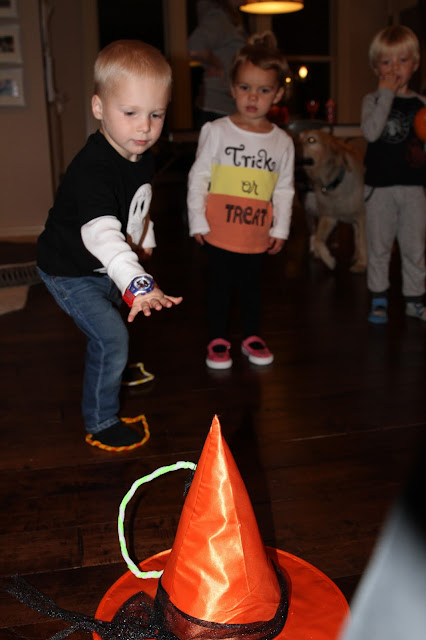 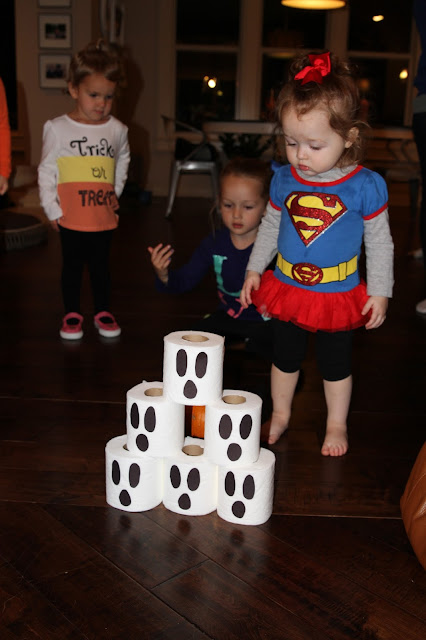 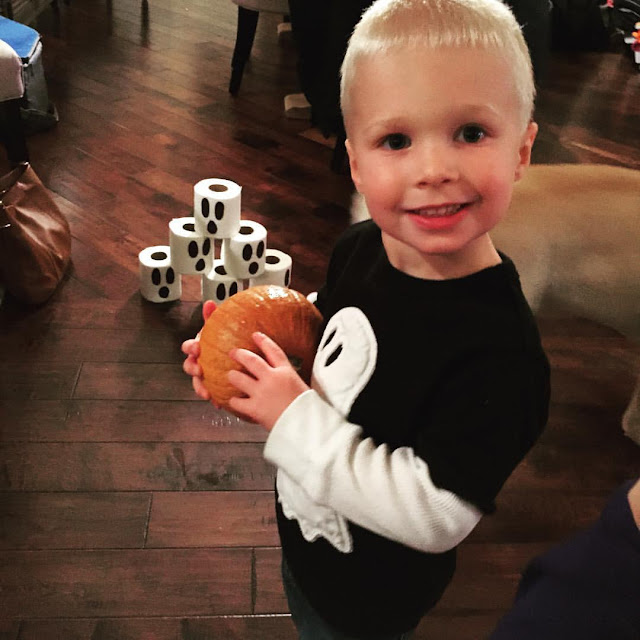 But the biggest hit of the evening was probably with our never-ending supply of superhero masks. Over the past 2 or 3 birthdays they boys have been able to compile quite the collection and the good news, each kiddo had their own and there was no fighting over which kiddo got what mask. Amazing. They seriously followed each other around for multiple hours, saving one another from the bad guys. 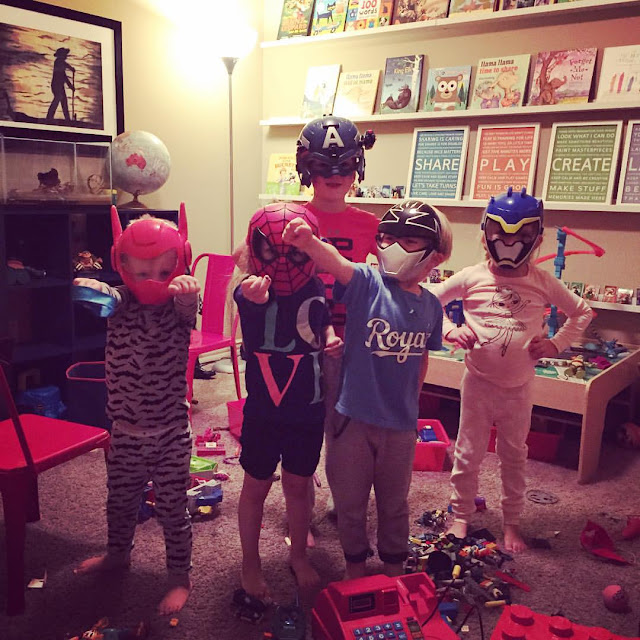 The only sad part of the evening, besides when everyone had to say goodbye was when the Royals fell to the Mets, game three went to NY but we still had a one game lead in the series---till tomorrow, we come back stronger.

The boys didn't really sleep in too much but then again, they never do. So we got up and decided to take care of a few errands & then make a special visit to a special friend. You see, we took our Superheroes to meet a few REAL superheroes, specifically our dear friend Scott. 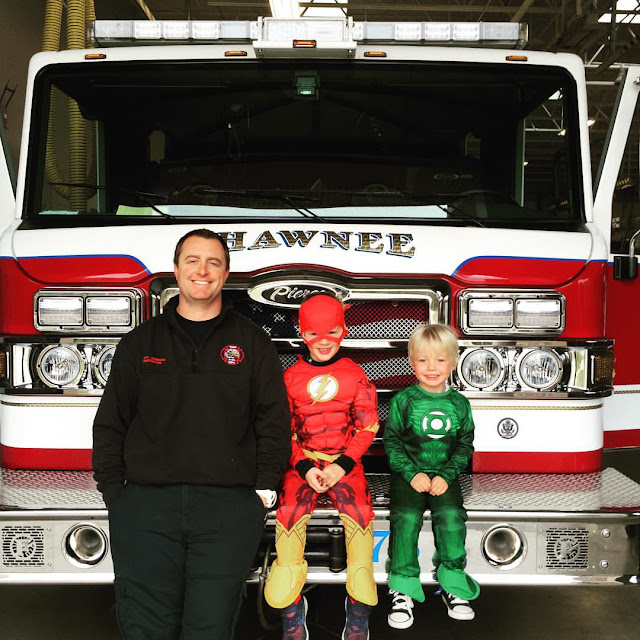 Scott gave the boys, Justin and I a tour of his home away from home. He even let the boys hop up into the firetruck and turn on a few lights. Their favorite part of the whole tour, opening the garage door by tugging on a little rope that dangled in the middle of the room. You could tell as they made their way through the fire station that they were looking for something---a fire pole and they quickly learned that not everything is as it appears on TV. Mind blown.

The day seemed to drag on for like EVER---kind of like this post---but finally it was time to head out to the neighborhood. The plan, stay in our little area of the neighborhood & be back by first pitch. 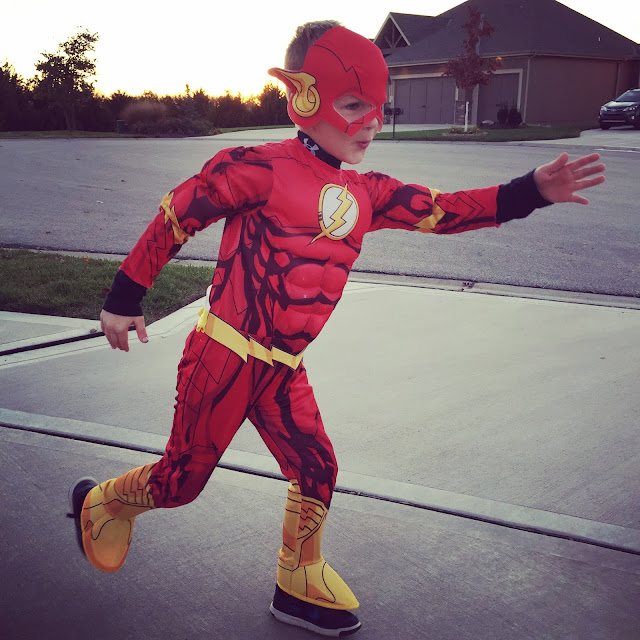 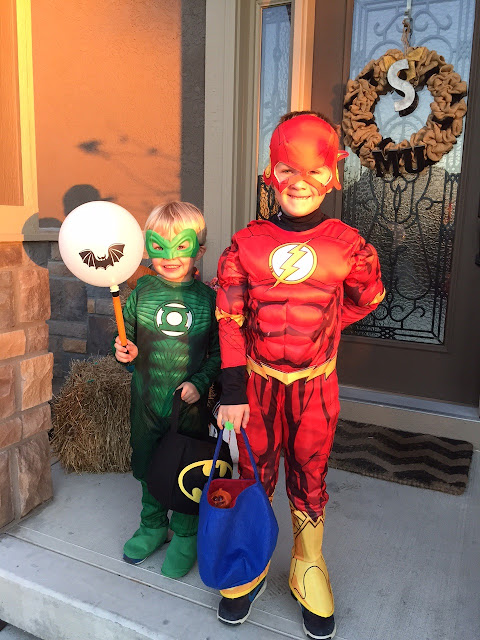 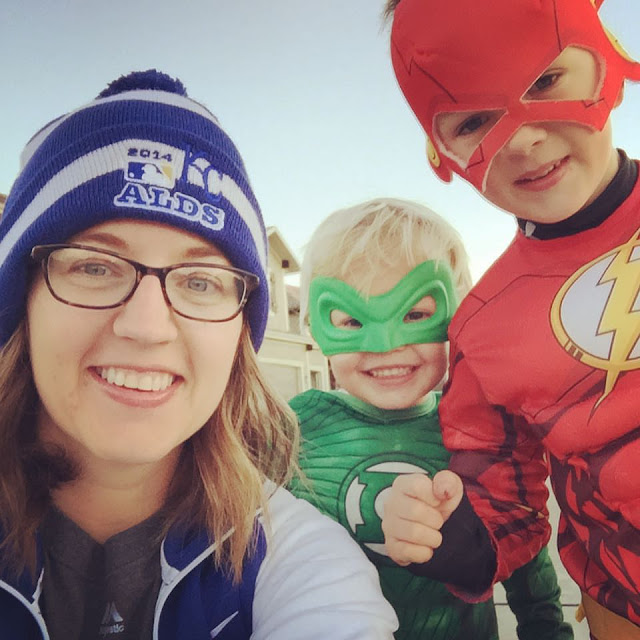 We ended up with the perfect amount of trick or treating. The boys seem to get into it more and more each year and although we didn't go to 30+ house, probably not even 15, they were beyond excited with the amount of candy they received. We did have a little mishap while trick or treating---Kaden forgot to say "thank you" so I told them both that if I didn't hear them say it, they would have to skip the next house. Well, Kaden forgot at one house so he had to stay back with me at the next house. As Logan was getting his candy and thanking the home owners, they told Kaden he could come up as well and he said, "no, I can't." and they looked at me a little puzzled. I explained the situation and they gave me an "Awesome, Mom. Way to go.".  And you know what, Kaden didn't forget again!

Once we returned home the boys told Justin, Janet and I that we could watch the game and they would handle the candy when trick or treaters came by. I honestly believe they enjoyed this part more than anything…they were on the look out. 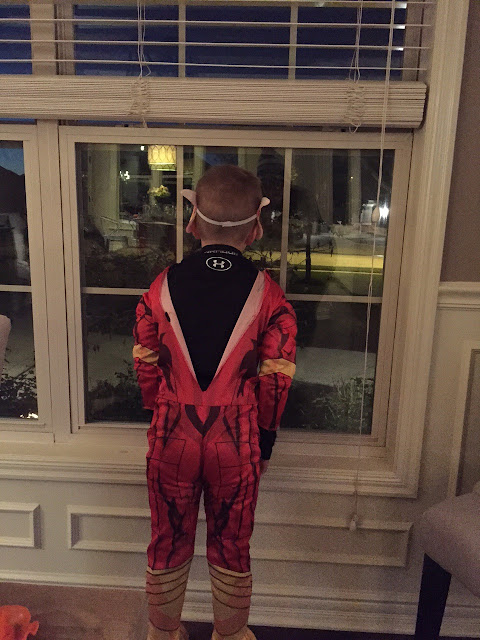 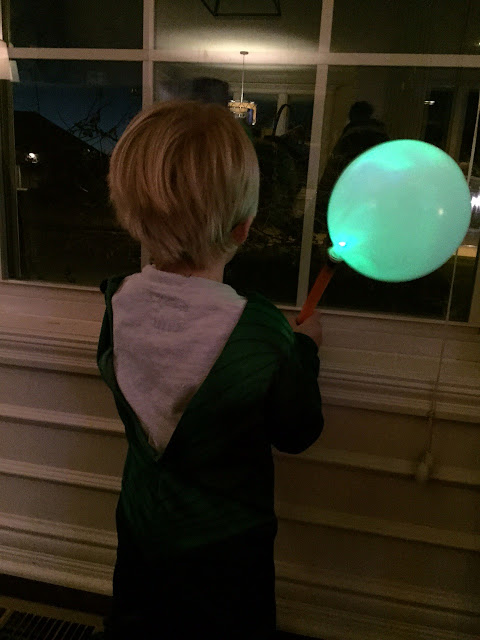 Since it had been a long night the boys only stayed up for a portion of the game, it wasn't looking all that great anyways but I promised that I would wake both boys up if we pulled ahead or if they woke up from us screaming they could come down.

Well in typically Royals fashion, we mounted a come from behind and our house got a little loud as we were just one, ONE, win away from being World Series Champions. Little Logie hadn't fallen asleep yet and rejoined us for the last inning as Wade Davis closed the game out for us, yet again. Kaden slept through the whole thing, couldn't wake the kid--I tried. But this kid, well, he was just as excited as we were---he knew what this win meant. 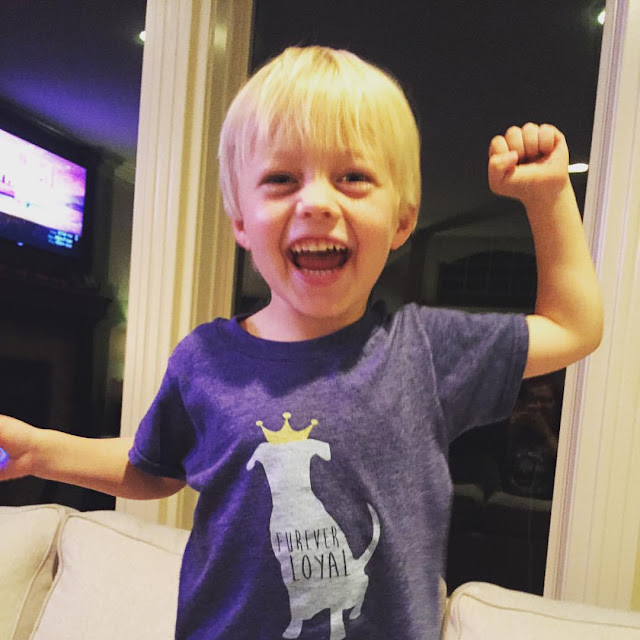