I did it! Did what you ask? I completed my first EVER 5k and to some this might not be that big of a deal but to me, it most certainly is.

You see, I have always HATED running. I just didn't get it, that is until now.

Less than 7 weeks ago I started my Couch to 5K journey and on September 6th I crossed my first finish line but I could not have done it without a few special people in my life.

First a little about Go Girl Run. It's held in 4 cities in the midwest---Columbia, Kansas City, Springfield and Wichita. If you run in all four you get a jacket of some sorts but I think you may have to complete the half to get that. Anyways, Sarah had ran the Go Girl Run last year and said it was a lot of fun and would the perfect race for my first run. Like the name of the race, it's mainly girls, there were a few guys but they were running as teams with their wives. Sarah and I were a team too--cheaper that way--Two Fun Girls was our name--I wasn't feeling all that creative at the time I chose our name. The race started and ended at Prairie Fire in Overland Park and the course had a good mix of slight elevation in the beginning but that would eventually turn into a little downhill action during mile 3 which was much needed.

It was a beautiful morning for a run and even though most of mile 2 was spent running into the sun, it still felt good. At the end of the race they present you with a medal and a wine glass which happened to be sponsored by Les Bourgeois which also just happens to be where Justin and I got engaged. & then you could stick around for the awards---we weren't getting any---and there were local food tents & vendors set up. Sarah was right, this was the perfect venue for my first 5k. 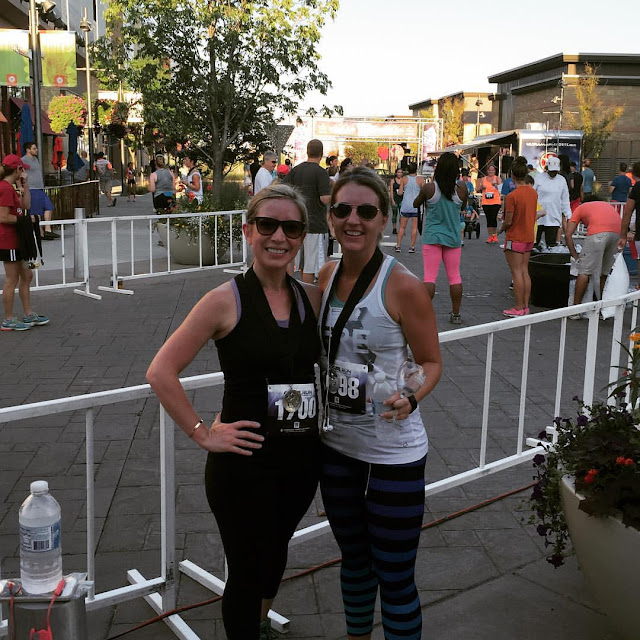 I decided to start running for two reasons. I needed something to challenge me & I was looking for something that would allow my mind to wonder and not worry about what workout rotation was coming next. Most importantly, I needed time to myself. I used to get this fix with photography sessions but since I am not really doing that anymore I needed to find something else. When I was doing my 21 Day Fix program about half the time I would do the workouts on my own and the other half I would have two little boys that wanted to do it with me, which was great BUT made things a little more difficult.

(To note, although my legs are a little more tone now that I have started running, I haven't really "lost weight", the 21 Day Fix program was WAY more of a workout, total body workout & I will certainly be including it in my routine moving forward here and there.)

So I downloaded the Couch to 5K app and went to work. At first I ran in the evenings but quickly I moved to early morning runs as the temperatures started to rise in late July. The program was perfect, it was exactly what I needed to get me motivated and to keep me working towards the goal I had set for myself. I won't lie, I looked ahead at week 5, 6 and 7 of the program and was like no way in hell am I going to be able to run for 18 minutes, 25 minutes and 28 minutes non-stop and I got a little discouraged but I trusted the program and I kept with it.

When those weeks rolled around, it just happened. I jumped from 10 minutes to 15 minutes to 18 minutes like it was nothing. I cruised passed 25 minutes and 28 minutes too. The only thing that was left was the 30 minute run & that 30 minutes felt better than any other workout I had recorded. Now don't get me wrong, there were days that I didn't think I was going to make it but my will to keep going was more than my will to quit. I can count two days where I gave in, one of them was the day before the race & I wasn't feeling 100%, not even 70% and could barely make it to 15 minutes before I was exhausted. The other, was plain laziness and I regretted not finishing & that kept me going the next time I started doubting myself.

From the beginning of this journey I had a few friends that really kept me motivated and encouraged & even answered my crazy running questions or listened when I needed to vent because I had tweaked my ankle again---thanks Helen and Sarah, your support made the difference.

& honestly, so did putting it all over Facebook & Instagram---I'm sure people were tired of my running posts but in a weird way I felt like I was being held accountable by everyone that was reading, liking, or commenting on those posts. I didn't want to let anyone down, most importantly myself.

My biggest and most important supporters were these two and their daddy, especially their daddy. After each morning run he would tell me how proud he was of my effort and dedication. He even brought the boys to the race so they could cheer me on as I crossed the finish line. He even caught it on video.


Yes, it was just a 5k but it was a 5k, that's 3.1 miles with a 10 minute mile pace. Something that I didn't know if I could do but with a little determination, support and competitiveness, I did it. I finished with a time just under 31 minutes & 7th out of 37 in my age division. & most importantly, I got a number of compliments on my new pants! & I may or may not have already purchased a second pair for my 2nd race which is right around the corner--The Waddell & Reed with Special Guest Ivy Funds (that's me) Marathon. I'll be the one in pink and teal pants this time! 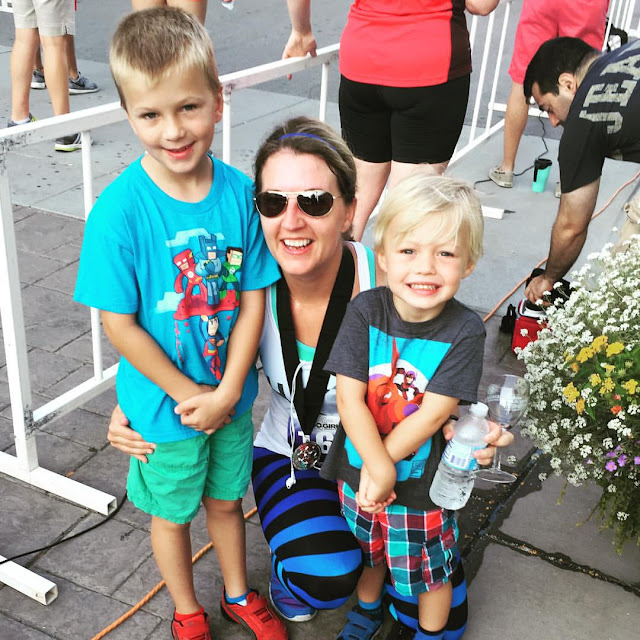