Over Memorial Day weekend our little family of 4 made the trip to Chicago with my parents to see the Royals play at Wrigley Field. We had tickets to only Saturday's game & Saturday's game was the only game that got rained out that weekend. We drove all the way there for nothing---well, not really, we still enjoyed the city and had a great time, just didn't get to see our Royals play.

We did get a raincheck though & it worked out pretty well because the game got rescheduled the game before the Chicago White Sox series so we turned our raincheck game into back to back games in Chicago--hitting both ballparks in two days. The sad part---my mom and dad weren't able to go because they were on their way back from vacation and Kaden was in school & we couldn't take him out this early in the year for three days. So we did what most people would do, invited my BIL and his wife and asked Justin's mom to watch all three boys!

She of course said yes, even after realizing that she had to get three boys to three different schools all by 8 or 8:15! No problem, she's got this! & she certainly was off to a great start with the boys, only three hours in and they were already getting ice cream. 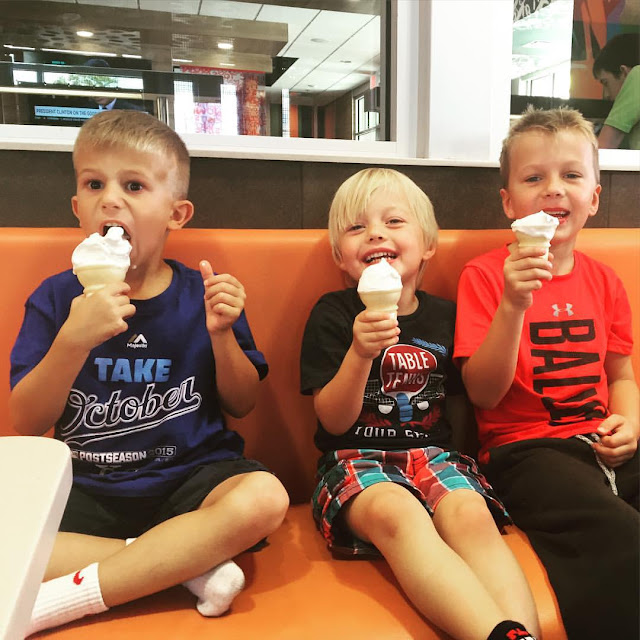 Meanwhile we were making our way through Missouri and then Illinois. One of my favorite things to see along the way are the windmills. The picture of course doesn't do it justice. 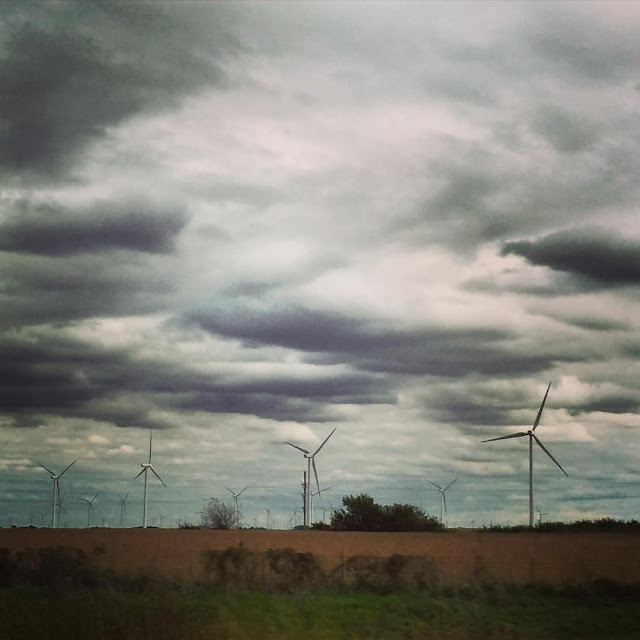 After 7 hours of driving---Adam drove the whole time, we finally saw the Chicago skyline. We were so ready to get out of the car and stretch our legs. 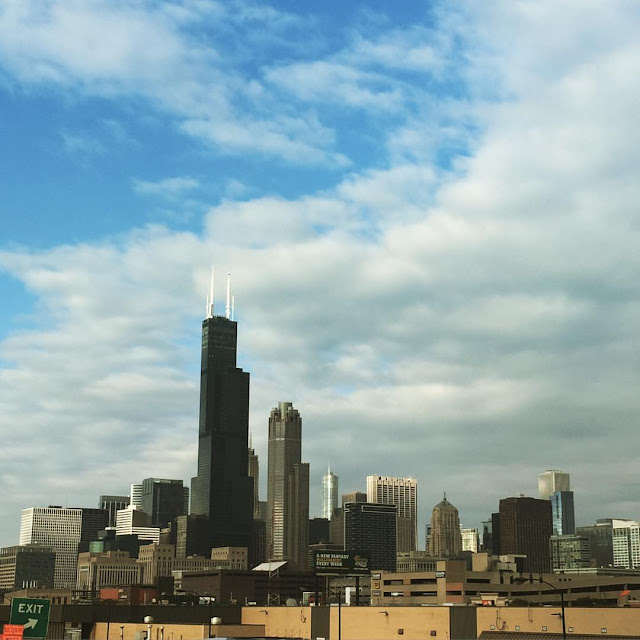 We immediately checked into our hotel and headed up to our room--1514 right? WRONG. They told us 1514 and our key worked for 1514 but there was already someone in there. We didn't stick around long enough to say hi and we also weren't very happy with the front desk. 1214 was what we should have had.

Once in our room we quickly got settled and then headed out for some shopping and then dinner at T.G.I. Fridays---I love their Sizzling Chicken and Cheese & mozzarella sticks and Becky loves their mashed potatoes--they are definitely the best mashed potatoes I have ever had. We were both pretty happy campers after checking off #1 on our to do list on our first evening---don't judge, there aren't anymore in KC any longer, the only place I get my fix is in airports and occasionally in Chicago. 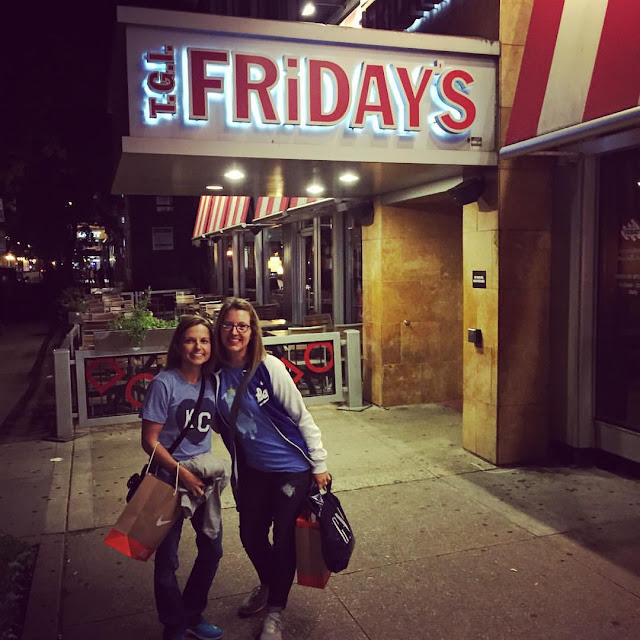 After dinner we headed out & about. The lunar eclipse that occurs every 30 years was happening that evening so we kept walking until we could find an opening in the skyline to see it. 10,000 steps later we found Millennium Park and the Bean. Another to do on my list checked off, besides seeing the Royals play at Wrigley, everything else was icing on the cake for me. 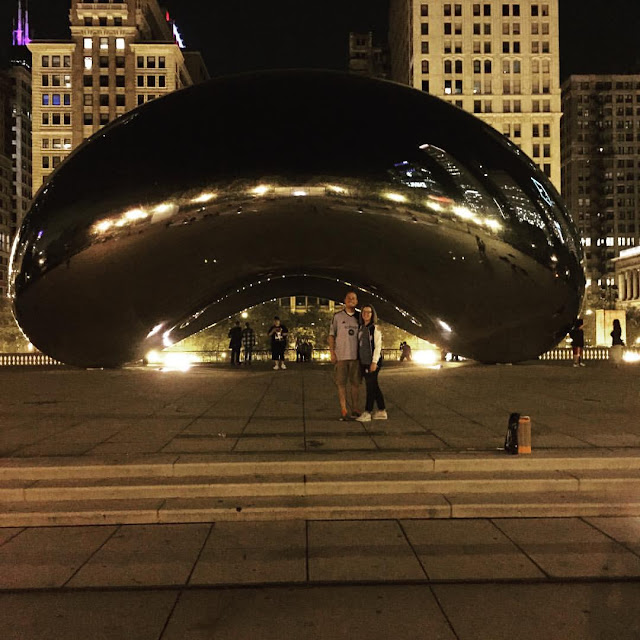 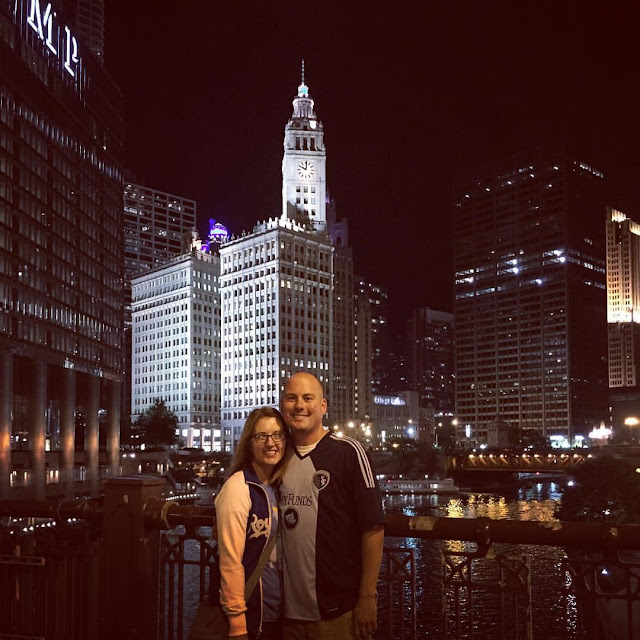 The next day we had most of the morning to kill. We did a little shopping and then we walked back to Millennium Park and saw the Bean in the daylight. We even made it all the way to the Navy Pier. It was barely noon and we were about 15,000 steps in already---our feet were tired. 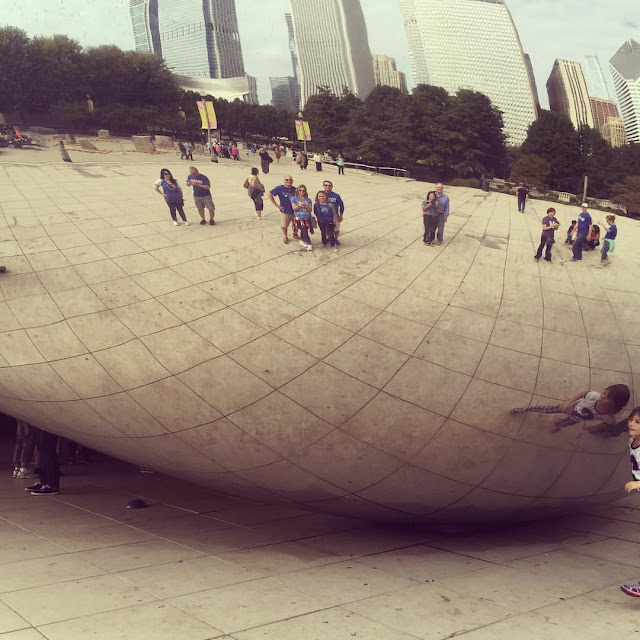 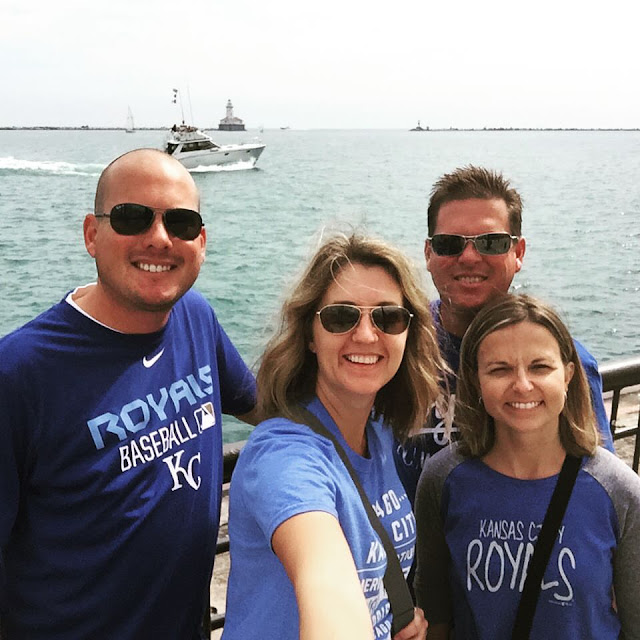 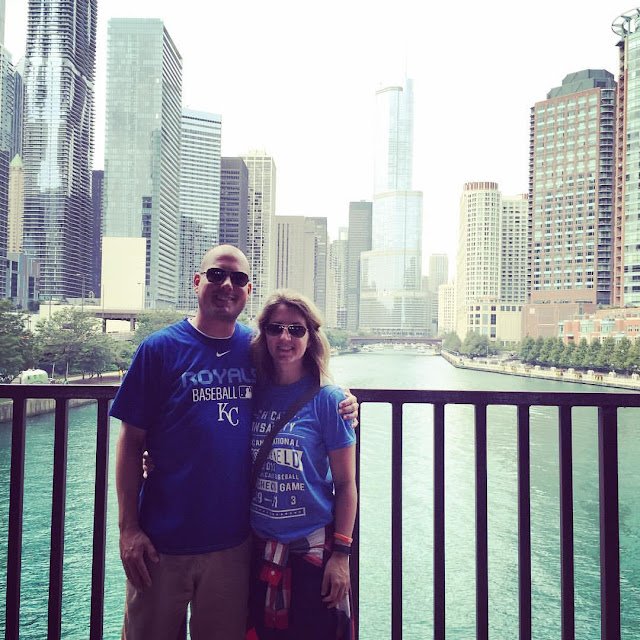 And then we hopped on the L and headed down to Wrigleyville, found our way to The Corner Bar which is where we sat while it rained the last time we were in town. We had a few hours to kill before the game which meant a few drinks and even talked Becky into taking a shot with me. 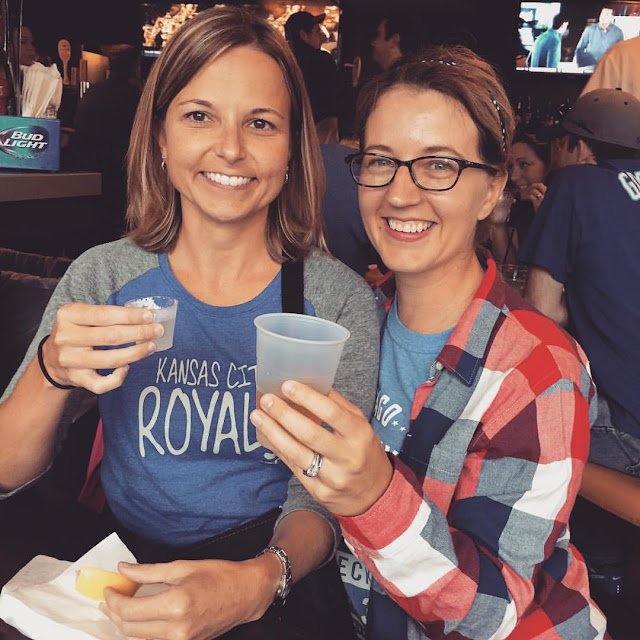 & then it was time to head into the game. Becky and I made it down to the field as batting practice was ending & asked a fellow Royals fan to take a picture for us---it wasn't hard to spot one, we were everywhere! 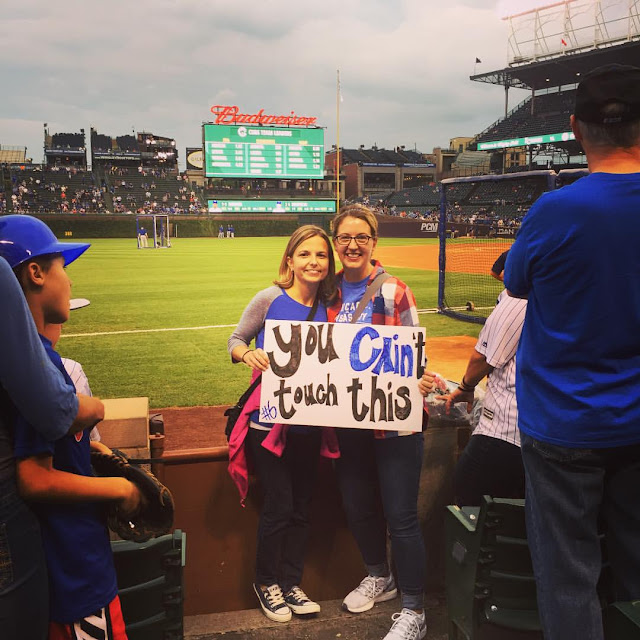 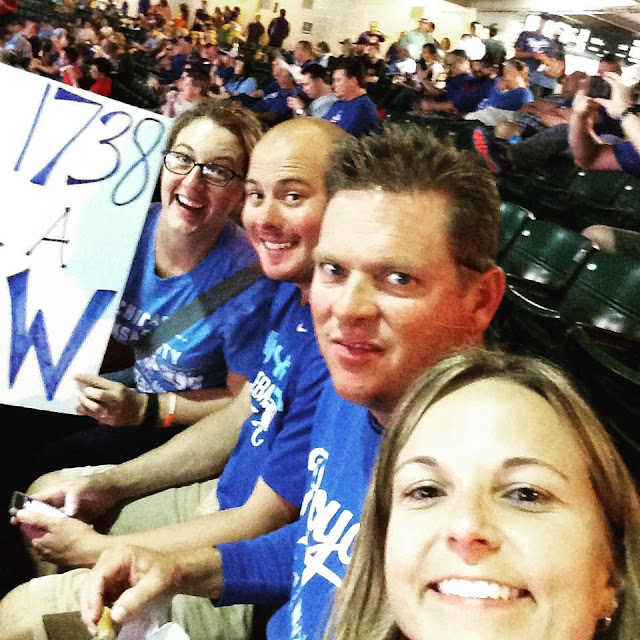 We left Wrigleyville a little sad because of the loss but thankfully are hotel was right off the L and we were back to our hotel in no time. We got a good night sleep and woke up to a little bit of rain and about a 30 degree drop in temperatures. We weren't really prepared for this weather so we made another pass down Michigan Ave to a few shops. Justin's favorite was Eataly... 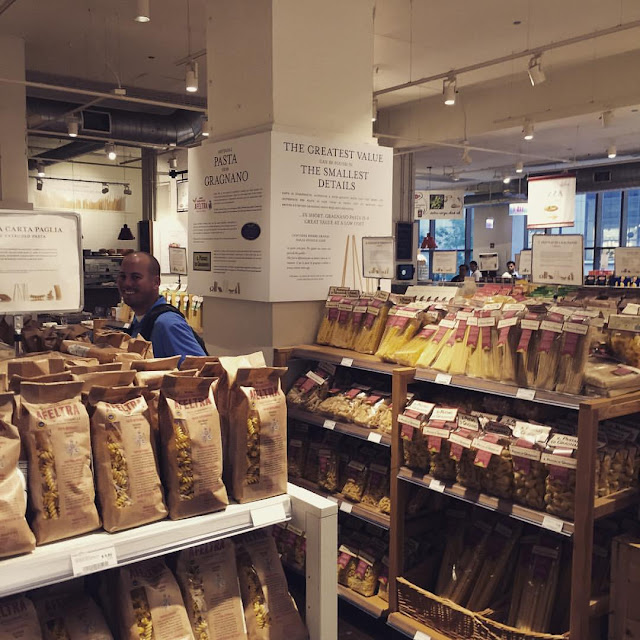 We had a lot of time to kill this day so we made our way to Gino's East for lunch and on our way back we saw Omar Infante shopping so we kept walking around to see who else we could find. & while I was shopping in Zara for the boys, Justin texted me that Escobar had just walked in so Becky and I went on the hunt. We figured he was in the Men's section so we acted as though we were looking for our husbands and then started talking to him. I wasn't going to ask for a picture but luckily Becky did! 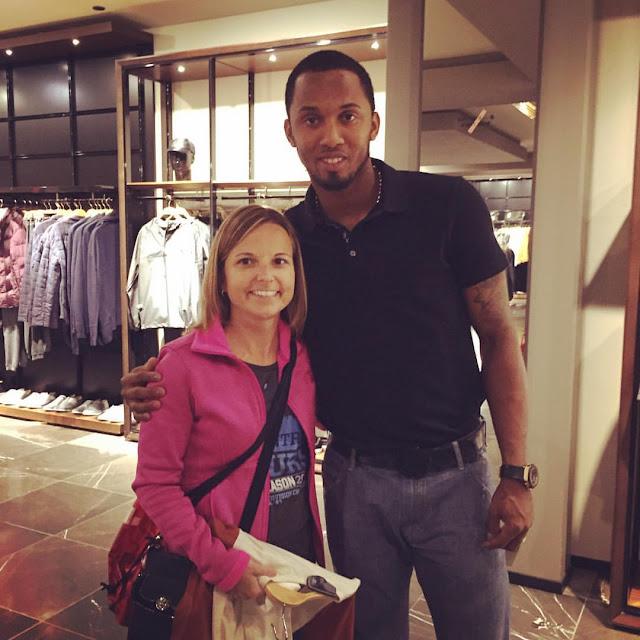 We finished our shopping, loaded up the car and headed out to the White Sox Stadium. We had been told mixed stories on what to expect. We were told that it wasn't that great of a ballpark but that the food was way better than Wrigley and they were partly right. 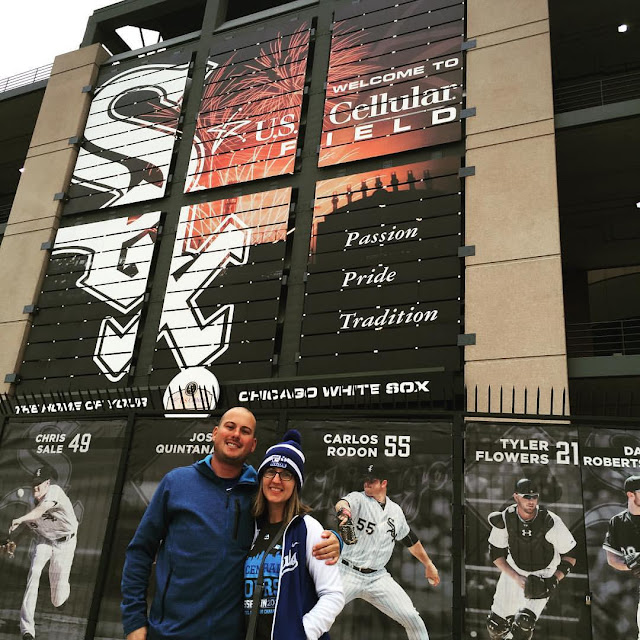 The food was WAY better than Wrigley, it was actually hot but the field was great. There were no White Sox fans to be seen, Royals' fans easily outnumber them 2-1 which allowed for our okay seats to become great seats. 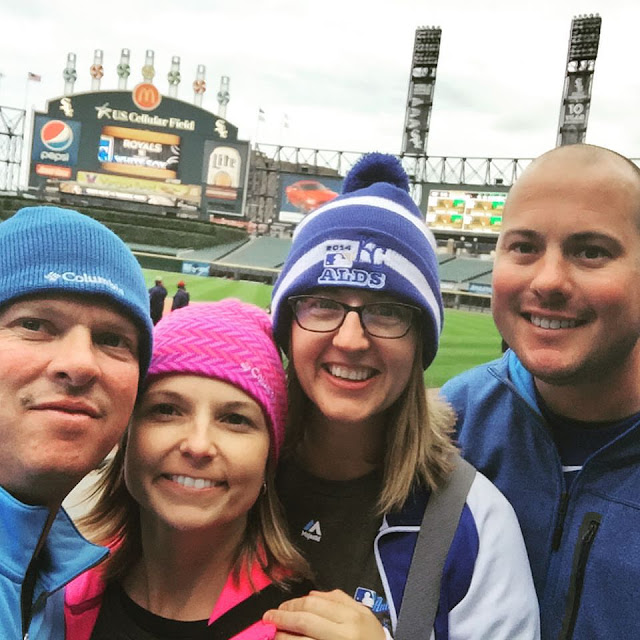 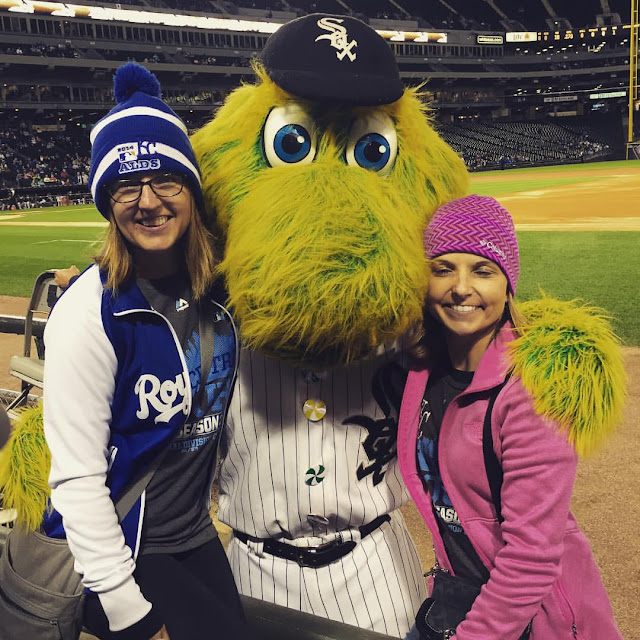 This game didn't go our way either but we still stayed the entire time & had a blast. A blast all trip long. Now all we had to do was make the 8 hour drive back to KC which Adam did after the close of the White Sox game. He drove all night long, stopping every three hours or so for a Coke. Justin was his co-pilot and didn't fall asleep until almost KC and Becky and I were in and out the whole way home. He was a rockstar!

We made it home just in time for the kiddos to get up and get ready for school and then we crashed!

South Baseball Tour was in the books for 2015.