We were hoping that we could say see ya later to the balance bike on Logan's birthday when he got his bigger bike--a Spiderman bike. But like most things, things didn't go as planned.

He was comfortable on his balance bike. He could zip around and could keep up with his brother on the balance bike. Not so much on the bigger bike. & he knew that. So he wanted to go with what he knew and what he felt comfortable with & honestly, who would blame him.

However, we don't roll like that. We told him that the balance bike was going to be given to someone else so they too, could learn to ride a bike just like he did. That he would have to ride his new bike for at least a little while before getting to ride his balance bike again. He wasn't very happy with this but he went along with it--I mean he knew how to do it, he's done it before but he just wasn't confident enough.

We would get him started and we would send him from one end of the street to the other where Justin or I was standing. As he got to us we would try and get him to turn around without stopping and head back the other way but we quickly found out that he wasn't confident in his turning ability. So we worked at---first making a BIG circle around the cul-de-sac and then slowly but surely moving back a more narrow turn. As he mastered each new obstacle you could see his confidence growing. 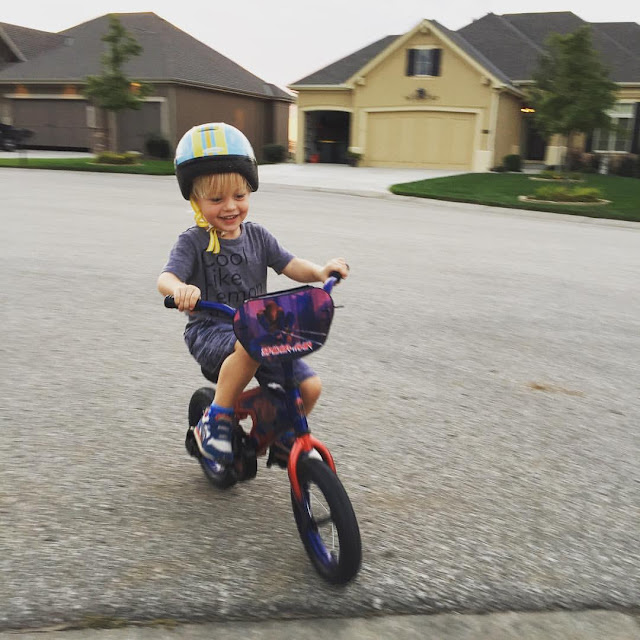 Once he was comfortable with turns we moved to showing him how to get started on his own without us giving him a push. We started in our driveway which as a very slight incline but it was all he needed---he was off & there was no looking back.

That is until---WAM. Kaden cut him off and down Logan went. He wasn't happy. We weren't happy as we had come so far in just a few days---but luckily he got up, dusted himself off and gave it another try.

He isn't riding his bigger bike 100% of the time but if Justin and I are right there, watching and not cleaning out cars or working on the yard, he is. When we are watching and working, he's on his balance bike, he's more comfortable and frankly so am I. Some days you just gotta do what you gotta do....

But the balance bike is starting to take up too much room in our garage or so Logan thinks! It's days are number.
Posted by Kayla South at 9:30 PM