It's that time of the year again, a year older and another birthday party to plan. I feel that I am constantly planning birthdays but truth be told, I only do it twice a year and I can't even imagine what it would be like to have 3 or 4 kiddos…3 or 4 birthday parties to plan.

This year Kaden has taken an interest in magic so the theme was fairly easy to come up with but everything else didn't really fall into place until about a month out. At first we threw the idea of having it at Shawnee Mission Park and then venturing over to Theater in the Park for a showing of Strange Magic but it wasn't starting until late and I just wasn't sure it would go over as I wanted it to so I kept brainstorming.

Finally, I settled with a park, near our home & left it at that. Location is always the hardest part for me to figure out in fact, I already had his invitation and color theme picked out, I just needed to finalize the details. So without further ado,

Prepare to be MYSTIFIED and AMAZED... 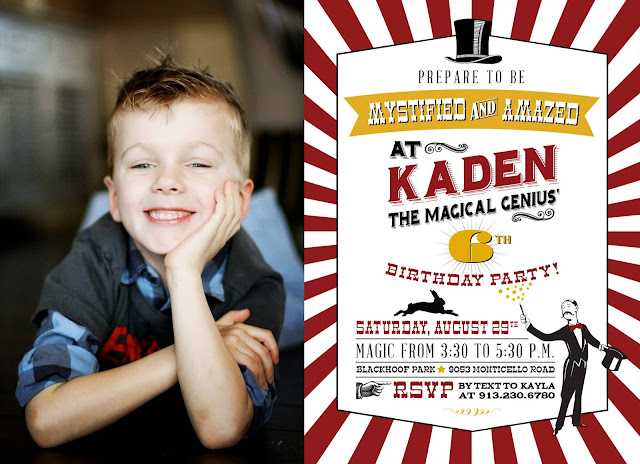 Back to Etsy I went for the invitation. I seem to always find something that I like and if there are minor tweaks, for instance, flipping the orientation to add a picture and then changing a few words that most store owners are more than happy to help. This gem is brought to you by, 3 Little Monkeys Studio, and so are all the other printables--one stop shop this time around.

We decided that since Kaden was starting to get into magic and liked to "perform" his own magic tricks that we would hire a magician to entertain the kids but more on that later. First the set up and the birthday boy.

The shelter at this park is rather large and you can certainly rent it but at $150 for 2 hours, I just didn't see the value in it. You can use the shelter if no one else has it rented for free but you take the chance of it being rented or being busy so we threw in our picnic table and benches just in case. 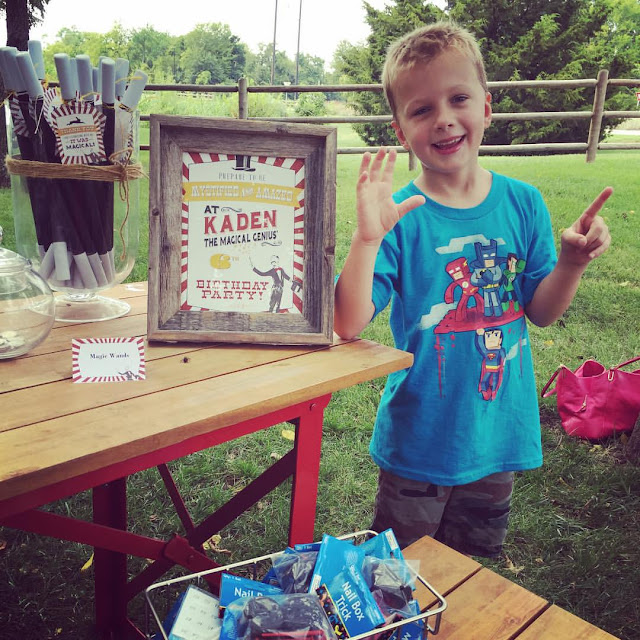 It wasn't rented but there were at least 5 parties being held there so I opted to set up away from everyone else for a little more privacy & not to be mean, but we weren't hiring a magician for every random person at the park…

But back to the decorations---the magic wands were super cheap. I actually thought they were going to be smaller than what they were but was presently surprised when they arrived. Added a little tag and boom--one party favor done. Other party favors consisted of magic tricks the kids could all take home. 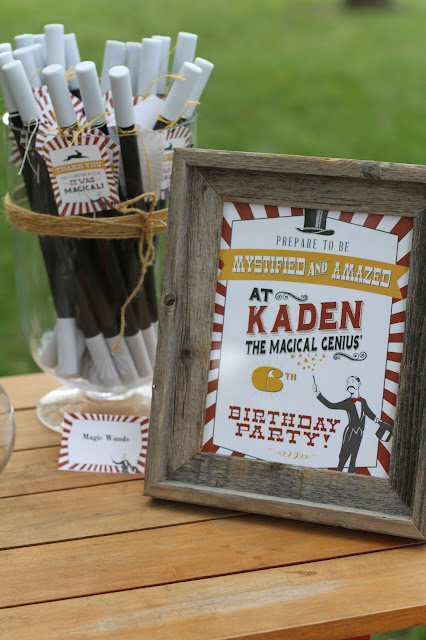 For this birthday I decided to go a different route for the cake and cookies---the cake was made my no other than my great friend Tiffany. Tiffany has been taking a few cake classes and she makes some of the best tasting cakes/cupcakes around and this cake was no exception. I sent her an idea and we talked about it briefly and she delivered on all counts. Plus, the fact that she made the cake made it that much more special. 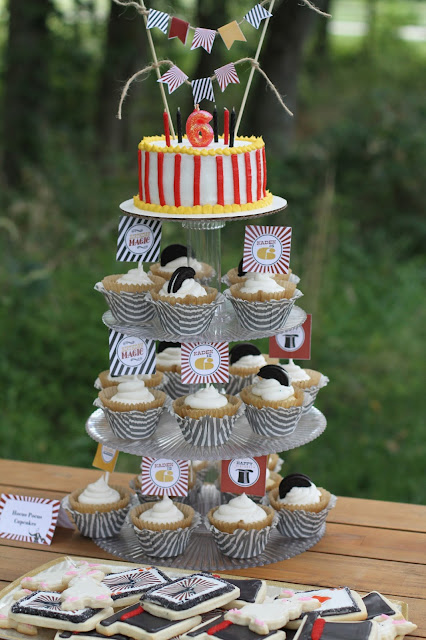 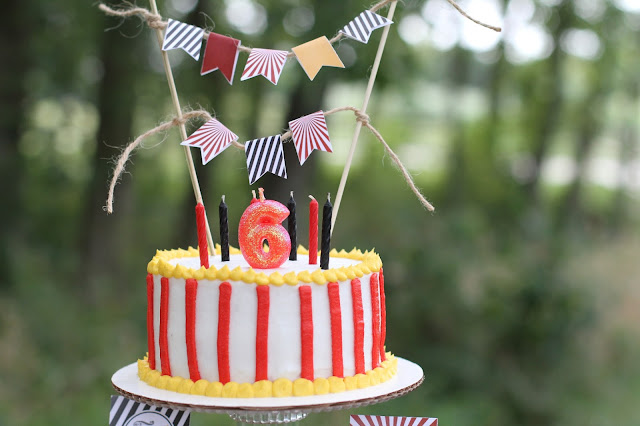 I couldn't deviate away from our MoMo Roo and Shanna's amazing cake pops. These are always the biggest hit of the party and always, I mean always, the first to be devoured. 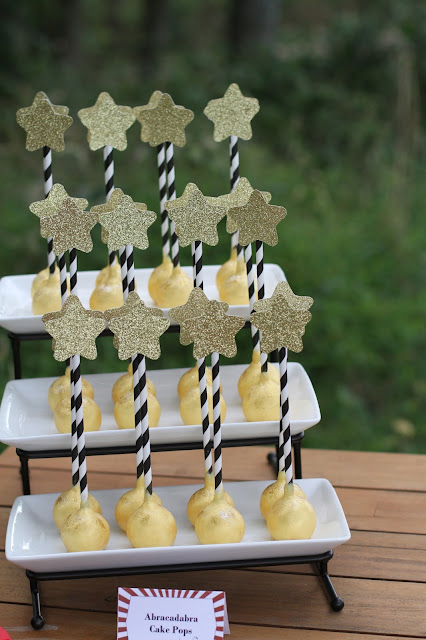 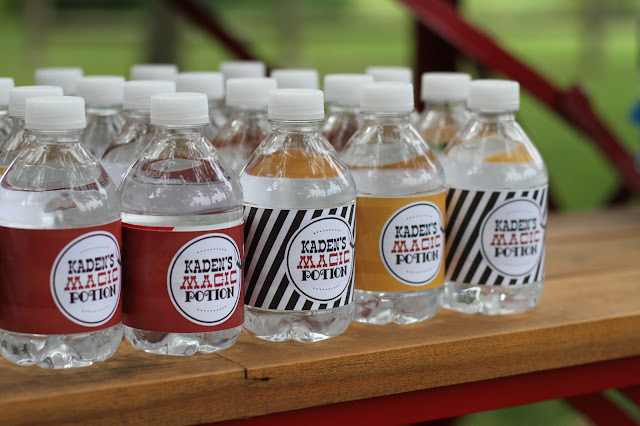 In the past I have used Icings by Ang for our cookies but here recently another friend started her own little business and I wanted to send some love her way. I've had her cookies more than once and let's just say, they're deadly, like I can't put them down!! I shared the invitation with her and we exchanged a couple ideas and I mean, seriously, how cute are these cookies?!? And as cute as they were, they were just as yummy. If you have a party to plan and looking for some yummy & cute cookies, check my friend Sarah out---High Heel Sweets. 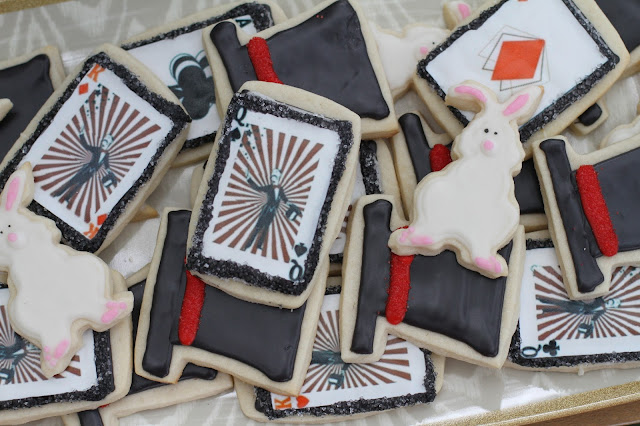 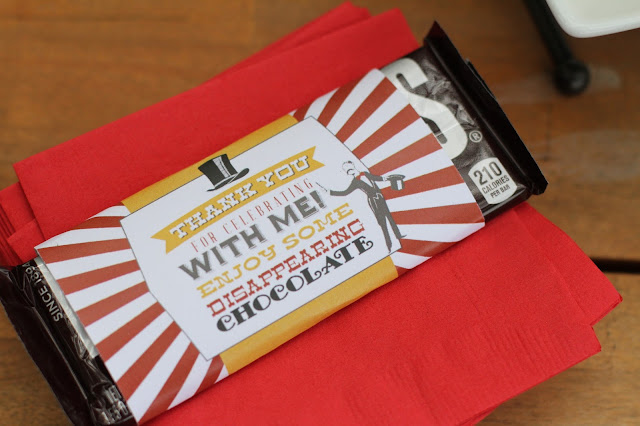 Every picture has a wink in it now… 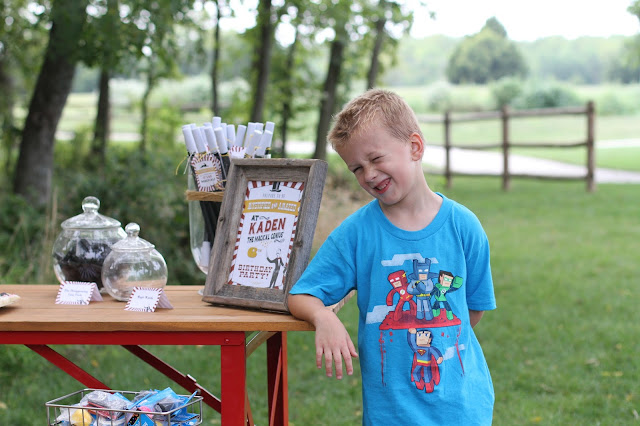 As our party guests arrived they played on the playground and once they burned off some energy we called them over for the main event. I wasn't sure how to go about finding a magician so I just googled Kansas City and Magician and website popped up with a number of local magicians and their websites. I checked out a few of the pages and I settled with Eric from Eric Vaughn Magic. He not only did magic but he did balloon animals too and provided some comedic relief for us adults during the show.

He started the show off with making Mr. Tinkles appear… 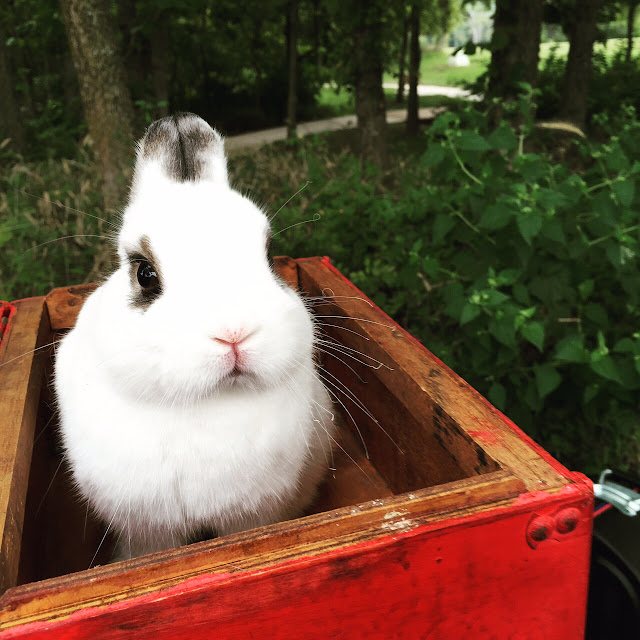 I really wish I would have captured this on video because I am still wondering how he made a rabbit appear with what he was working with---fire, paper, and a round cake pan with a small flat lid. Mind Blown. & Mr. Tinkles sat in his box for the rest of the show and watched just like one of the kiddos.

Eric also asked for volunteers from the kiddos, Jacob was quick to raise his hand and then fell madly in love with Mr. Tinkles. 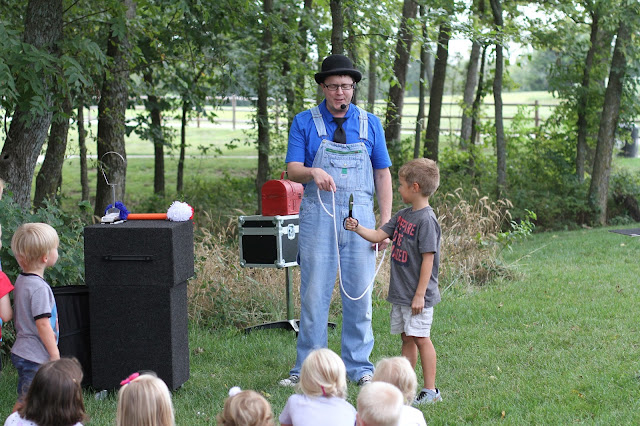 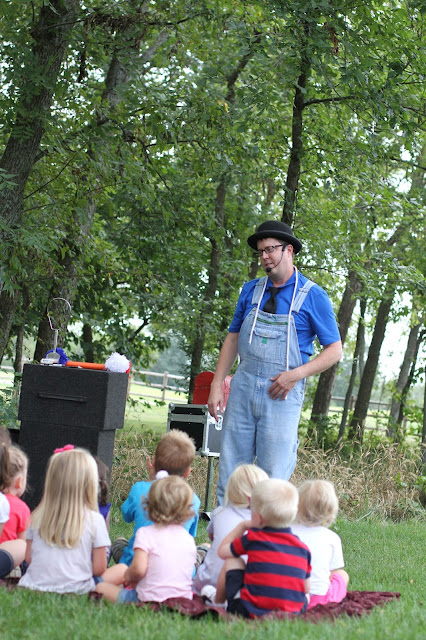 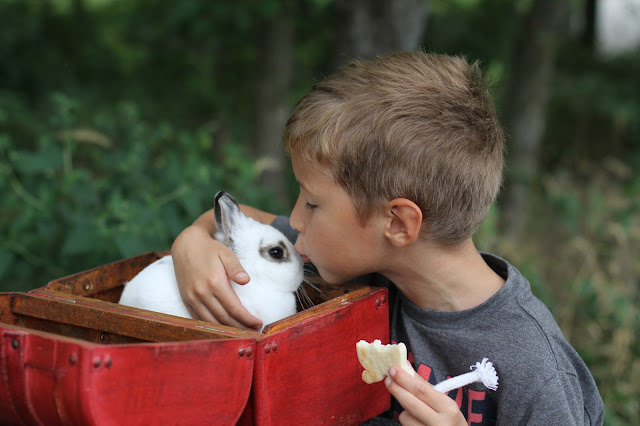 For the very last trick, Kaden got to help---and Abby. Abby hadn't seen Kaden for a few months and was just tickled to be around him again.

After the show was over, Eric made balloons for all the kiddos, some he had to make two balloons for because they popped their first. He was so great with the kids and stayed until each kid was happy with their balloon. Would recommend him to anyone looking to add a little fun to a party.

I kind of forgot about the camera strapped around my shoulder and didn't get a single picture of the balloons, of the kids playing on the playground---except this one which was right before everyone parted ways and only has half the kids in it anyway! I thought I was doing a pretty good job documenting but the two hours flew by pretty quickly and before I knew it, it was over. 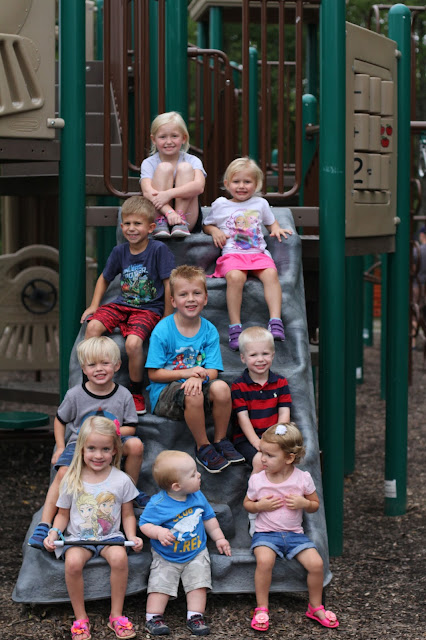 Another successful birthday party for the books. Thank you to all our friends and family who came out to celebrate Kaden's 6th birthday. It just keeps getting better and better watching this group of kiddos grow up together.

And I have already been told that next year will be a Hulk Bowling party…YAY, another Superhero party!