It's been 5 years 347 days leading up to this day and I just pray that we have prepared him enough to take Kindergarten by the horns and ROCK it. 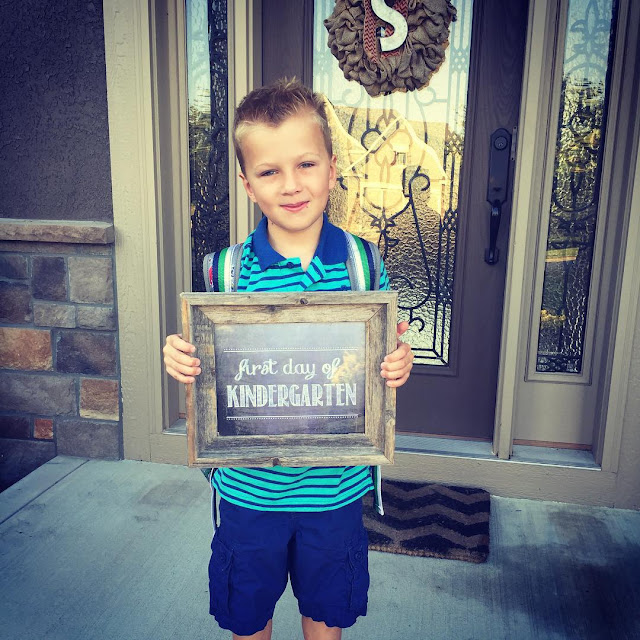 Kaden was super stoked for this day to come so much so that we started a countdown over the weekend so he wouldn't have to ask every day how many days left until the big morning. 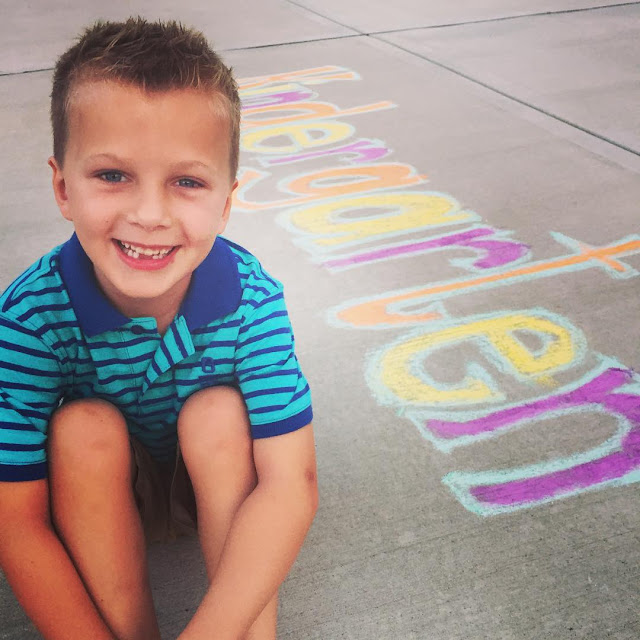 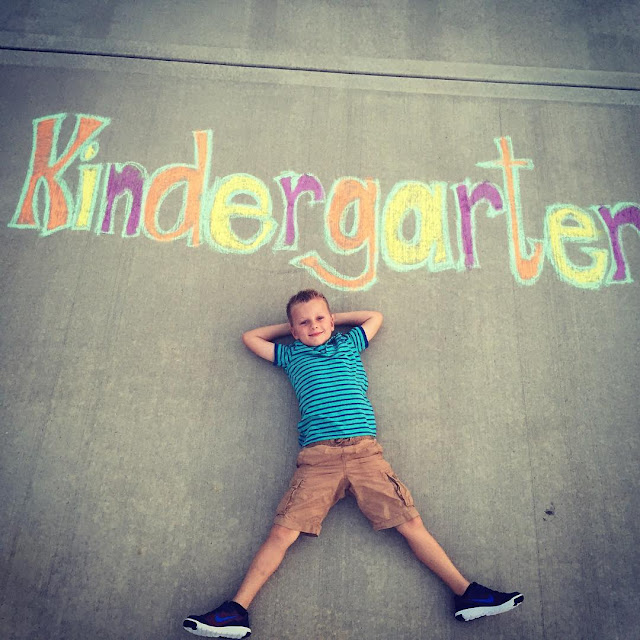 The night before Kindergarten we had a full list of things to do----take a bath, pack his lunch, get his backpack ready, lay out his clothes and then read Kindergarten Rocks. I'm not sure if he knew what he was walking into with this whole Kindergarten thing... 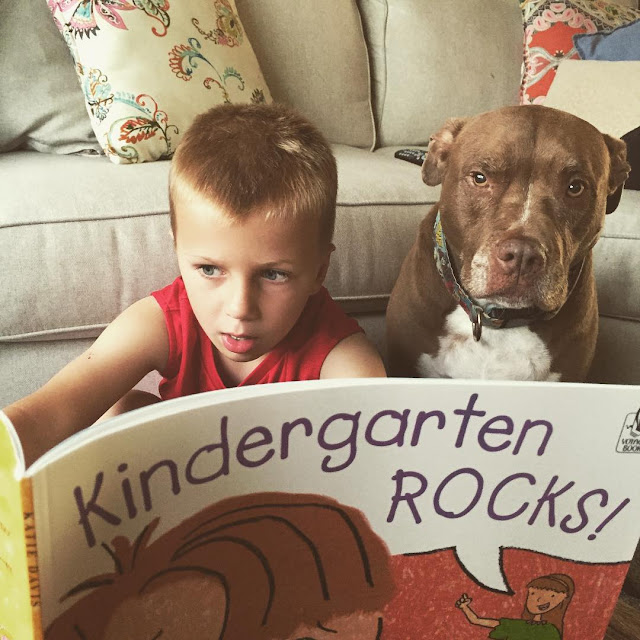 & most importantly, we got some extra snuggles in. 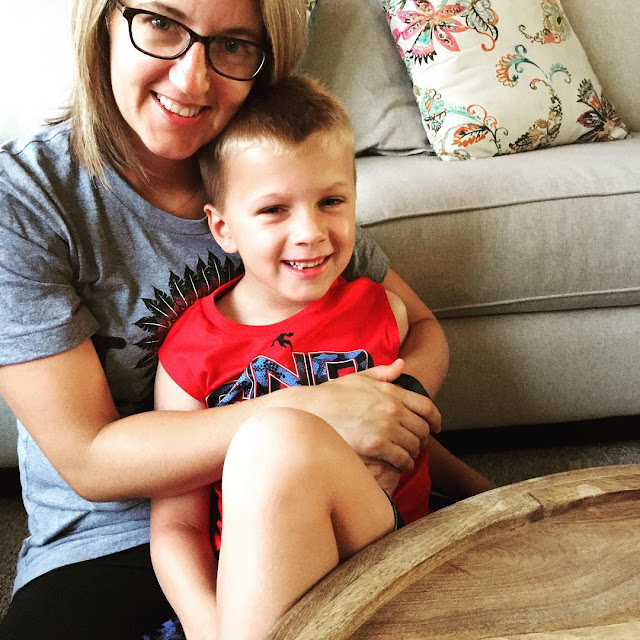 You see this wasn't just a transition for Kaden, this was a transition for the whole family. Logan and Kaden have not been separated for more than a few hours since Logan was born. They have been the best of buds since day one and thinking about separating them was breaking my heart. As much as I know this is going to be good for them both, it makes me sad that have to go so long without each other, but surely that will just mean their time together will be spent loving on each other versus fighting…right?! 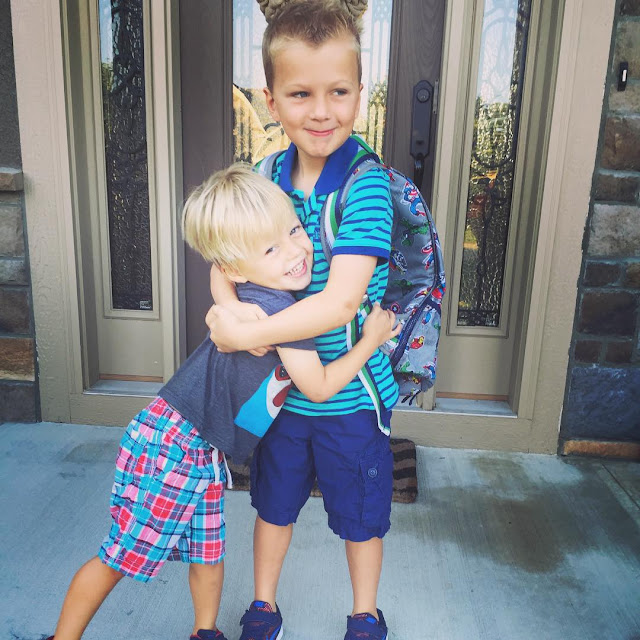 We had decided that Kaden would ride the bus to and from school but on this very first day we would take him to school and then wait for him at the school bus stop which just happens to be at the corner of our street this year--YAY for us. But before we headed out to take him to school we needed to get the obligatory family picture with the big Kindergartener---dad was thrilled. 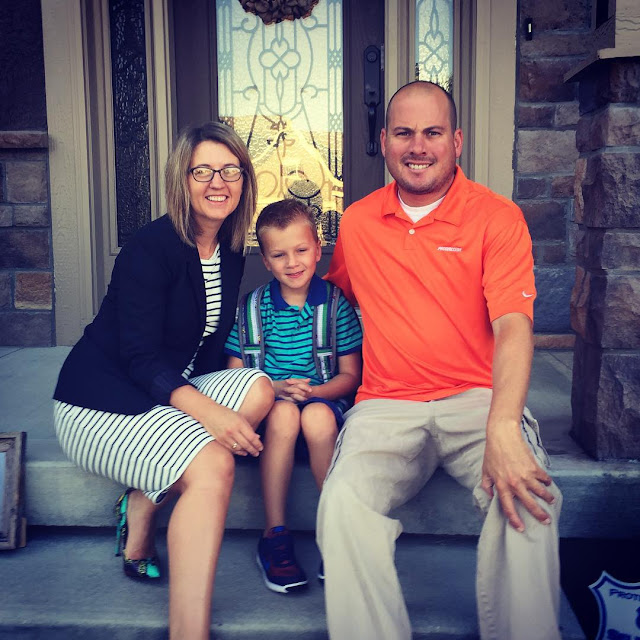 And of course, a couple pictures with my iPhone just wasn't enough so I got out my nice camera (although unedited) and took a few beforehand too, along with a video to document his sweet voice as Kindergartener. 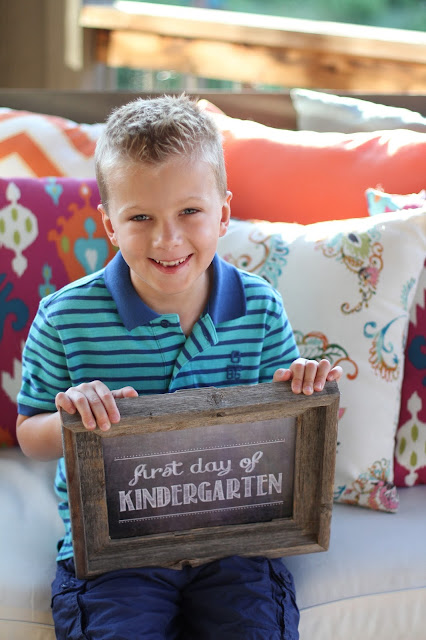 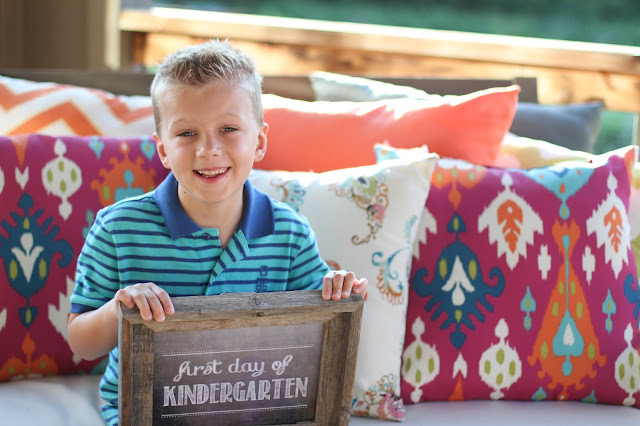 And then we were off to CCE. It was total chaos and I felt a little more overwhelmed than Kaden did. He walked right through the doors and led the way to his classroom. He immediately put his bag up and found his seat and started working on his first project. I stood there talking to him, he asked if we could stay and as soon as I said we weren't able to he said, "Okay, bye." I gave him hug and Justin told me it was time to go. I wasn't quite ready to leave but I knew if I stayed around any longer I would lose it. So I kissed him goodbye and told him I would see him at the bus stop.

This was going to be the longest day of my life. I was going from knowing everything about his day, almost as it was happening to knowing nothing. How was he going to do? Was he going to make friends easily? Would he follow directions and listen? Would he use his manners? Would he have enough time to eat his lunch? There were so many questions and worries that I had but all I could do is trust that he could do it and hope that if he had questions that he wouldn't be too afraid to ask for help. This was good for him & honestly, it is probably good for this mother who likes to be in control too.

The day crept by but finally the time came where I was able to leave work, pick up Logan and we patiently waited for Kaden and the bus to arrive. Daddy joined us too. 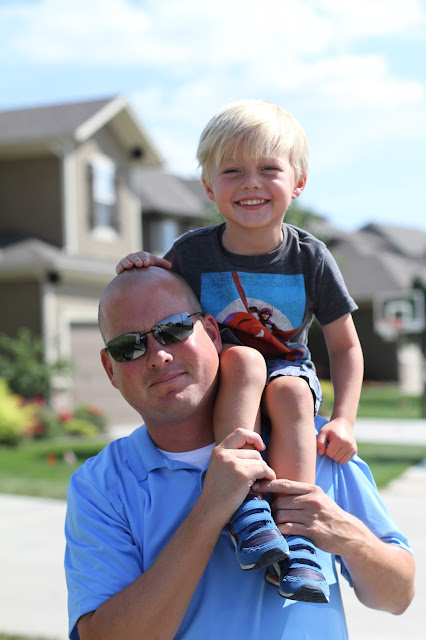 And then we saw it. The big yellow school bus charging down the road and of course I had to capture the play by play... 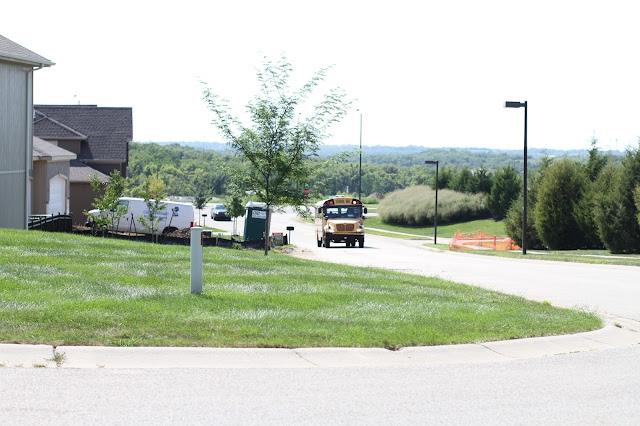 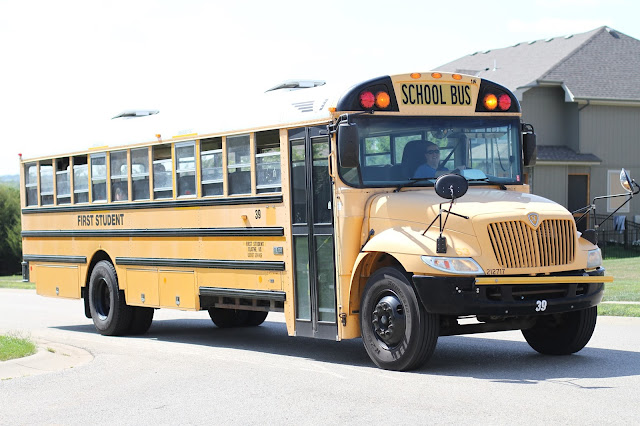 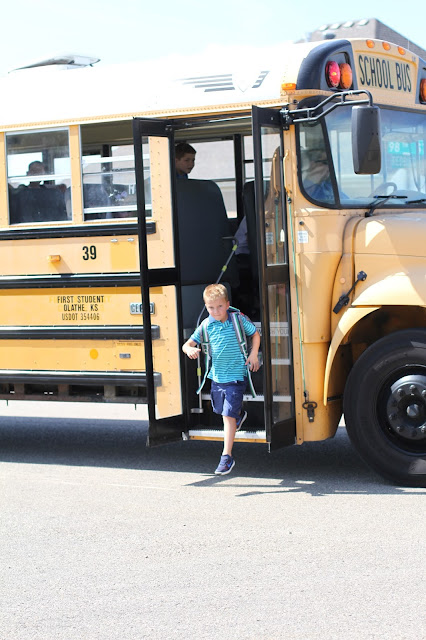 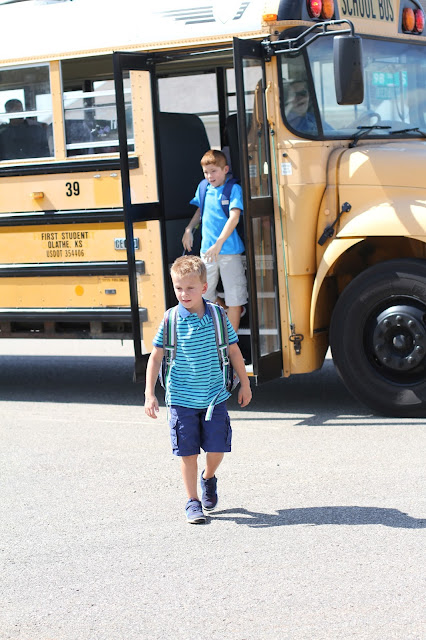 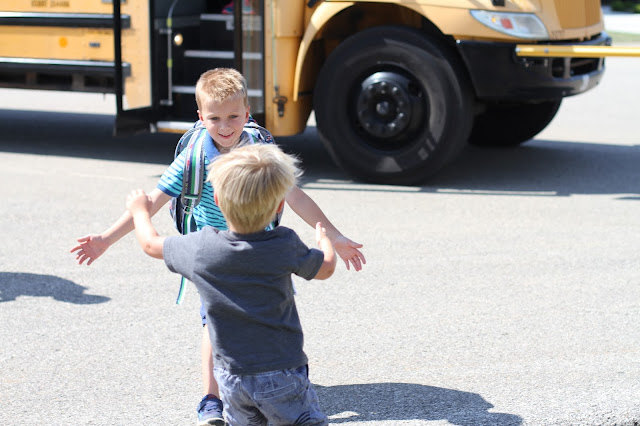 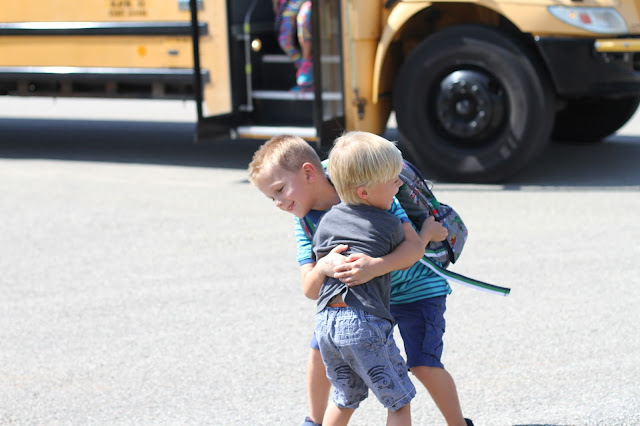 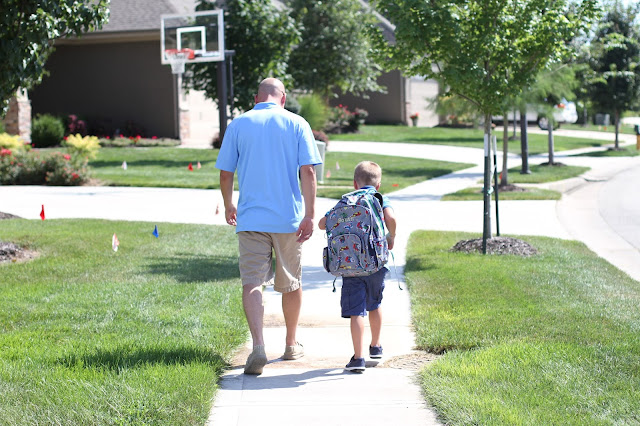 Day one was in the books and everyone was still smiling. He talked about some friends that he met but didn't know their names. He talked about recess being his FAVORITE thing, they finish the day at recess and he gets to see some of the neighborhood kids at recess too. I had a special treat waiting for him when he got home---Back To School cookies from Icings by Ang---and then we were off to dinner. His restaurant of choice, Jalapenos.

The following morning I got up and was out the door by 6 to run and when I got back a short while later he was up, dressed and had his backpack and lunchbox ready to go. This was his first morning to ride the bus to school and I am not sure his smile could have been bigger… 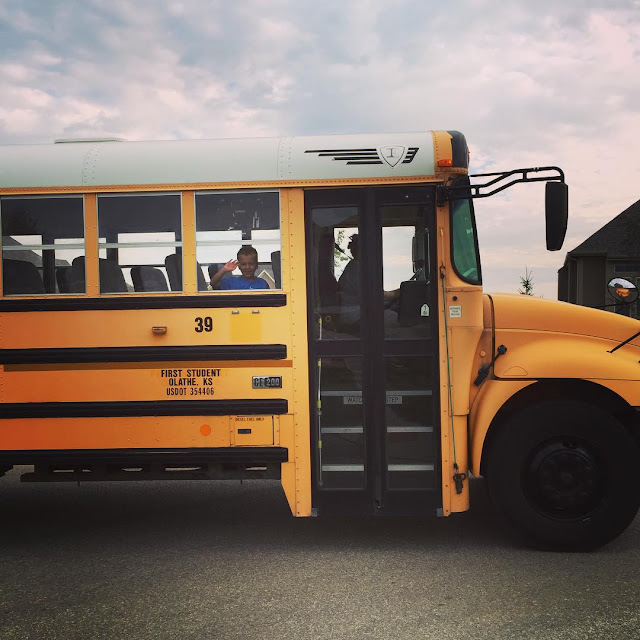 Kindergarten was off to a great start.
Posted by Kayla South at 12:35 PM