I love celebrating birthdays and there is none more important than America's birthday. It's the HOME OF THE FREE and the land of the dreams. & of course no birthday is complete with out a little cake--or in this case red velvet cupcakes, cream cheese icing, topped with blueberries. 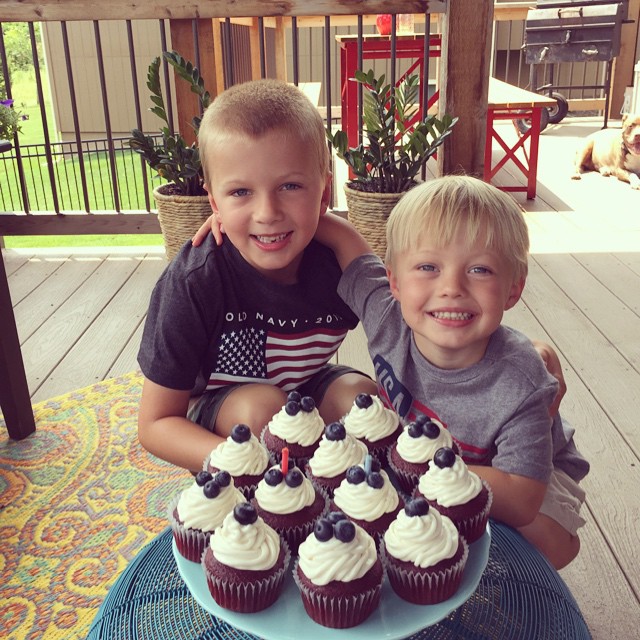 We were suppose to spend the morning/afternoon with the Walshes but shortly after they arrived at our house poor Nathan got sick so our afternoon plans were scrapped but that didn't matter as long as Nathan bounced backed. So since they headed home earlier than expected and we had been offered tickets to the Royals but initially turned down to spend the afternoon with them, we reached back out to see if the tickets were still available---they were & we decided to head out to the K.

I mentioned to Justin that if we got there early enough we would probably get the hat they were giving away at the gates, we missed it by 5 people. Boo. Surely there were a few Twin fans in town that didn't need the Royals hat they were handing out. Good thing I had Logan, found a Twin's fan, offered him a beer and some cash and he took one look at Logan and said, he can have it for free! Hat secured.

Another advantage of arriving early is getting to experience the Little K before the game starts instead of during. I jumped in line at the Little K ballfield with the kids as Justin headed to get tokens. It took us a little while to get to the front of the line but both boys were super stoked for their first plate appearance at the Little K.

Logan was up first. He didn't get a hit but man did he put what he learned at baseball camp to good work & had perfect form. He will become famous with that leg hike. 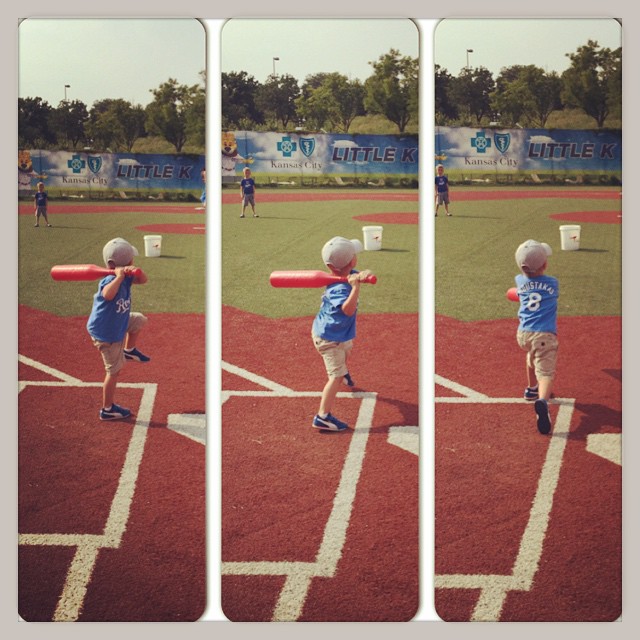 Kaden, he connected with 3 out of 5 and trotted his way around the field as though he was big man on campus.

We picked up a few Dip and Dots before taking our seats right behind the visitors dugout. 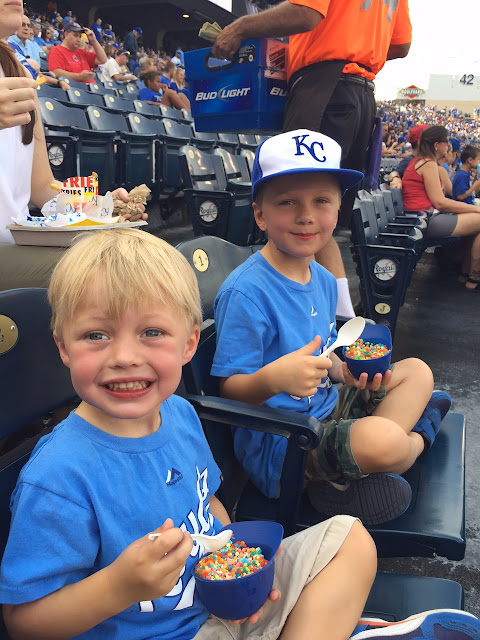 We stood as the National Anthem was sung, the boys placed their hands over the hearts and then at the end, we said a little prayer for all our service men and women who are risking their lives to protect our country and the freedom of others. There was this wonderful family of 6 who was seated in front of us and as I finished the prayer, she grabbed my hand, teary eyed, & thanked me for praying. Her husband was leaving in a few days on tour and this was their last outing as a family. We took a moment to pray with her for his safety right then and there. I didn't know them, still don't know them but I think about them often & pray for his safe return.

Our seats were pretty great. Especially when #6 came up to bat. 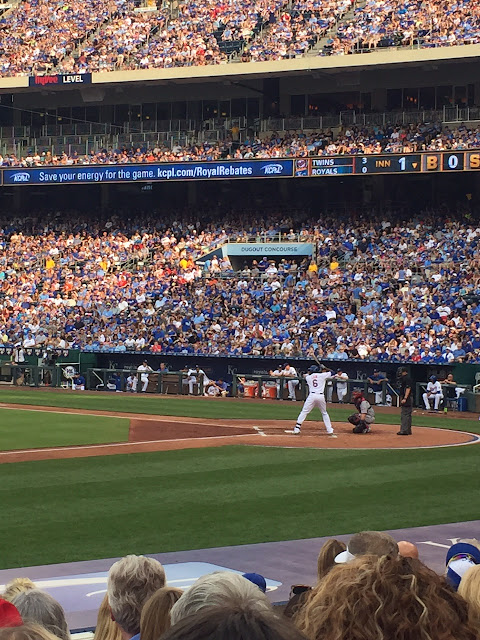 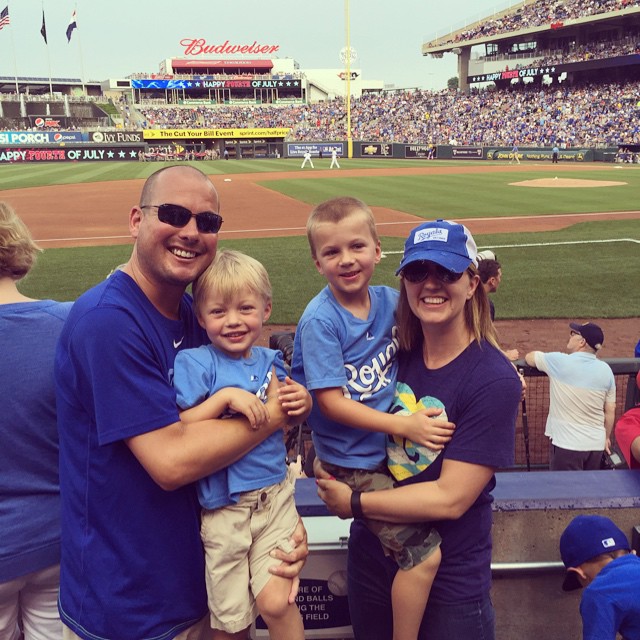 The boys were patient all night. They of course wanted to know when the fireworks were going to start  but being so close to the action kept them entertained. They even made it on the jumbotron during the Karate Cam--2nd time for Kaden this year. It was fun seeing them on the jumbotron but hearing from numerous friends that they saw the boys on the jumbotron and how excited they were to know someone that made it on there was just as exciting. 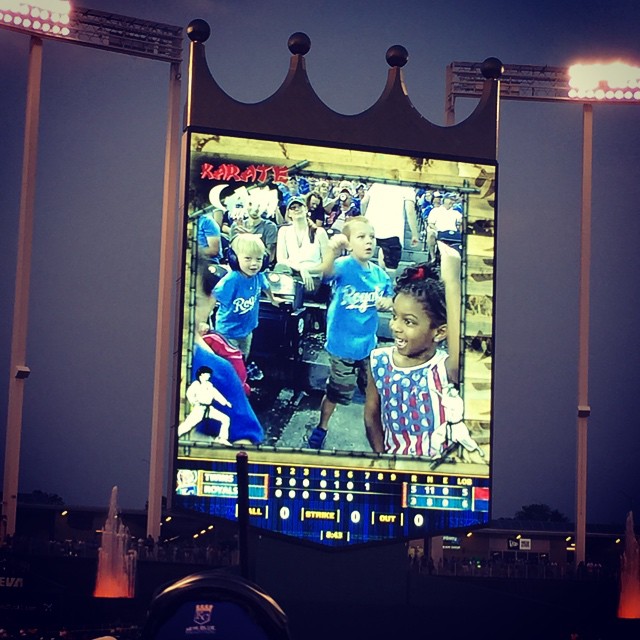 The game ended, I believe we may have lost BUT the fireworks were still ahead. Justin thought it would be smart to head out to the parking lot to take in the firework festivities so that we would have a head start on stadium traffic. 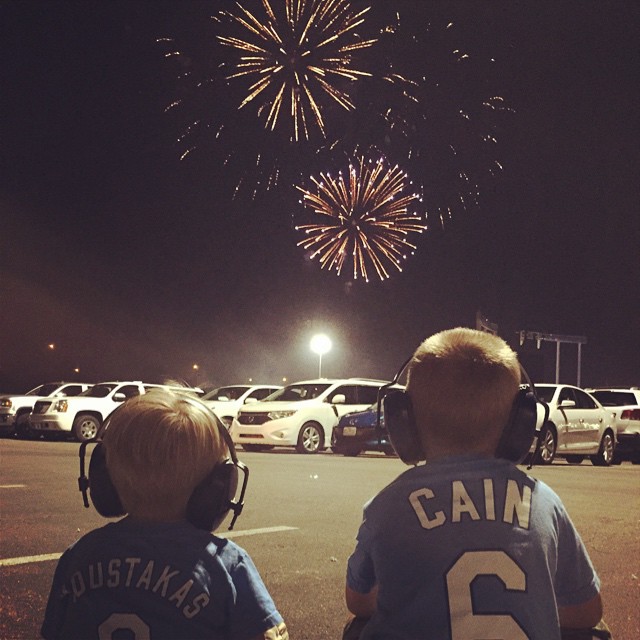 And most people would probably have driven on home seeing how it was already past 10 but no, not us. Jake had texted us a few time letting us know that his neighborhood was really just getting started with fireworks so we headed over to join the fun.

I'm not sure who had more fun, Jake or Logan. Logan was a little pyro this year. Last year he was a little timid, this year, he was following Jake around with the biggest fireworks in hand ready to give them to Jake as soon as he sat the one off he had in his hands. Kaden wasn't a big fan of the super loud booms--I really wasn't either & he may or may not have been caught off guard with an adult snapper thrown towards his feet---thanks Dad and Uncle Jake---so he took a backseat this year. Although we took a few parachutes home to shoot off during the daylight and he ate those up just like he did the year before. 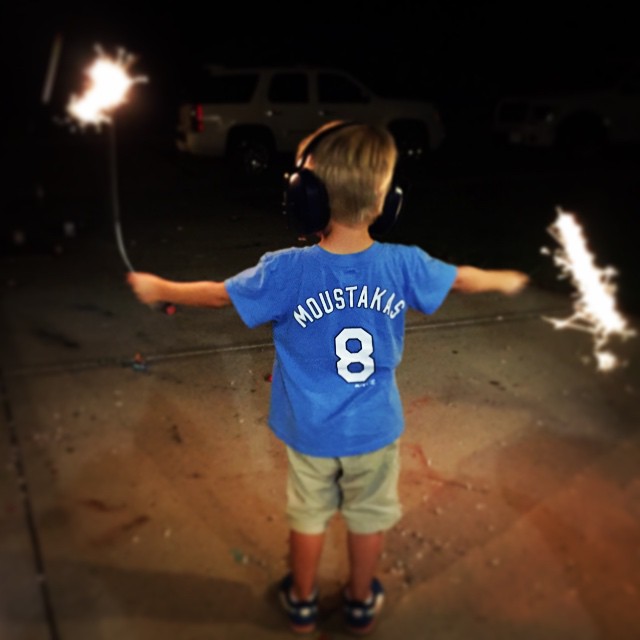 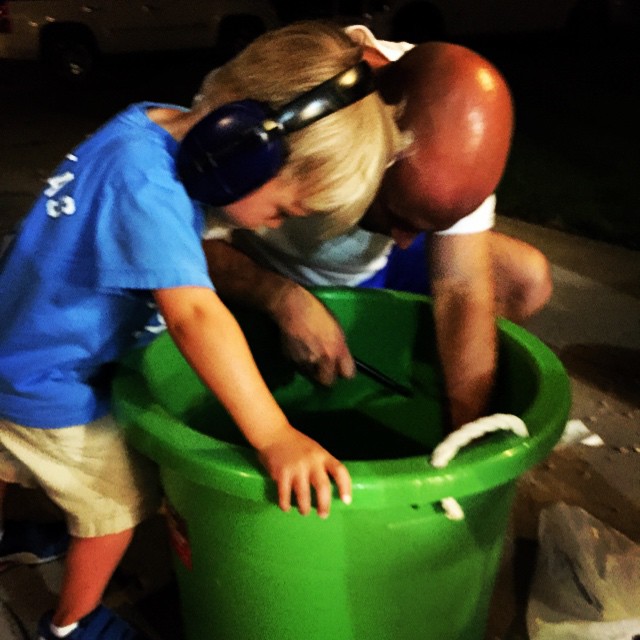 We pulled into our driveway just before midnight and carried the kids to their beds. Another success Fourth of July for the books.

Cheers to you America.
Posted by Kayla South at 4:52 PM