I am the type of person that likes to put her goals out for the whole world to see. I guess, I like accountability and when I put it out there, I feel everyone is keeping me accountable. Or maybe someone is...

I did the 21 Day Fix back in January. I was hard core with it too. Ate what I was suppose to eat and worked out when I was suppose to work out---every day. Okay, I missed one day due to travel but I made it up. After the first 21 days were over I continued the workout program, it was 30 minutes and it felt good. As for the eating, I made some major changes in the types of foods I was eating and my portion sizes. I ended up finding a number of foods that I LOVED, hello humus, that I didn't even know I liked. So I wasn't as strict when it came to the food but I was making WAY healthier choices most all of the time.

& I am happy to say that this hasn't changed. I am still eating healthy and still feeling great---it's amazing how thinking about all that fried food just makes my stomach hurt. It's not worth it---in more ways than one too. 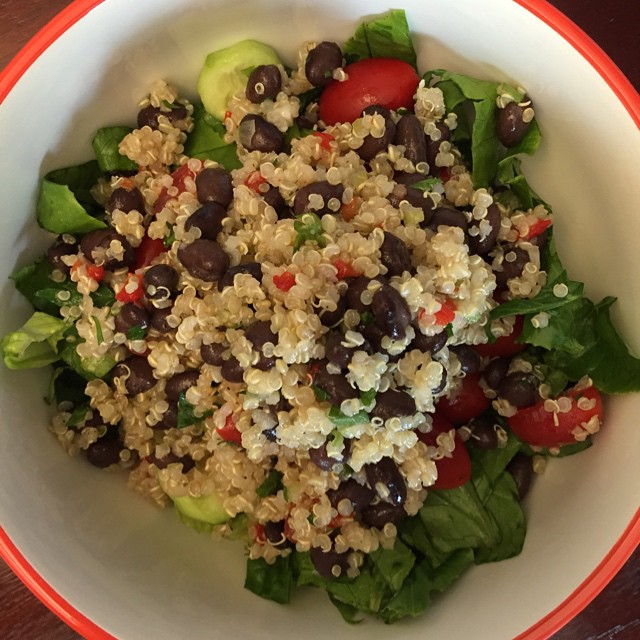 The workouts on the other hand I haven't been as good about. I was ready to jump back into full workout mode in April to get swimsuit ready for the cruise but then it got canceled and I got bummed out. I couldn't find the motivation---as if an even healthier me wasn't enough. Instead of working out, I started walking with Brodi and then Chicago happened, I twisted my ankle--my already weak from high school ball ankles. It wasn't pretty. And literally for weeks I was sidelined from even enjoying a long walk with my dog.

I was keeping the weight off that I lost during the 21 Day Fix program but I wasn't as energized and before I knew it the middle of July was here. My SIL is turning 40 in August and we planned a girls trip to Cabo for the middle of August and I had to start doing something to make me feel and look better.

I decided that I would add a little cardio into my routine. I would try and run each morning using the Couch to 5K app and then mix in a little 21 Day Fix workouts along the way. So on Sunday after breakfast with the kiddos, I took off on a short run. Being a non-runner like myself, it was tough. I started out with a 5 minute warm up walk and then alternated 1 minute of running with 1 1/2 minutes of walking, repeating for 20 minutes and then ended with a 5 minute cool down. 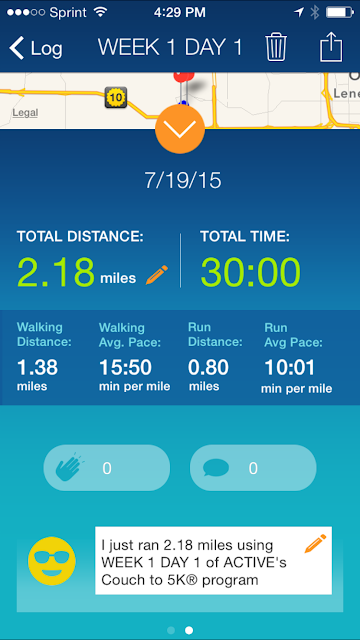 It may have been tough but it felt so good to sweat. & the app is AWESOME. I can stream my music through it. It will not only tell you when you need to walk or to run, it vibrates the phone too in case you have a hard time hearing it over your music. It keeps track of your total time, your walking pace, running pace & the distance you have gone. You can log every run and review past runs to check your progress. The app makes all the difference. And having a great running spot right by the house. 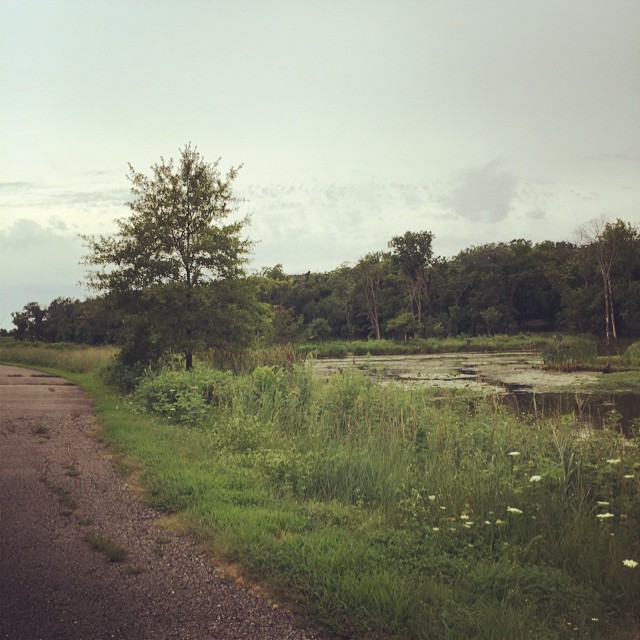 On Monday, I was sore and it was raining so running didn't happen but that was okay, this program only asks for 3 days a week, my goal is more than that but not being able to run on day two wasn't a big deal.

On Tuesday my Fitbit woke me up at 6:00 and I had an internal fight with myself. I came up with every excuse needed to stay in bed but I fought them off and I got my butt out of bed and put on my shoes---I sleep in my running clothes, half the battle already won. I walked out the door at 6:10 and off I went, It felt better than Sunday and you know what, it was. Even set a new PR. (I know, that's not hard to do with just two days of running but hey, it's a win). 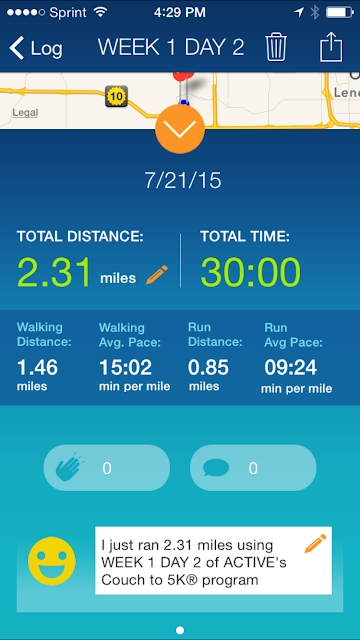 On Wednesday my Fitbit woke me up again at 6 am. I didn't argue with myself this particular morning instead, I jumped up and got moving. Another PR. (Personal Record for those non-runners like myself!) 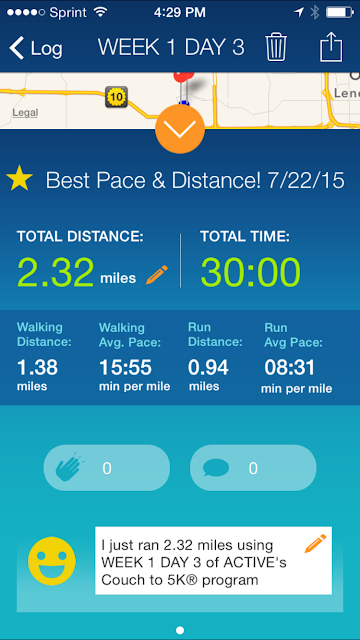 Week one of the program was complete and it was just Wednesday so do I repeat the program for a few more days or jump to week two? Totally jump to week two. No brainer. But first I needed to figure out how to run with my phone. The first three days I just held it in my hand but that didn't seem very smart and since I had 3 days under my belt, I figured I owed it to myself to look into some sort of wearable device. Enter Flipbelt. At first I just bought an arm band and before I could receive the email from Amazon to confirm my order, I was cancelling it. I thought this belt would be a better fit for me. It's pretty genius and has room for your phone, your keys, your credit cards, license, mace, etc. And I am a Prime member so it was set to arrive on Thursday.

On Thursday my Fitbit woke me up again at 6 am and this time, I pretty much jumped out of bed. I tiptoed to get my shoes and then down the stairs, tied my laces and headed out. It was only day 4 but I was starting workout 1 of week 2---1 1/2 minutes of running followed by 2 minutes of walking and repeating for 21 minutes. Still had the same warm up and the cool down periods though.

I started off feeling great. adding that extra 30 seconds to each interval wasn't that big of a deal. I was alternating running and walking and only had 2 intervals left; a new PR was on it's way and then everything stopped. Literally. I turned my ankle and it took me to the ground. I'll admit it too, I was bawling. Like my 4 year old son does when we tell him we can't go to the pool because it's raining out, bawling. Partly because of the pain I was in. Partly because I was pissed it happened again. Partly because I hadn't even gotten to try out my Fitbelt. Mainly because I was just starting to really enjoy this running thing & wasn't sure what this meant. 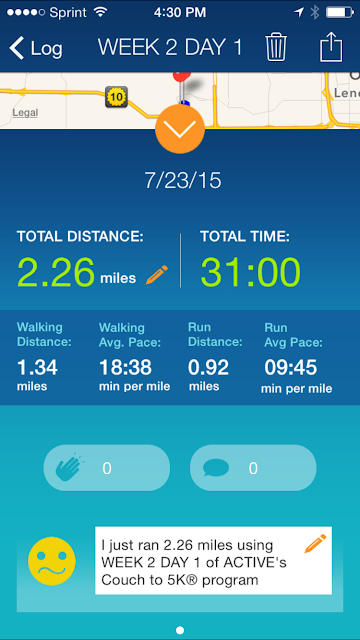 I managed to walk back to the house and immediately Justin knew something was wrong. My ankle was huge and it was throbbing. I took a shower, threw on my work clothes and reached for the flats. The very same flats that came in so handy after the Chicago ankle incident.

That evening the Fitbelt arrived. I went ahead and tried it on only to take it off and set it to the side. We headed out to the boys' ballgames that evening and I continued to walk around on my ankle. It was feeling a little better but it was still sore. When we arrived home I just decided to give running a little try, you know, to see if I could make wide left handed turns and I could. I started to perk up a little.

On Friday morning my Fitbit woke me up at 6 am. I got up. I pulled on my shoes, opened the front door and took off. I was very focused on each and every step I was making but I did it. Maybe not a PR but I showed myself that a little hiccup wasn't going to stop me. That it is up to me to say what I can and can't do. 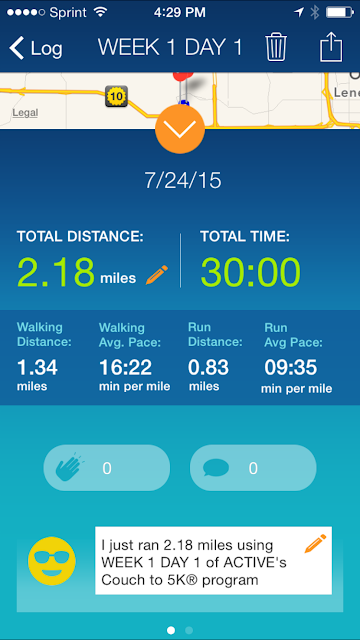 Today's run was the best run yet.
Posted by Kayla South at 3:09 PM