The Cain Train to Chi-Town

The South Baseball Tour of 2015 took us to Chicago this year. As soon as my dad saw that the Royals were playing at Wrigley field he was on the phone calling to see if we were in. He didn't need to even ask, we were totally in.

It was a three game series beginning on the Friday night following Memorial Day weekend and we decided to go to game two on Saturday and use Friday as a travel day. We looked at flights and the train but in the end we settled on driving, economically it made more sense but we weren't so sure if our patience would hold out. This would be a test for sure.

To make matters worse----the International Gospel Festival was in town the same weekend and there were NO hotels on the Magnificent Mile unless you wanted to pay around $800 a night. And we weren't about to do that so my mom took control and found us a place to stay for the weekend--we would come in on Friday and leave on Sunday.

But before we could think about Chicago, we had an eight hour drive to prepare for and plan. At the last minute we decided to take a small detour through St. Louis and see the Arch. We left Thursday after work and arrived in St. Louis a little before 10 and the boys were wide awake until around midnight. The first four hours of our trip consisted of a lot of "this is the LONGEST trip EVER" and "When are we going to be there?". Justin and I were just hoping that Friday didn't pick up where Thursday left off. 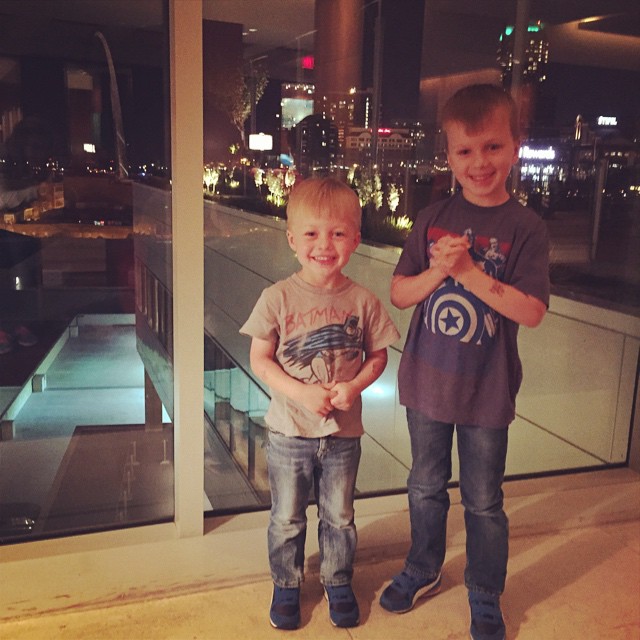 The Four Seasons was amazing---they were so friendly and were so incredibly nice to the boys, we will definitely stay there again.

Since we had a little time the following morning before my parents passed through and we were already downtown we decided, well I decided that we would walk to the Arch. I haven't been to the Arch since I helped move a friend out to Indiana---years ago mind you and it had been even longer for Justin. 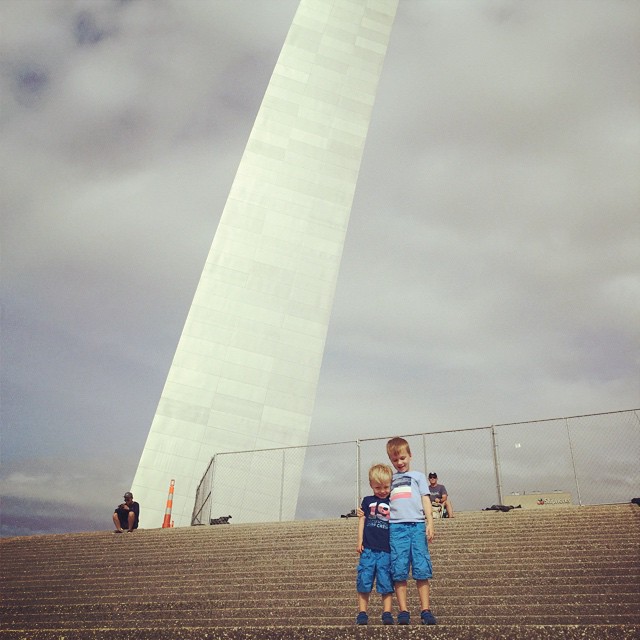 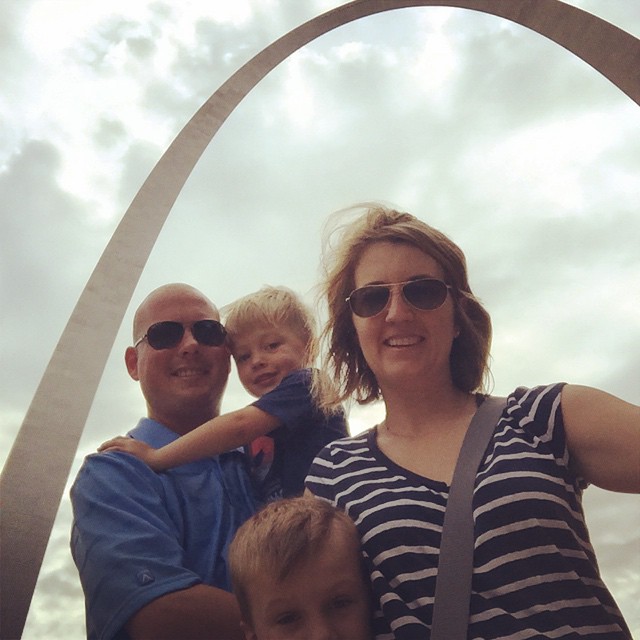 It was under construction and unlike when I went a few, a number of years ago, it now costs to go in before you go up---so we settled for these pics. & this was my first real stab at the selfie stick--improvement much needed since I managed to chop off my son's face.

Speaking of selfie stick---I bought one. There I said it. I figured that since I am a photographer, it was cool. No really, I just wanted one. I wanted to be able to capture all four of us in a picture without having it only be close ups of our faces. And let me tell you, my hubby is super supportive of the selfie stick---said no one ever.

My mom and dad texted as they drove through St. Louis and by the time we got packed up and on the road, we were only a few minutes behind them and managed to catch up just in time for lunch. And as we were reaching the outskirts of Chicago the boys finally fell asleep. 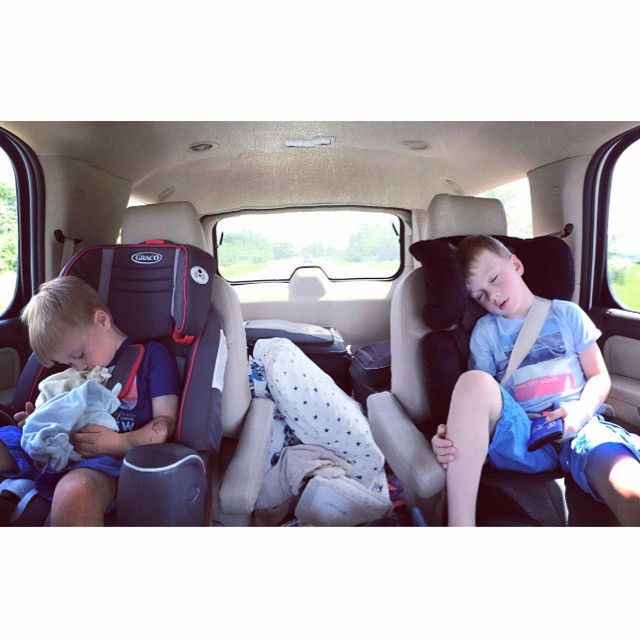 We reached our hotel, near Midway Airport and more importantly near the transit system, about 4 o'clock, quickly unpacked, watched the end of the Royals game and then headed out for dinner. Giordano's was right down the street and Chicago pizza was one of the items we wanted to check off our list. 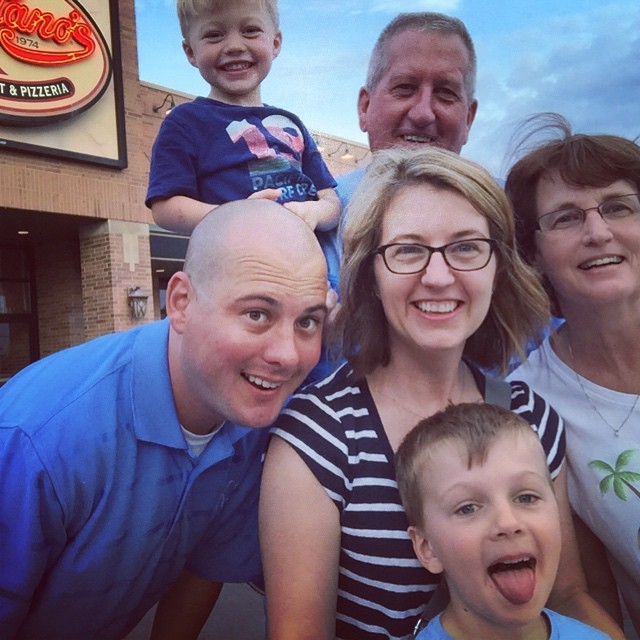 Saturday was going to be a busy day so we headed to bed early fully knowing that the boys would be up bright and early and they did not disappoint. 6:30 rolled around and they were on the move. We ate a quick bite of breakfast and packed our bags for the day. We decided that once we left the hotel that we would not be coming back until after the game which meant I had to carry multiple changes of clothes for us all in my handy dandy Stella and Dot bag, it was heavy but I had a couple strong men helping me out when needed. 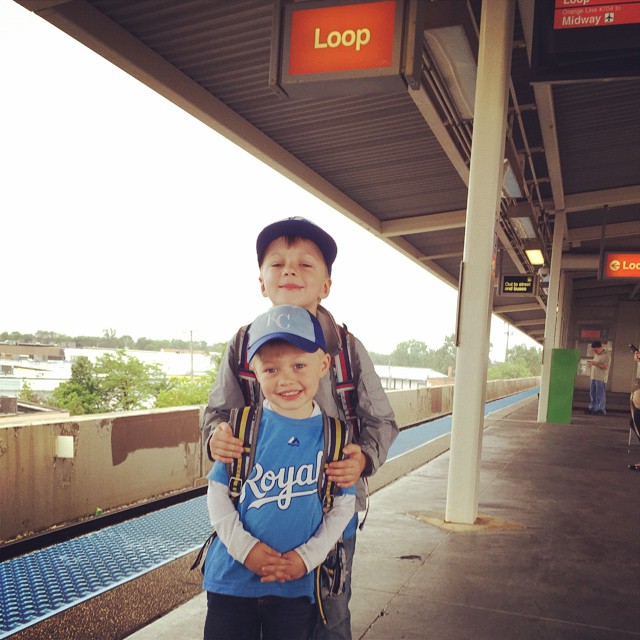 Our first adventure of the day was figuring out The Orange Line. We jumped on it and took it to Roosevelt where we jumped off and headed over to the Shedd Aquarium. We were told it was a must see and not only did we have about 5 hours to kill but it was also raining and we needed to find some shelter. Luckily, it was a short walk and it was only sprinkling.

In about two and a half hours we were able to see most everything the aquarium had to offer. Our favorite parts were by far the hands on activities--touching a River Trout, a Sting Ray, & their aquatic show. The boys chuckled so much when the seal did it's own handstand. And they couldn't believe how close that seal got to us, he literally walked right in front of us and they thought that was just pretty darn cool. 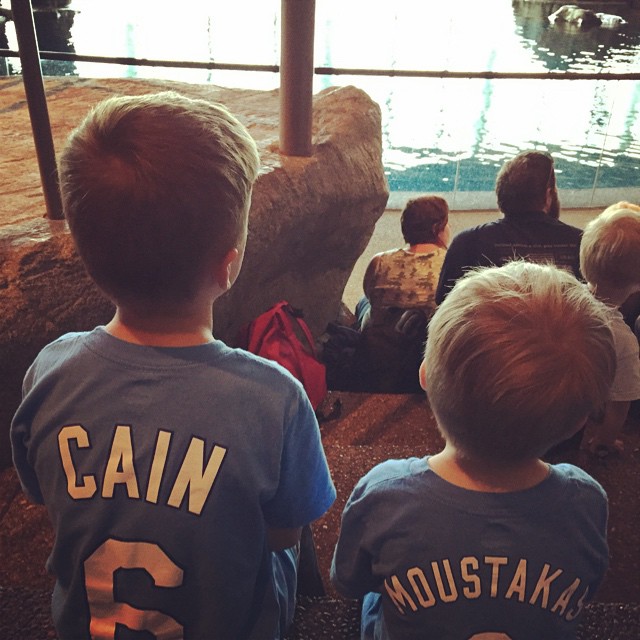 And of course we had to have another family picture outside of the Shedd to document that we checked it off our list too. & I just love this picture of Logan. 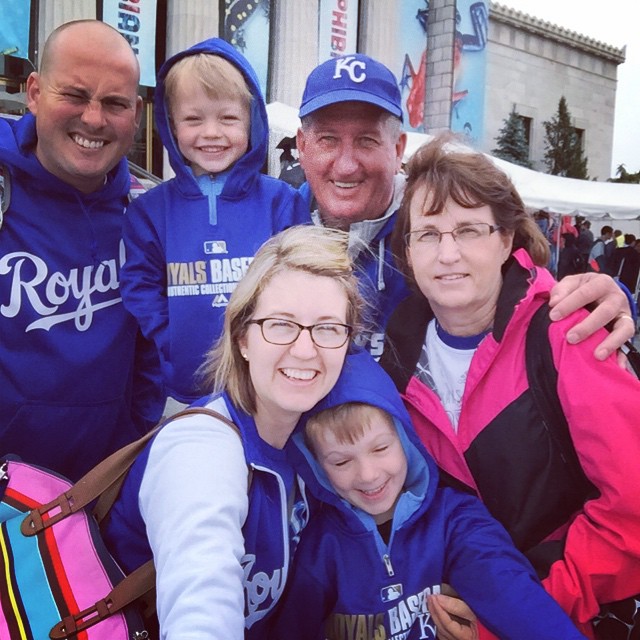 And my dad was kind of digging the selfie stick, he wanted to turn the other way and get downtown Chicago in the background. Family pic with downtown behind us, Check. 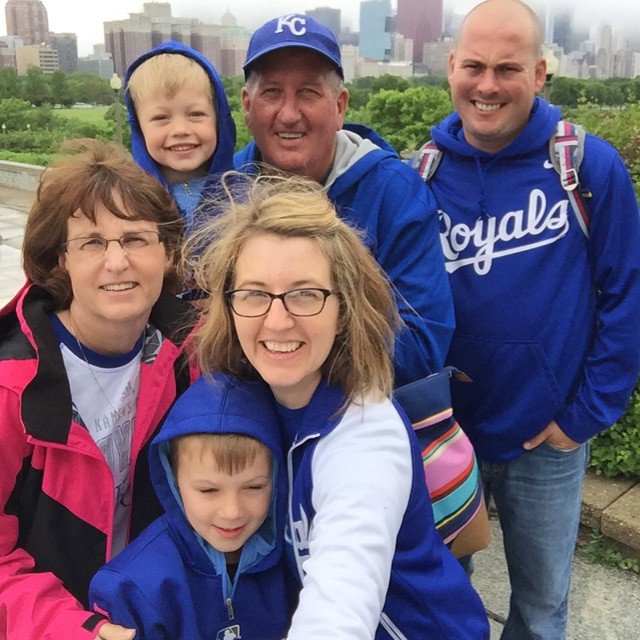 We then headed straight to Wrigley. We were about 5 hours early but we figured we could find a place to sit and eat and enjoy a few pre-game drinks.

Once we arrived at the stadium we figured we might as well get the "picture" out of the way before it got crowded or it started to rain again. 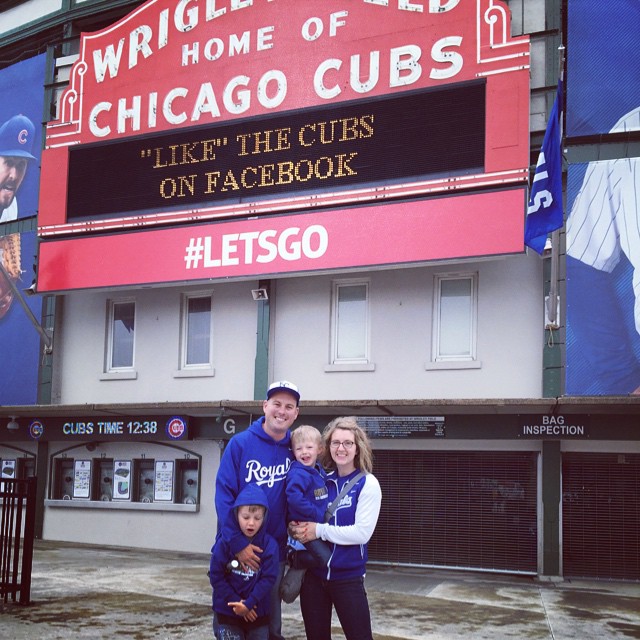 & then I took out my selfie stick to take a picture of all of us and some lady broke in and said something to the effect of "that selfie sticks have ruined people asking strangers for help when taking a picture", so I handed my camera over and this is what she took… 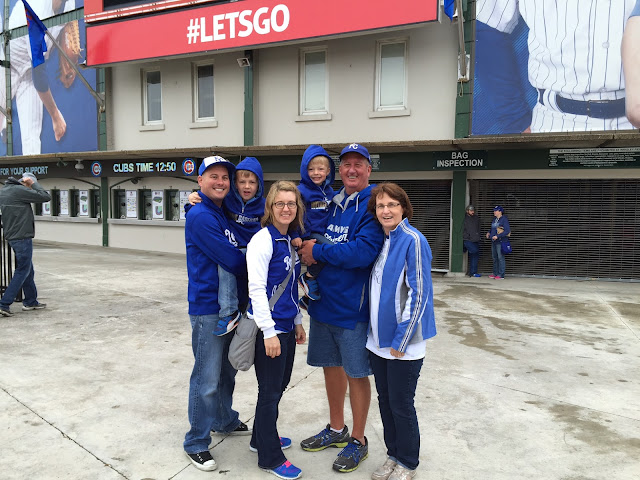 Now don't get me wrong, it isn't all bad BUT, the iconic Wrigley Field sign isn't even in the picture!!! I should have just selfied it.

The next couple hours were spent at a local bar and grill--kids were allowed. We found a table right in the front and next to Golden Tee which both boys learned that day. Kaden was surprisingly good at it too. 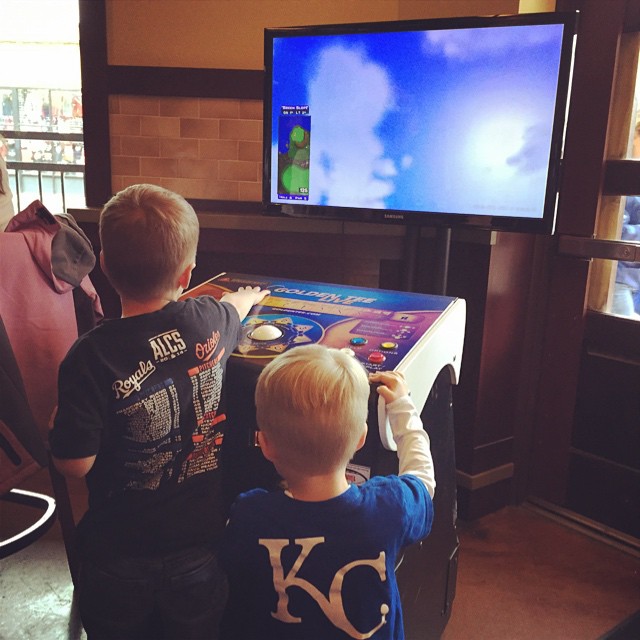 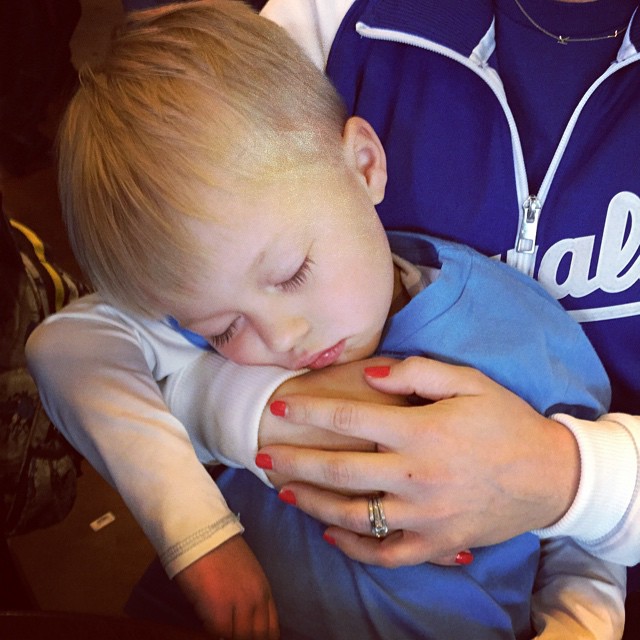 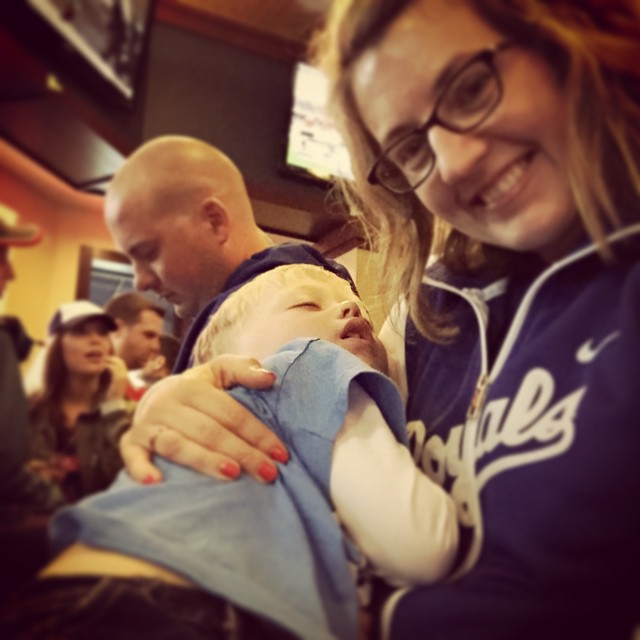 and then we found out the game was cancelled. We came all the way to Chicago, figured out the train system and all for a cancelled game.

We didn't let that stop the fun. We stayed a little longer waiting out the crowd, the boys played another game of Golden Tee and we had another round of drinks and chatted it up with Cub fans. & we had a special visit from Cousin Bill who lives in Chicago, it has been years since I have seen Cousin Bill, maybe like 20+... 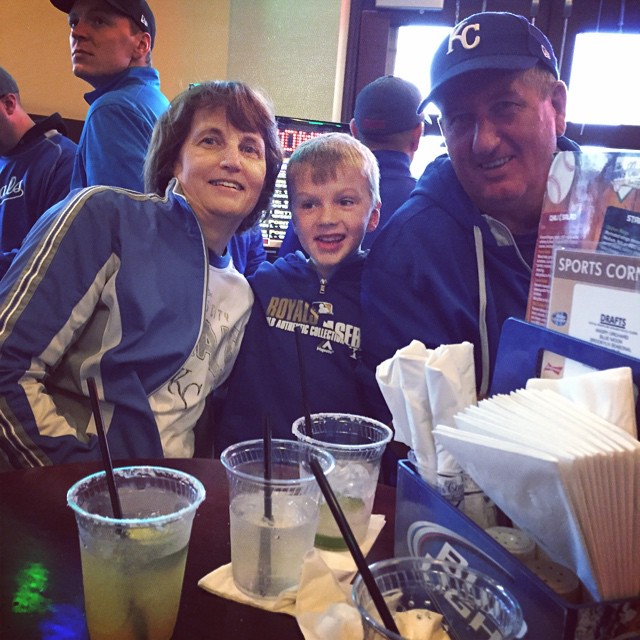 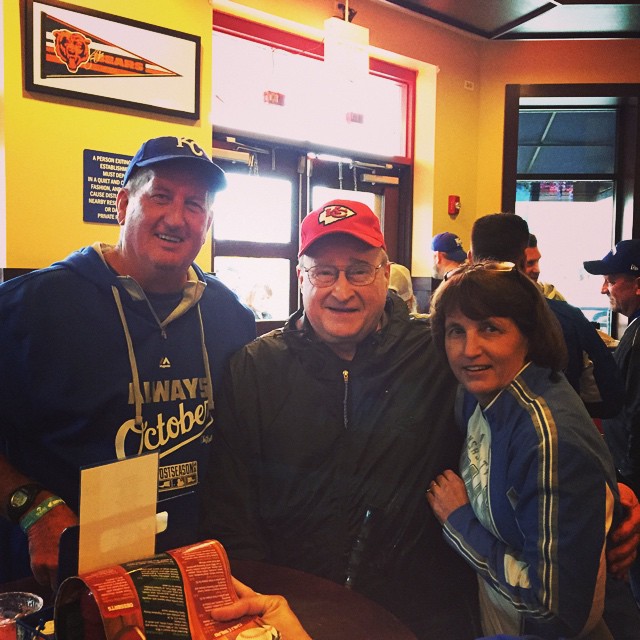 Once Logan woke up we walked down to Murphy's where not only 610 was broadcasting from but where Justin's buddy was & I snapped this awesome picture on the way back. 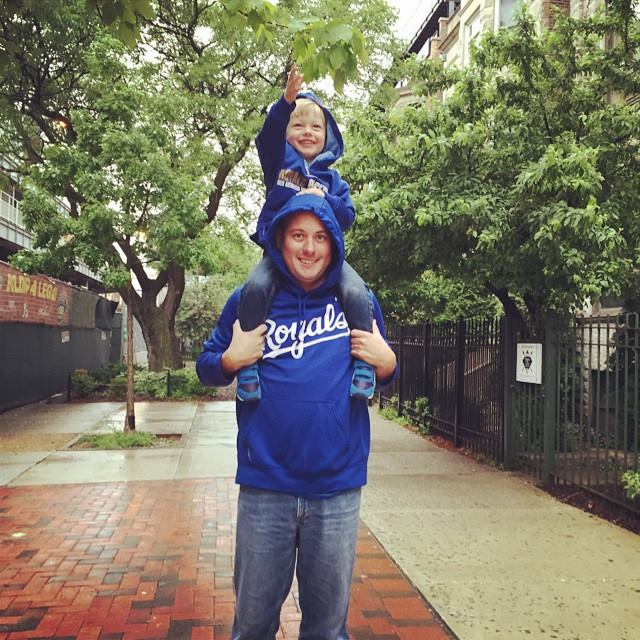 It was finally time to leave. To leave Wrigleyville and Chicago. 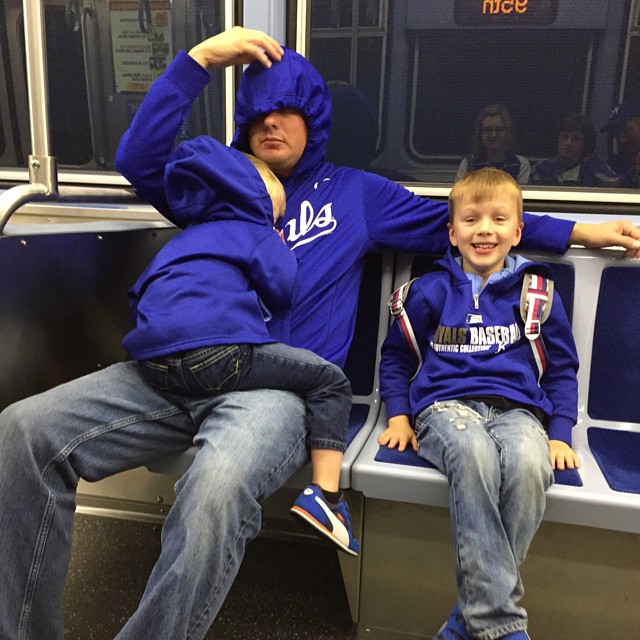 We drove 8 hours, went to a game that never happened and after stepping off the train and walking back to the hotel carrying Logan, I twisted my ankle and not just a little bit either. I could barely sleep or walk the following day and riding 8 hours home wasn't much fun either but we made it. Unlike Thursday night where the boys wouldn't ease up on the questions, the only "Hey, Mom," that I heard came when they were asking me to sharpen a pencil while they continued to color. They didn't really sleep a wink except for the last hour or so of the trip but didn't complain once---they were rockstars. & even with them being rockstars, we were all so very happy to see our city popping up on the horizon. 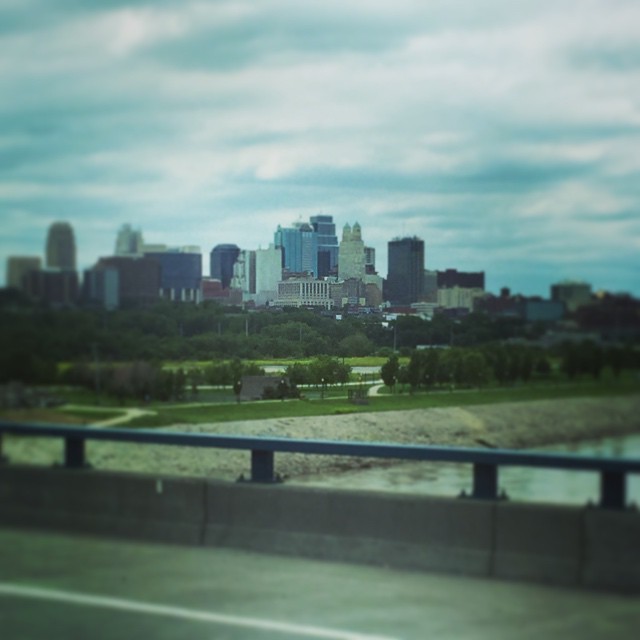 We did Chicago in less than 72 hours. And although the game might have been cancelled and we might be planning another trip back in September, we still had a great time and made so many memories. South Baseball Tour 2015 is in the books--kind of.
Posted by Kayla South at 10:41 PM