So since we came home a few days early from our staycation at the lake, we figured we should continue the fun and pack our days full of things we wouldn't be able to normally do once we went back to work. & pack them full, is exactly what we did.

On Thursday we spent pretty much the entire day at the pool, that is before we loaded up and headed out to the Royals game. Justin was wanting to spend his "Father's Day" at the K so who was I to get in the way of that. 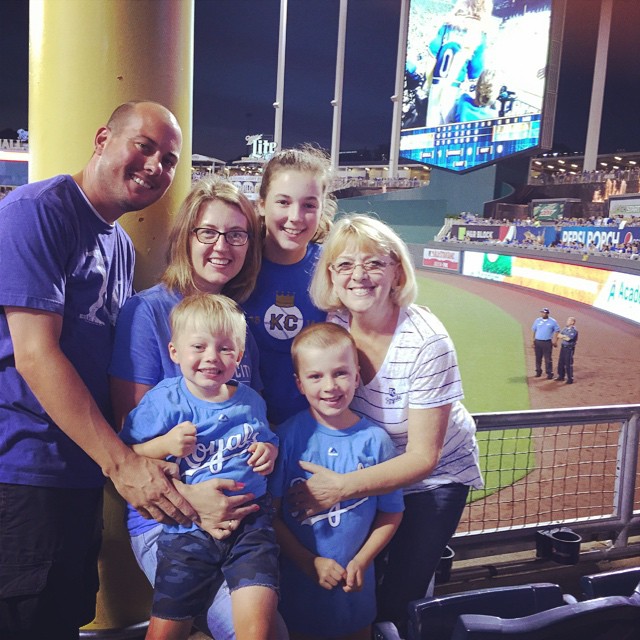 He found us some great tickets and we only had to deal with a few minutes of rain. The boys had space where they could walk around and not have to sit still in their seat but they were still anxious to get up and move around so we headed out to find Sluggar during the 4th inning. 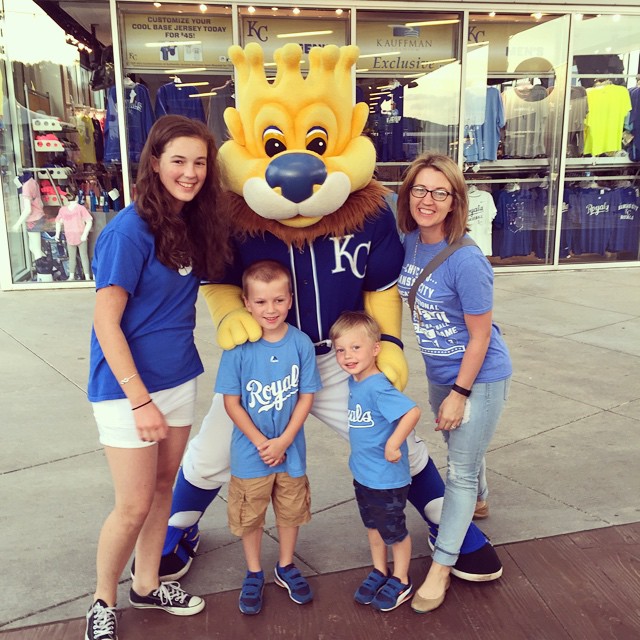 & on the way back we stopped to pick up some Dip'n Dots. Neither of the boys have had Dip'n Dots and to no shock to anyone, they loved them! 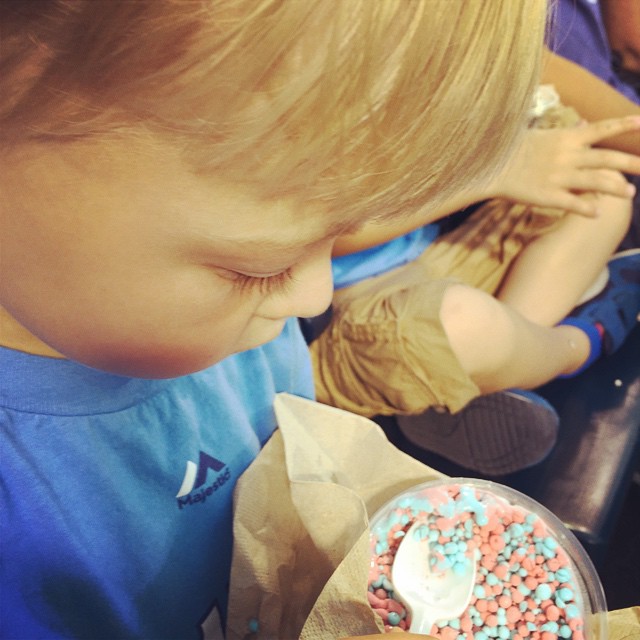 It was a late night for everyone but that didn't matter, only one of us had to get up and get out of the house by a specific time and that wasn't me, Leah or either of the boys.

So Friday rolled around and when we all finally rolled out of bed and got around we headed off for another KC adventure, the zoo. The last few times we have been to the zoo we have had a time limit on how long we could be there, not this day---we had all. day. long. 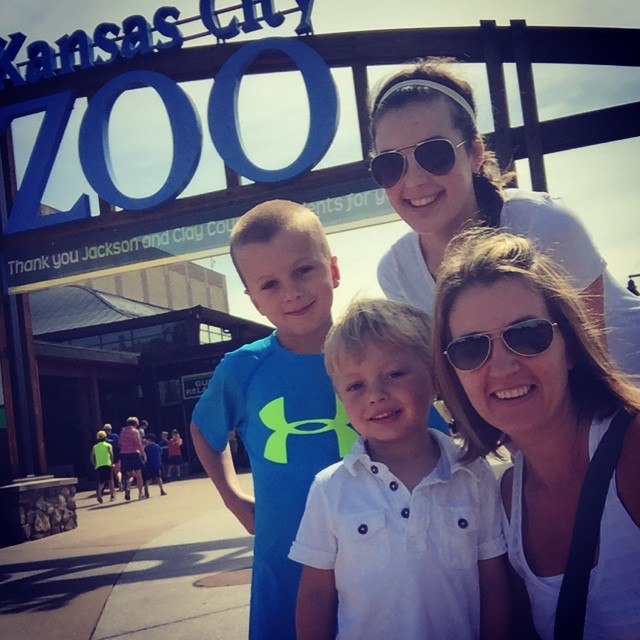 Our first stop was of course Nikita. We recently learned that our favorite friend at the zoo will be leaving us soon. I guess the female in the exhibit doesn't want anything to do with Nikita, he does tend to show off for everyone which is what we love about him but I can see a mate not really digging that. Anyways, they are looking to breed Nikita and will be sending him to North Carolina to a zoo where they hope he takes an interest to their female and make little Nikita babies! He seriously provided the best welcoming to the zoo with all his back flips in the water---we will miss him so much.

After watching Nikita for a little while we headed off to Australia, stopping at the new orangutan exhibit and at Tiger Trails. 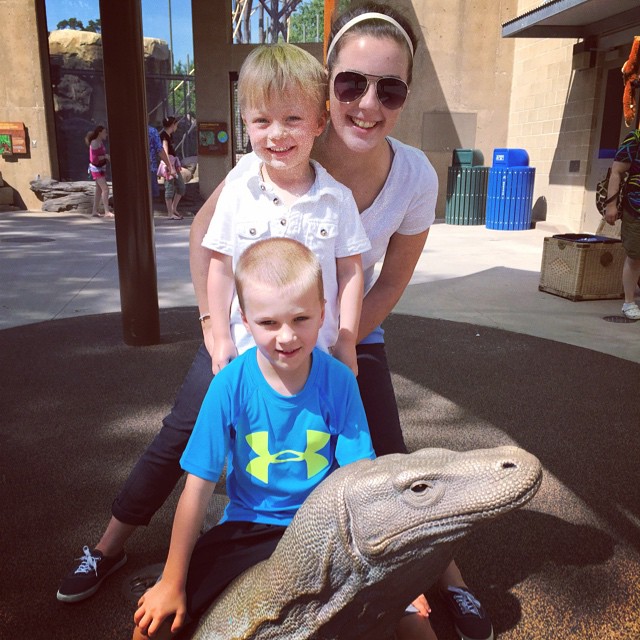 We rode the train and the tram to Africa which were all firsts for the boys since we typically walk but we wanted to ride the newER Africa Sky Safari and just went ahead and signed us up for a Friends of the Zoo pass that included everything---we do love the zoo & hopefully this will get us out there more!

And the selfie stick for the win again---love the older gentleman smiling in the background. Too cute. 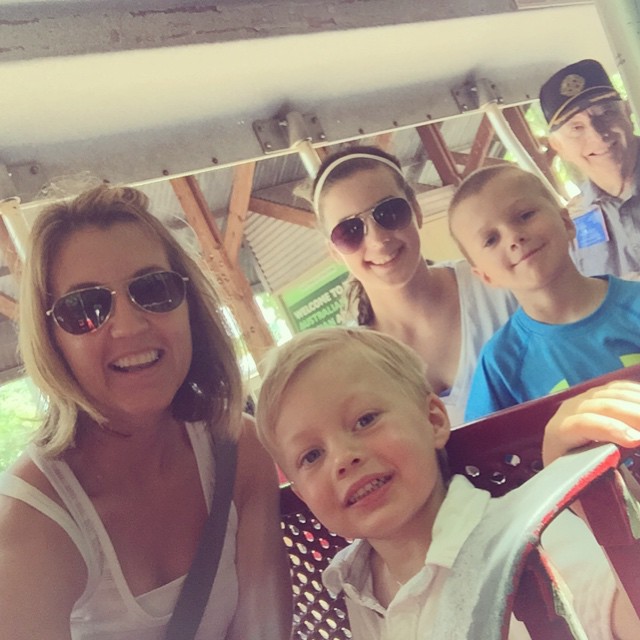 Most every time we have been to the zoo we have either done Australia and the Tiger Trail and called it good or we go to Africa---penguins get hit up on both trips, so does Nikita. We love walking around Africa but you never really get a chance to get up close and personal with the animals---the Africa Sky Safari changed all that. It was so incredible to be flying over the animals and seeing them from such a unique viewpoint. At one point I thought the giraffes were going to nibble on our toes but they weren't quite tall enough... 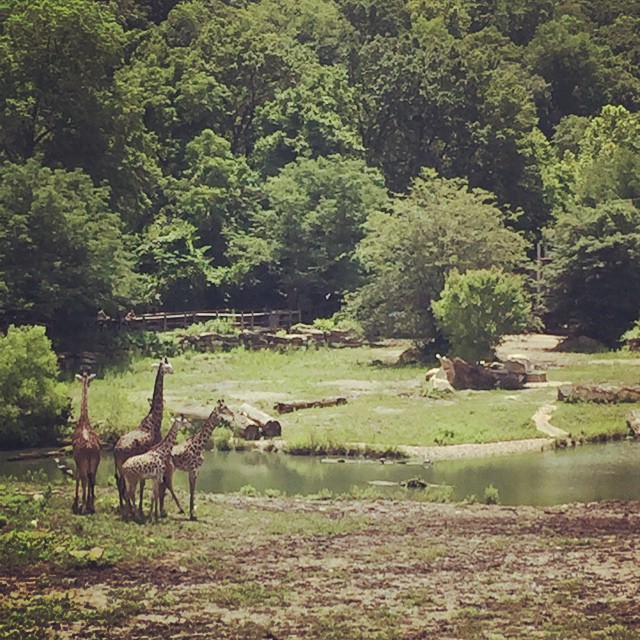 I wasn't sure how the boys would do either on the sky lift. for one, they had never been on something like this before, would they be scared? Would they fall off because they wouldn't sit still? And how do we ride it---do I ride with both boys or do I let one of them ride with Leah and if so, which one, Kaden the one that tends to want to do everything on his own or Logan the one that would sit still and listen to Leah. Kaden was taller and could get on more easily by himself where Logan would need help. I tend to overthink things, this being no exception but in the end, the decision was made for me. Kaden was technically tall enough to ride on his own (never would I allow that to happen) but Logan had to ride with an adult. So Kaden jumped on with Leah and Logan with me. 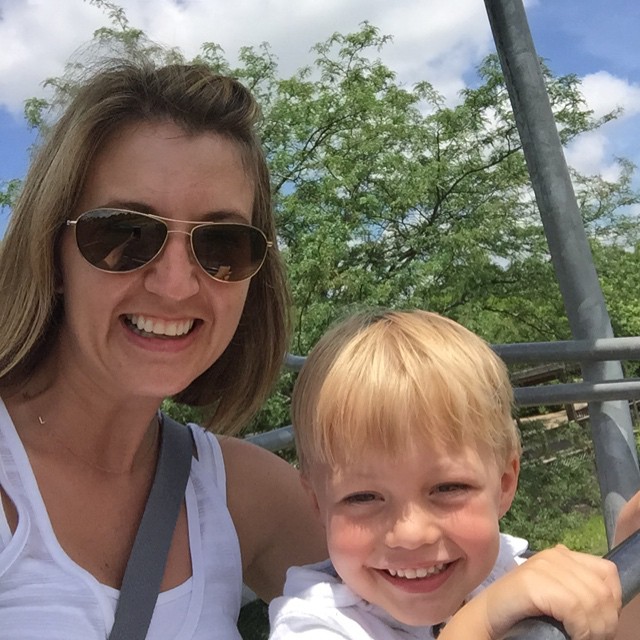 They both thought it was "SO AWESOME" that we rode it back too. And even though it looks as though Kaden is sad in the below picture, he was quite the opposite, just had something in his eye. Leah actually said that Kaden was taking everything in and didn't want her to talk to him so he could concentrate. 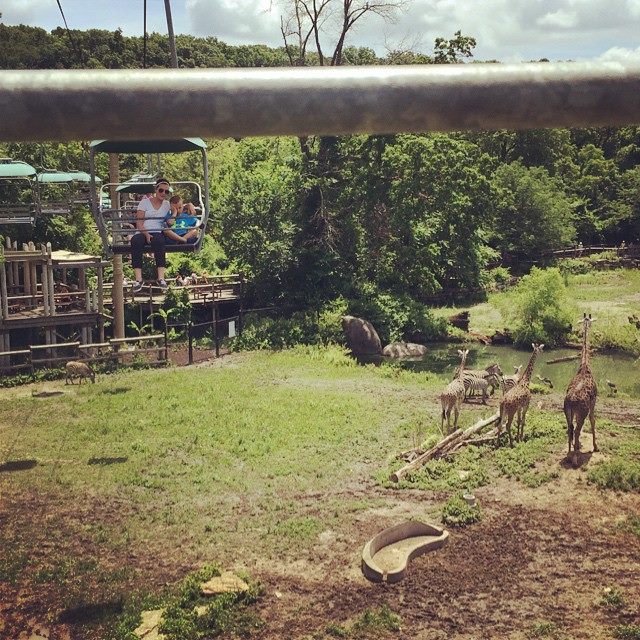 We ended our trip to the zoo with a ride on the Merry Go 'Round. I seriously can't get enough of these kiddos and the day we had. It was pretty special and just how we needed to end our vacation. 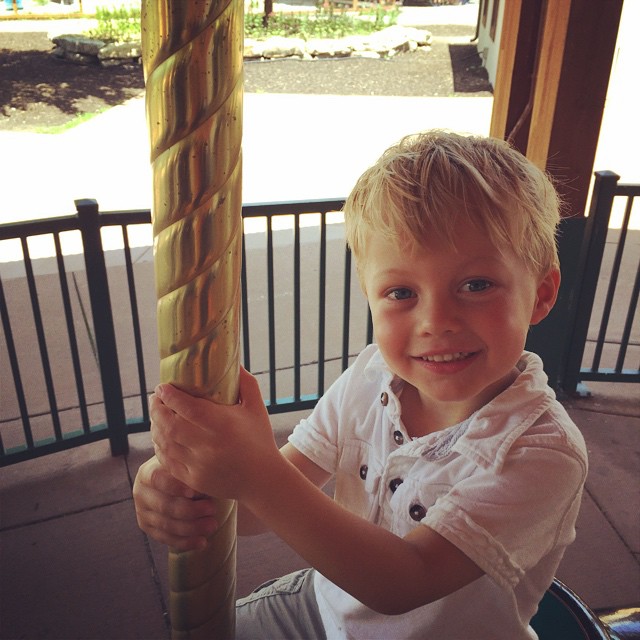 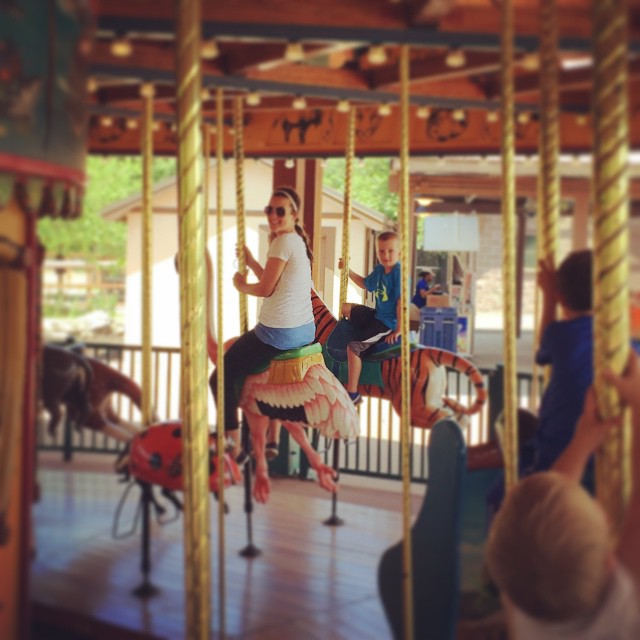 Our staycation officially came to an end the following morning and there was only one way we could celebrate such a wonderful relaxing week with the ones we love and that is with a trip to the BEST donut shop in the country--John's Space Age Donuts. Yum. 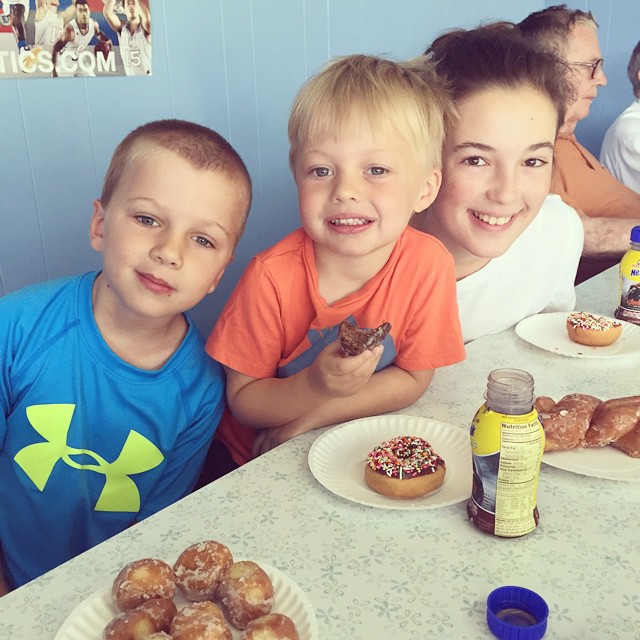 And of course, a trip to John's Space Age Donuts would not be complete without a little hill running. They boys love running around in this little area next door to the donut shop. It does make for a great spot to sit, relax and take it all in. 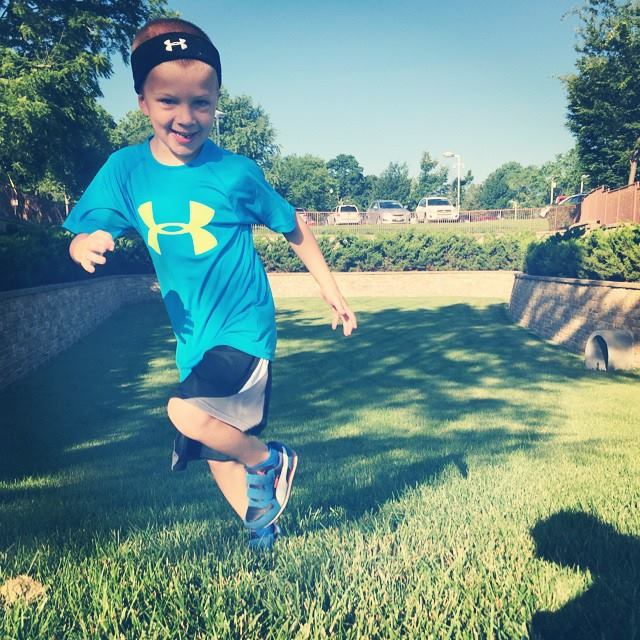 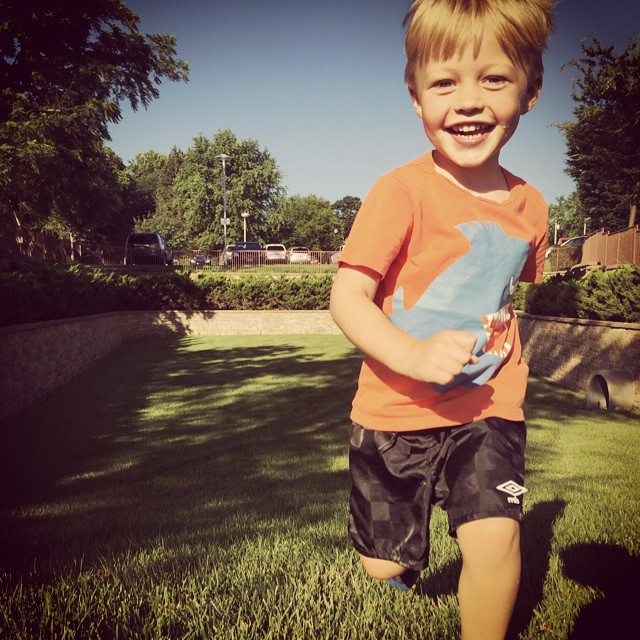 So there you have it--The Great South Staycation of 2015. Might not have been what we had planned for but it certainly gave us everything that we needed.
Posted by Kayla South at 10:24 AM