We are very fortunate to have a place to get away from all the hustle and bustle that is only a few hours away and more appreciative now than ever for our little cabin at the Lake of the Ozarks. Having just canceled our Disney cruise, I didn't really have the energy to plan anything else so we marked our family down for a week stay at the lake.

Vacation week was upon us and instead of packing swimsuits, summer dresses for me, nice clothes for the boys, we packed swimsuits and lounge clothes---which actually is way better than summer dresses.

We were a little worried that we might need to take two cars seeing that we had three kids and a dog that was headed down with us but I was able to do a little magic when it came to packing and off we drove, in one car. (Brodi doesn't get to go to the lake very often with us because he gets really bad hots spots and it would be torture for him. Stoli, well, she is happiest when basking in the sun.) 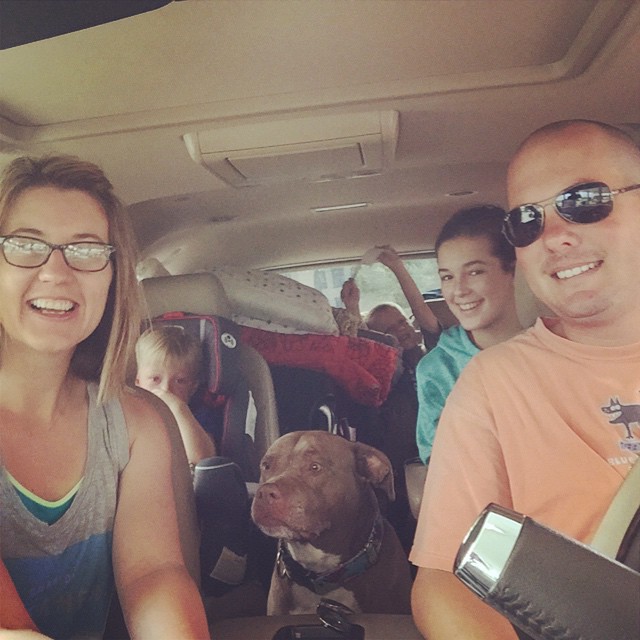 The weather wasn't looking too promising but we were keeping our fingers crossed the sun would grace us with its appearance more than once & that the rain would hold off for the evening. As soon as we arrived I got to unpacking, Justin took on the yard and the boys fished out their swimsuits. I could barely get mine on before they were pulling me out the door wanting to head down to the water. (We have a couple NO EXCEPTIONS rules---life jackets on at all time when on the dock or near water & no going to the dock without an adult. Safety first.)

As soon as we got down there I made them take the obligatory lake picture. We have done this picture for three years in a row now and they'll be taking this picture every year from here on out if they want to enjoy the lake house. 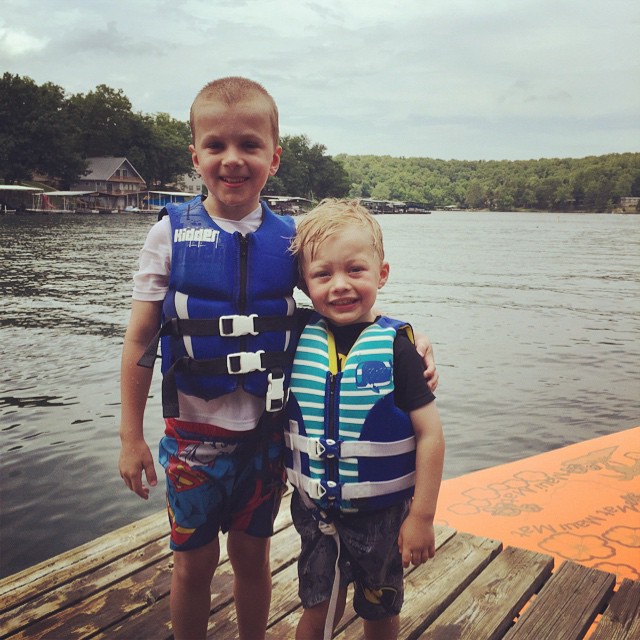 We were excited to see that Adam and Becky had donated the Maui Mat to the lake and left it down for everyone else to enjoy. This mat, if you don't know, can hold 1600lbs above water and allows for the boys to run and jump off of it into the water. This was best case scenario for Logan because he loved EVERYTHING about it. It was just what he needed to feel comfortable in the water and eventually comfortable enough to jump in. 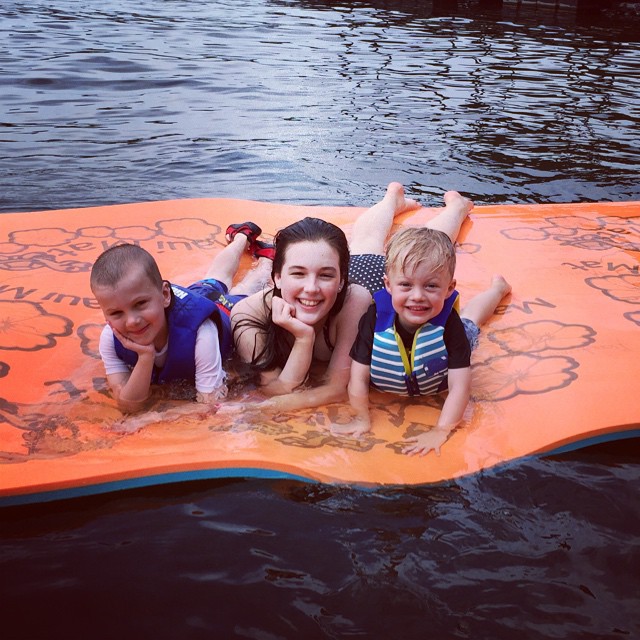 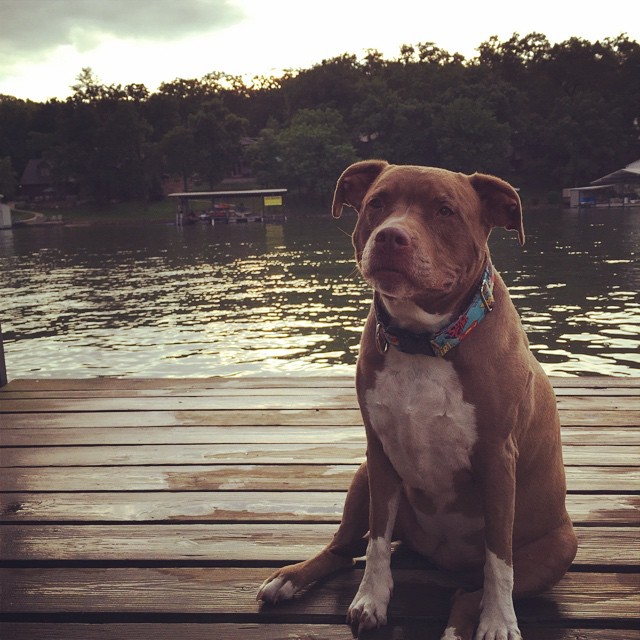 A couple of the days it rained more than we would have liked to have seen but that only made us venture out and try a few new places that we wouldn't normally have gone too. That's a lie, we always go to the outlet mall, if we are there for more than 3 days or it rains. Miner Mike's was new to us---the boys ran around in a giant hamster wheel playhouse and then played some arcade games with Leah. We also ate at a new to us restaurant--JJ Twigs--which is known for its BBQ and pizza, we had pizza and it was delicious and we will certainly be hitting that up again. 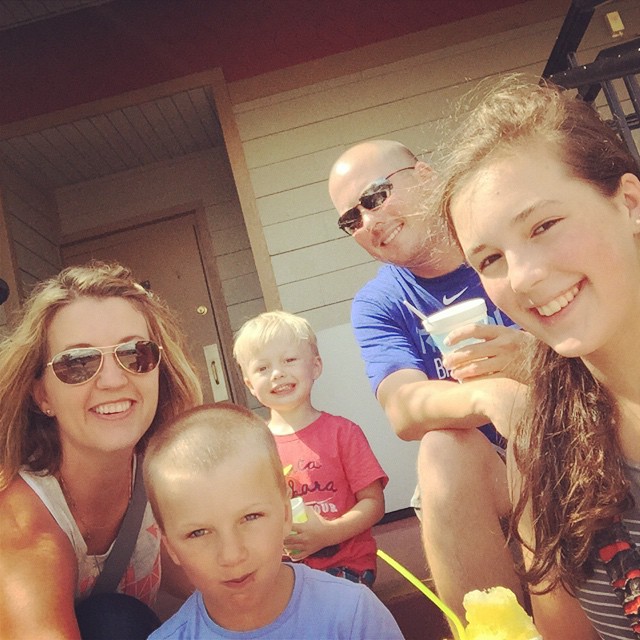 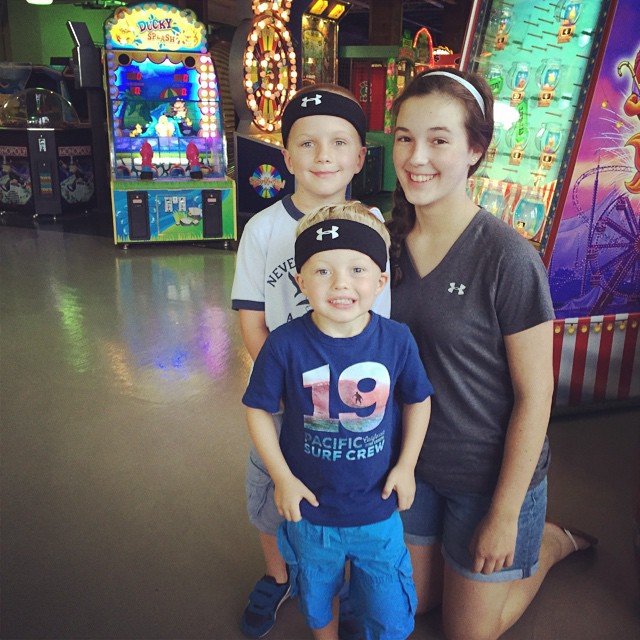 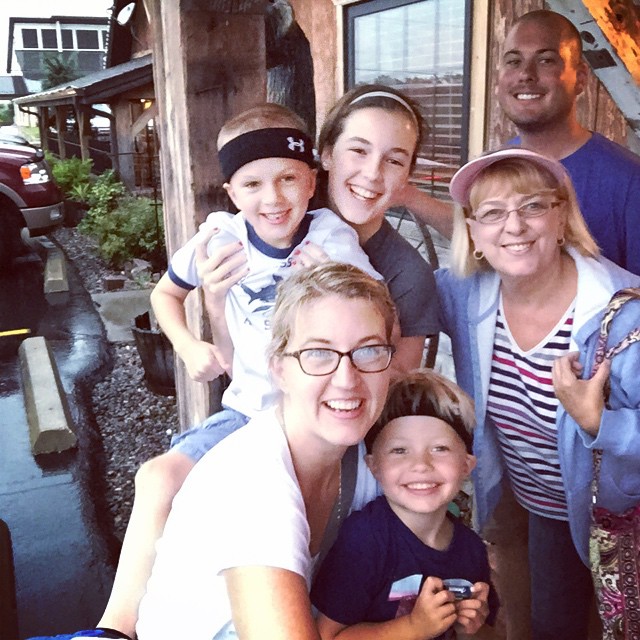 The sun finally made another appearance so we raced down to the water only for Kaden to lose his first tooth. And now it sits at the bottom of the lake. I had seriously just gotten done taking this peaceful shot of the lake when he started hollering that he lost it. Sure as shit, he did. 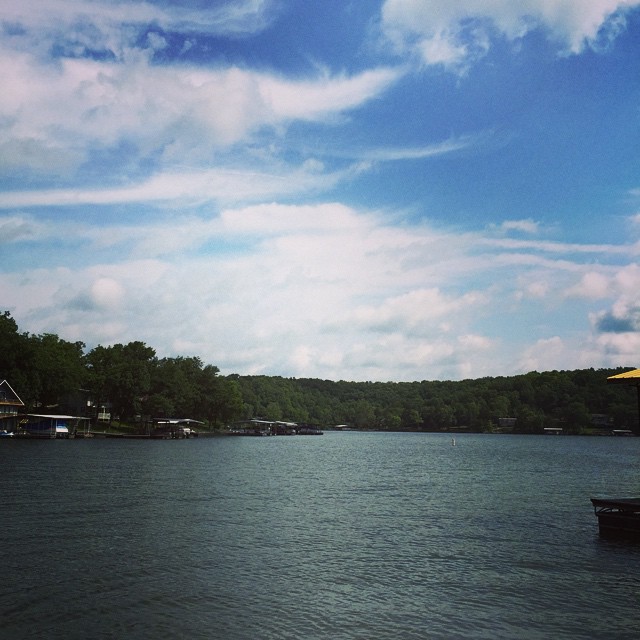 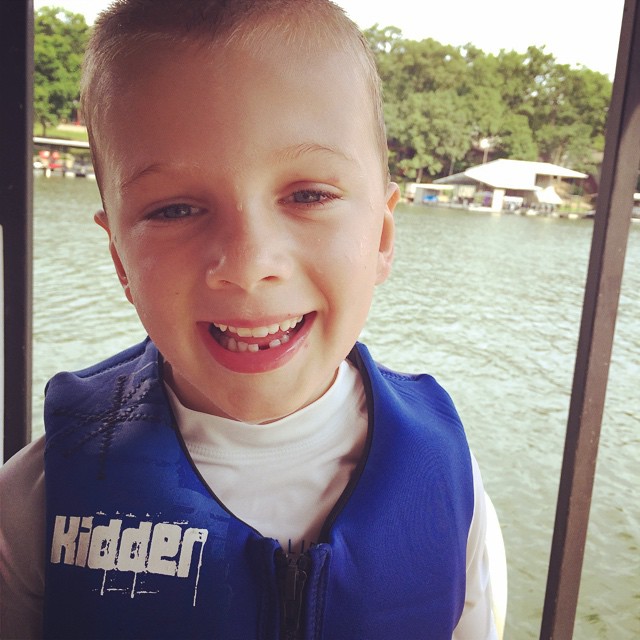 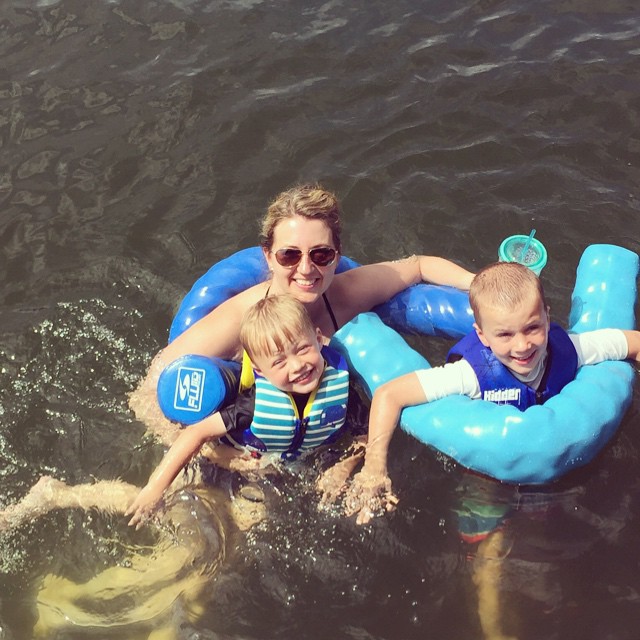 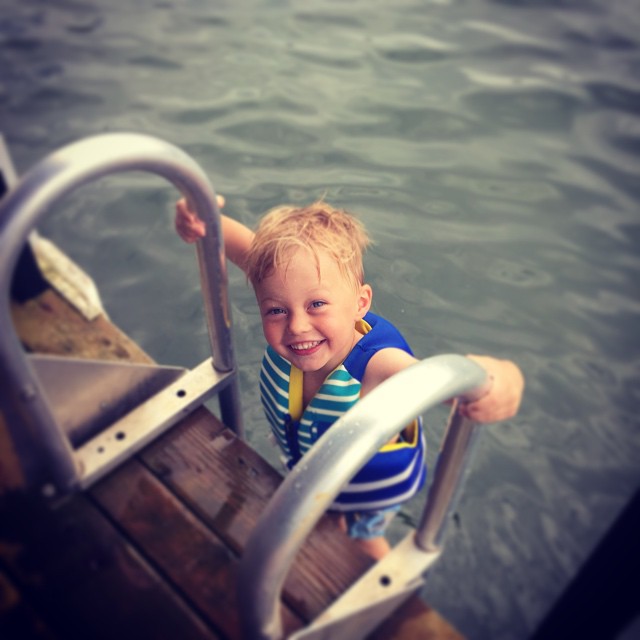 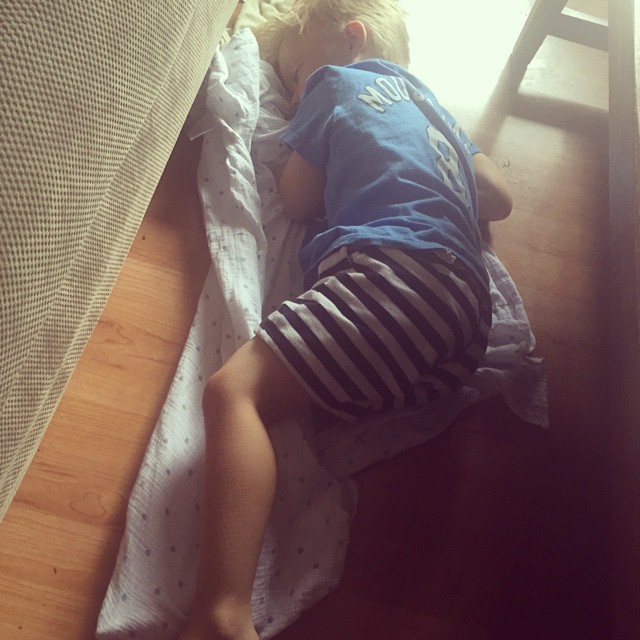 He tried so hard.

& on the last day, well really we still had three days left, we decided to head back to KC. The weather was calling for more rain at the lake and back in KC it looked sunny and nice so we called it good. We spent the morning cleaning the cabin and getting everything ready for us to head home and at lunchtime we jumped in the car and headed out for one last adventure--an indoor water park, what else could we do, it was still raining. We arrived at Tan-Tar-A, grab a little grub and then turned the kiddos (and Grammy) loose. We could hardly pry the boys off of the slides... 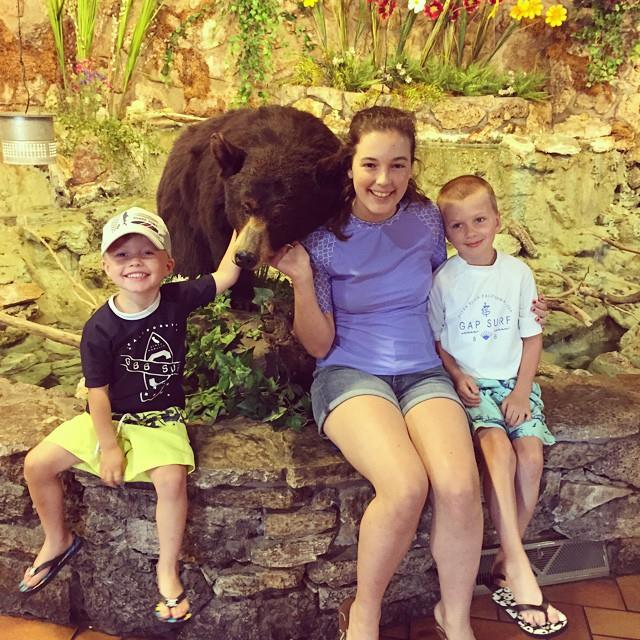 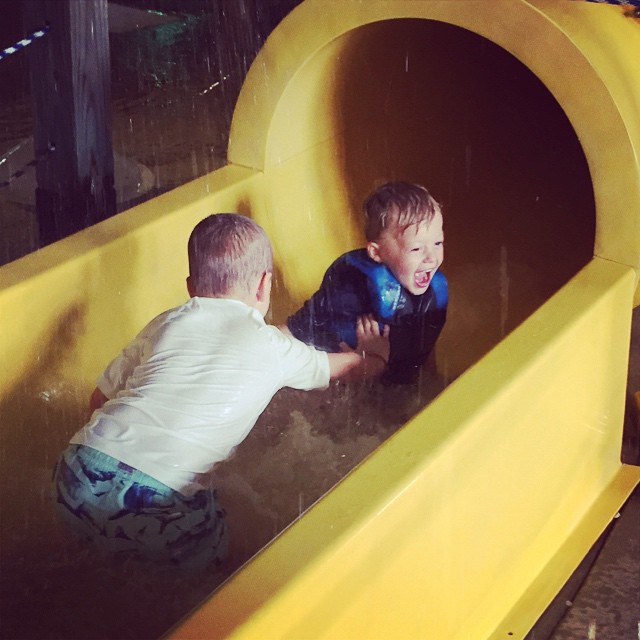 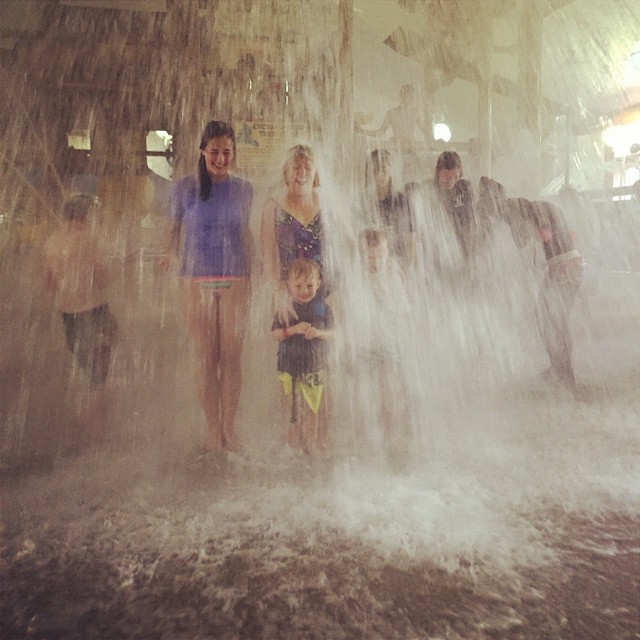 I mean, really, is there a better way to end part one of our staycation? We don't think so.