When we asked Logan what he wanted for his 4th birthday we were not at all surprised by his request. A Batman bike with pedals.

You see, Kaden, got one for his 5th birthday and Logan was handed down the balance bike. & it didn't take long until Logan knew exactly what he was doing on it either. He was cruising and balancing all over the place so it only made sense to give the real bike a try. The problem with his request---the kind of bike, BATMAN.

I searched high and low but couldn't find any sort of Batman bike that would work for his size--we needed a smaller bike since he is only 4 and he doesn't have the Papa Hartley height. The only bike that I could find was a Spiderman bike so I went ahead and just got it banking on the fact that his brother had a Spiderman bike and now so does he. Fingers were crossed.

His birthday week weather had pretty much nothing but rain in the forecast so we decided to go ahead and give his bike to him the night before in hopes that we could test it out. I ran home from work, told the boys I had a few things I had to put away and disappeared into the basement. I quickly, no thanks to shotty directions put the bike together and tried to sneak it out to the driveway but I got caught. Luckily they didn't mind staying inside for a few more minutes... 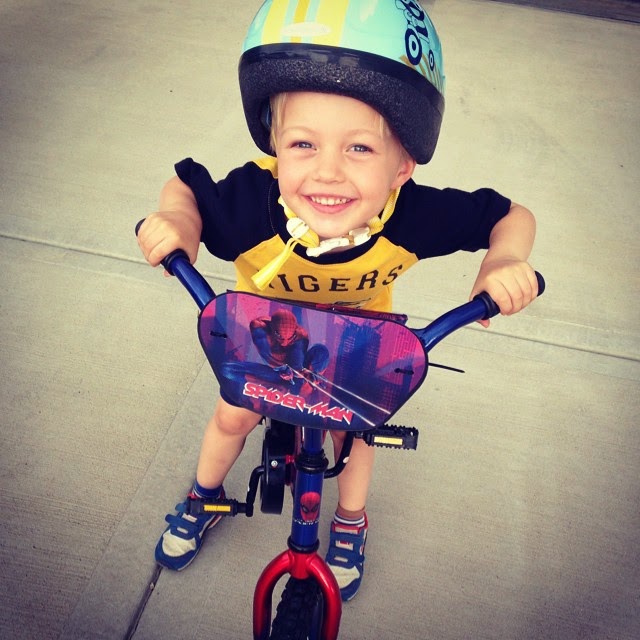 And the fact that it wasn't Batman was never an issue, he was so excited that he had a Spiderman bike just like his brother!

We did have to do a little tweaking and lower the seat to the lowest possible position as he wanted to make sure his entire foot could touch the ground. And although he wasn't totally on board with giving it a try, a little timid, he left me hold onto the back and he started pedaling. We barely got one lap in around our cul-de-sac and the rain started coming---downpour actually and back to the garage the bike went. Sadly, it sat there for a few more days and then on Mother's Day, in between more rain, we pulled it back out and went back to work.

And no joke---this was probably our 4th attempt. I started letting go after #2.


We still have a ways to go before he feels totally confident, not to mention I do too but what a great start. I swear, these balance bikes are just the best & although I have never tried teaching a child to ride a bike without having used a balance bike before, I can't imagine it would be easier than this was. In fact, I would think it would be a whole lot harder and probably frustrating for everyone.

So proud of our lil' man. He needs to stop growing up but I guess he just doesn't want to be left behind.
Posted by Kayla South at 6:00 PM