We celebrated Logan's 4th birthday this past weekend surrounded by friends and family & against my better judgement, we had it at our house. I kind of thought we were done with hosting birthday parties at our house, Kaden's last one was at SkyZone and it was AMAZING---very little to do on my part, kids all had a great time & there was no clean up. I figured that when we brought up Logan's party and threw out a couple ideas that he would jump, pun intended, at SkyZone or at Deanna Rose but he INSISTED on it being at our house. I kind of groaned but I agreed because Kaden had his 4th birthday at the house & I wanted to be as fair as I could so we moved forward with his request.

Up next---the theme. Logan requested Batman. Or Superman. Or Spiderman. He wanted Superheroes. Last year we had "Bad Guys" which is pretty darn similar and all I could see for the future, the next 5 or so years being some sort of Superhero party.  Times that by two and we have a whole lot of Superhero parties to plan. So I did what most all parents would do, I steered him in a different direction & threw out "puppy party" & he took the bait. Hook. Line. Sinker. & since he was ALL about it, I didn't feel guilty in the least bit.

I found the cutest invitation on Etsy from Papernote & Co -- a lil vintage dog invitation. I asked for a few additions to be made -- Come. Sit. Stay. 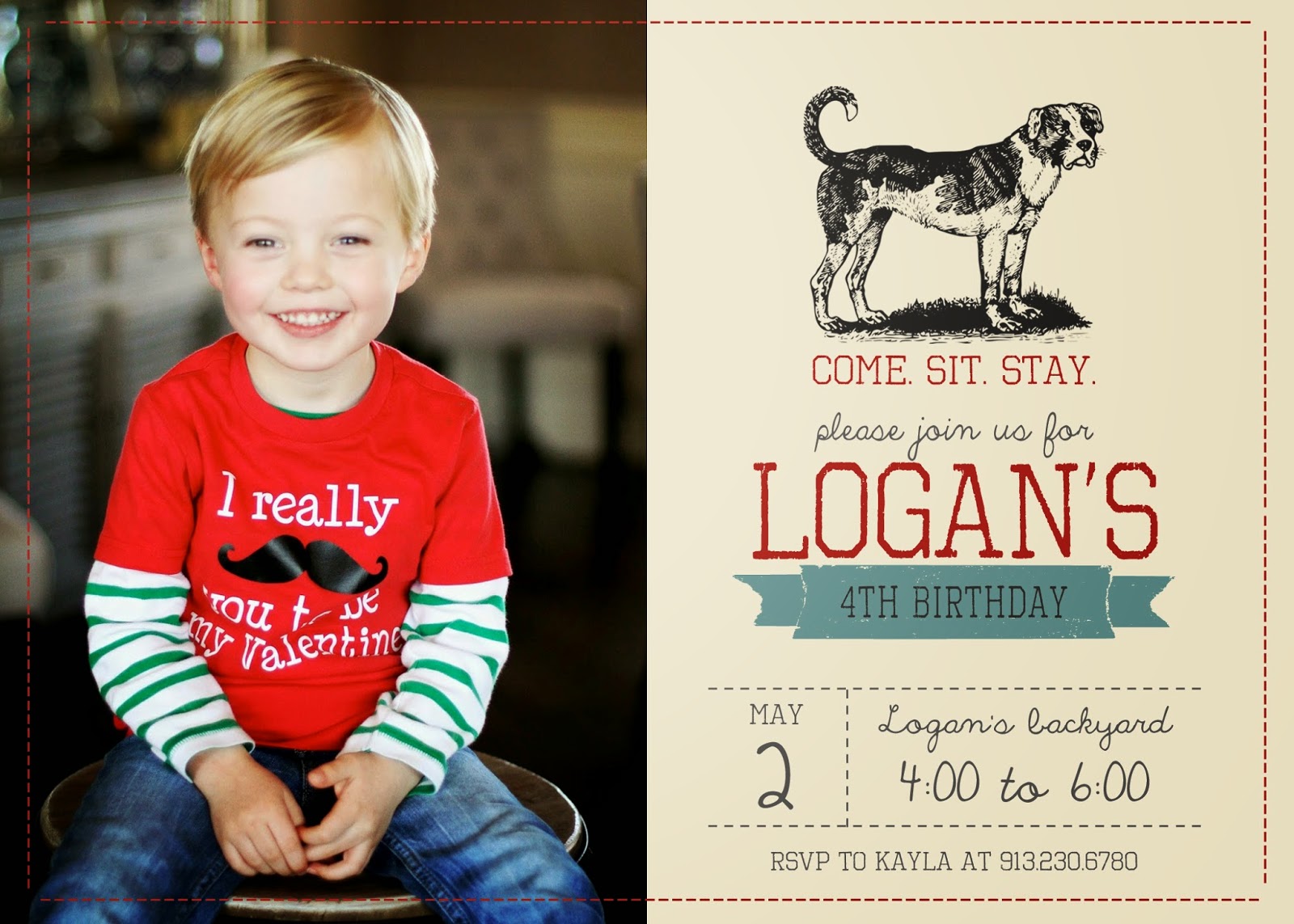 & from this invitation we pulled together the rest of the party. We started with the idea of a BARKery with lots and lots of yummy desserts. & then filled in the main course with hot DOGs and corn DOGs---fruits and vegetables were also available just to ensure something healthy was on the menu. 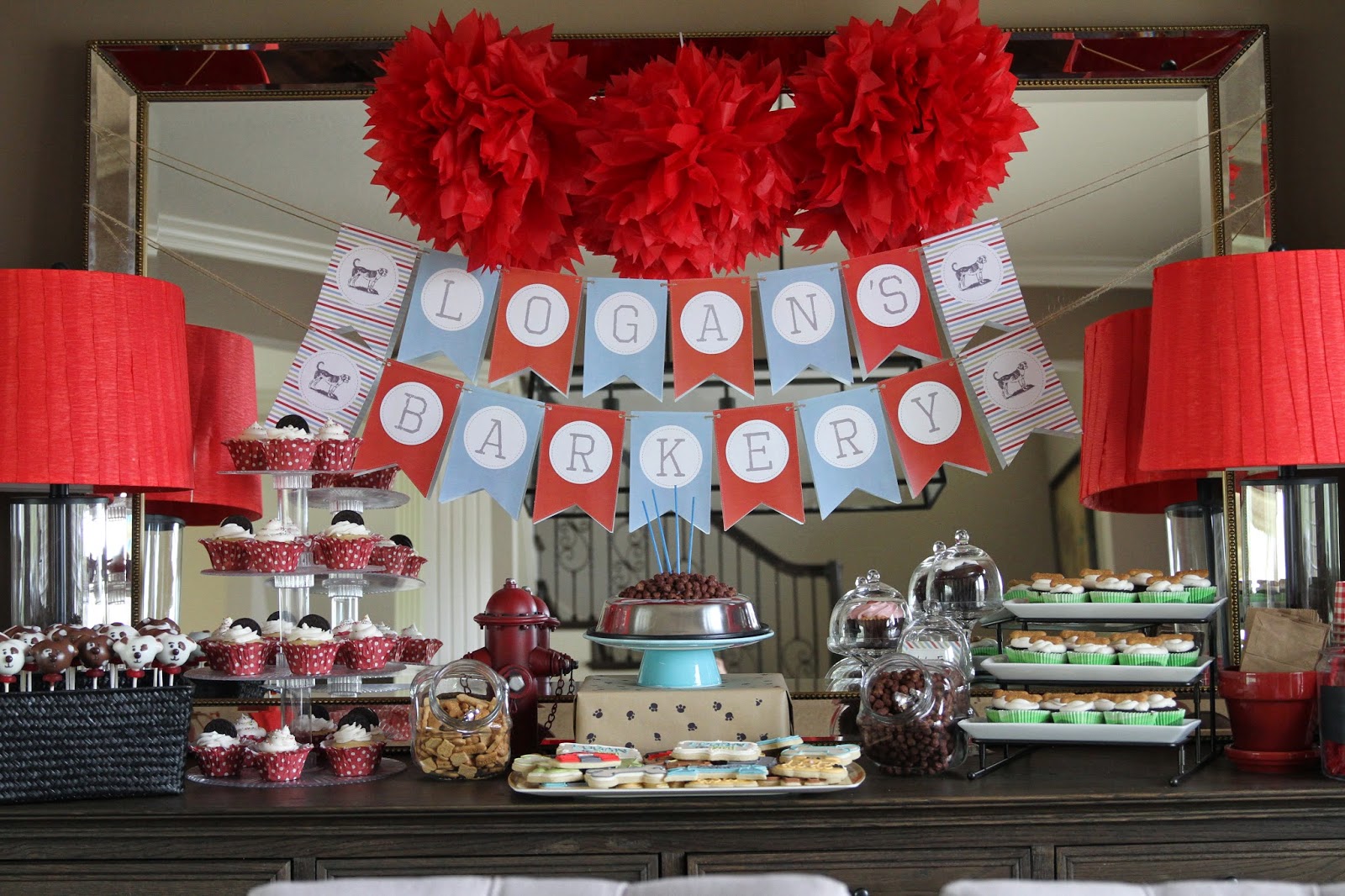 A few weeks back Food Network sent out their monthly magazine & it was all about the cupcake. 50 cupcakes to be exact---they each started with one of three basic recipes and then you made a few tweaks here and there to create the oh so delicious cupcakes. Now remember, I can bake, may not cook, but I can bake--and the boys and I decided to give a couple a trial run which we ended taking down for my Dad's 60th birthday. They were decent but the icing just wasn't what I was looking for so we made a few tweaks and moved forward with three different cupcakes---a Heavenly Creme Filled cupcake from Pioneer woman with her cream cheese icing and topped with a Scooby Snack, the classic Birthday Cake cupcake with the same cream cheese icing topped with sprinkles and then a Stuffed Cookies & Cream cupcake with cream cheese icing topped with an Oreo cookie. And I will admit, they were all delicious--I had multiples of each. 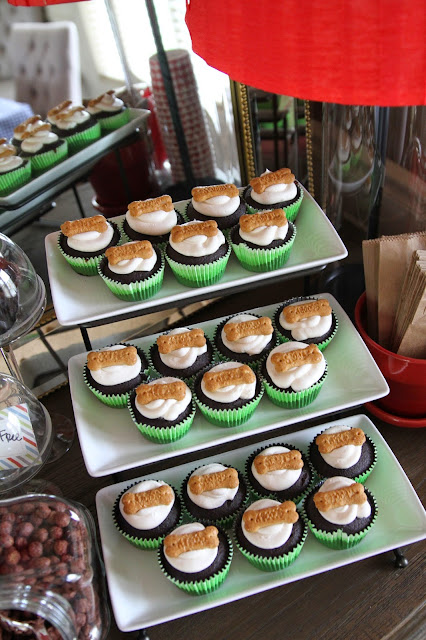 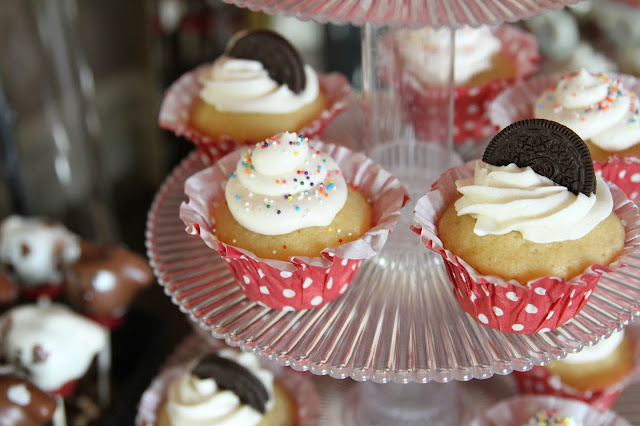 But our BARKery wouldn't be a BARKery without a few more yummy treats. I reached out to MoMO Roo, a favorite of not only mine but my party guests too, and she created these adorable and oh so yummy doggie cake pops. I mean seriously, they were decked out with spots, floppy ears and collars. Shanna is one talented lady! 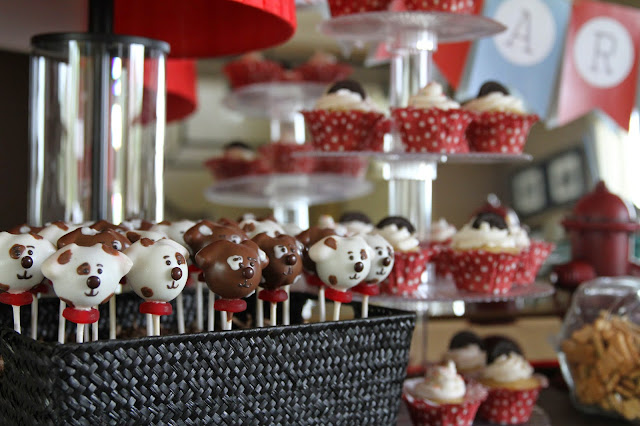 & of course we had to have cookies from Icings By Ang. I had sent her a message with our color scheme and that we had two dogs a golden retriever and then a red nosed pit and asked if she could make the cookies resemble our dogs--you know in color. & she did. Again, I mean seriously, how awesome are these cookies!?!? 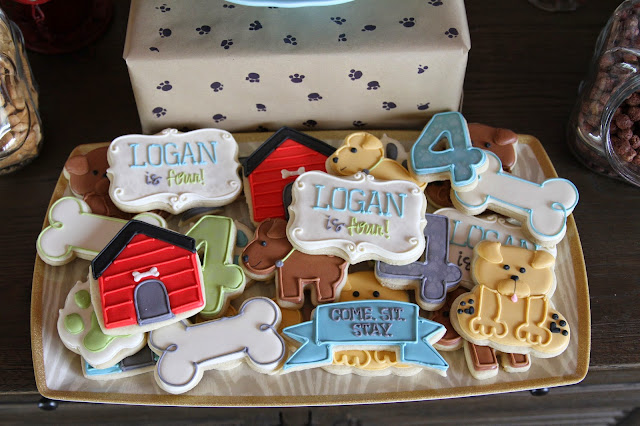 We finished the BARKery off with some fetch sticks (red vines), some Scooby Snacks & some Cocoa Puffs. Last but certainly not least, Logan's cake, made to resemble dog food. It was actually quite easy and tasted pretty yummy. I baked a small cake in a glass container that I had sprayed pretty heavily with some Pam and when it was done, I popped it over into the dog bowl, added a few Cocoa Puffs to fill in the holes around the cake, iced it and then covered the whole thing in Cocoa Puffs. 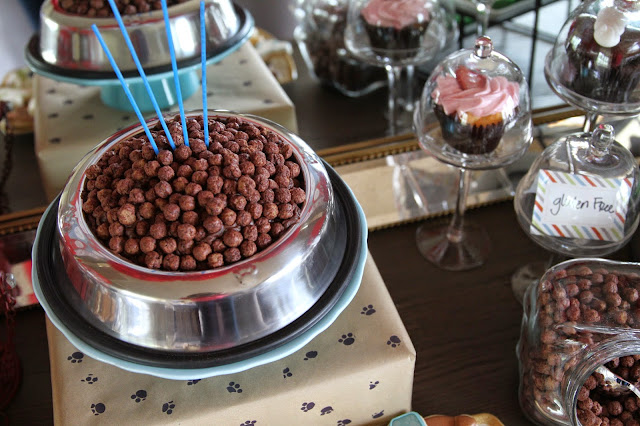 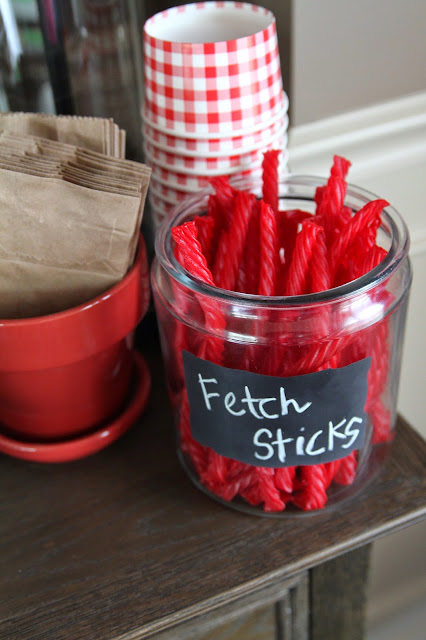 For about the last two week or so a new package would arrive from Amazon Prime---love PRIME---daily. It was like opening presents at Christmas time and not knowing what was inside. I opened one box up and was severely disappointed--the brown paper sacks that I thought were lunch size, were actually about a quarter the size and way too small for the party favor "doggie bags" I had in mind.  I now had 100 mini bags and needed to figure out a way to use them or they would just go to waste. A little searching on Pinterest and I found a dog puppet, they had used lunch size bags but the mini bags would be just perfect for our little handed guests. 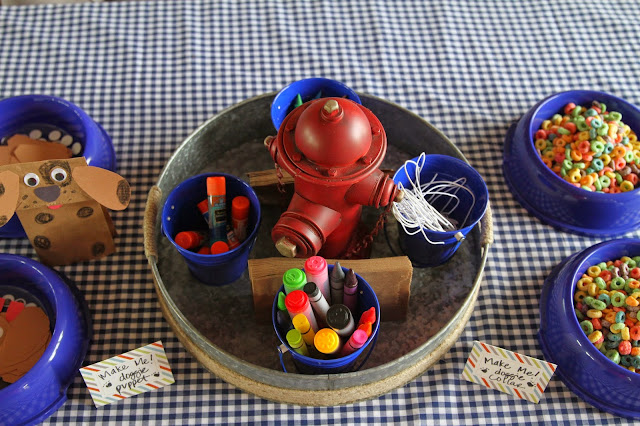 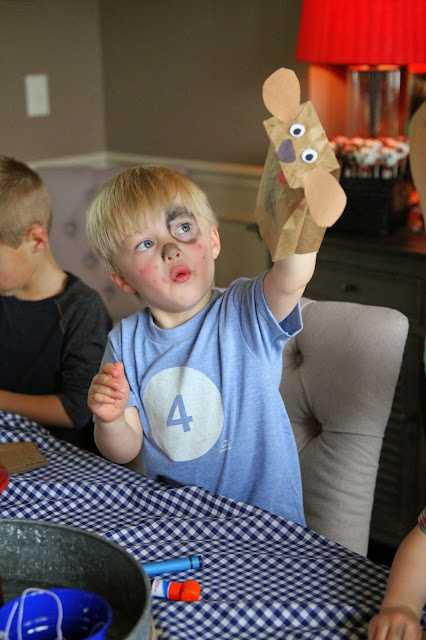 And at the last minute---I'm talking 24 hours prior to the party---I figured I would add a second activity that being, edible dog collars--think candy necklace but with Fruit Loops. I wasn't sure if any of the kids would even want to stop playing outside to come in and make a puppet or a dog collar but they ALL were on board and it was so much fun to watch them all create their own puppet/collar, especially the older kids that went for it all on their own. 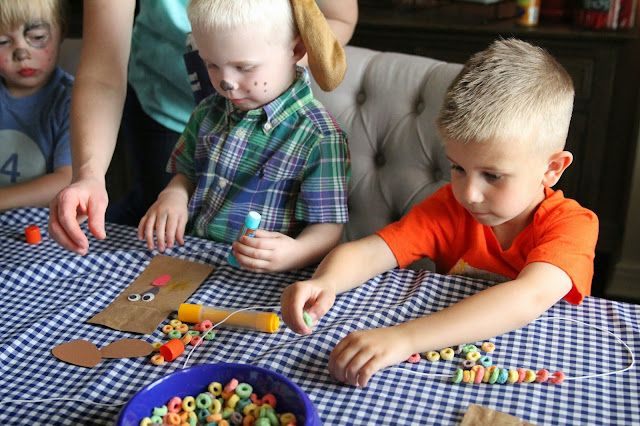 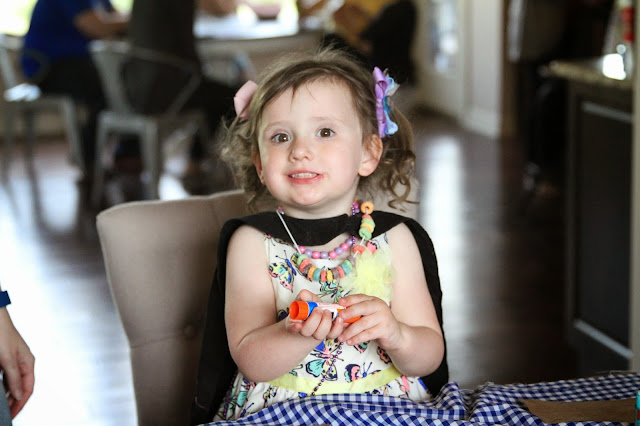 When I was first throwing this doggie themed party idea around I ran into a local grocery store and found blue dog bowls in their dollar isle, they were perfect but we had one little problem, there were only 8. I was hoping to have enough for each kiddo who came to the party but the store stated they didn't have any others but suggested that I call a few other locations and check. I did, and two stores basically said no as soon as I asked, I don't think they wanted to check but then I got lucky and this super nice lady went above and beyond for me. She had a few in her store but could order me as many as I wanted. I'll take 18, Thank you very much!

So what was I going to do with all these dog bowls--send them home as party favors? Why yes BUT not before having the kiddos eat their dinner out of them! And yes, I got a few looks from multiple parents but in the end, most of those same parents were digging the idea, the bowls didn't blow away, were easy for the kids to carry and the food stayed on the plate too. It really was pretty cute seeing all the kids with their blue dog bowls chowing down. 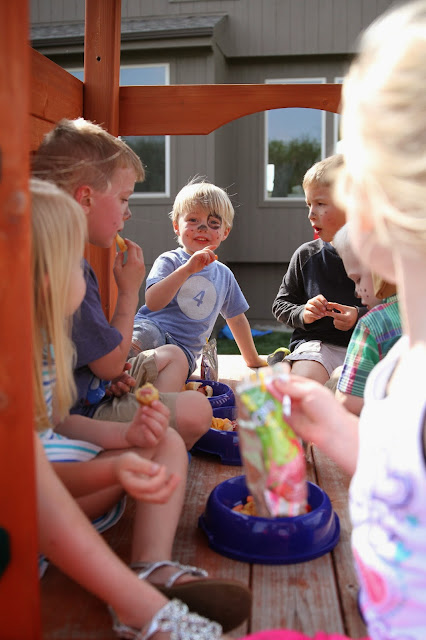 After everyone ate we sang to the birthday boy, who was very aware of the fact he didn't get to blow his candles out himself last year and made it known to everyone that it was HIS turn this year---so I went around and told Kaden, and Colton and Jake that they weren't allowed to help, that Logan gets to do it all on his own this year. They were all bummed but they were good little boys and allowed Logan to have his time in the light. 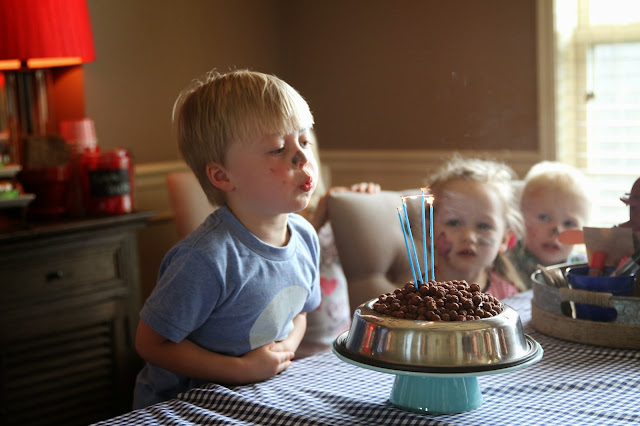 We barely finished the song before all the kids were snatching treats and on their way back outside for more play. Balls were being kicked. Swings were being swung--as well as kids. The bounce house was never empty. Kids were everywhere and it was so awesome to see and hear. 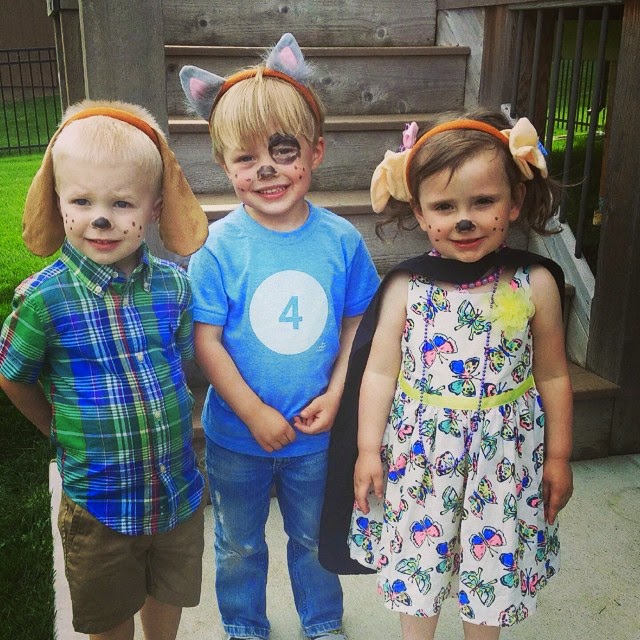 Parties are always a catch 22 for me, I dread having it at our house, cleaning up afterwards, all the prep that goes into planning it, knowing that I won't finish a single sentence that I start with anyone during they party but the actual PARTY itself, it was so worth every ounce of effort and all the missed conversations. The smiles on all the kids, the parents and most importantly, the birthday boy himself-- makes it all worth it. He LOVED his doggie party, he loved having all his friends over to celebrate him & we LOVED seeing him so happy. 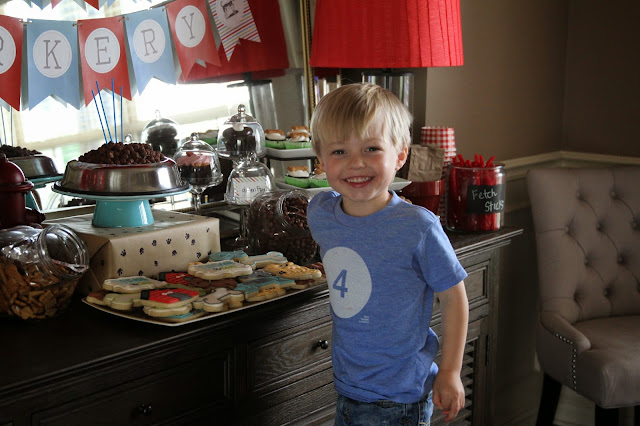