Baseball season has begun and it took us no time at all to make it out to The K for our first game. We decided to miss the crowds for the home opener and take in their first day game, all while celebrating Justin's birthday.

We decided that since we didn't have to splurge for opening day tickets that we would splurge a little for this game. We found tickets that were 4 rows behind the Royals dugout but the only catch, there were three tickets and they couldn't be split up. We went ahead and bought them and later decided we would take Kaden with us. He has preschool on Thursday mornings so Logan would already be at Ms. Brenda's and we wouldn't have to worry about his nap time nor upsetting him. & to make it up to him,  we figured that once Kaden starts kindergarten we would take Logan out to the ballpark and spend a little time with just him. 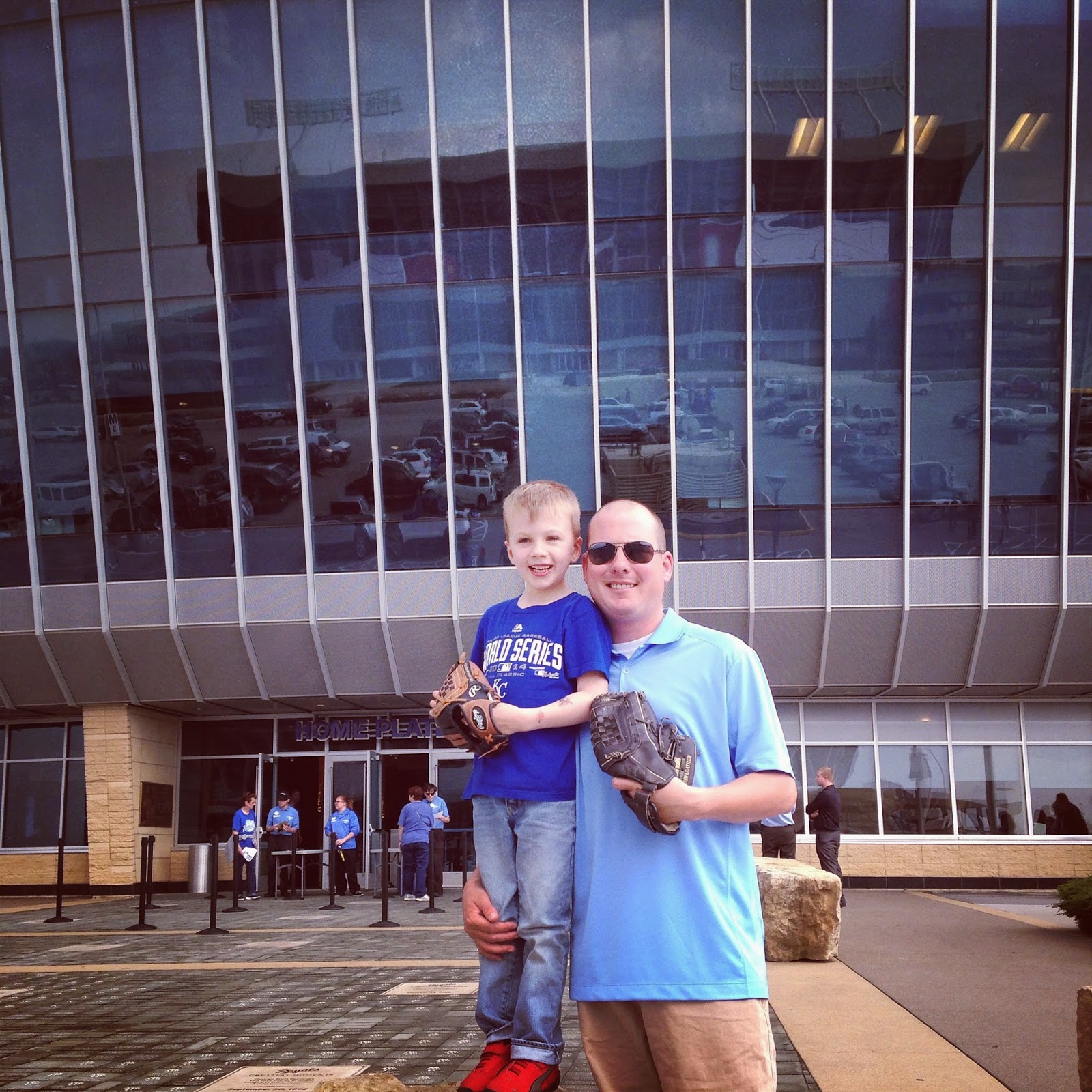 All week long we watched the weather and it wasn't looking all that great but come game time it was beautiful.

We got to the ballpark a little early so that Kaden could go down to the dugout and wave to the players & maybe get an autograph or two... 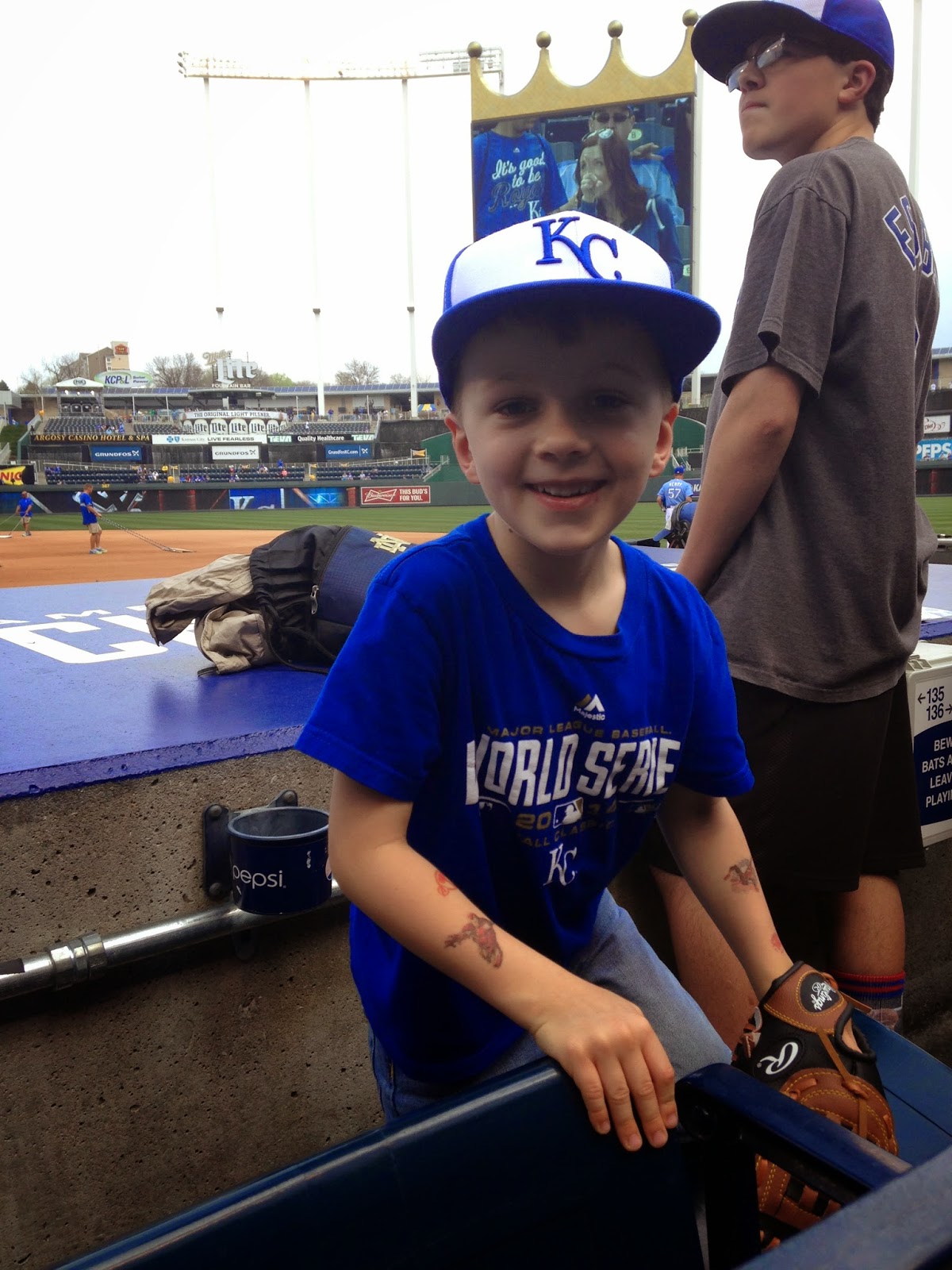 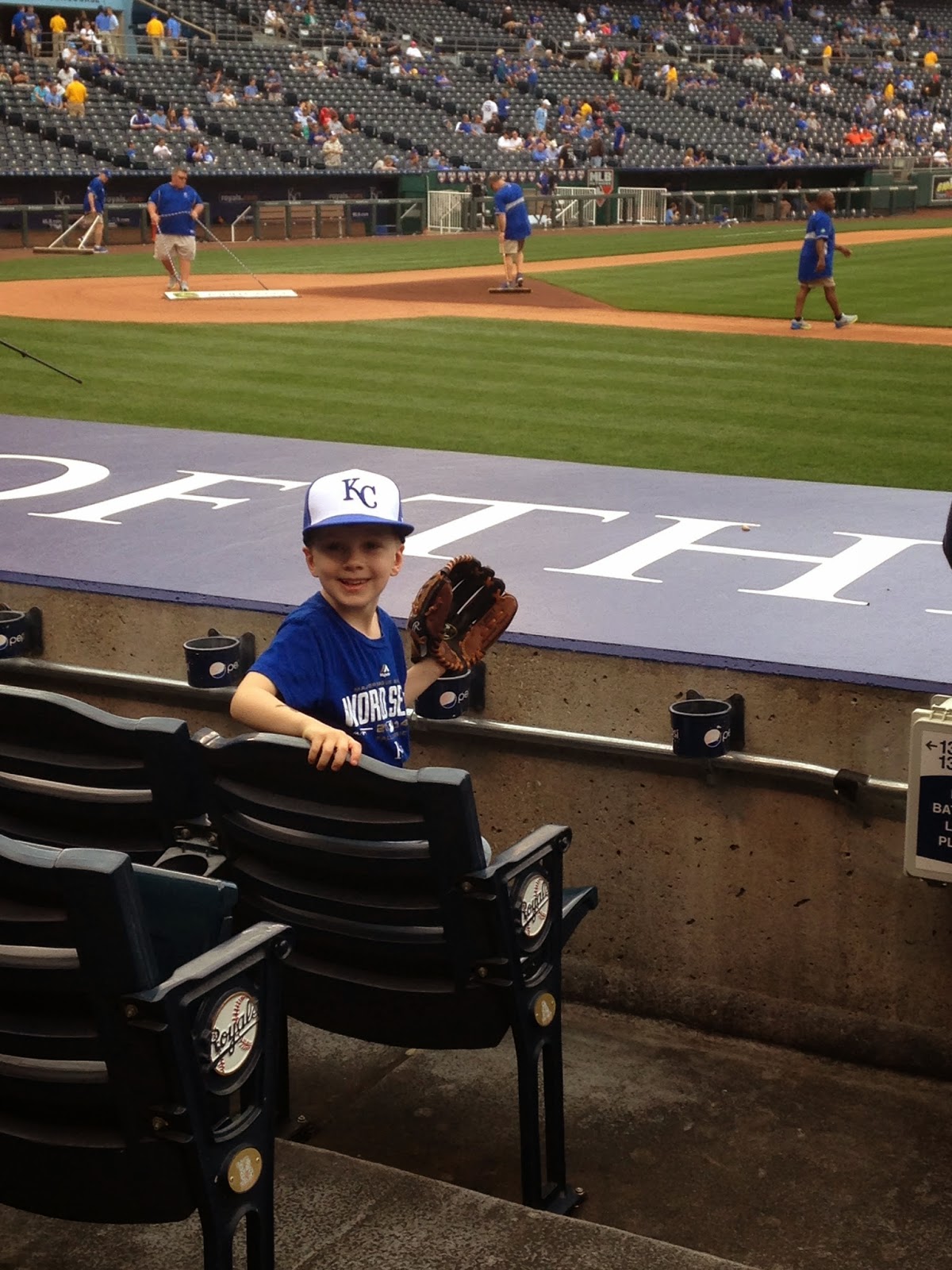 We didn't get an autograph and we spent the next 5 innings running from our seat down to right behind the dugout to see if he could get a game ball as the Royals came off the field & after a few innings where Kaden's heart was broken, he finally got one.

A grounder was hit to Alcides Escobar who cleanly fielded the ball and threw a strike to Hosmer making the third out. As Escobar jogged towards the dugout Hosmer flipped the ball back to him and he took one look at Kaden and tossed it up to him. It hit the top of the dugout and rolled right into his glove. The kid has never smiled more. 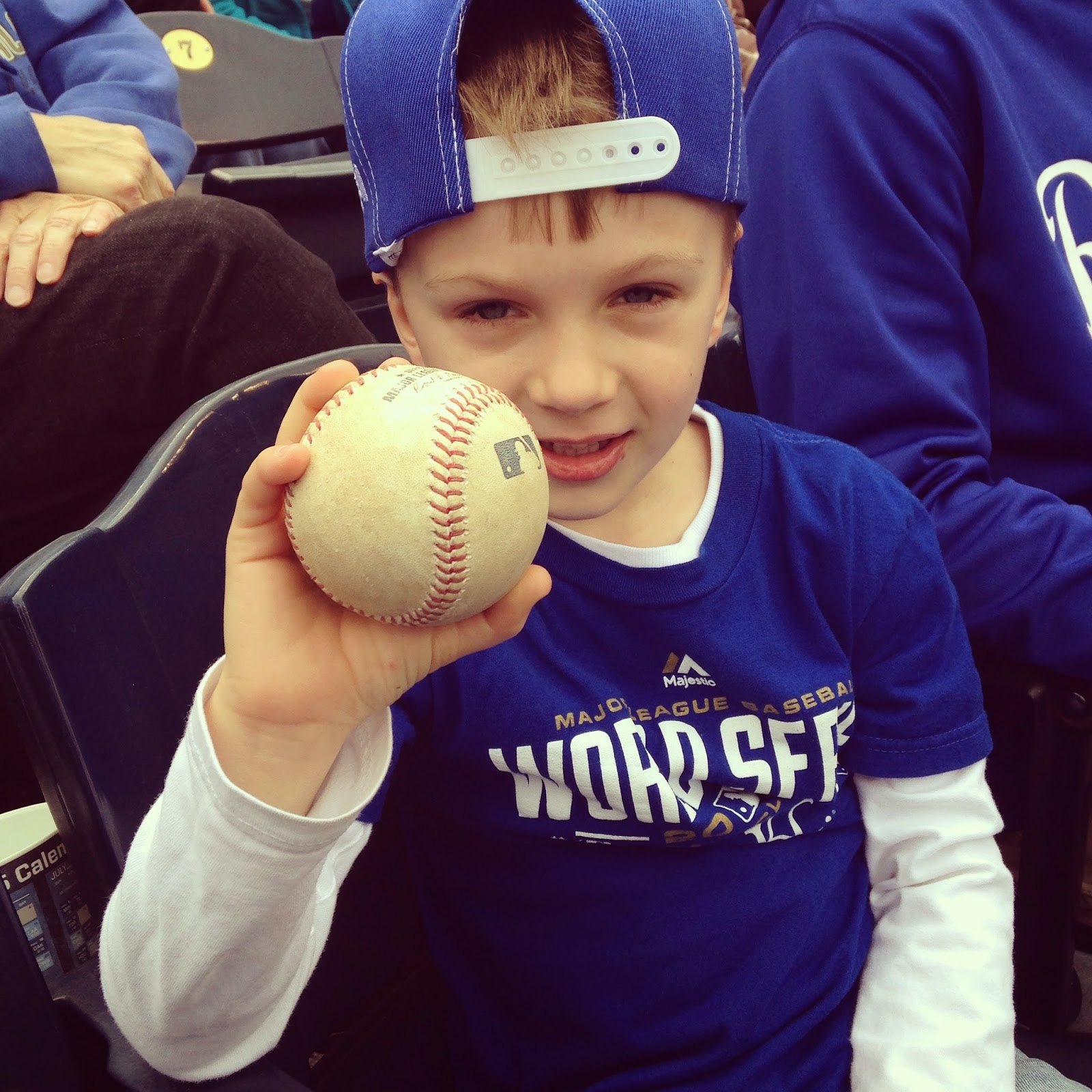 Before "catching" the ball, Kaden was a little squirmy. He wanted cotton candy, he wanted a hot dog, he wanted to go home--yes, home. After getting the ball, he was all about the game. It was like Christmas morning all over again. He was not letting go of that ball. 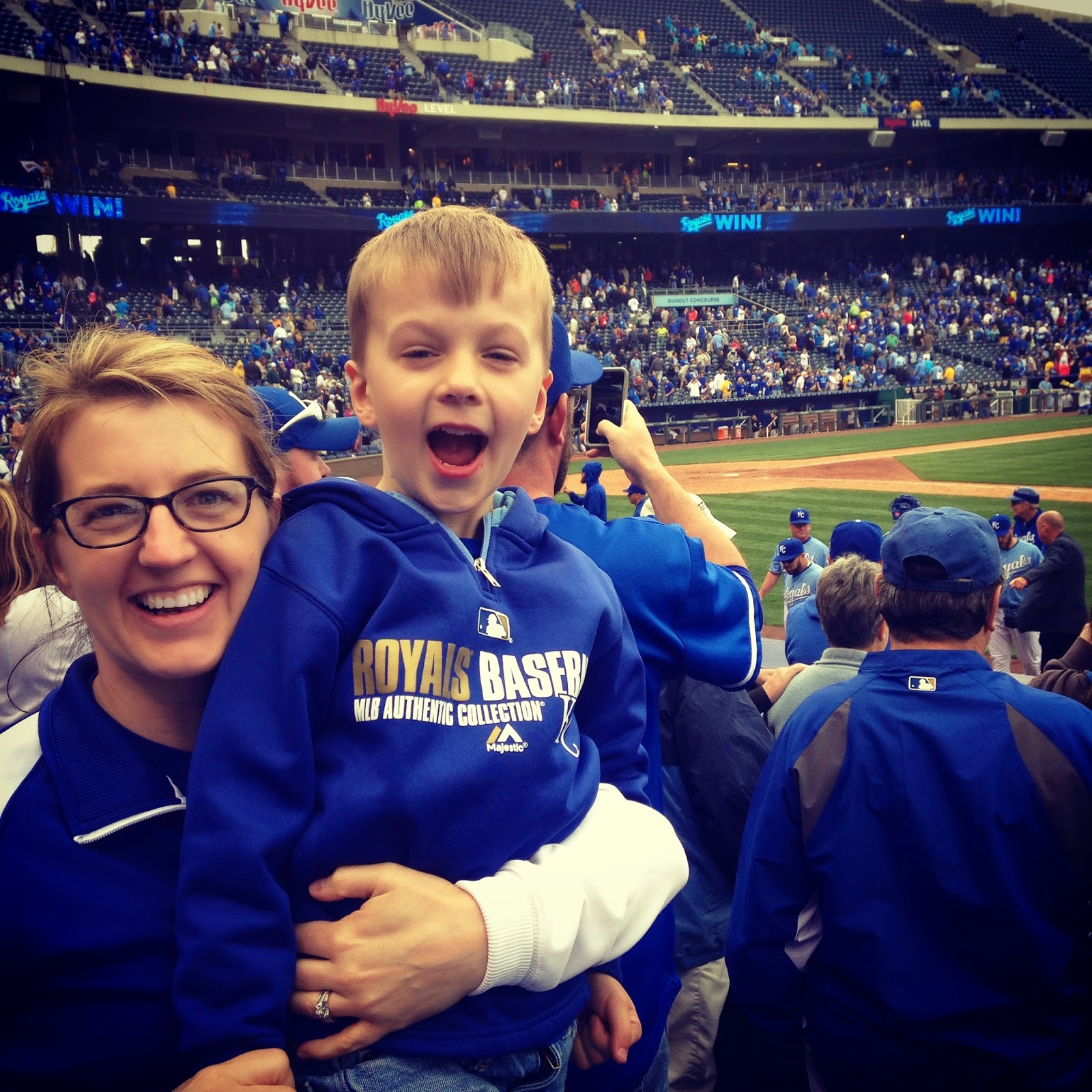 It had been a perfect outing up until that point and the good luck continued. The Royals swept the White Sox and were starting this new season off just like the ended the last season--as the American League Champions. 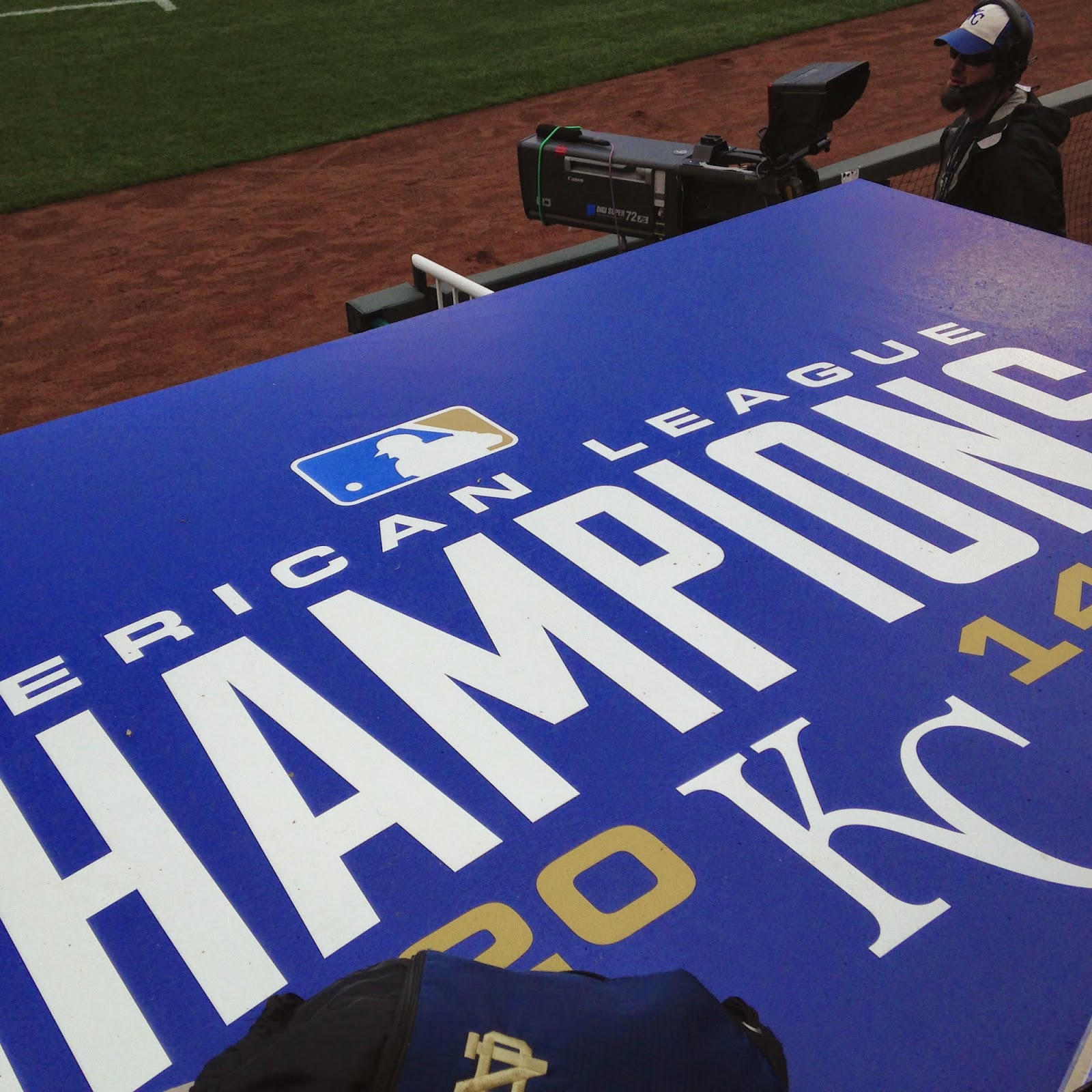 They are such a fun team to watch and I can only hope that they continue to have as much fun playing as they are. Something so special to watch.

& remember that boy, that boy who got that game ball. That boy who wouldn't let go of the ball. He was a little tuckered out by the time we hit the car and made our way to Brenda's to pick of his little brother but through it all, he never let go of his ball. 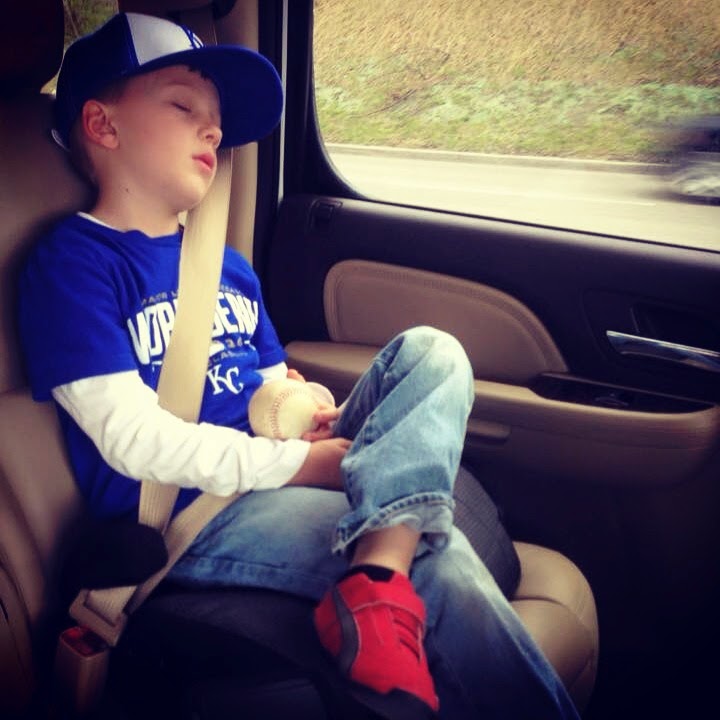