At Kaden's 5 year old check up they suggested that we go and see an optometrist, it wasn't as though he failed his eye exam but there were certainly some questionable answers that were given. Our doctor that day just figured Kaden wasn't in the mood to answer the Can you read me line 3 questions but to be on the safe side gave me a referral. I took it and when I looked at it I noticed a familiar name--was pretty sure that I had her and her family in front of my camera before so I reached out and told her my concerns. Since Kaden wasn't covered by vision yet she saw no issues with waiting until the first of the year. So we did & we got it in just before my crazy travel schedule kicks into high gear.

Kaden was a little hesitant to go today and was really quiet on the ride to the office and when I asked him what was up, he told me I don't want any shots Mom. I assured him that he would not be getting any shots and that this was not that type of doctor and that Mommy's friend would be the one we would get to see. He seemed to perk up a little more after that.

We got called right back & Kaden took a seat in the big chair. His eyes were filled with curiosity as there were lots of new gadgets surrounding him. The first person we met administered the pre-test and brought out some tape to cover one of his eyes. As he worked through the letters and pictures I got more and more worried---he didn't seem to hardly get any right and I noticed that he was guessing a lot. She did a few more test with him, put on some really cool glasses and had him look at a light and then some other glasses and tap certain pictures and he seemed to breeze through those. But who am I kidding, I'm no doctor and could have been completely wrong with my assessment. And as much as I wanted to help him and give him the answers or at least clues, I didn't. I sat there quietly as he did the tests. 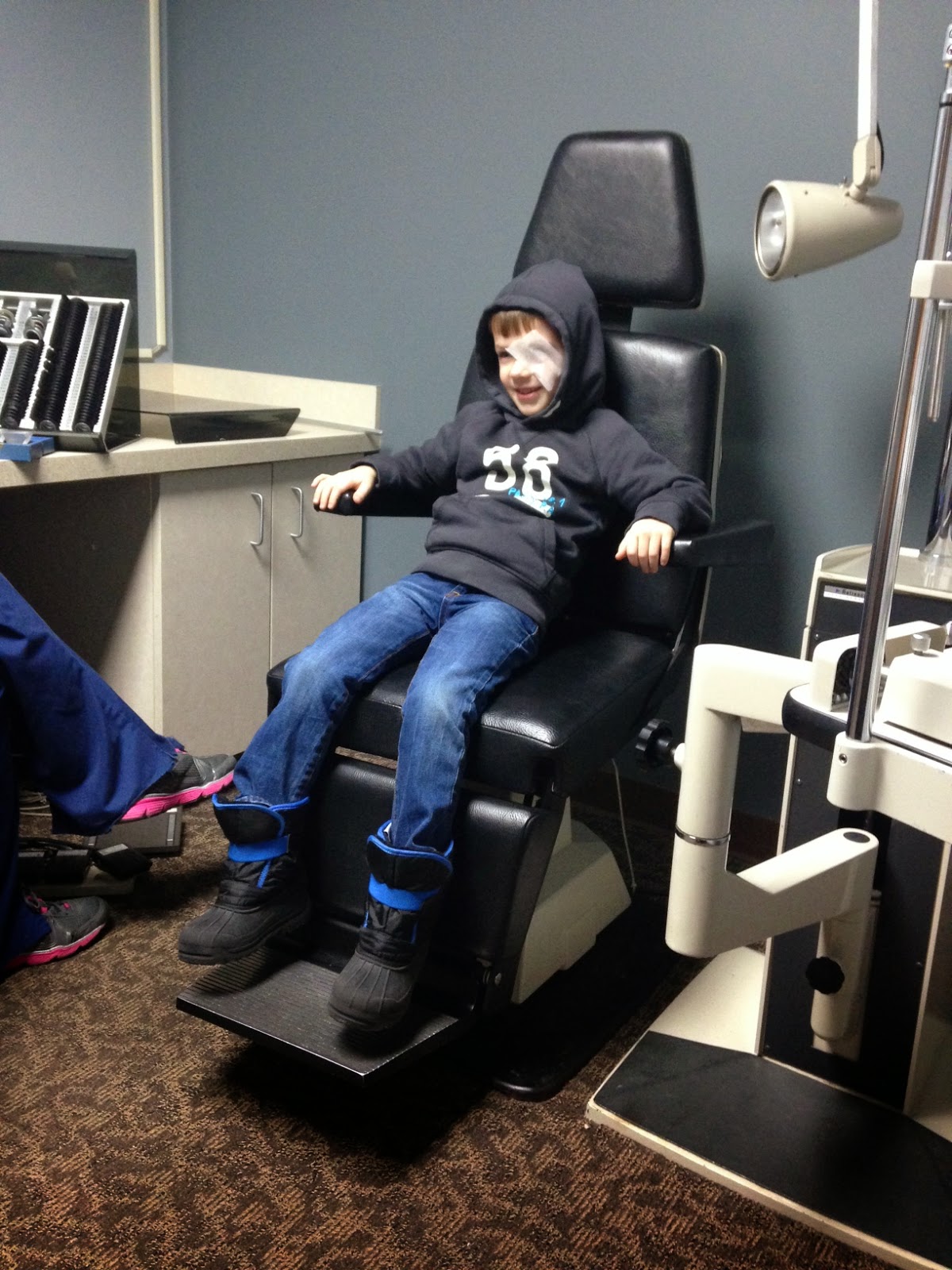 Finally, our friend came through the door and I introduced Kaden to her. He was instantly at ease and ready for more tests. She assured me that even if he didn't speak a word, they would still be able to complete the test & tell if anything was wrong or if corrected lenses were needed. She tested a few of the same things using the eye chart but instead of multiple letters on the screen in front of him, she only put one letter at a time on the screen so he couldn't get confused as to what order. He seemed to do better with this approach, or that is what I was at least thinking.

Then she brought out the big guns. 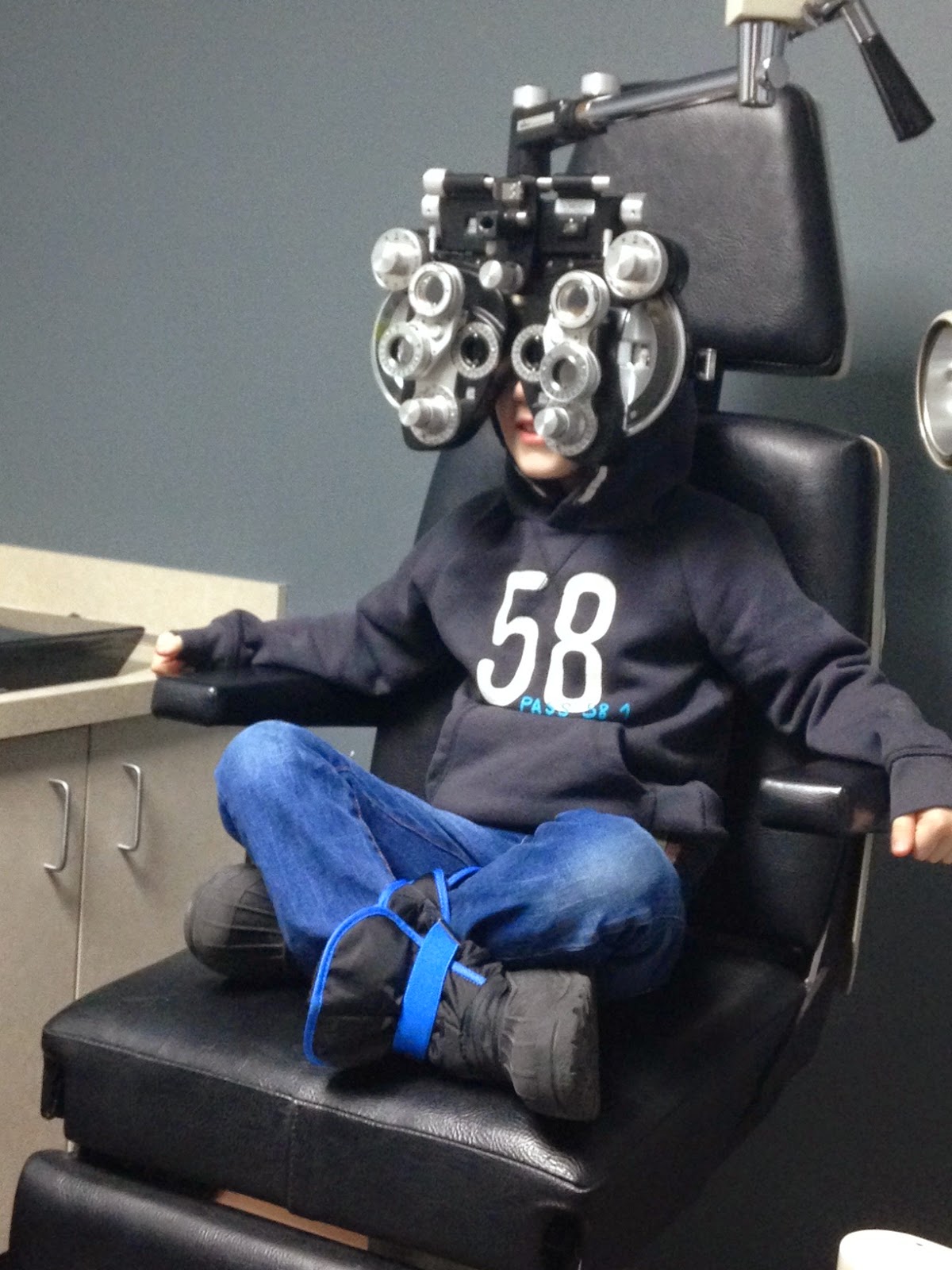 Kaden was more than eager to look through this really cool pair of glasses and to watch Ice Age as she looked at his eyes.

She pulled out another contraption and he once again followed each of her instructions. 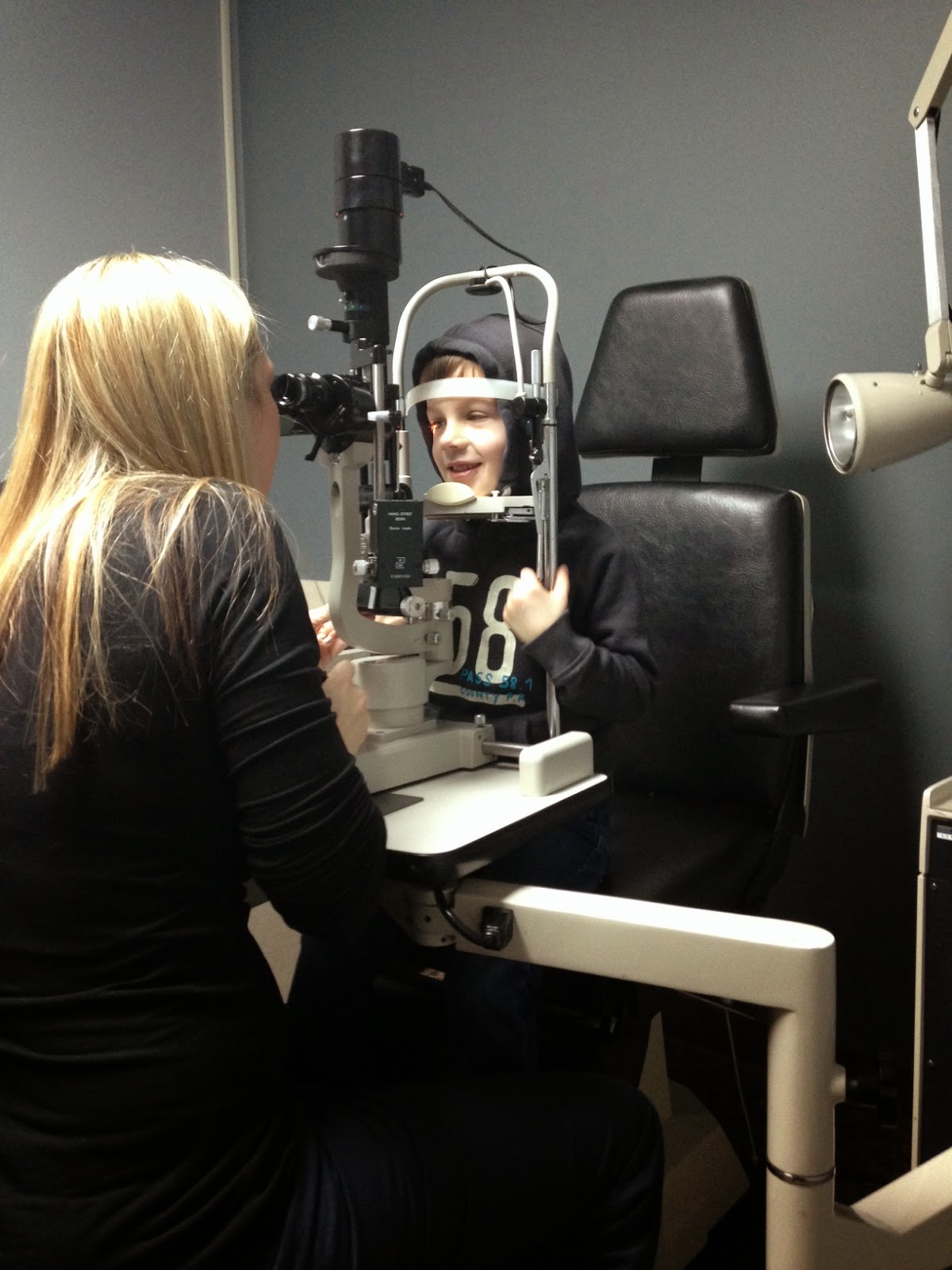 After this part of the exam she explained to me that his eyes looked good and that although he looks to have a touch of farsightedness, she doesn't think it is anything he won't outgrow and that it is totally normal for his age. She also mentioned that there was a slight astigmatism but that again, nothing to be alarmed of and he would again, probably grow out of it. She did want to dilate his eyes so she could have another look and kind of look behind his eyes at the backside, gross, but okay.

He wasn't too keen on getting the drops put in and so when we had to do the left eye a second time, I asked if I could do it. They had no issue with that and in 5 minutes both eyes were dilated and he was back on the chair.

In the end, she came to the same conclusion. His eyes looked very healthy and she said she didn't have many concerns. That we can watch out for him showing signs of fatigue when doing close up work but outside of that, see you next year.

& she was going to write a letter to our pediatrician to let them know that we did in fact have an eye exam and things checked out fine. I don't think I would have even thought twice about his eyesight at 5 years old had the pediatrician not done what they did and although it seems like the eye appointment wasn't quite necessary, I'm glad we went. One more thing that we can check off and not have to worry about when he enters Kindergarten--should have NO trouble seeing the board! 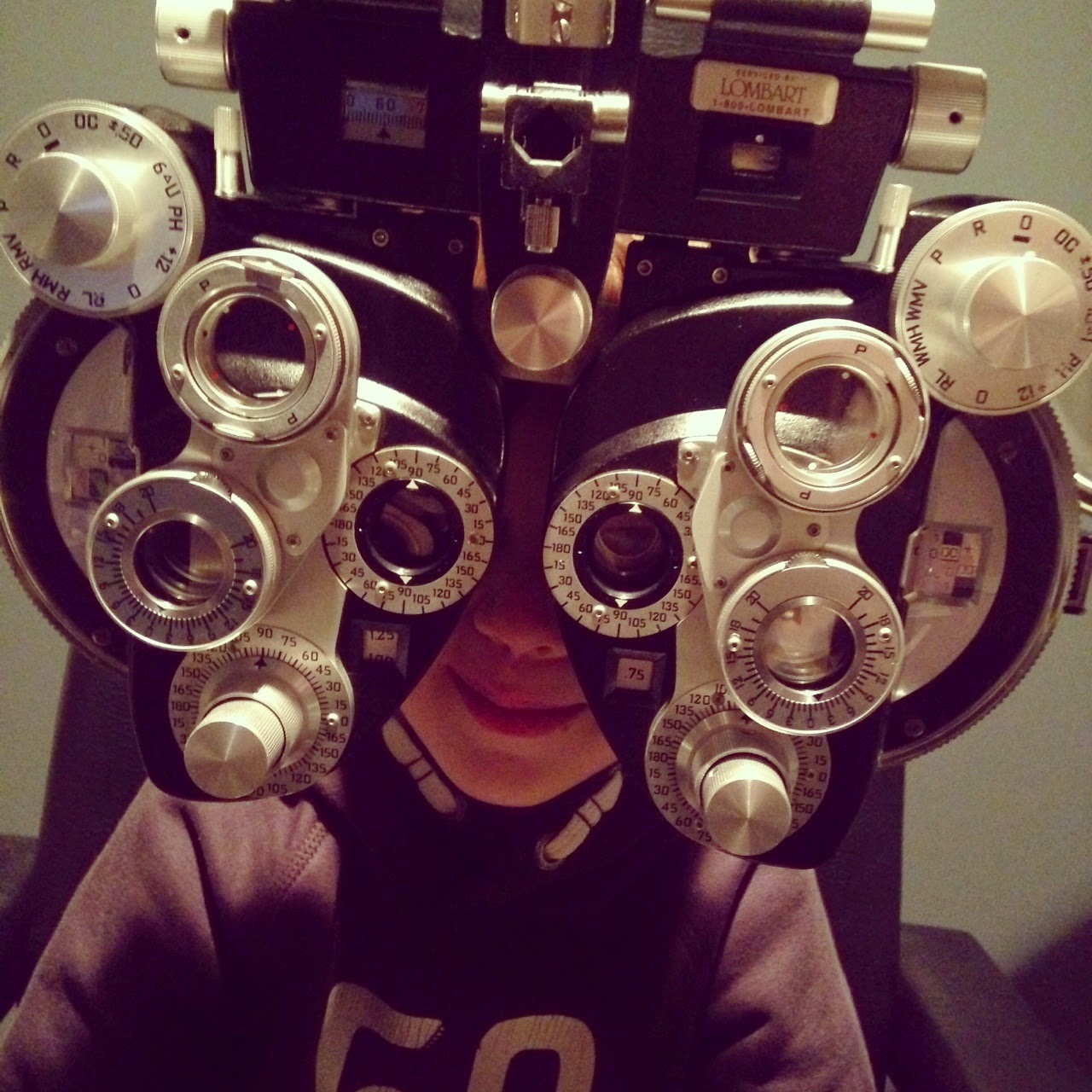