About a month ago I came home one weekend, my first weekend with NO photo shoots, and decided to paint the laundry room. I had wanted it painted for a long time but just never got around to it & on a whim I went for it. My goal was to brighten it up--if I was going to be doing laundry I at least wanted to be smiling while I was doing it. & brightening it up is exactly what happened, it has been a very welcomed change.

But I wasn't done with just paint. I added a few pictures of the boys in both black and white and in color---the picture you will see below with Kaden as Superman in front of the Union Pacific train is one of my all time favorite images that Katy has taken for us & I finally found the perfect place for it. The colors work just marvelous together.

And even after the pictures were hung we still had a lot of wall to work with so I did want anyone in this day and age would do, consulted Pinterest & ran across this idea. 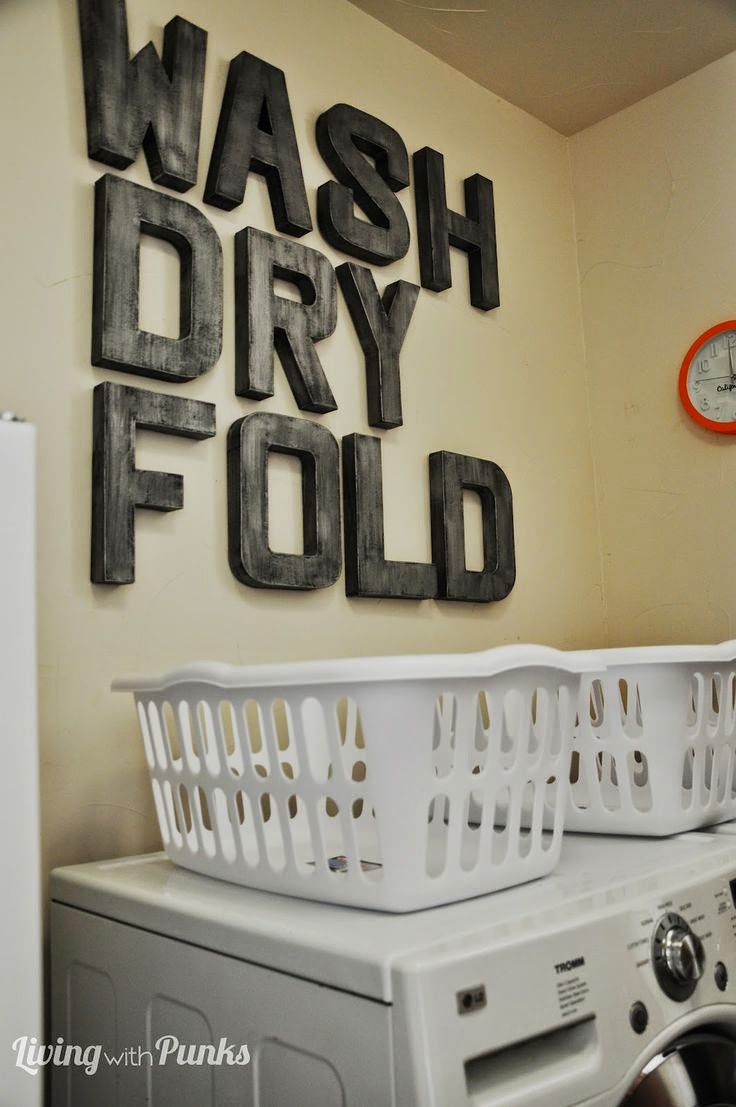 I loved the idea of some "metal" in the room and it was actually perfect for the space we had so I went on the hunt for letters and I remembered that this time last year I purchased a few through Anthropology so that was my first stop. They, of course, had the letters I needed but I was going to have to pay for them, 18 bucks a pop which puts me at $198 without tax--and all for a few letters. There had to be another option & with that I went straight back to Pinterest.

I was right, there were tons of DIY Anthropology knockoff letters, just had to pick which tutorial was for me. I kept it easy--one can of spray paint easy.

I picked up the letters at Hobby Lobby which were each 50% off. They are your basic cardboard letters, nothing special and best of all, super lightweight making hanging that much easier. 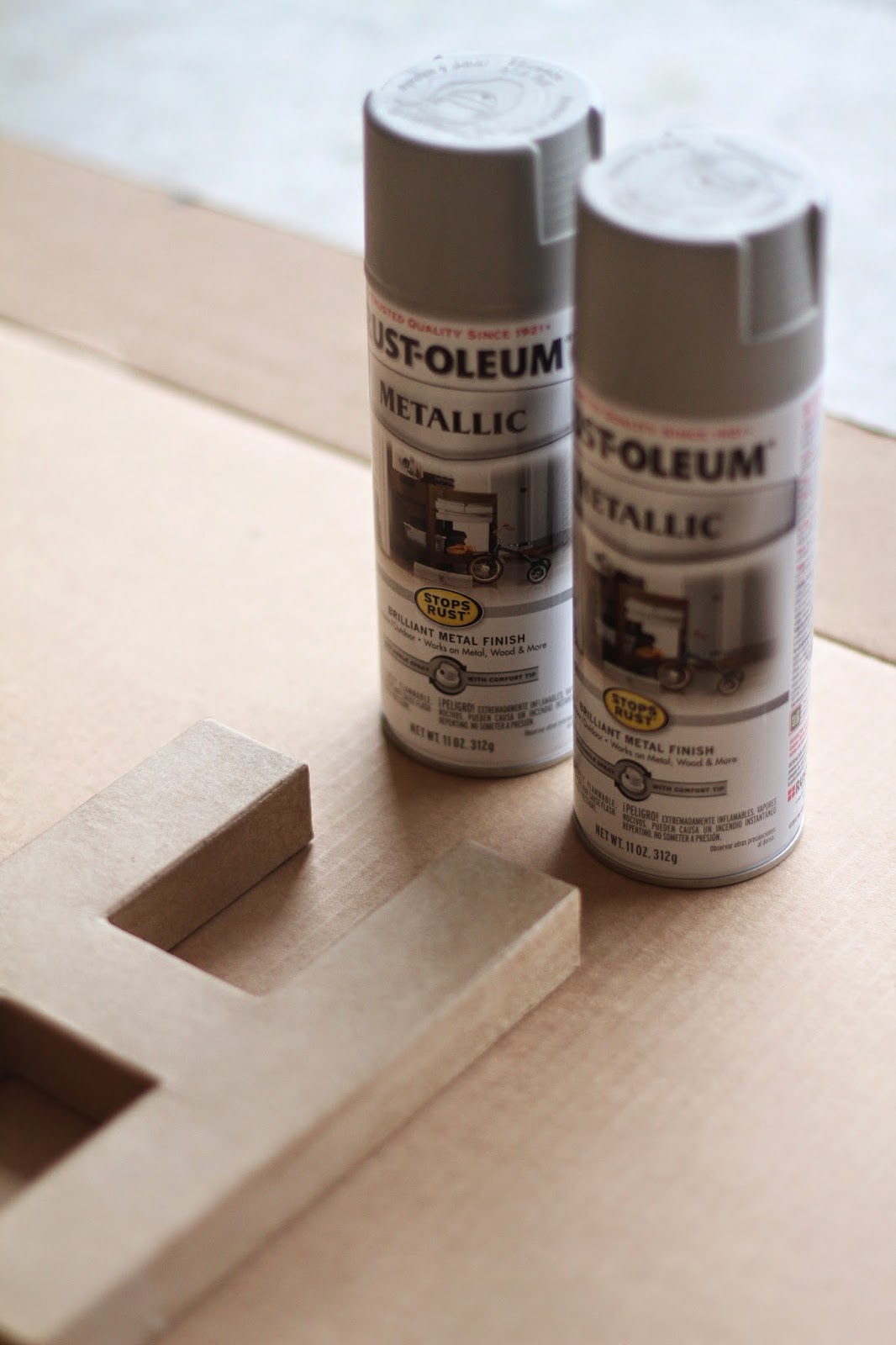 I purchased 4 cans of Rust-oleum Silver Metallic spray paint and one spray nozzle, although, I ended up only using about 2.5 cans. The letters were $1.50 each after their discount & the spray paint was $5.97 a can making my grand total (before tax) $31.24. Saving me about $167 in total.

This project, in total, probably took an hour--40 minutes of spray painting and then about 20 minutes to hang the letters on the wall. I did it over a longer period of time but seriously, probably the easiest project I have completed to date. 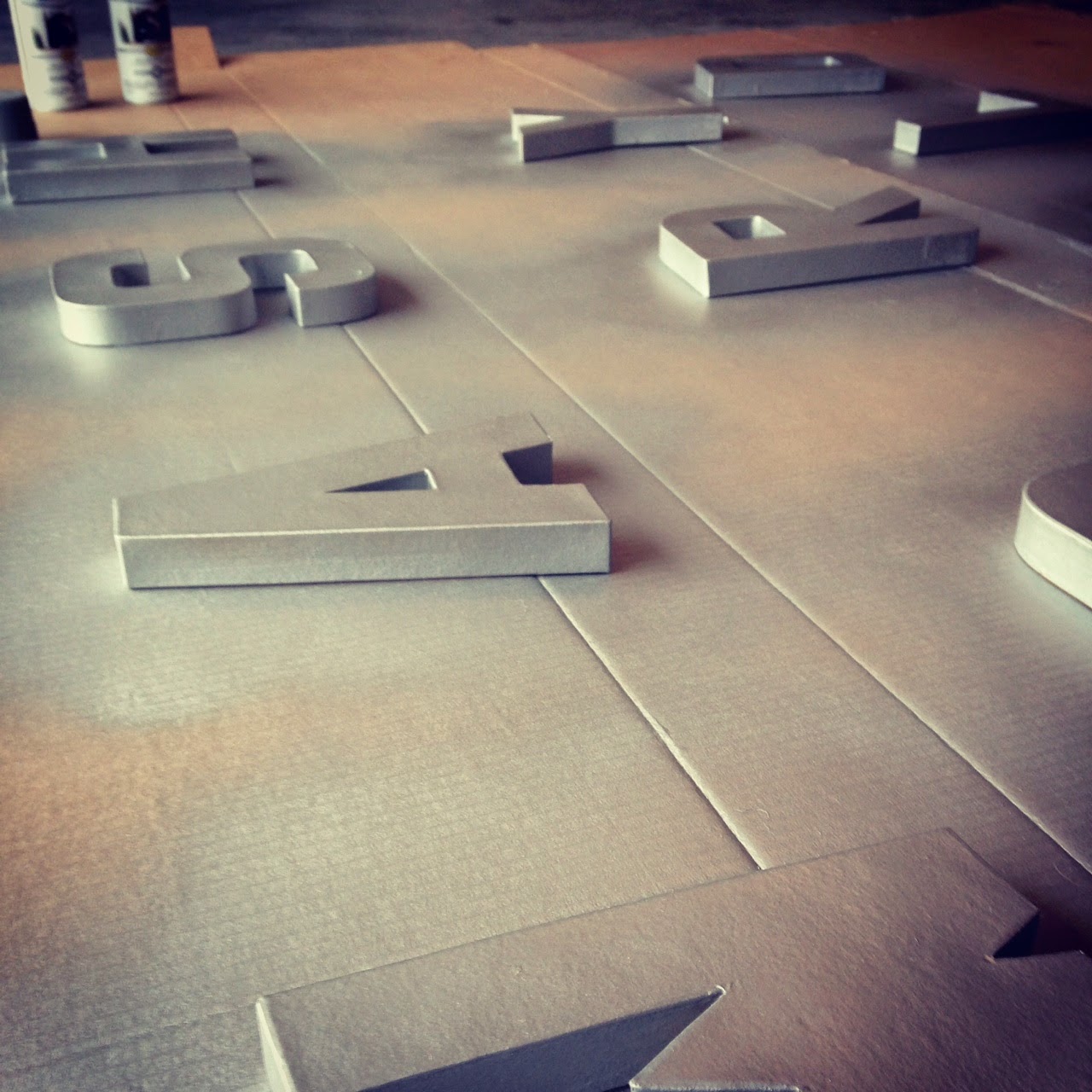 I only sprayed the sides that you can see here in the pictures, basically leaving only the back side untouched. On the first round I lightly sprayed all sides but wanted to make sure that I got in all the hard to reach places from the get go so that when I went around again I could focus more on the texture and not worry if everything was covered or not. The second and third coats were very similar in the fact that I just tried to evenly cover each letter with a good solid coat. The fourth and fifth coats were a little uneven which was totally intentional--I wanted the letters to look a little worn, rugged and well, uneven. 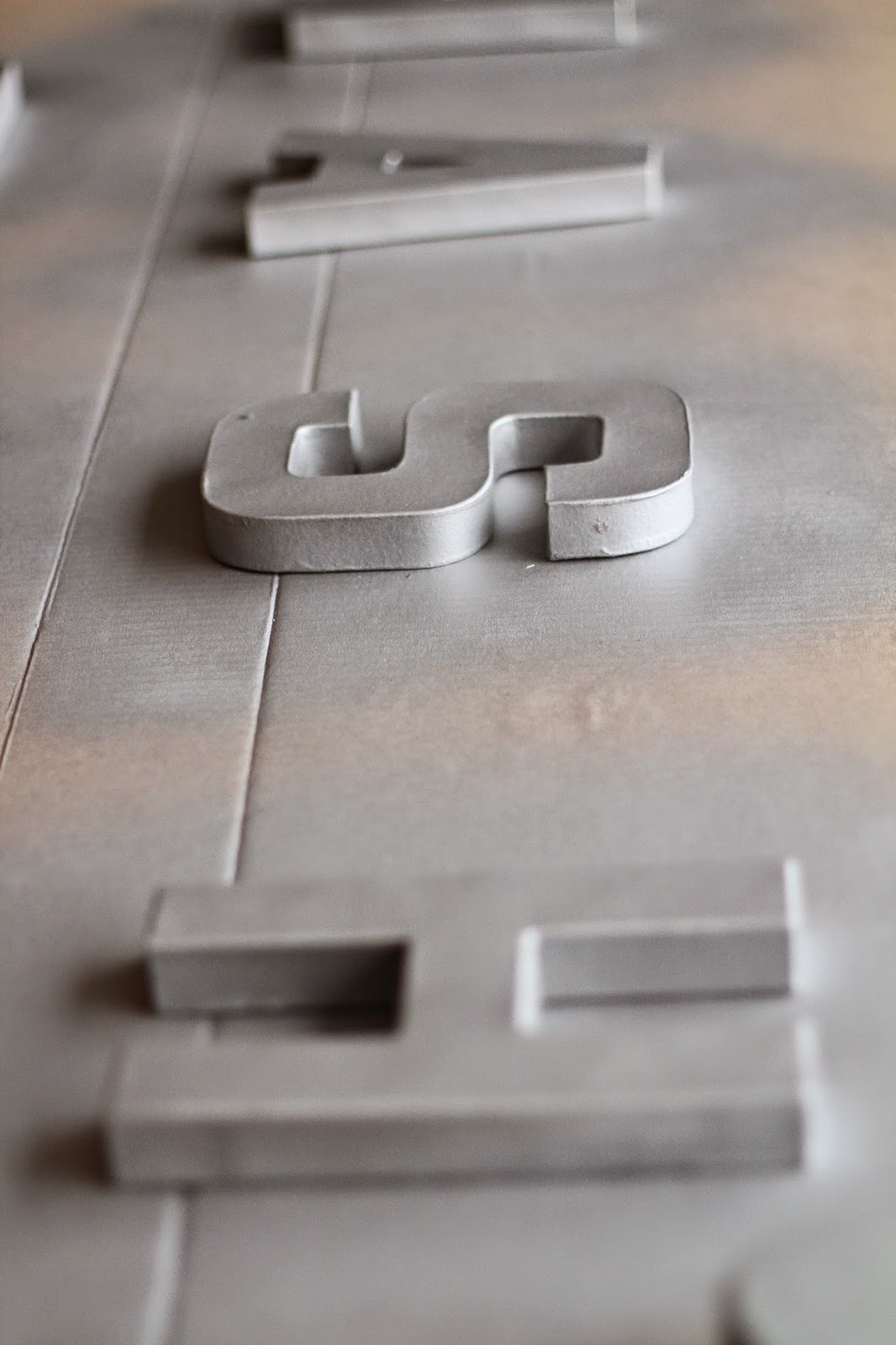 After having applied the fifth coat I allowed them to dry for about a day, they didn't need that long but I wasn't feeling finishing the project on Monday night so there they sat. After dinner I turned on Home Alone 2 for the boys and I grabbed my favorite tape, a level & a few 3M Command Strips and got to work… 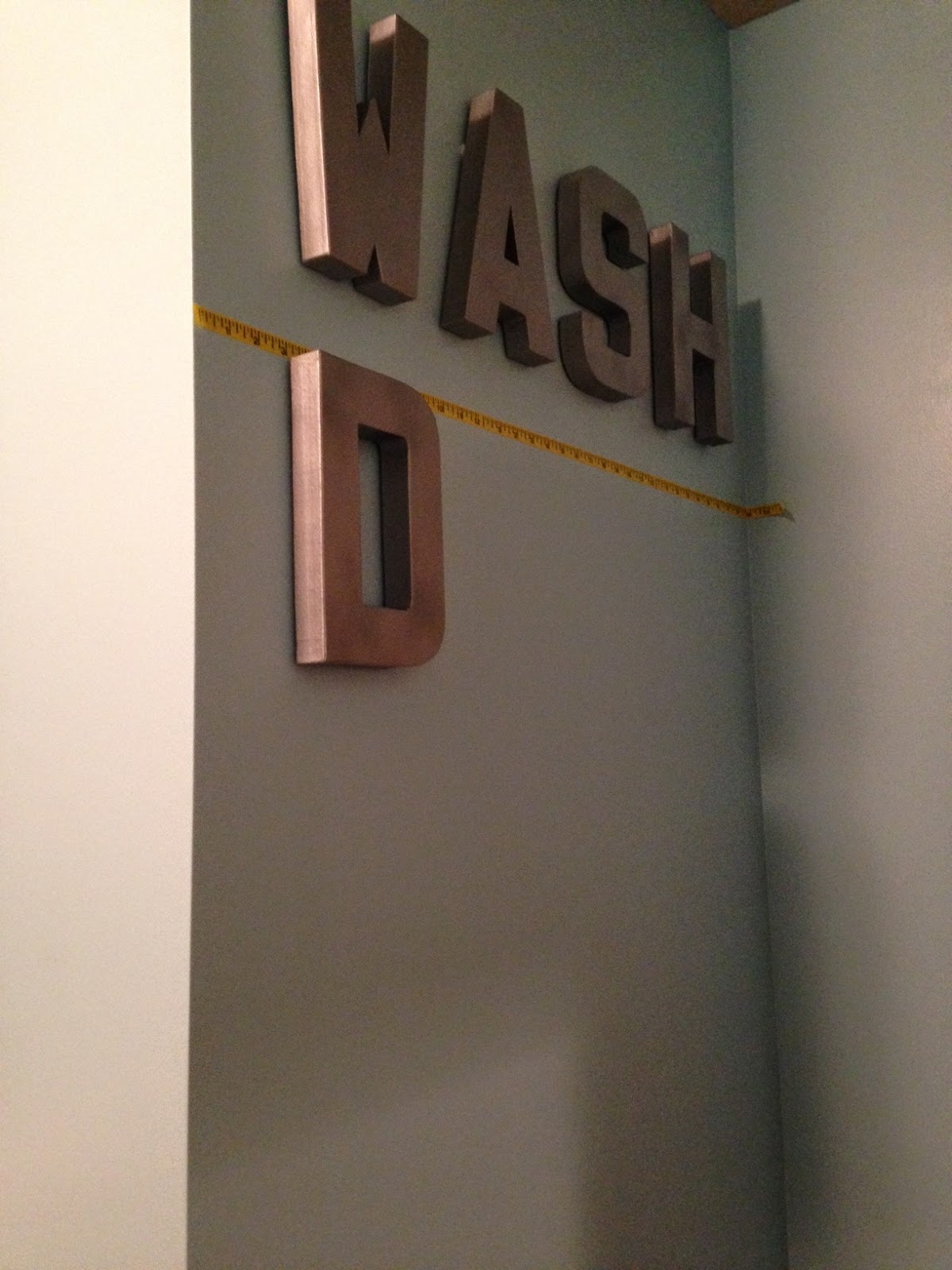 & literally 20 minutes later they were hung & the laundry room was a little closer to being complete. Is it bad that the only room in our house that is almost 100% done is the laundry room, a room no one else will ever see?!? Oh well, gotta start some place. 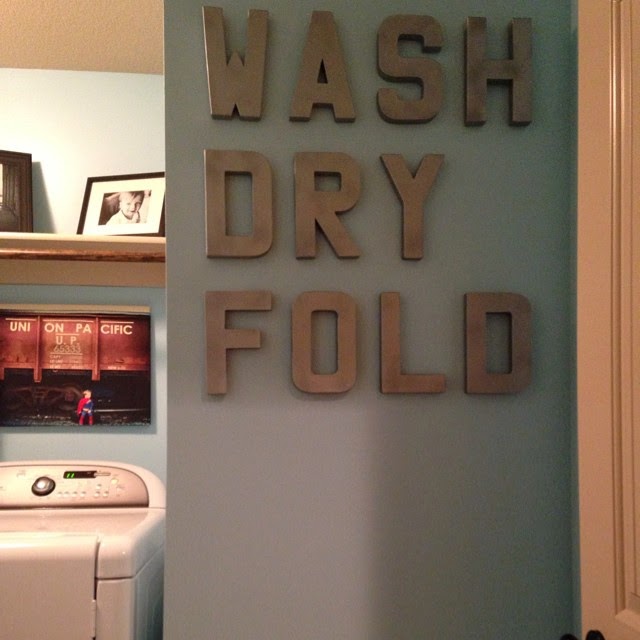