To the North Pole.

In keeping with tradition we met the Berberich family out for dinner at Freddy's & then we all headed down the street to Bass Pro Shop or if you are 3.5 & 5 & named Logan and Kaden, then you would 100% believe we were at the North Pole---because that's where Santa is after all. We had told the boys earlier in the week that come Friday we would go and visit Santa and they could tell him what they wanted and almost immediately Logan shouted out, to the North Pole? Is that far, Mommy? Kaden quickly jumped in and assured him that it wasn't far & that they would get to see reindeer too and they both knew that in order to go on Friday, they needed to have a good week. You can't go and see Santa if you are on the Naughty list & they are fearful of being on the Naughty list.

All week long they had their own mini-countdown.

Logan: "What day is today?"

Kaden: "It's Tuesday bud and do you know what that means?"

To say they were excited was an understatement but they still had a whole week to get through with good behavior…the odds were not in their favor. When pickup on Friday at 5 came I walked in and when I asked about their day they both said, "It was okay." This was code for a not-so-good-day & Ms. Brenda was backing that up by shaking her head. We had to have a conversation in the car about being nice, being safe, yada yada & when it came down to it, I couldn't take Santa away. I mean 4 out of 5 days was pretty good--I know my day wasn't the greatest and I often have bad days so I was going to let this one slide---as in they could still see Santa if their behavior improved.

Last year we hit Freddy's up at the wrong time, it was packed. I think it had just recently opened and it was a school fundraiser night. We had 8 of us and finding a table was difficult but we pulled it off. This year, quite the opposite. The place was quiet, the table was free, the service was quick, food was good and the milk shake was delicious. Part one of the evening went smoothly.

We arrived at "the North Pole" around 6:46 and the parking lot was full. This wasn't looking good. I went straight in and got our time pass--8:00 but suggested that we start lining up around 7:40. We had some time to kill.

We visited the fish. 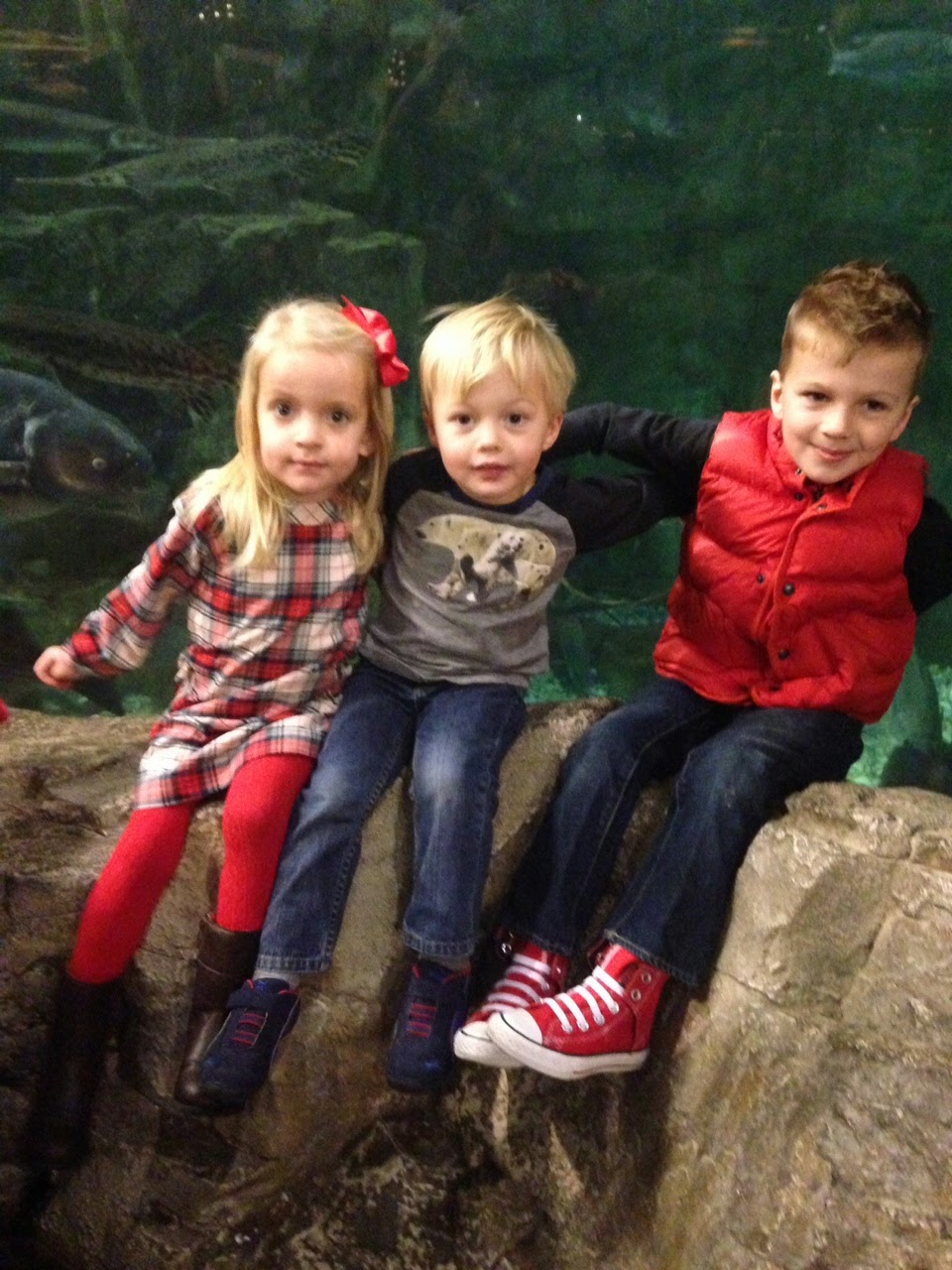 We tried out every, and I mean every ATV. 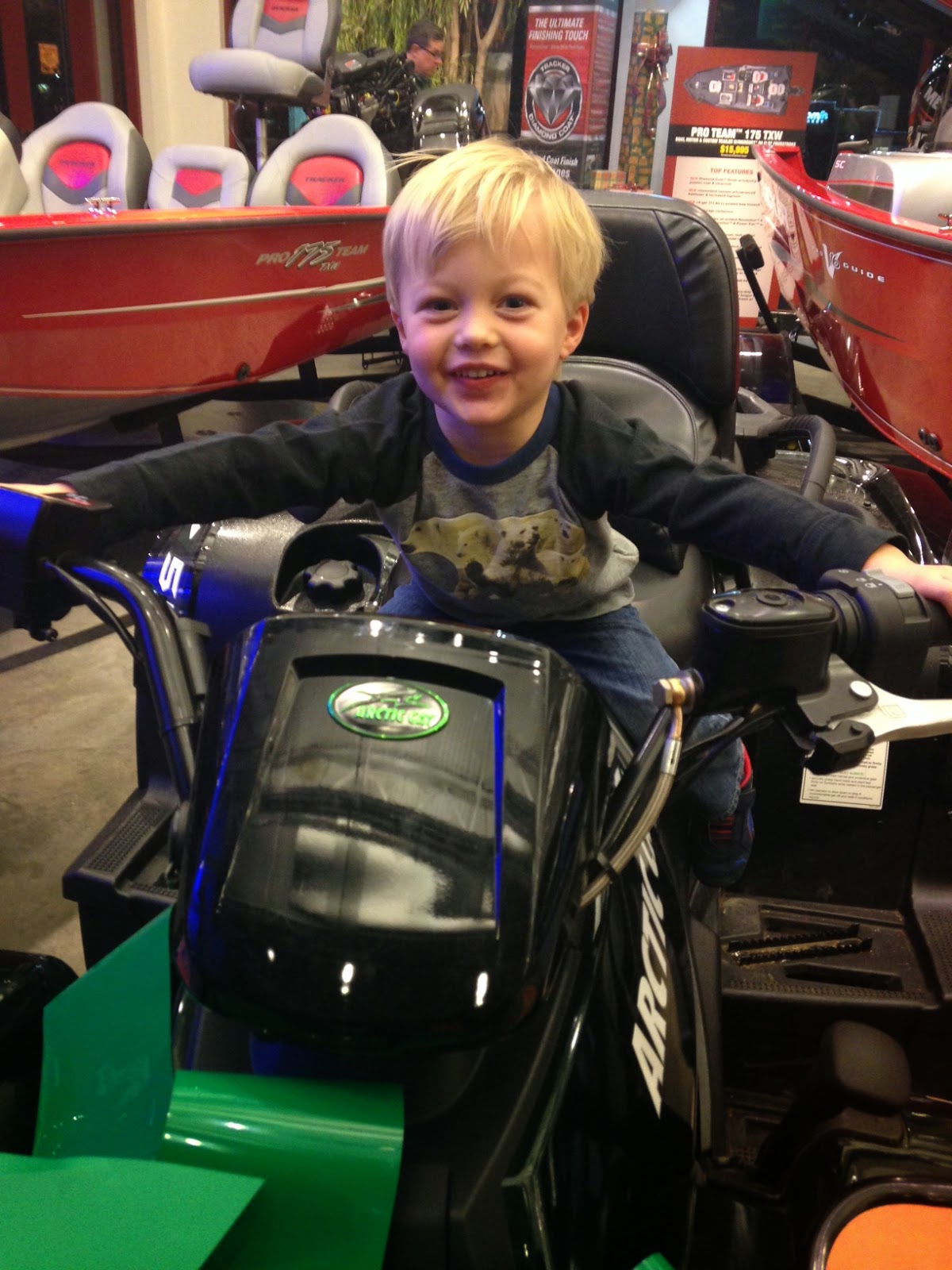 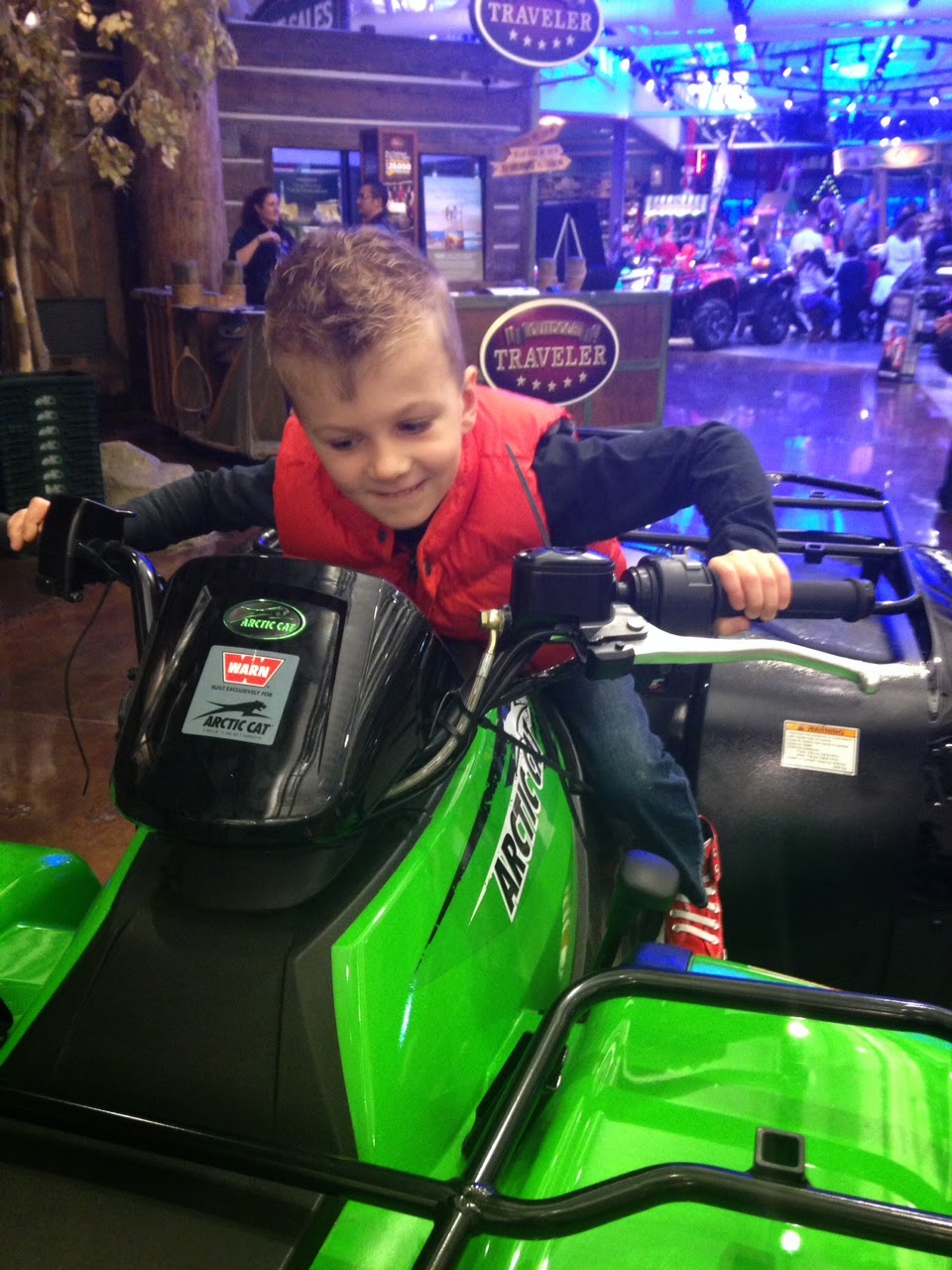 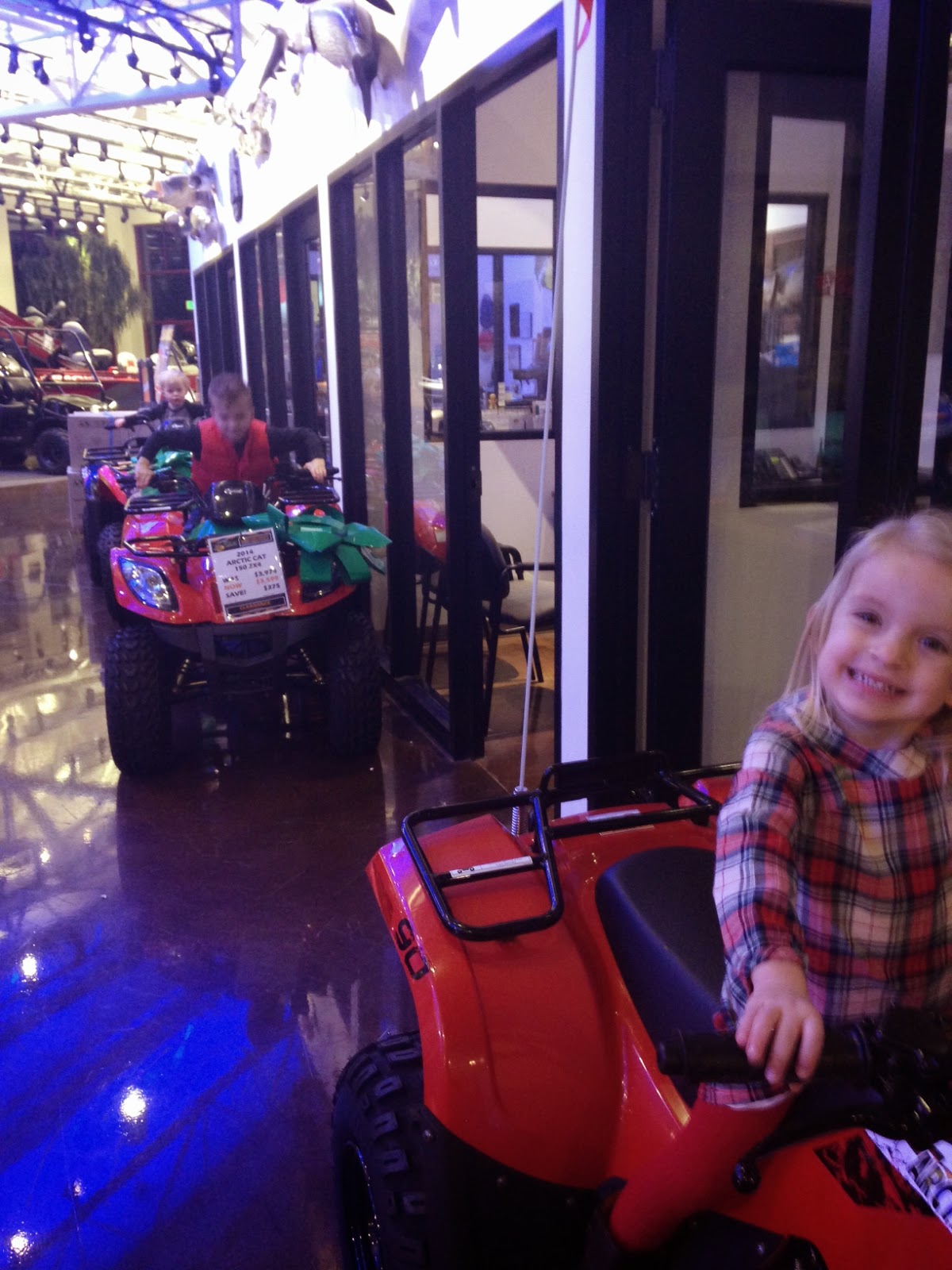 We rode the carousel. 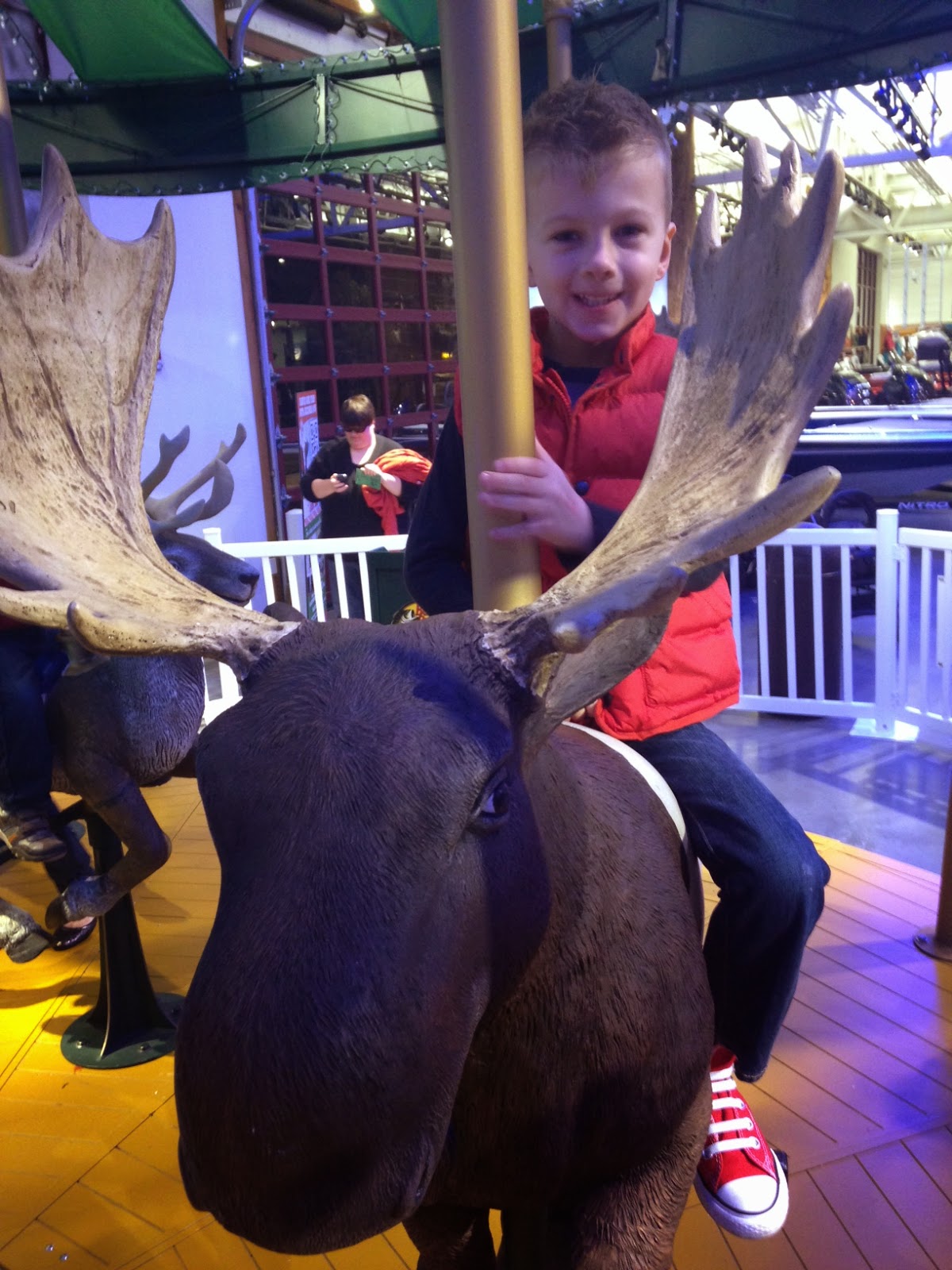 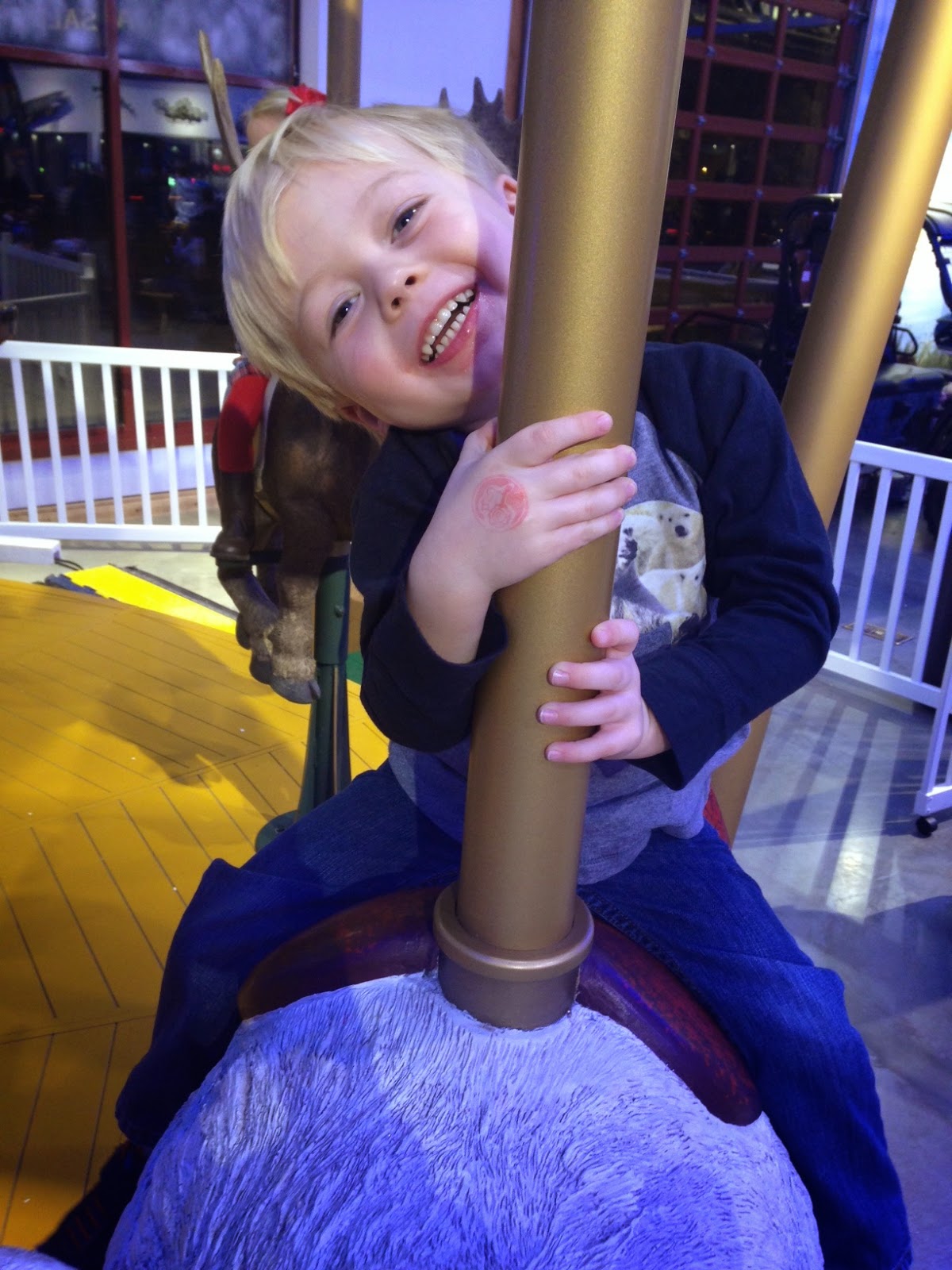 & then finally it was time to start lining up. We lucked out when we chose to line up a few minutes early and ended up getting at the front of the line for 8 o'clockers. We took turns manning the line as the kids colored, raced cars on the race car track, drove trains & a big monster truck.

Finally, after about 20 minutes in line we were ready to see Santa. Logan proclaimed he wasn't going to cry & Kaden was anxious to tell Santa what he wanted. When it was our turn the boys went first, we were fearful Lilly wouldn't like Santa and it might scare Logan into not going up…they both walked right up and sat down on his lap and smiled. Kind of uneventful actually which in this case is totally fine by me. They each took turns telling Santa what they wanted…

Logan: "I would like a truck with lots of colors." 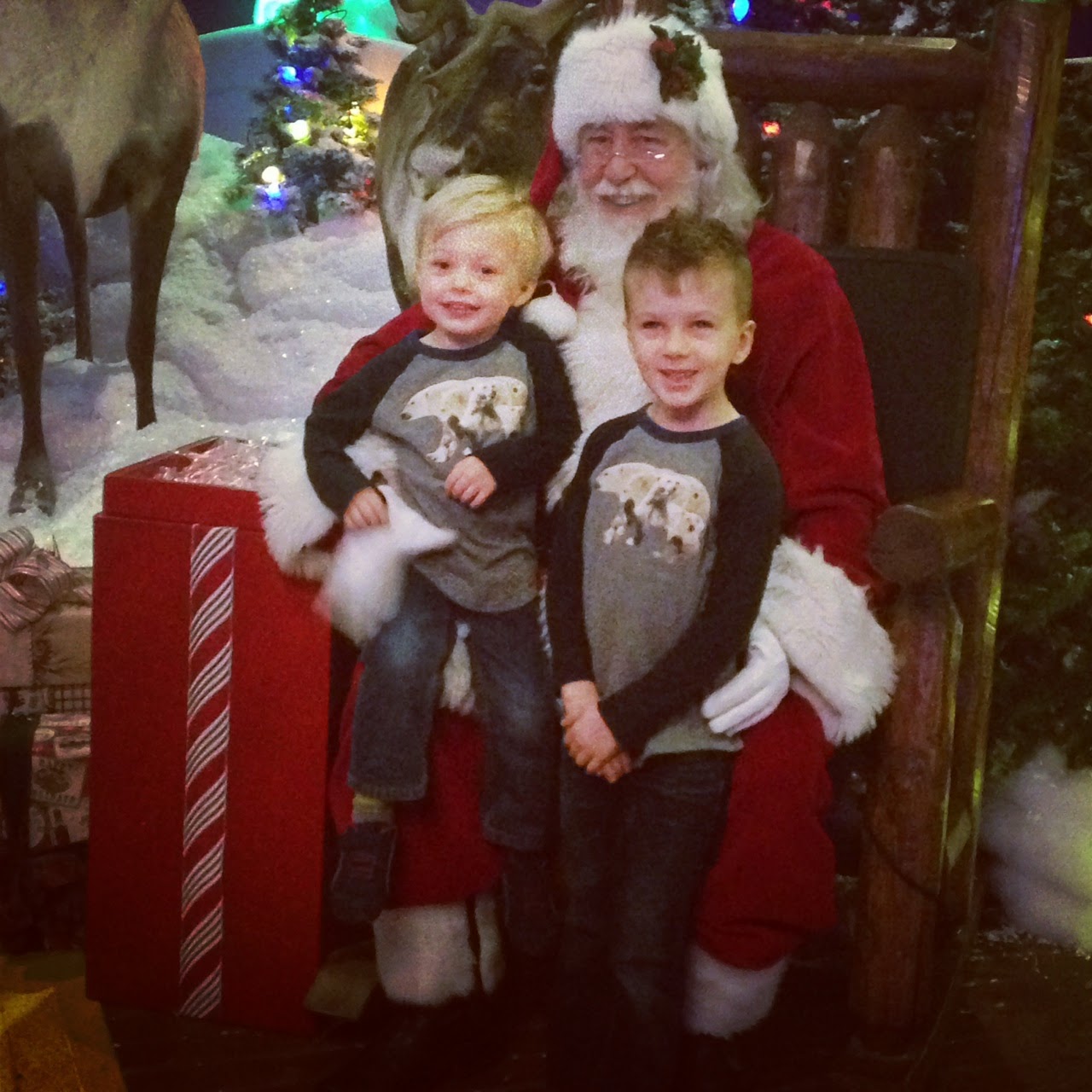 Now a couple things. One, for the last 2 weeks Kaden has been talking about a 3DS, I didn't even know he knew what it was but Tyler, Ms. Brenda's grandson, has one and he's seen him playing it. So he has recently started talking about wanting one. Two, Santa isn't bringing a 3DS. Santa already bought said Santa gift and there isn't a 3 or a D or an S in the name. I have been doing my best to try and steer Kaden in the direction of what he will be getting so that come Christmas Morning he isn't royally scarred. I guess time will only tell…

Now what the heck is a "truck with lots of colors." Its safe to say that this request wasn't received by Santa either.

I love that our boys just had one little wish and it crushes my heart that these little wishes came after I had done all my shopping because I feel horrible that they may be disappointed but they're genuinely sweet, kind-hearted boys that I am sure will be happy when they see what Santa brought for them and the other 3 presents they have under the tree.

In the end our "North Pole" visit was pretty much a complete success. Although Lilly wasn't too excited about having Santa hold her, her dad seemed to make up for it! 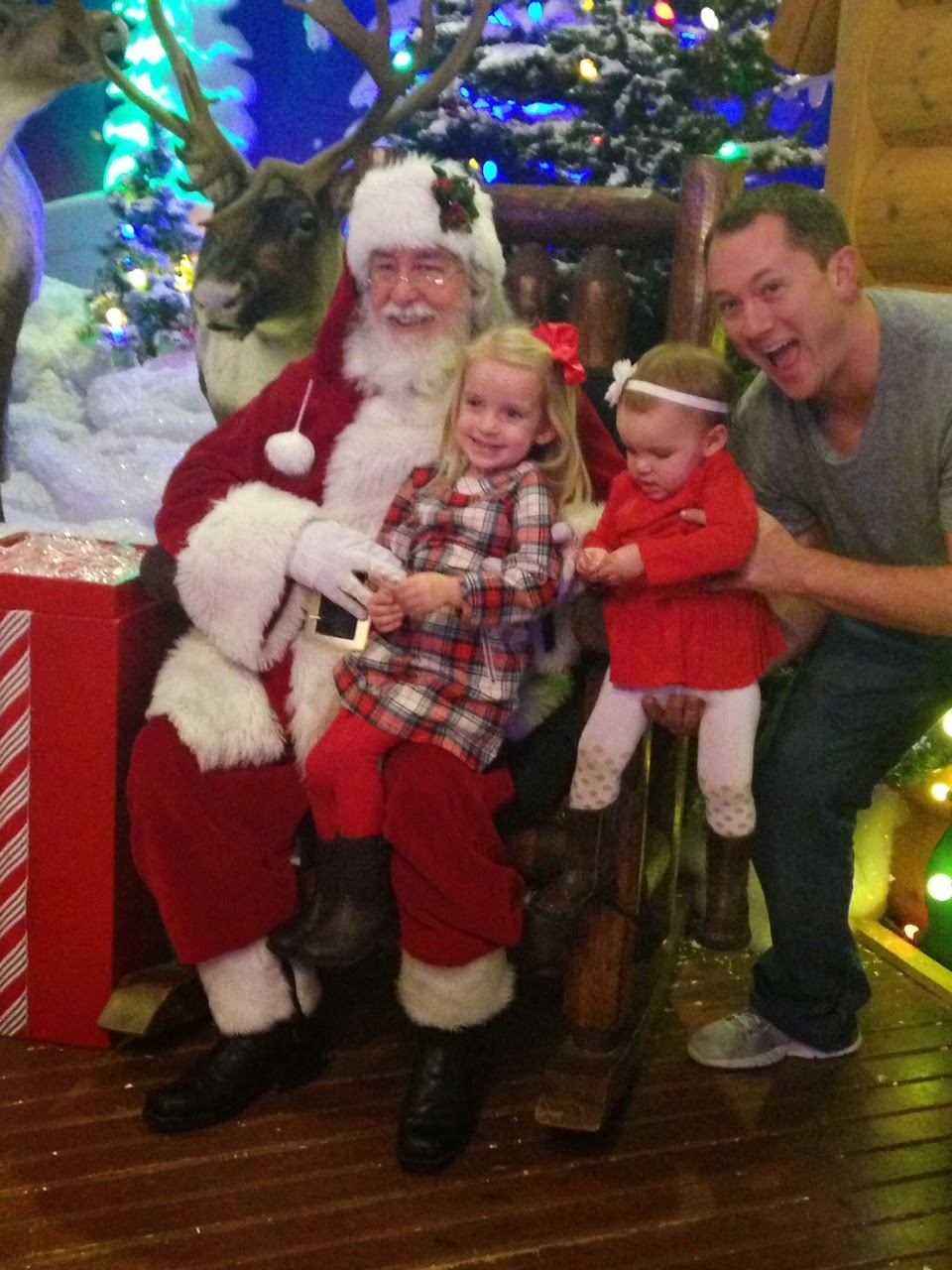