How could I forget to blog about Kaden's first t-ball experience? Not sure, but I did.

This past summer we signed Kaden up for t-ball through our local YMCA. He had been talking about playing baseball for sometime now and he could name a number of the players from the Royals which totally meant that he was ready. I went ahead and picked the 3-5 year old league since he wasn't quiet five yet and didn't want him to get discouraged in the 5-6 year old league...

The first half of the season was spent practicing and learning the game... 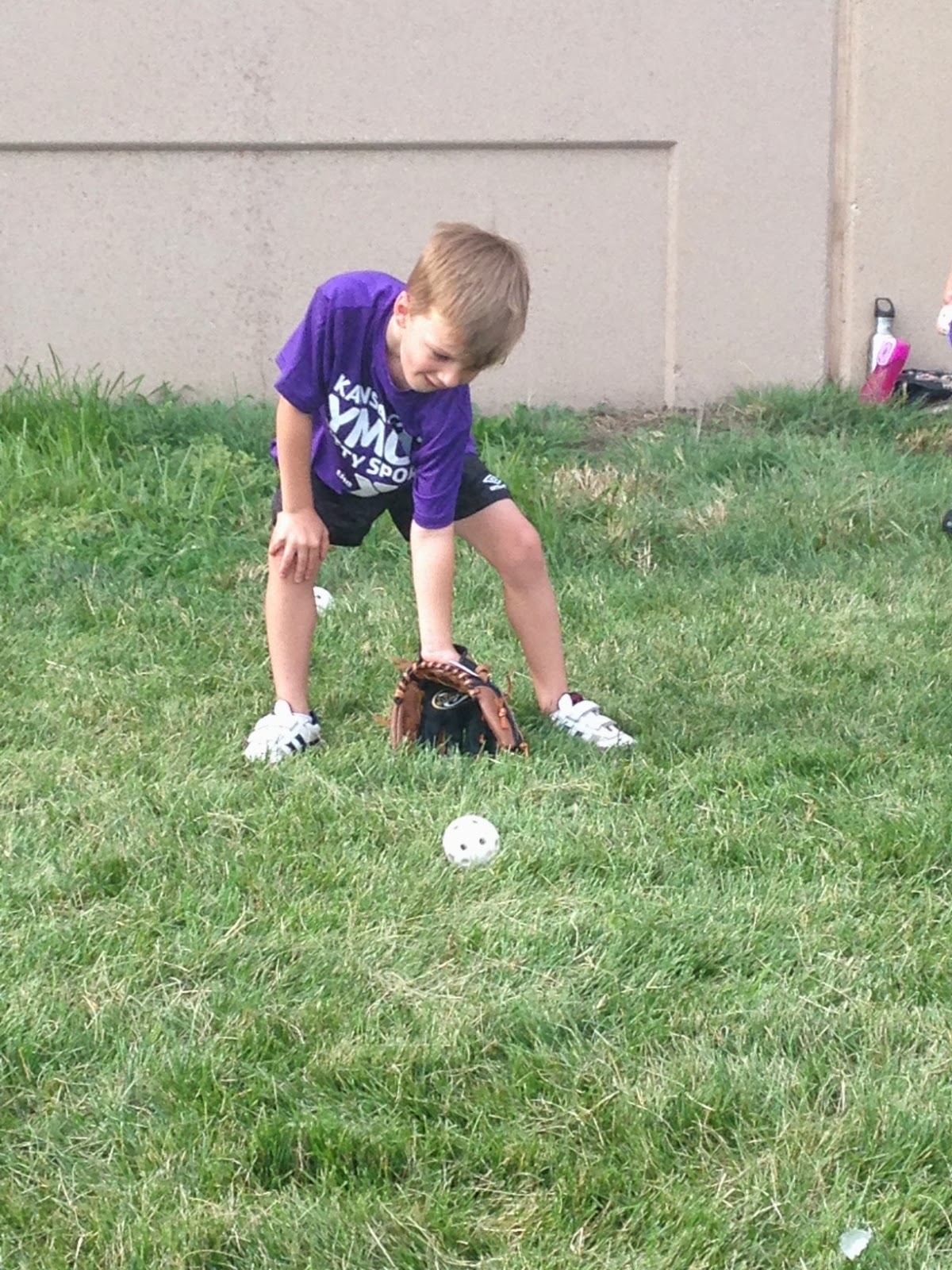 The second half of the season was spent playing games against other teams. 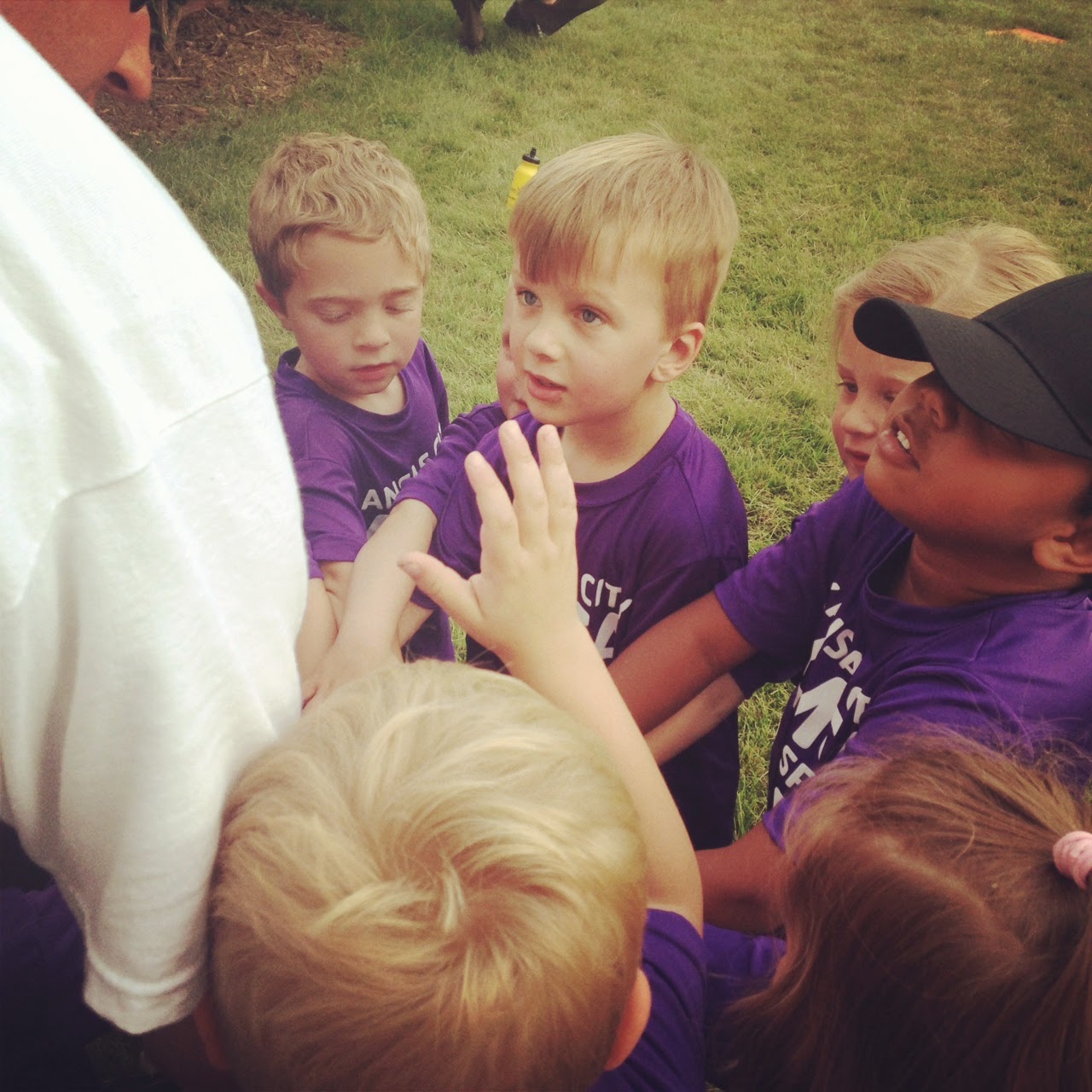 Similar to Pre-school, Tball wasn't about the playing part, well maybe the fielding part but not so much the hitting part, he had that pretty much down…it was more about socializing and learning to play together as a team.

For the most part, he got it and did pretty well but the hard part for him was waiting his turn. While on defense the kids each got a position but trying to explain to them that if you were the third baseman you didn't go after the ball when it was hit to the first baseman was a challenge. Kaden did a pretty good job sticking to his position but then got pretty frustrated that balls weren't being hit to him. He quickly learned that playing first allowed him to take part in every at bat, kid has an arm. 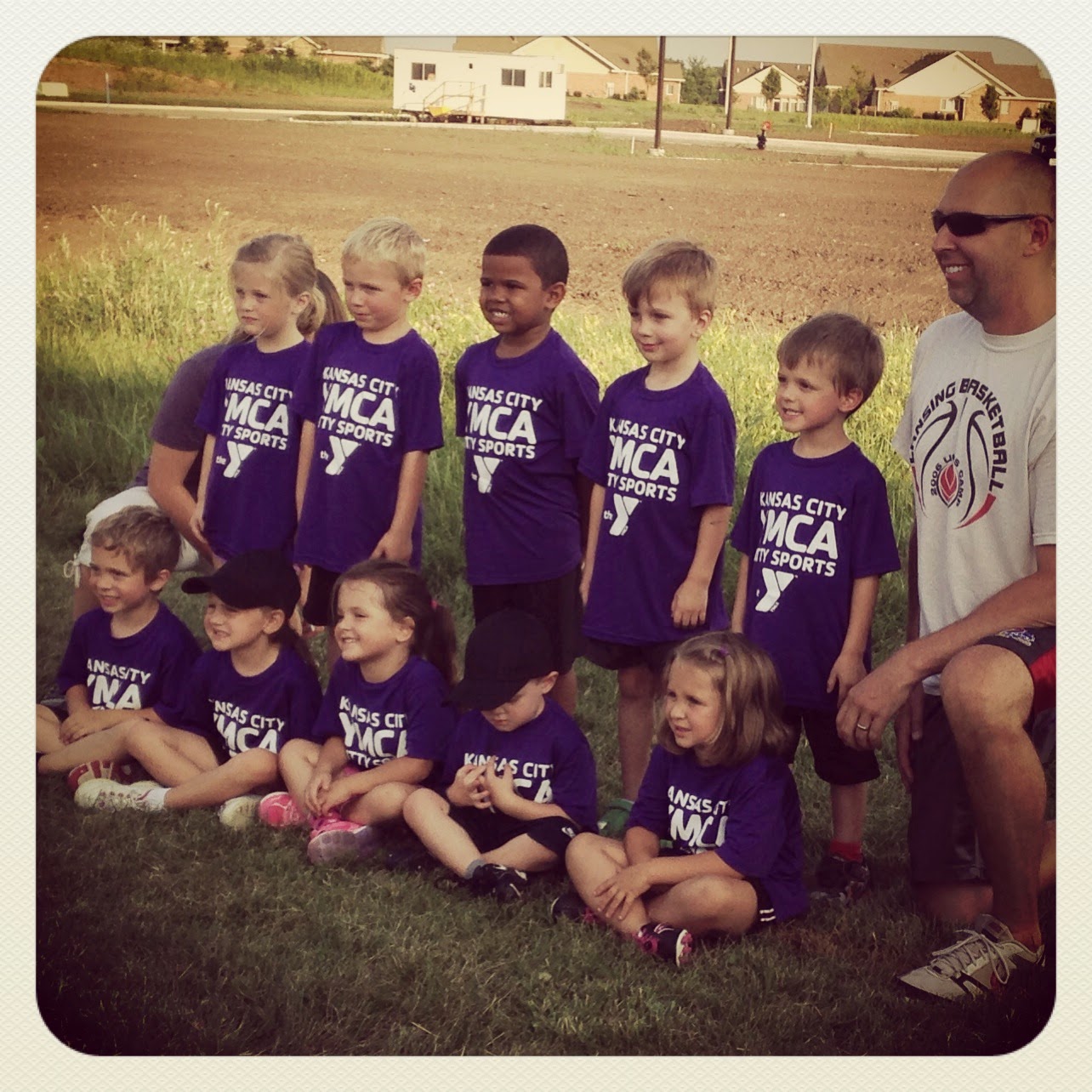 & check that out, he made back row--I could show you EVERY softball team picture from when I was little all through high school, I never made the back row! 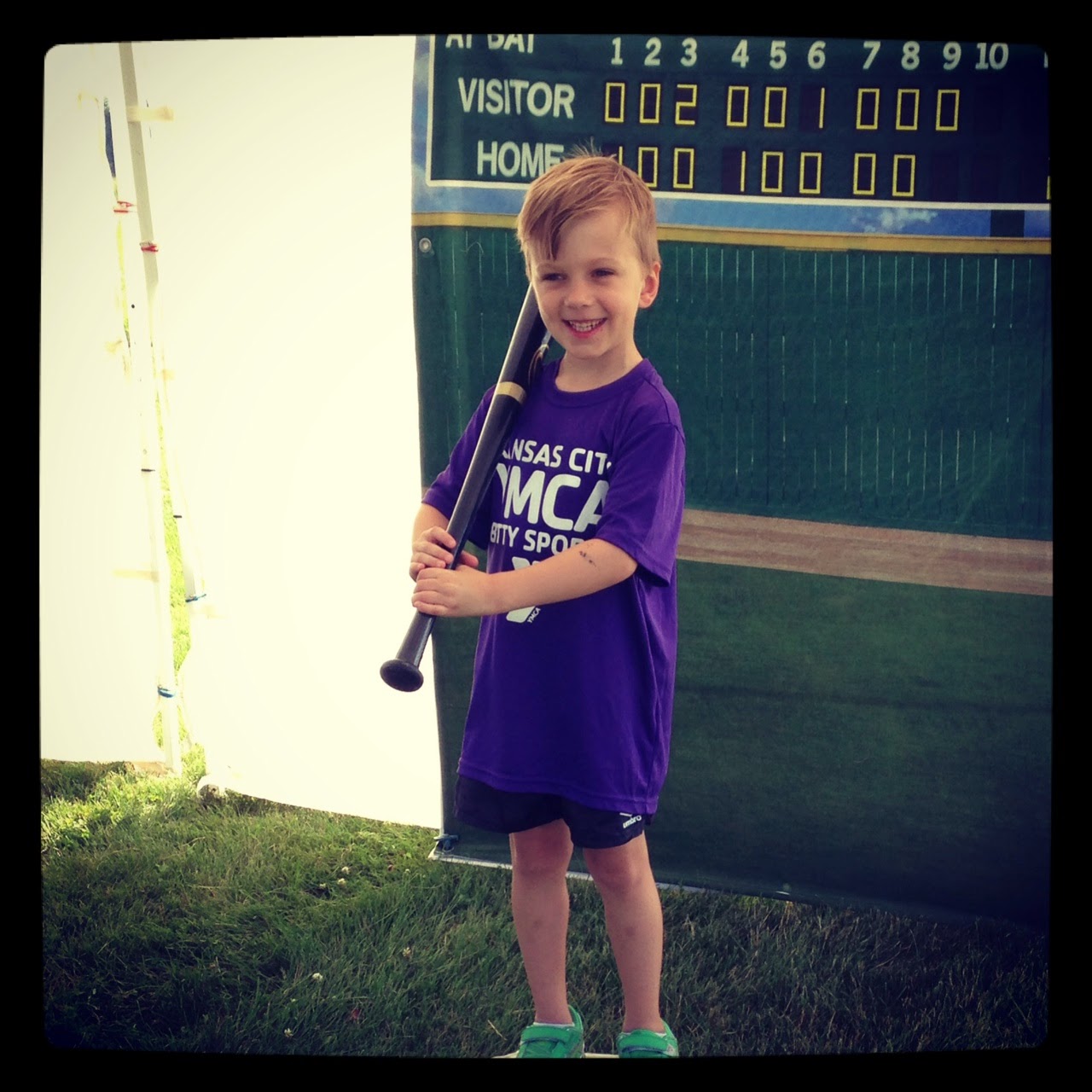 The best part of the season was when Grandma Sara surprised Kaden at one of his games. She was up here for some training & luckily was able to stop by and watch him play. It was a good thing to because on this particular day he had one of the bloodiest noses he has EVER had. Thankfully she was able to keep both him and me calm. It never gets old having your mom around. 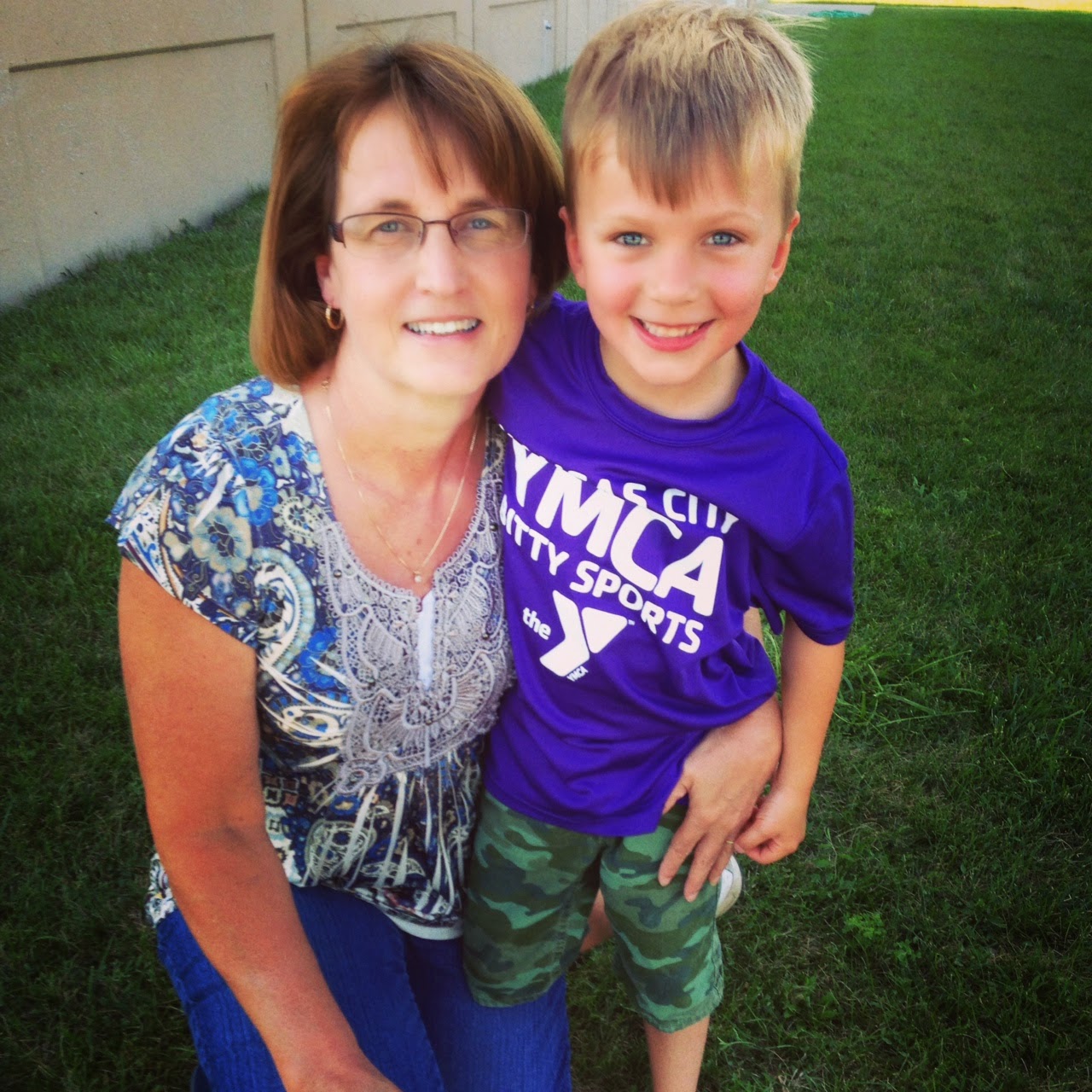 & outside of picture day, he could always be found sporting his camo shorts. They were, and still are, his favorite piece of clothing! It wasn't a terribly long baseball "season" but I for one am looking forward to his baseball future--I loved playing and attending all day, all weekend long tournaments when I was little & I am sure watching him play will be even more fun. Especially if he is wearing a smile like that.
Posted by Kayla South at 9:17 AM