Since it is only days away from Fishlegs making his final trip back to the North Pole with Santa I figured I should recap the adventures he has brought to our home this year. I've already written about how this holiday season we were going to really focus on being KIND and bringing smiles to faces--faces that we know or faces of strangers, either way, we wanted to make a lasting impression. To spread a little more holiday cheer than usual.

Although a majority of our bigger kindness adventures were during the weekend, we still tried to encourage smaller acts of kindness with the boys throughout the week. We, of course, feel as though the boys should always be kind to one another and to others; nor is it something we should have to try and get them to do but like with most things, talking about how "kind" it was for Kaden to share with Logan or how "kind" it was that he held the door open for someone else, or that they fed the dogs without us asking, seems to have increased the number of times we catch them TRULY and GENUINELY being kind. They see how happy and proud it makes us of them & that in turn makes them feel good. So yes, the kindness deeds have certainly picked up during this holiday season but I'd like to think that its more because Justin and I are making an effort to really notice them instead of it being something they are doing for Fishlegs or Santa. I guess time will only tell...

But back to some of our bigger acts of kindness, all of which aren't anything anyone else doesn't do or that we don't already do, its just this time, we included the boys. When Fishlegs arrived this holiday season he came with two boxes and instructions for the boys to fill them with toys and books. & they got right to work. As they went through their toys, I went through the books. When we were finished we had two boxes overflowing and the boys couldn't be more excited to send their old toys off to new boys and girls.

On top of the books and toys, Justin and I have been cleaning out closets. For about two months now we have had a pile of clothes that have been ready to drop off at Goodwill but we just haven't made it over there---well this past weekend turned into the perfect time to drop off our donations. We stopped by Goodwill just after visiting the local animal shelter--Great Plains SPCA. 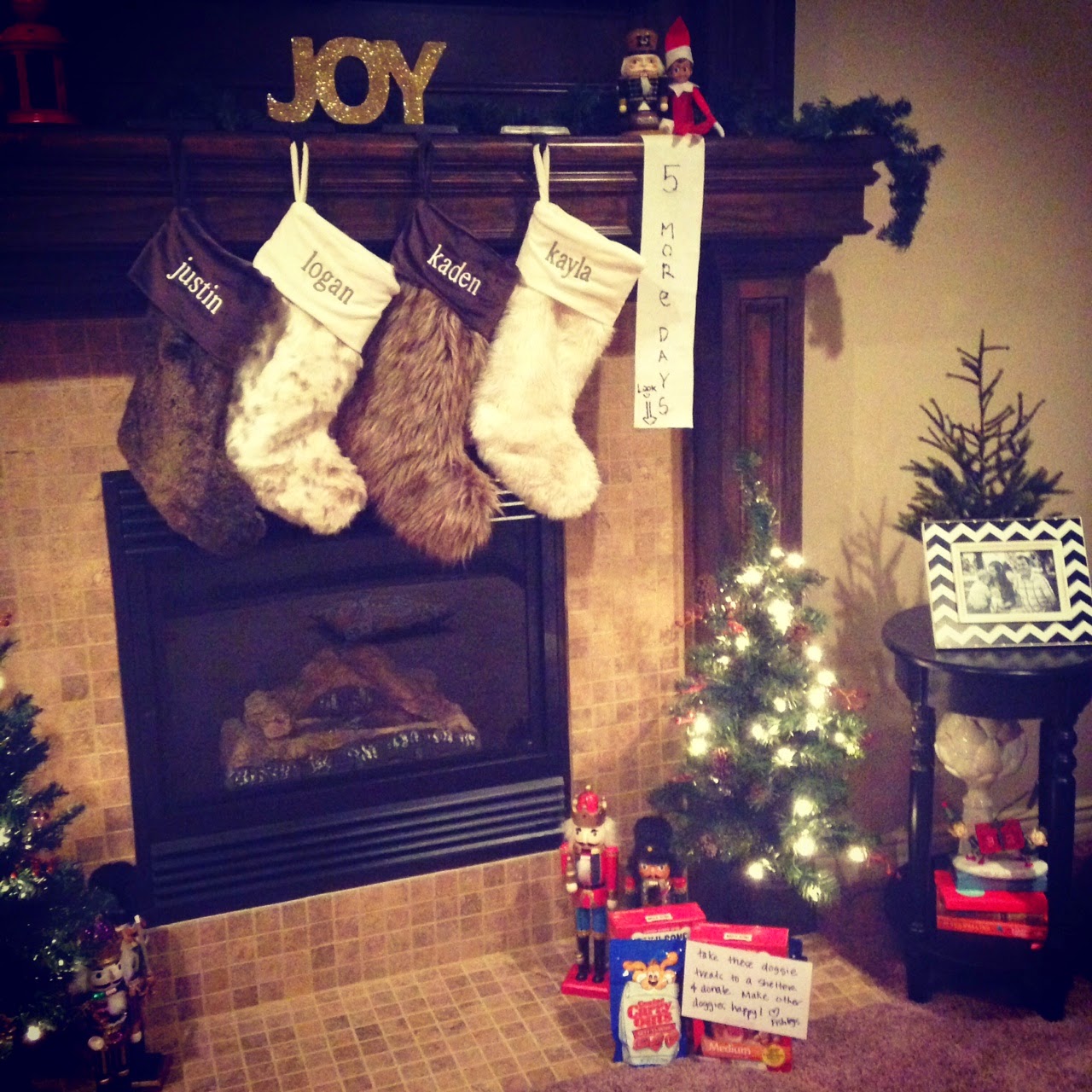 Thanks to a little nudge by Fishlegs the boys woke up on Saturday morning to a note taped to a few doggie treats. The note was of course from Fishlegs & it suggested that we make a little visit to a local animal shelter and donate some treats for the dogs that were there looking for their forever homes. 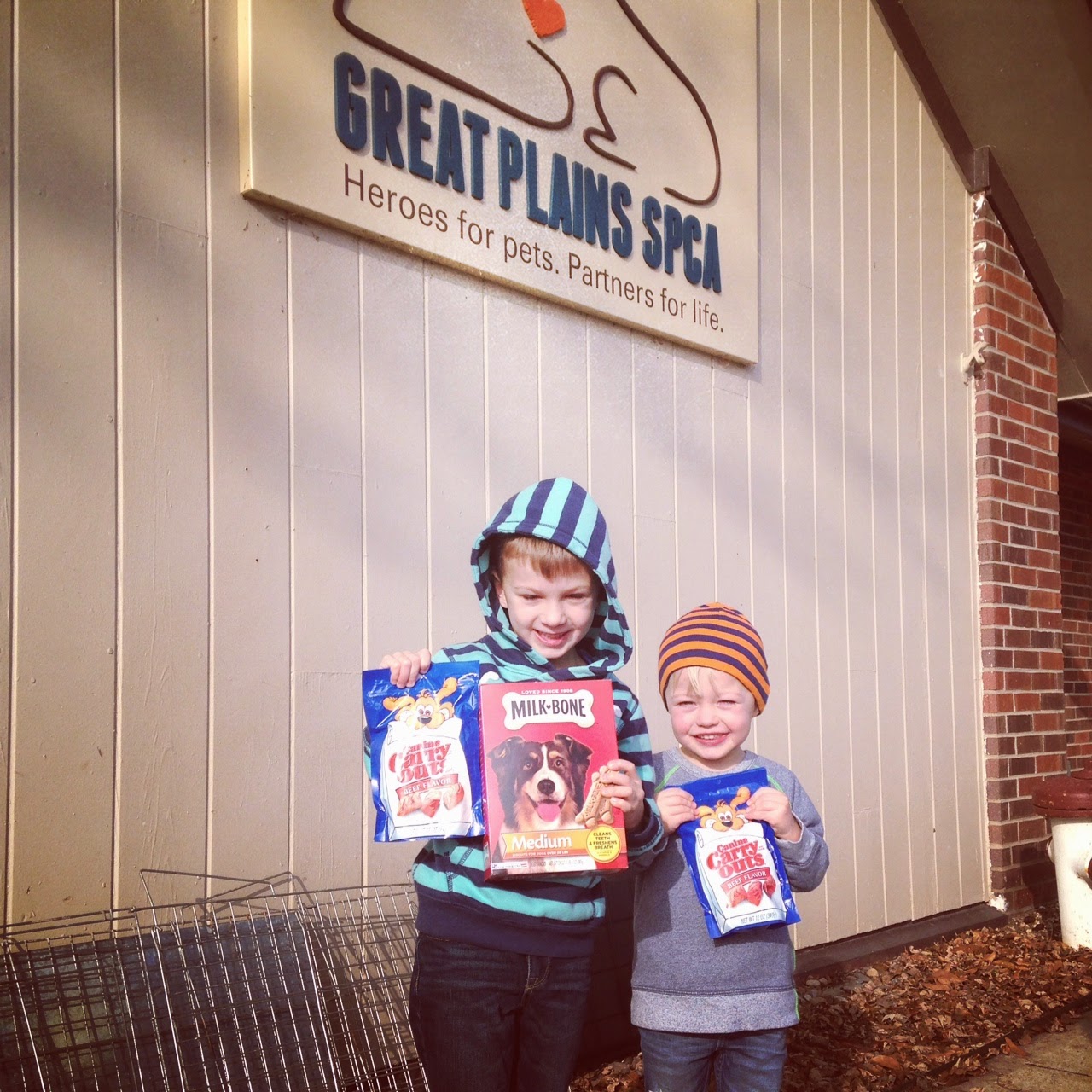 When we arrived the boys thought they were going to hand out treats to each of the doggies and were a little heart broken when they learned that it wasn't their treat time & that we were just going to leave the treats behind but they still wanted to go in and see some of the doggies and kittens too. And almost immediately as we walked in Logan started holding his nose & kept saying that it smelled yucky in here. Thankfully, his cuteness kept the volunteers/workers from being offended. One of the volunteers had the boys wait a few seconds while she went to the back and when she returned she had the cutest little puppy named Micheal Jackson--it had only one white paw. You would think that Kaden and Logan would want to pet this little puppy but for some reason or another, they are not fond of tiny dogs---I think its due to them being a little more hyper and jumping around more than what Brodi and Stoli might do as bigger dogs. The nice lady asked if she could take Kaden and Logan's picture and put it up on their Facebook page & they of course were more than willing to have their picture taken.

After having left Great Plains SPCA and Goodwill we headed over to Caribou Coffee to pick up some hot chocolate. We thought it would be nice to drive around and not only give a donation to the Salvation Army but also treat the bell ringers with some hot chocolate--after all it is Kansas and it is pretty chilly here. So we got a few hot chocolates and we started our search for bell ringers---we went to the Merriam Marketplace but no luck so we decided to head to the mall, all while hoping the hot chocolates didn't get too cold. The first few stores that we drove by had bell stands but no ringers, so the search continued & then finally we found our first bell ringer. We pulled over to the side, and Kaden and I hopped out (my mom stayed with Logan in the car), Kaden ran over to put his money in the bucket and then I handed him the hot chocolate to give to the kind gentleman. He held out the hot chocolate and said, We brought you a hot chocolate, thank you for standing in the cold and ringing the bell. At first he was a little uncertain but then with the biggest grin he accepted the hot chocolate, thanked us & wished us a Merry Christmas. He told us to be safe, that it won't be merry if we aren't safe & right he is. 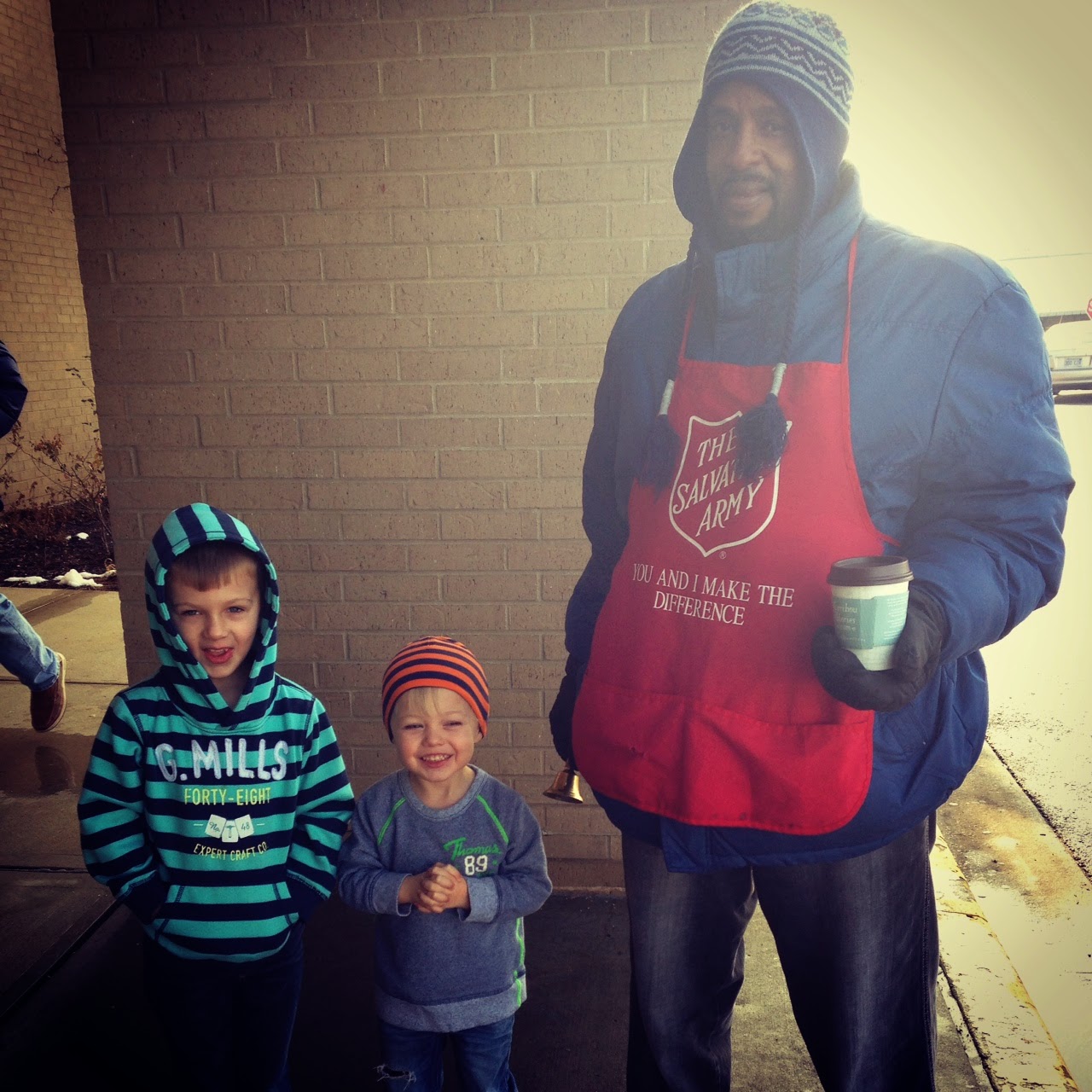 It didn't take long to find another bell ringer but this time it was Logan's turn and he was so excited. He ran up there, stood on his tiptoes and reached as high as he could to put his money in the bucket. I then handed him the hot chocolate to deliver to yet another nice gentleman who was equally surprised but very thankful. He even gave Logan his bells to ring for a couple of minutes. 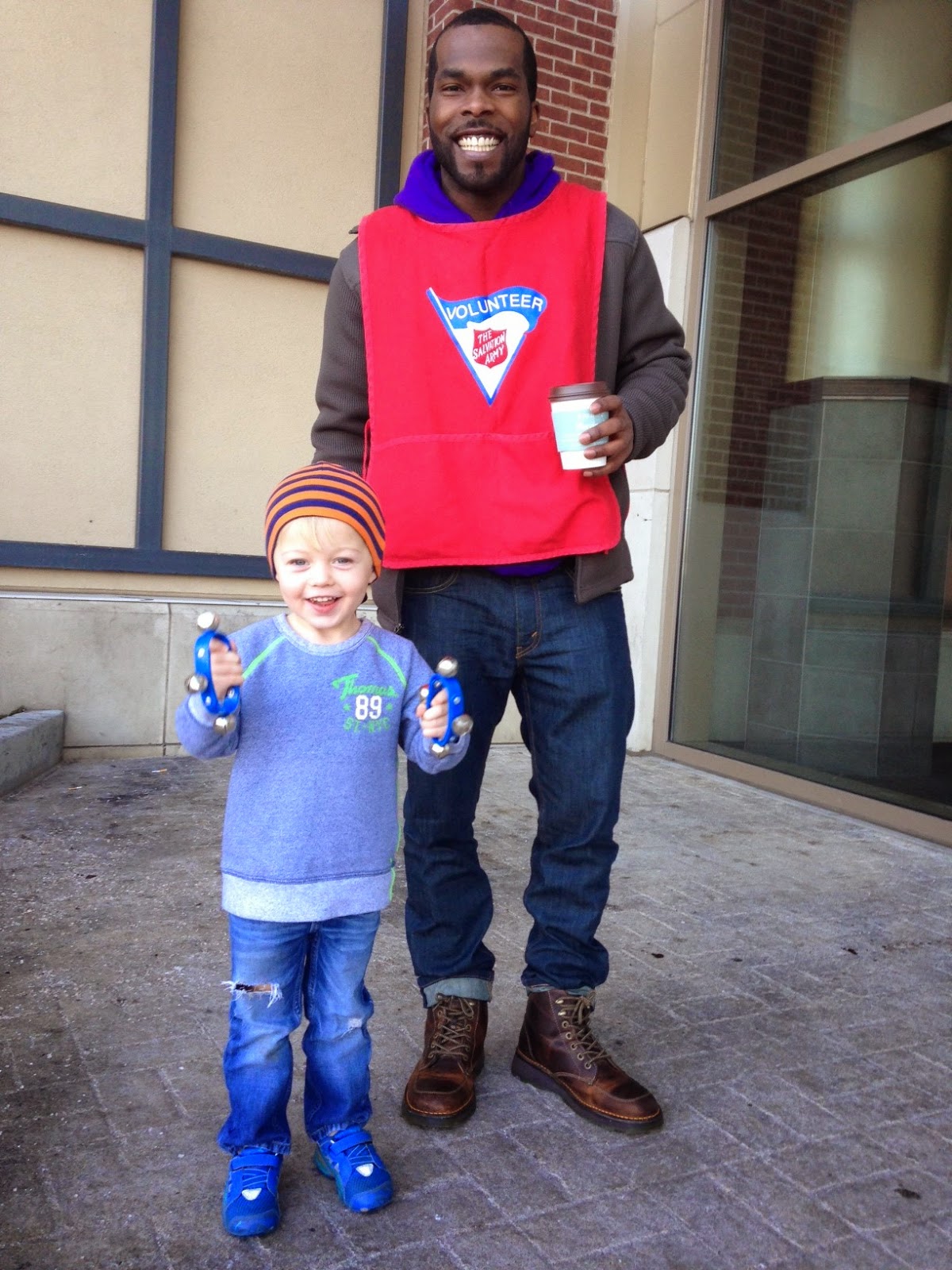 We did this a few more times and each time the boys got more excited. It felt good to see them so excited about giving. About bringing a smile to someone else's face & honestly, when you see someone else smile a genuine smile, you can't help but smile too.

The kindness adventures don't end there, a few weeks back Fishlegs hid 12 candy canes around our house. The boys read the note he left & started looking for all 12 candy canes. When they were all found they split them up into two piles--one for Logan and one for Kaden & throughout the day they shared their candy canes with others. They shared a few at our church's Very Merry Morning and a few with Grammy & Kathy when they arrived to take them to see Rudolph at the Coterie Theater.

I think my favorite part of this whole holiday season has been seeing the TRUE meaning of Christmas present in our boys. Of course we want the boys to enjoy the holiday season and we can't wait to see their eyes light up on Christmas morning as they come racing down the stairs to see what Santa has left them but we also want them to remember there's more to it. That...

God loved the whole world so much that He gave His only son. John 3:16

We worry all the time about whether or not we are doing enough to ensure our boys grow up being kind, respectful, & loving human beings and sure we (they) have our moments but its times like these that I know we are setting a good foundation for them. They may need to be reminded over and over again at this age but hopefully some of the traditions we have started this year will not only spring up during other parts of the year but will also be some of the things they look forward to most during future holidays.