This past week Kaden's school held their annual Christmas program which meant the pre-school class was kicking off the show again. Which also meant that we had to make sure to take Kaden to the bathroom before the show started because last year he almost missed his part!

During the weeks leading up to the Christmas program we quickly learned that Kaden would be signing the same songs has he sung last year. He didn't seem to mind & honestly, he had a lot more confidence this year--we were in for a treat.

On the day of the program he had an all school run-through in the afternoon which meant I needed to pick him up from school at his regular time, by an hours worth of time & then get him back to the school for practice, so we had a little lunch date. He picked the location & he got to pick were we sat & of course he picked the high stools. 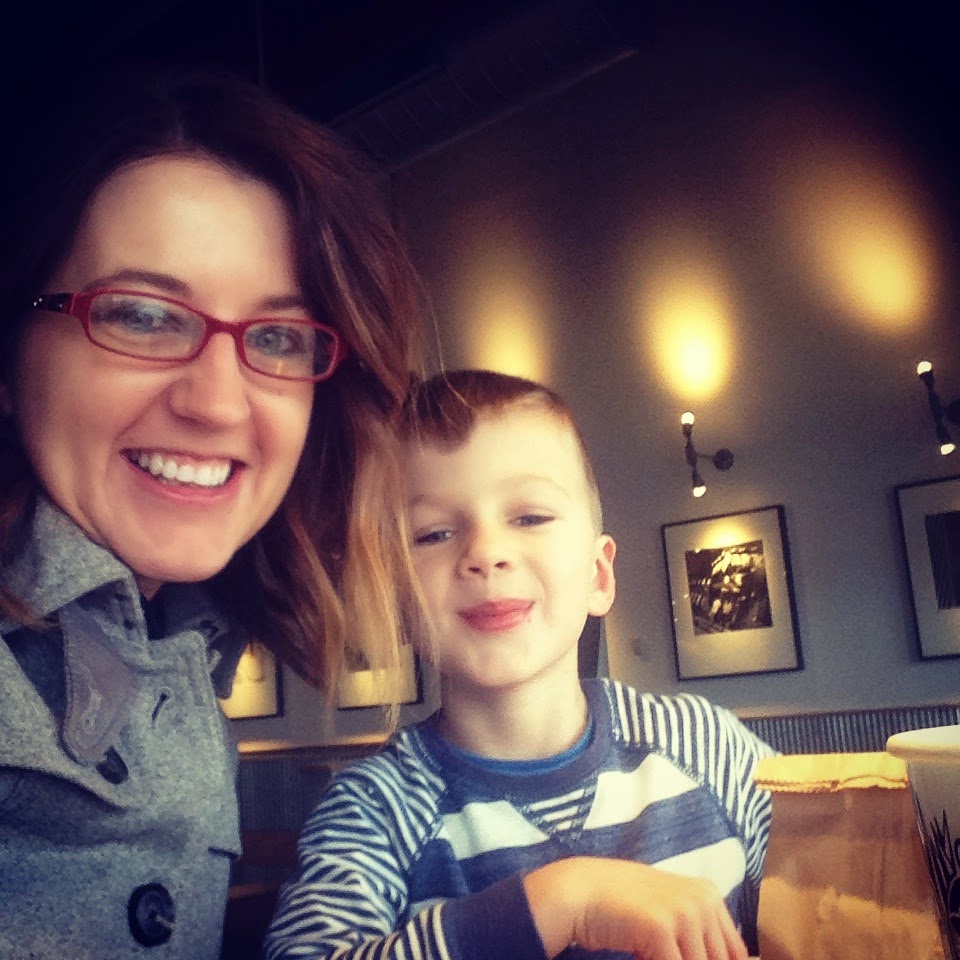 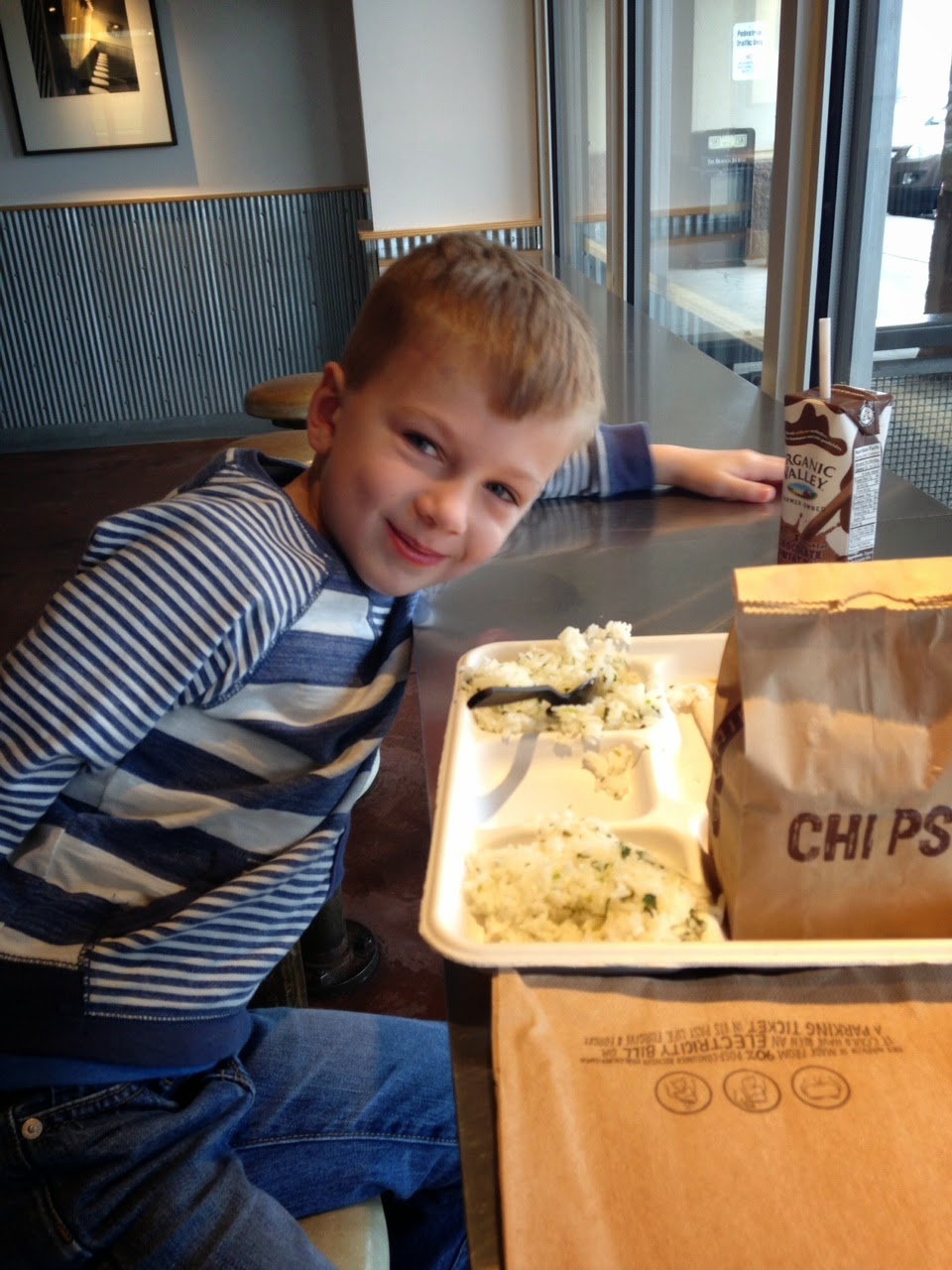 After eating we ran to Target to pick out his gift to take to his holiday party at class and whoa, what an experience that was. You see, Kaden and Logan don't venture out to toy stores with me---in the last year they may have been once and that was to let Kaden spend a little birthday money. They were both in the cart on that trip. This trip, I let him hold my hand. He spent about 15 minutes in front of the Skylander Wii game. Eyes popping out of his head. Kid was in heaven. I finally managed to get him to move on, we found a gift for a classmate and we made our way back to the church.

His teachers said we could just meet in the classroom and they would line up all the kids and we could walk over to the church together so like good students, we followed instructions. They started lining up and I noticed a trend, they were lining up tallest to the shortest (tallest being mainly the older kids in the class and the shortest also being the youngest). A few names were called and then they called Kaden's---WHAT, I never made it to the top row, even if we did something with the class below us, always front row and on the end. But no, not Kaden, not our 95th percentile in height Kaden.

& let me just tell you about his teachers---the most patient ANGELS in the world. I don't know how they do it, or any pre-school or early childhood/elementary teacher/day care provider for that matter. ANGELS. It takes a very special type of person to handle a classroom full of 3-5 year old tiny people. I sat there in amazement & thanked God for providing these individuals with patience and love to do what they do. Next time you run into your child's teacher, give them a big THANK YOU. They probably don't hear it enough.

Now back to the practice. It went a little something like this...


Which is a huge improvement from last year. Justin took Kaden and he said he made it through the first song but started crying during the second song and continued all they way through. Even Kaden remembered this because when he got in the car and I told him how proud I was of him said he instantly said, "I didn't cry mom! I did last year but not this year."

After practice we went and picked up his little brother, headed home to get cleaned up and then off we went to celebrate his performance with a little bite to eat with Grammy. 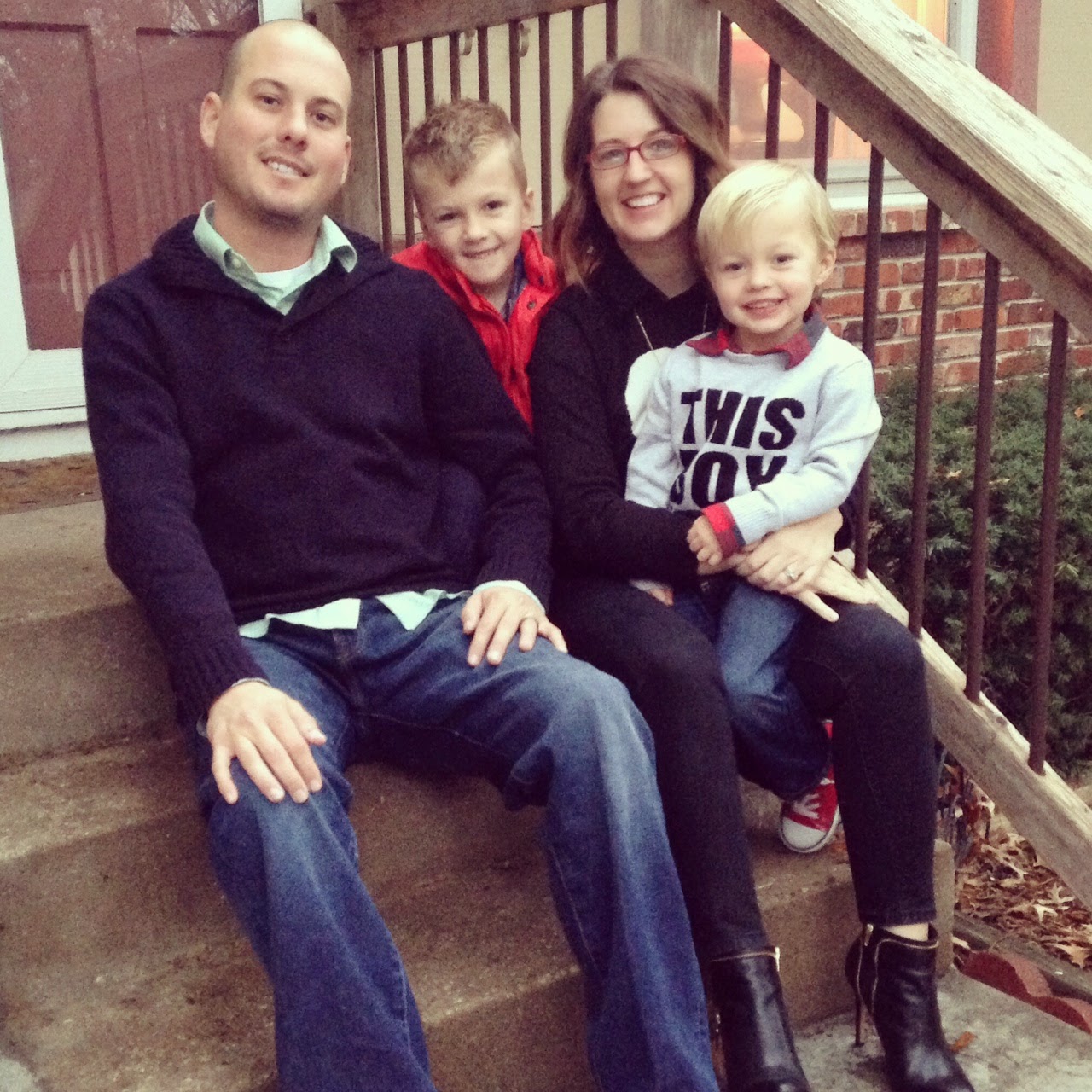 As soon as we made it to the church that evening Kaden took off. He didn't need us to escort him. As I watched him find his seat I felt a little tug on my arm, "Mommy, can I go see Big Lily? I want to give her a hug." You see, over the summer there were two Lilys at Brenda's baby Lilly and Big Lily, well Big Lily goes to school with Kaden and on Wednesdays, Logan gets to see her--he loves Big Lily. So with his big eyes looking up at me I walked him over to see Lily & then we took a few pictures of Kaden with the two girls he talks non-stop about---Lily & Sophia. 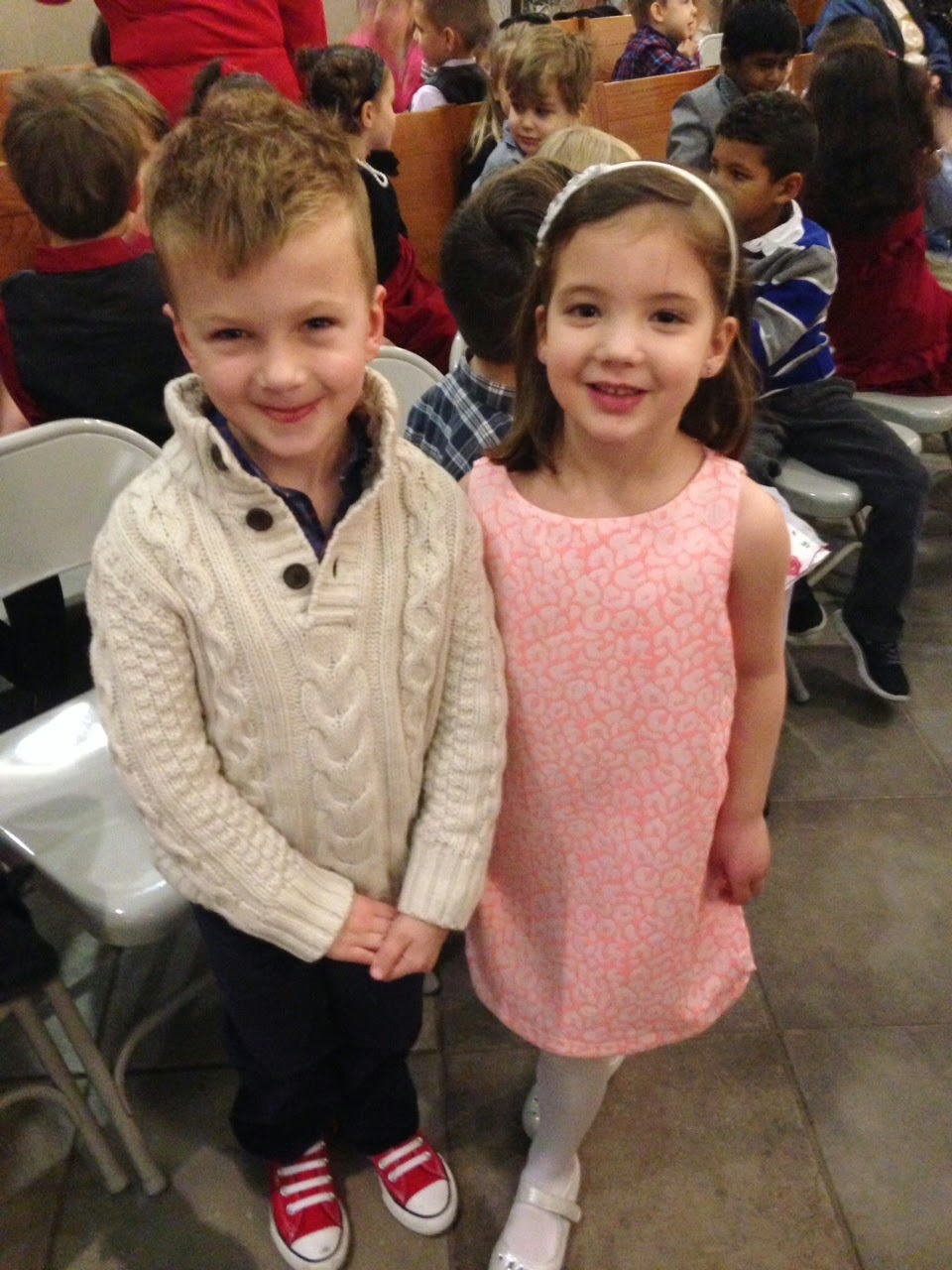 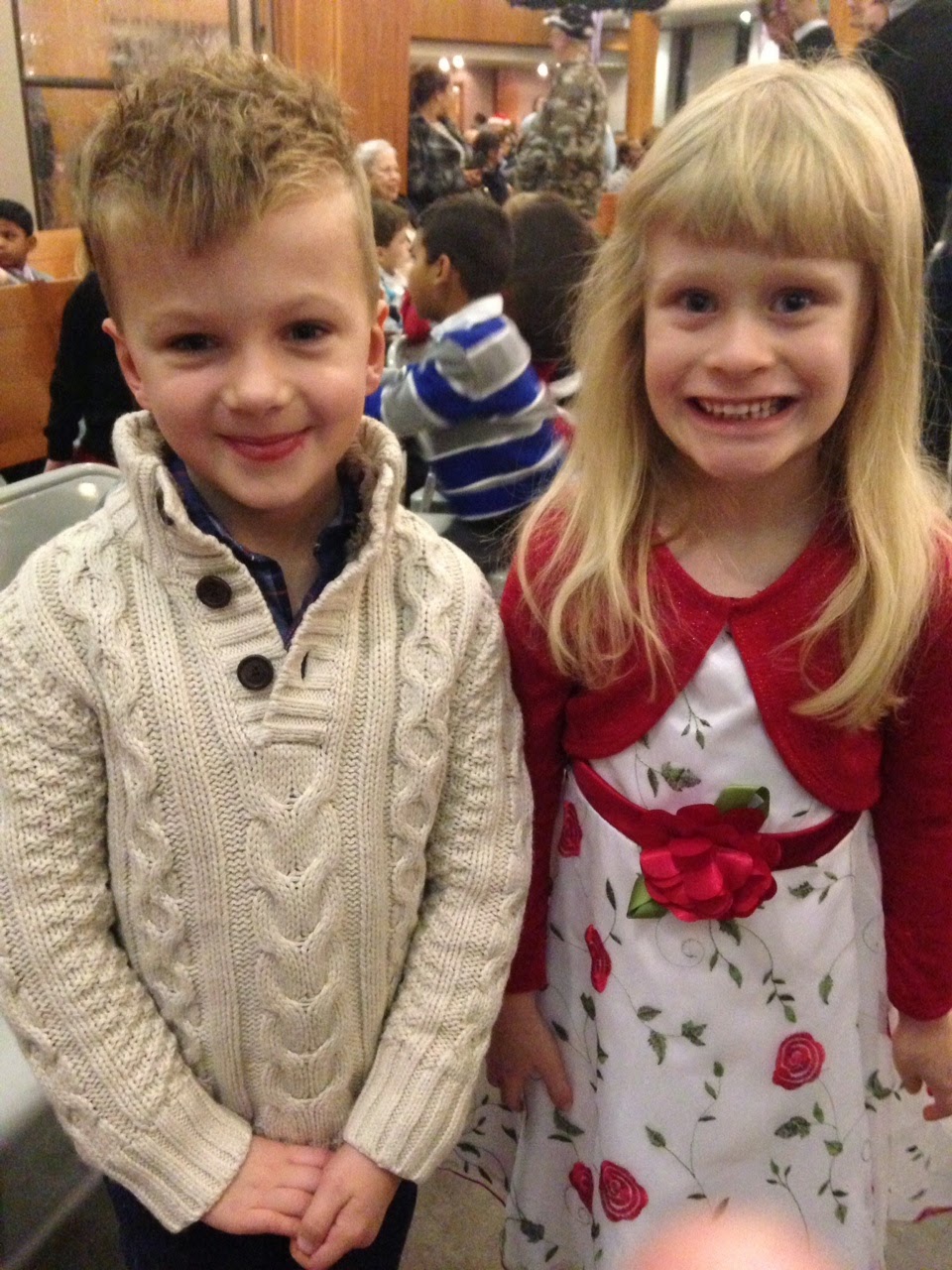 We quickly took our seats as the show was about to begin and all at once the pre-school kids stood up and started making their way to the stage. We were so proud of Kaden already and the show hadn't even started...

Apologies for not having an video of the actual performance. it was VERY poor quality, I suck at using my video feature on my nice camera--I need to take a crash course or decide to give up and get a real video camera.

From the very first note we were smiling though. He was nice and loud, about two seconds ahead of everyone else and had one of the loudest HO, HO, HOs of the class. & he was so excited too. As soon as he took the stage he looked around for us and once he spotted he started waving great big. The love that we have for this kid is unreal. He just makes my heart smile.