(& forgive me for the crappy photos--I pretty much put the camera down and used my phone for Christmas morning & then turned my camera on auto for the rest of the day. I wanted to be as present as I could be while still capturing memories!)

I thought the boys would wake up earlier than normal but for some reason they slept in later than normal. Once they were up, both Justin and I ran downstairs so we could watch their reactions. As soon as we gave the okay they barreled down the stairs and abruptly stopped right smack dab in front of the tree.


It took no time before they knew exactly what Santa had left them--a Wii with a few accessories and a Skylanders game. They looked it over  quickly and then went straight to the stockings. Out of the stockings came the usuals--underwear, toothbrushes, socks---and a few surprises too--flashlights, gum, finger puppets, new arts and crafts markers and pencils, slap bracelets & EOS Chapstick. We probably could have ended Christmas there and they would have been totally satisfied but there was more. 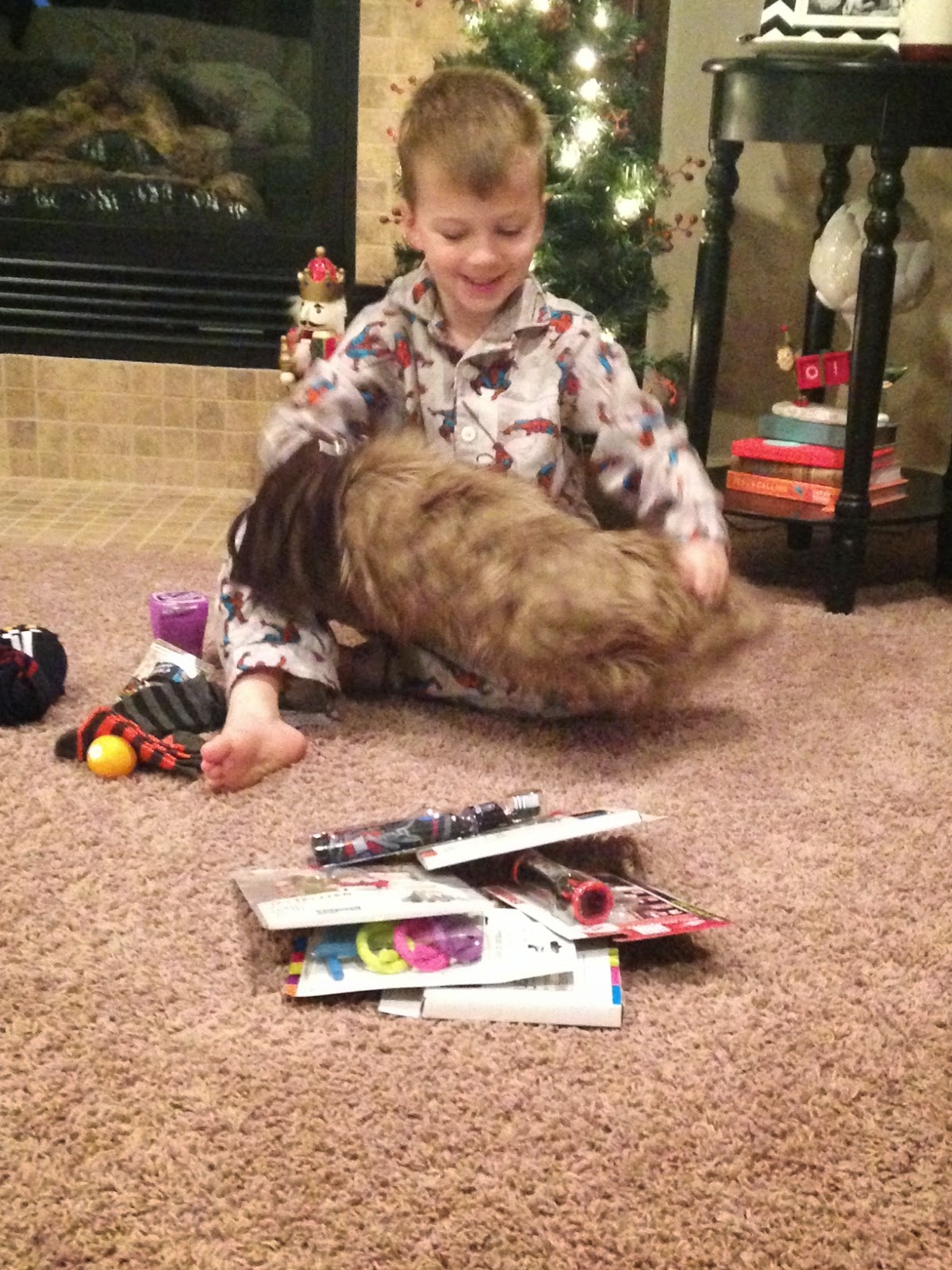 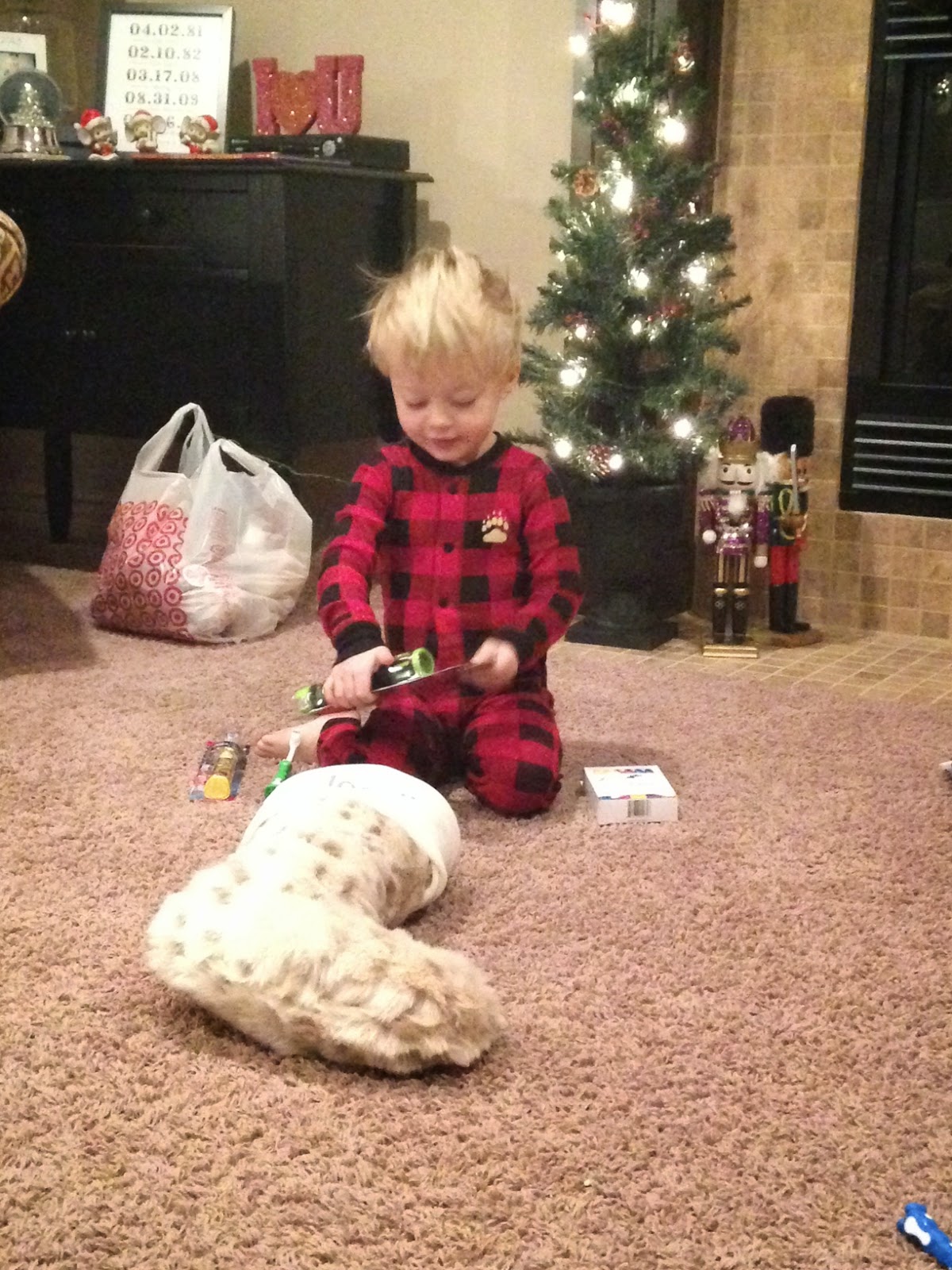 Now back to the gifts we get for the boys...

My sister started a wonderful tradition with her kids and I knew as soon as we had kids ourselves that we would do something similar. The boys get three gifts a piece---a wear, a read & a want. Why three? Well, if three gifts were good enough for Baby Jesus, then three gifts are certainly good enough for our boys. On top of the three gifts we did one family gift that would be taking us on a little adventure later on in the day.

The read. I was in IKEA about a month or so ago and saw that they had large hardback books that had matching stuff animals to go with each story. Logan got The Frog Prince with came with both a princess and a frog that transformed into a prince--it's pretty sweet. Kaden got The Elk King which came with a HUGE elk that he believes is a moose, we thought it was appropriate considering Moose is one of his most favorite Royals. 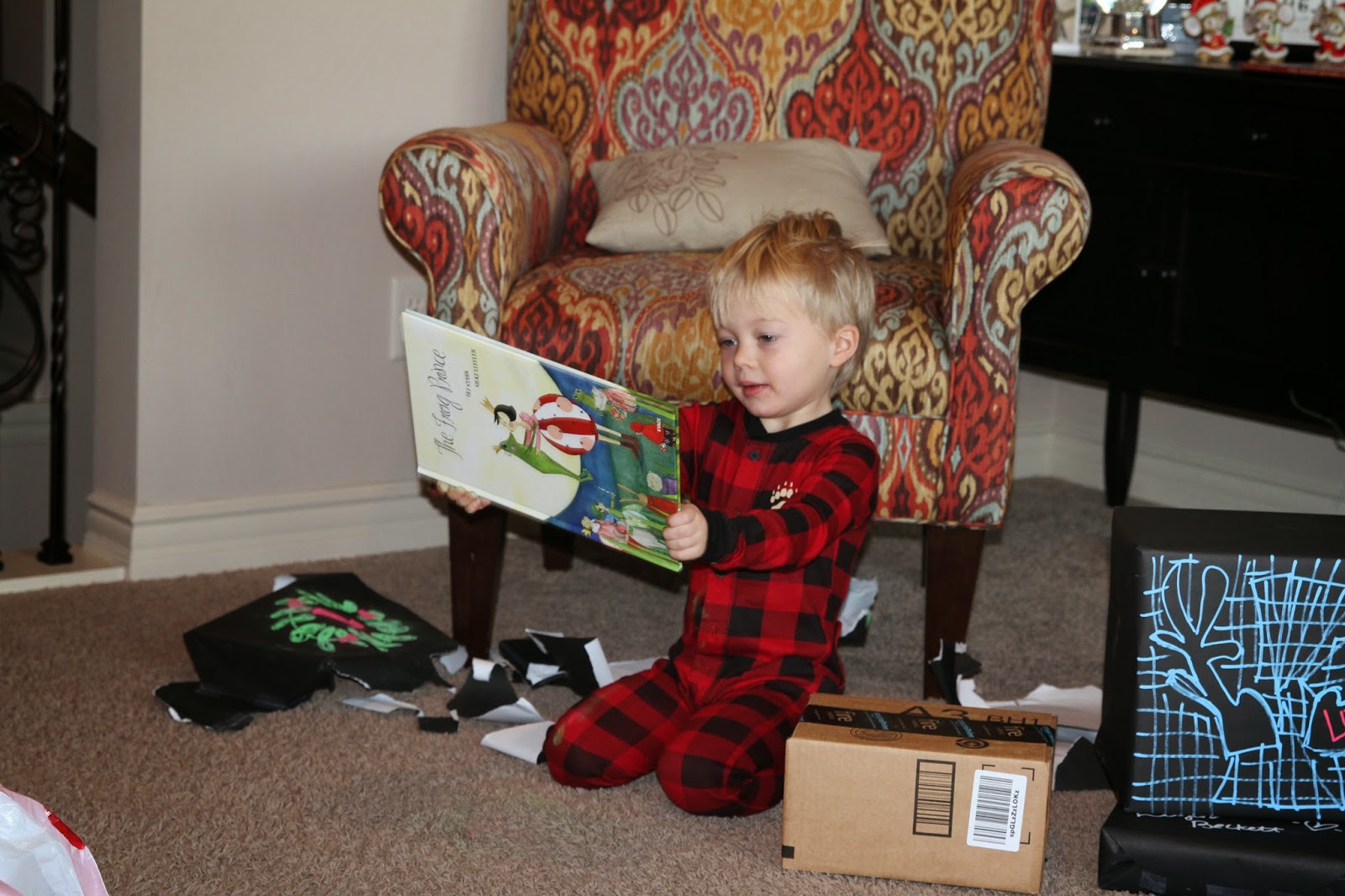 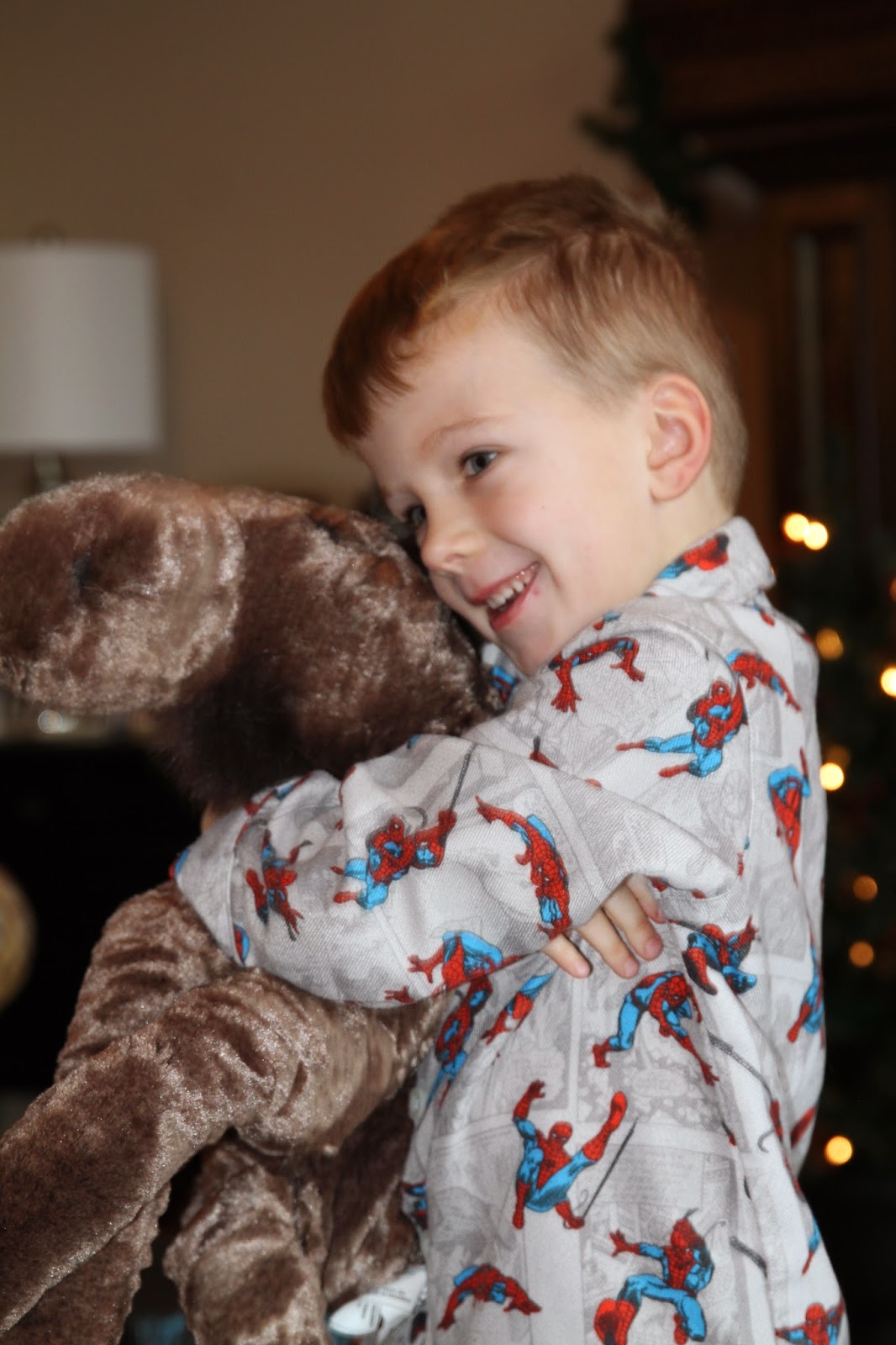 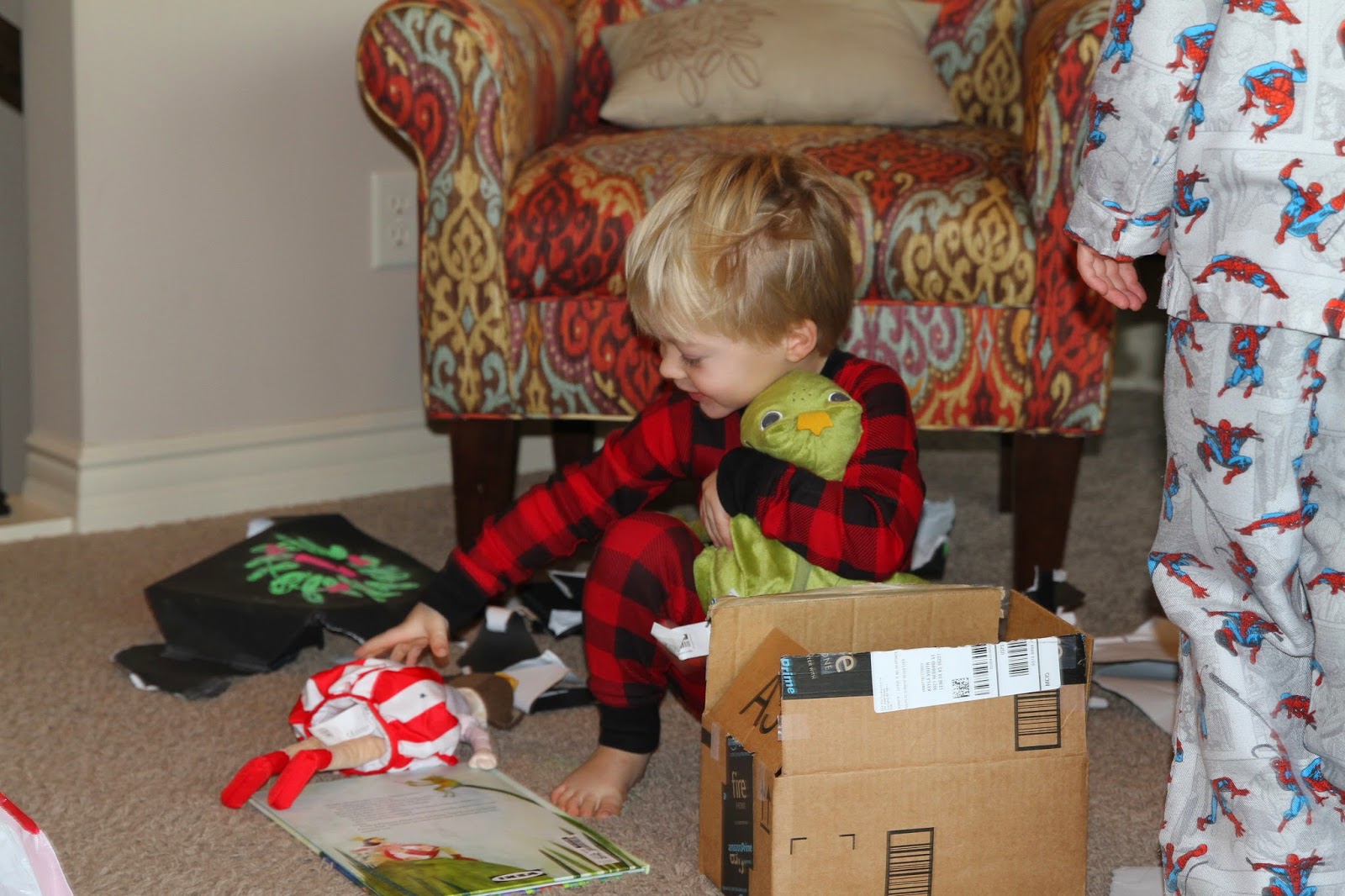 The wear: Logan received a Batman sweatshirt and a Superman t-shirt. & here I thought Kaden loved Superheroes--not as much as Logan does. Each day he has to wear something in the Superhero family, some days you can catch him in a Spiderman shirt, a Superman hat and Batman underwear--seriously, no joke. Anyways, I found this Batman sweartshirt that has Batman ears on it at H&M and knew he had to have it.

Kaden's wear wasn't as exciting, a sweatshirt and plaid collared shirt from H&M. 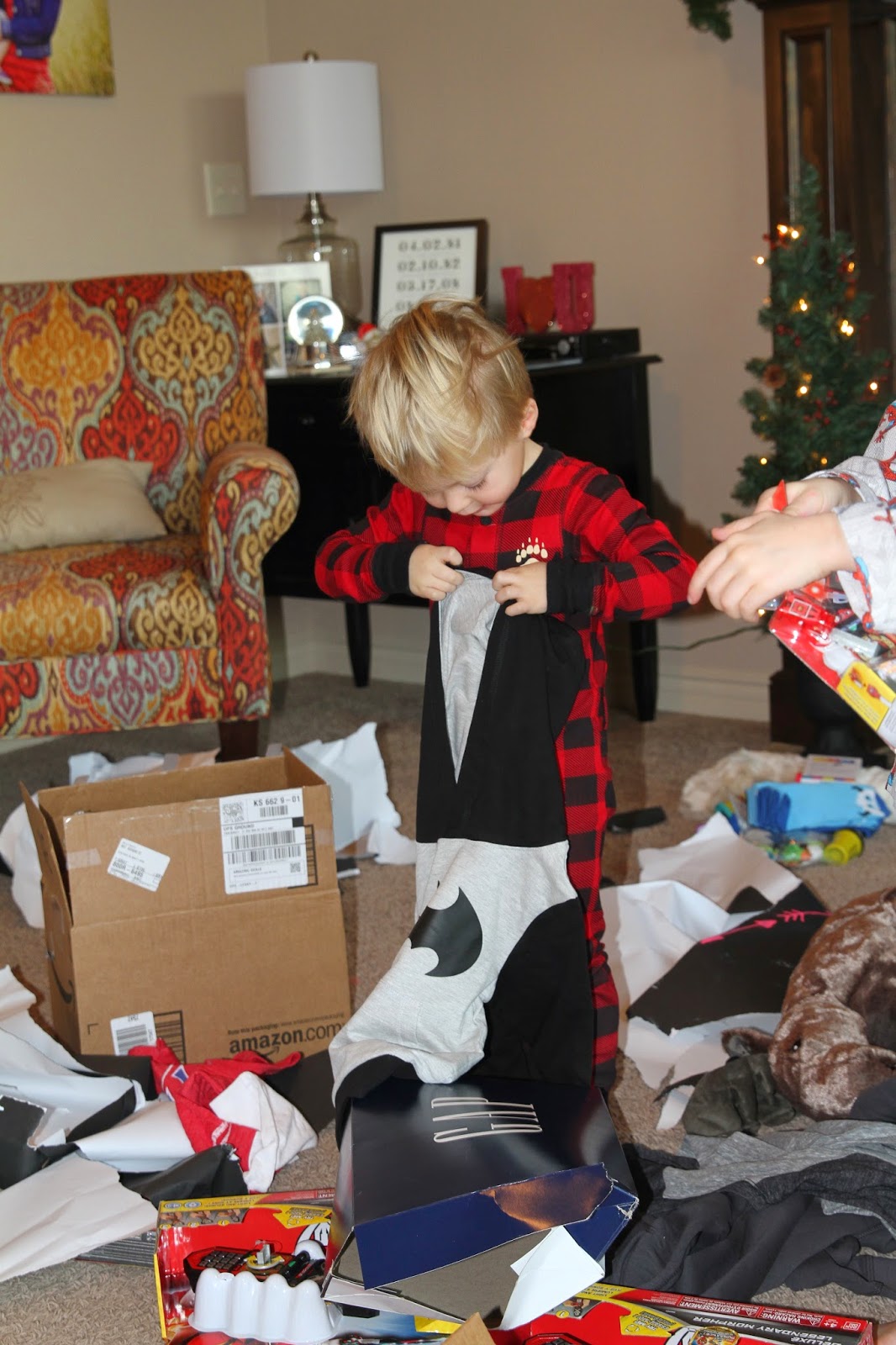 The want. The boys have been asking for some sort of Power Ranger phone with keys and low and behold, I actually found one at Target. And on sale. & you know if I get one for one of the boys, the other needs the exact same thing. Their eyes lit up the moment they ripped open these boxes and I think I heard a This is the BEST Christmas EVER coming from Kaden's direction.

As soon as the boys were finished opening their gifts Justin started the Blueberry Butter Braid and I went to work on setting up the Wii. It didn't take long and both boys were cruising away on Mario Kart. They spent most of the morning in 11th and 12th place but trust me, it didn't take long before Kaden was winning trophies left and right.

We put our lil family Christmas on pause as we celebrated the South Christmas but once things had settled down and we picked up the house a little we told the boys it was time to jump in the car, we had a surprise. 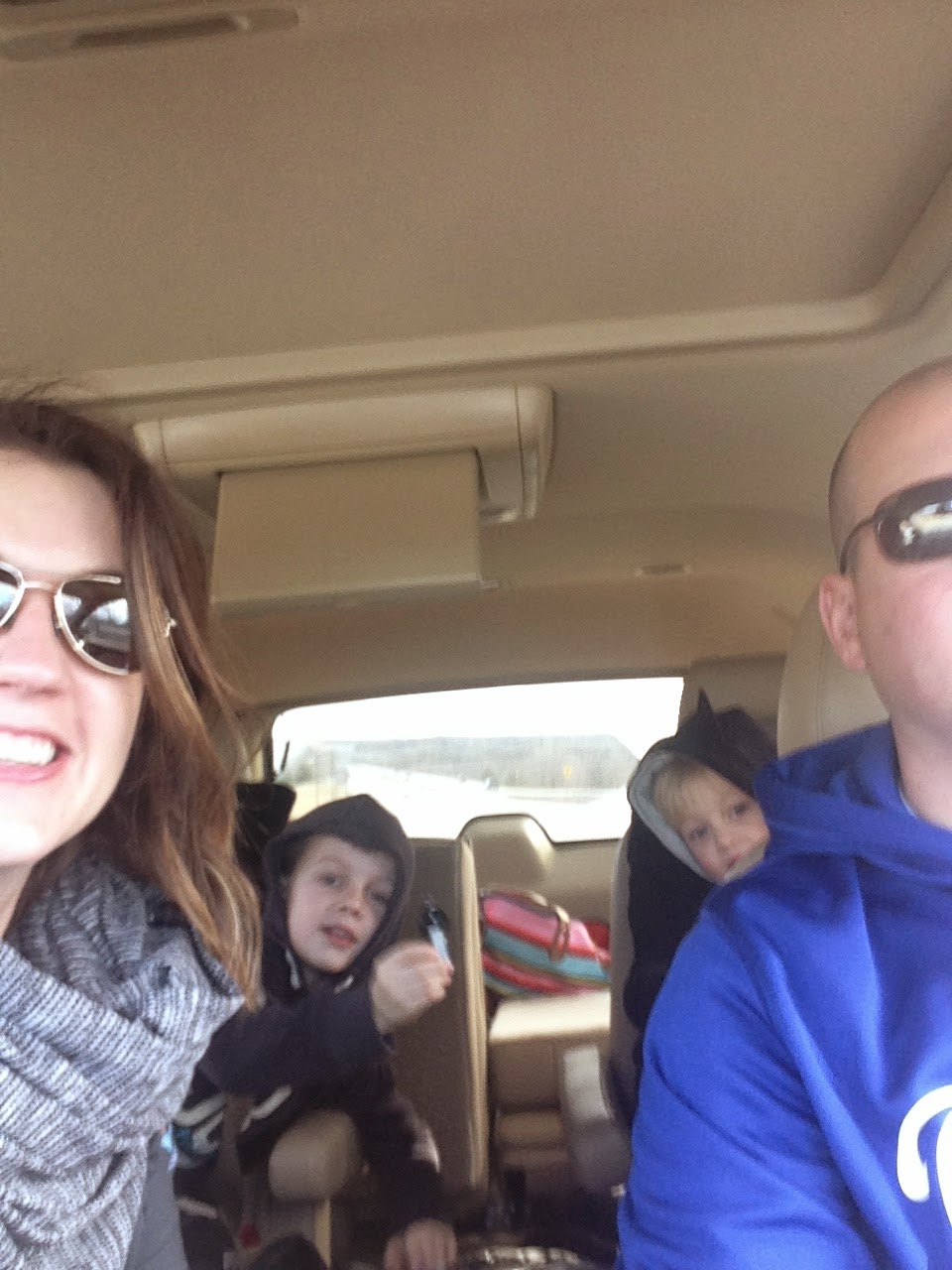 They had no idea where we were going or for how long because they didn't realize I had packed their suitcase. As we were driving we asked if there was any place they would like to go---Kaden's response was to play at Korie's & Logan's was Ummm, let me think about it, to maybe stay in someone else's house? He was pretty darn close. We pulled up to Great Wolf Lodge and they both were wondering if we were at a giant house or a hotel, the log cabin look was throwing them off. I explained that we were staying in a hotel but that wasn't the only surprise… 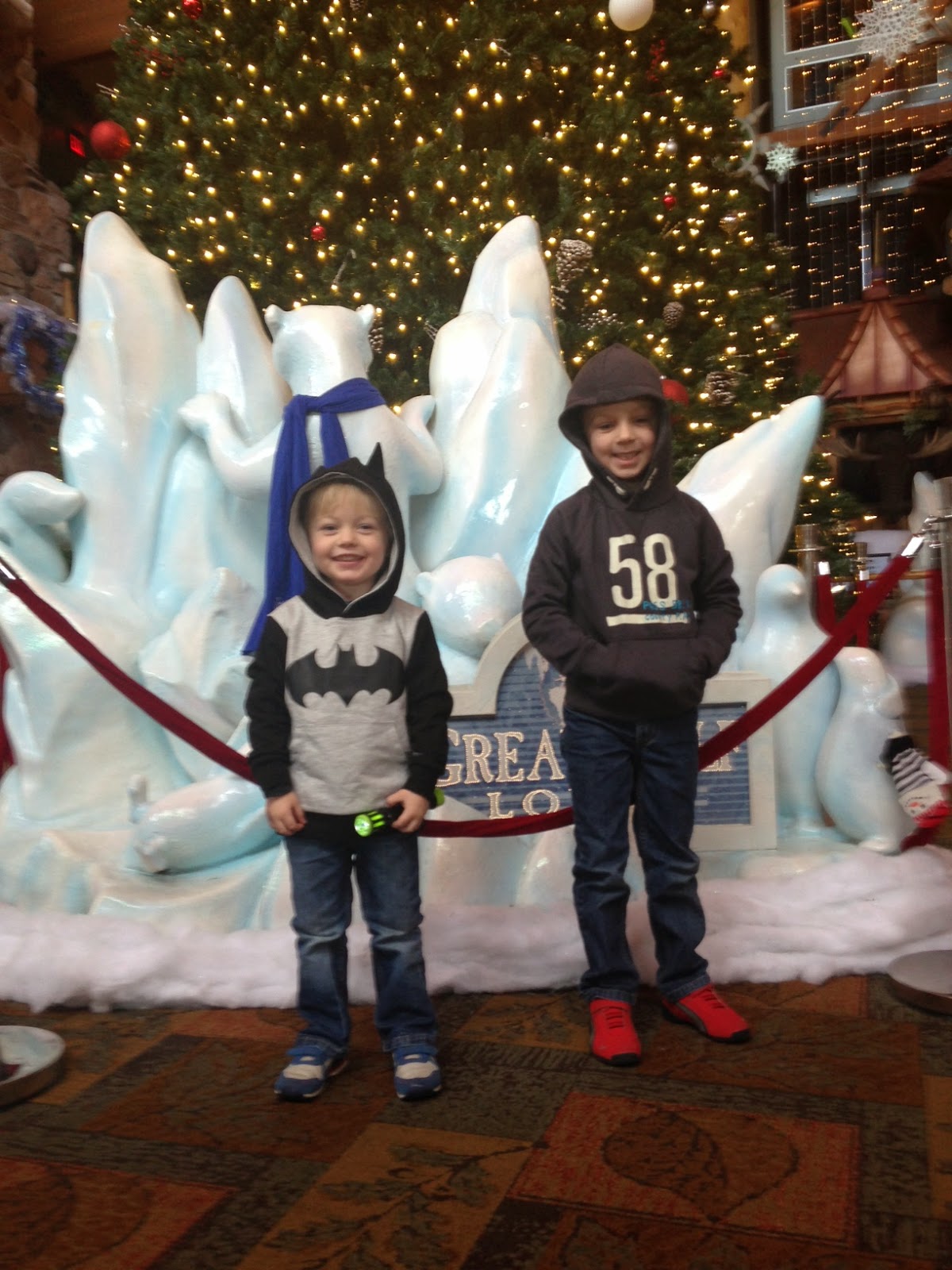 Luckily for us it wasn't all that busy on Christmas Day and they had a room ready to go for us at 1. As we headed to our room we pulled the boys over to see the REAL surprise, the water park. Is that for us? Can we go in there? & then Kaden immediately became worried, what about his swimsuit he asked. No worries, Mommy & Daddy took care of everything.

For the next few hours the boys explored the water park and to my surprise, Logan jumped right in and was floating on his back. Justin and I were both amazed by how brave he was considering he was still a little timid at the end of the summer when it came to swimming and getting his face all wet. 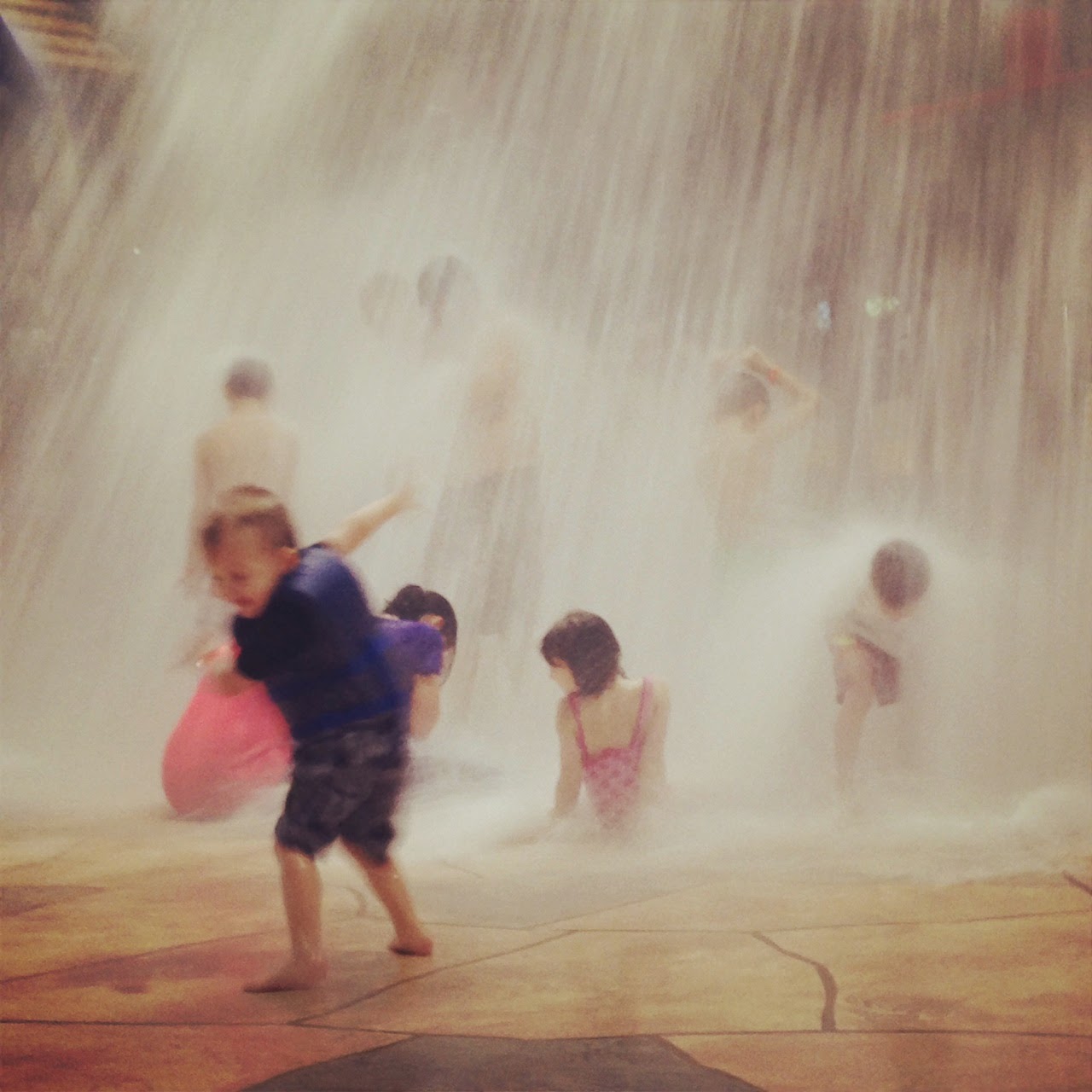 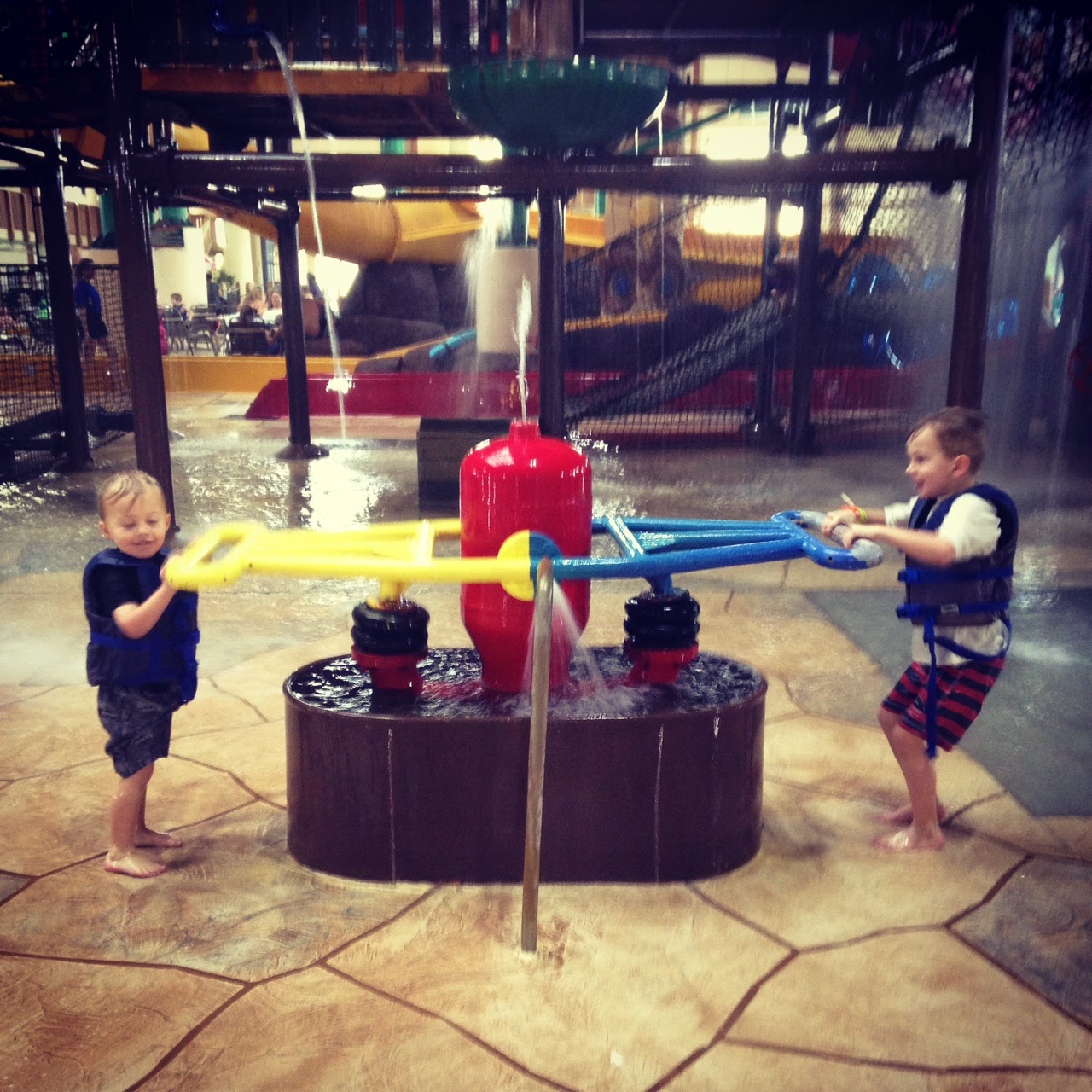 They loved the lazy river and the slides in the kiddie pool but there favorite by far was the 1000 gallons of water being dumped every five minutes. They started out standing on the very edge of where the water would rush and cover your feet like a wave would but after each dump they would gain a little courage and move a little closer. With each step closer Kaden took, Logan was right behind him.


We could tell the boys were starting to get tired and their timing was pretty perfect since someone's kiddo pooped in the kiddie pool closing it down for a few hours so we took this opportunity to explore the hotel & to eat. The arcade was another favorite. 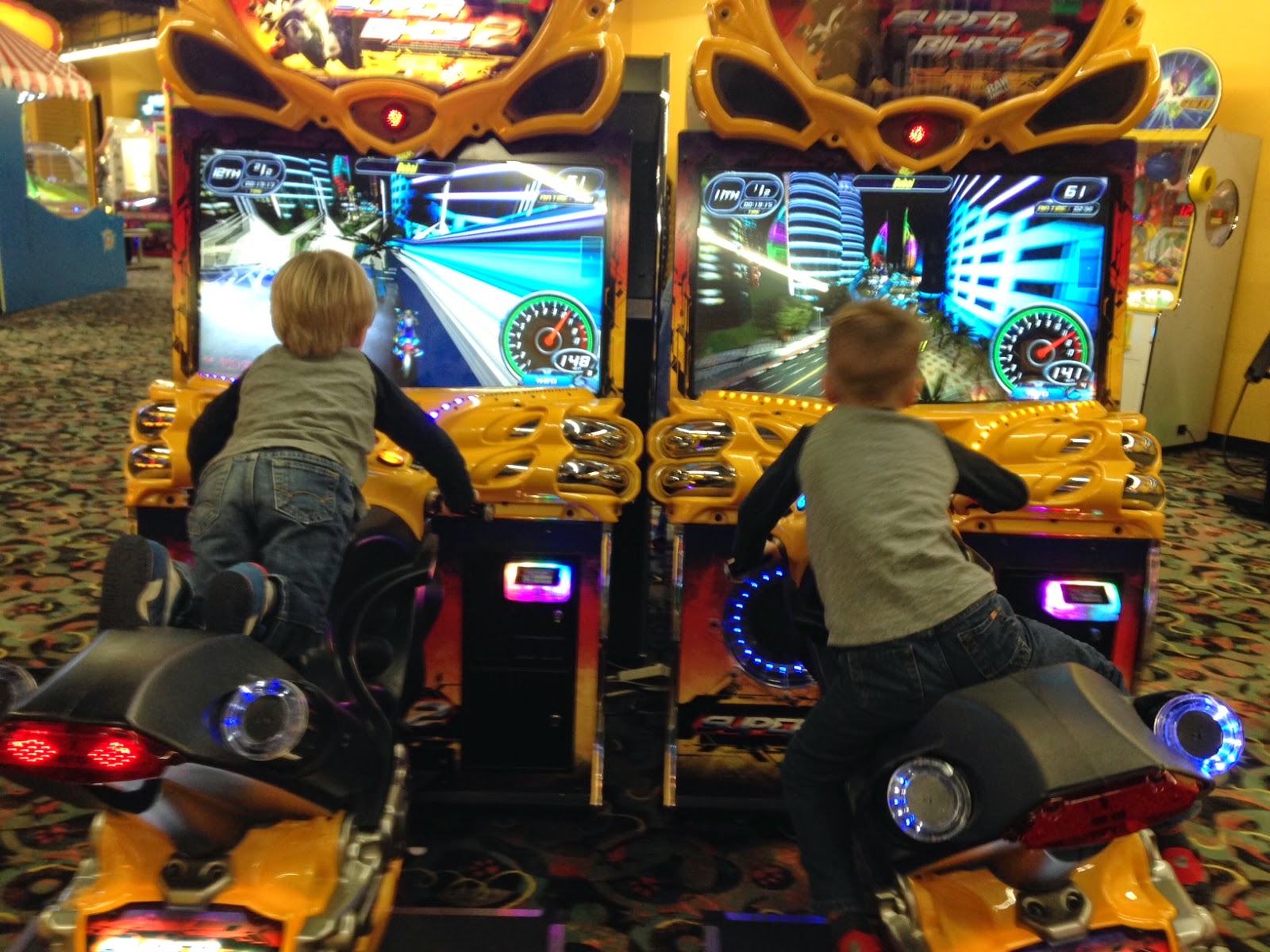 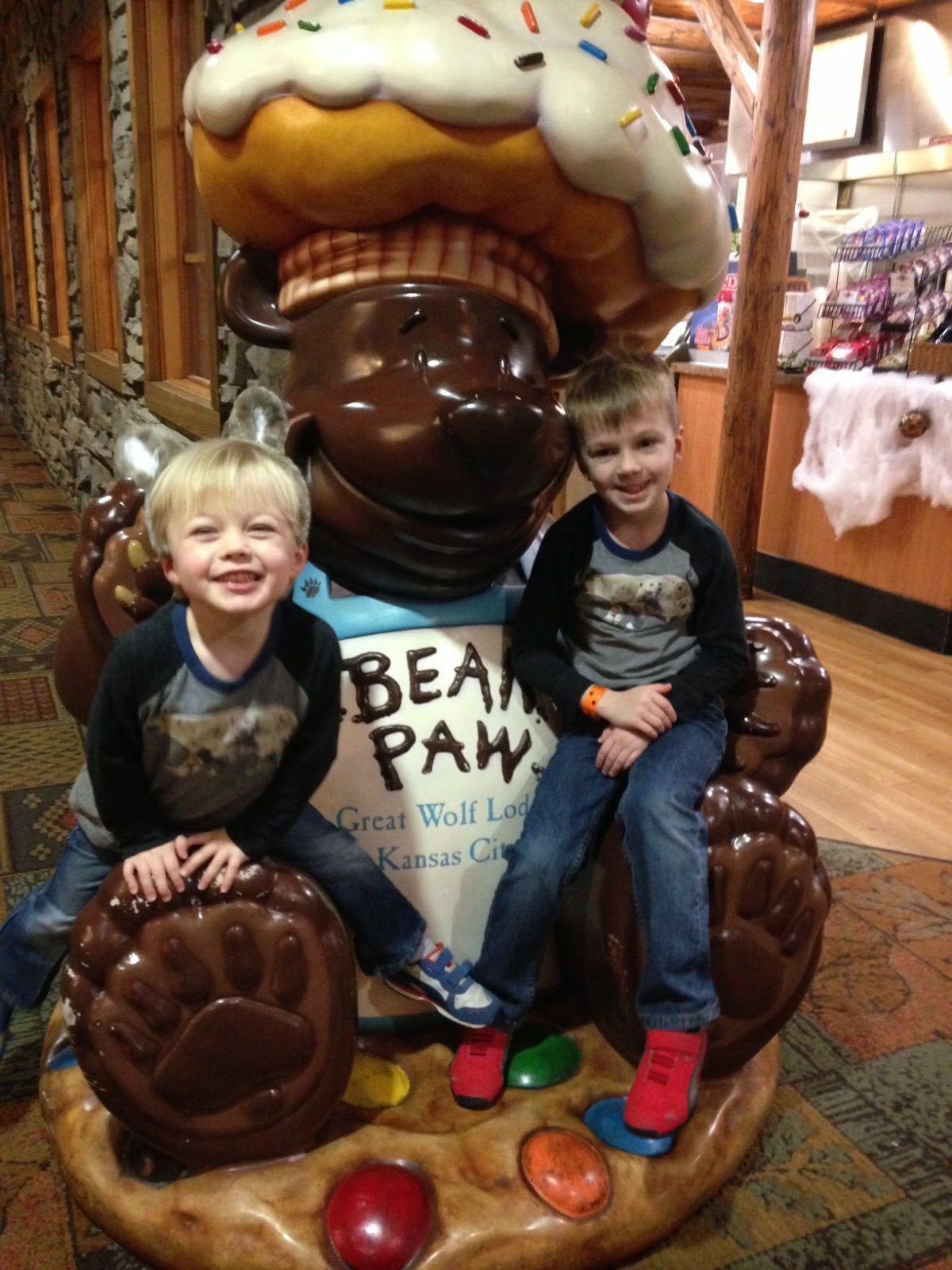 And it came as no surprise that both boys were out like the light when their heads hit their pillows. It had been one amazing morning followed by one amazing water park adventure. 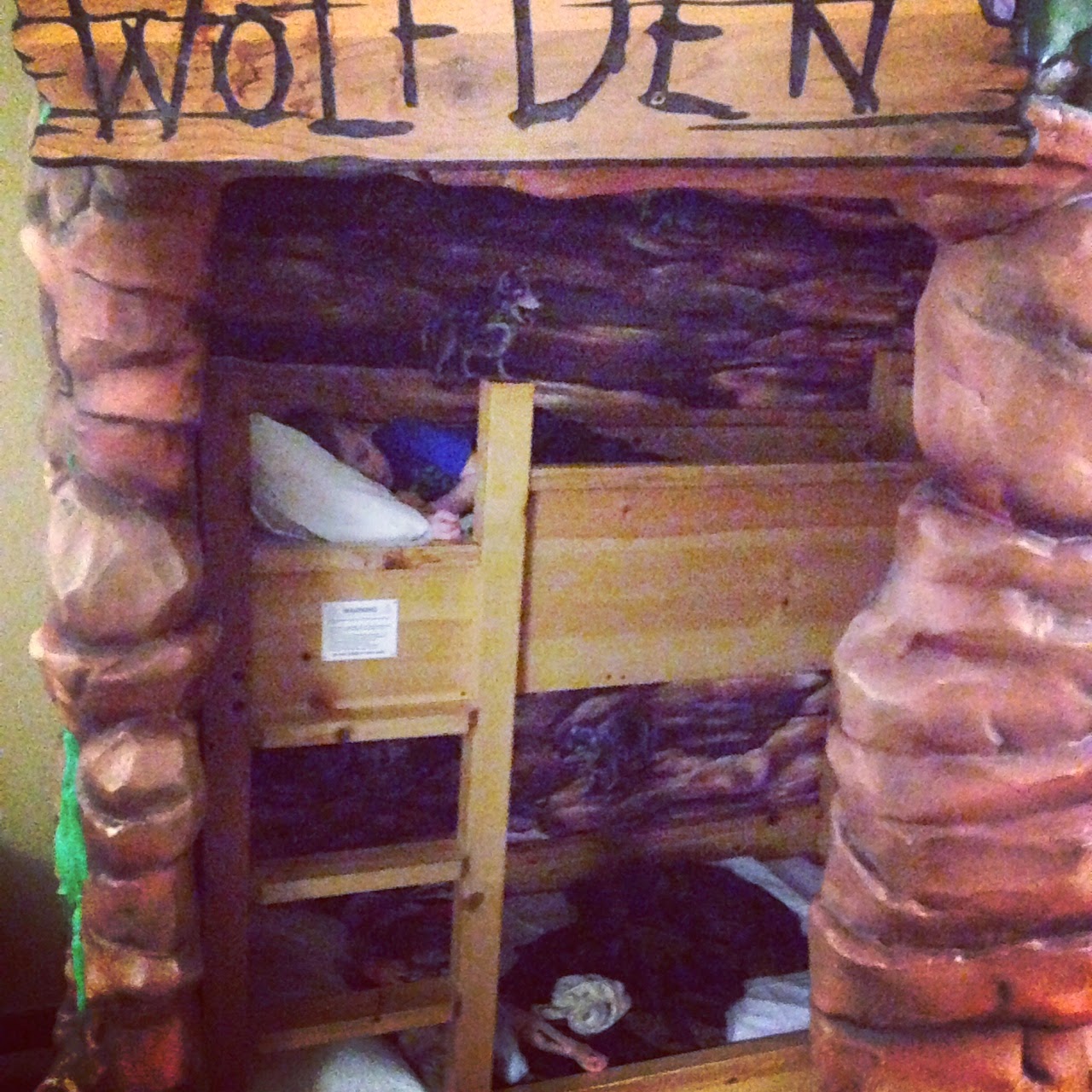 Kaden and Daddy woke up a little earlier than Logan and they decided to head home to let the dogs out and to bring us breakfast. The water park wasn't opening that morning until 9 so Logie and I had a little snuggle time.

But you better believe that at 8:59, the boys were lined up ready to go back to the park. I spent the majority of the morning bribing Kaden to go down one of the bigger slides in the treehouse. I pulled out what I thought was all the stops--$10 dollars, a new NERF gun (he is saving his money for one) for both he and Logan, even asked him what he would like--but no such luck. He wasn't about to go down it, he needed someone he knew to show him it was okay. Maybe next time. Maybe on our upcoming Disney Cruise. 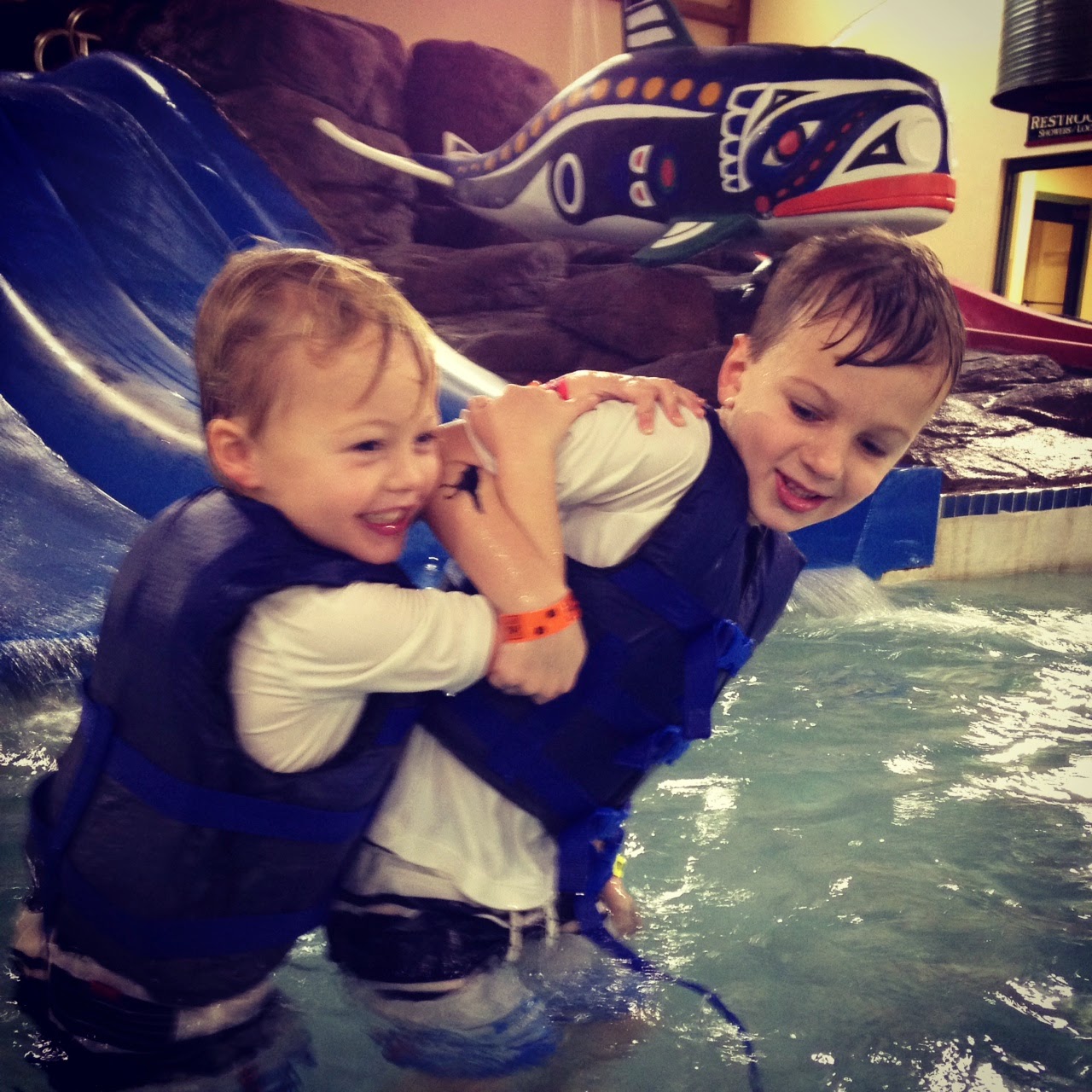 Checkout was at 11 and although we could have stayed all day to use the water park, we were leaving town the next morning and we knew the boys would be just as happy at home playing with their new toys from Christmas morning, after all, they hadn't really gotten to play with them since we left around lunchtime on Christmas Day.

I'll admit, I was a little hesitant on GWL but it turned out to be the perfect way to spend our Christmas afternoon. Just me and my three boys. The boys had perma-grins throughout the entire day--minus one little breakdown from Logan but we chalk that up to sheer exhaustion. I couldn't help but just look at them in amazement and awe, this was my life. Two little boys who couldn't be better friends to one another, who love us unconditionally no matter how "mean" Daddy and I have to be at times. Two little boys who might only be three and five but could teach me more about loving one another than I could teach them. Best. Christmas. Ever. 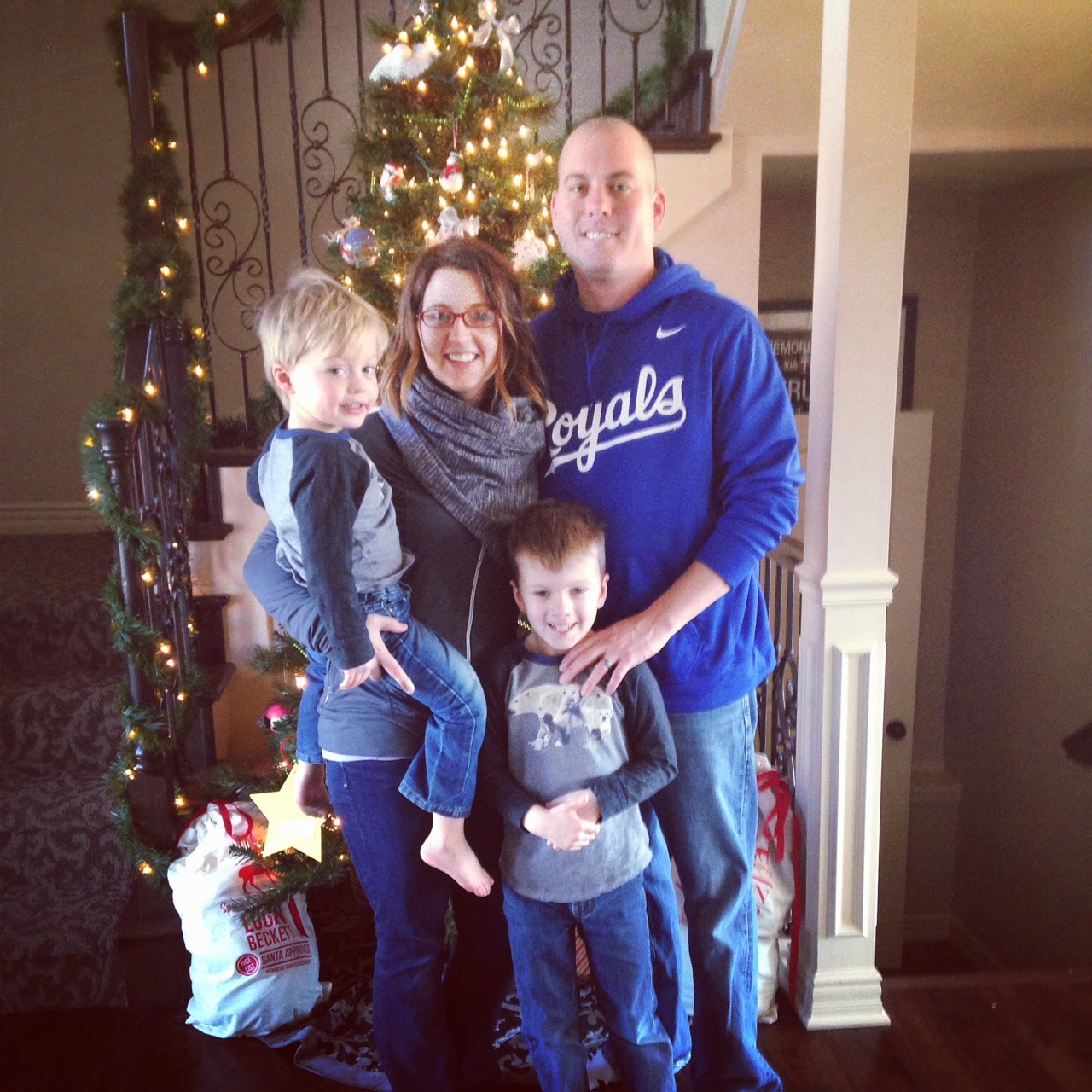 Each year the boys get a new ornament. This is something which I did growing up and wanted to keep the tradition going with my boys. Our tree each year consists of ornaments from my childhood, a new South family ornament & then the kids add one to it each year.  Plus this year Janet gave me a few of Justin's from his childhood & they will get to join the mix next year.  The theme this year was Superheroes & I can see this being a theme for years to come as they are totally obsessed. Kaden's was the Amazing Spiderman--he loves their movies right now. Logan got the Batmobile & it plays the Batman theme song. They each loved being able to play it once before heading off to bed. I loved watching them shake their booty as it played. 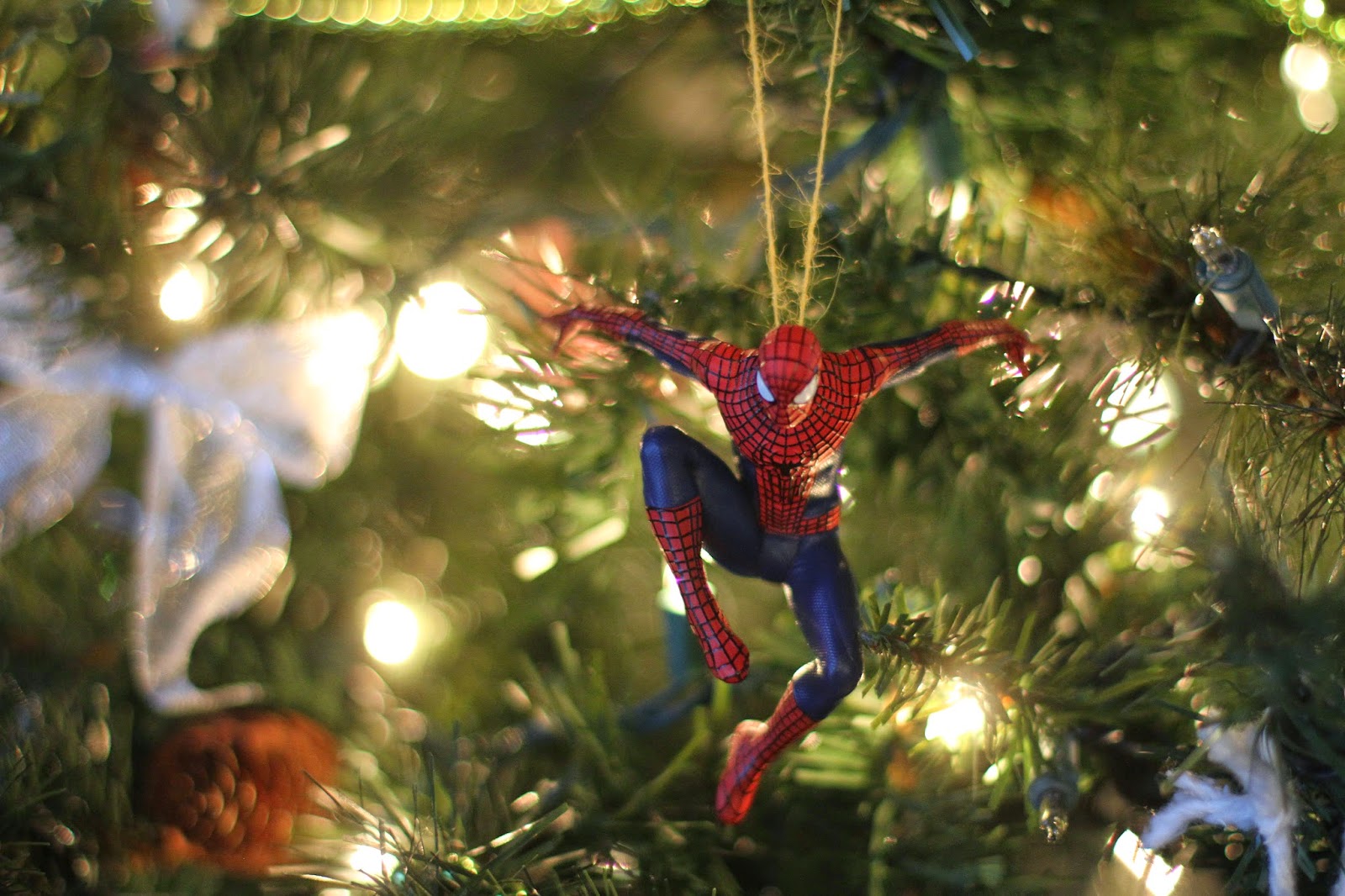 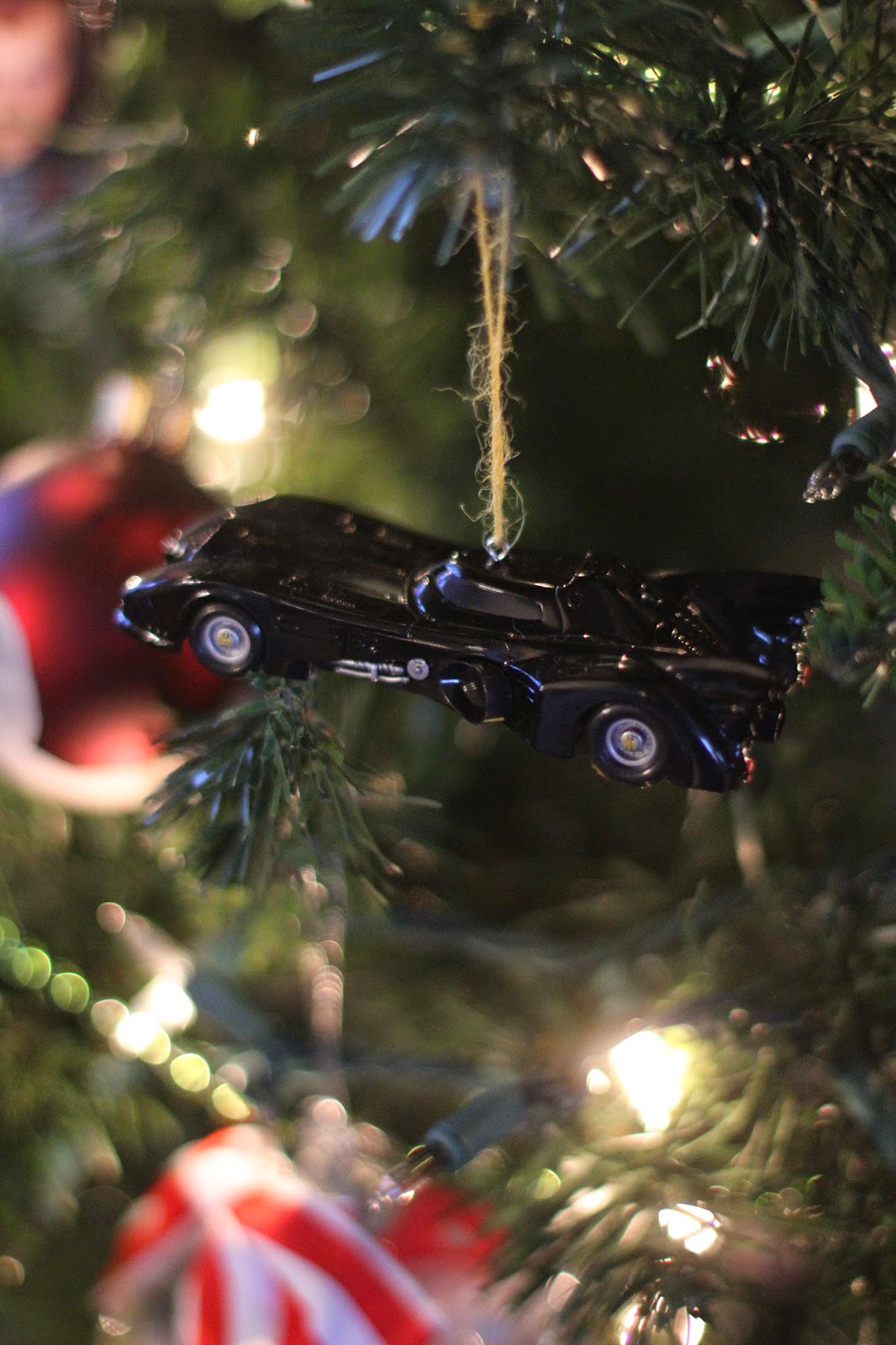