Last year on Christmas Eve we decided to start a new tradition and have a day of baking. The whole South clan gathered at our house and we busted through our recipe line up. We boxed up cookies, fudge & other yummy treats & the boys delivered them to our neighbors. & since we enjoyed it so much we thought we would do it again…

So, of course, during the weeks leading up to our baking extravaganza I pulled a few recipes that I wanted to try. This year we were going to switch things up and not repeat any recipe from last year & it looked a little like this…

At 7:15 two little boys ran downstairs and found Fishlegs with a few specials gifts for them---their Christmas Eve pjs, some hot chocolate & then some Smores. 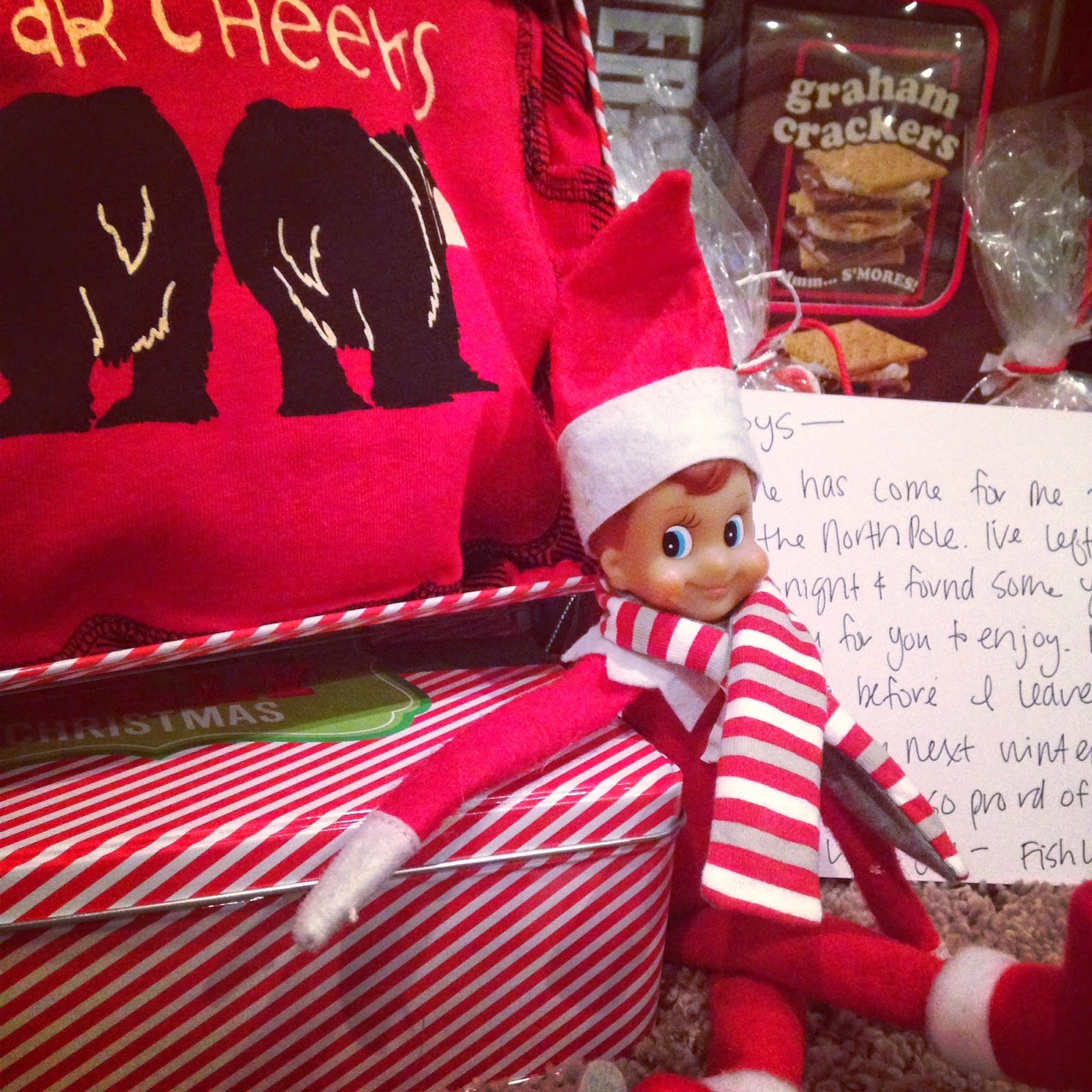 & at 8:06 I received a text from Becky & Colton was sick. Sadly, they were out but the baking had to go on without them as I had yummy treats to deliver to our neighbors.

I figured that I would go ahead and mix the Oreo balls together and form them into balls and toss them in the freezer before Janet arrived so we could move onto the next cookie. You see, I had a plan. I wanted to be efficient as possible. Be baking a round of cookies as we prepare the next round of cookies. Have the measuring bowls, cups & utensils washed and dried as we went so we wouldn't have to be waiting on anything. & although I could have used my hands to break up the Oreos, the directions suggested a food processor & I'd have been silly not to use ours so I pulled it down. The boys tossed the Oreos in. I ground them up. We added the cream cheese. I mixed them together. & then I pulled the blade out and took it over to the sink to wash it. 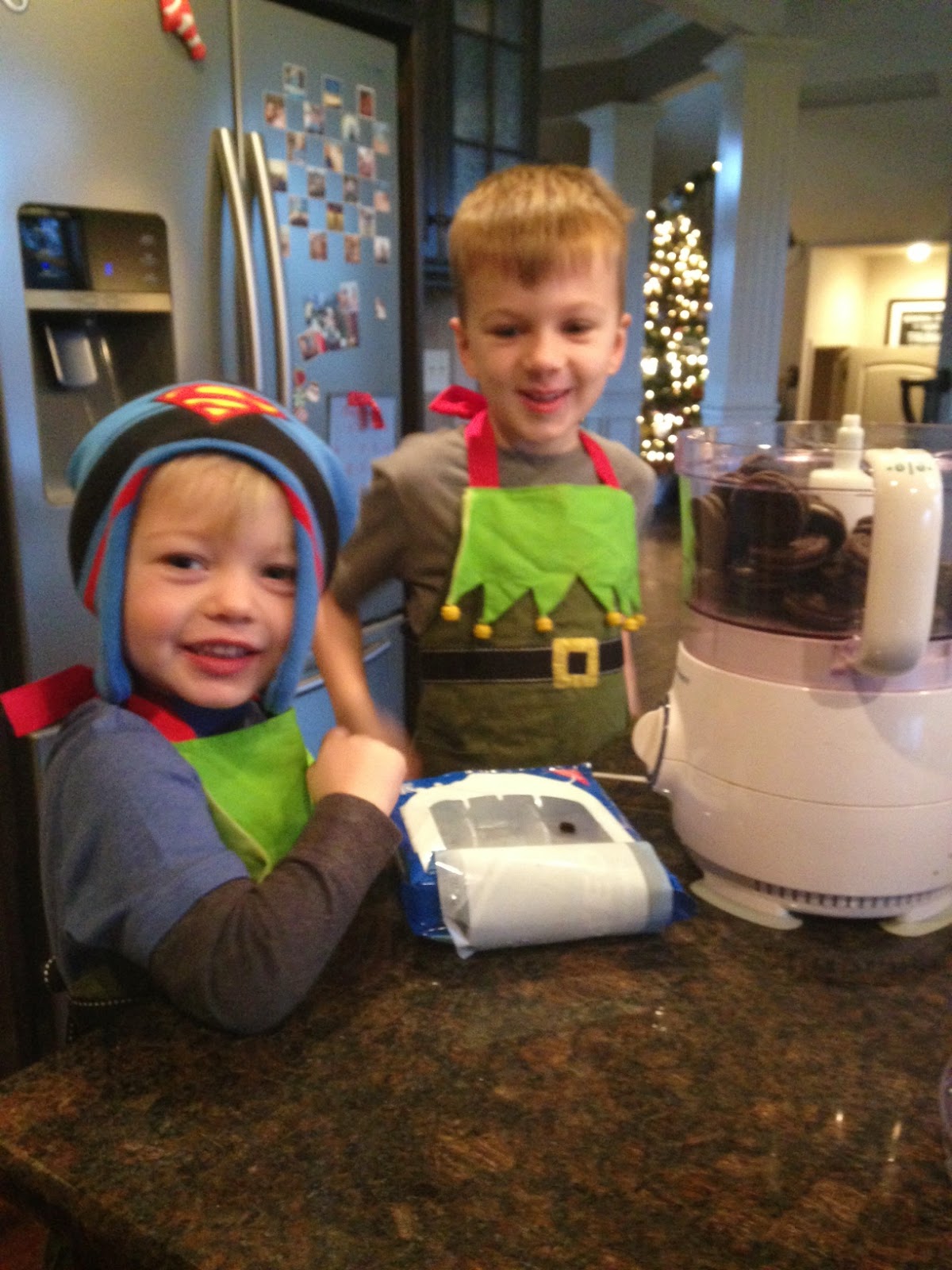 & at 9:02 I sliced my right index finger & things were on hold. Justin was at work. Janet was on her way, I'd apply pressure try to get it to stop bleeding & have Janet give me her opinion when she arrived. 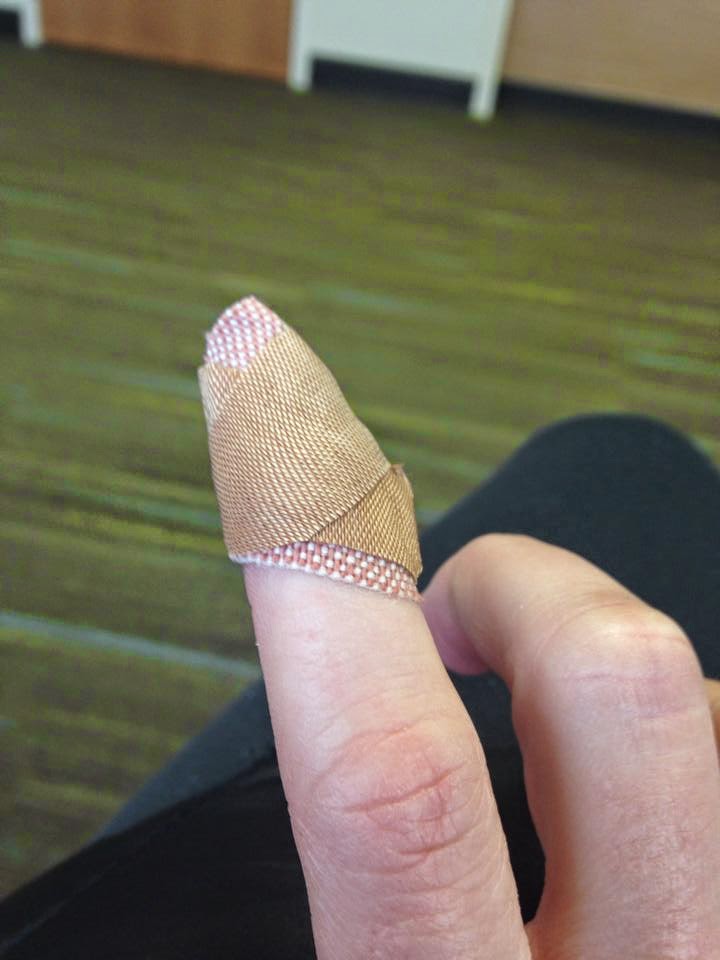 By 11:30 I had three stitches & I was back to baking. Like I said, nothing was going keep us from delivering our goodies to our neighbors.

Luckily, I had made the Cake Batter Chocolate Chip Cookies the night before since they needed to chill for a couple hours. & have no fear, I didn't bake without wearing two sets of gloves once I returned. We plowed through the Christmas Crunch and Reeses Peanut Butter Cookies. We scratched the Hot Chocolate and Marshmallow cookies since I only had limited time before my finger started throbbing again & they were probably the most time consuming. Kaden and Grammy worked on dipping the Peanut Butter Balls while Logan and I worked on the Melted Snowmen. As we allowed the Melted Snowmen to harden we cleaned up--I stayed away from anything and everything that remotely resembled a blade. & then we finished things up by adding the face to our snowmen. 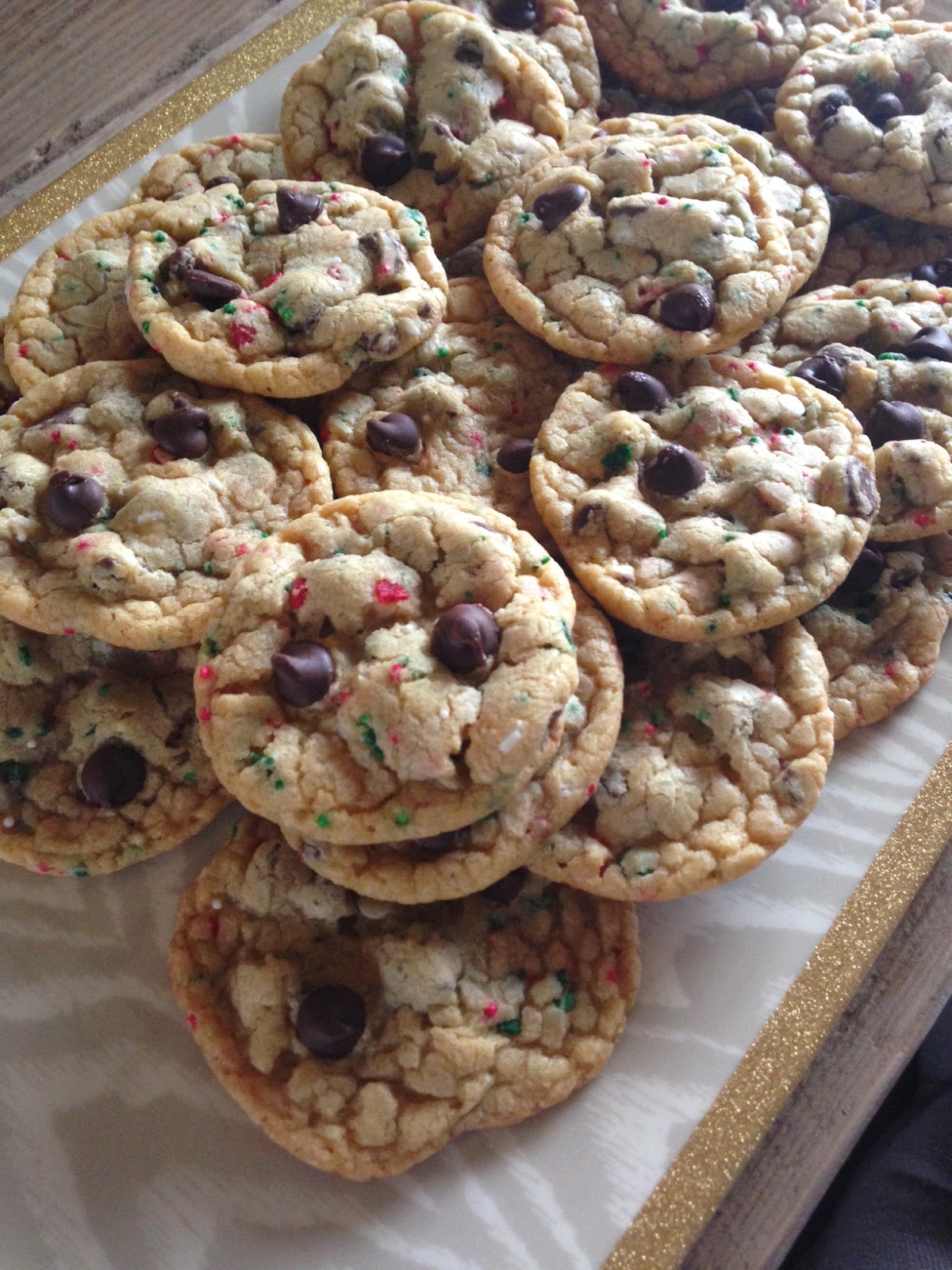 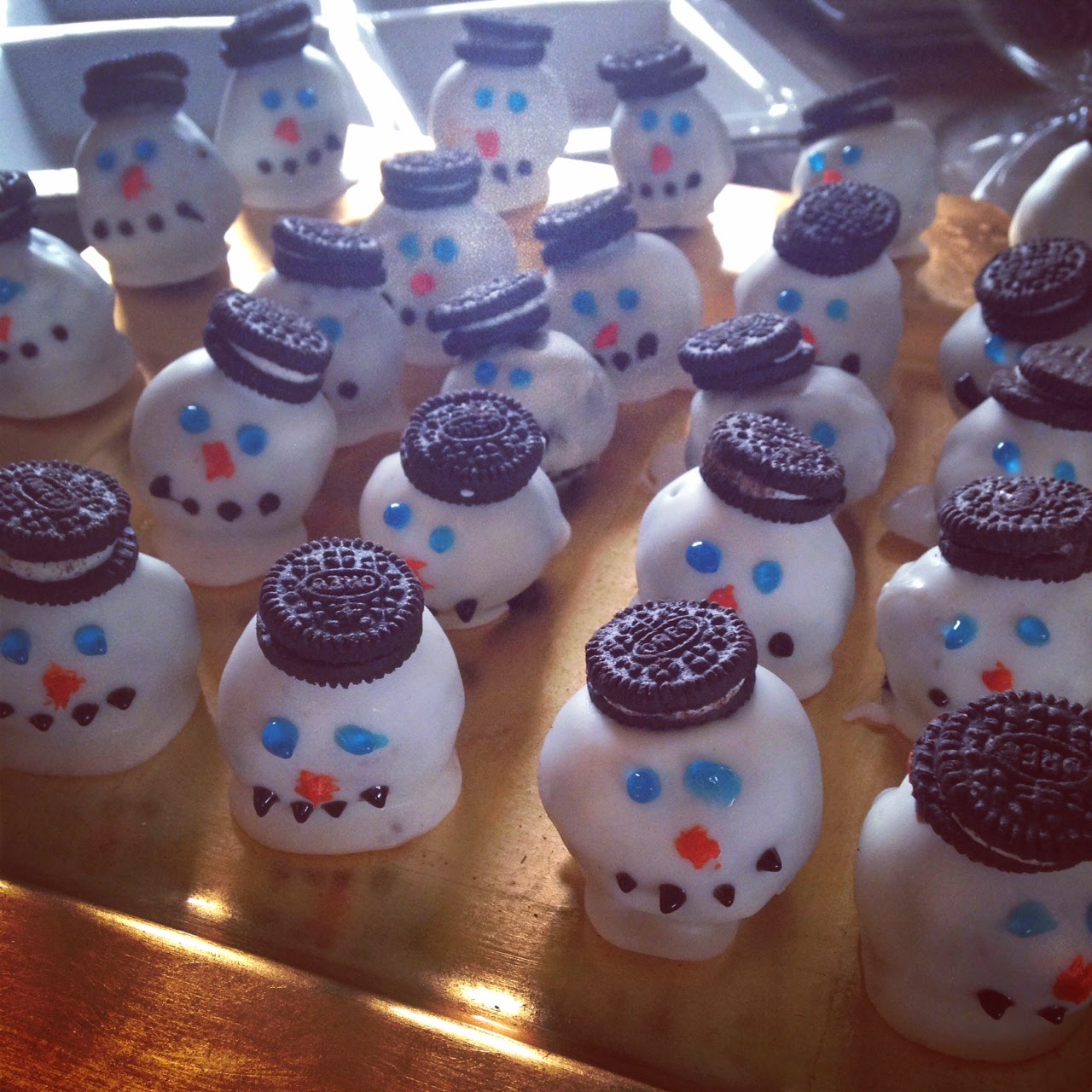 We finished just in time for the boys to lay down and rest before having to get up and get ready for 3:30 Christmas Eve service. & it was a beautiful service---Our High Priest. Our Prophet. Our King. 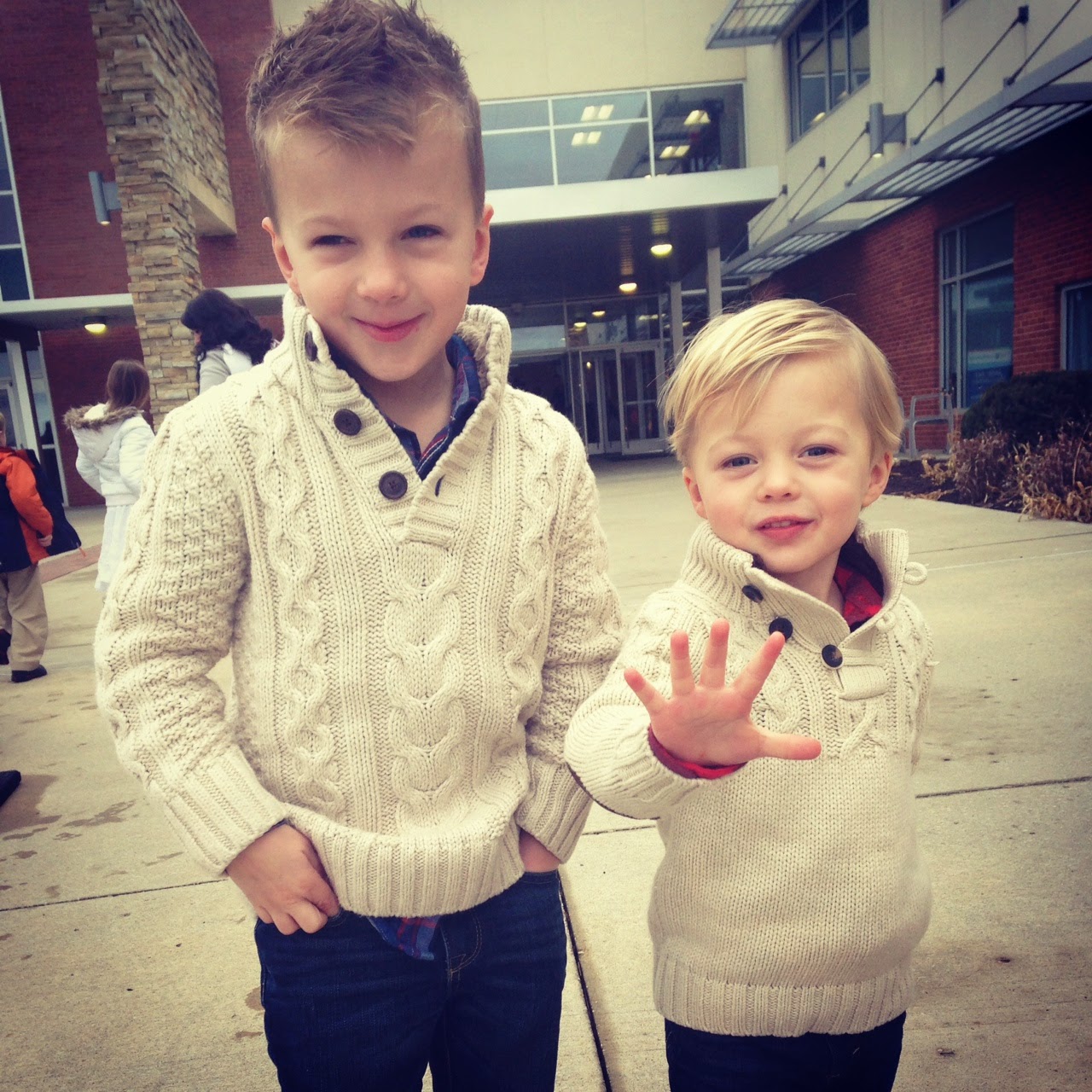 As soon as we walked through the door the boys were in their pjs. Are these not the cutest pjs you have ever seen? & the flapjack, it's real. 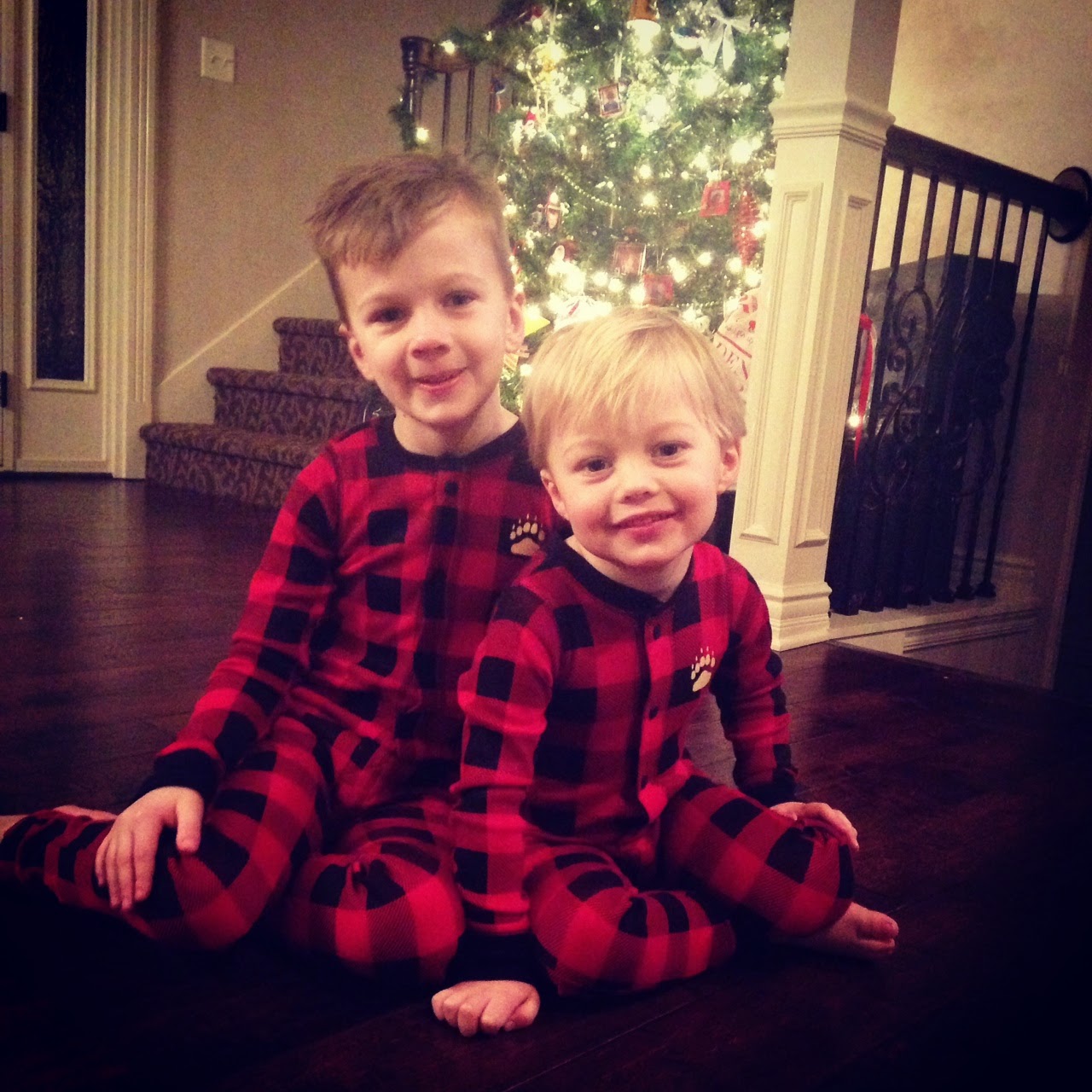 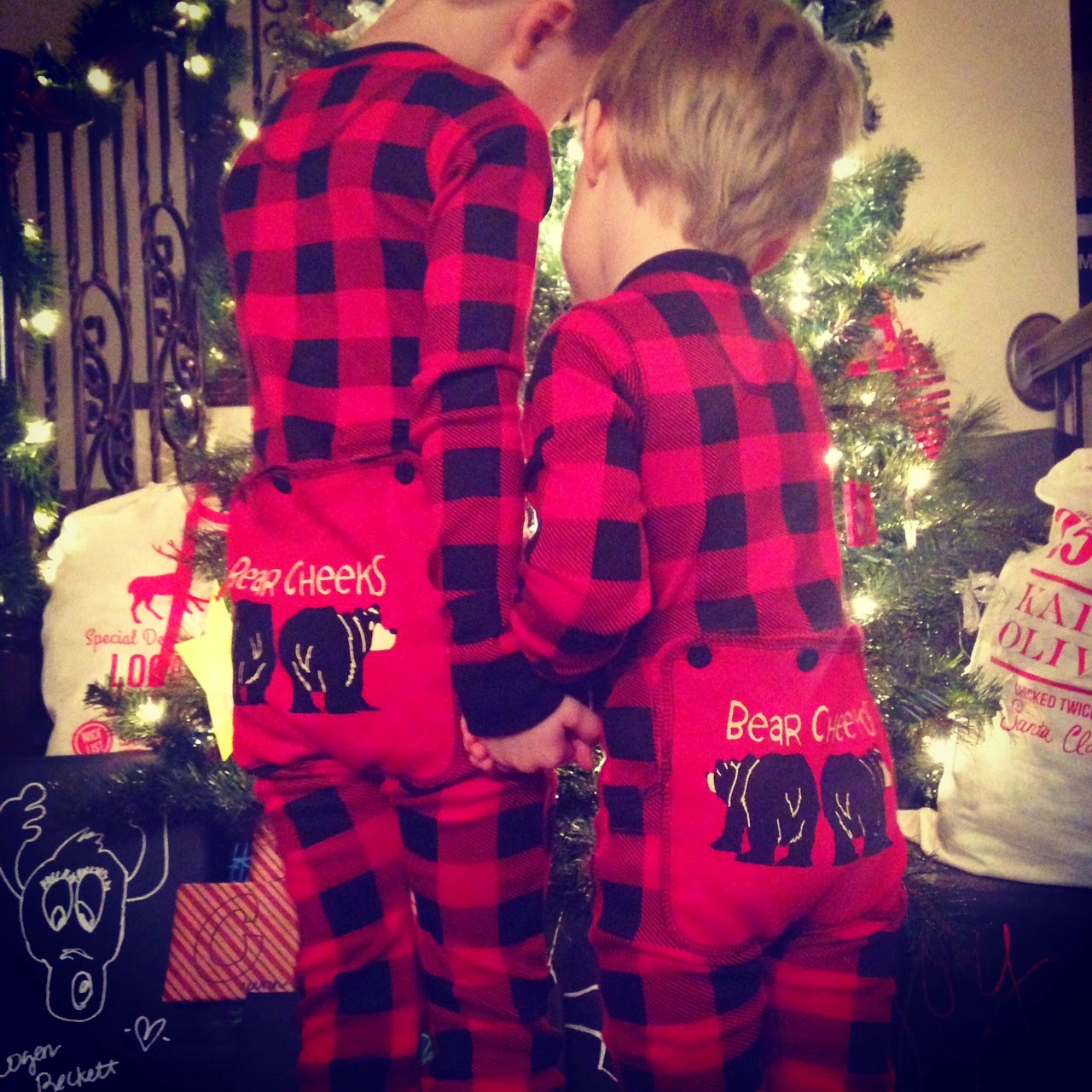 Before they rushed off to bed we got the milk and cookies ready for Santa & we said our farewell to Fishlegs. The boys went right up to bed and we didn't hear another peep--they knew that Santa wouldn't come until they were fast asleep or at least that is what we told them.

After they went off to bed Justin and I got to work. I filled their stockings & brought down their gifts which Santa had left at the front door… 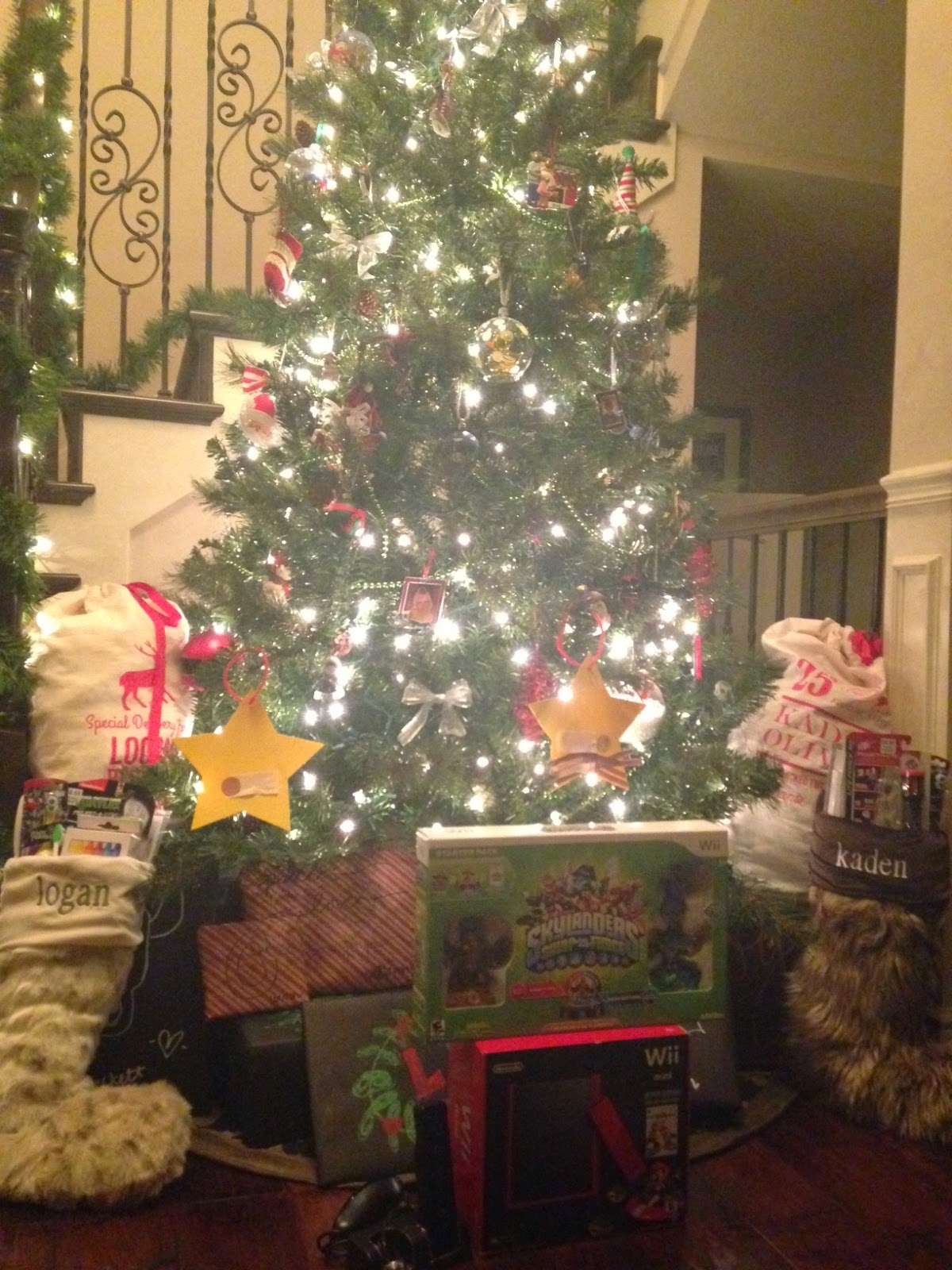 Since we would be hosting brunch at our house the following morning and knowing that my boys would be up bright and early we figured that we should have something ready to go for them after they were done opening gifts to hold them over. I had the bright idea of making a fruit butter braid. Growing up we use to have these all the time. I remember the white package they came in and how you would have to set them out overnight to thaw out and to rise. & how the following morning the house would fill with an amazing aroma & my tummy would smile.

I wanted that feeling again. So we got to work. Justin made the dough & the cream cheese filling as I got to making the braid. & although this may look like it was difficult, it wasn't. In fact, we have since made another batch and instead of making one large braid, we made two smaller ones. One to eat and one to freeze, you know for later. 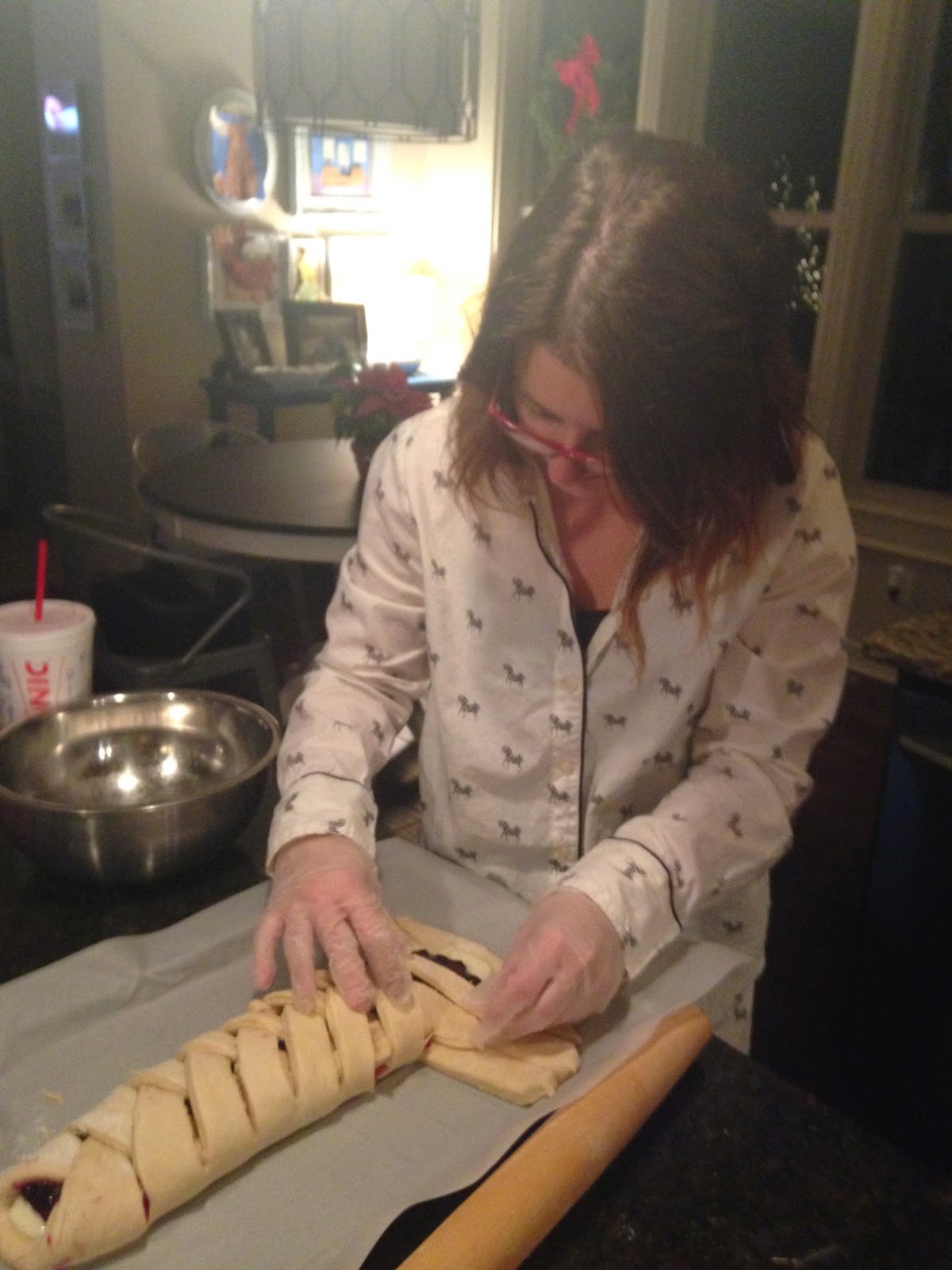 Basically, you roll out the dough. Use a pizza cutter to cut strips on both sides leaving about two inches of uncut dough in the middle. You add the cream cheese filling and then on top of that your favorite pie filling--we went with blueberry. You bake the following morning and this is what you get, a little slice of heaven. 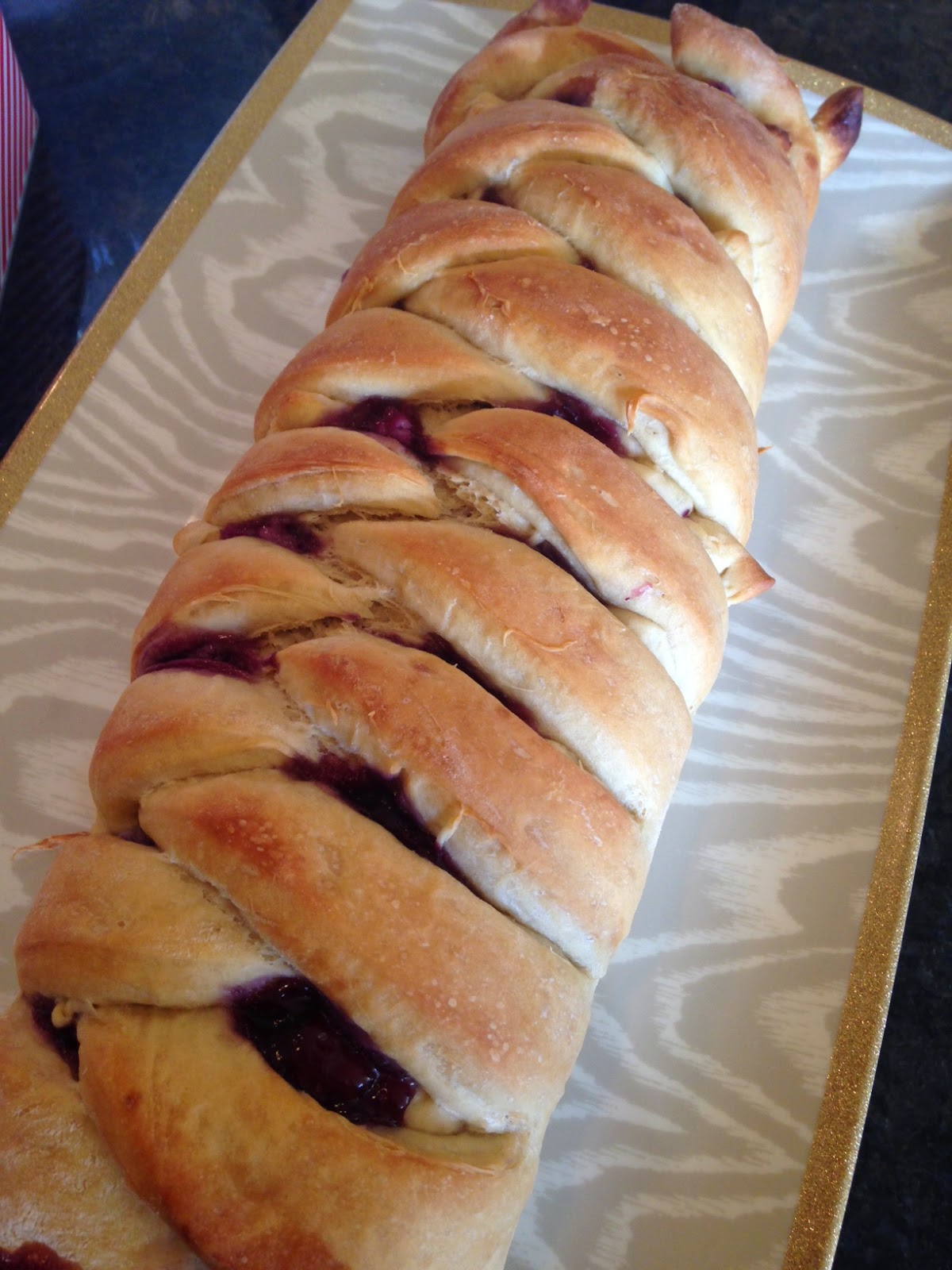 The boys have fallen in love with them just as I did when I was young. & although the day started off with a little mishap---well, not so little---Christmas was looking like it was going to be the best one yet.
Posted by Kayla South at 7:55 PM