A few weeks back we had Kaden's 5 year old checkup. I wasn't looking forward to this checkup as I knew he would be receiving a round of shots. How many? I wasn't quiet sure, just knew he was due.

I'm one of those people who likes to watch every second of a shot being administered or blood being drawn. I like to know when the needles is going in and when it is coming out. I don't like surprises. So I figured it might be best to talk about the shots leading up to the appointment versus letting them spring it on him. We talked about how they would probably be in his leg, that they would only hurt for a second and that we could go for ice cream after. & at the last minute I threw in that we could go to Ikea and get his new bunk bed. We were already planning on getting the bunk beds so I just used it as another carrot for good behavior while we were getting his shots. & I know what you are thinking, now he will expect something big after every shot. NOPE. I made it clear that this was a ONE time ONLY thing and that is was only for FIVE year old shots. & it worked because a week later he had to get a flu shot and he didn't ask for anything besides the sucker the nurse gave him!

Anyways, for the most part the checkup went off without a hitch.

The hitch, well it came with his eye exam. We aren't sure if he just wasn't into doing the exam or if he was really having a hard time so we have decided to just go ahead and see a pediatric ophthalmologist just to be sure.

He took his shots like a champ, only a few tears and then we were on our way to Ikea. We made it in and out with in 20 minutes and had his new bed in hand. 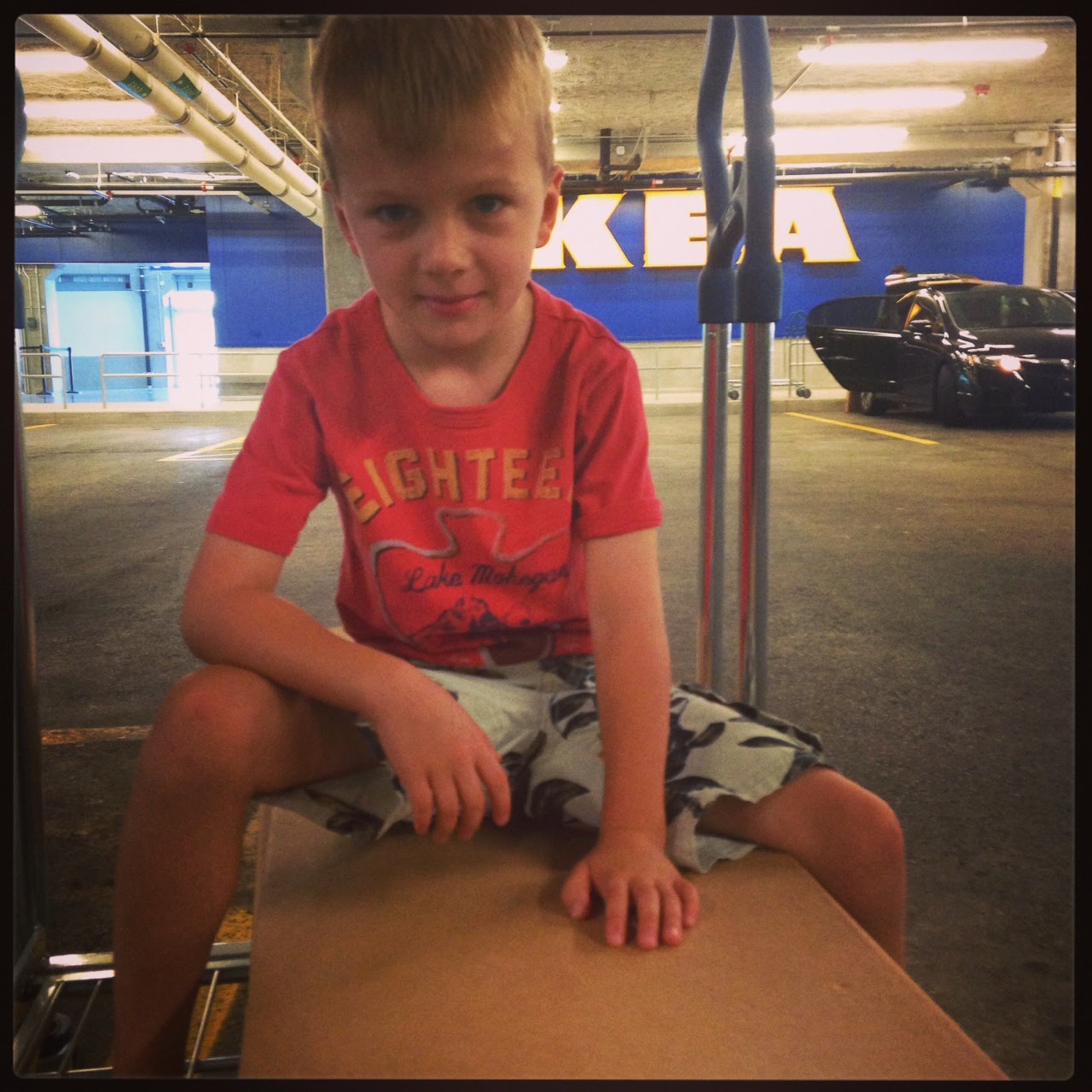 The kids were a little disappointed when I explained that we wouldn't be putting the bed together just yet, that I had to do a little painting before it was actually time to build it. And over the next week and half I painted as they rode their bikes and cheered on the Royals to yet another victory. 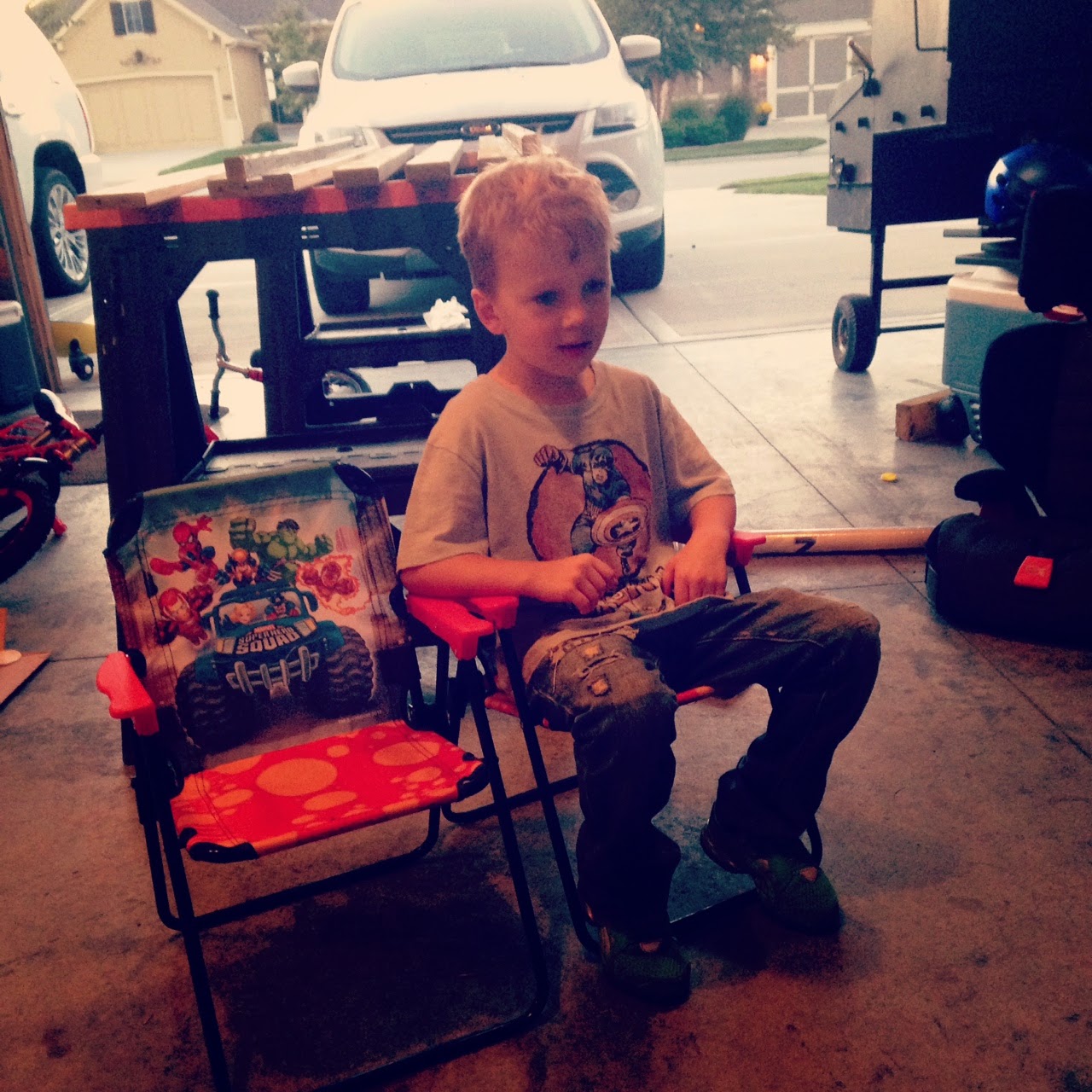 & I won't lie, this wasn't an easy task--it was a very time consuming task as I only had two sawhorses and had to keep rotating pieces of wood for painting. In all, I think we painted about 45 pieces not once but twice. 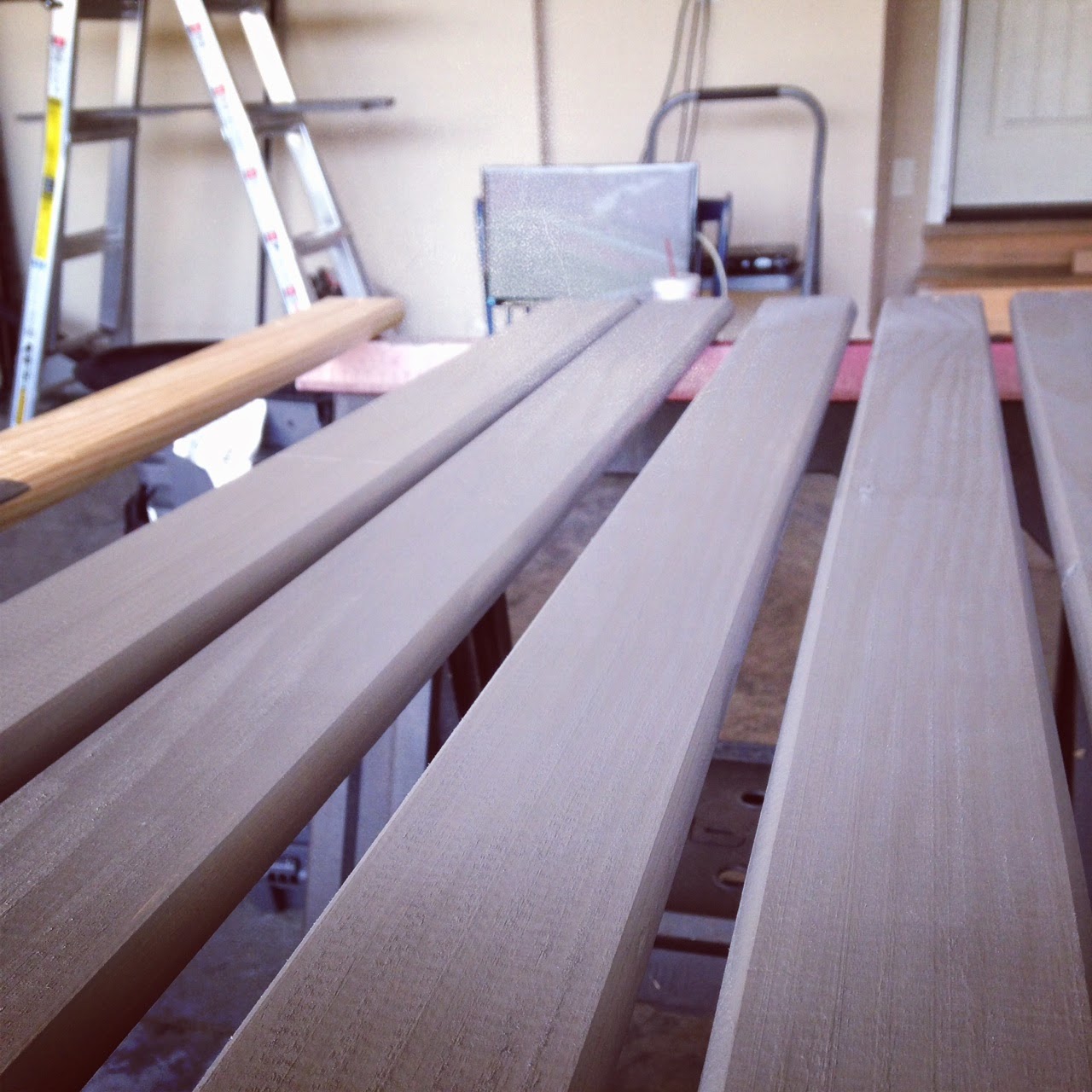 Sunday afternoon I started putting the bed together. 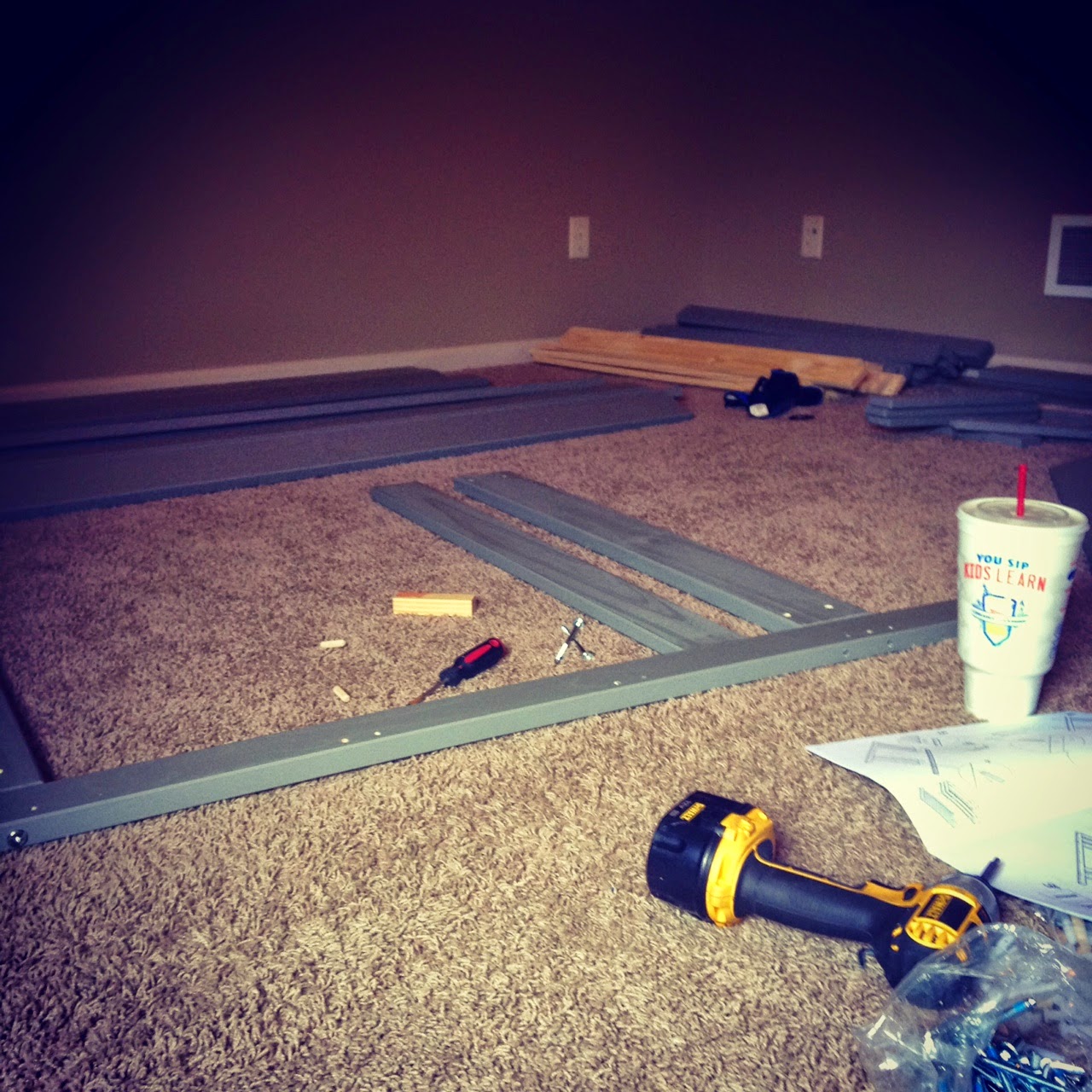 After taking a break and having dinner, Justin and I went back to work and finished it up. The boys were so stoked, UNTIL I told them there was NO sleeping on the bed until we had two mattresses. BUMMER. 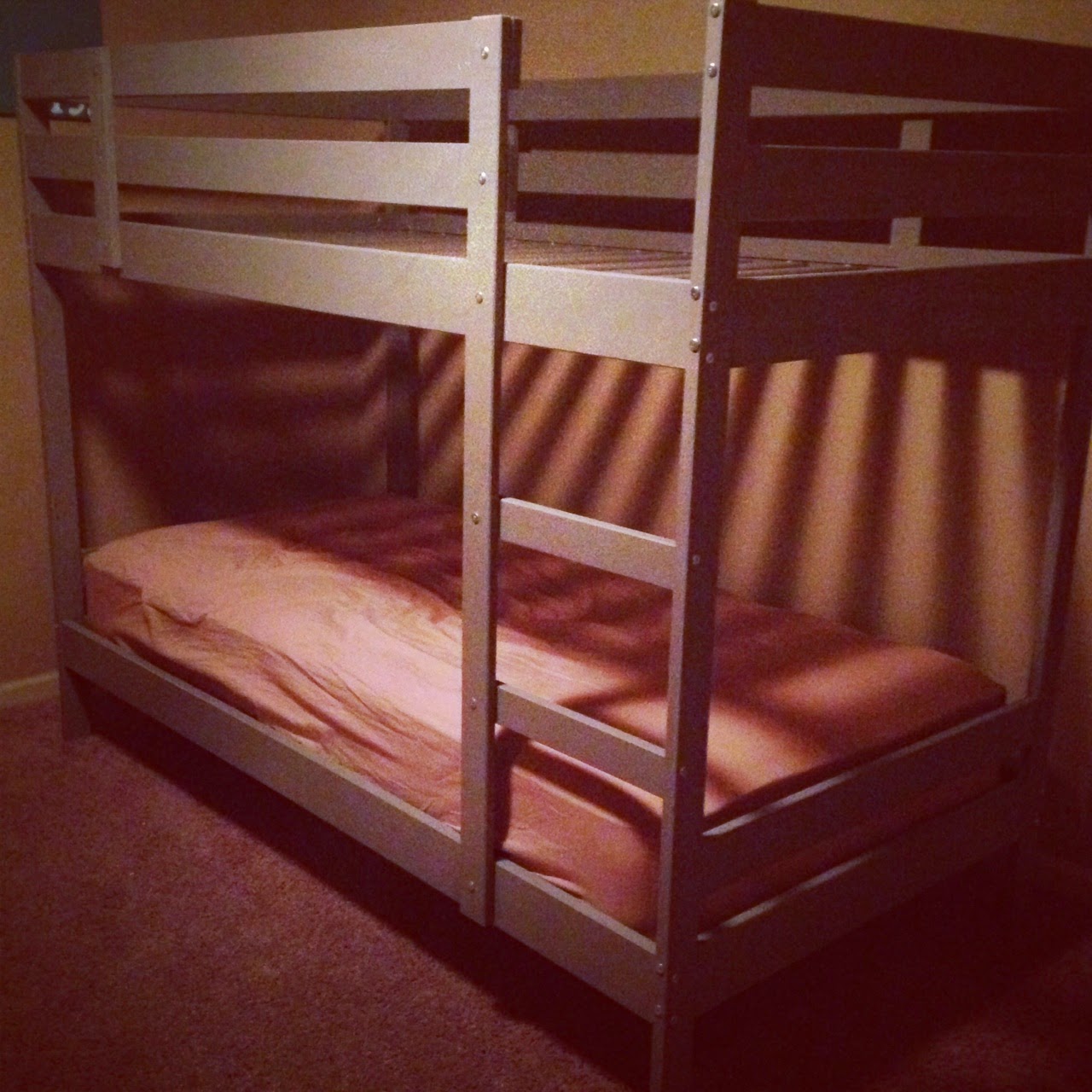 So that is where we are at. 5 year old shots & a new bunk bed. I have since added a cute end table and shelving unit to the room but still have so much to do to complete the makeover but it will happen in due time. & I think if you ask Kaden, he'll say getting the shots was a pretty small price to pay for his work-in-progress-cool new room.