Over the last few baseball seasons the men in my life, my dad and husband, have both made declarations of "THIS IS OUR YEAR" for the Royals. & each year, we have fallen a little short, that is until this year & THIS IS definitely OUR YEAR!

One of Justin and I's favorite pastimes is attending games of our Boys in Blue. When I was pregnant with Kaden we were season ticket holders---the 21 game package. And although we haven't purchased any packages since, we have certainly attended our fair share of games each year. This year we may just be into double digits but that's only because of recent games. We figured out fairly quickly that we weren't bringing the best of luck for our Royals and vowed to stay away until the bad luck wore off.

We went opening weekend for Justin's birthday with his Mom & his brother's family. 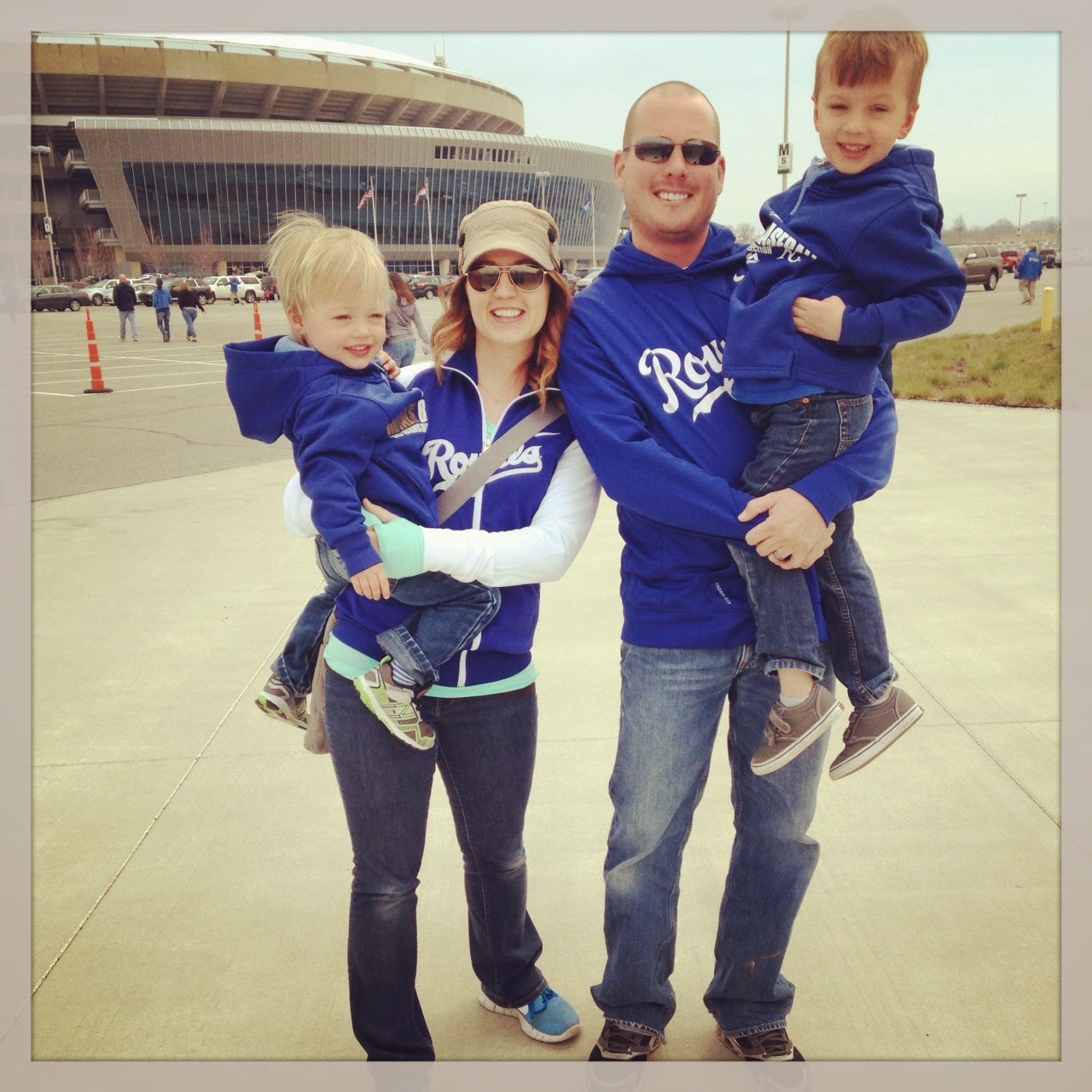 We went a few nights later with the boys. 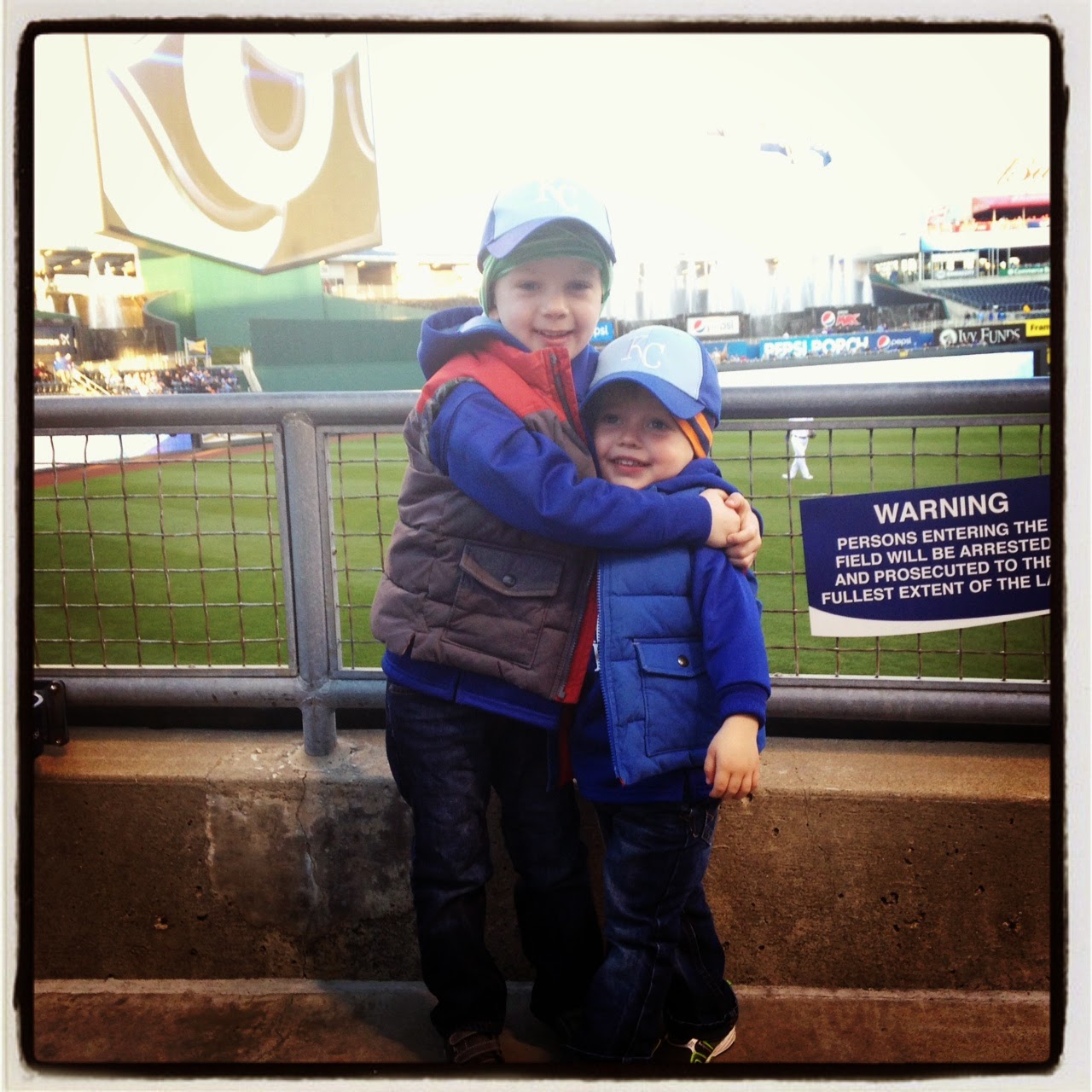 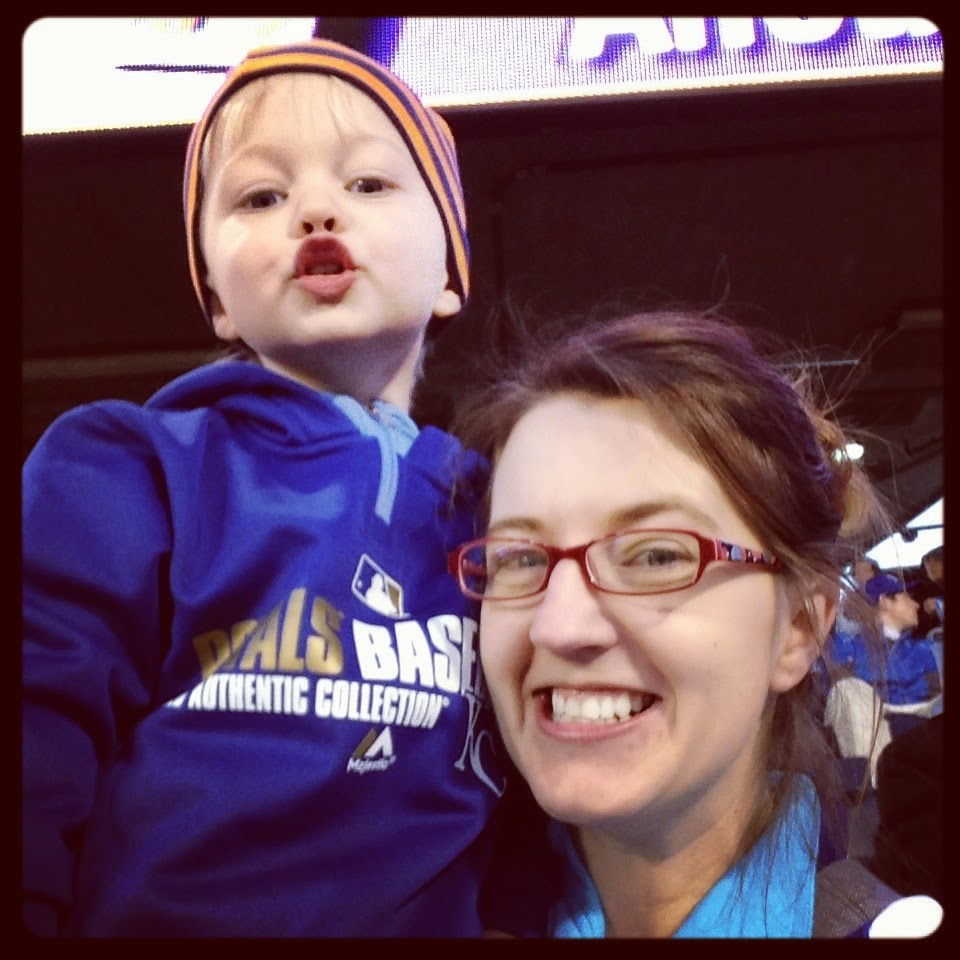 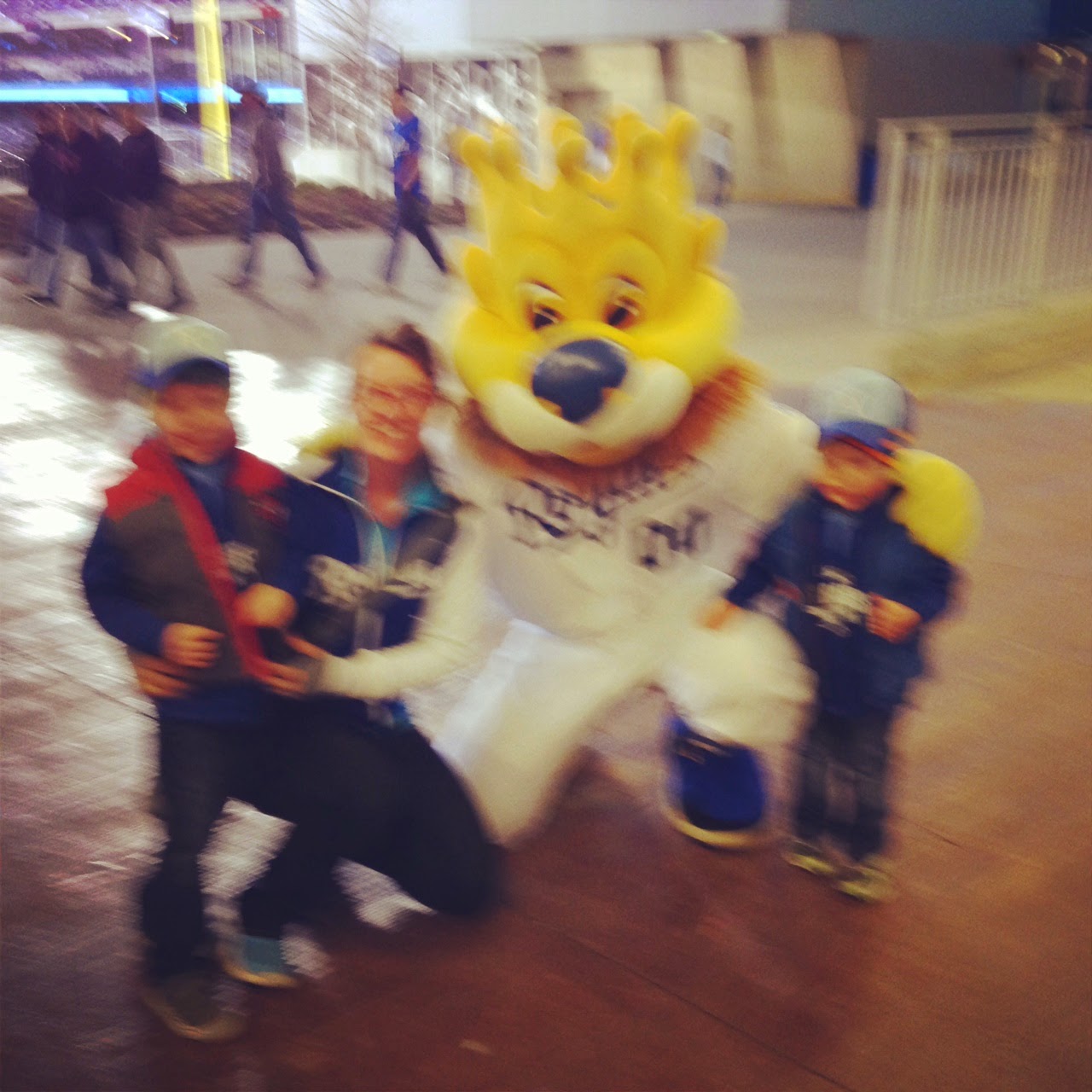 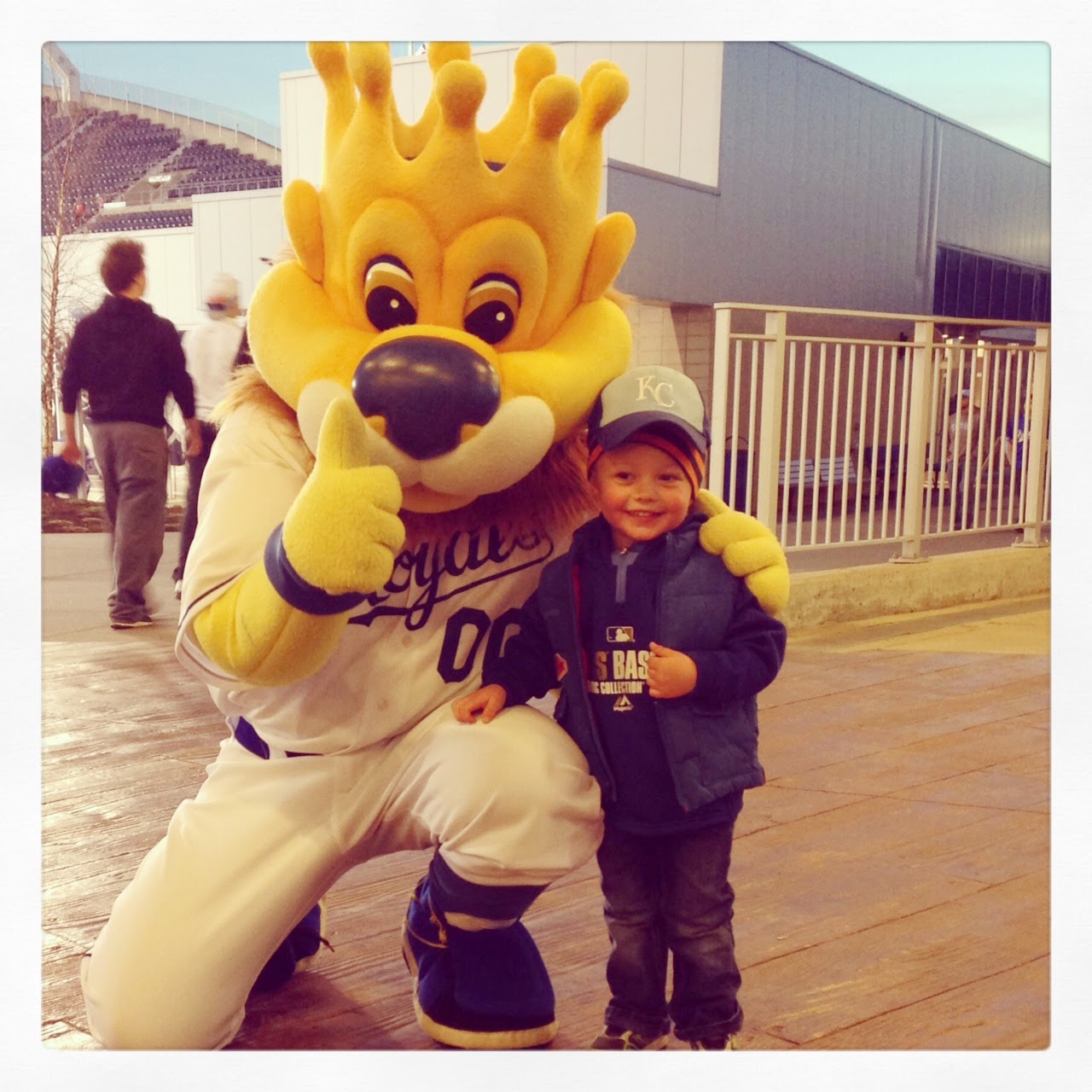 We went on Easter. 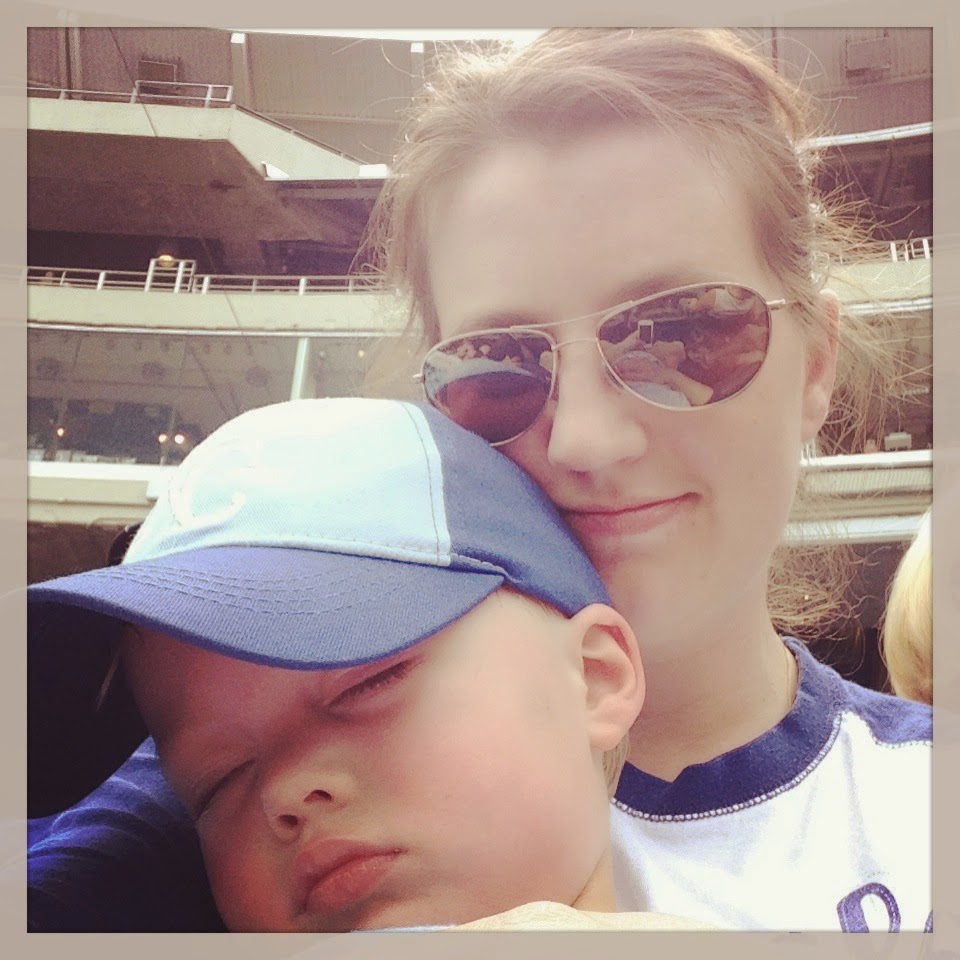 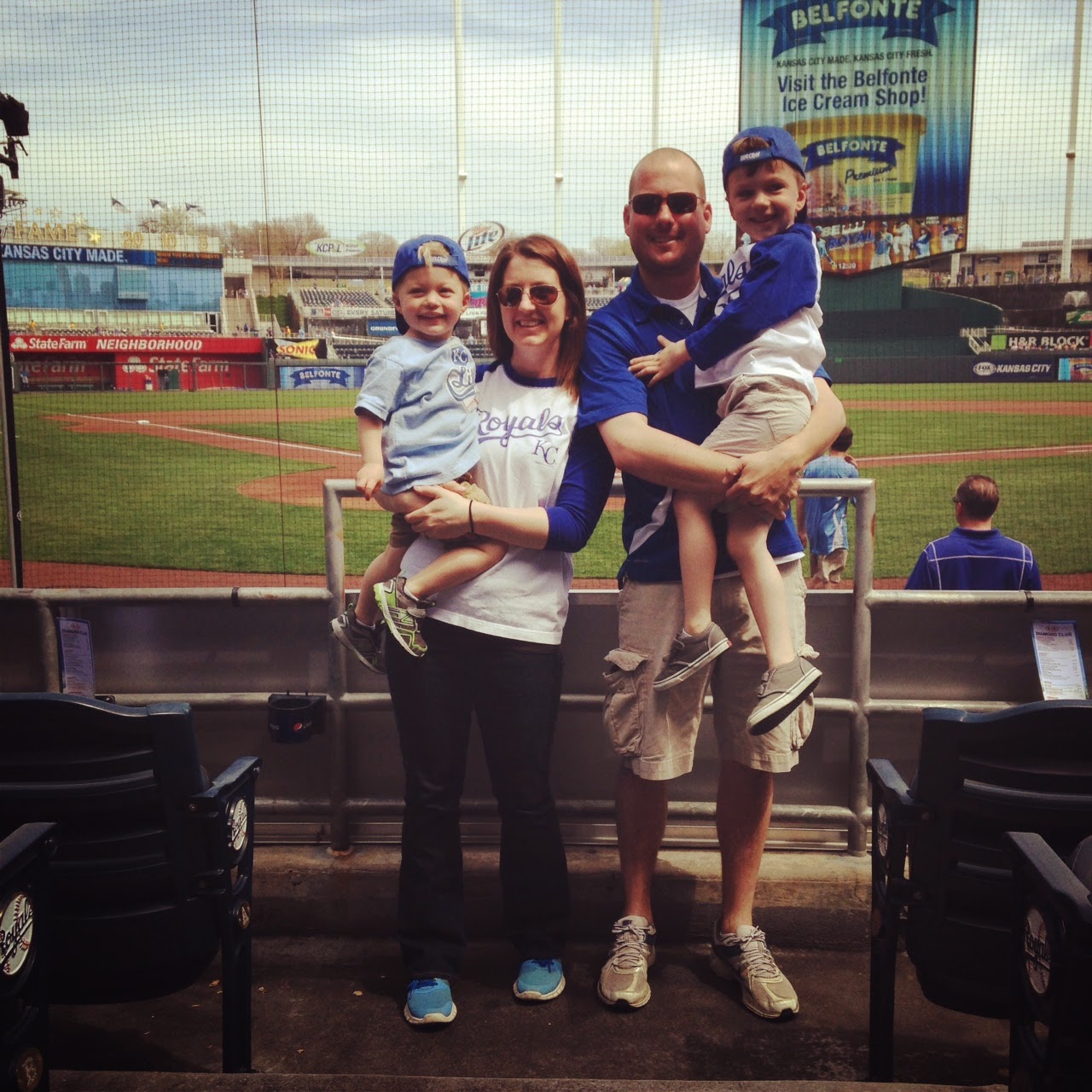 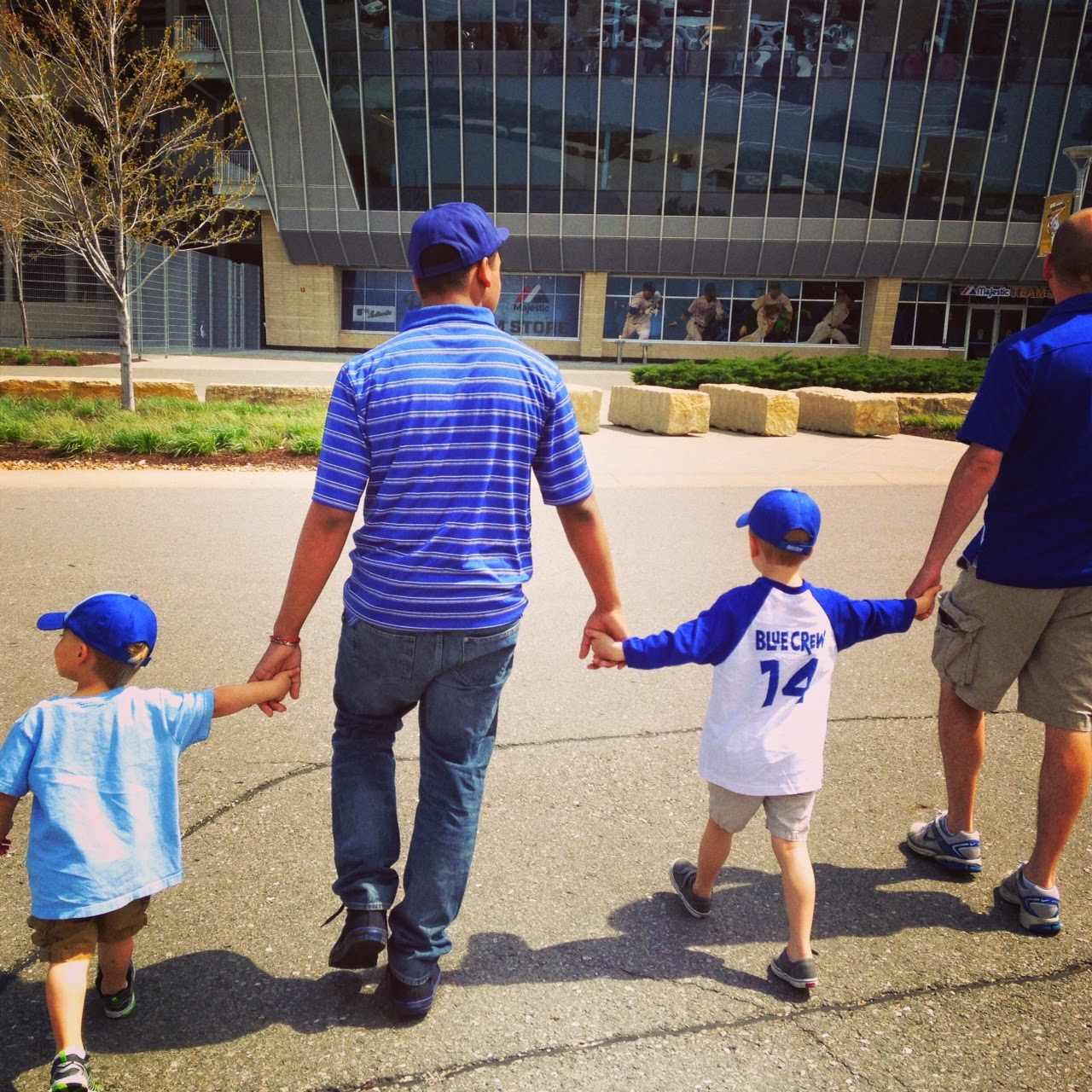 We met up with my parents for a game where they surprised us with a few extra fans that evening. 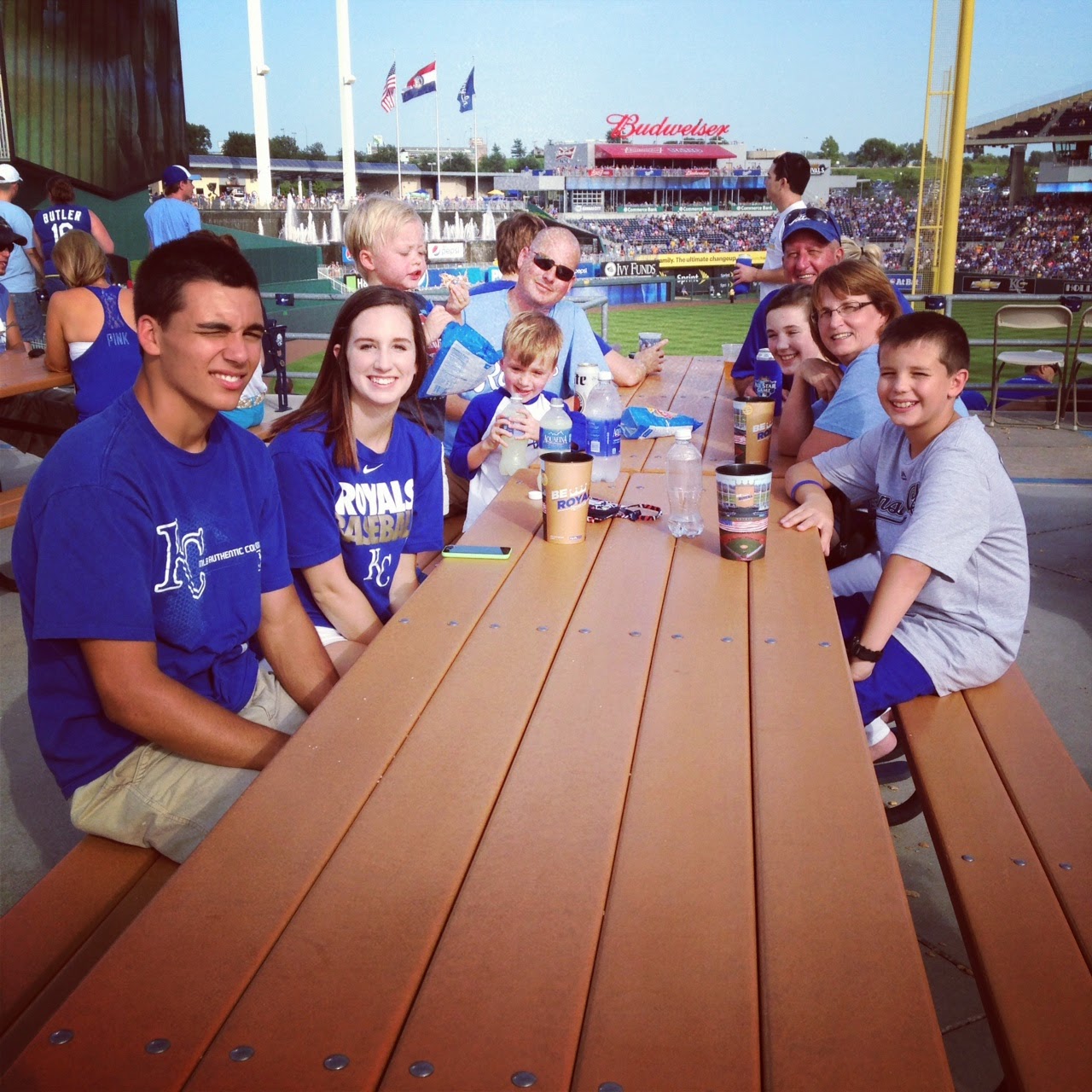 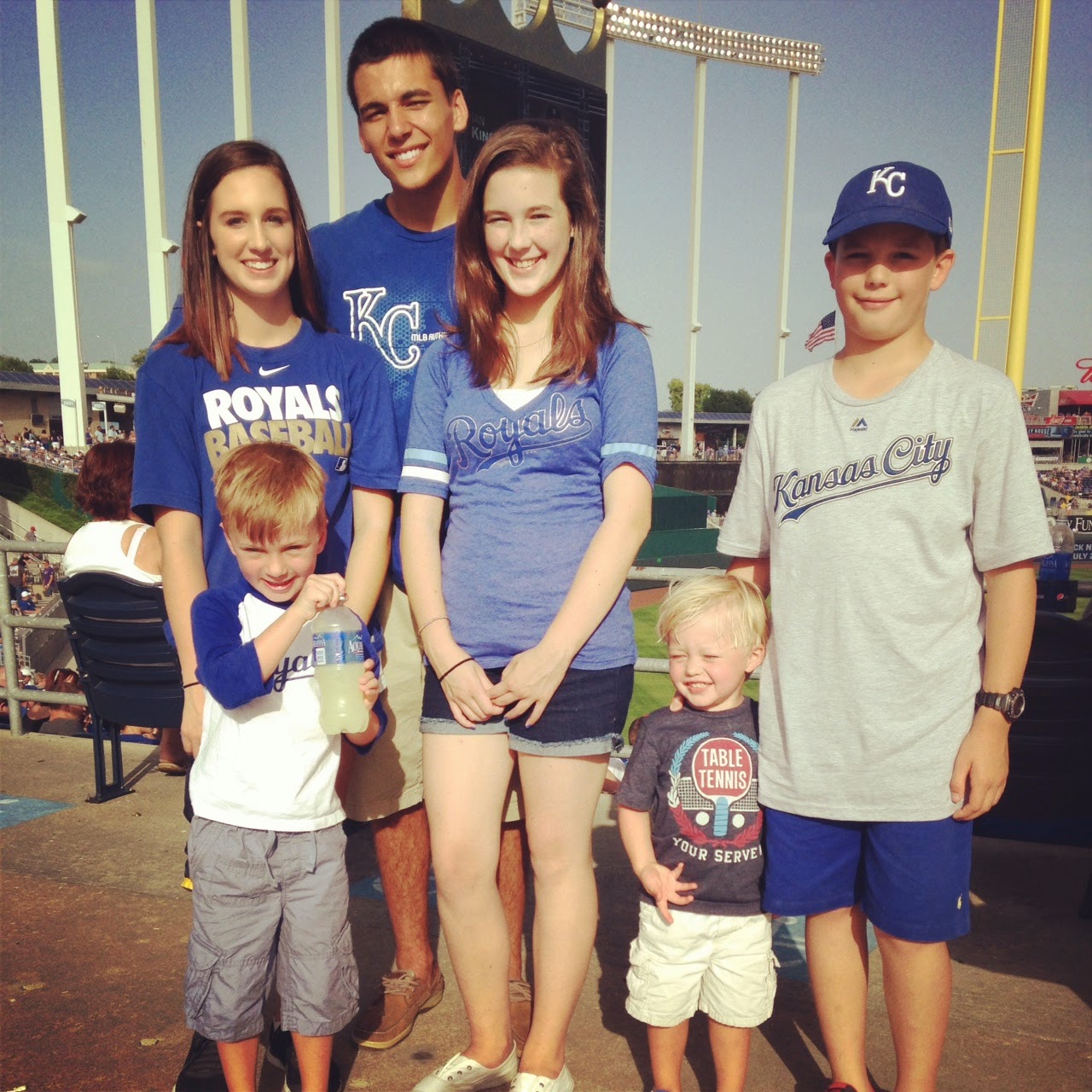 & on September 15th we went on a date night & beat the White Socks, the curse had been broken and we felt as though any game from there on out was fair game--pun intended. 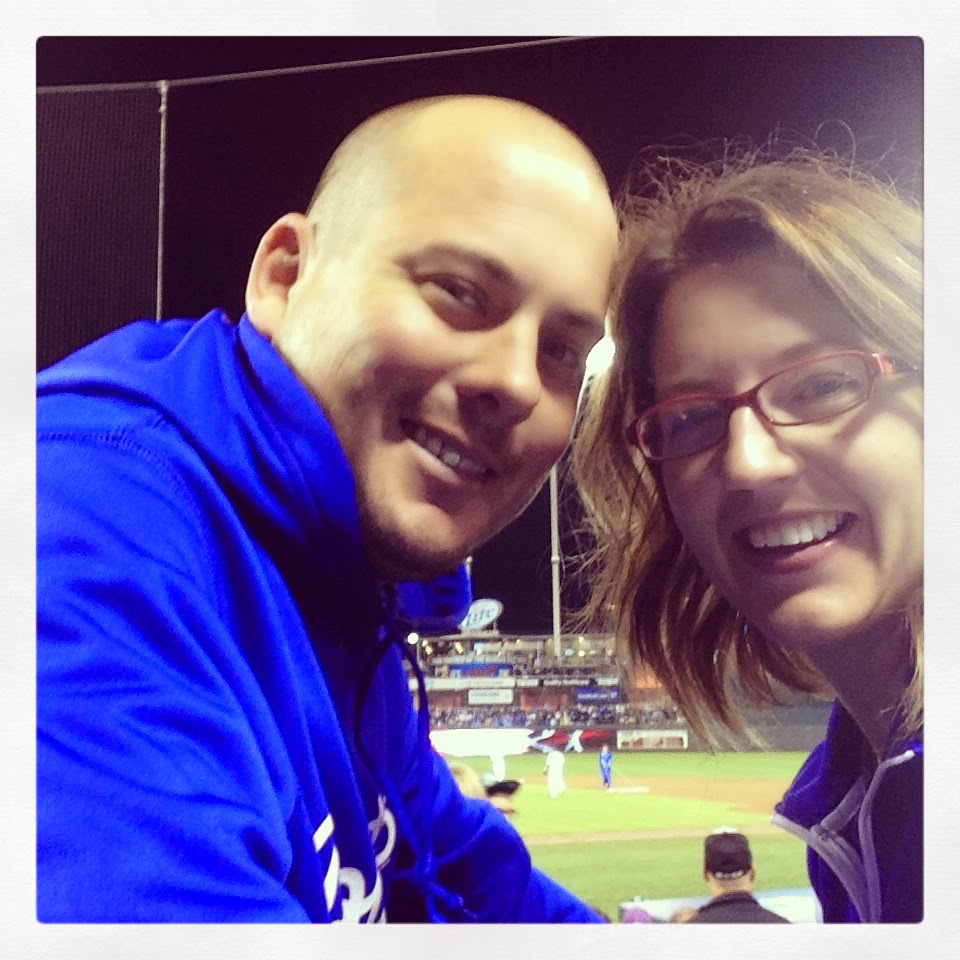 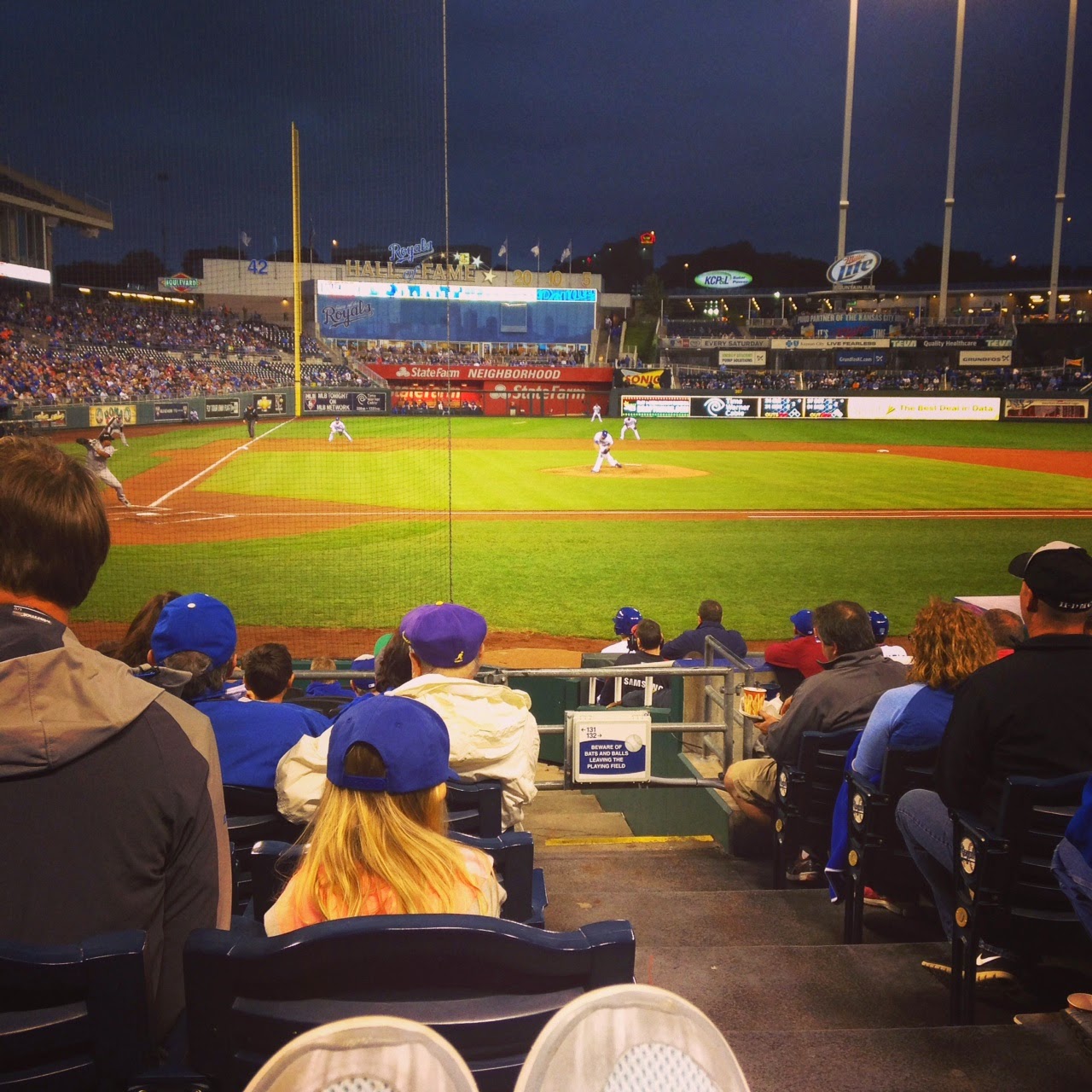 The last two weeks of September were unreal. Will we or won't we make it to the playoffs? Will we get to know what it really feels like to be in a playoff atmosphere after such a long drought? Could this really be OUR year? It was almost as if you didn't want to watch whatever it was that was happening. "I can't look, just tell me the score when its over."

I won't forget where we were with they clenched our first playoff birth since '85---right in my living room with the same individuals that we started the season off with, Grammy, Adam, Becky and Colton. The boys even got to stay up and witness history & we took a selfie of course.

I may have cried just a little while watching those boys celebrate. Their hard work and dedication was paying off and they were peaking at just the right time.

& that evening started what will go down in history as one of the wildest playoff runs in the history of MLB. Justin and I were lucky enough to grab 4 tickets to the Wildcard game at Kauffman stadium where we hosted the Oakland A's. On paper, they were the superior team. No one really had us winning the game---except a dugout full of baseball players, 40k+ fans standing on their feet the entire game and thousands of true KC fans around the world. 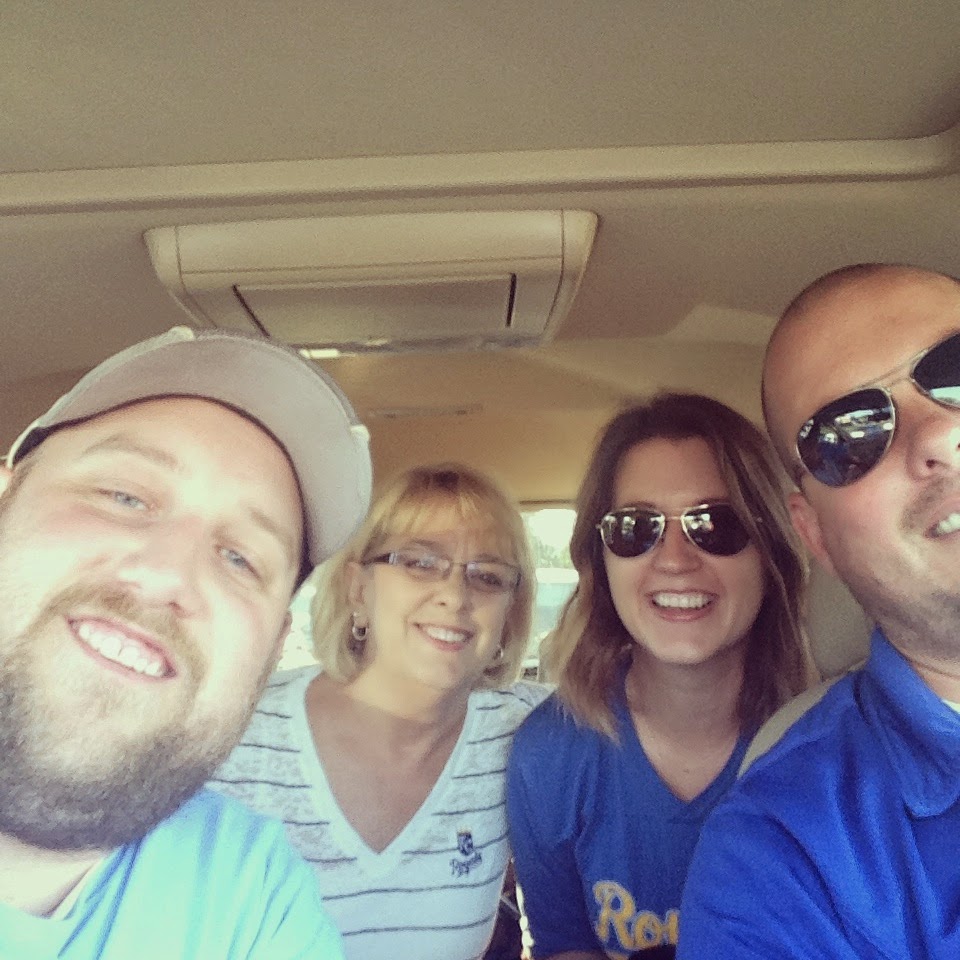 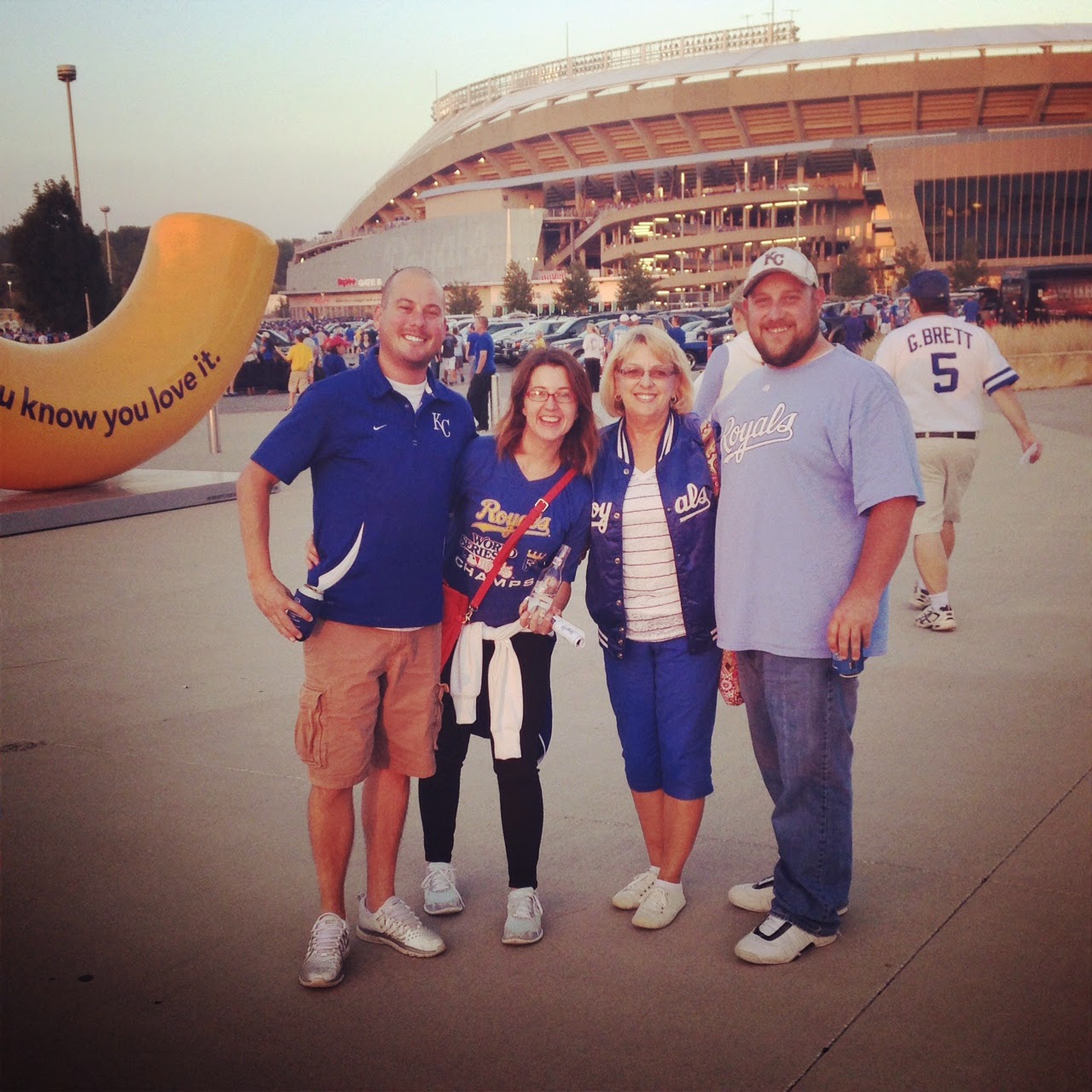 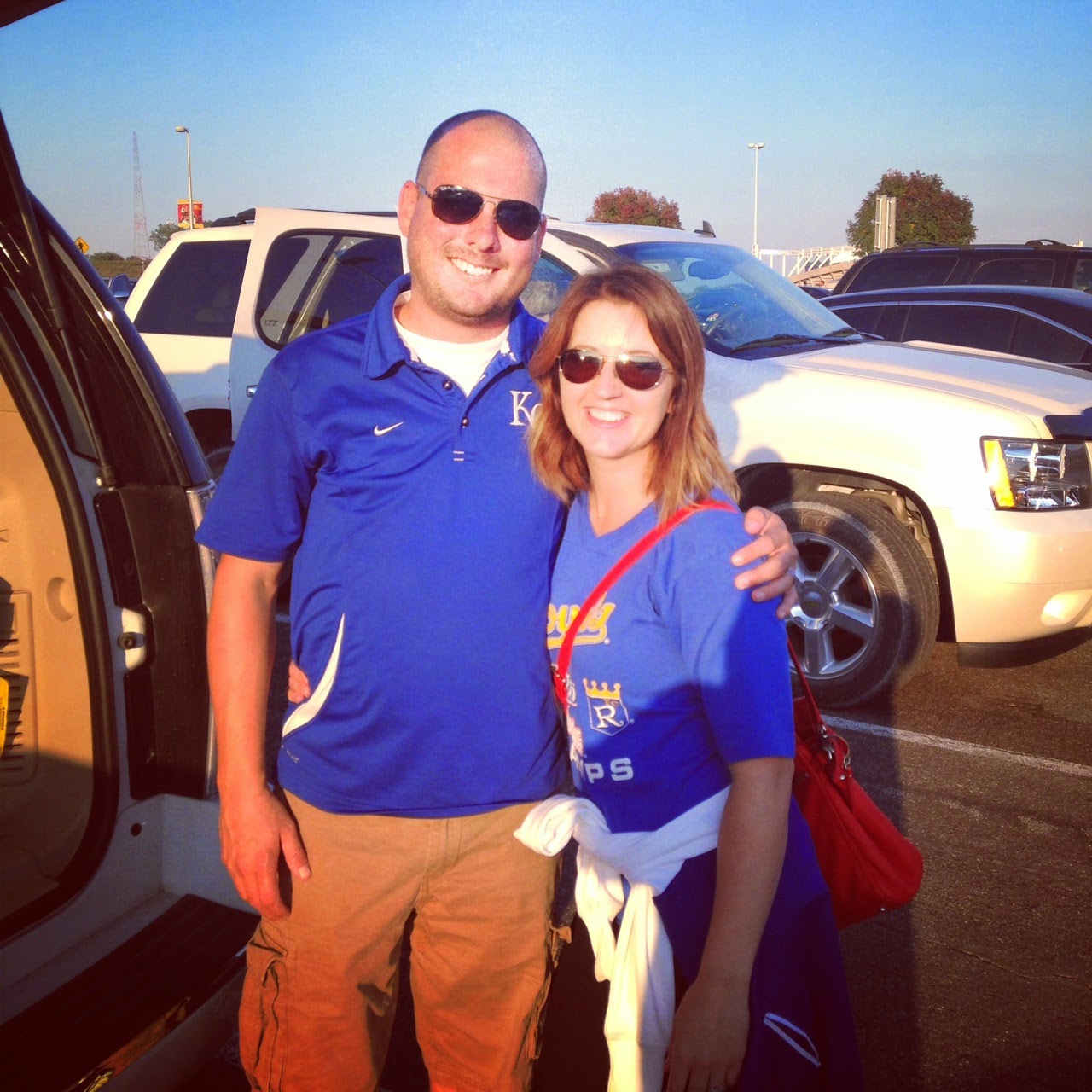 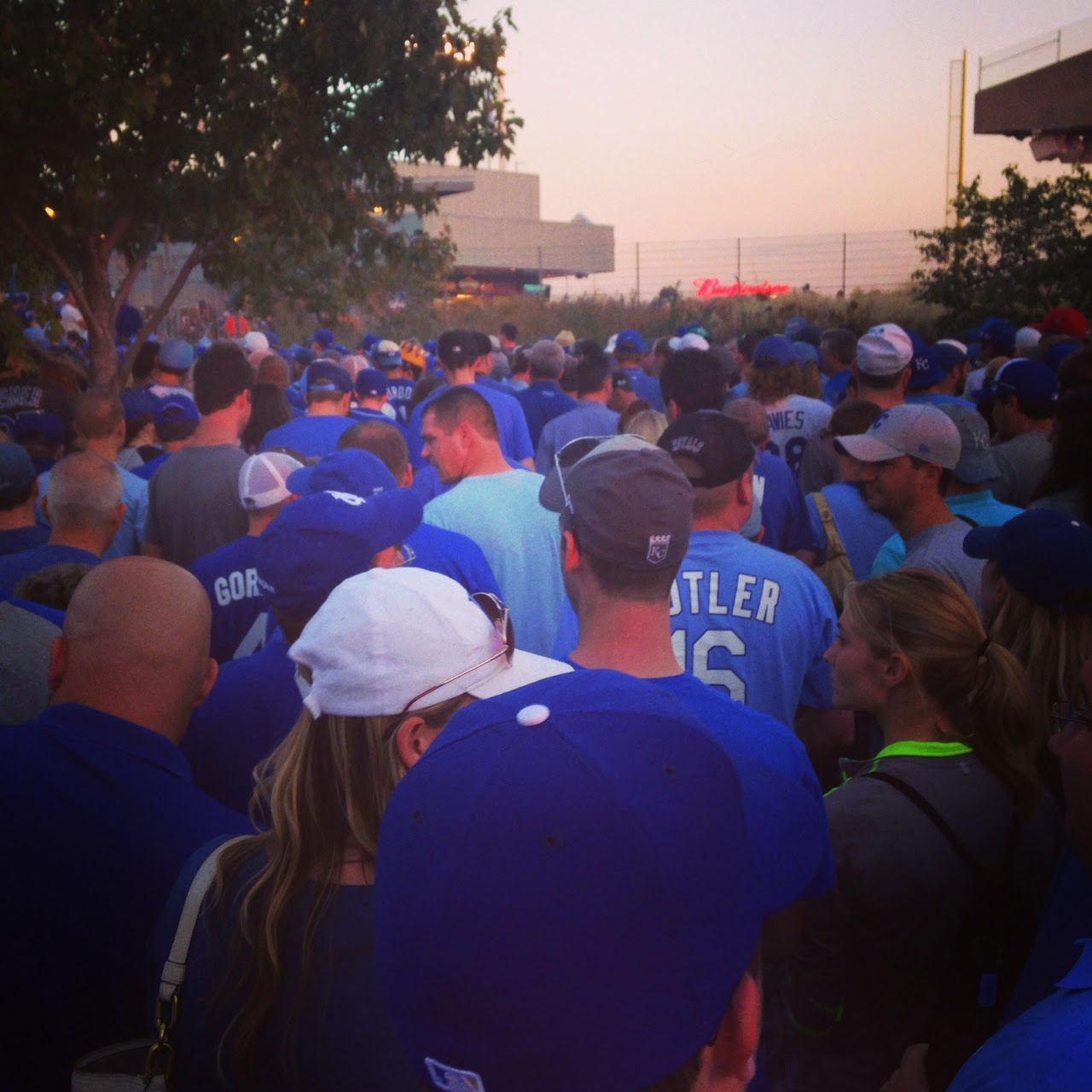 How could small ball come out on top? Well it did & it was the most EPIC night of our lives. I still can't believe what I witnessed in person. We went from the highest of all highs to the lowest of all lows to maybe we have chance to don't look back boys & then we came crashing back down, only to be picked back up by Salvie's base hit which shot past the 3rd basemen.

Janet was saying Hail Mary after Hail Mary. I had my towel on top of my head chanting to myself, you can do this. you can do this. over and over and over. As we heard the crack of the bat there was this silence that came over the stadium for a split second as we all hoped and prayed and would pass through & when it did, all HELL broke loose in that place. Everyone was hugging, high-fiving, and screaming THAT JUST HAPPENED. 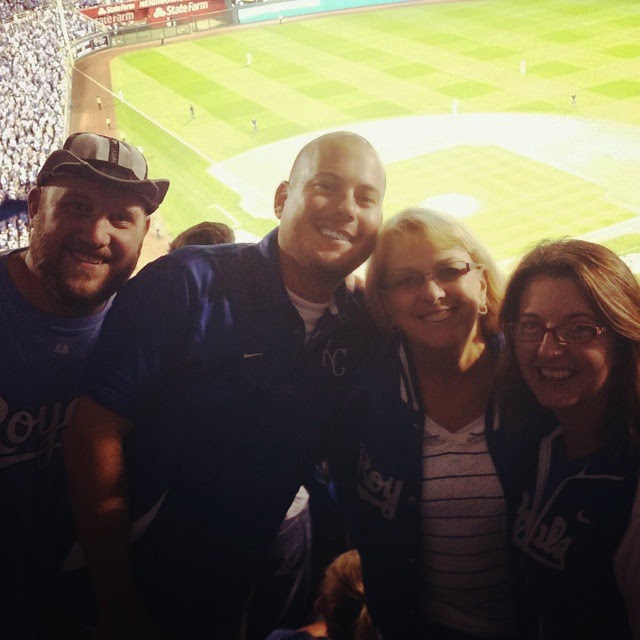 It was an unbelievable feeling and Justin and I were still in shock when we pulled into our driveway just before 2 in the morning. Not only will that game go down as probably one of the best games EVER in the history of MLB but it also had to be one of the longest games EVER too---4 hours and 45 minutes and 12 innings. EPIC. 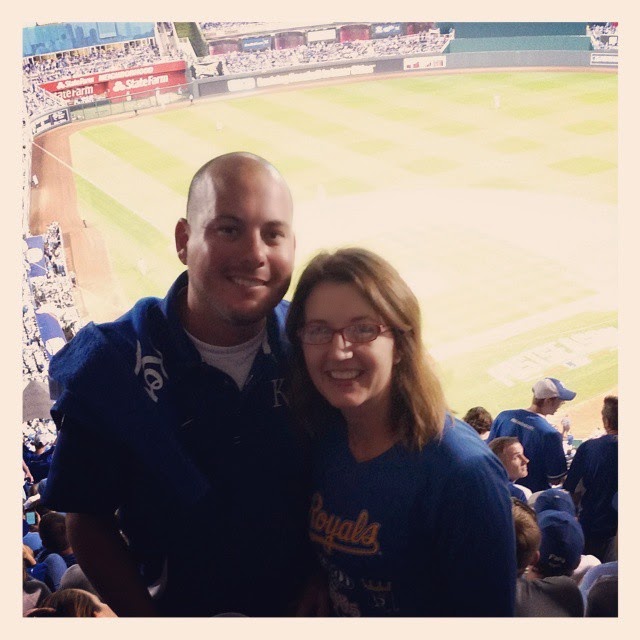 & that game set the stage for the next series with the LA Angels. Once again, we were not favored but don't count our Boys in Blue out. We not only took the first two games from them on their own field, we finished them out in game 3 at The K. & although I wasn't in attendance, I didn't miss a second of the games--I may have had to get a few extra Sonic Teas to help get me through the next day and may still not be caught up on sleep but its totally worth it. Man are these boys planning ball right now---the whole nation is behind them.

We have saved every news headline from the Kansas City Star, some day the boys will get a kick out of them. But it isn't just headline and stories from KC, & other fans, fans of the Orioles are sharing about how nice our ball club is, well that's icing on the cake. They are just boys having a good time. 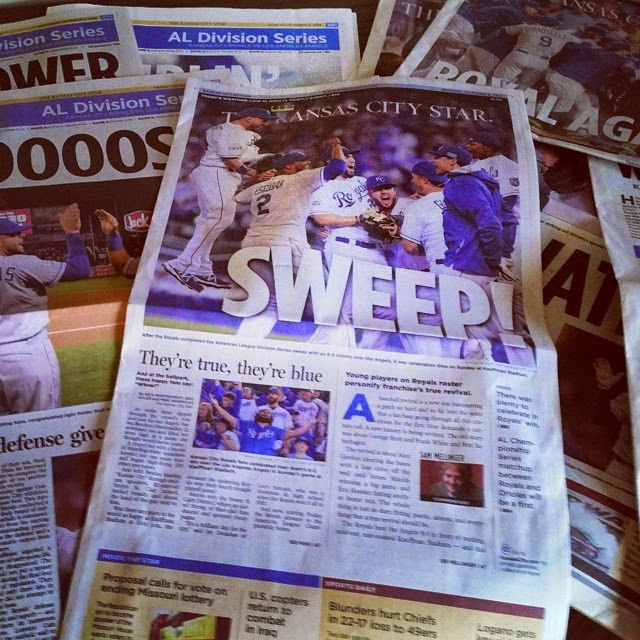 & here we are up 2-0 on the Orioles. Our first match-up back on our home field. & I couldn't be more excited for the game tonight. A little nervous actually---I guess I finally know what it feels like to be my mom as she watched me playing in high school. She always had her hands buried in her face and just as nervous as could be. & granted, these aren't "my" boys but they are OUR boys & that is what I love about the Kansas City Royals. If you have been a fan for as long as we have, my dad has, then you feel like you are right there with them---along for this amazing ride that will only get sweeter. It's been great, but it ain't over yet! 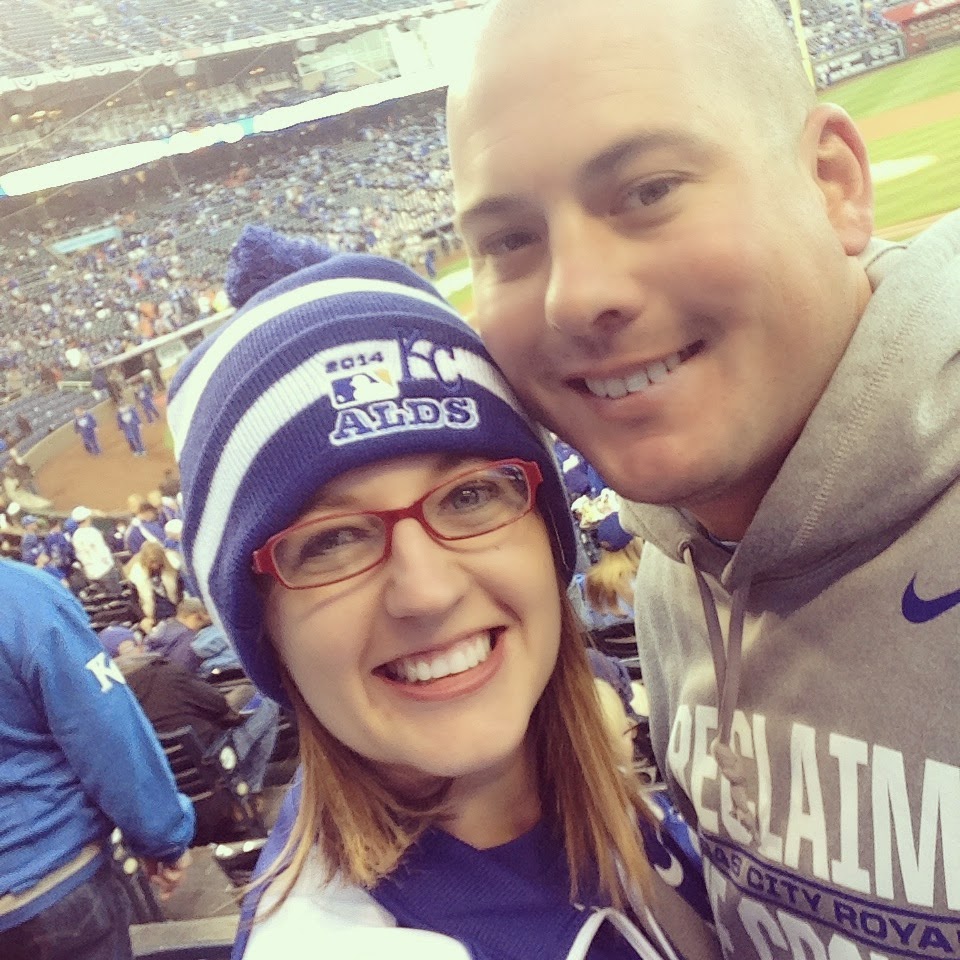 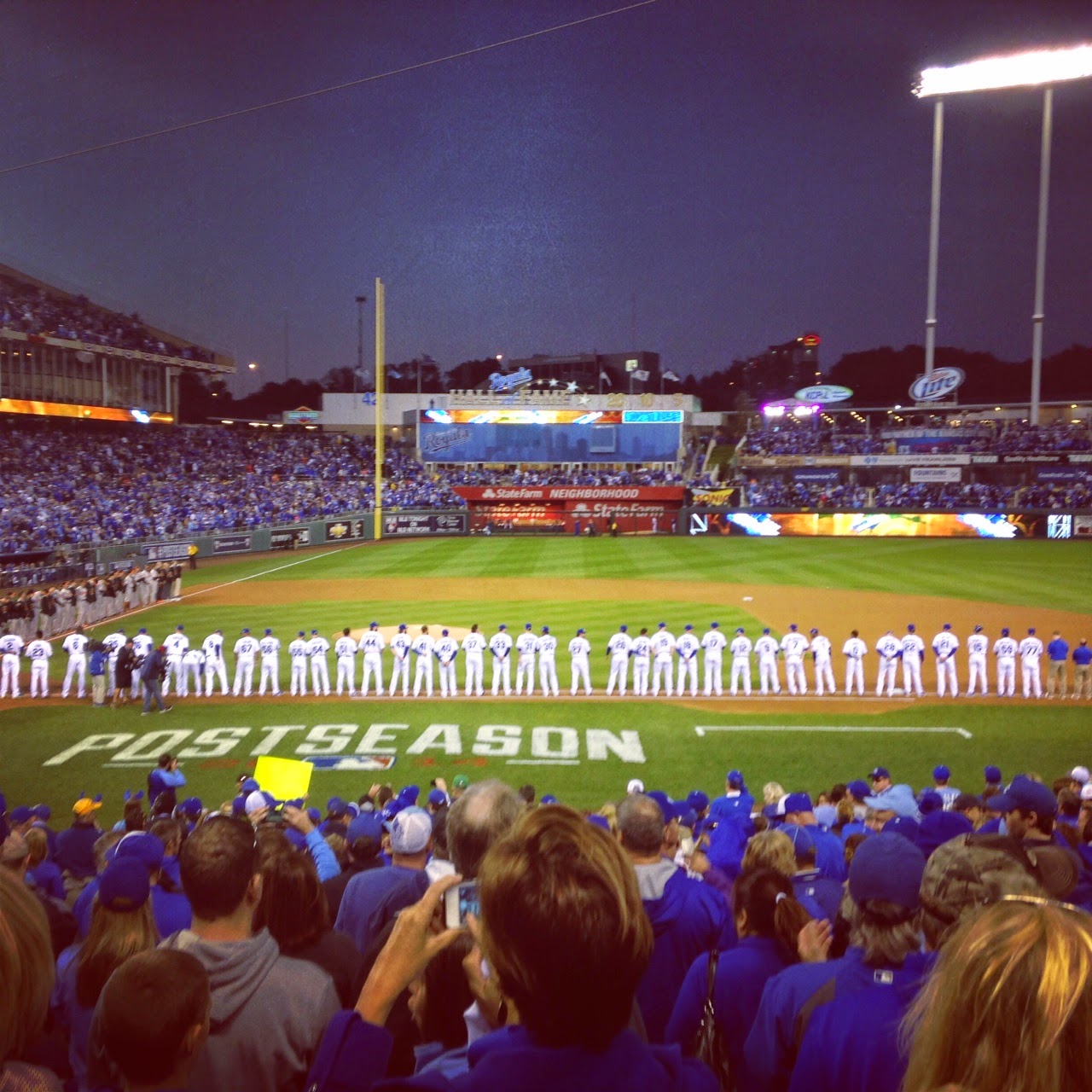 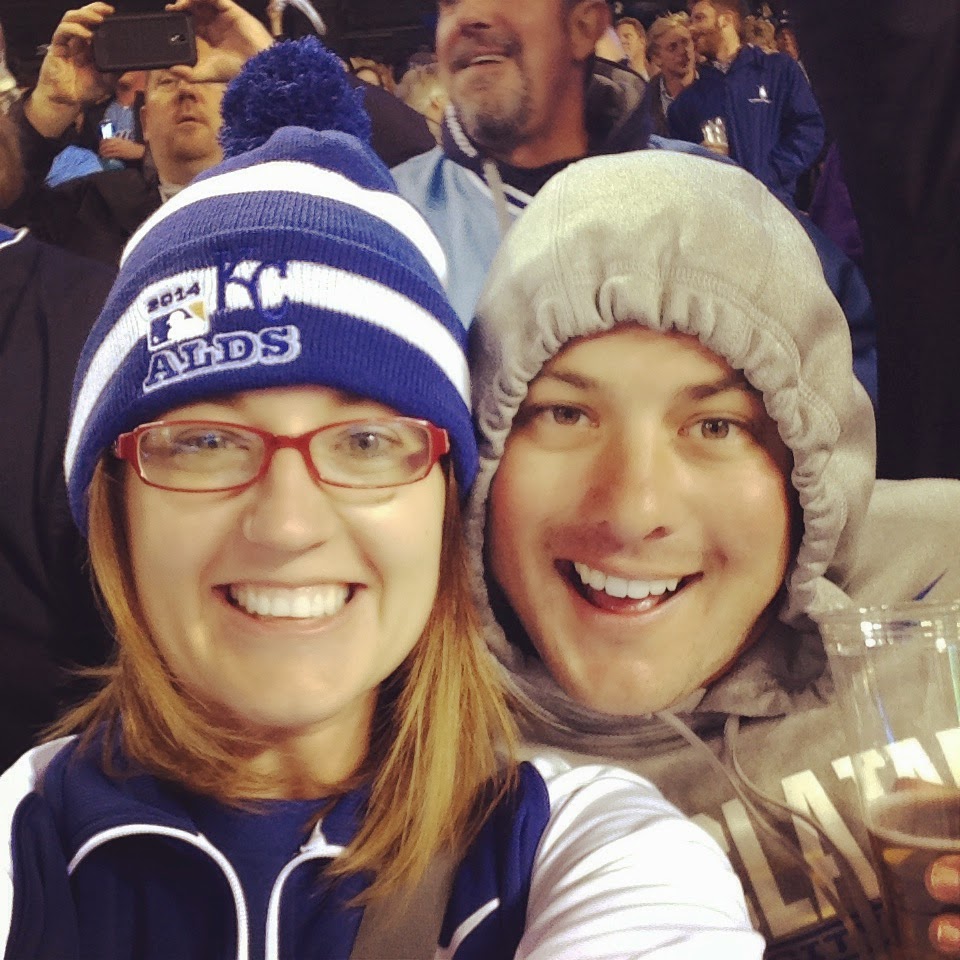