For Christmas in 2012 Santa brought Kaden a balance bike. He had been asking for a new bike and we knew he was ready to move on from the tri-cycle he had so we started doing our research. We decided that instead of a bike with training wheels that we would give the balance bike a try. He was excited. And since he got it in the middle of the winter we decided that he could ride it around the house & it honestly took him no time at all to figure out how to ride it. Finally when the snow melted we took it outside and he got to dart around the cul-de-sac.

Fast forward a few years and about 6 inches---he was starting to outgrow the good ole' balance bike. We raised the seat up as far as we could but you could tell he was just getting bored quickly. I'm sure it didn't help that he saw the older neighbor boys and girls riding bikes with pedals so when his birthday rolled around he knew exactly what he wanted, "A bike with PEDALS."

We went on another bike search and in the end just picked up a Spiderman Huffy. He loves Spiderman and he loves red so we knew he would be thrilled when he saw it. We had to do a little planning ahead because he turned 5 only hours after we returned from St. Maarten so we knew we had to have the bike ready to go the next morning when he woke up. & we did. 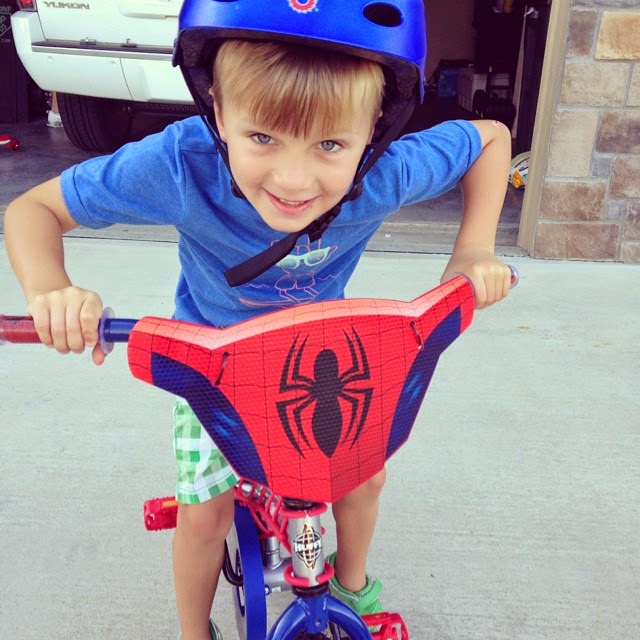 It came with training wheels but I quickly removed them in hopes we wouldn't need them. After all that is the major selling point with balance bikes. It teaches kids how to balance on two wheels so that you can skip the training wheel part & we were ready to put their "claim" to the test. 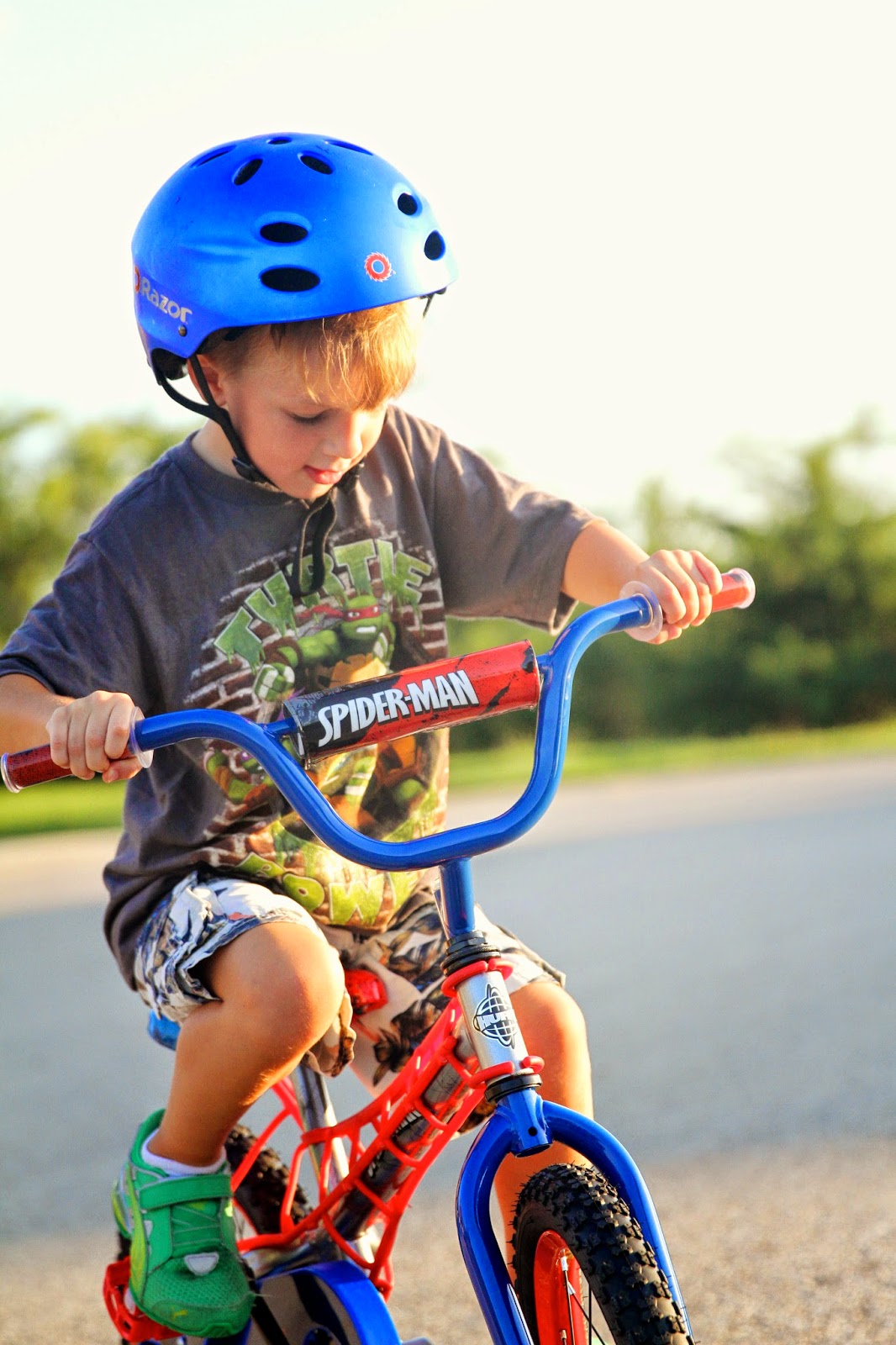 He wanted to ride it immediately but we had a few errands we needed to run but I told him that after we got home we would try it. The first evening it was mostly me holding onto him as I ran beside him. He was having a little bit of a hard time figuring out the pedals. We lasted about 10 minutes and were on our way back inside. 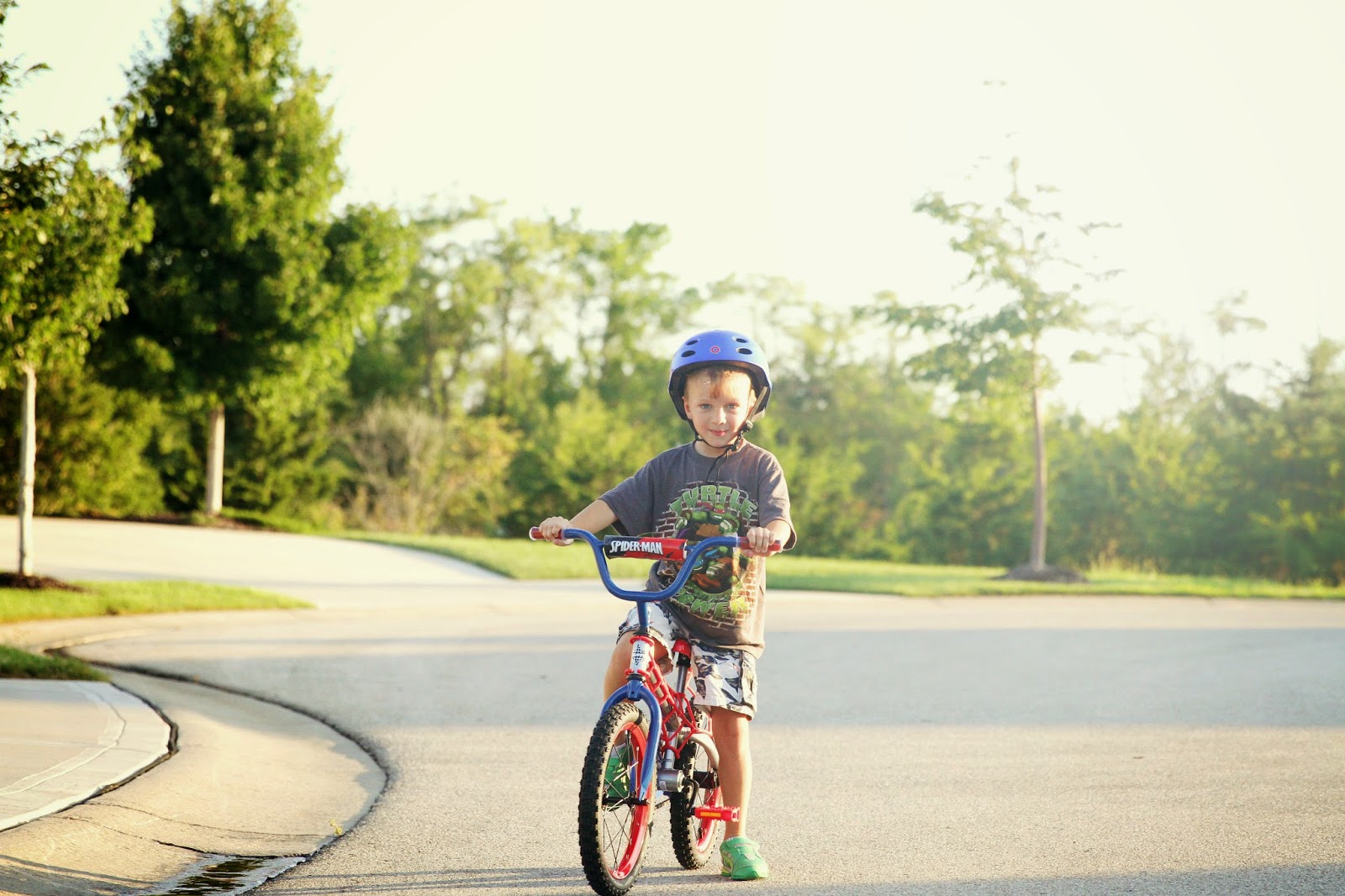 The following evening we gave it another shot. I explained that the pedals on this bike were just like the ones on his trike. I held onto him a couple of times and would let go for seconds at a time. He would realize I wasn't holding him and would get worried. I went inside and called Justin to come out, he watched a couple attempts and said we should put the training wheels on. I wasn't ready for that, we hadn't even given this a valiant effort yet. We kept working and 5 minutes later Kaden was yelling at me to let go. "Don't hold onto me, Mom. Are you holding onto me?" 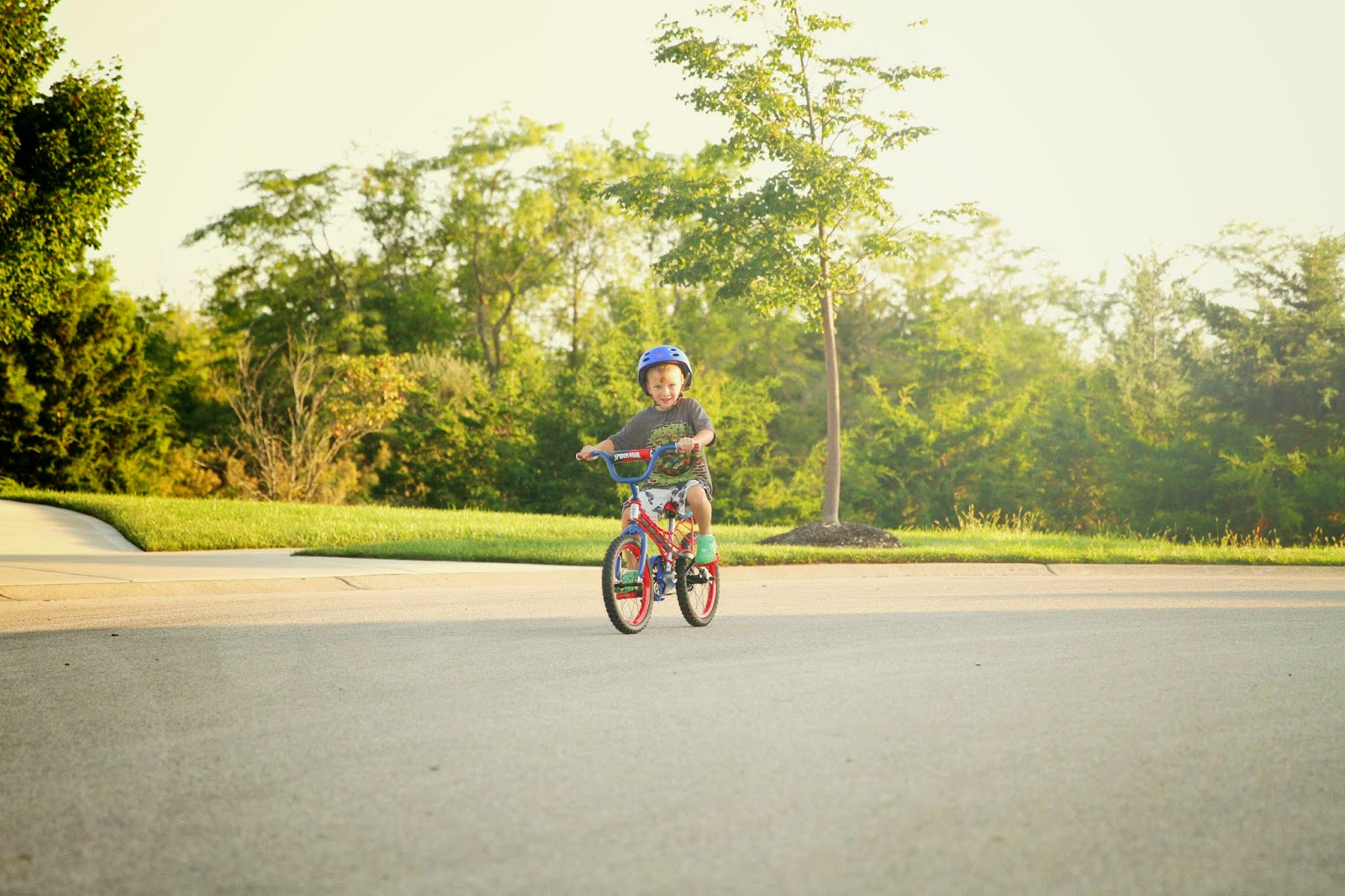 & from that moment on he was off on his own. He figured out to come to a stop all on his own & half the time was able to get started on his own. & for some reason teaching my son how to ride a bike was a pretty emotional experience for me. Don't get me wrong, I couldn't have been more proud of him and how he picked it up so quickly but selfishly it is just one more thing on a very long list of items he doesn't need me anymore for. I guess I figured I had a little more time before this day came but he was ready and he made sure to let us know. I'm glad we listened to him and gave him a chance to shine riding on two wheels--it was an amazing confidence booster for him. But if teaching him to ride a bike was this emotional on me, I don't even want to think about what it will be like when he turns 16. 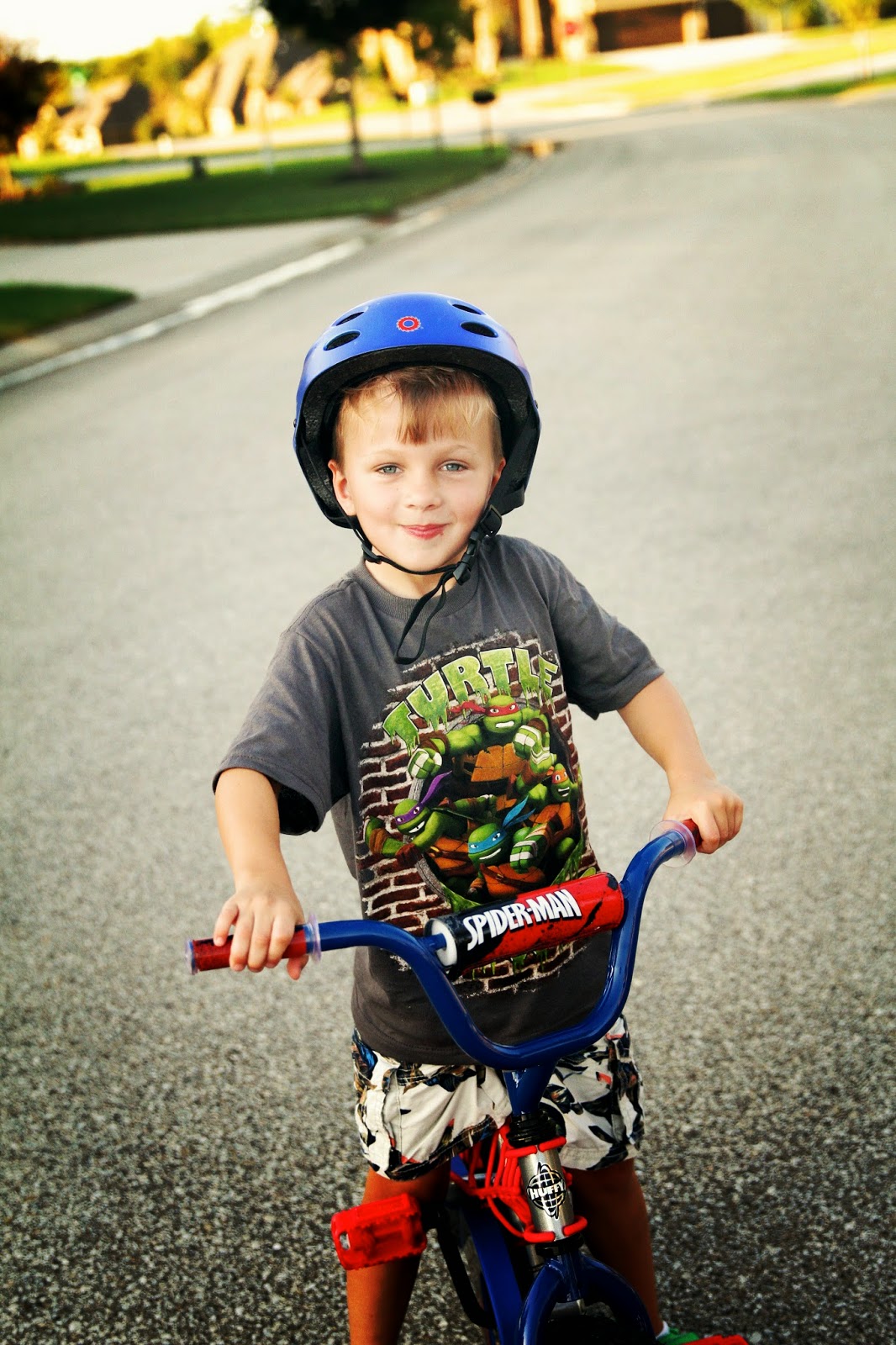 And this little guy isn't helping, he's right on his brother's heels now that the balance bike has been passed down to him. 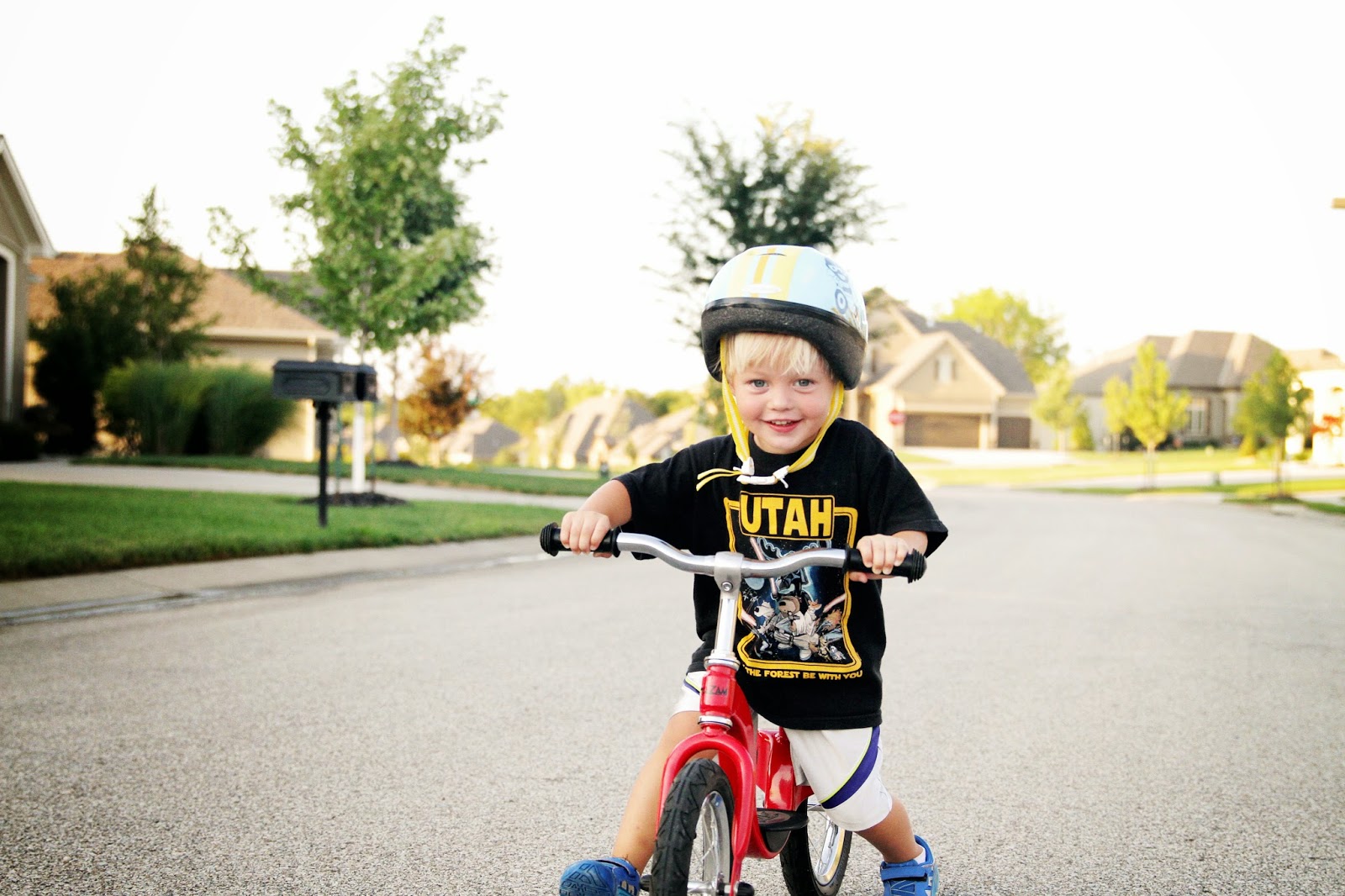 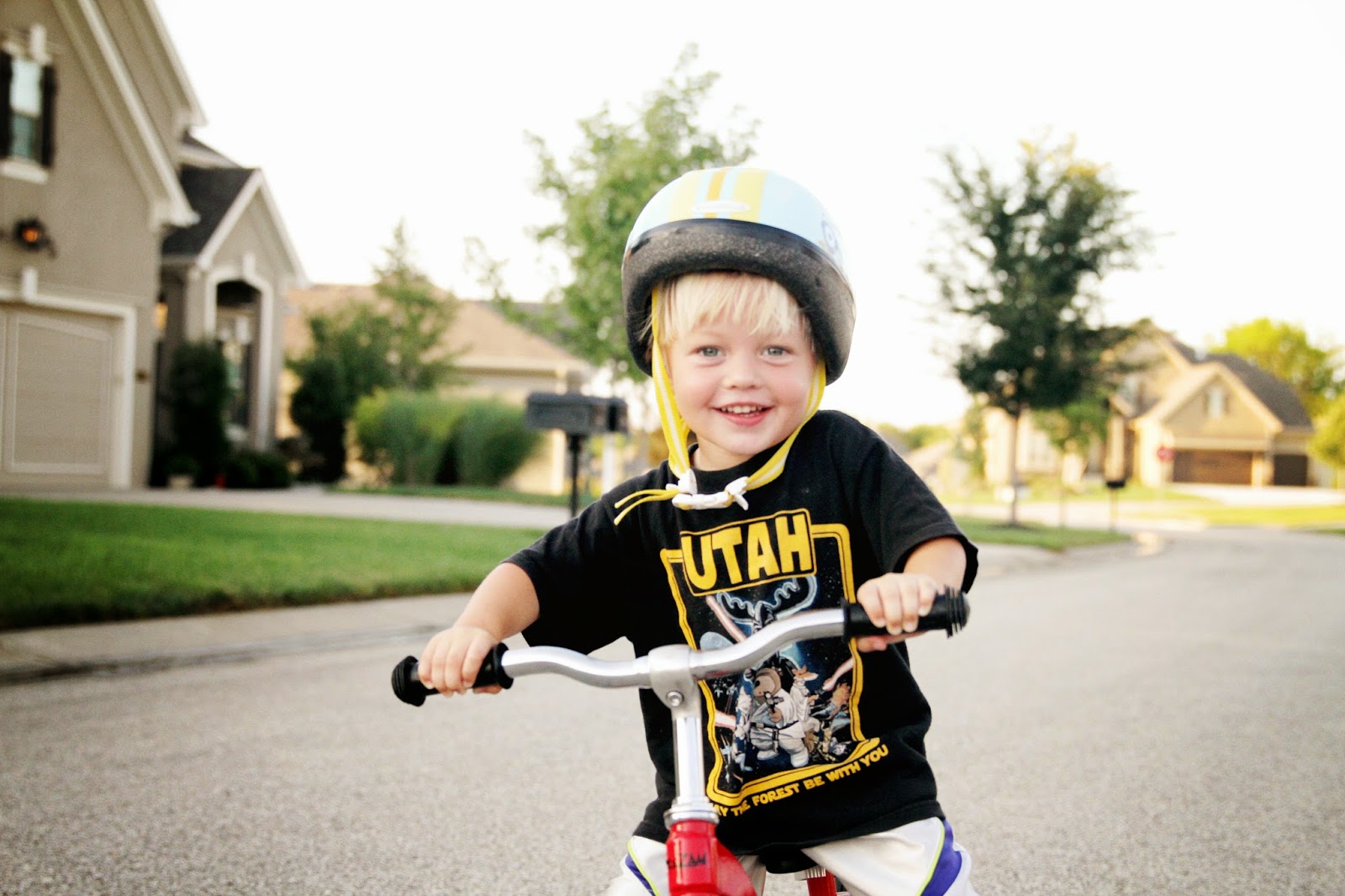