Our sixth day in St. Martin will go down as one of the BEST. DAYS. EVER. But we certainly weren't expecting too much because of what went down the day before.

But first we have to back up even a few days further, all the way to day two. While Janet and I were laying on the beach getting massages this cute little gal came around talking about excursions. This particular excursion would basically last the entire day, we would travel by boat around the island, have lunch, drinks, snacks and beverages provided and make 5 stops at specific locations around the island. We were looking for something fun and different to do on the island for at least one day, we couldn't stay at the resort the entire week! So we talked about it. We thought about it. We slept on the beach on it. & on Tuesday we booked it. If what they were advertising was anything close to what we were going to be experiencing, we were in for a treat. We were hoping for Wednesday but it was full so we got Thursday.

Fast forward to Wednesday. This was the windy day. Boats were coming in from the ocean and docking. Resort staff was advising against going out on Thursday too. We had already put down a deposit but we were okay losing it knowing that our day could be completely ruined by other wind storm and we really didn't want to take that chance. We had two little boys with us & if the water was rough the chances of them being scared and crying were probably as high as the waves. So I did what anyone would do--called to cancel. We were told it was a 12 hour cancelation policy but on our receipt it said 24 hours and after a very long and heated conversation we were stuck. We could go or we could stay at the resort but either way we would be charged. 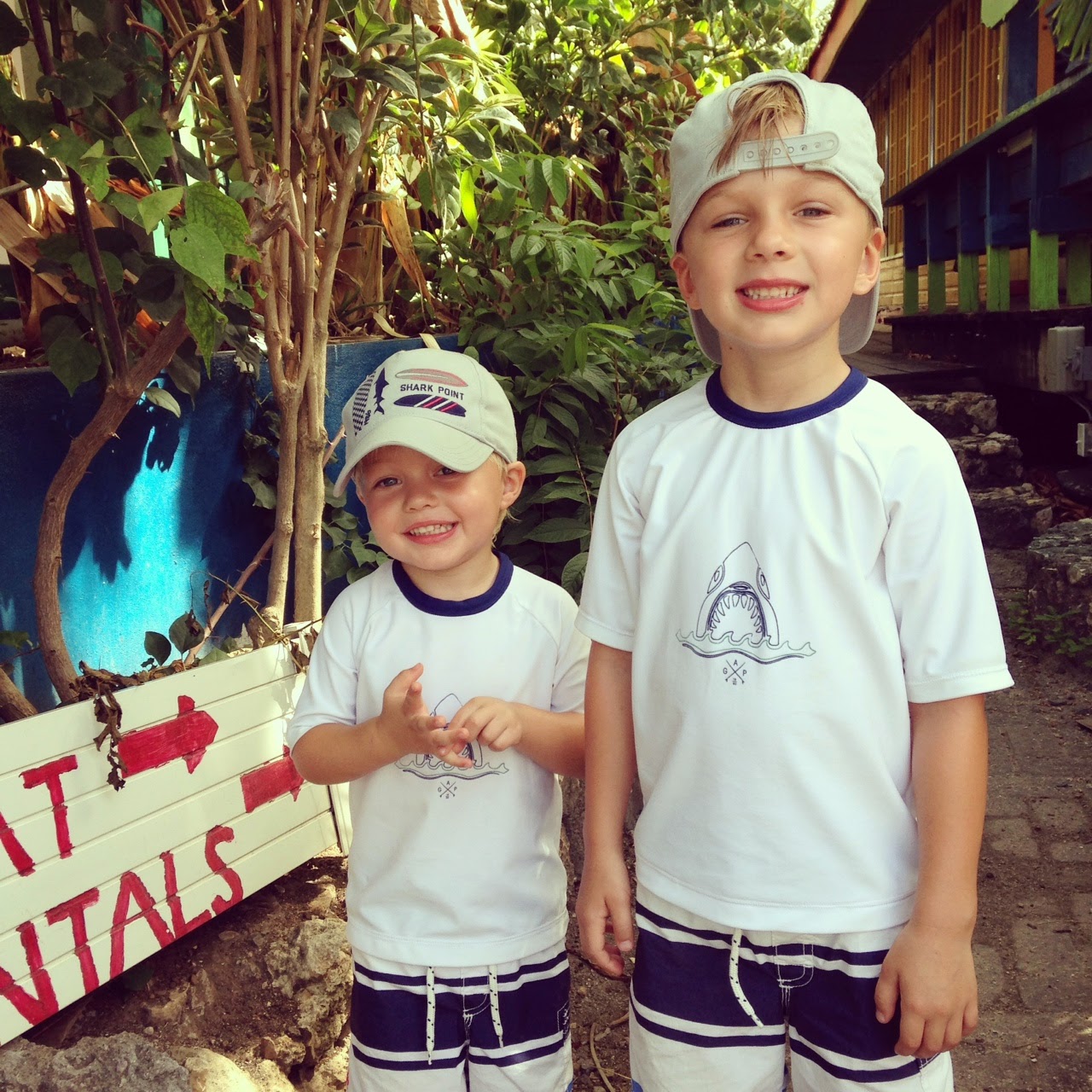 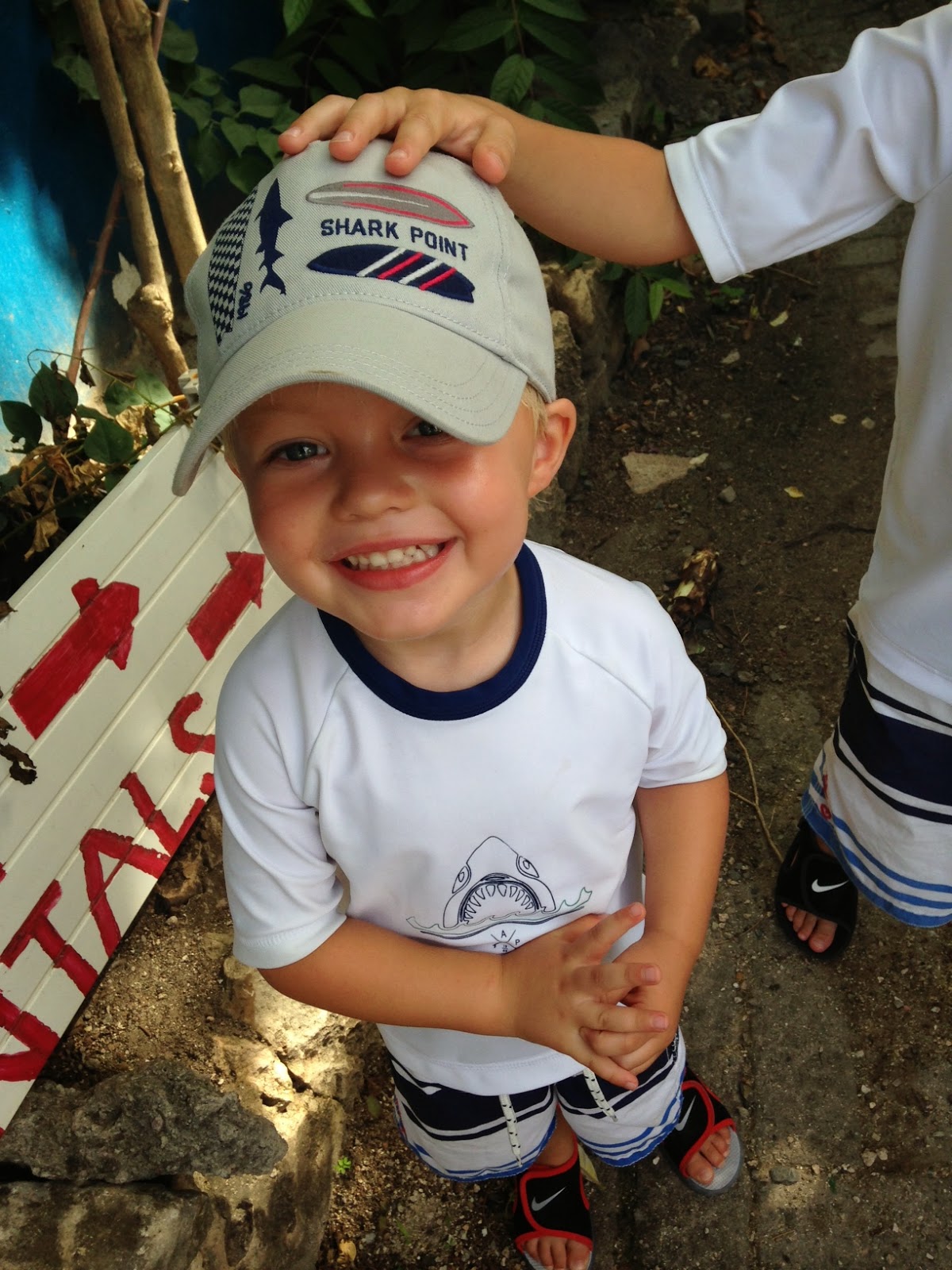 We woke up on Thursday and even though we had a sour taste in our mouth with how the conversation went the day before, we all put smiles on our faces and we started hoping for the best. It didn't start off on the best foot either, we were told the wrong location for meeting and ended up having to call to be picked up---guess there were two french bakeries close to our resort. 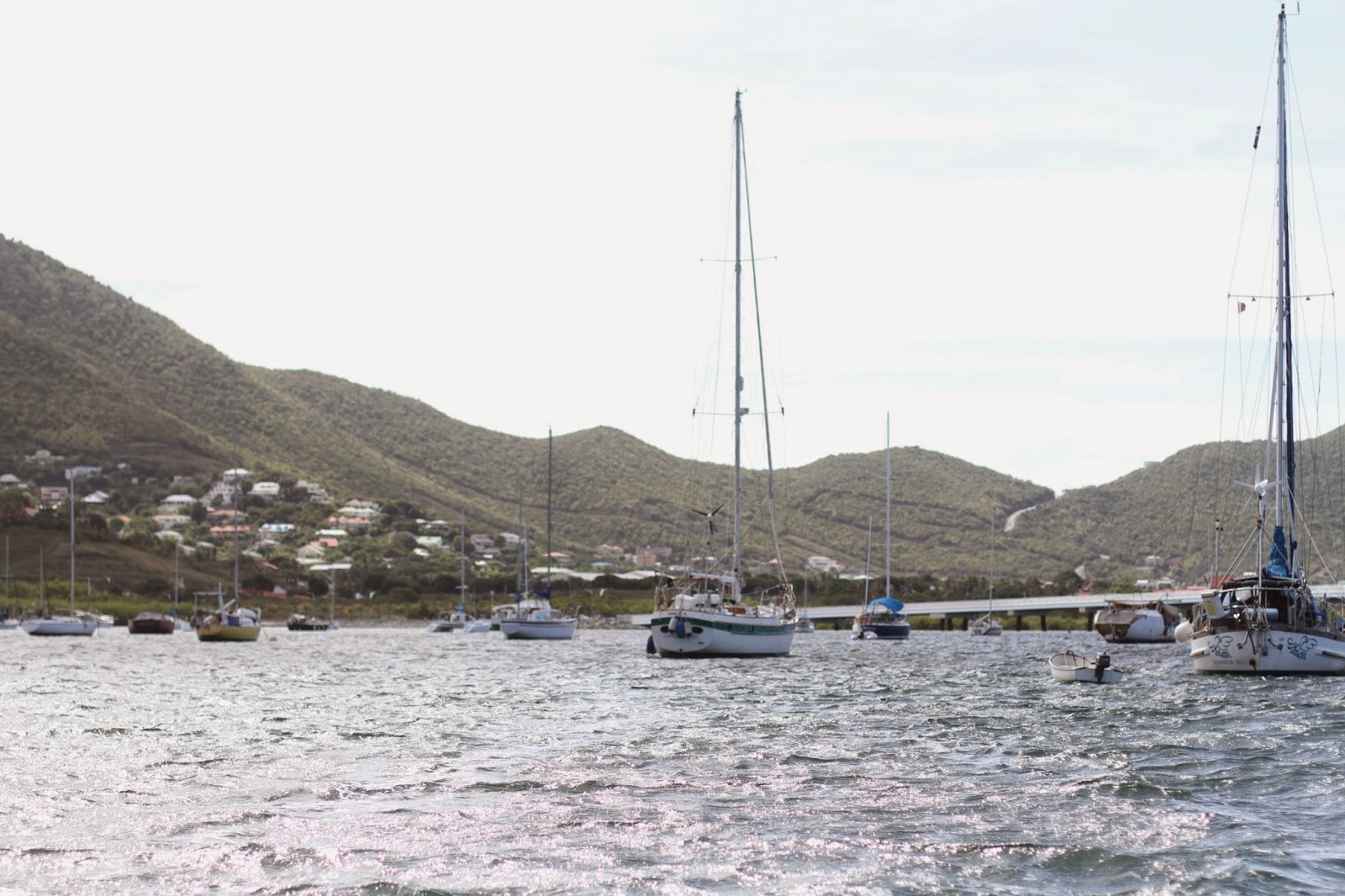 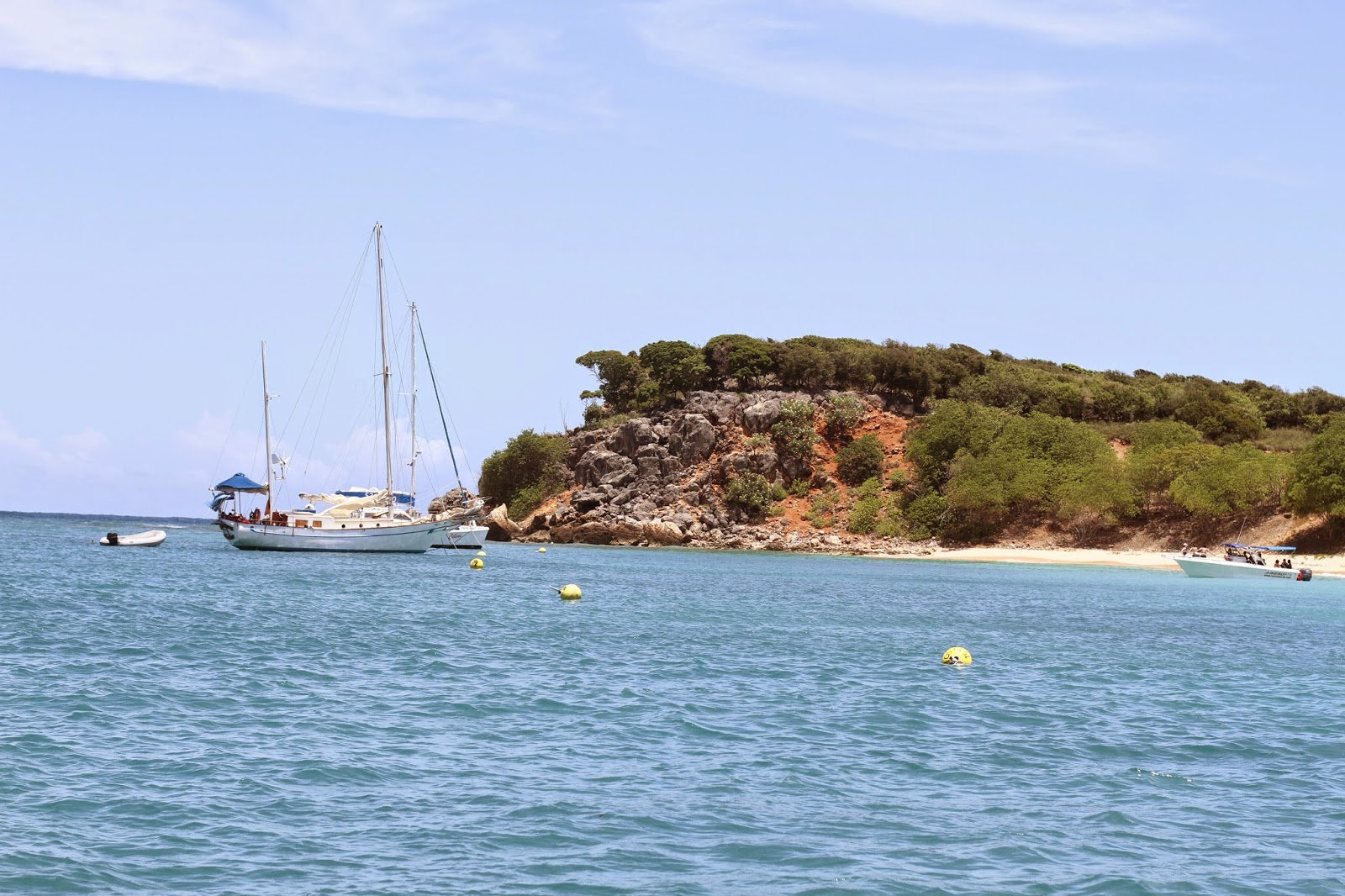 Finally it was time to board the boat. We boarded two by two and as we boarded they took our shoes and we didn't see them again until the end of the adventure. The boys, Justin, my dad and I all got the back of the boat. My mom and Janet got to sit right in front of the captains quarters and then two other couples were on each side of the front of the boat. Our skipper was Meechele & we couldn't have asked for a better skipper. 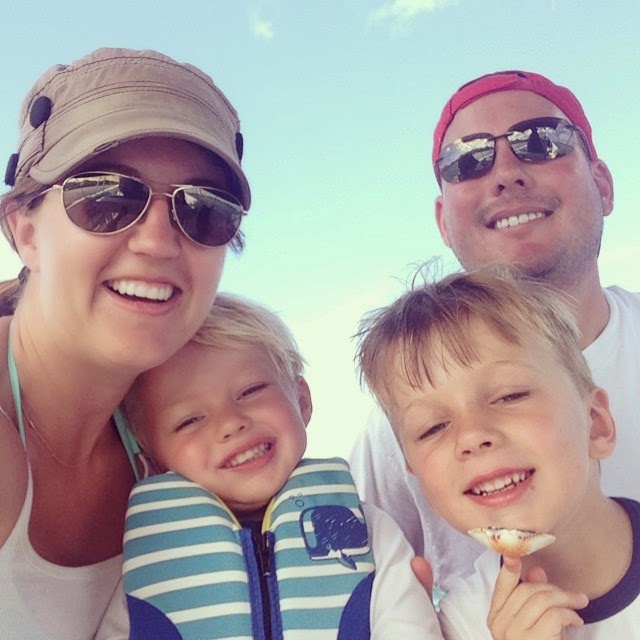 Our first stop was at Creole Rock. This rock was breathtaking. & it was protected. You weren't able to actually go up on shore but you could snorkel around the reef, which was gorgeous. We jumped in as soon as we anchored. The boys swam a little and then wanted back in the boat with Justin and off I went to explore. I've never snorkeled before & let me just say, if you could see how red my back and legs were, you would know how much I enjoyed it. I swam through a school of fish which stopped me right in my tracks. We saw sea urchins. We saw tons of different fish--bright colored ones and a couple very good size ones too. The first stop of the trip got two thumbs up. 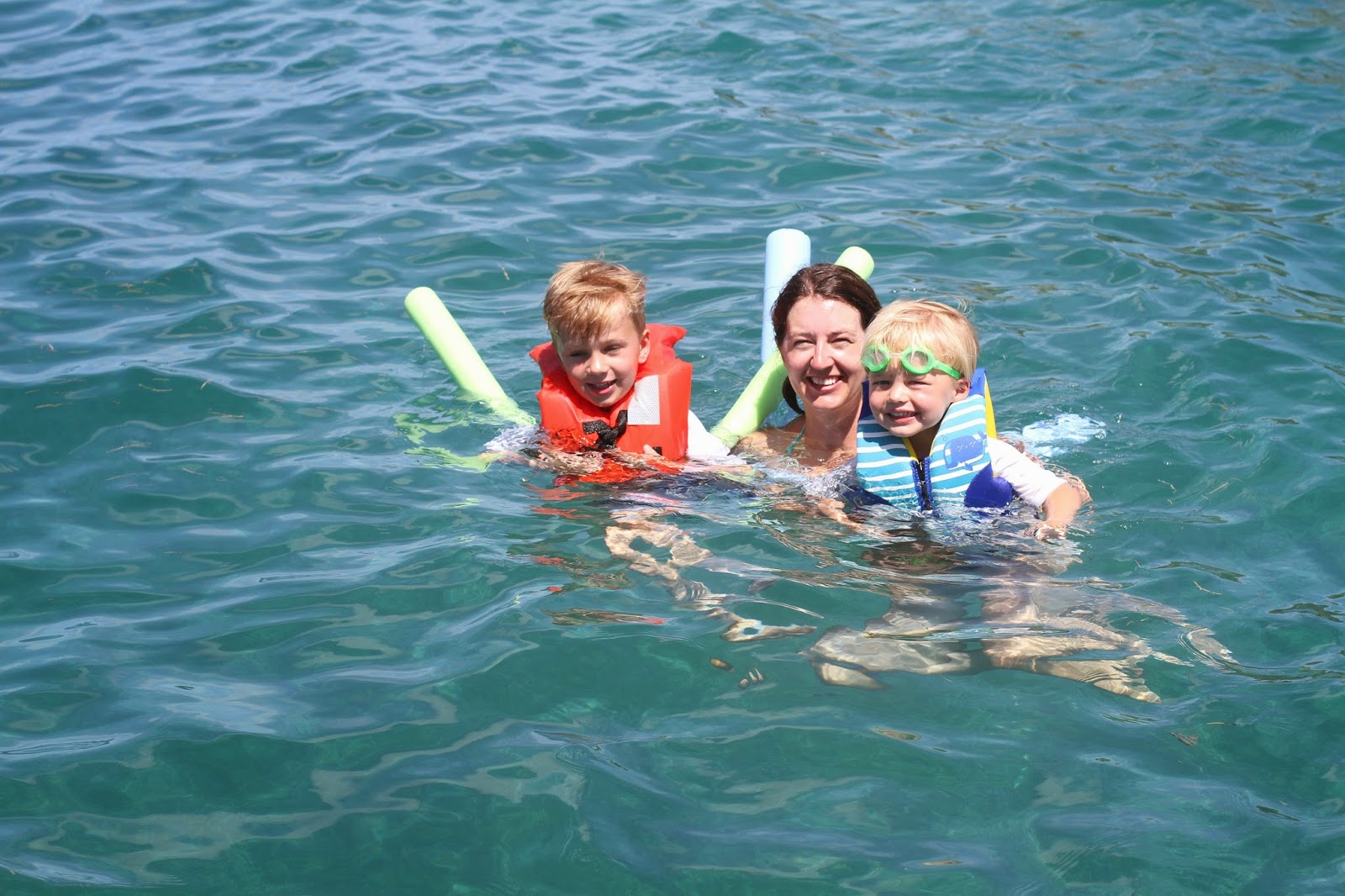 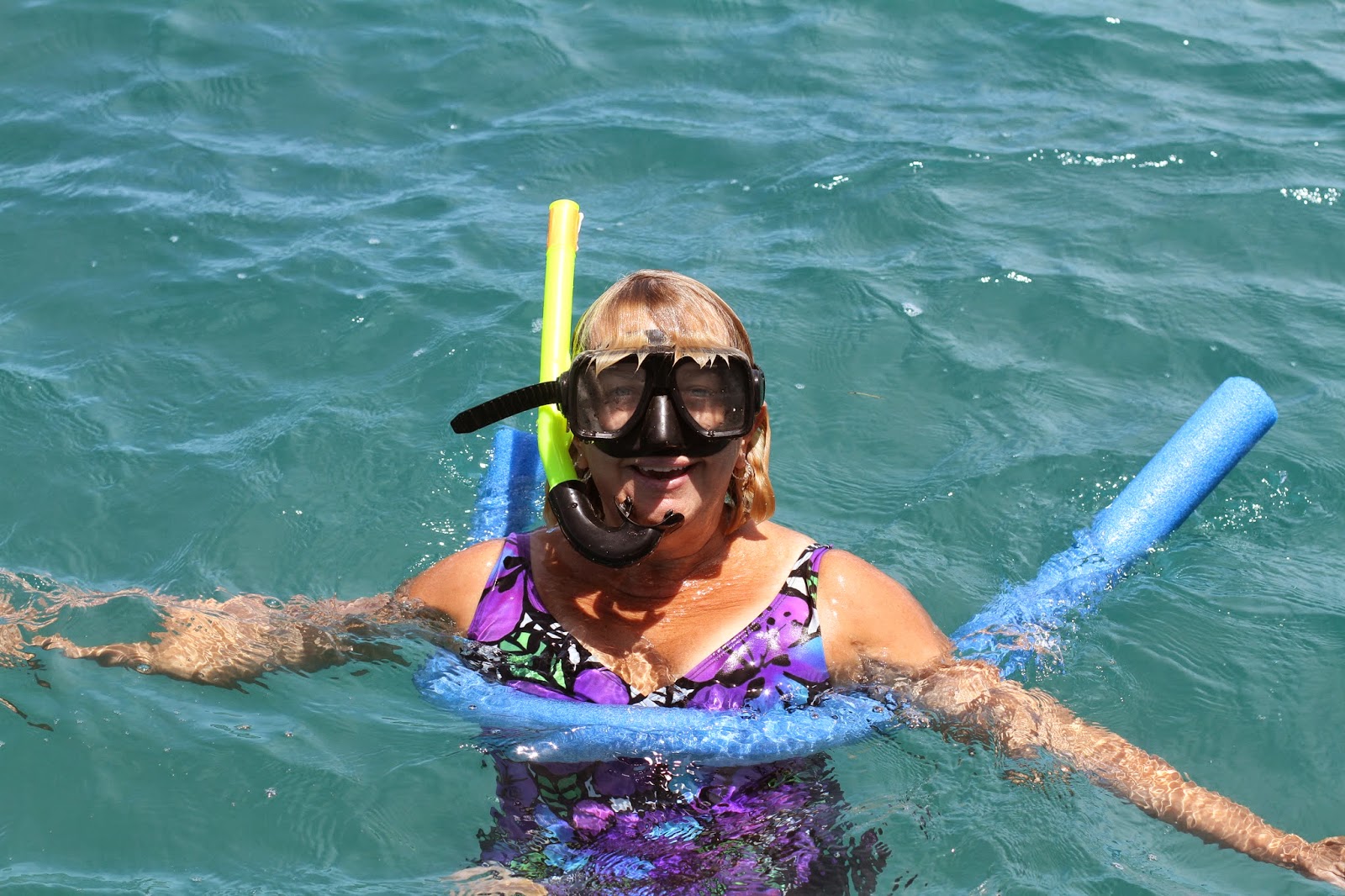 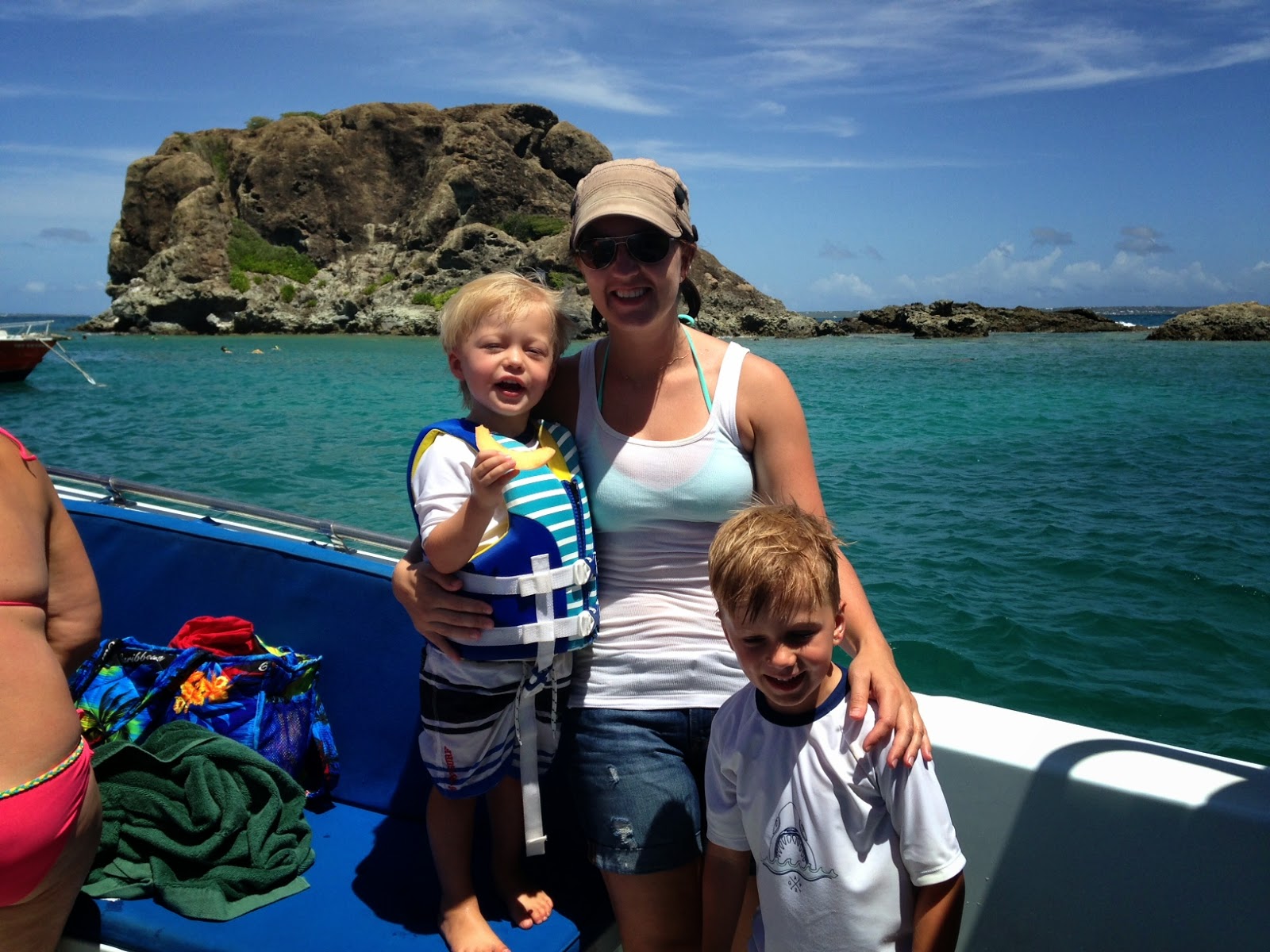 Although the boys and I were in the back were it was probably the smoothest ride, we did get the wettest. Justin and my dad tried blocking the sea water as much as possible and were drenched when we arrived at the second location-Tintamarre Island. This is what sold my mom on the trip. This is where we would be able to swim with sea turtles. Yes. Sea Turtle.  As we arrived they started popping up for air & we were very anxious to get to swim. Our skipper told us they like to sit on the bottom of the ocean which was around 14 ft and eat seaweed and plants like cows eat grass & he couldn't have been more right. It took a little bit of time to spot one but I managed to find one sitting on the ocean floor. I dove down to get a closer look and it was spectacular. As I came back to the top and found another on the bottom of the ocean one swam right next to me and came up for air. It scared me and I flipped my head around and inhaled a ton of water. Still one of the coolest things I have experienced. 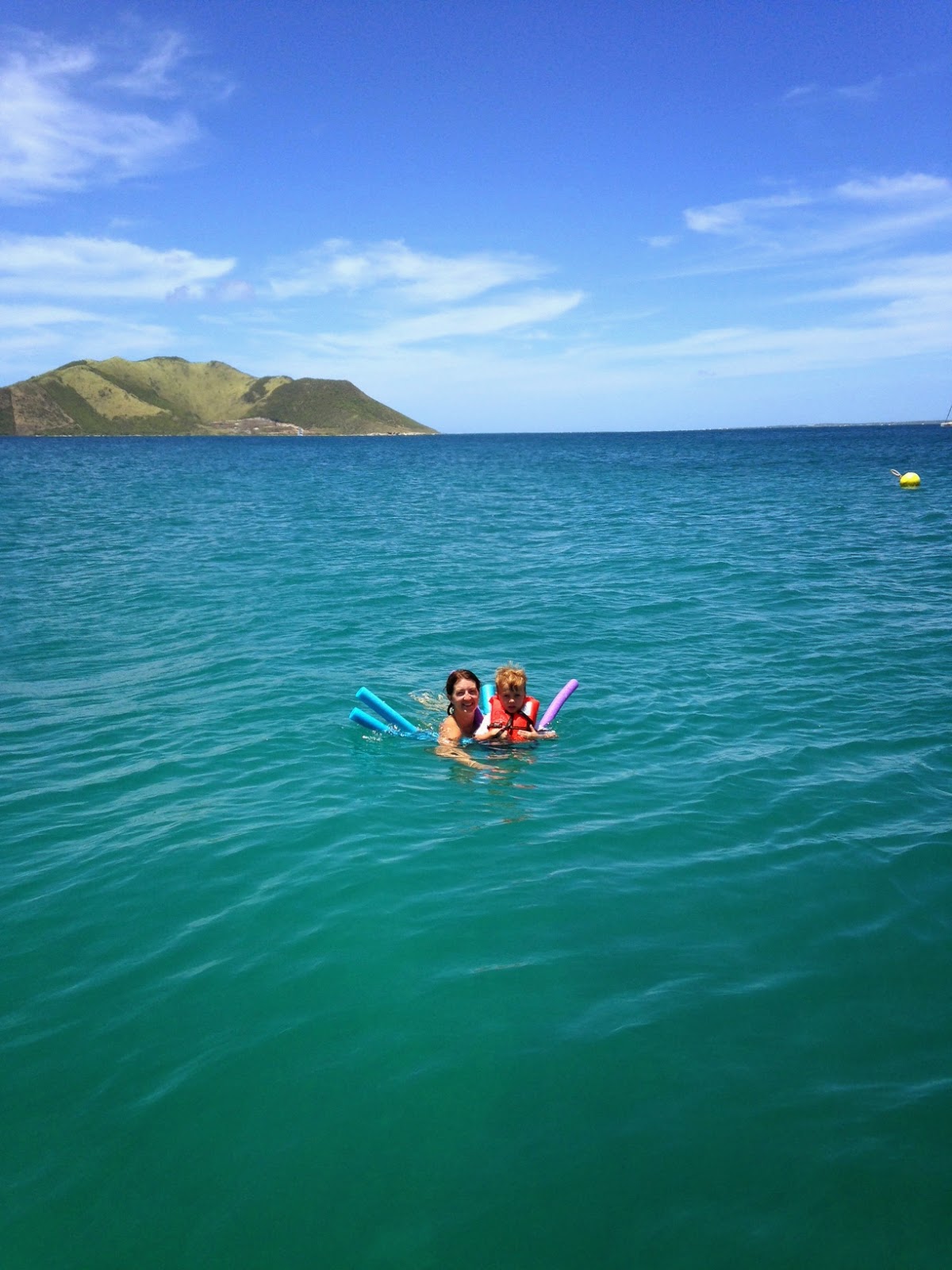 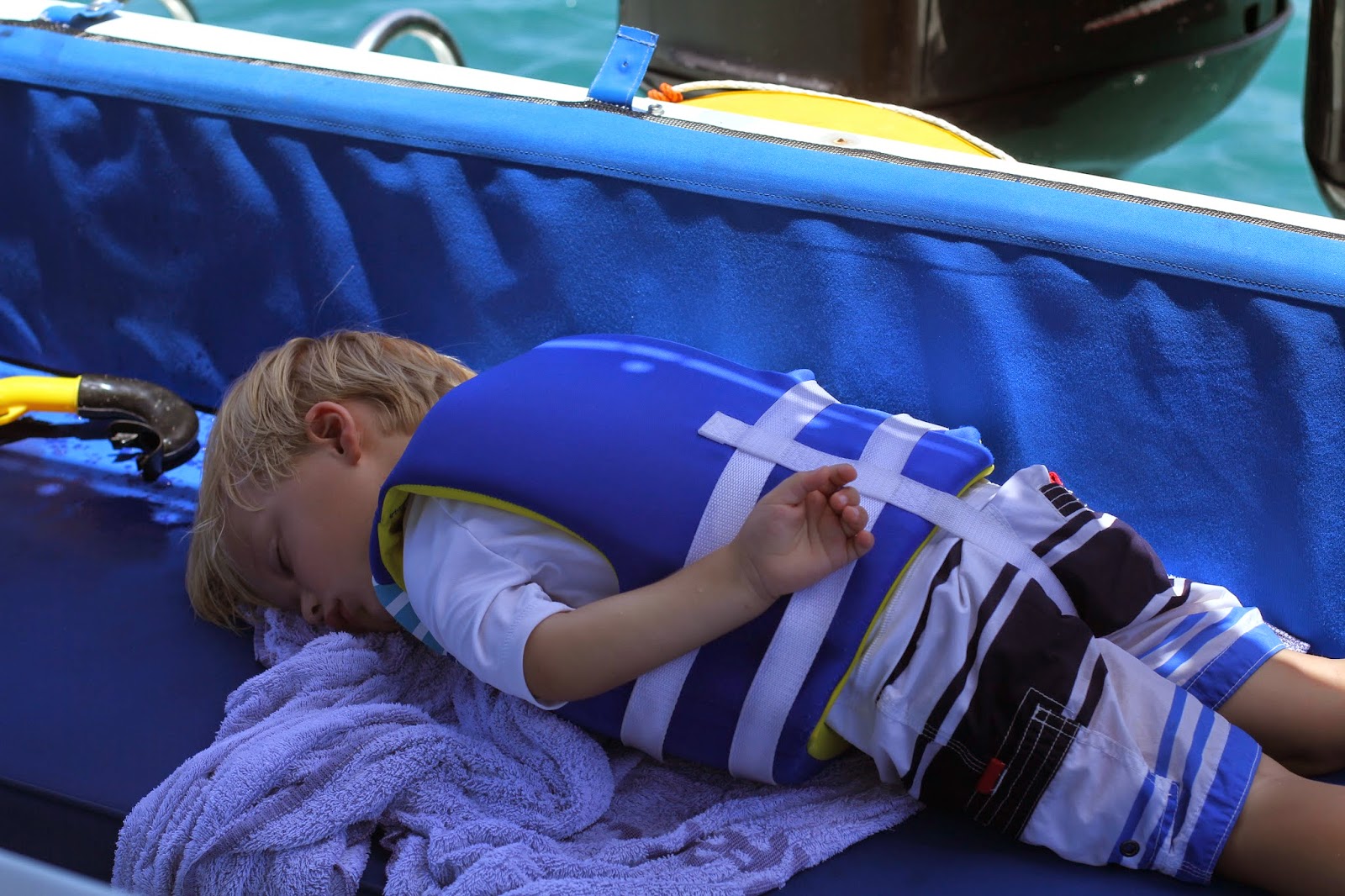 Up next was an island Justin, Janet, the boys and I were already familiar with--Pinel Island. Two years before we visited this island on Becky's birthday. This time we anchored our boat, walked up to some shade to eat and our Skipper started calling out to his friends. With in a matter of minutes iguanas were EVERYWHERE. & he was able to point out which iguanas were nice and which ones were "RUDE". We eventually hand-fed a few of them and a couple even allowed us to pet them like cats. It was pretty crazy. 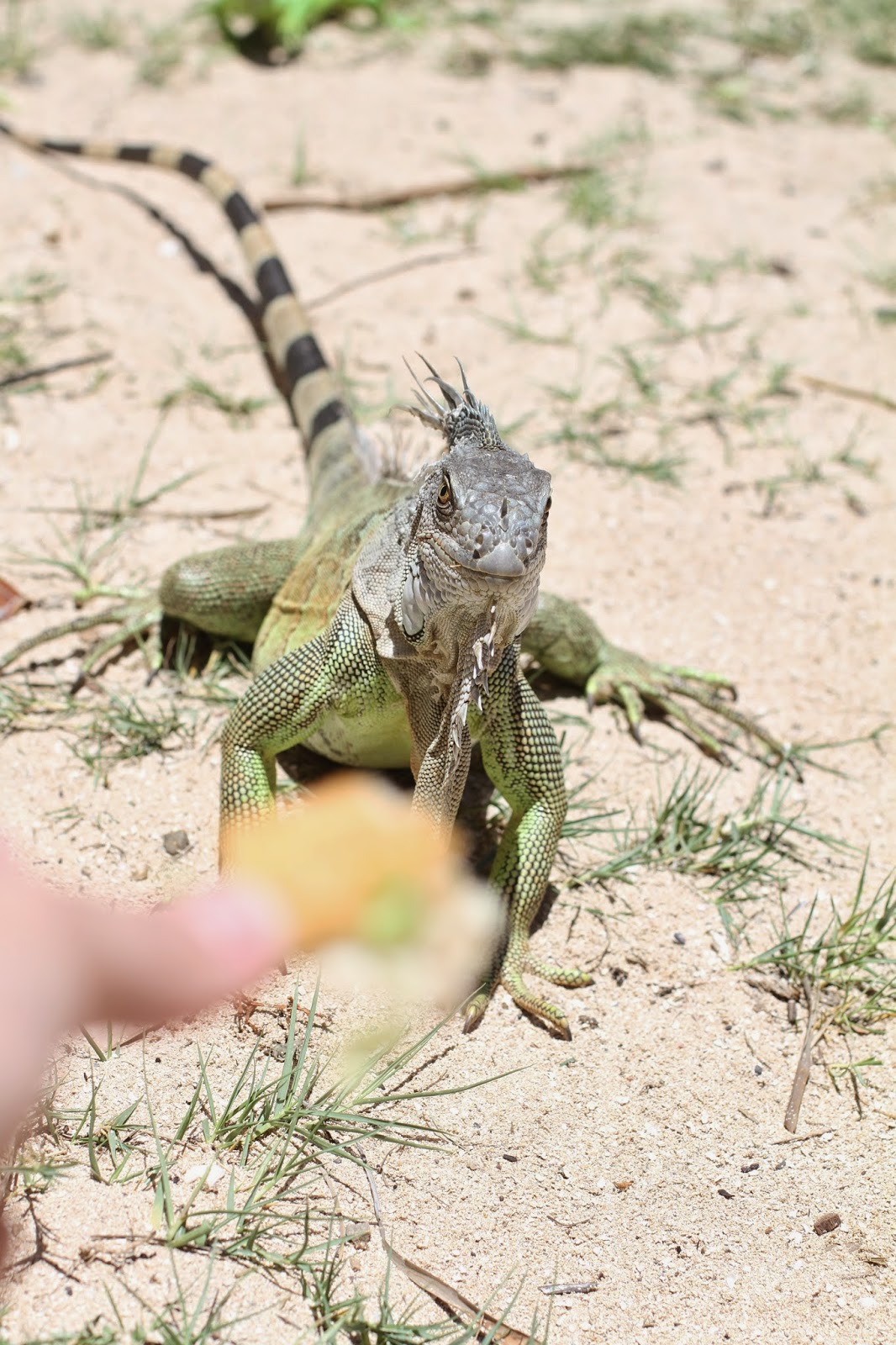 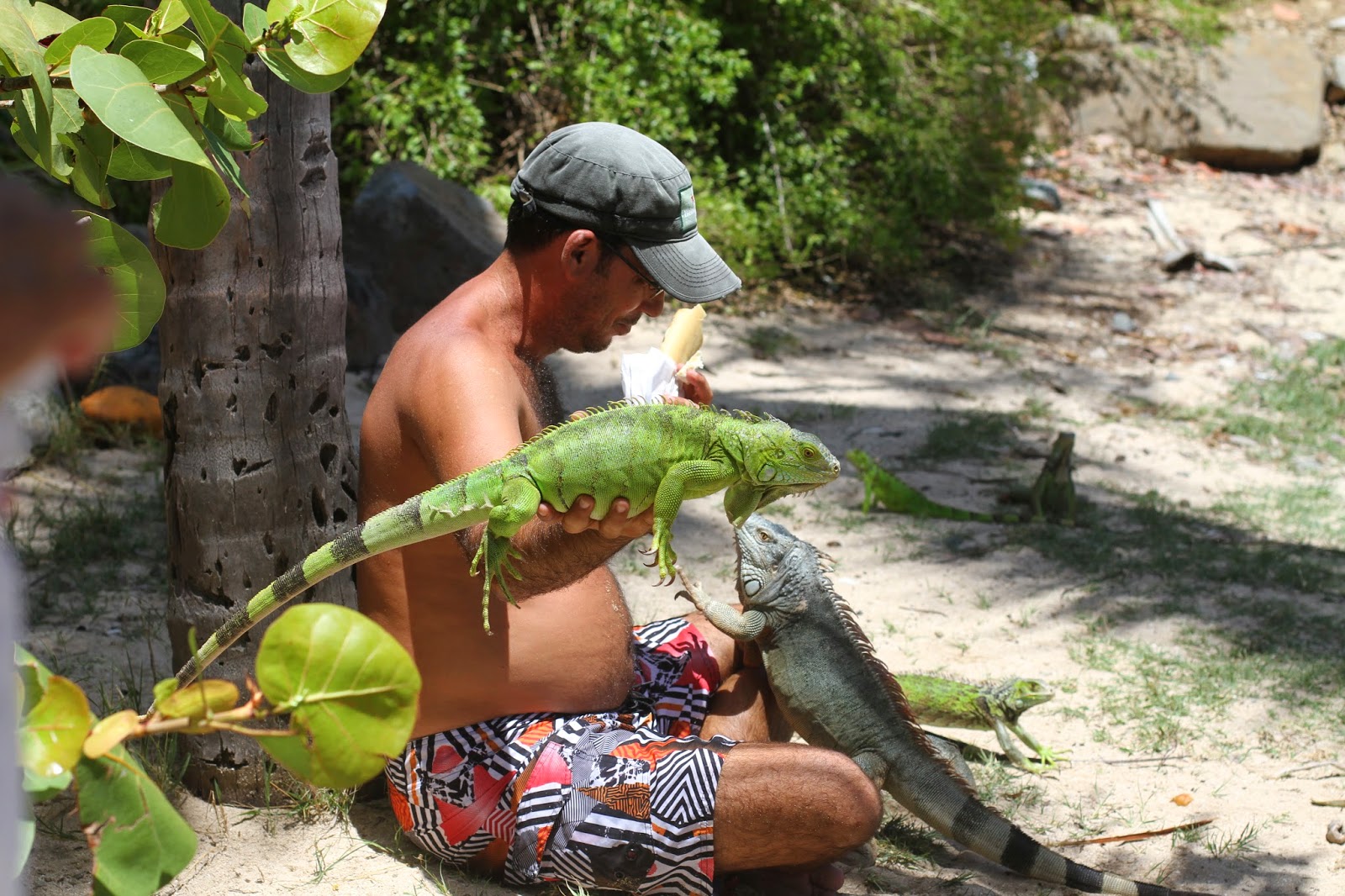 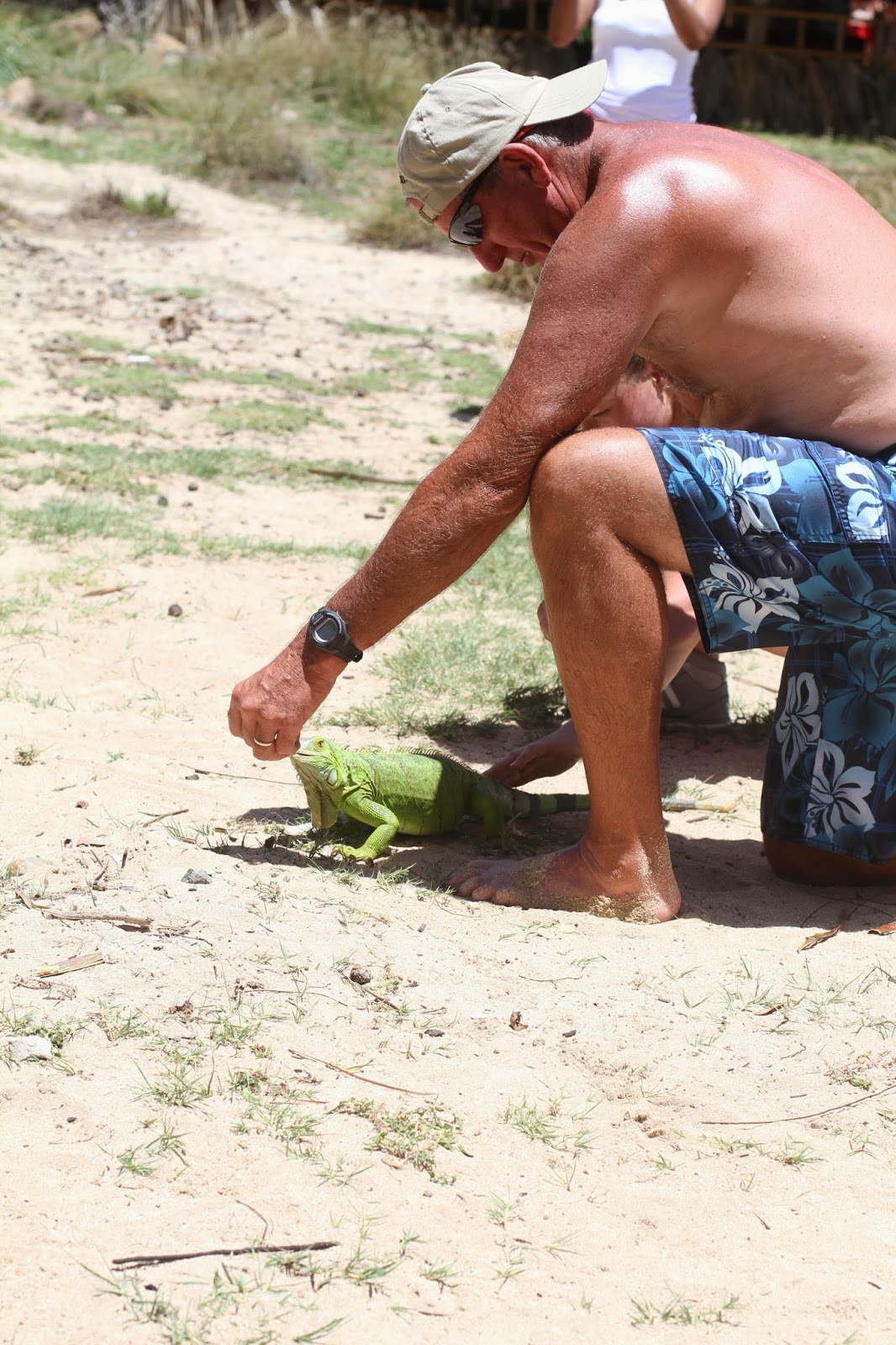 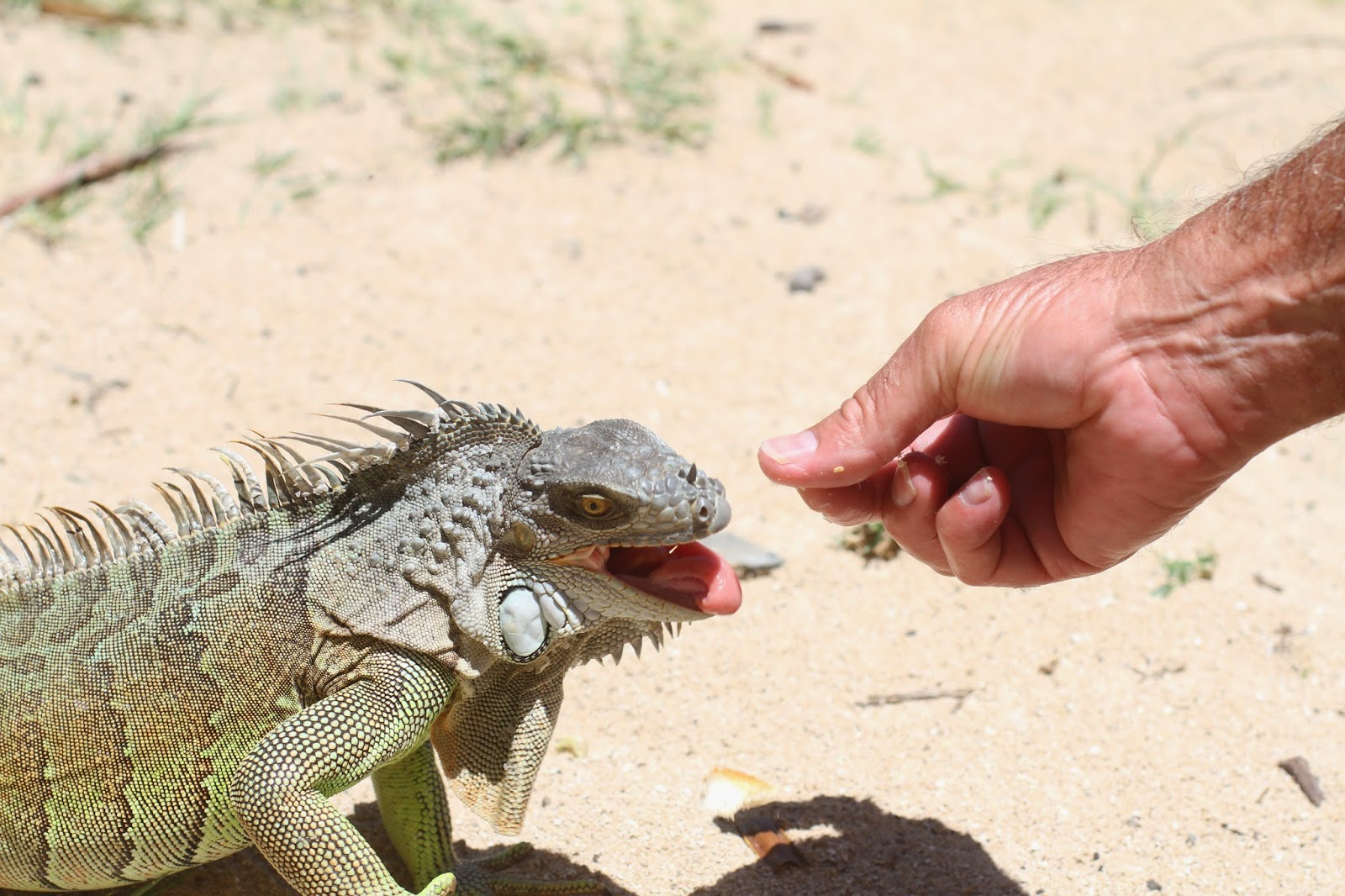 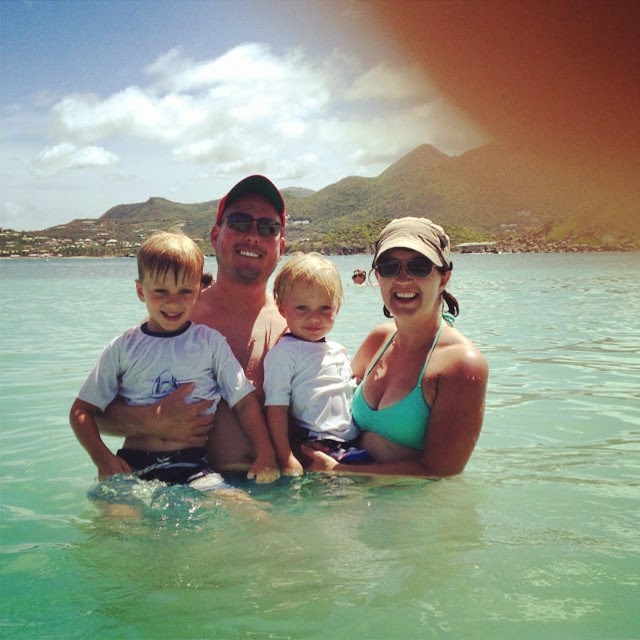 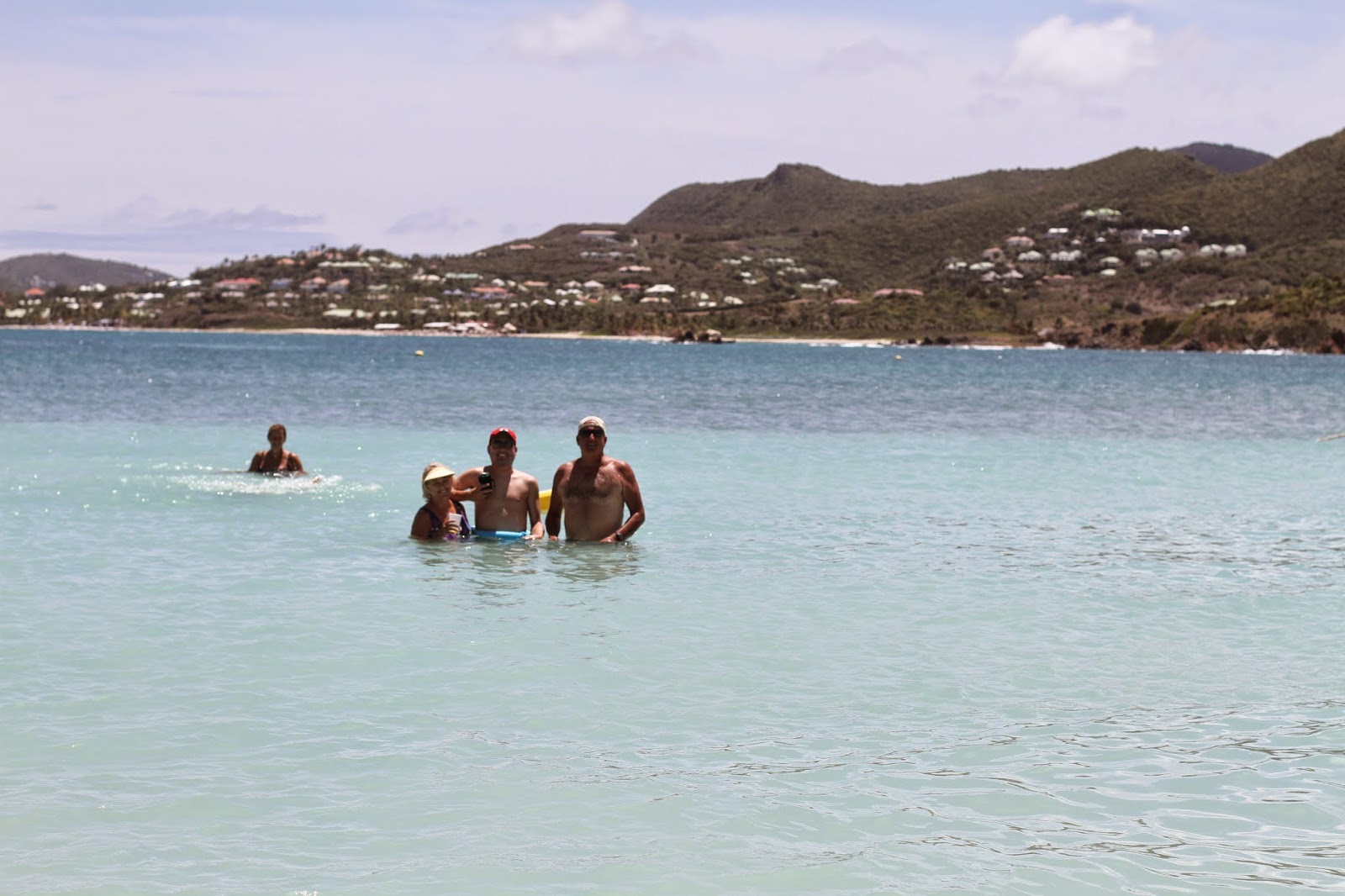 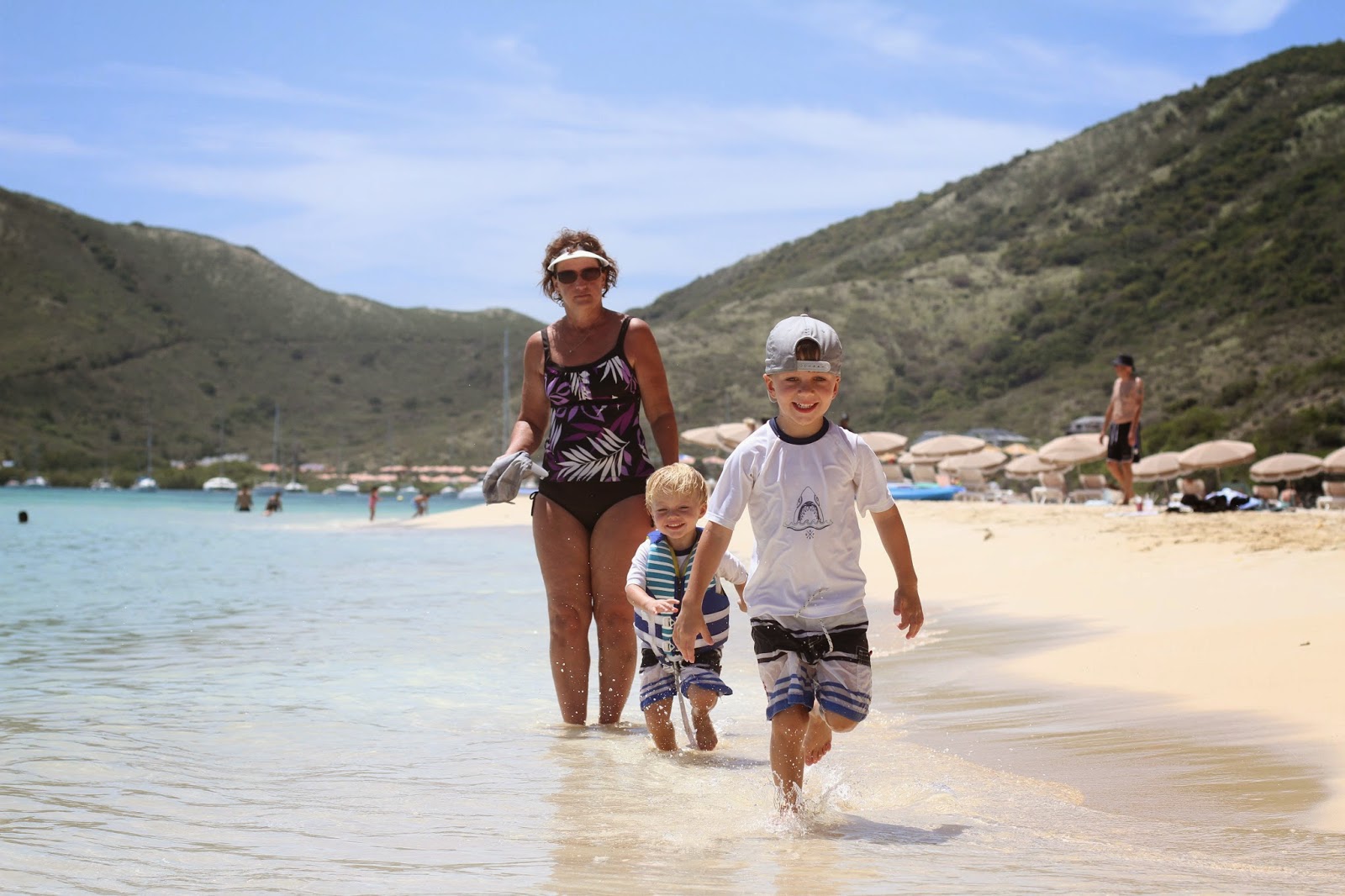 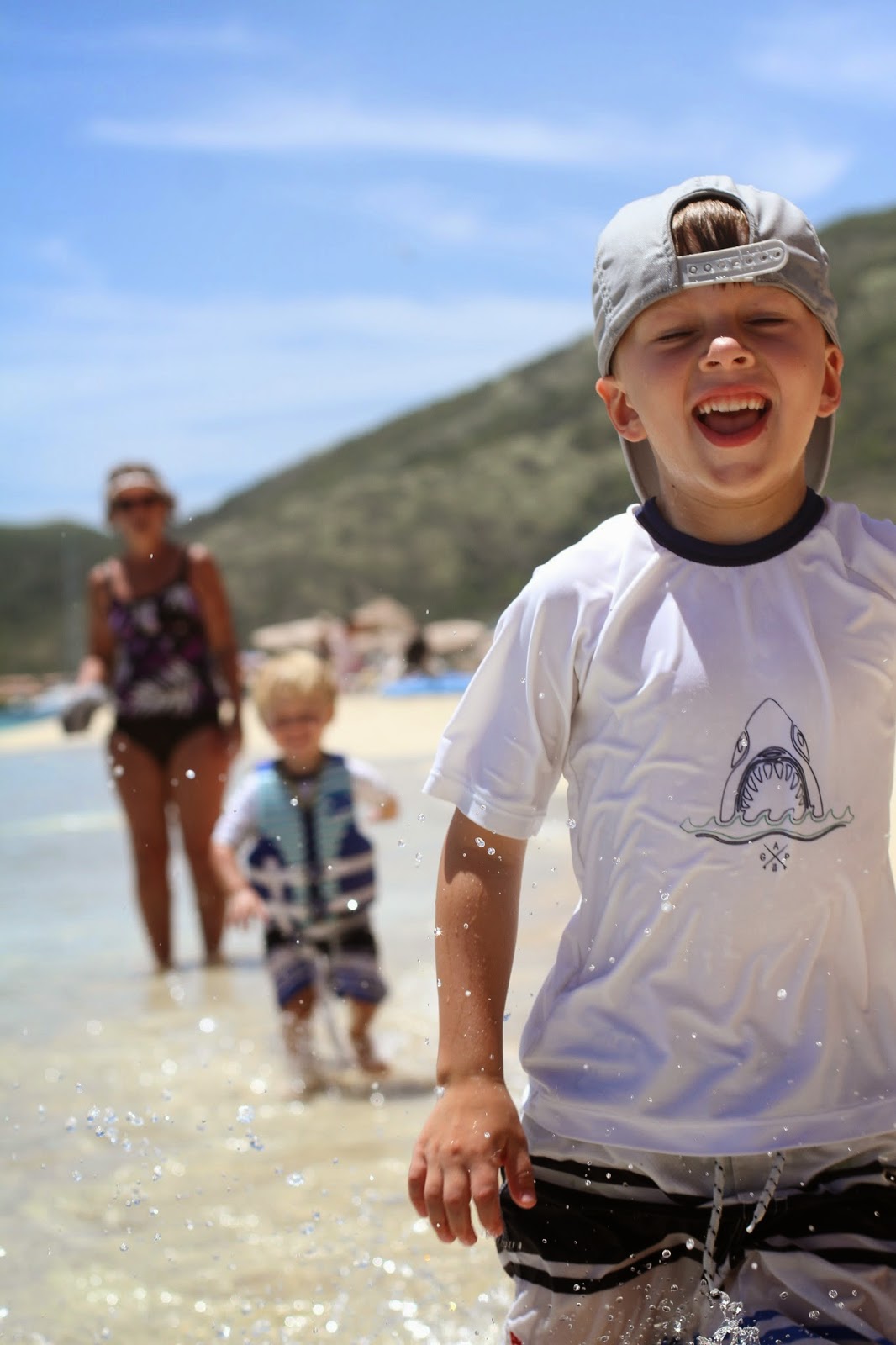 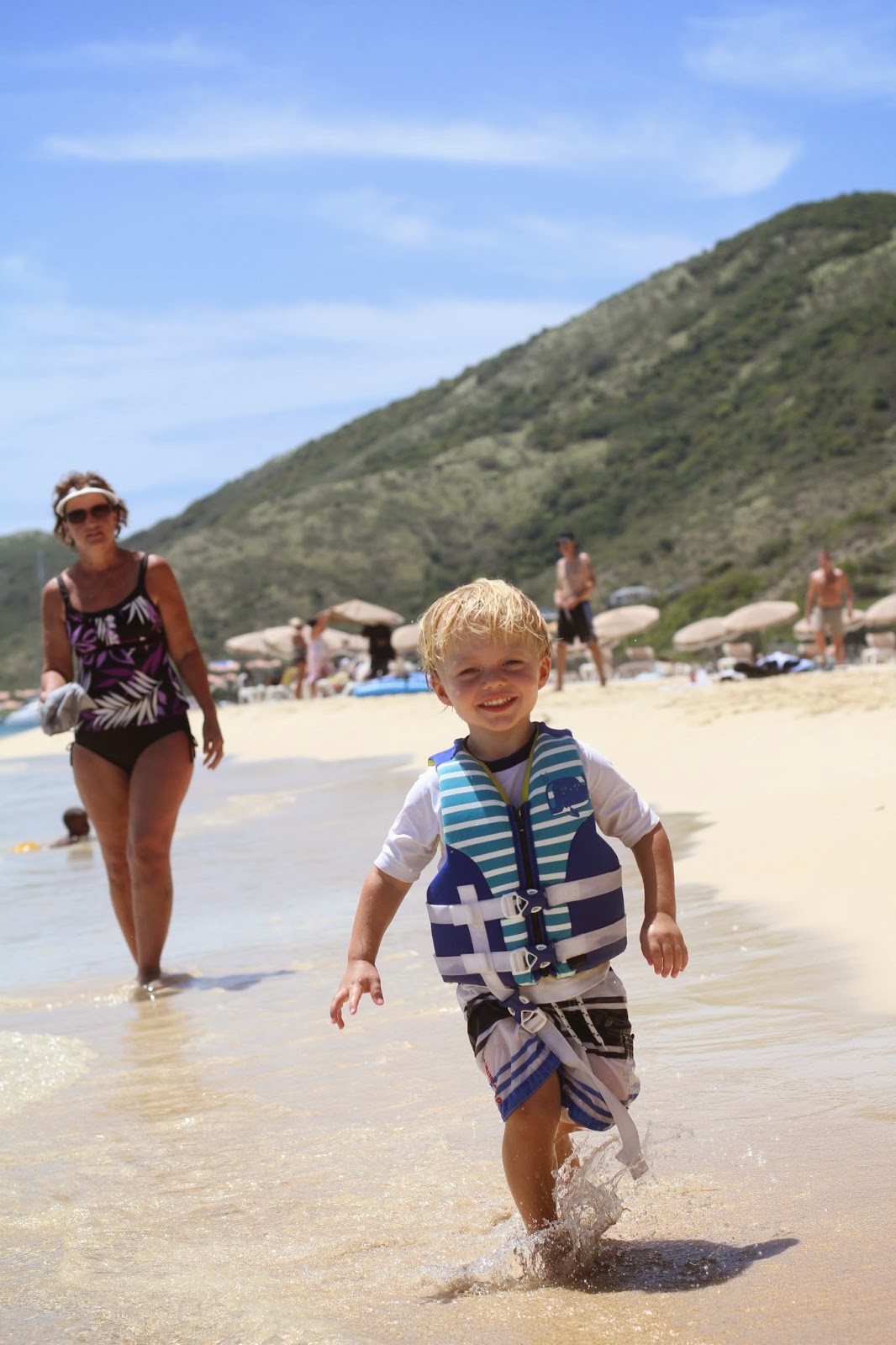 While on Pinel Island we took the boys back to the same driftwood from two years ago for a few pictures & on the way back they decided they wanted to run the length of the boardwalk & run they did. 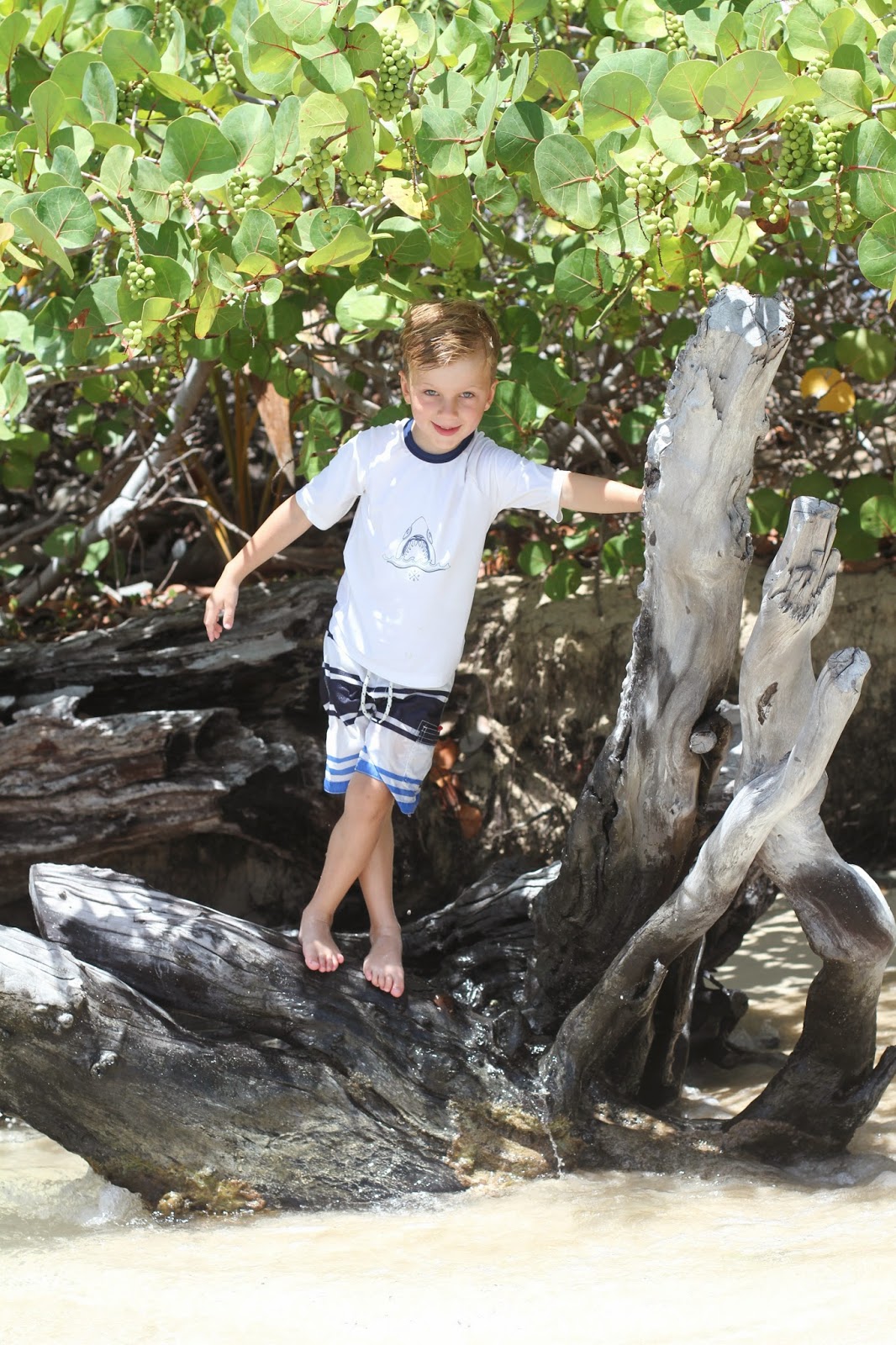 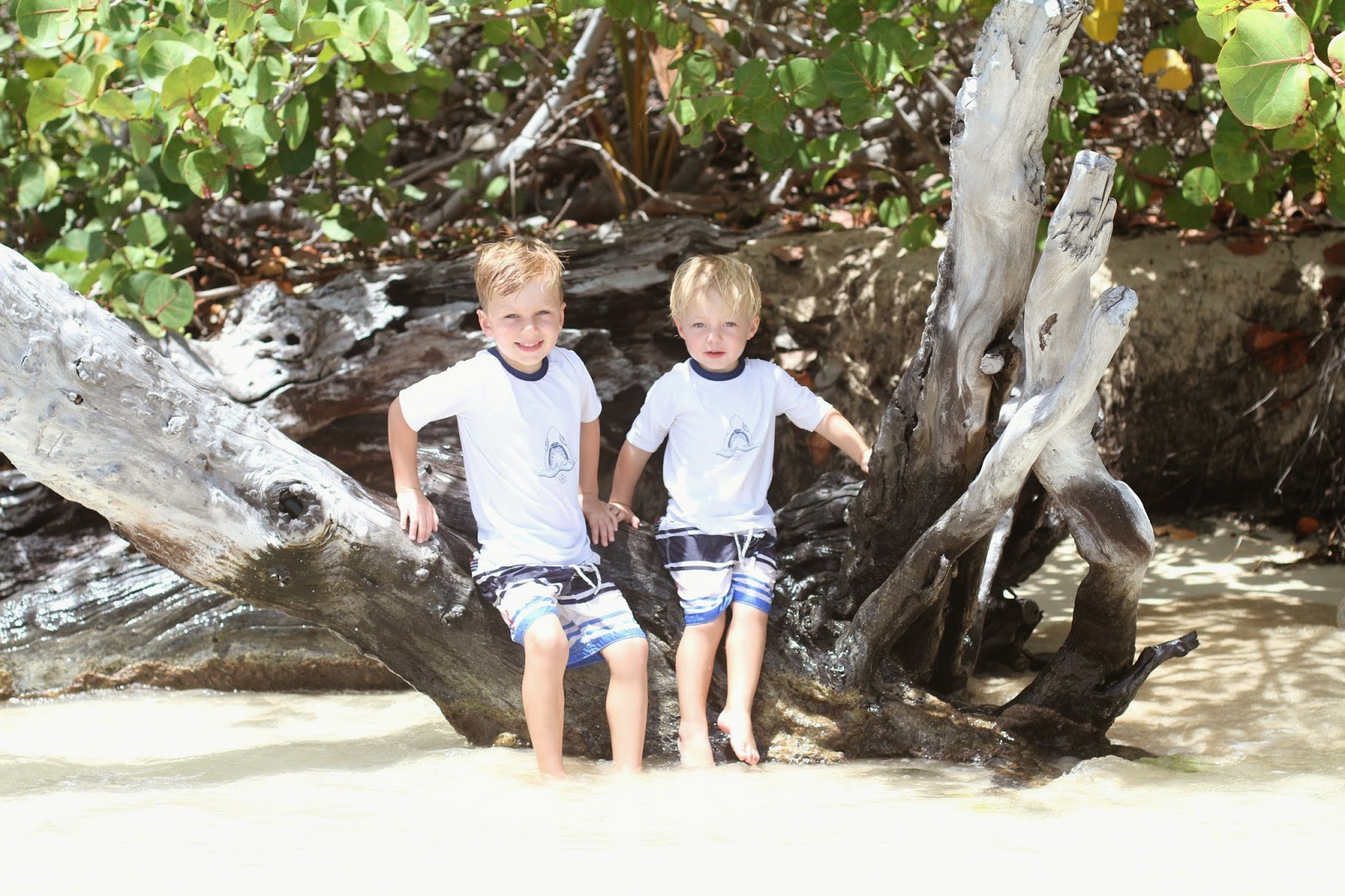 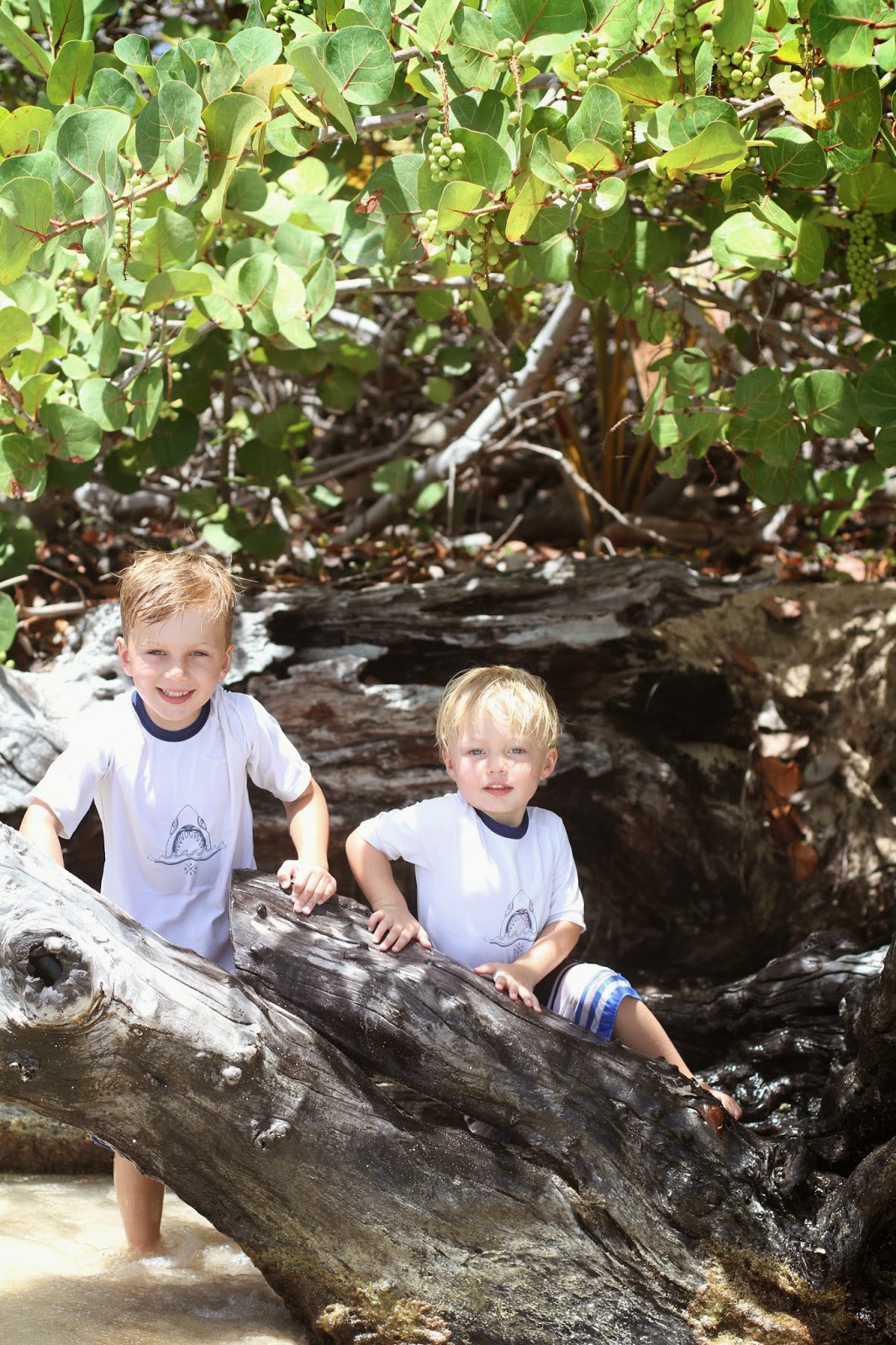 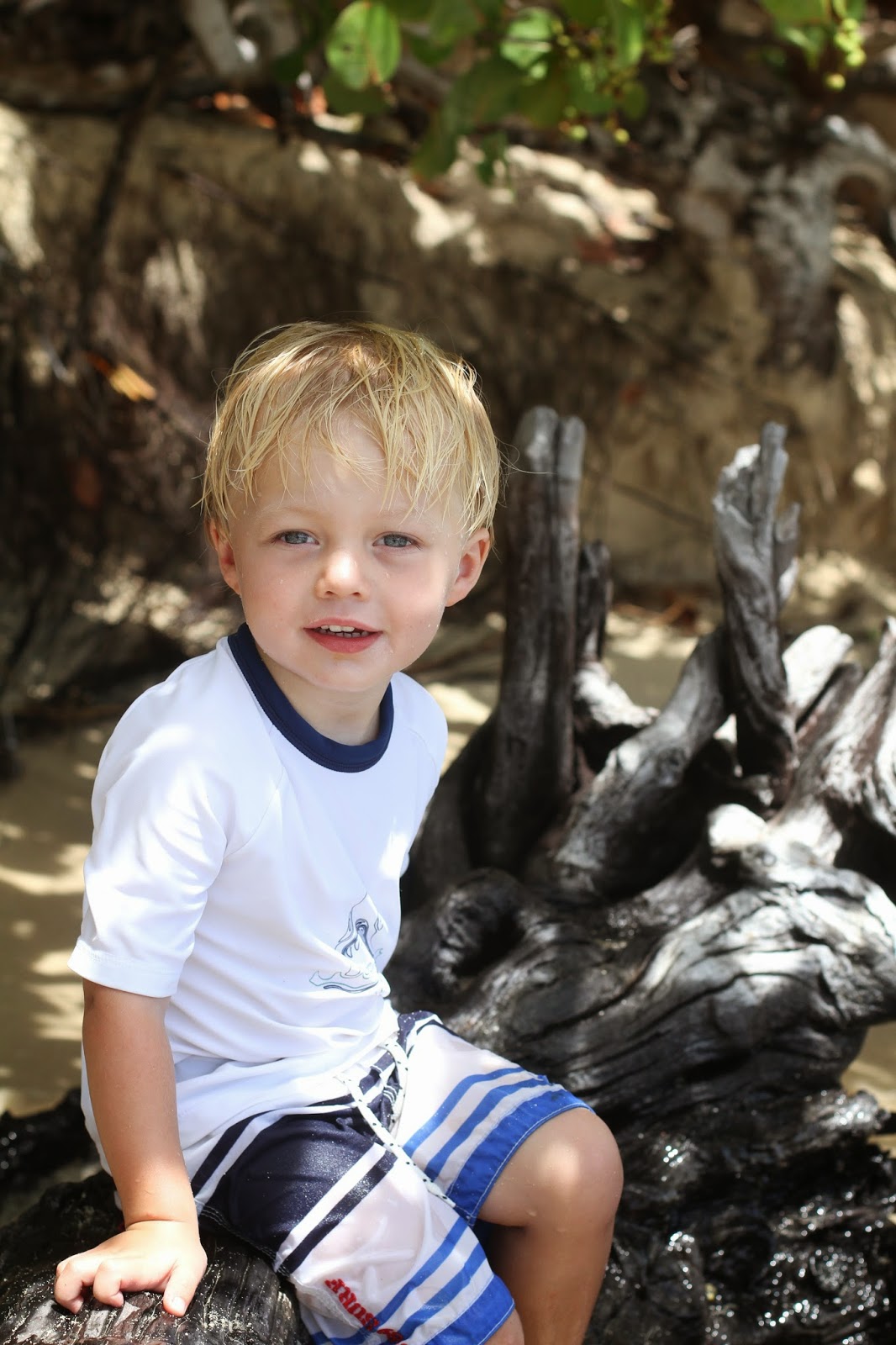 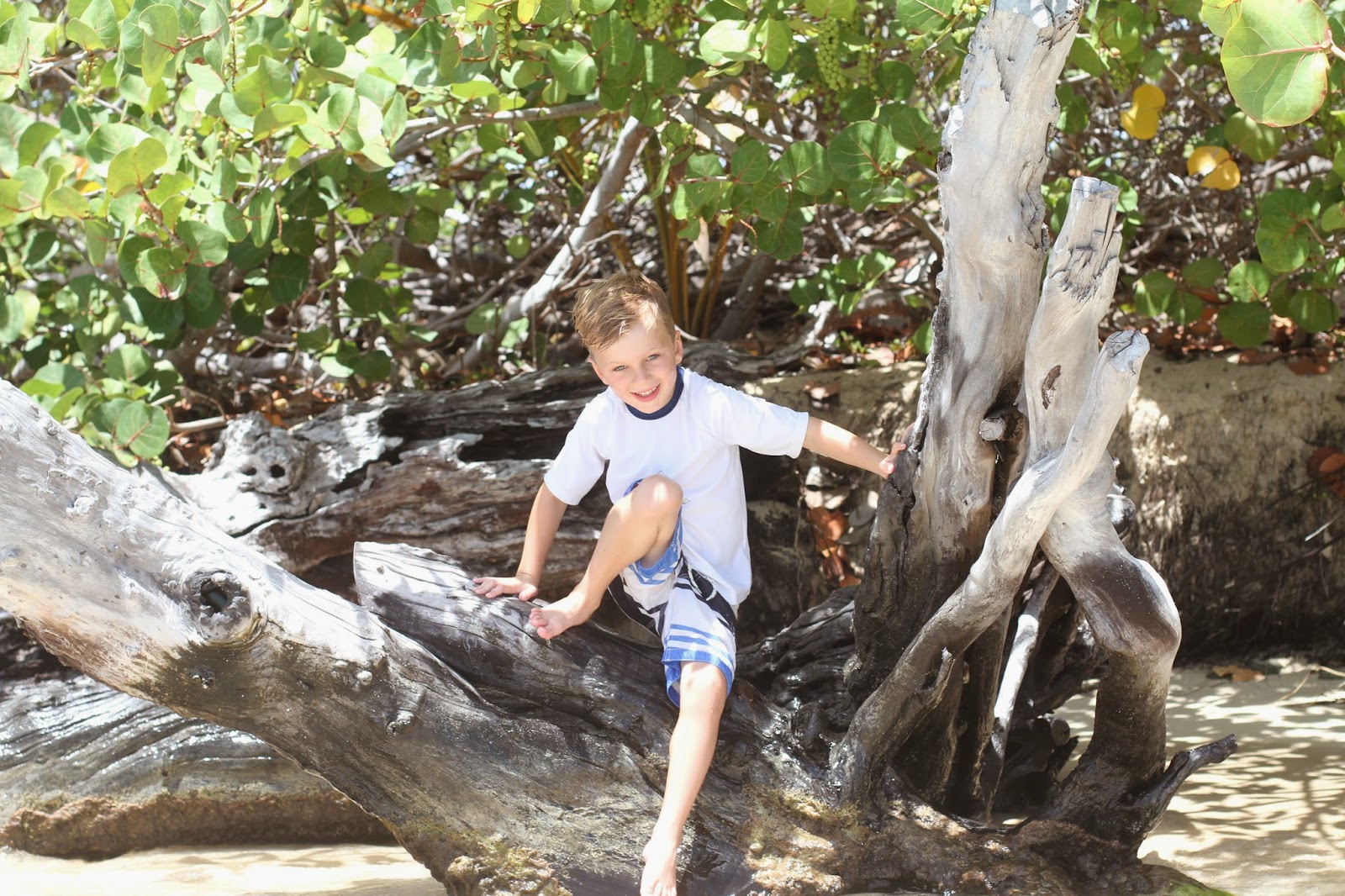 We had one final stop as we made our way back around to our starting point on the south of the island. We stopped at Happy Bay Beach. This beach was pretty interesting because cows--all shapes and sizes--were sharing the beach with us. This was also the place where we were tasked to find sand dollars. I'm pretty competitive so of course I had to find one---I looked and looked and finally something white. I went down and crushed it as soon as I touched it. A few minutes later I found another and it crushed as I handed it to my mom. Our skipper, he found 6 within 10 minutes all of which were three times the size I found and he didn't break a one! I swear he had them stashed in his pocket and pulled them out and acted as though he found them. 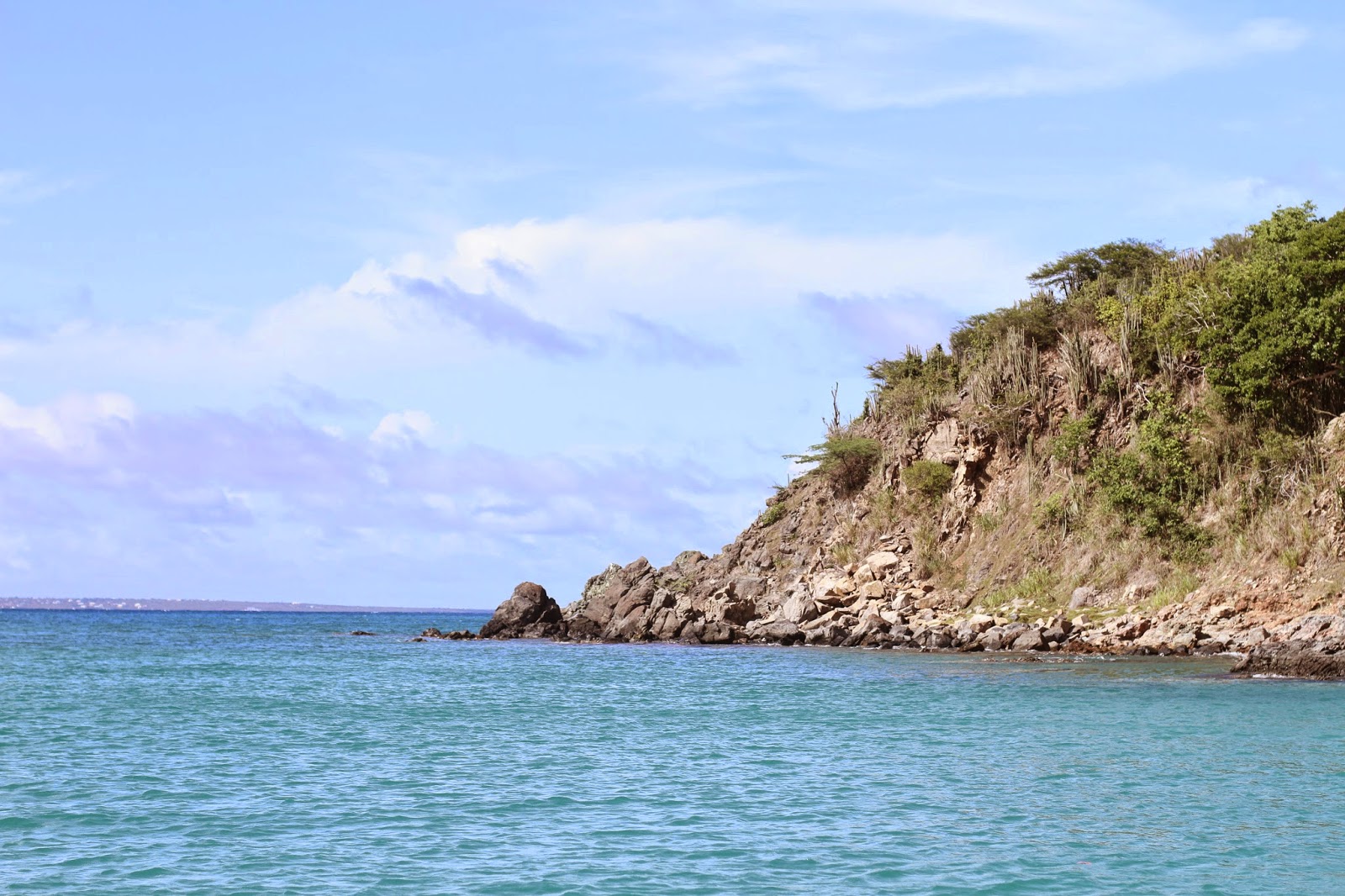 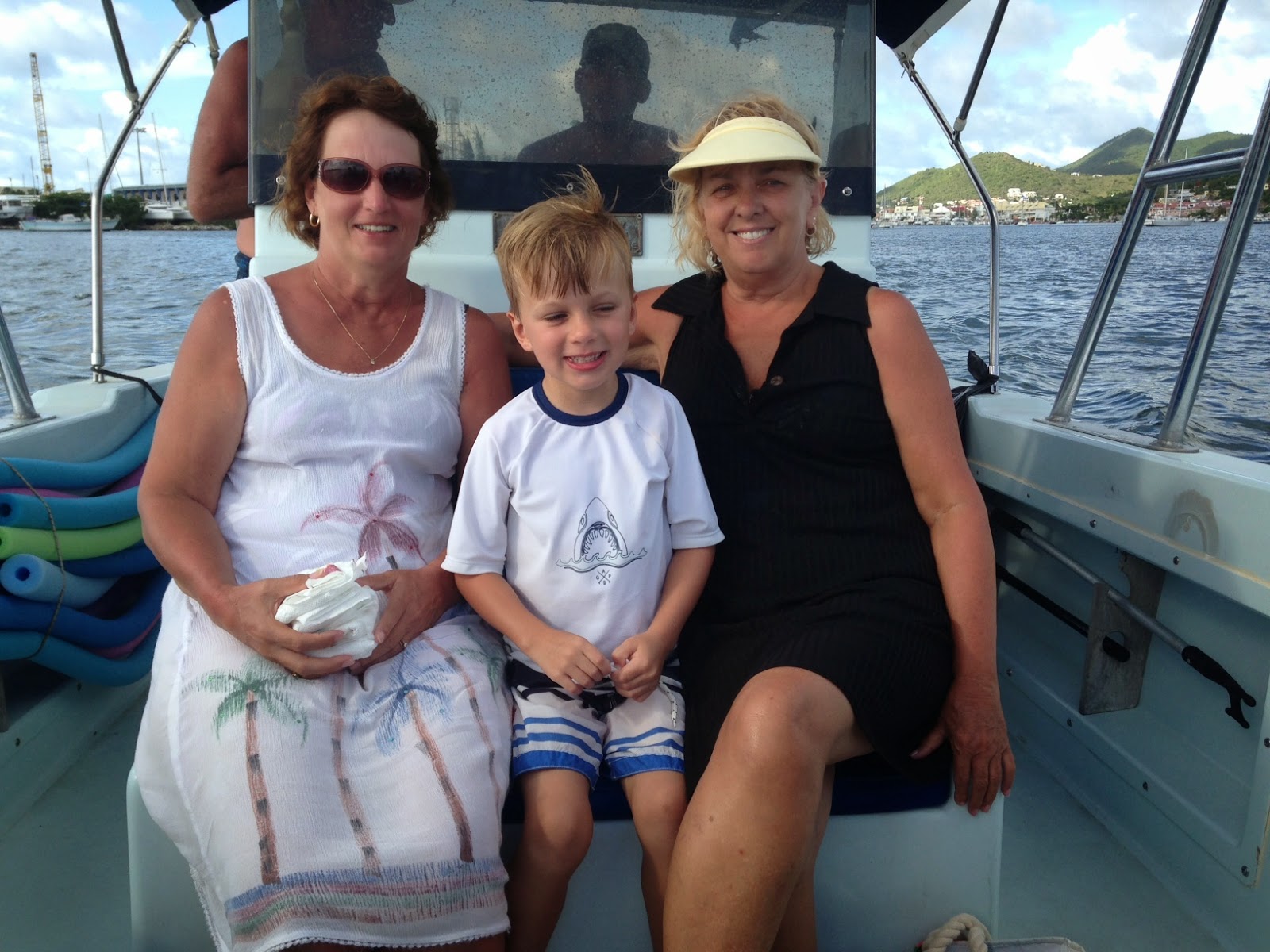 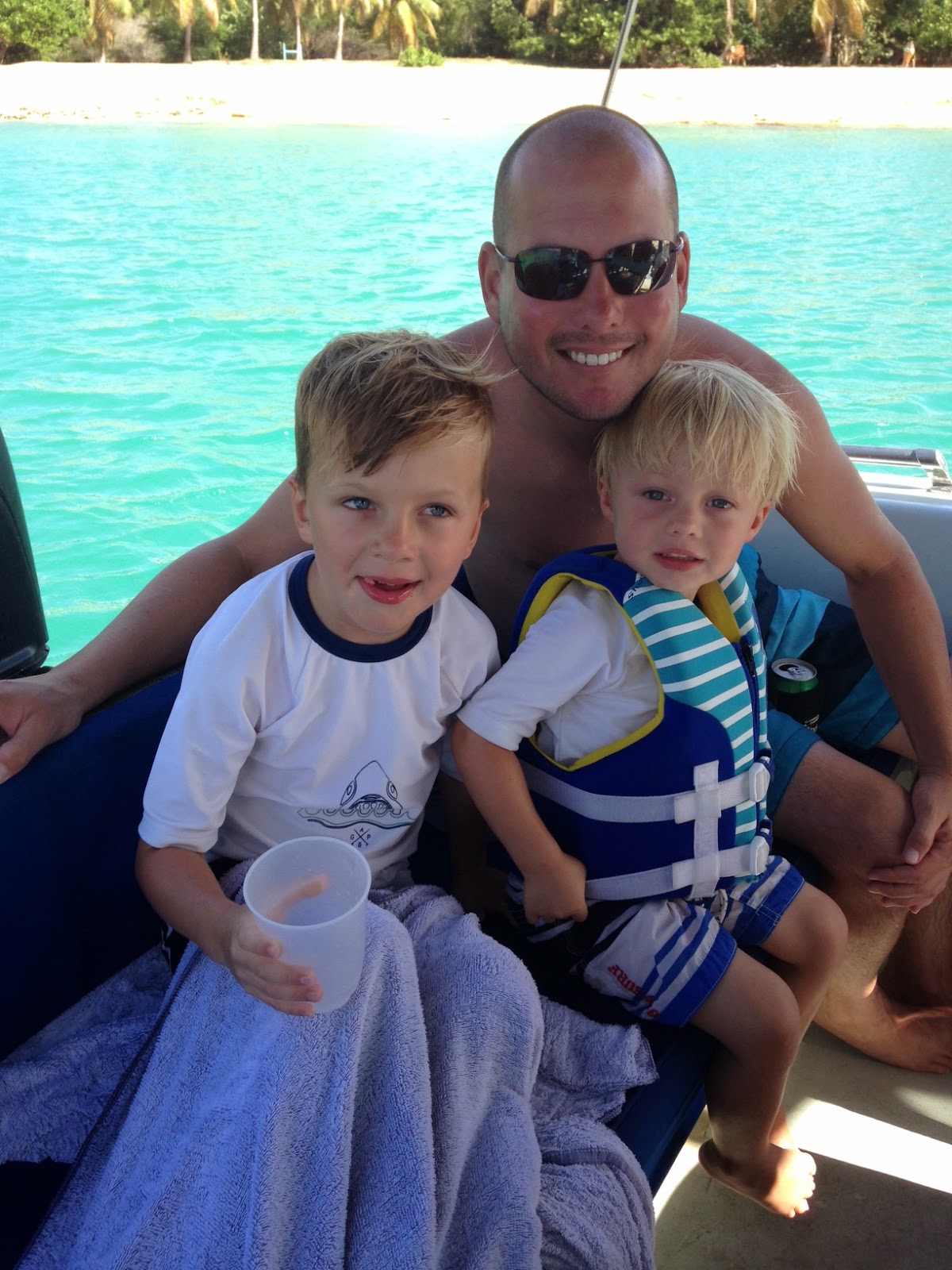 Our adventure was done, we were headed back to dock the boat but the boys got one last adventure, they got to drive the boat. Meechele made the boys' day when he asked if they wanted to drive. And Justin and I couldn't help but smile at each other as we leaned in, kissed & agreed that this was one the best days we had ever had. 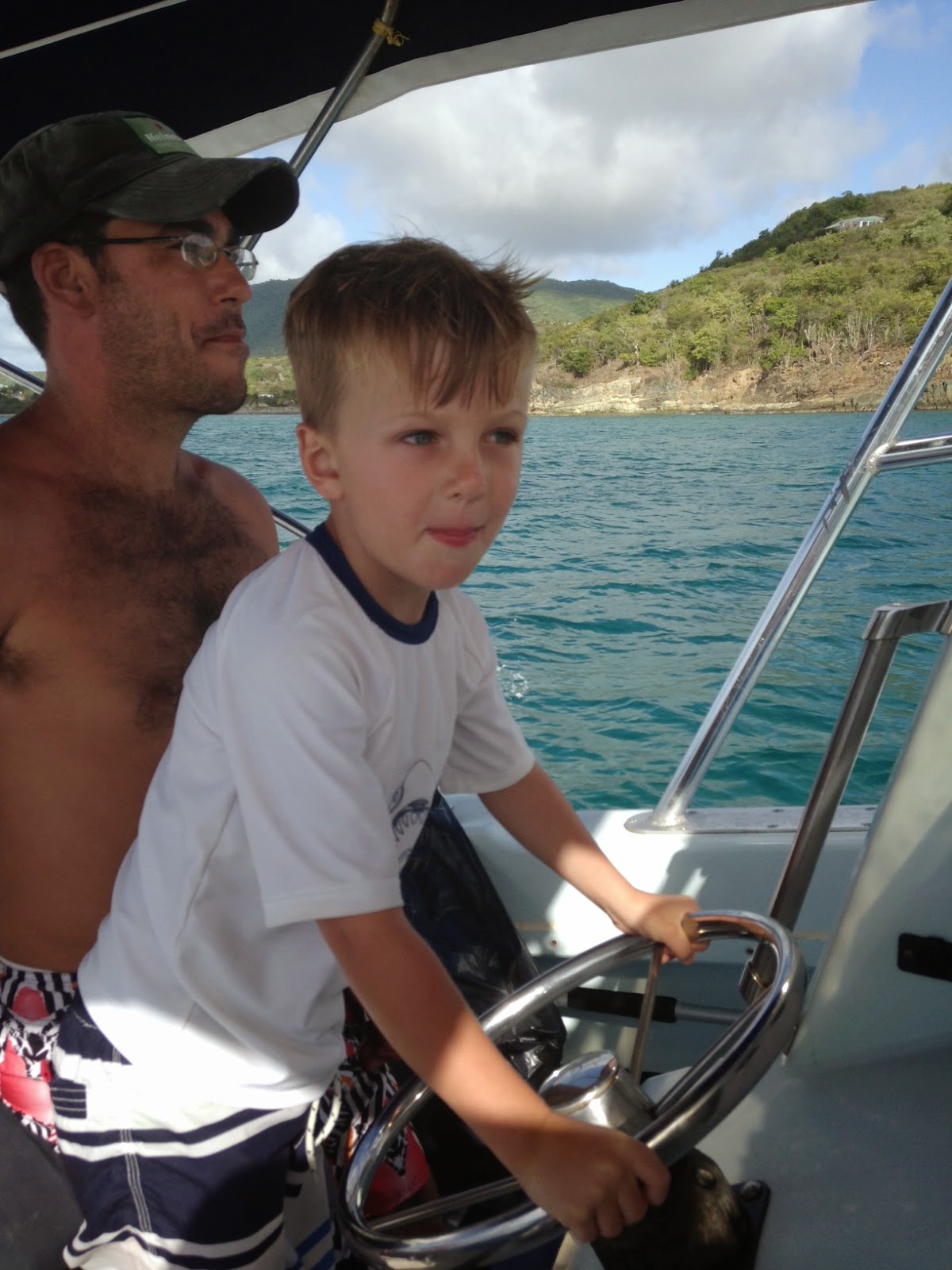 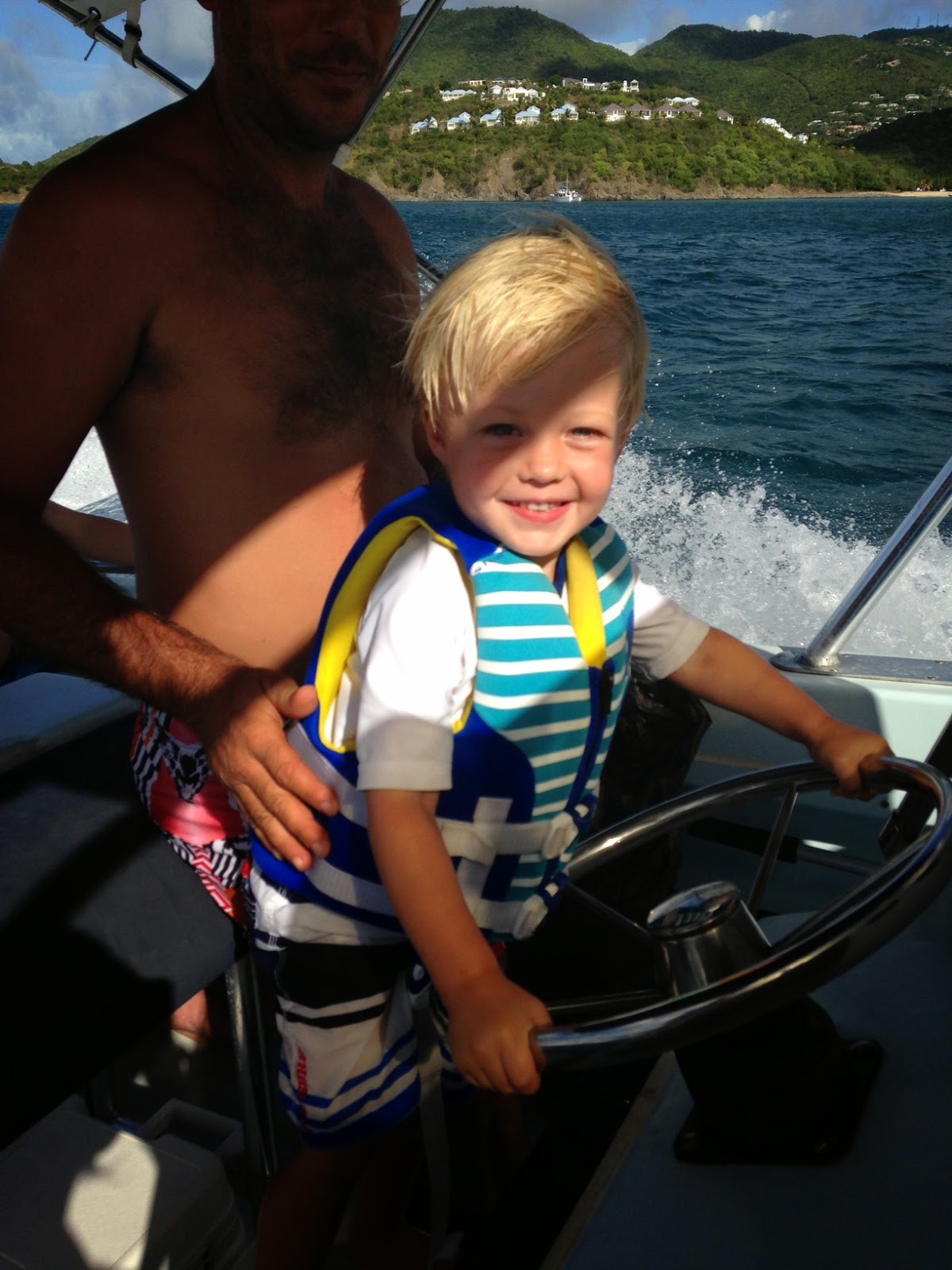