The Boys' First Trip to the Pond

This past weekend was filled with so much fun. We celebrated a very special 2nd birthday--still to be documented. I got to photograph my best friend from high school oldest nephew's senior pictures. (Did you get that!) We got to kick back and enjoy the last few days of AMAZING July weather and we got to take the boys FISHING for the first time.

Middle of last week I called my mom up and mentioned the idea of taking the boys fishing, especially if it was so nice. She had already mentioned it to my dad but he was thinking that swimming would be more fun. Mom went ahead and bought the boys poles--Spider Man poles. We were going fishing.

We told the boys they had to take a good nap because we had a surprise for them when they woke up. & they must have been excited for their surprise because they were out as soon as their little heads hit their pillows. They both woke up asking what the surprise was so my mom went to the closet, told them to hide their eyes & brought out the poles.

Kaden: "WOW, a fishing pole. & it's Spiderman. This is awesome. Thanks Grandma." 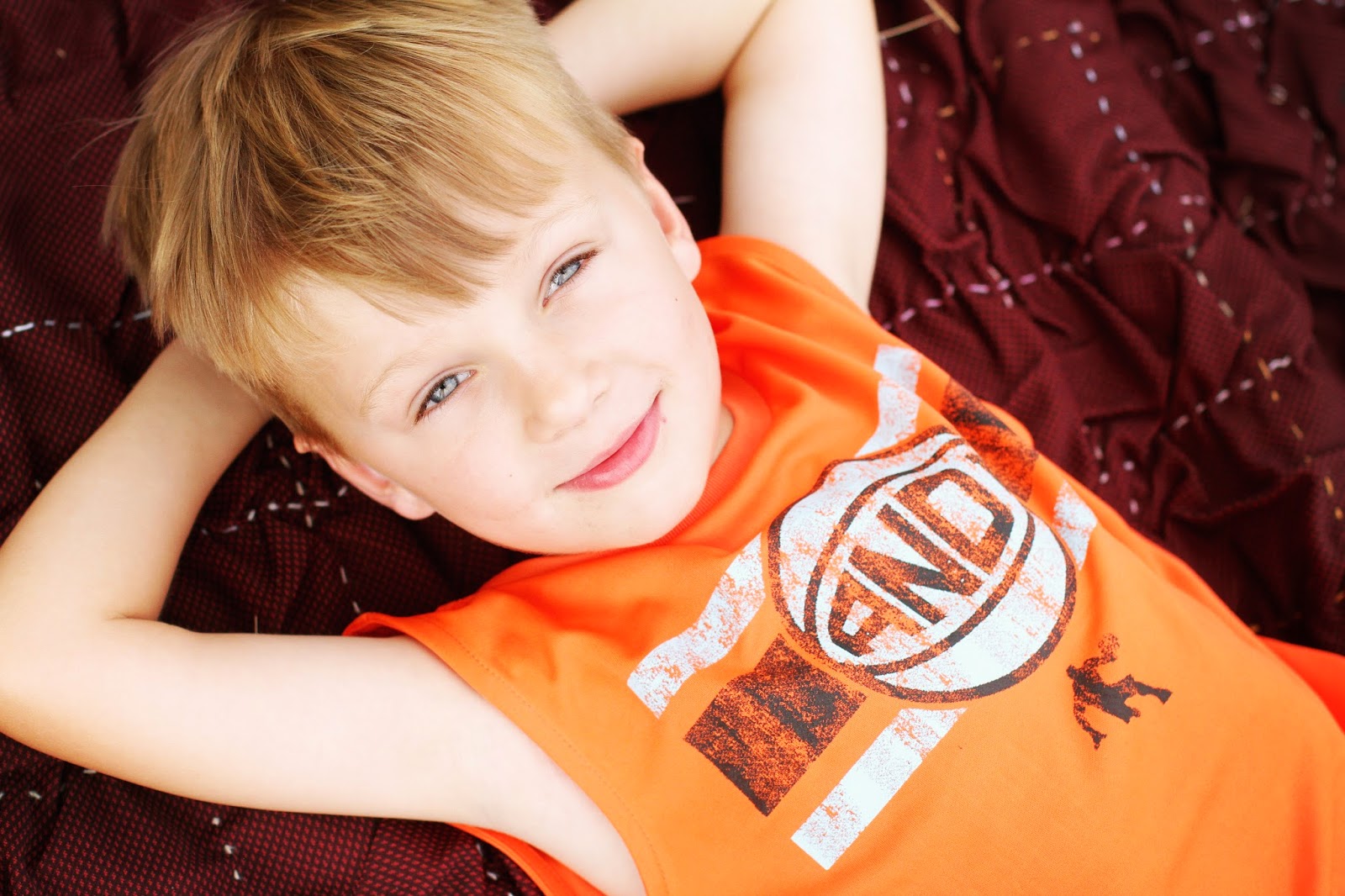 Logan: "I think I want one of those." which was followed the most adorable chuckle as Grandma Sara gave him his pole. 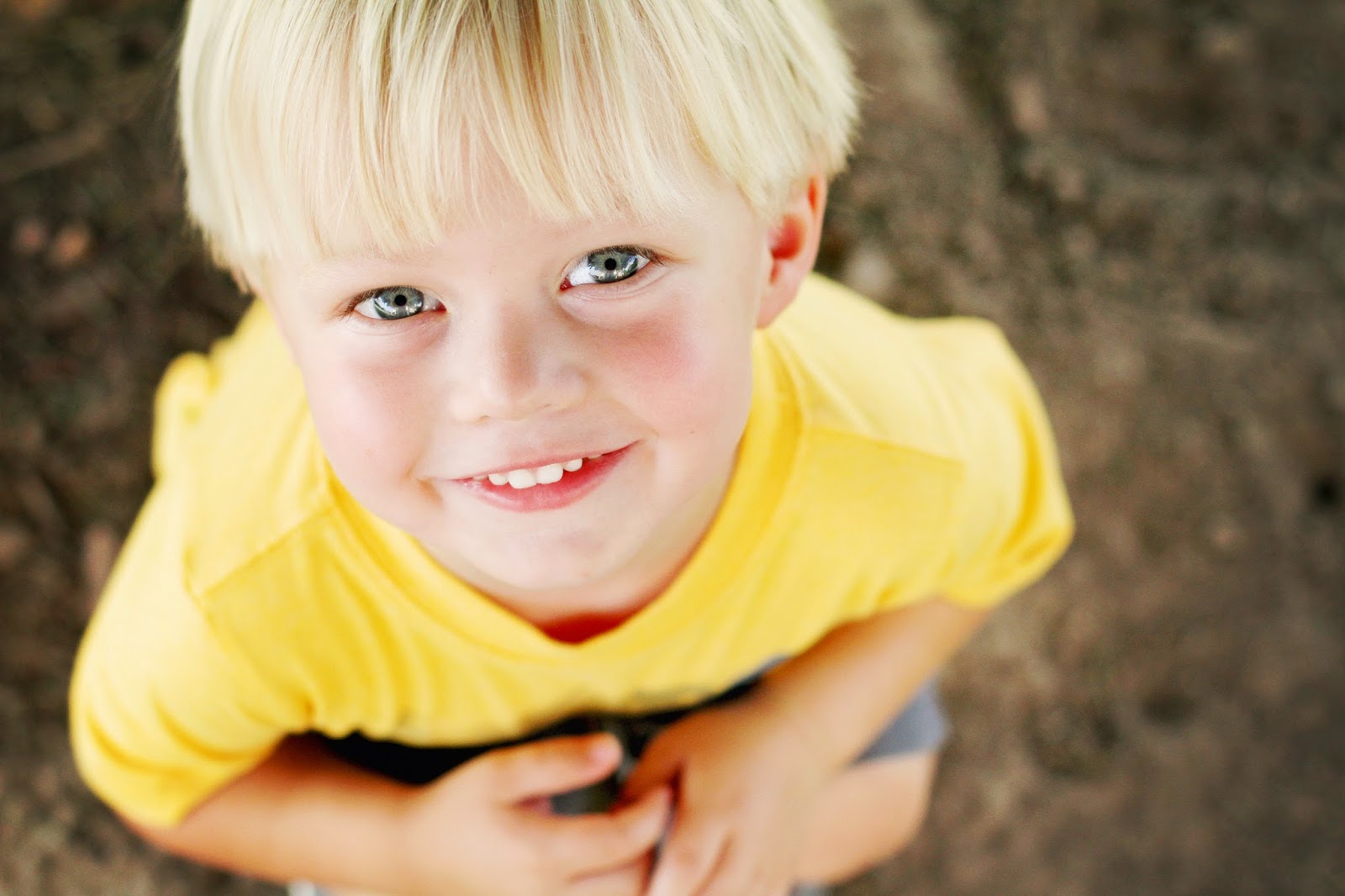 Now it was Papa's turn, the poles needed hooks and bobbers. 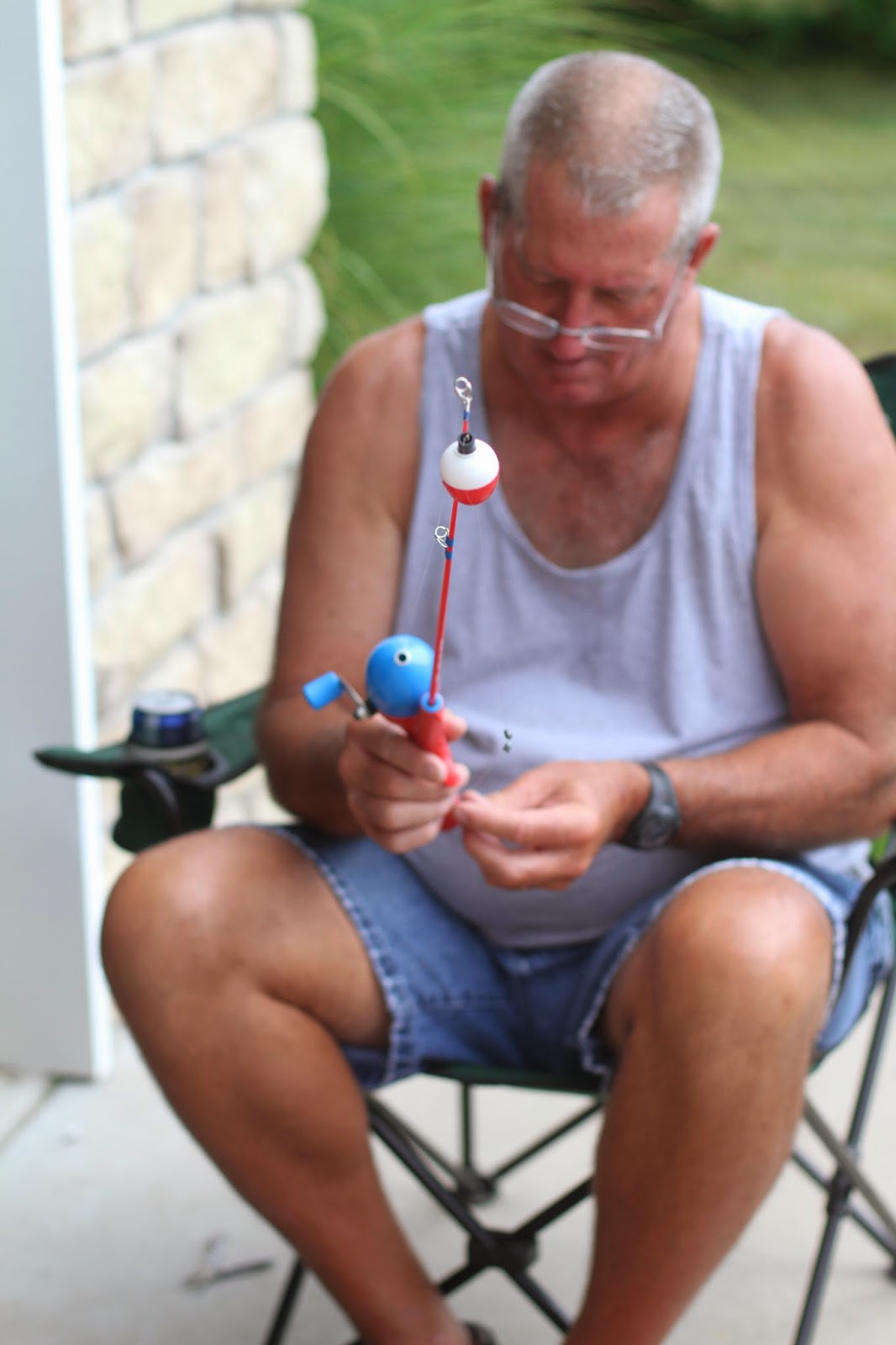 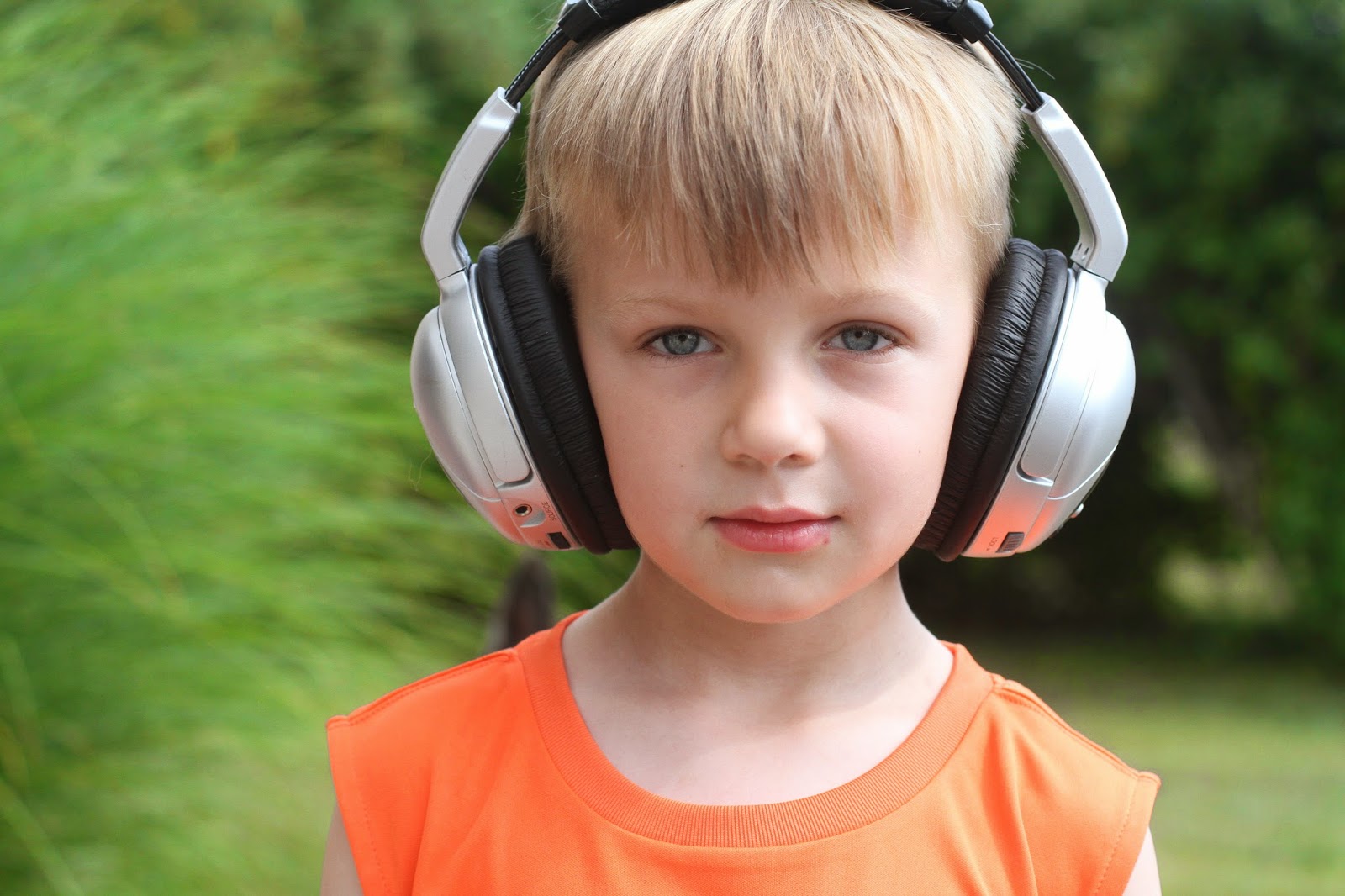 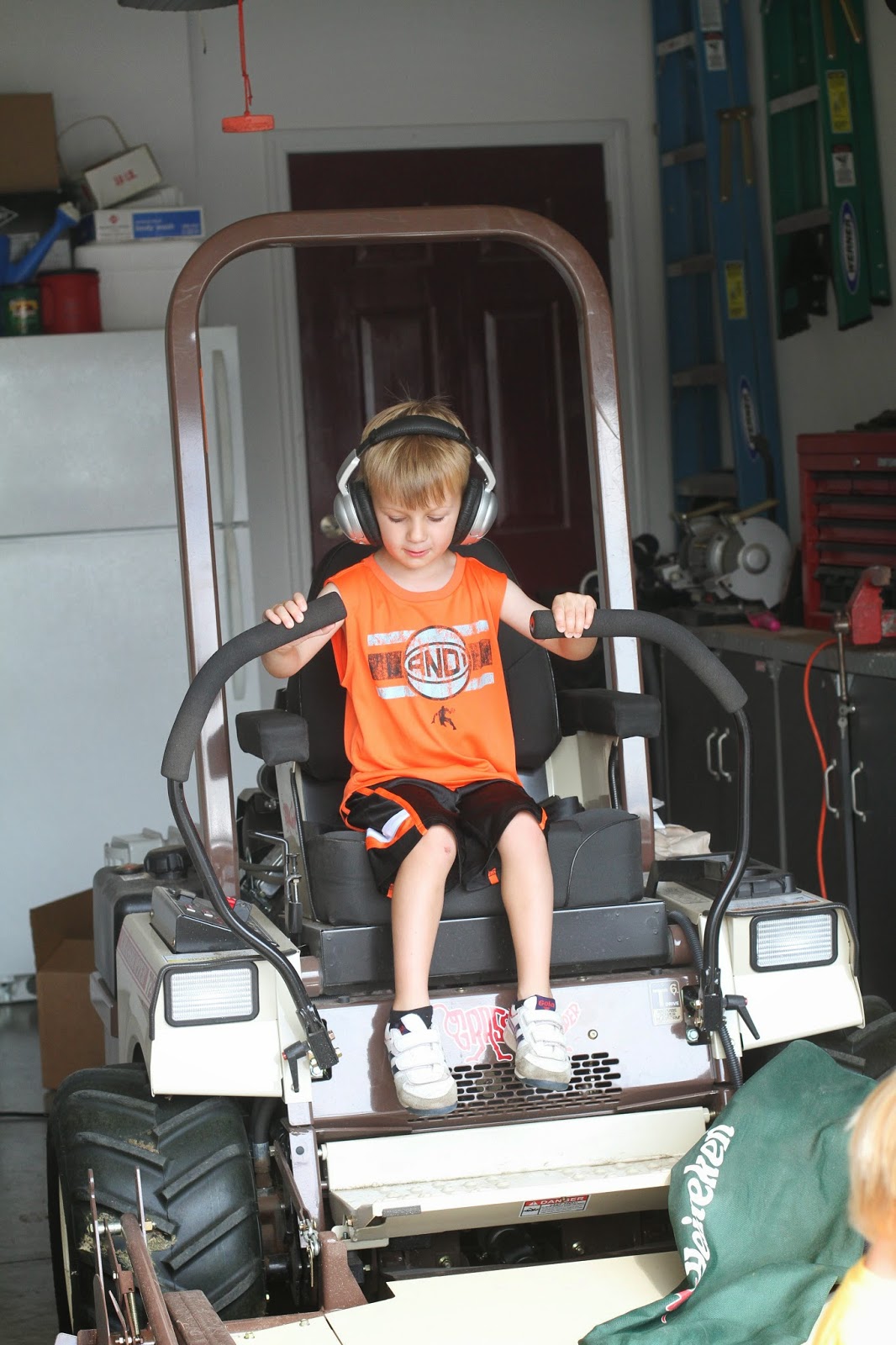 Finally it was time to head over to the pond. We packed the truck up with chairs, blankets, a cooler and "don't forget my pole Mom!"

Before the first cast we told the boys that we had to be quiet so that we wouldn't scare the fish. They were on board.

We threw the first cast and within seconds Logan had a bite & Grandma was able to set the hook, he worked and worked and finally he pulled in his first catch EVER. 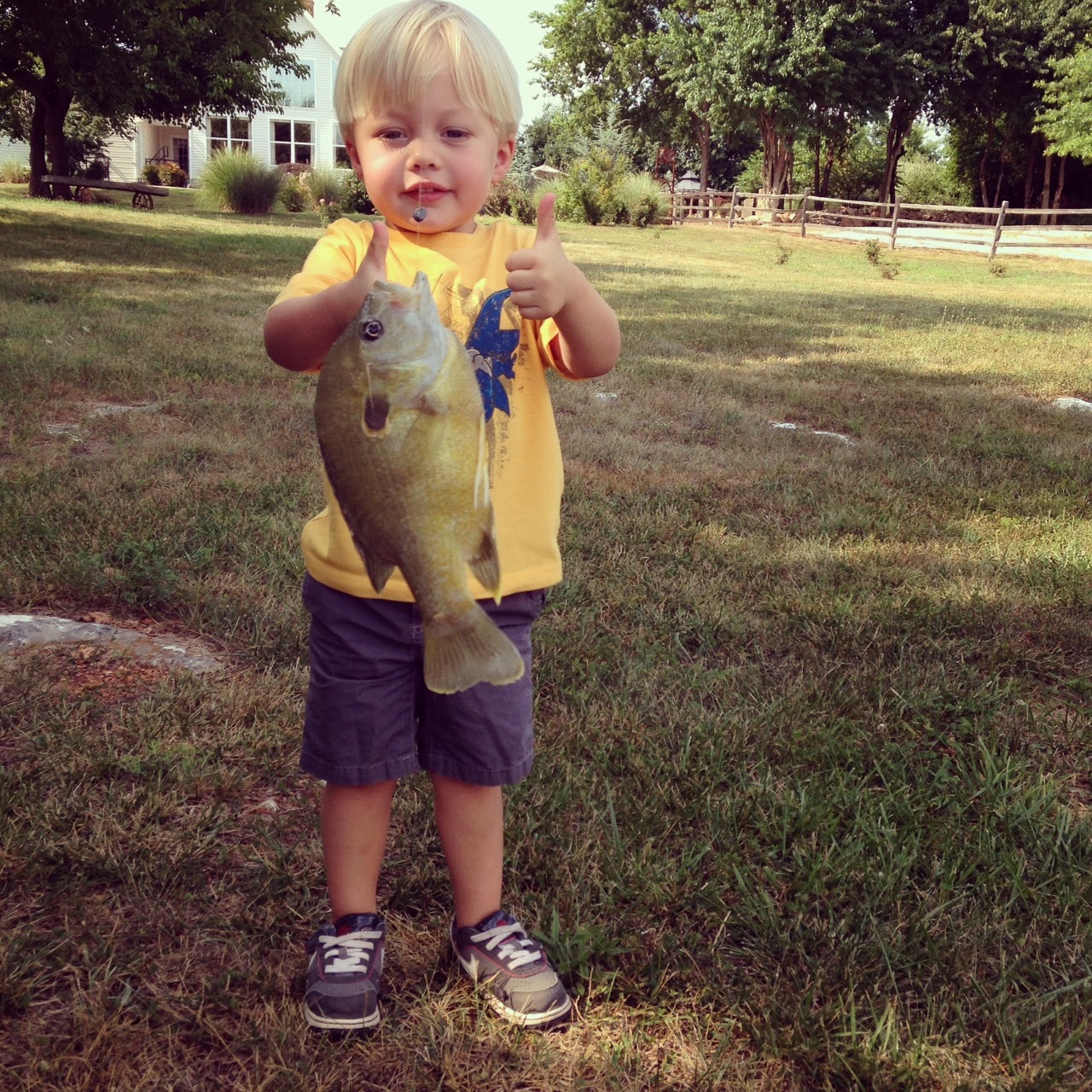 He was so excited and was fully prepared to hold the line himself but then Mr. Fish twitched. Not cool, Mr. Fish. Logan decided he was perfectly fine a safe distance away.

After we got both poles back in the water and the bobbers sat there for a few minutes Kaden smile went to a frown. "What is taking so long?" Patience is not one of his strong suits.

A few minutes later, he got his first bite and reeled it in all on his own but before he got it to the bank it jumped off but that didn't halt his excitement. We threw out another cast and just a few minutes later he had another one on the hook and this time I even caught it on video.


Does it really get any better than this? Talk about PURE JOY. These are the days that I wish I could just freeze in time, the days that wish our boys would stop growing up so quickly. Next month, this kiddo turns 5! FIVE. As in one WHOLE hand! But I don't really want to be thinking about that just yet…. 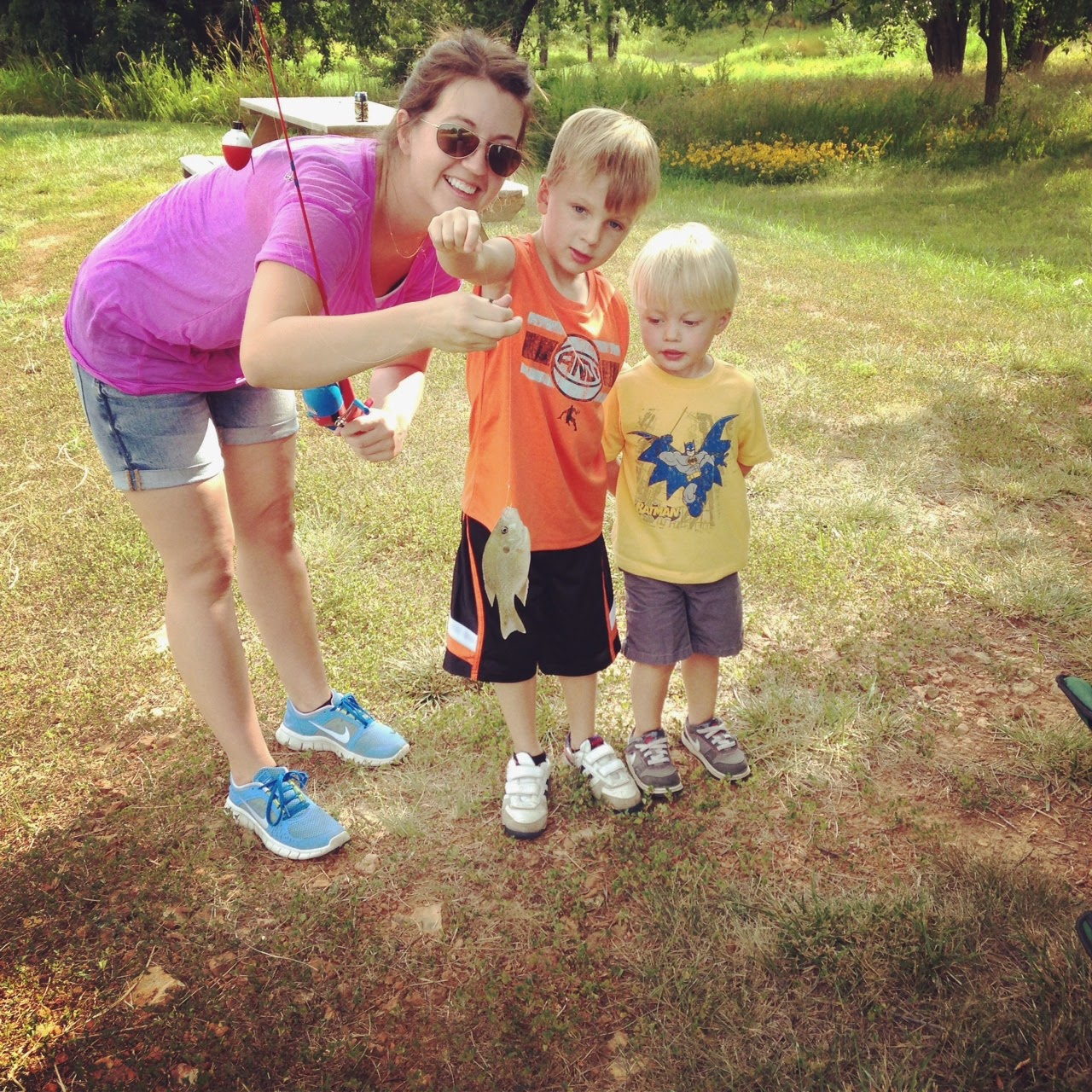 Mom, Dad and I had a wager on how long the boys would actually last and surprisingly they lasted almost two hours, well beyond any one of our guesses. And in that two hour time frame we caught about 10-12 fish while only getting tangled up about three times. 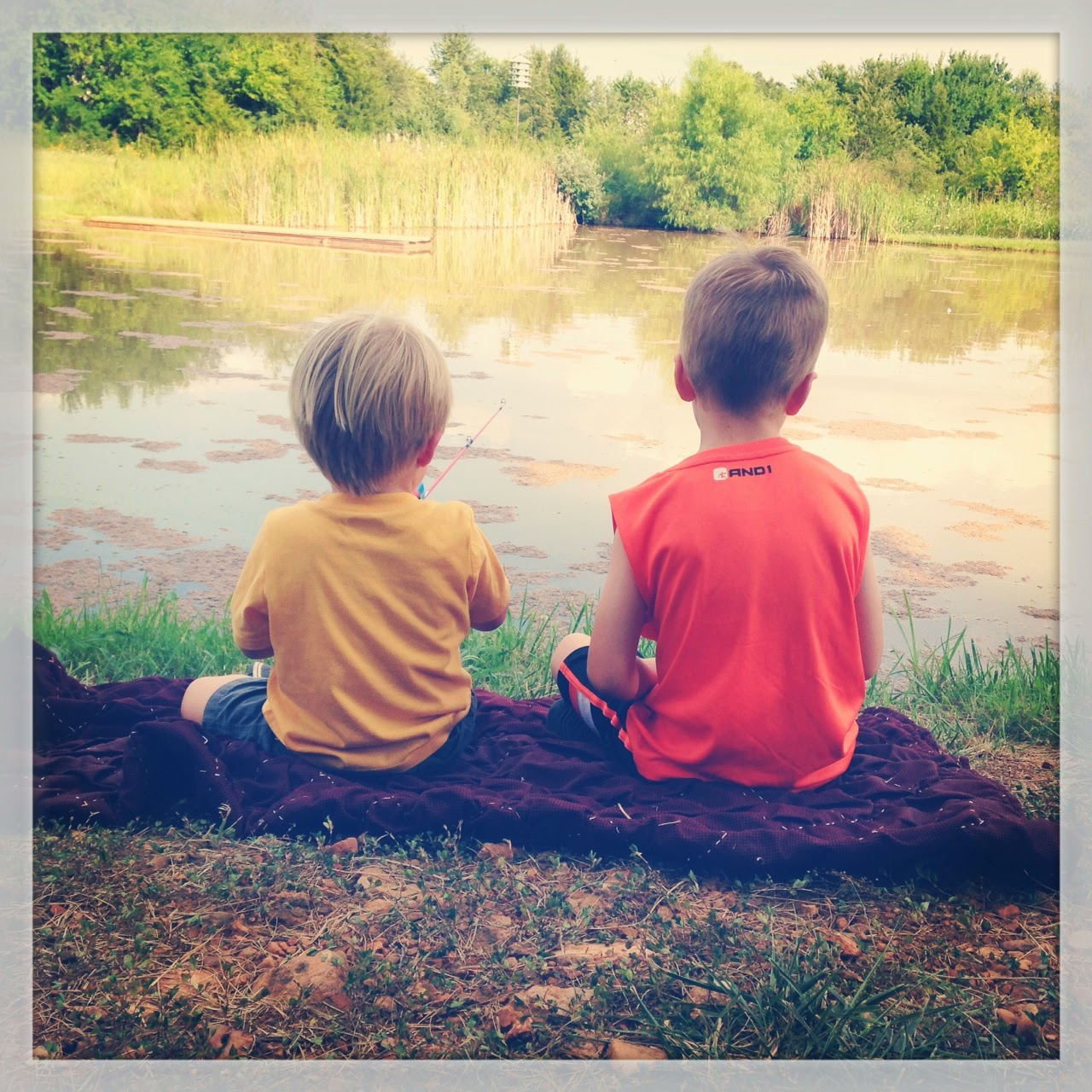 I'll admit, I was hoping that it wasn't going to warm up as quick as it did on Sunday and that we could have jumped back over to the pond for a few more casts. & I guess the boys did too because on the way home from church they were asking to go fishing again. Papa's response. "Fish don't bite on Sundays." & of course the boys just shook their shoulders with an "oh. okay. next time we come down then." 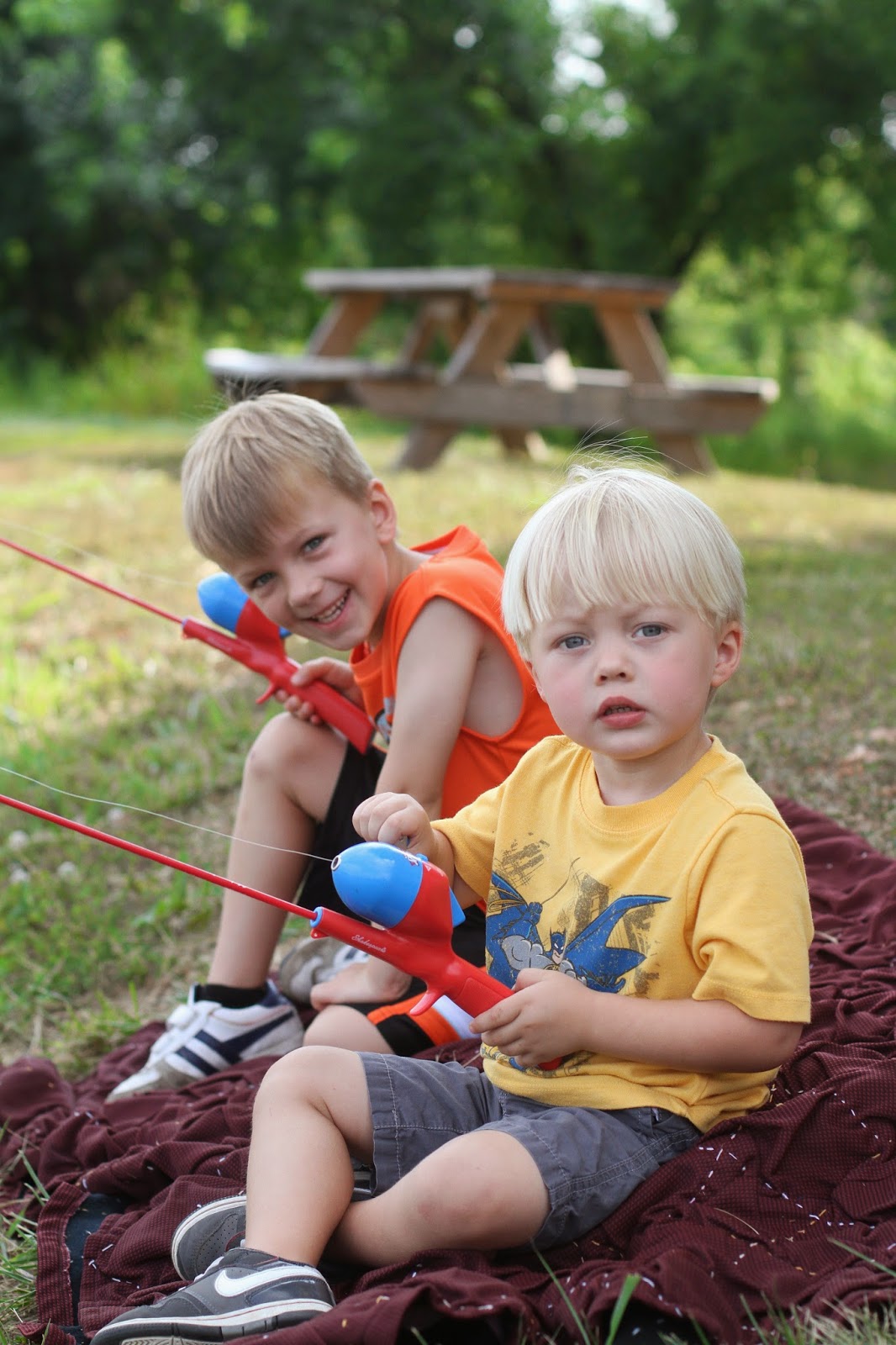 & that is exactly what we will be doing the next time we visit. I would have loved Justin to have been there because that was the only thing that kept this day as ranking as one of the BEST. DAYS. EVER. I loved being outside, in the country, watching our boys lean against Grandma Sara and Papa Tom as they waited patiently for the fish to bite. My heart is so full seeing the relationship between our boys and their grandparents & I pray that in they'll be making more of these same sort of memories next month. 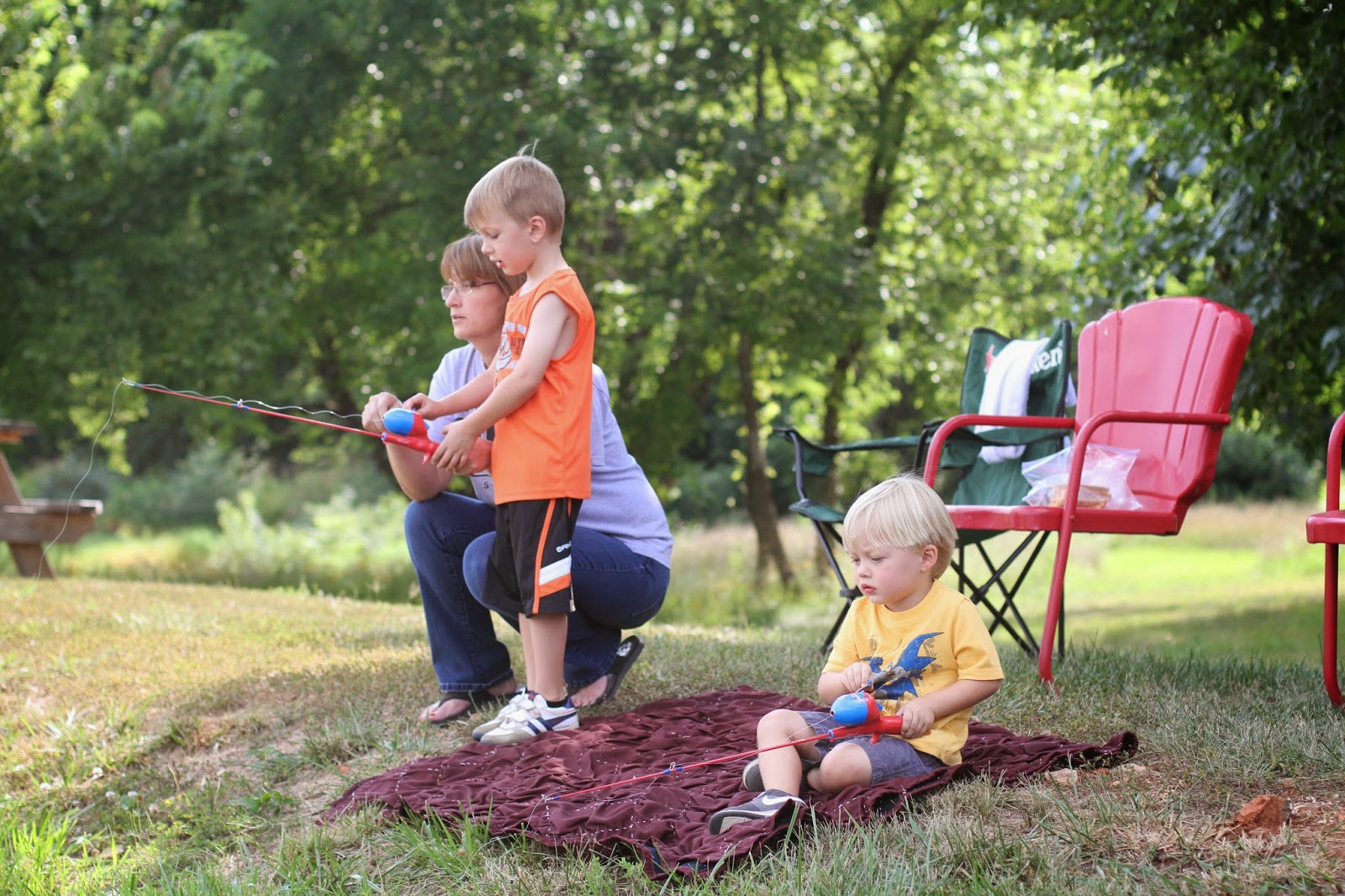 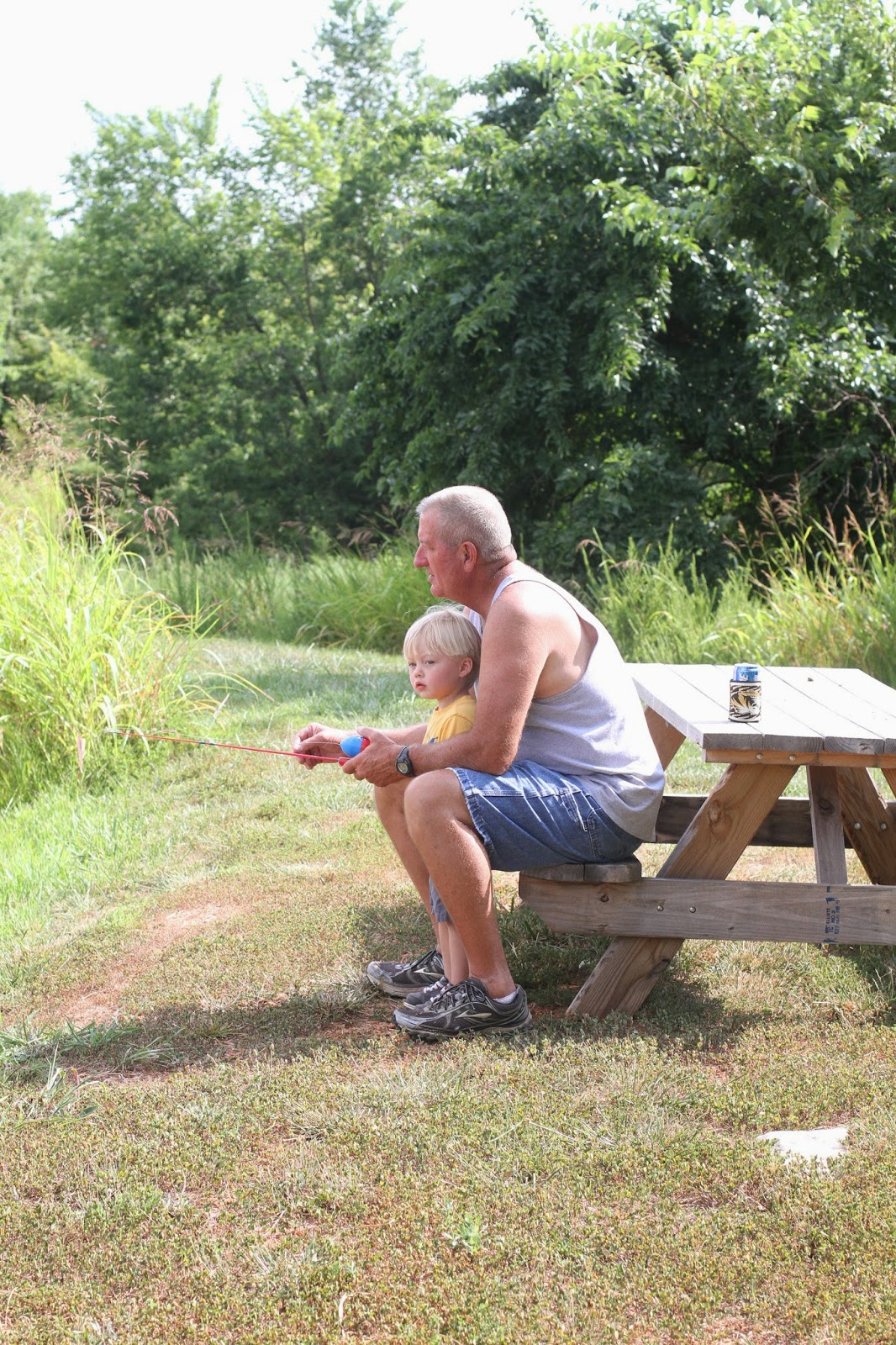