Although it doesn't seem as though my photography sessions have slowed down--due to the images I have been posting--they have. & I am close to working through almost all sessions that were on the books prior to making the big announcement, with the exception of a few Watch Me Grow sessions.

& even though I am still doing a few sessions here and there, the days and weekends where I haven't picked up my camera have been spent doing exactly what I wanted & NEEDED so badly. Its no secret that my husband was and still is my biggest supporter when it comes to my photography & it shouldn't come as a surprise that when I was away on a shoot, he was at home with the kids. Or took them grocery shopping. Or over to his mom's. He let me dive head first into my passion and I am sure he got annoyed that his weekend plans or evening plans were dictated by photo sessions but he didn't complain once. He would look at me and say, "Go, I got this. It's only a couple hours. We will see you when you get home." & I would go.

But then there came a time where I was "going" way too much & frankly, I didn't want to go anymore. I realized by not saying "No" to clients and trying to make everyone happy that I was saying "No" to the most important people in my life & I was done. & as I sat there thinking about the announcement that I made, I started realizing that I was being pretty selfish & yes, that's hard to admit but its the truth. Justin wasn't really getting "his" time. He was getting to follow his passion and that needed to change. & it did.

He and some buddies had been toying with the idea of getting into some BBQ competitions so over the next couple of months the Pitt Smokers (they all graduated from Pittsburg State University) got together a few times and did a couple trial runs. Justin was in charge of brisket, Jake had pork, CG had ribs and Scott had chicken. Most of the time the trail runs occurred at our house & I happily accepted the job of being the "judge". Now I will admit, outside of what Justin has fixed in the past & Oklahoma Joe's I don't eat a lot of BBQ but these Pitt Smokers' were on to something. They knew what they were doing.

BBQ competitions are normally two day, all day events. You begin on Fridays at 3 & they come to a close on Saturday afternoon, if you're lucky.

One afternoon I got an email that they had signed up for their first competition in Overland Park, the only bad thing, I was out of town on work. Thankfully I have an amazing mom & MIL and they split time with the boys so that Justin could be at the competition.

They put a lot of pressure on themselves to do a great job & I am sure it was nerve-wracking. I mean, you aren't just cooking in your own home for your own family and friends. No this, was being judged--on the color, the intensity of smoke ring, the taste, the use of sauce, tenderness, and so forth and so on. I was nervous for them because I remember what it was like to have those first few photo sessions and having to press send on the album, hoping that the clients liked what they saw because I had put so much work and love into them that if they didn't, it would have broken my heart. Being told you are aren't as good as what you thought you were isn't what anyone wants to hear but the reality is, it happens.

After the first competition the boys were ready to sign up for the next. They weren't discouraged & they weren't super stoked. They finished in about the top 25% or 50% in each category but more importantly, they learned a few things.

This past weekend they entered their second competition & were down a man. This competition was in Lousiburg & was the first annual competition & all proceeds were going to charity. They kicked off the evening around 4 pm & the boys and I, along with my mom and dad, arrived around 5:30 to say hello and enjoy a hotdog. They looked legit. They had a nice tent, tables to prep the meat on, electricity, lounge chairs & hammocks, two smokers & one temperature regulator (Justin's father's day gift for his giant smoker). They were ready to take on the night. 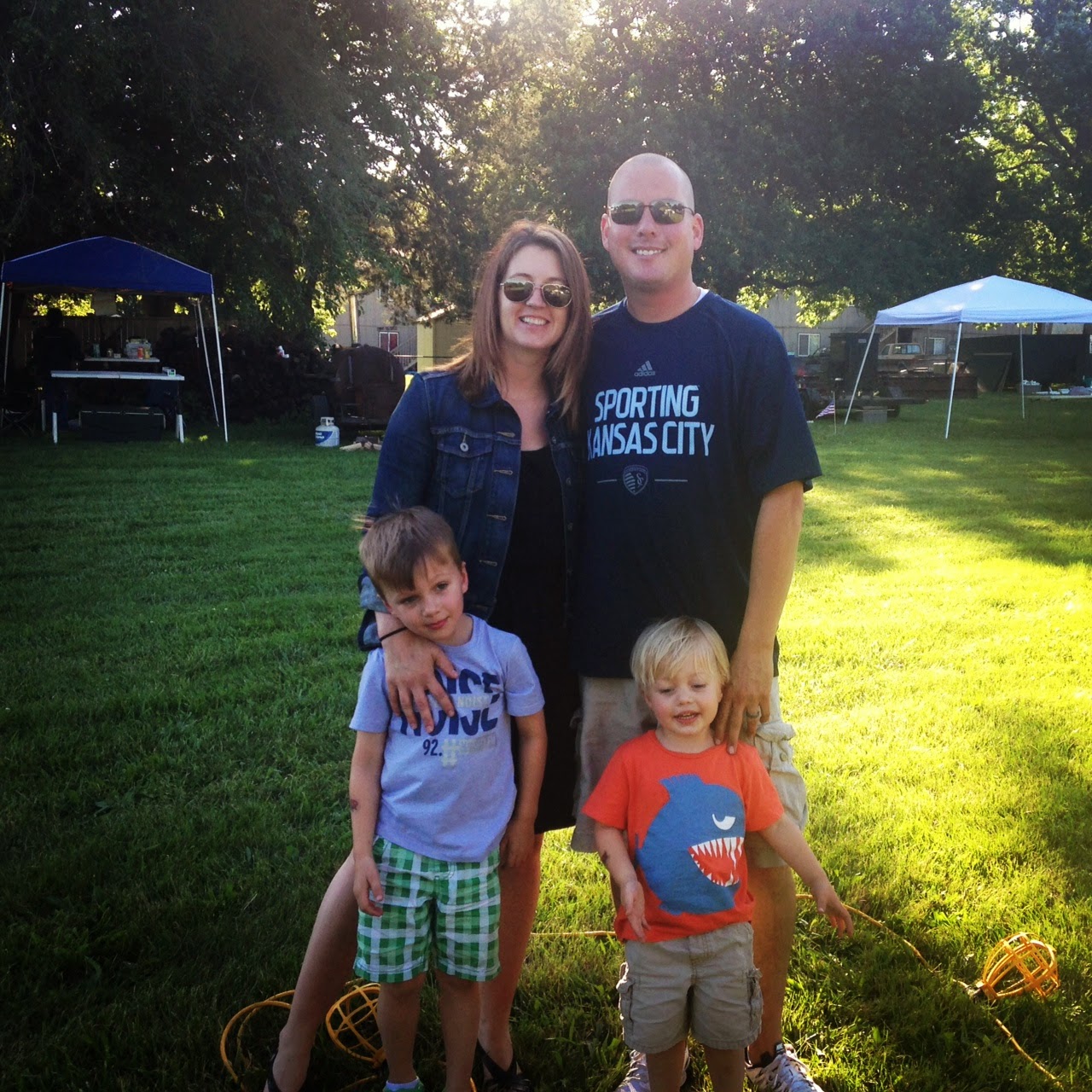 The boys, our boys, wanted to run. 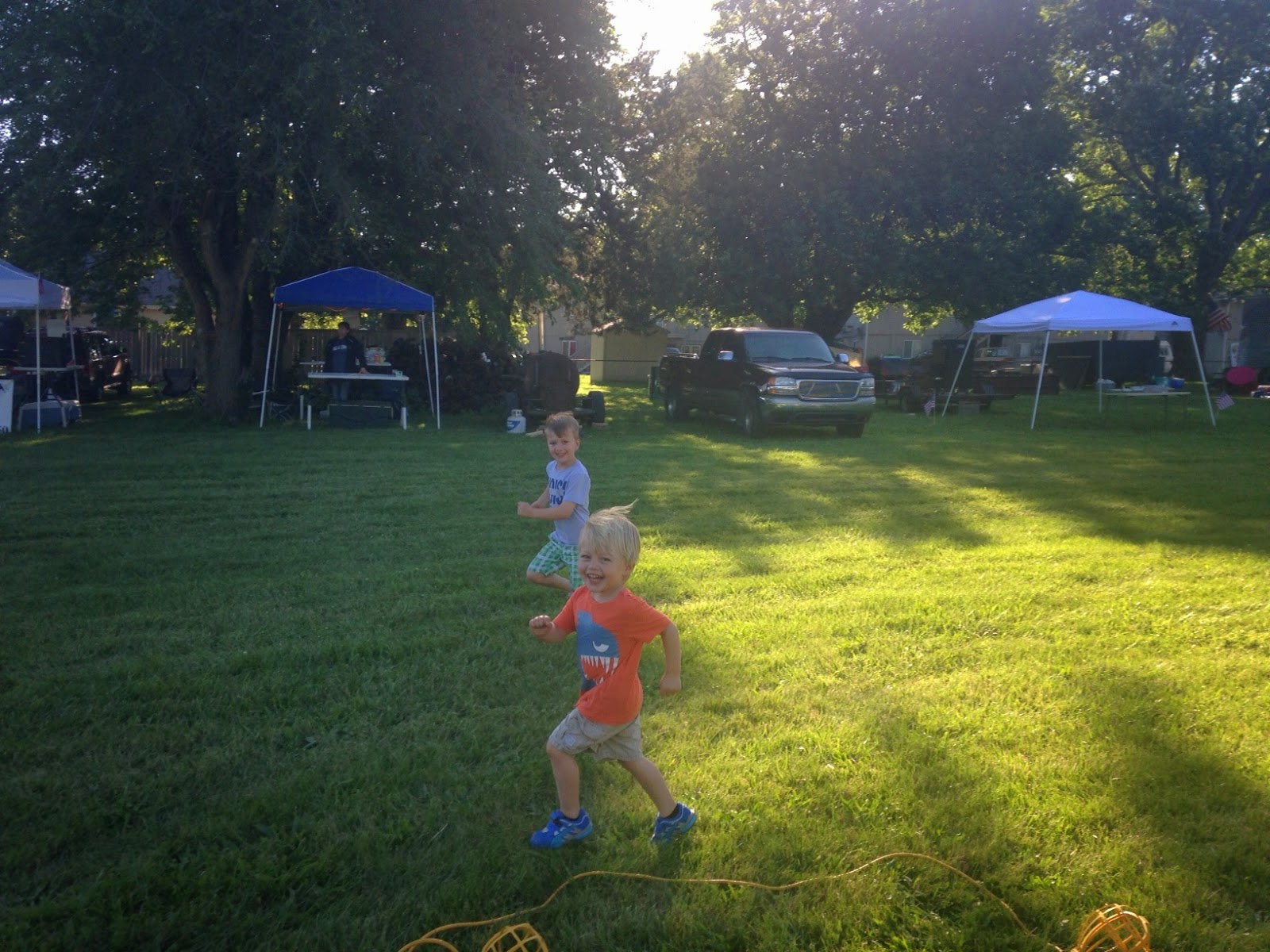 And wrestle. But what's new. 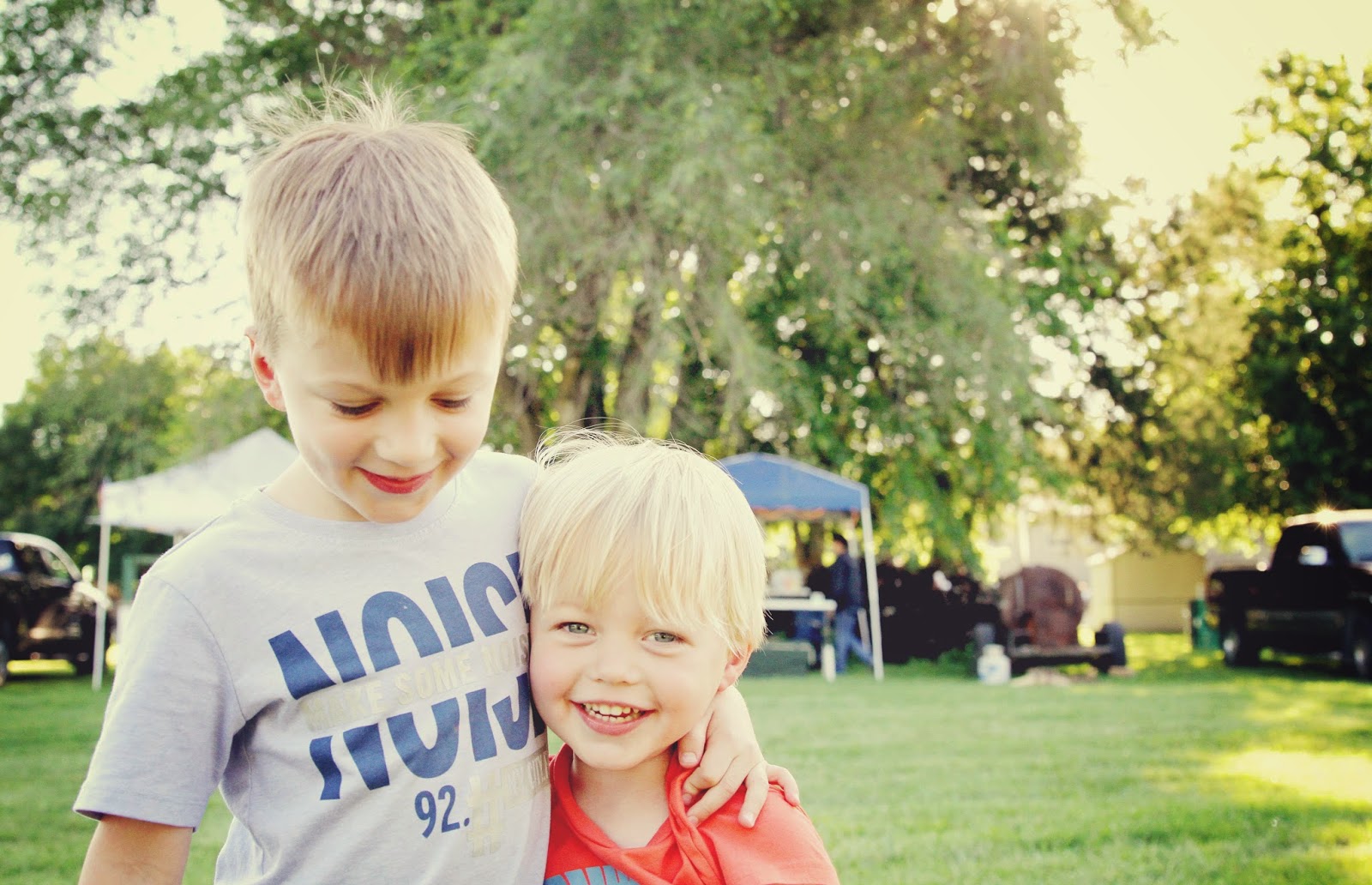 The next morning I received the following pictures of two turn in boxes, the ribs & the brisket. Now they just had to wait & wait a LONG time. Turn in was from 11:30 to 1:00 and awards weren't happening till 7… 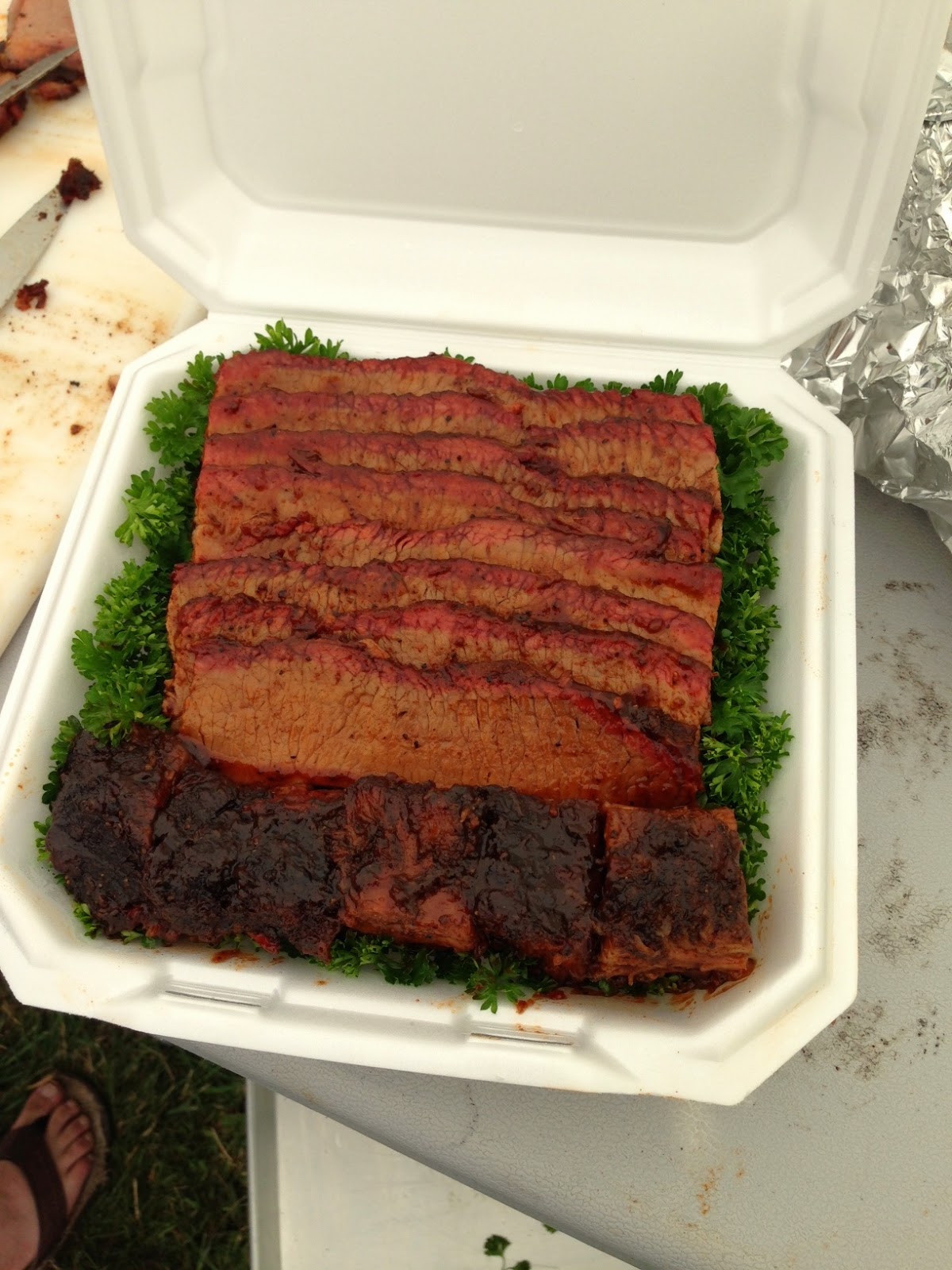 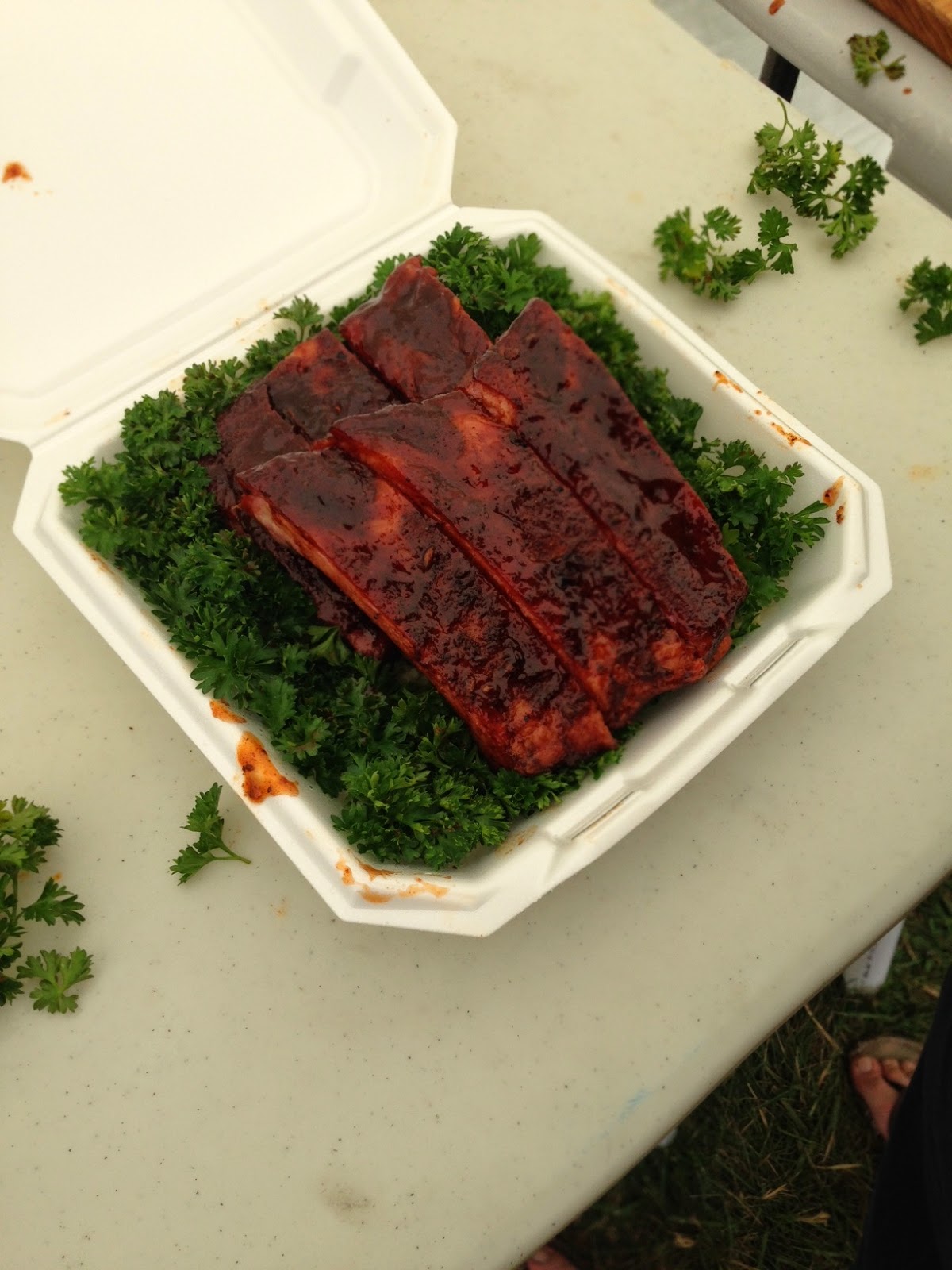 About 7:35 I got a call. A call from a very giddy Justin. It went a little something like this:

Justin: What are you doing?

Me: Just got home from the movies, I stopped and got us all dinner.

Justin: No, seriously, we did. & the funny thing, CG wasn't there to accept the awards, he already left. He is going to be so pissed. I'll be home shortly.

Now, I won't lie, I didn't really believe him. To take first in three of the four categories and then grand champion on their second EVER competition--that's unheard of. & then I got the following picture. 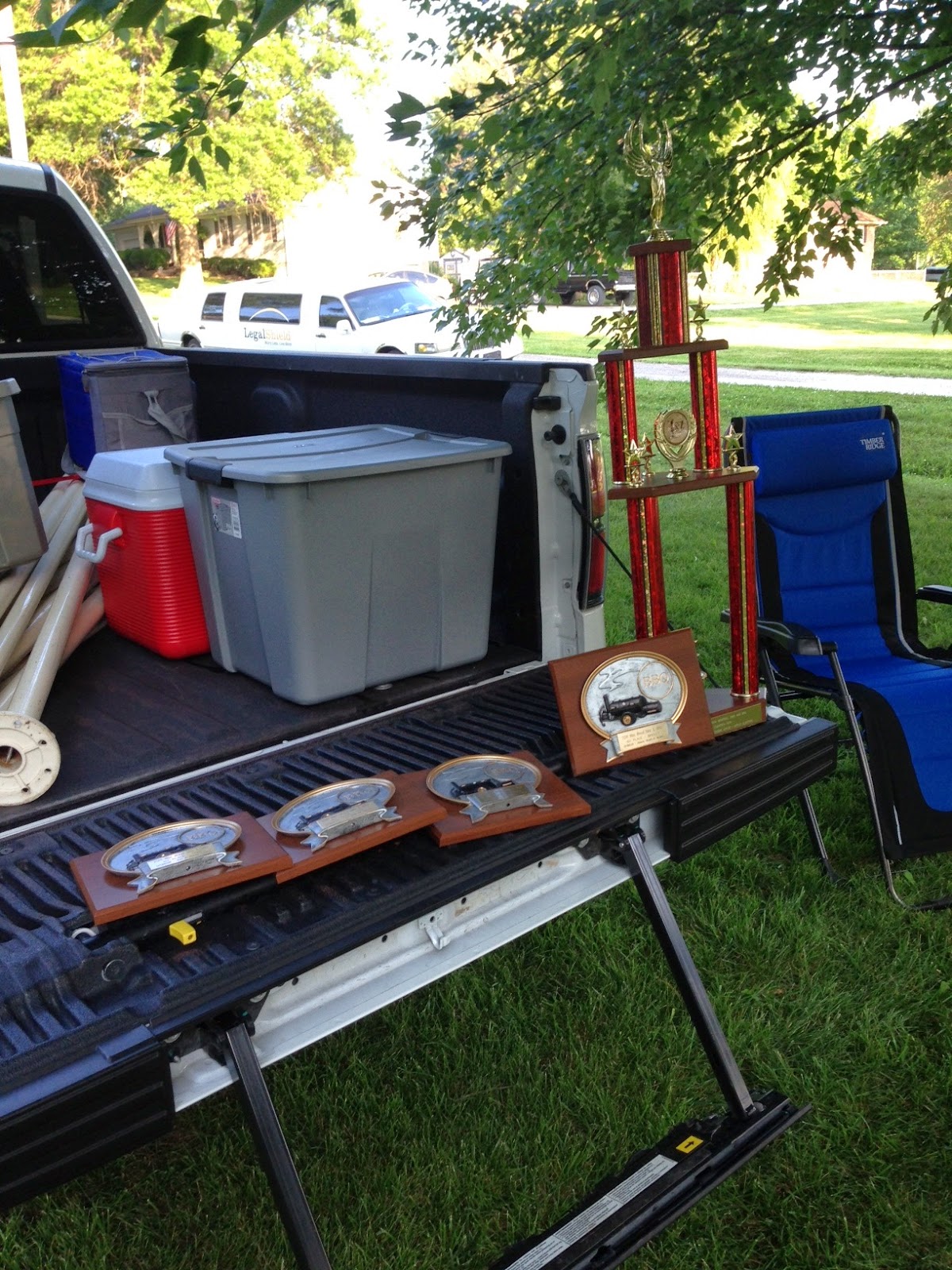 & even after seeing that, I kind of thought, they could have taken that picture while talking to the winners. It wasn't like I didn't believe them, I just couldn't believe it! As great as their BBQ is, there is a lot of strategy that goes into these competitions & rookies don't often win, the cards just weren't in their favor.

& then this picture came through. 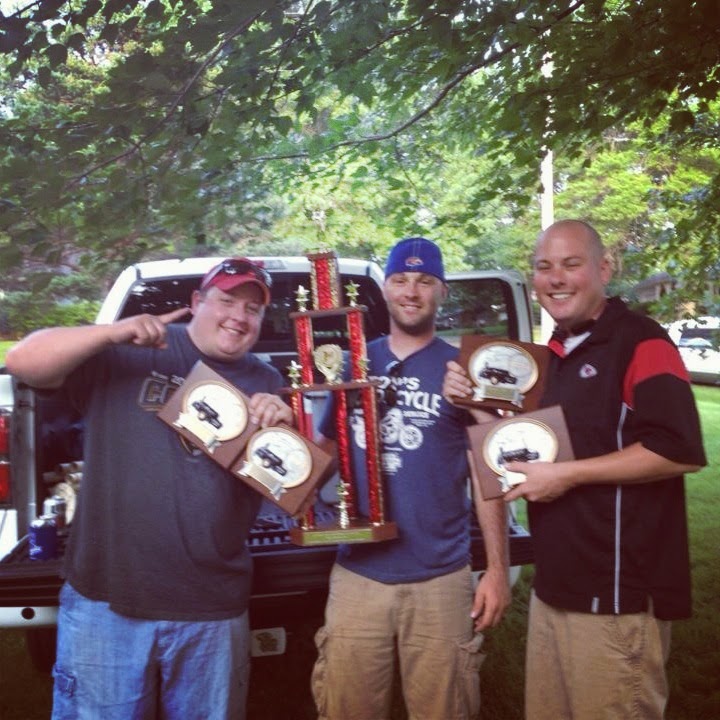 They really did it. I'm even smiling from ear to ear just thinking about it now. The hours and hours of watching Pit Masters, of reading anything and everything BBQ related, all the little gadgets, the new smoker & heat regulator, the trip after trip to the meat market---it all paid off. They were on cloud 9 & it was nice to see them so giddy about their achievement. They earned it.

& seeing my husband following his passion and loving every second of it, makes stepping back from photography all that much easier.

Oh & if anyone would like to get creative and design a shirt or logo for them, please let me know. We would love to get some t-shirts made up but we aren't very artsy!