This past weekend we loaded up the Yukon and headed to the lake for the first time this summer. We have spent A LOT of time at our pool but had yet to make it to the lake and it was time to check that off our Summer 2014 Bucket List. 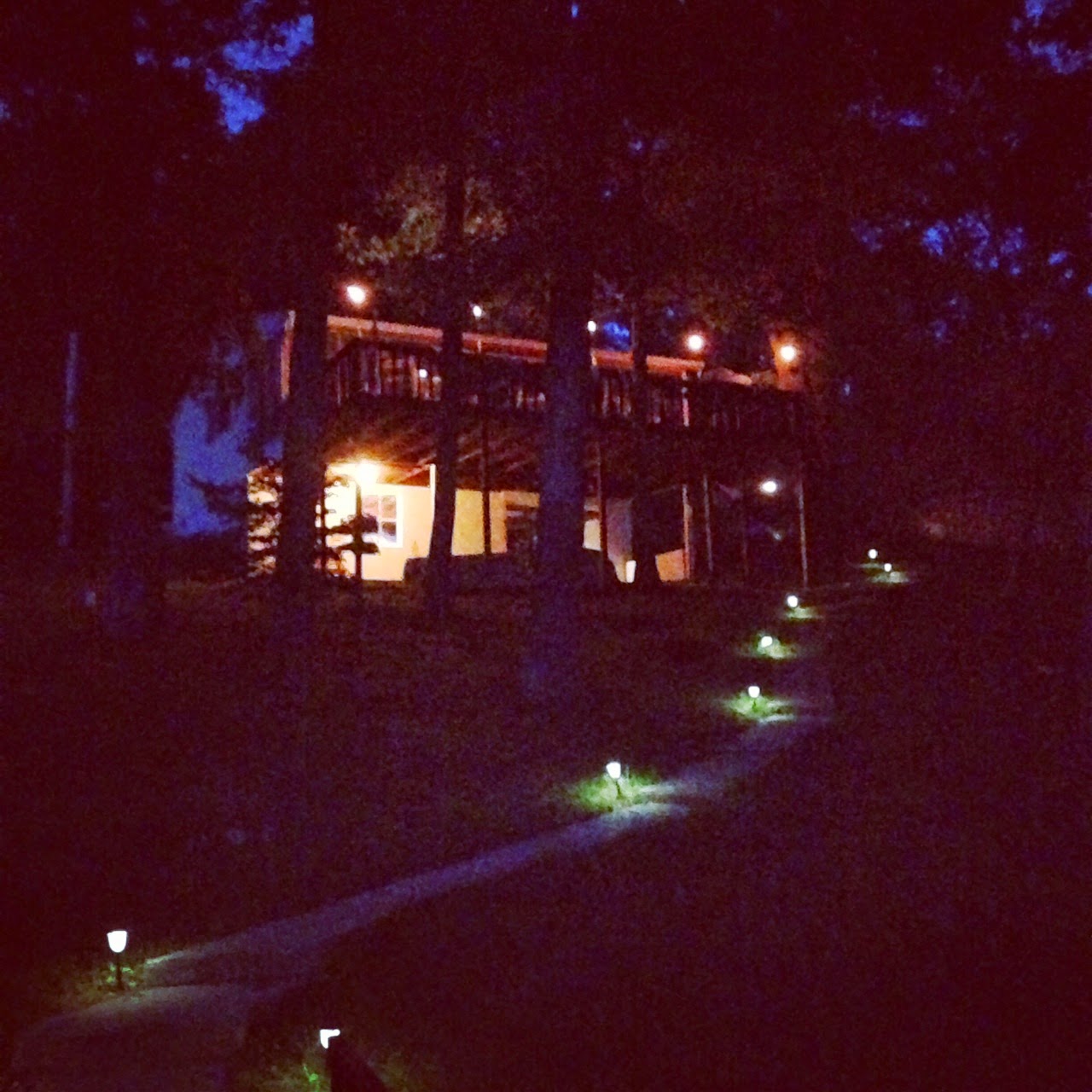 We decided to leave during nap time on Friday in hopes that the boys would fall asleep on the way but that didn't happen. And about every 15 miles we got the infamous, "Are we there yet?" or "Are we off the highway yet?". It got old, real quick.

Finally we pulled in the driveway just after three & the Walshes pulled in right behind us. The boys reluctantly allowed us to unpack the car and get settled in before putting on their suits but once they were on though, it was times for the RULES. We really only had two but they were important ones.

Rule #1: No stepping foot OFF the DECK without a LIFE JACKET. 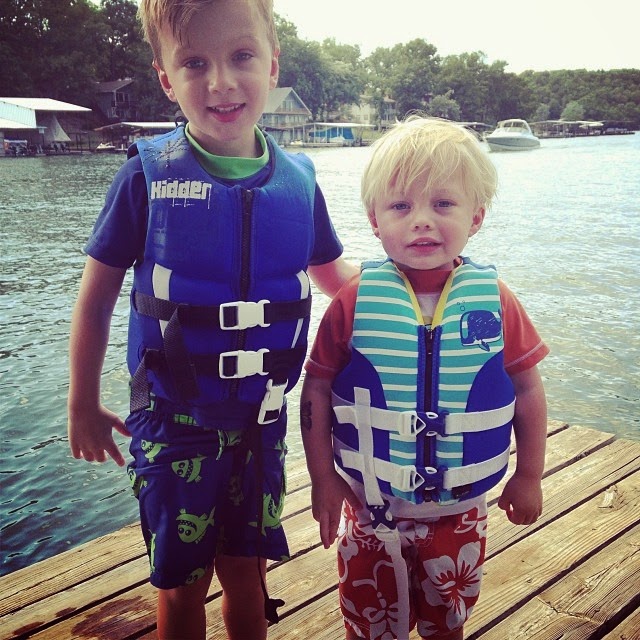 It didn't take long and Kaden was jumping in & this time was not worried about the darn dragonflies, thanks to Ms. Brenda. She had just finished teaching the boys about butterflies and told them that dragonflies were just as friendly as the butterfly & that is all it took.

Logan didn't want to jump in but he allowed me to lower him down into the water and off he went as well. Day one on the water was looking pretty good. 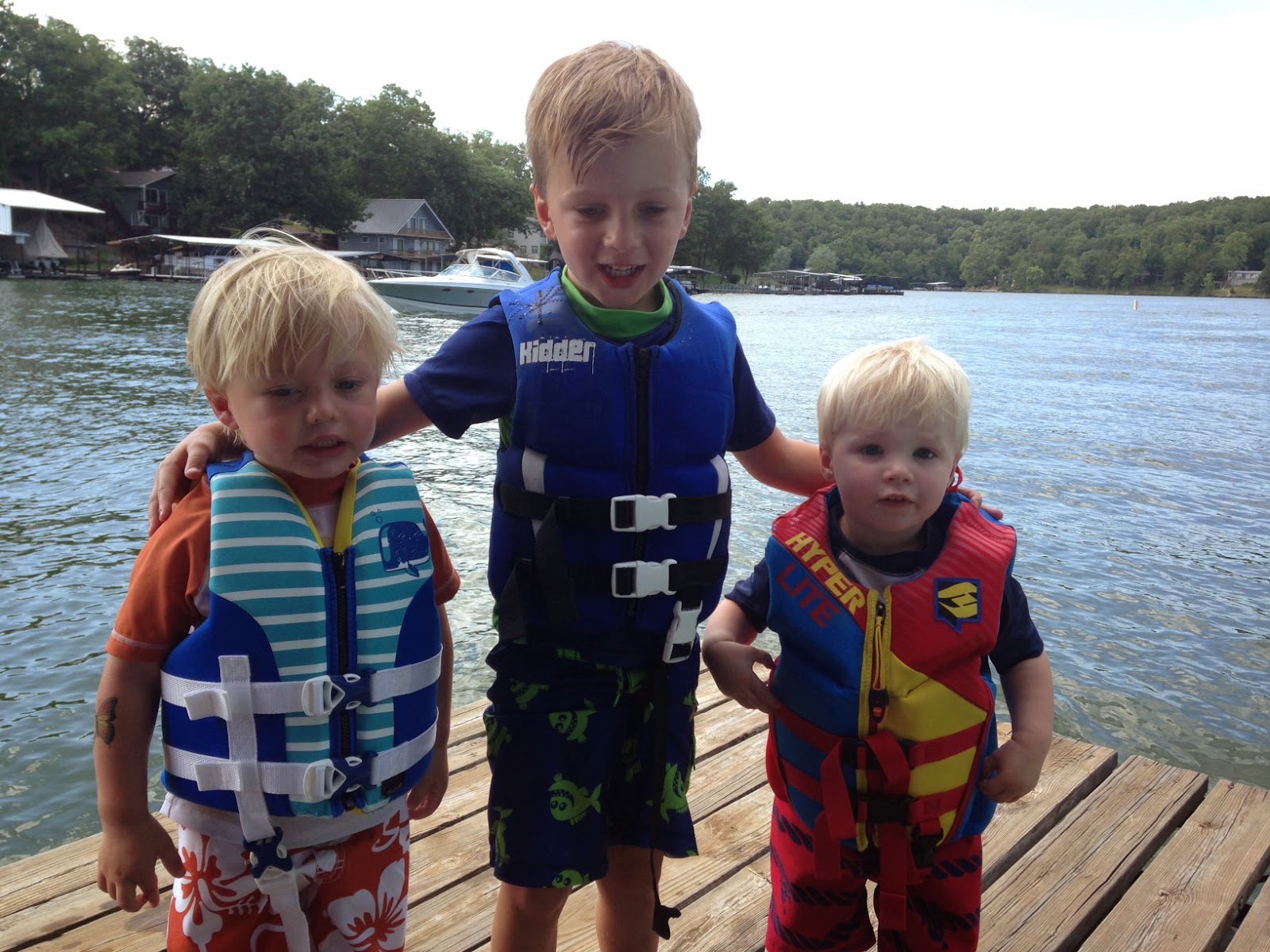 In fact you couple an afternoon of swimming with a three year old who didn't get a nap and you get this. 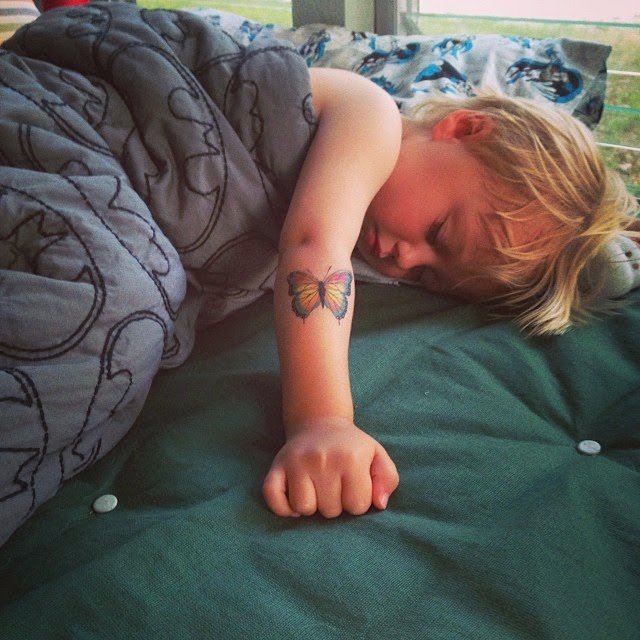 & not to be confused with an afternoon of swimming and a five year old who didn't get a nap. Kaden was giving us all a run for our money & it finally took turning on a movie for him to fall asleep. 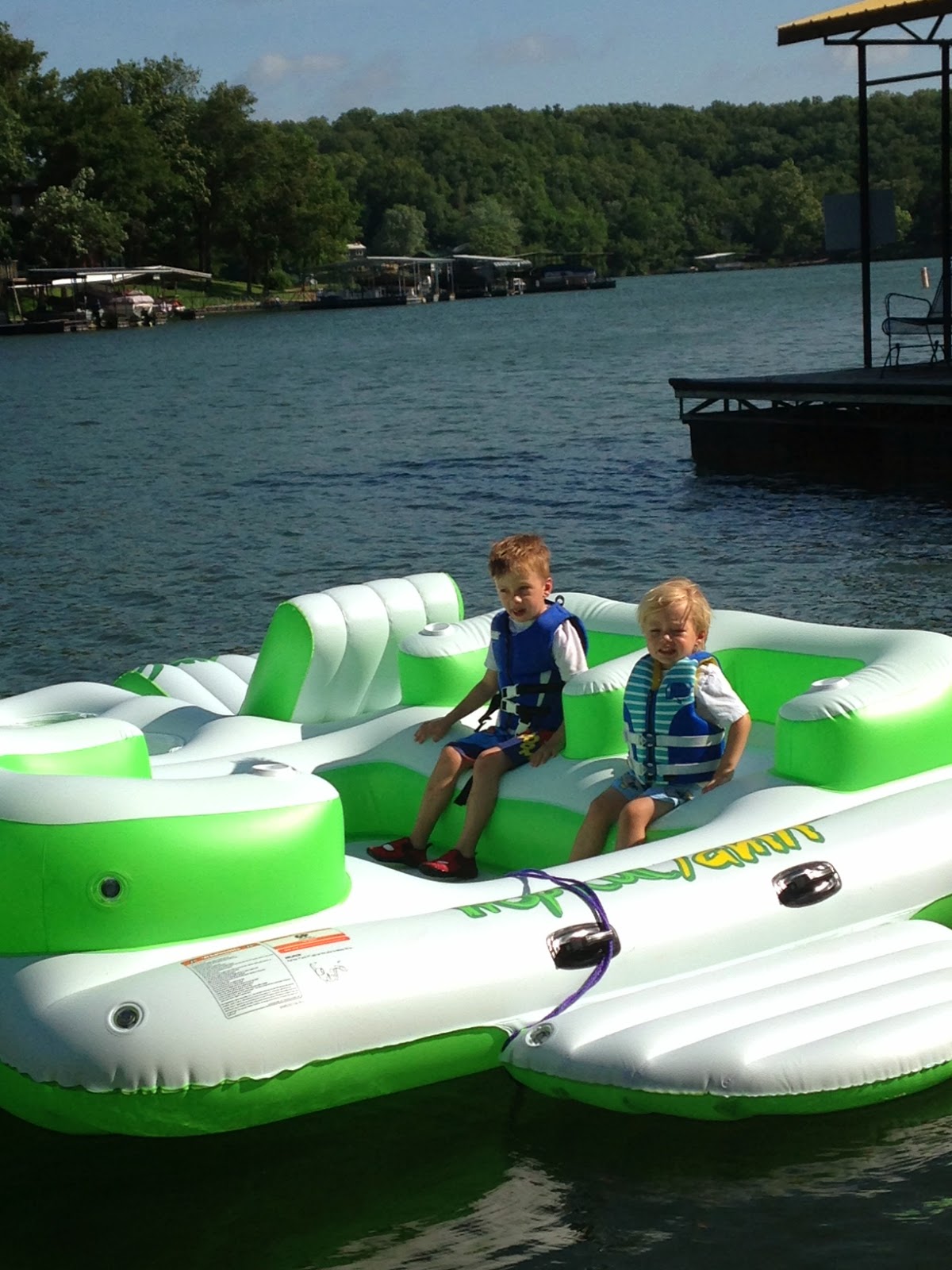 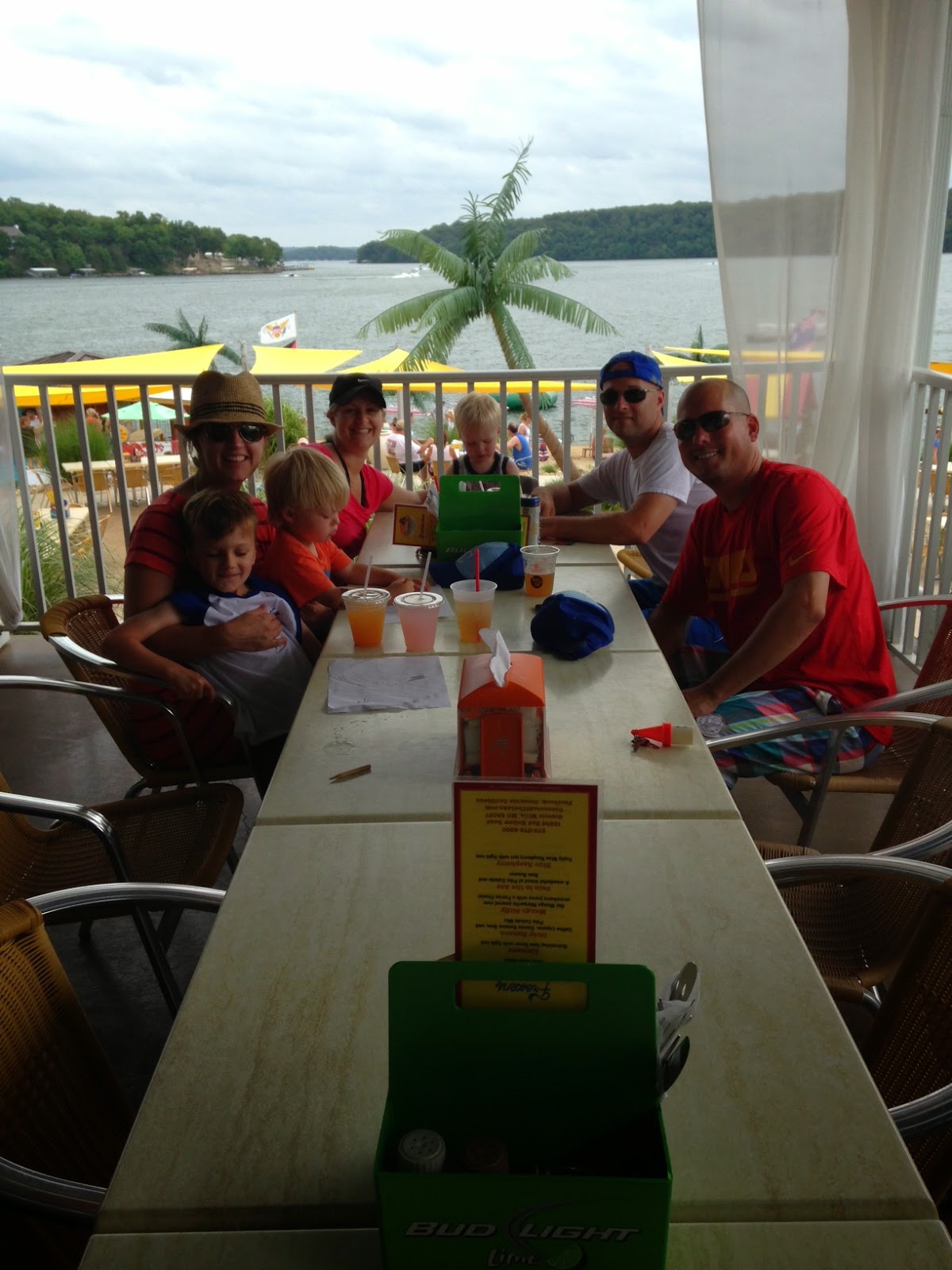 Saturday morning we had more time at the water followed by a short ride to Coconuts for lunch. Where not only did we run into Coach Pinkle, who shook Kaden's hand but the same three year old that passed out early from no nap the day before, decided to take his nap at lunch. & no, he didn't fall asleep in the life jacket, I actually put that back on him while not waking him up. 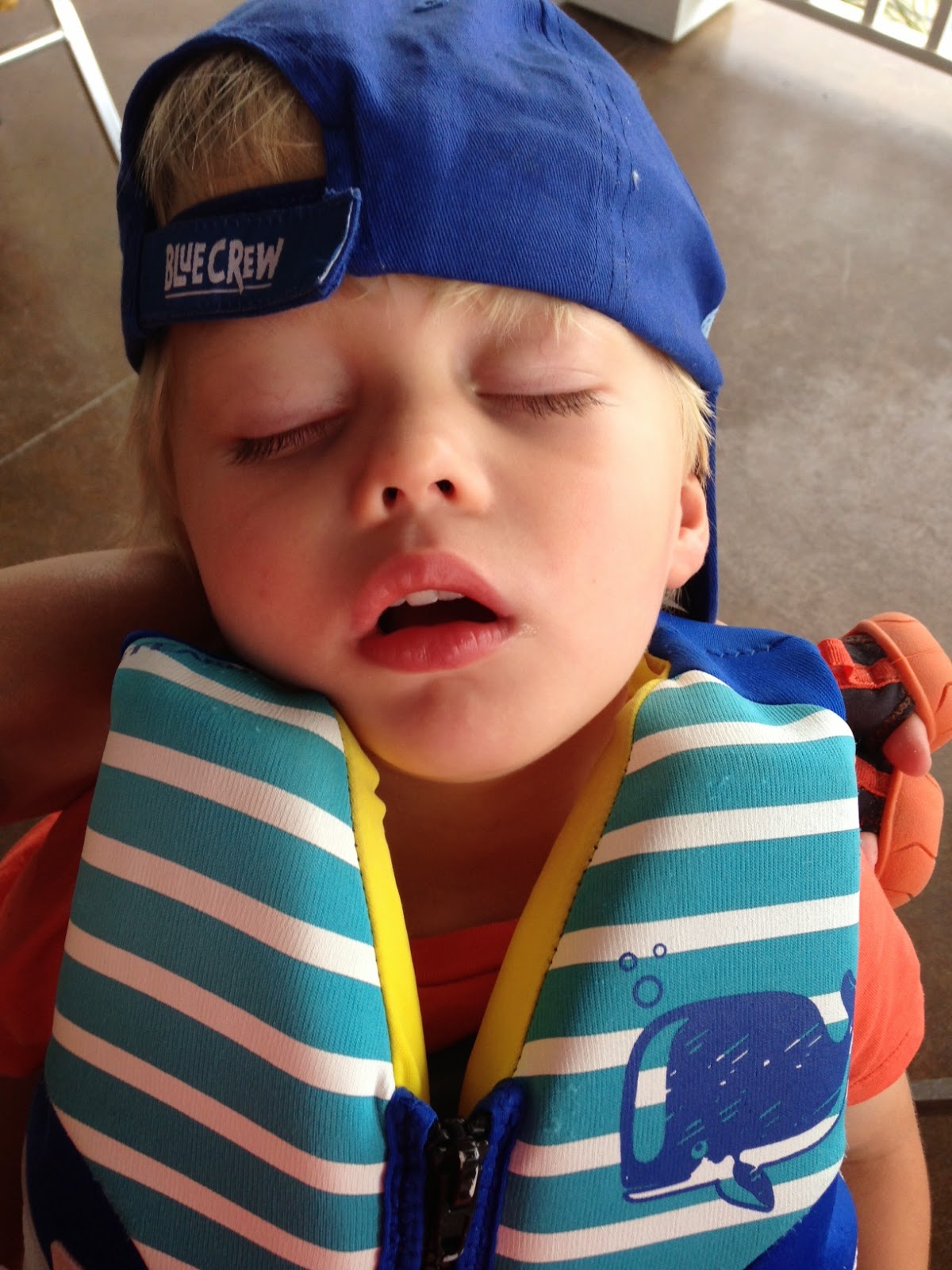 As we were making our way out of the restaurant Logan must have heard Kaden ask to stop and play for a few minutes because he was instantly sitting up in my arms and wanting down to join his brother and Nathan. 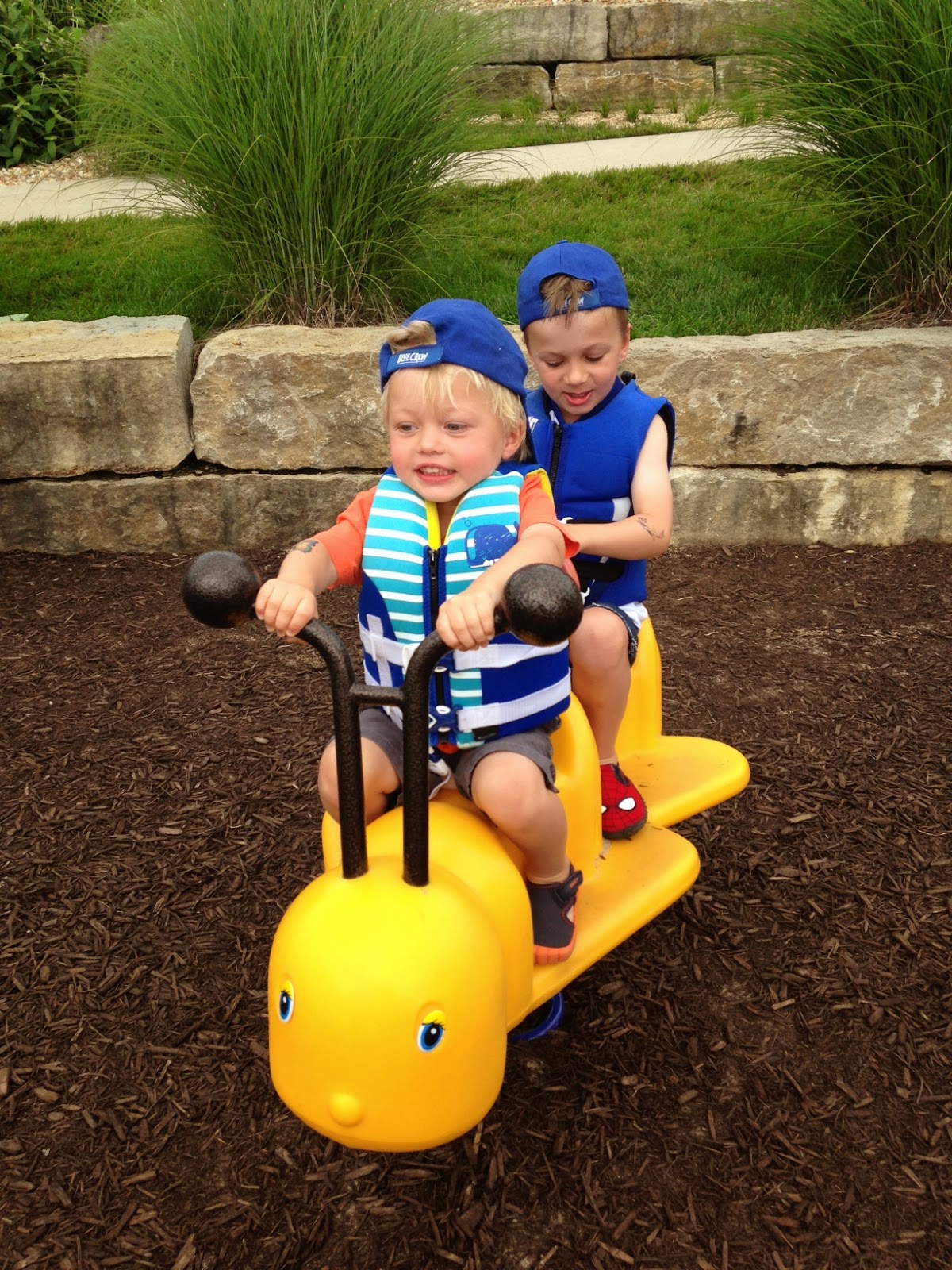 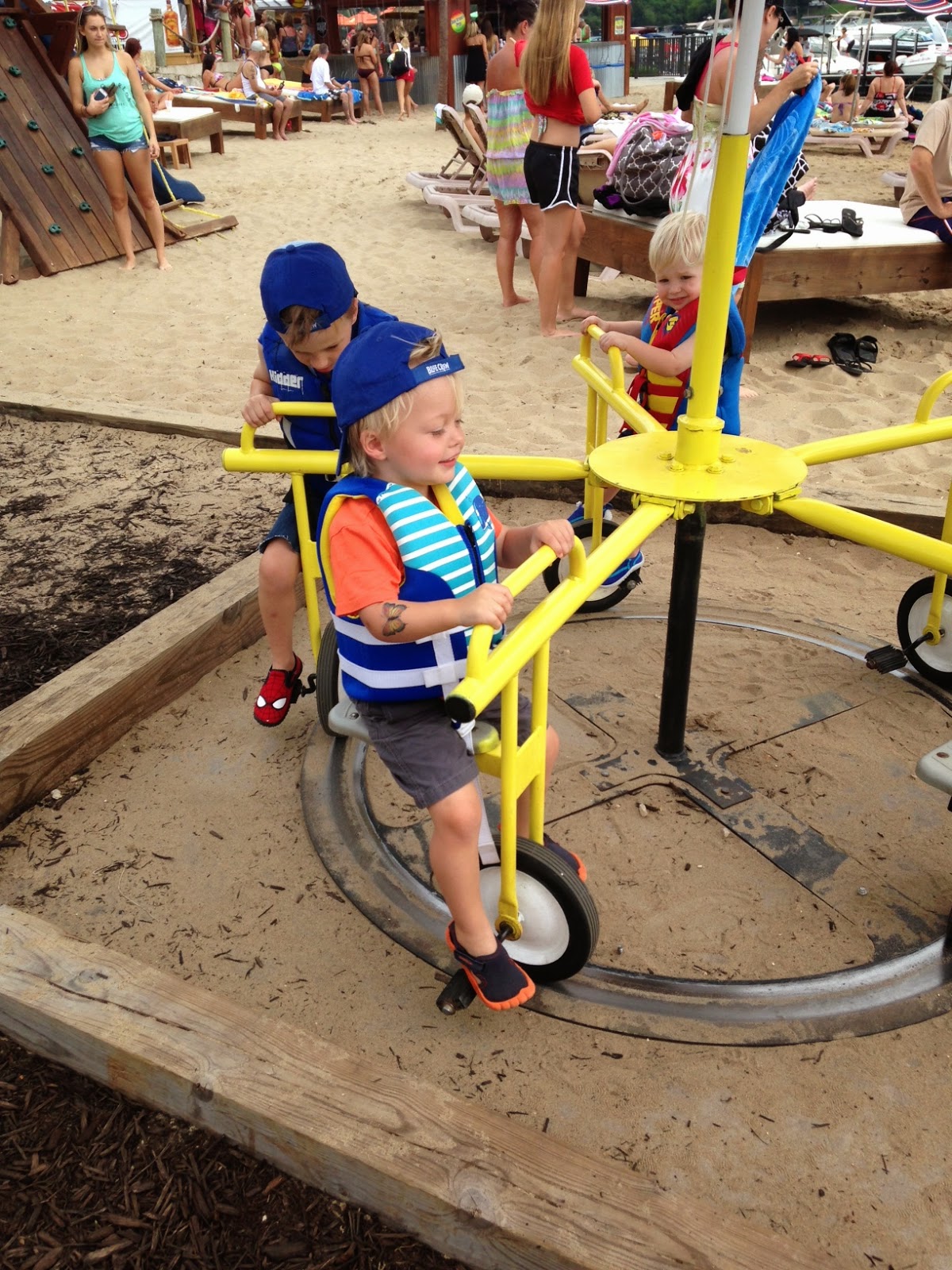 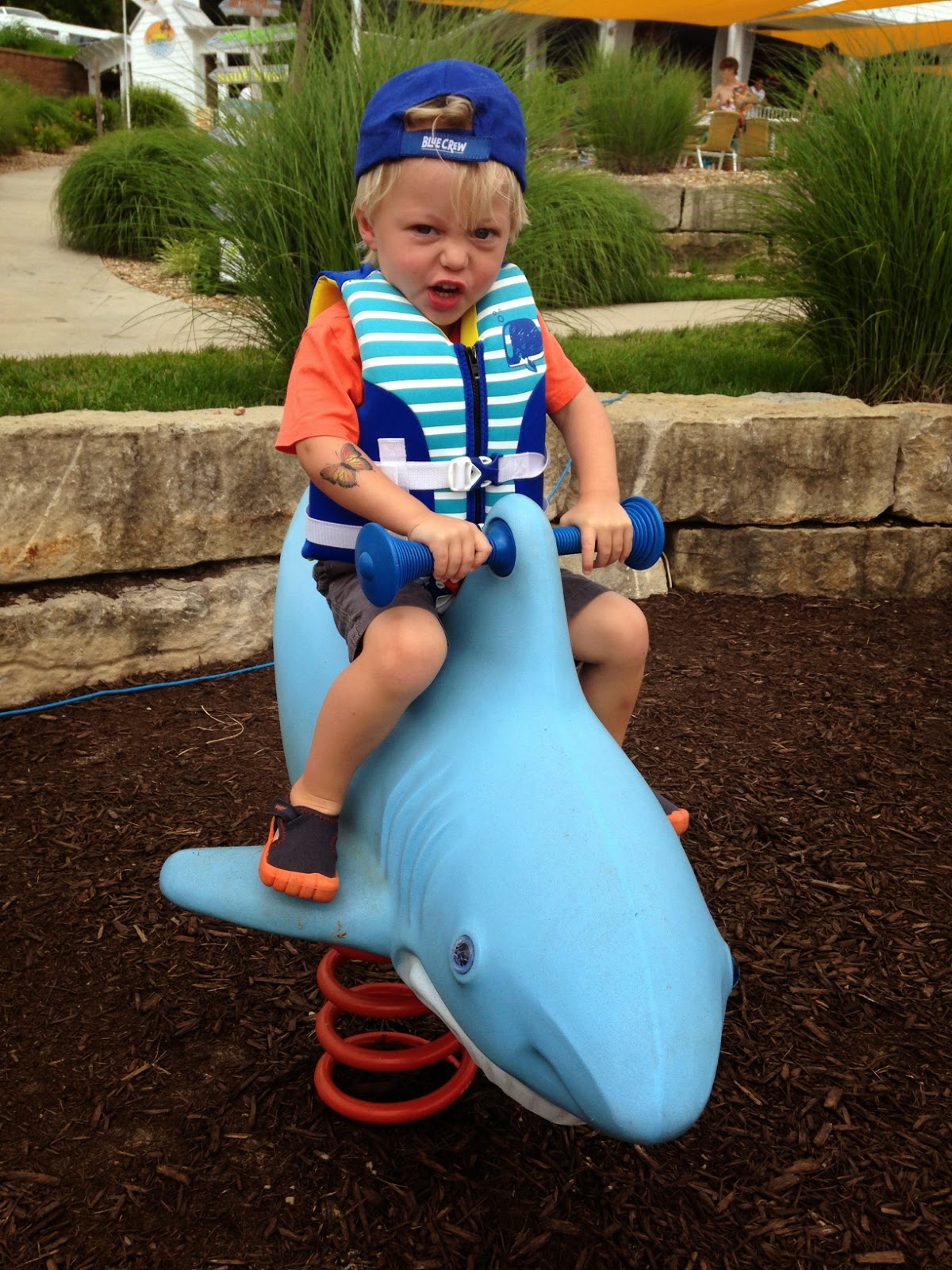 We didn't let them play for long because we could tell it was going to start raining soon and although our ride back to the house was rather short, we didn't want to get caught out in the rain. It may look as though the boys are absolutely terrified in this image but they weren't. Kaden, especially, loved everything about the boat this year, it took no time for him to get comfortable with it and was asking from the beginning when he would get his chance to drive. I got that warm and fuzzy feeling in my heart when I saw the boys climb up next to Justin and drive, as I am sure Janet did when Justin was young and climbed up on Dave's lap. 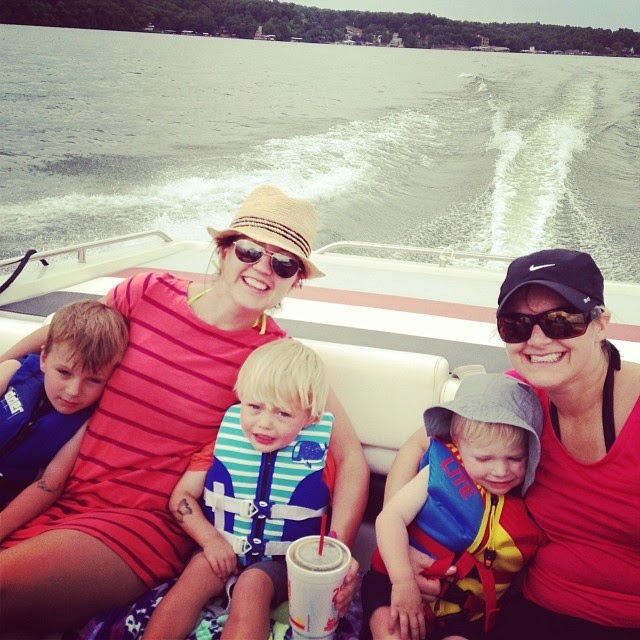 The rest of the afternoon was spent dodging rain. While it was sunny, we were at the water. While it rained, we were watching movies. And we weren't the only ones who got to enjoy the warm sunny weather, Stoli made the trip with us. She absolutely loves being down at the lake. She doesn't care a lick (pun intended) for the water, in fact you could tell just how annoyed she was in Justin forced her into the water but the girl LOVES her sunbathing time. She could & did sit out on the hot deck all day long. She somehow managed to take a little break and give me some kisses. 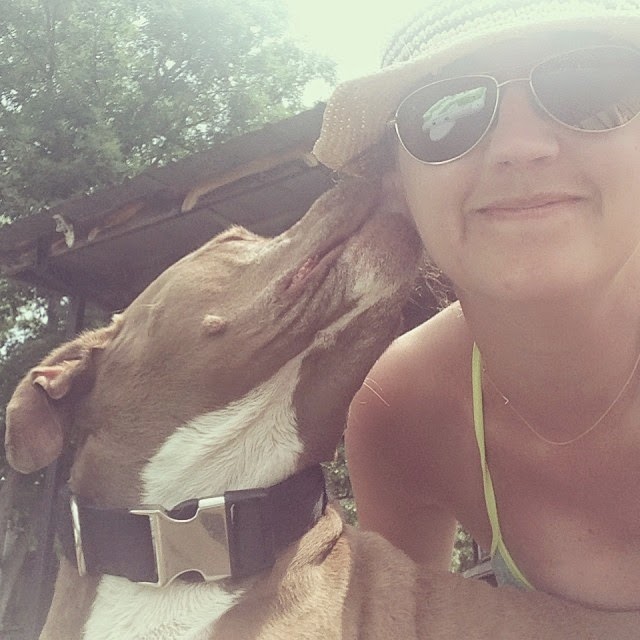 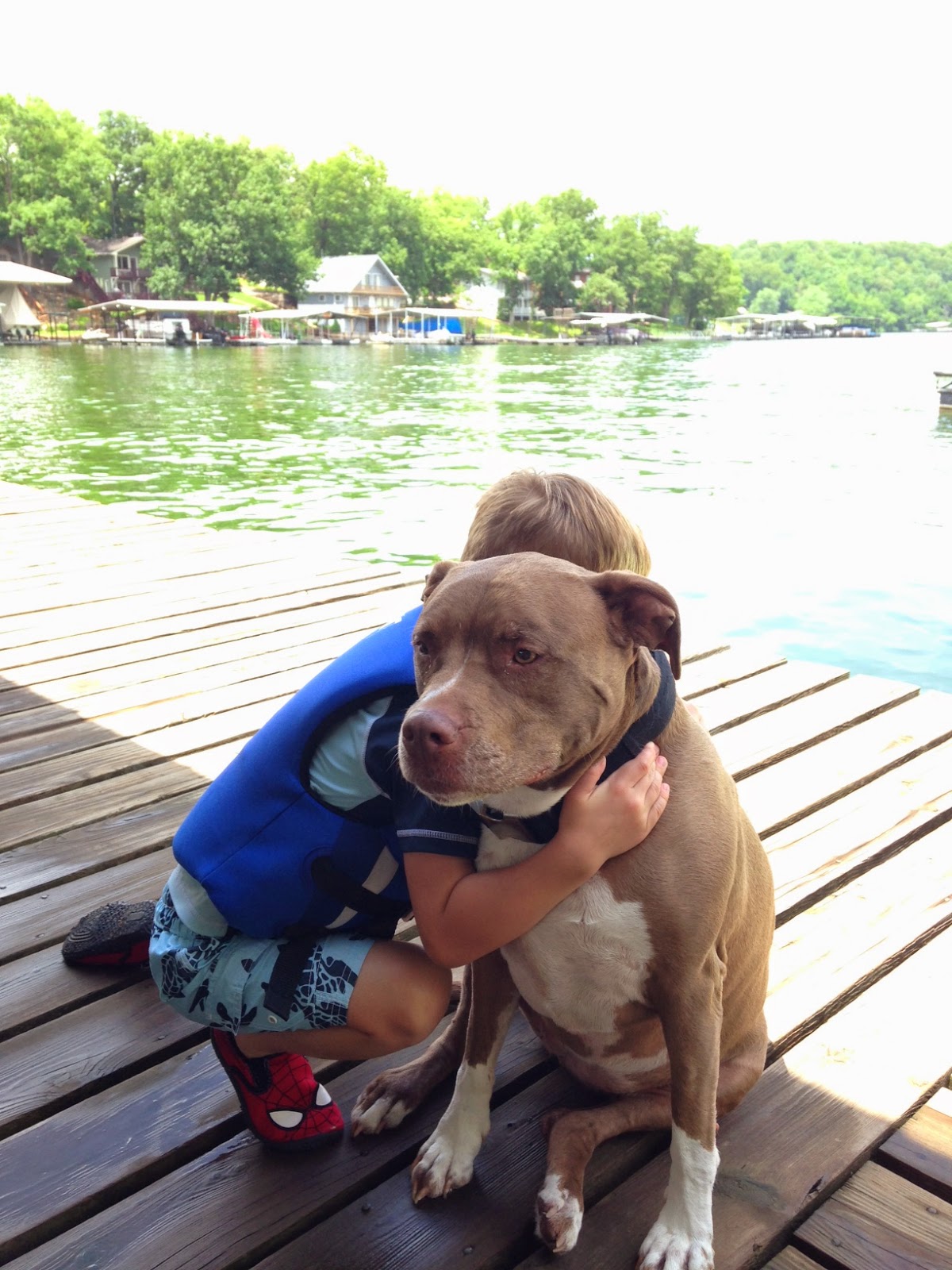 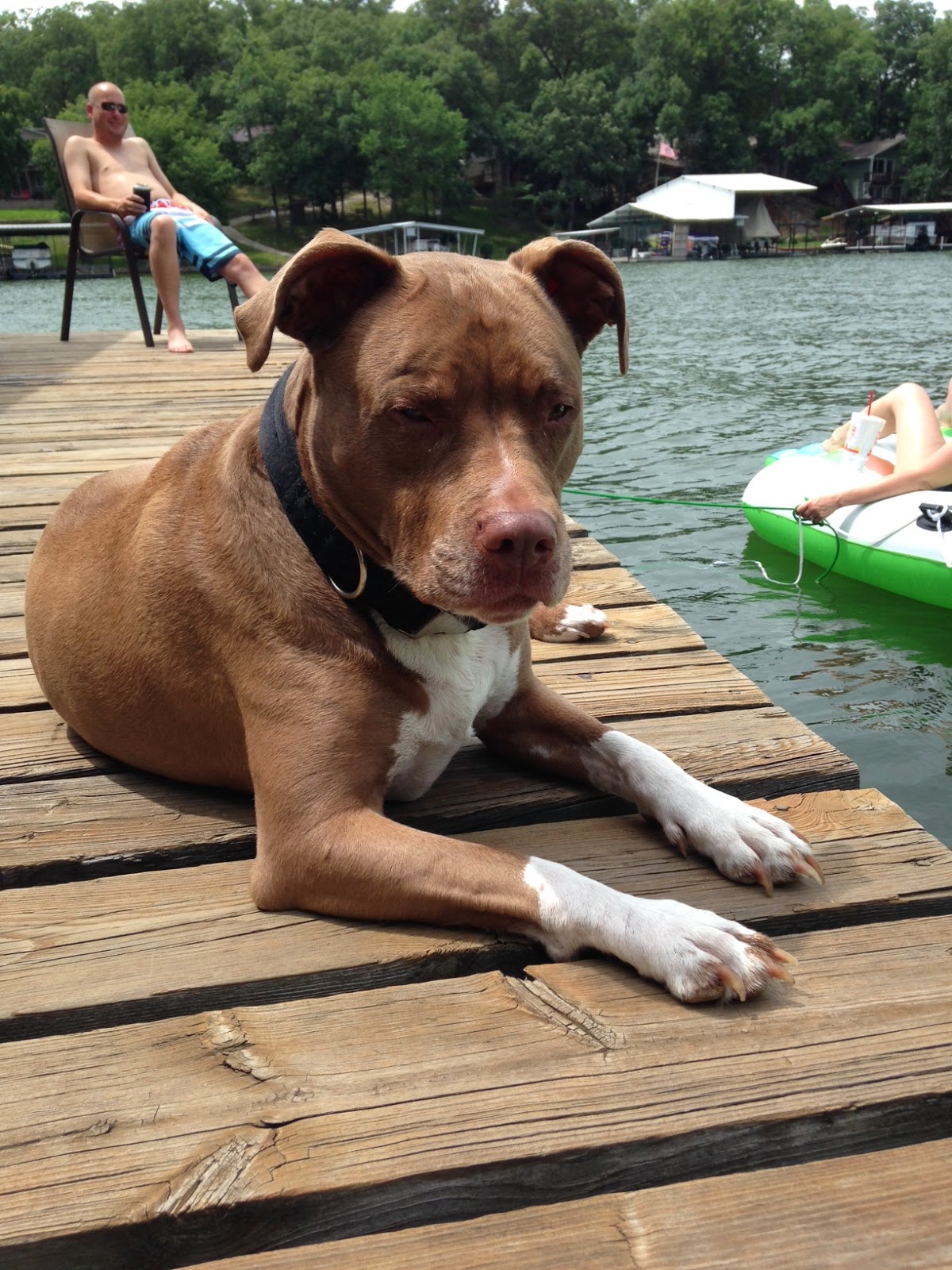 & while the two little boys rested Kaden got to spend the afternoon with the girls on the water. He became our captain and pulled our floating raft to and from the dock. We didn't particularly need to be pulled back and forth but he enjoyed getting on the raft, jumping into the water, swimming to the ladder and repeating this over and over--at least it made for a nice breeze. He also managed to consume a large number of snacks, all of which I was fully aware of him eating but neither of us anticipated the huge tummy ache later in the evening and him getting sick all night long. & thus making an early night for him & me. Its never easy seeing your little one sick but at one point I had both boys in my lap watching Frozen and there really wasn't anywhere else I would have rather of been.

Since Kaden wasn't feeling all that well and Logan had started saying his belly was hurting (he likes to do EVERYTHING his brother does) we figured it might just be best to take off around lunch time and head back home. Plus it was overcast and the water was sure to be cooler with all the rain we had received the night before. We decided to try out the Jerk Shack for lunch which was right up the road but since we would be eating there, we had to leave Stoli behind for a little bit, couldn't leave her in a hot car. She was a little confused because she just saw us load the cars up with our bags & was not leaving our sides. She wasn't the only one confused though, Kaden and Logan didn't want to leave without her. Finally we convinced them that we would be back very soon to get her & apparently it wasn't soon enough because the moment we got back in the car to go pick her up, they both were letting us know just how much they missed her & they made sure to show her too with a giant hug when we walked back through the doors.

So the weekend had its ups---hanging with friends, swimming and sunbathing & it had its downs---the rain & Kaden's sick spell. And as good as it is to get away for a few days, its ALWAYS great coming home. 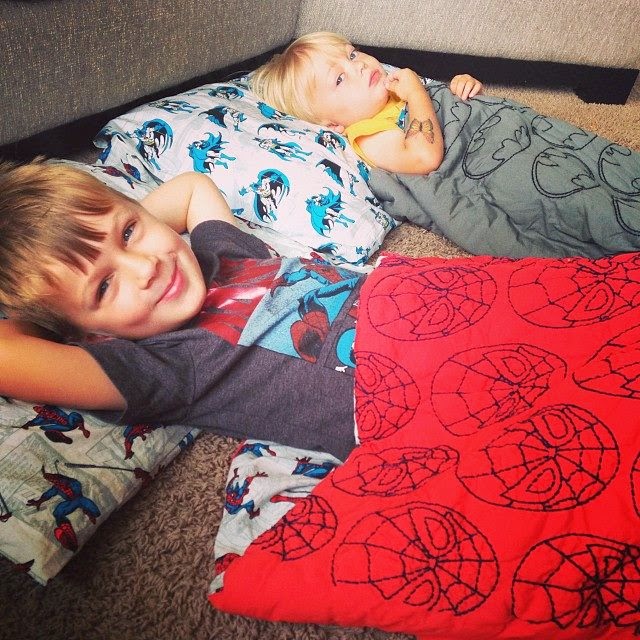 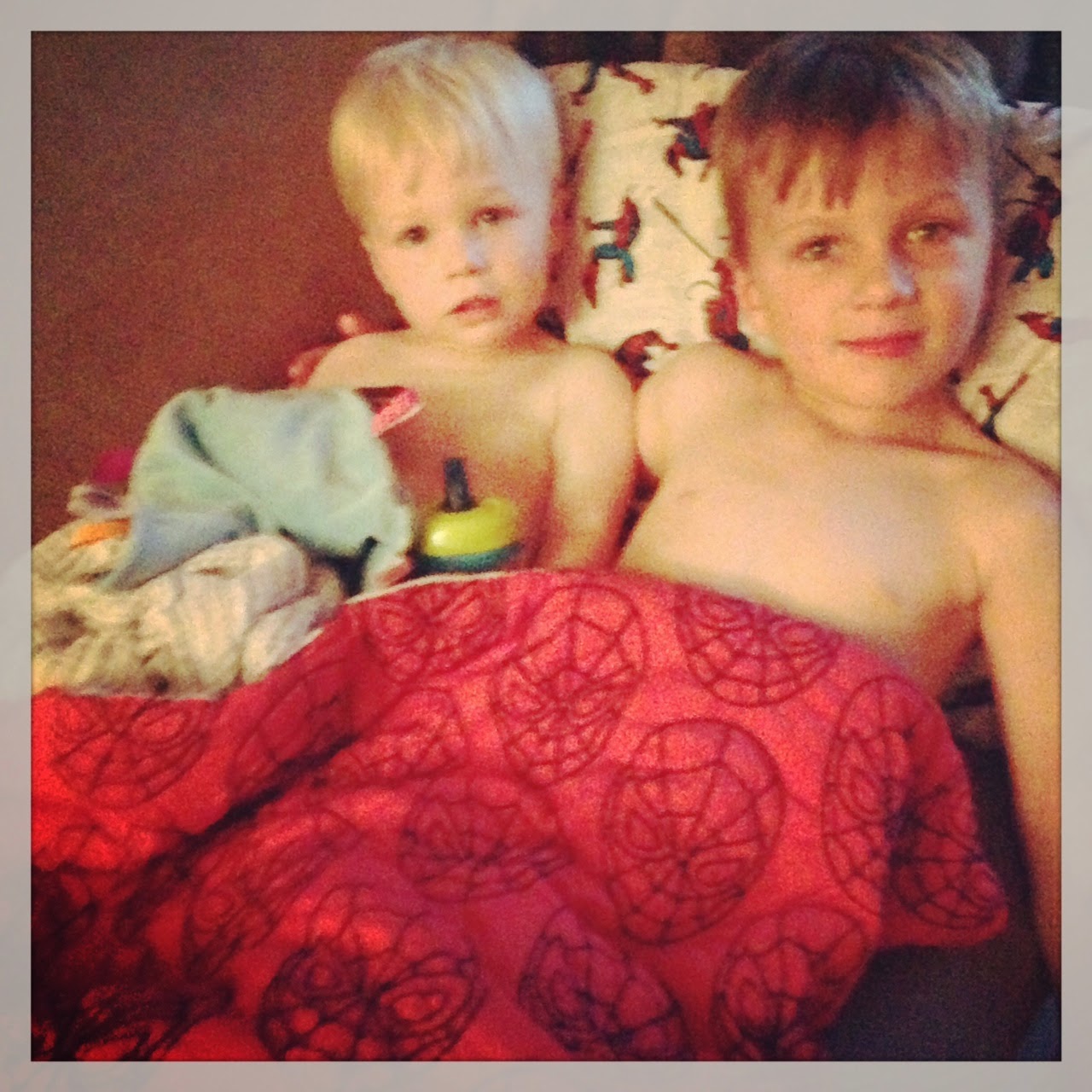 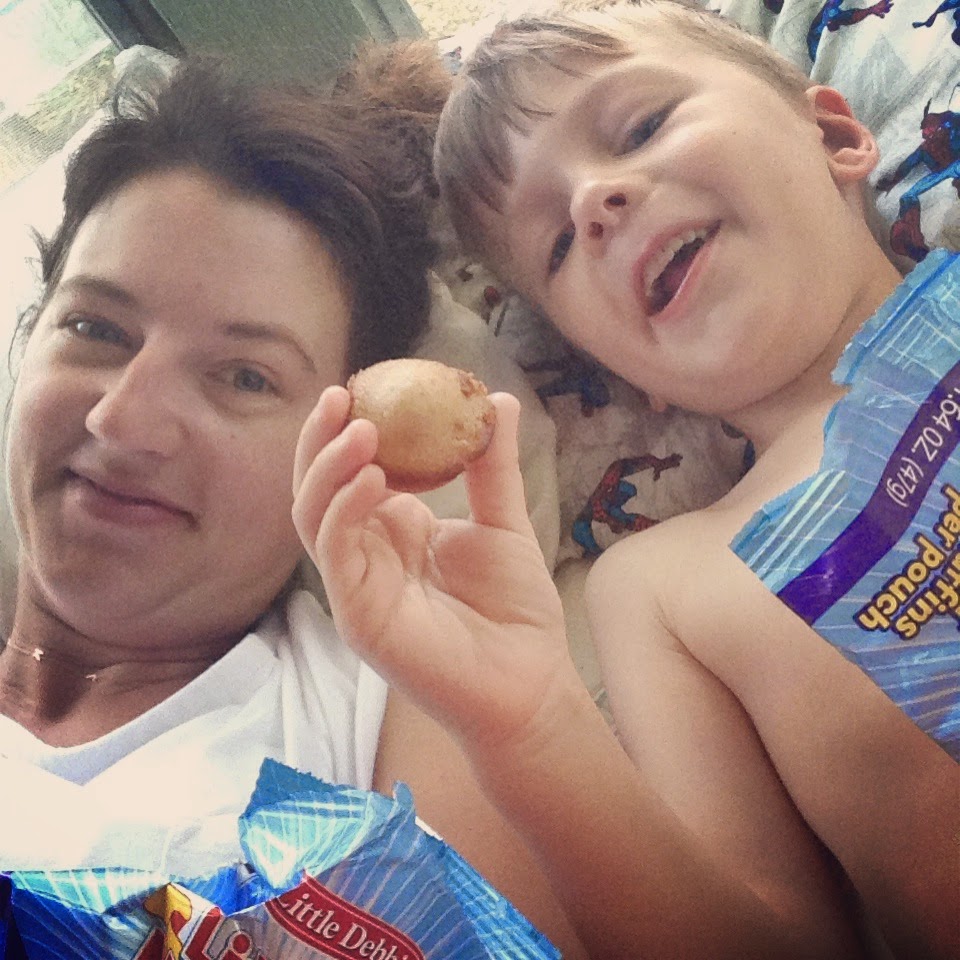 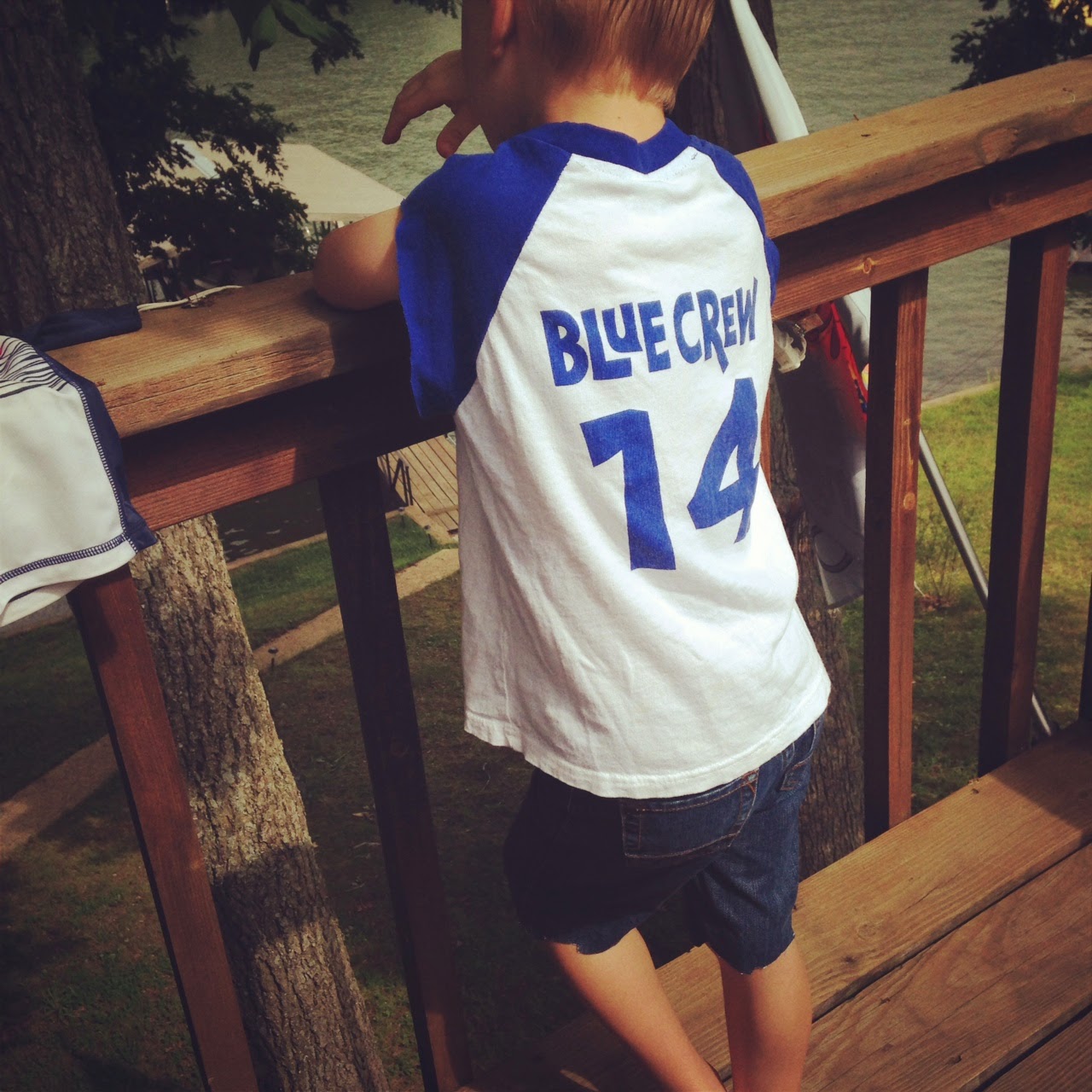