& it hasn't stopped and thus this post is more than a week overdue!

It doesn't happen often but over Memorial Day Weekend I wound up with a 5 day weekend. Our daycare provider had Thursday and Friday off which meant we didn't have anyone to watch the kids, so I took off. We started Thursday off with taking donuts to Grammy's class. This would be the last day she would have kids in her classroom, she was finally retiring! We thankfully beat the rain & showed up with 3 dozen donuts & a large diet Sprite, diet cherry drink from Sonic. Grammy wasn't the only one excited to see us, the sixth graders were pretty stoked about their sugary treats too! 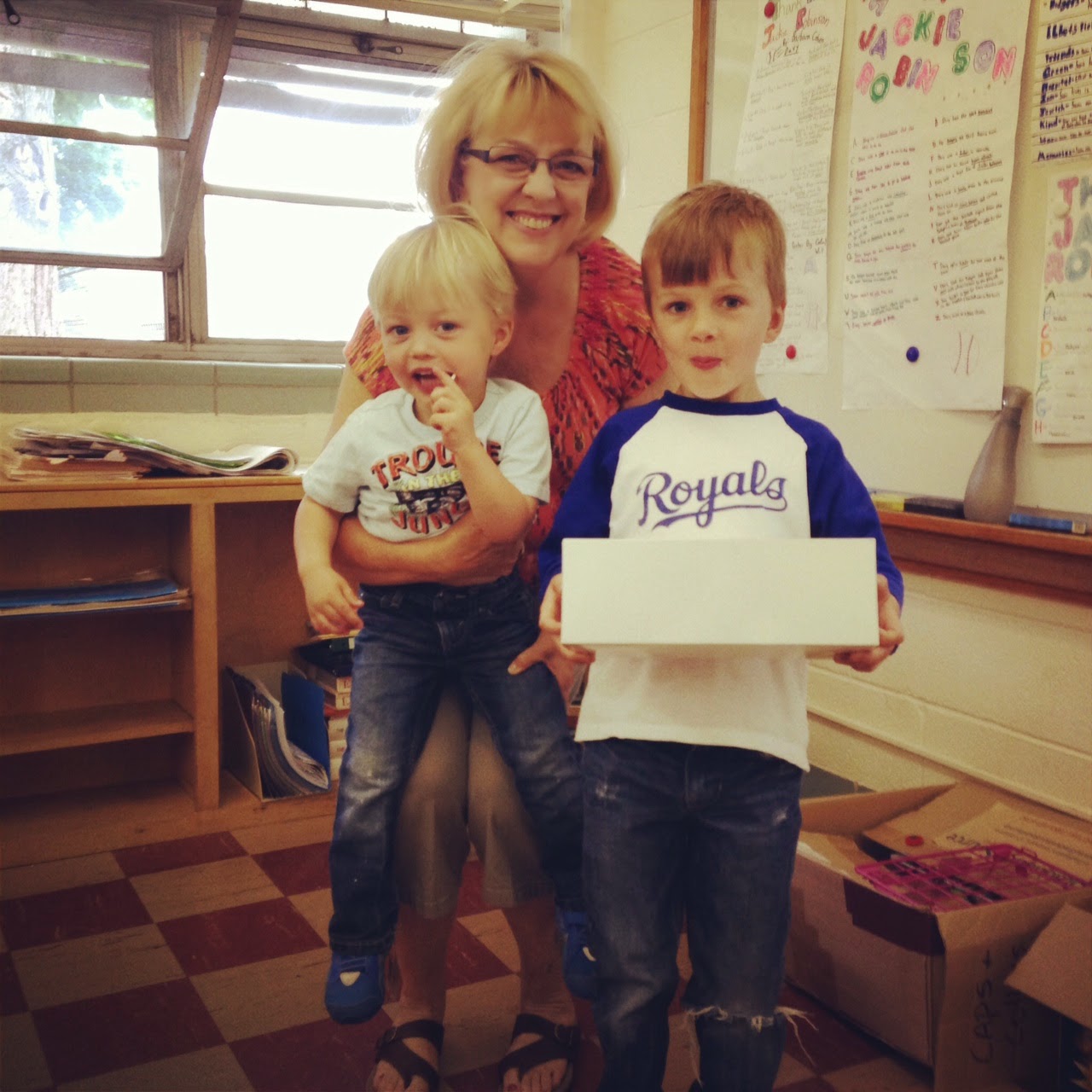 & then it was time to burn off all that extra sugar--off we went to Monkey Business where Miss Madi & Mr. Bennett met us. The kids ran and ran. & I swear they were covered in sweat within the first 10 minutes of arriving---I am not sure who they get that from. 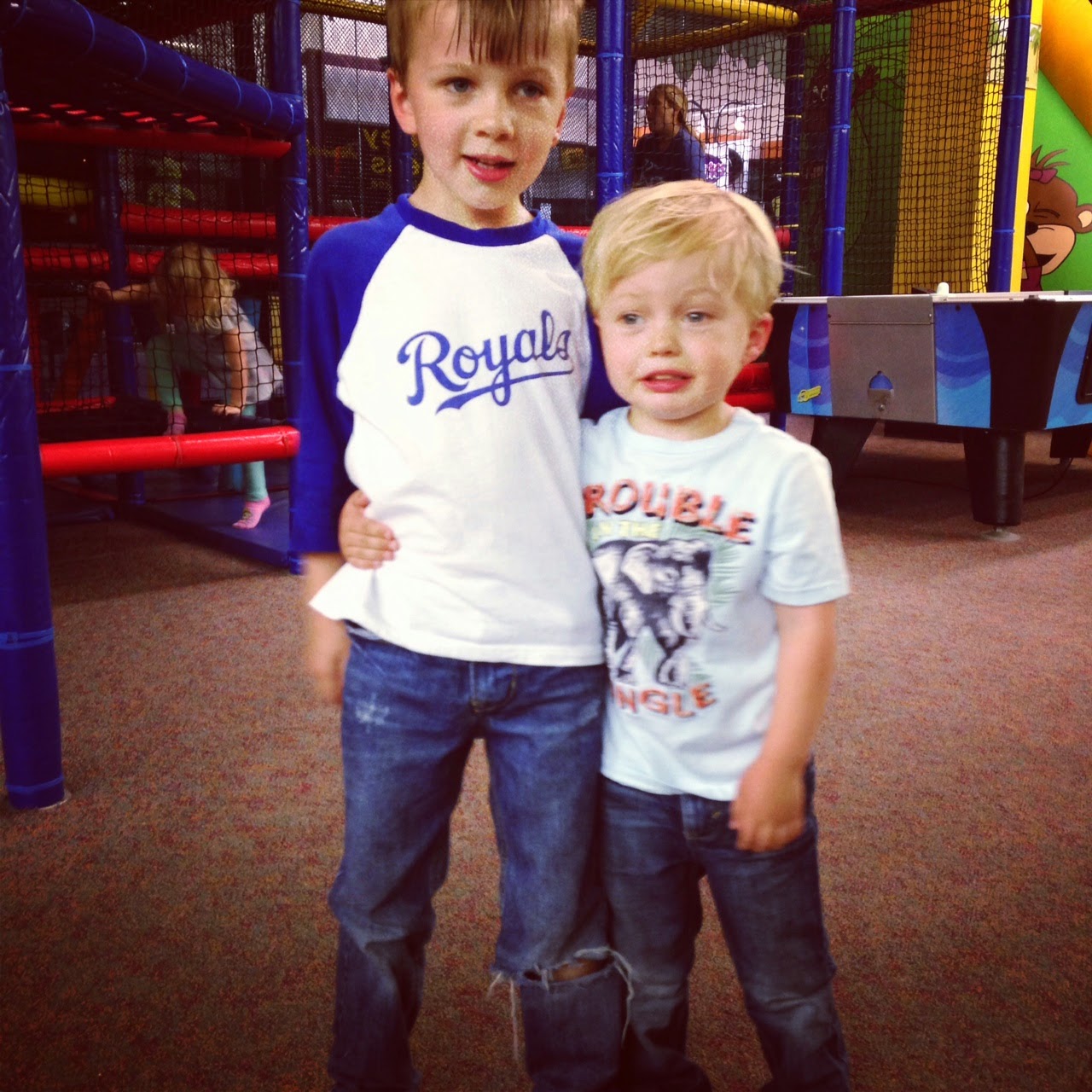 We spent the afternoon and evening relaxing and packing for a quick 24 hour trip back to SWMO. My mom had called earlier that week and mentioned they would be taking flowers out to the cemeteries & as odd as it may sound, its actually one of my favorite things to do when at home. But more on that later because before we took off for Grandma's and Papa's we had a very important celebration to attend.

Friday morning we met Grammy at her school, also Kaden's pre-school. It was the end of the year school mass & the were going to recognize Janet for all her dedication over the years---I mean we are talking 41 years total, 39 of which were spent at John Paul II. Pretty sure its safe to say that she has made a lasting impression at that school and she will be greatly missed. 41 years. WOW.

After Mass let out we loaded up the car and headed down 71---I will always refer to it as 71 to see Grandma Sara, Miss Madison and Bretters. Before pulling in the drive way we made one pit stop, Bamboo Gardens. 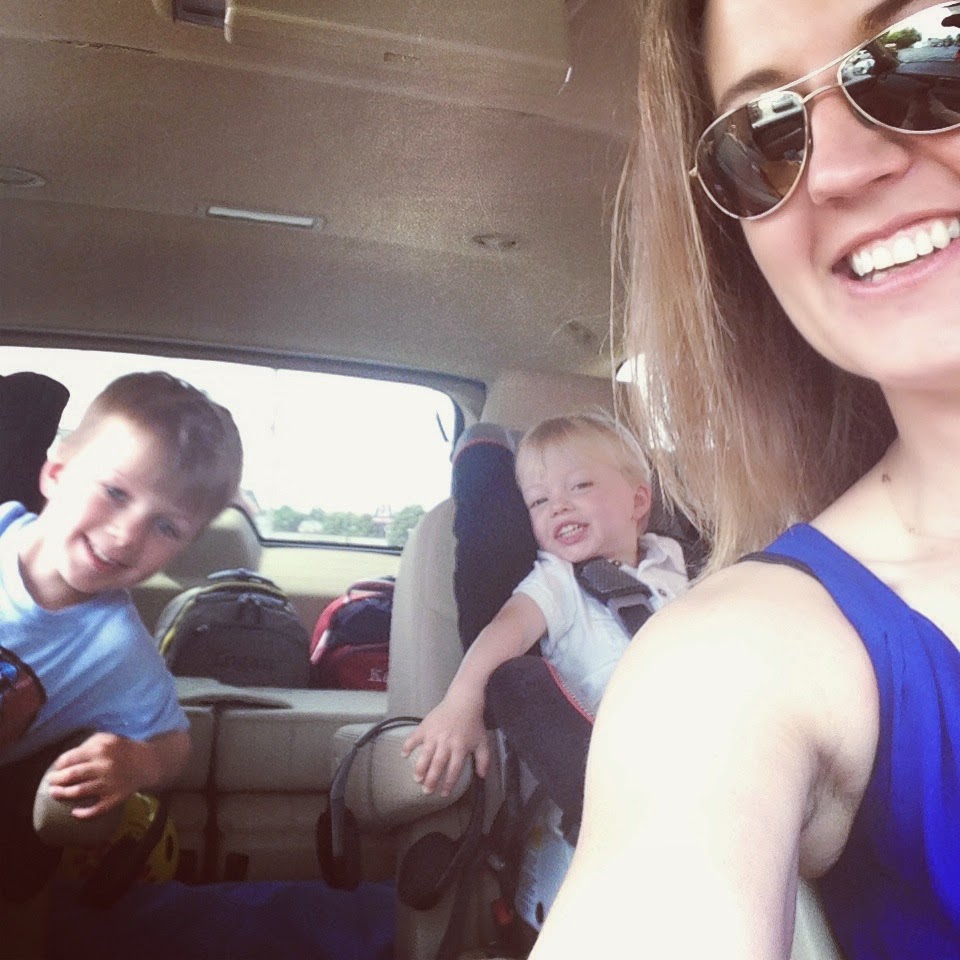 Each time I go home I try and at least hit up one of my favorite restaurants while in town & this time, I got both--thanks to my dad.

The kids barely napped, they played in water--one half naked, one naked, they learned how to pee outside, you know, regular boy stuff. 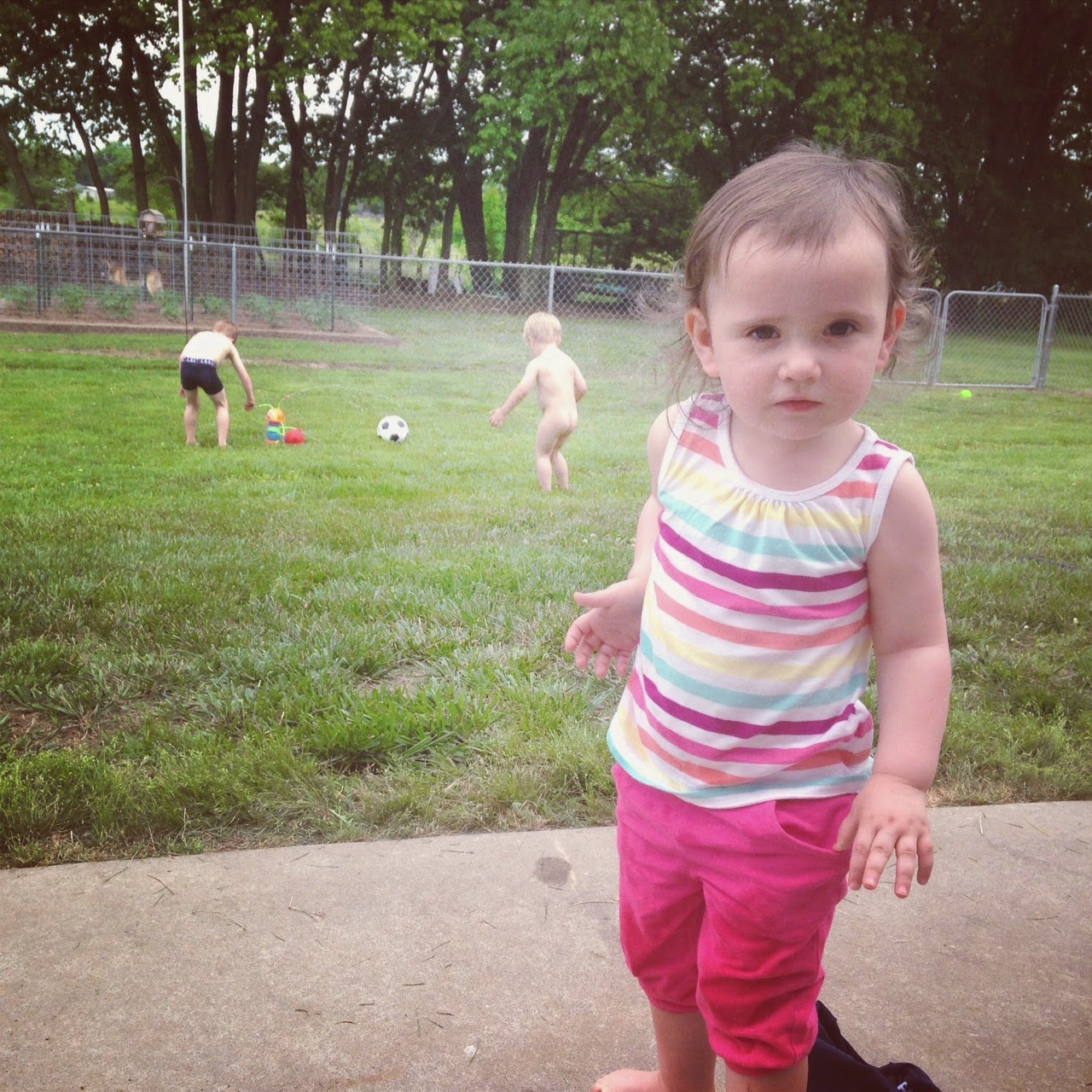 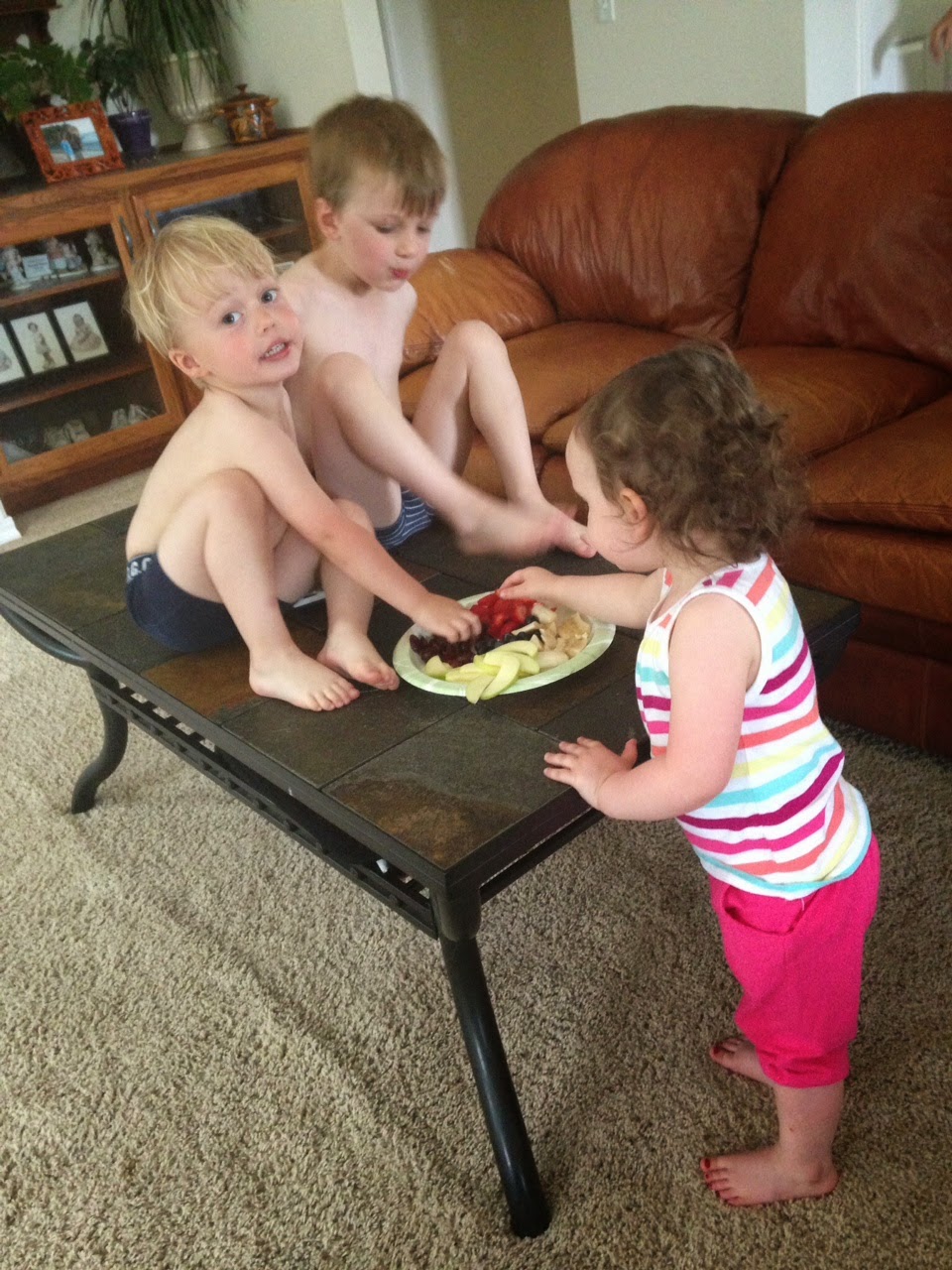 & when Papa Tom got home from work the boys ran straight to him and asked for sucker. I think they may have had like 3 suckers in 10 minutes, no joke. He can't tell them no & I can't tell him no. 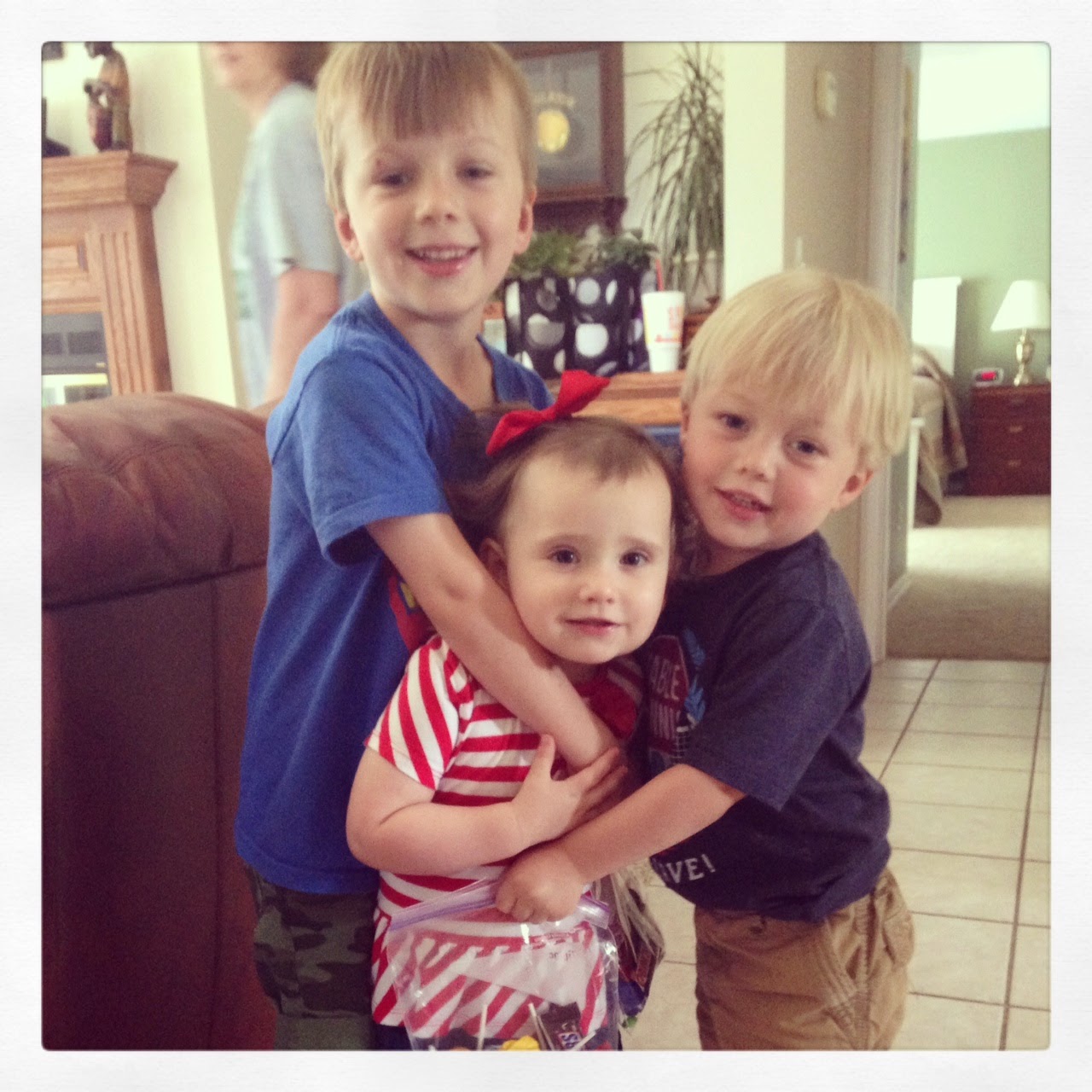 Once Zack and Lindsay were at the house we piled into the cars and off we went making our rounds to the local cemeteries. My Dad's car went to get Papa Richard and my car went to Sonic--Papa Richard needed a Dr. Pepper.

It may sound weird but this is one of my favorite weekends to visit home. Often times when we see Grandpa Richard it is SUPER loud at our house with kids running everywhere and he kind of stays quiet. On these trips, he does a lot of the talking. He tells so many stories about growing up and more importantly I find out about all my family, for example, I was born on my Great Grandpa Floyd Thomas' birthday. That my Grandpa Richard was not only a twin but his Mom gave birth to another set of twins, but unfortunately only lived a matter of a couple of days. Sure, there are sad stories but you can just see how much he loves talking about his childhood and all the days that have followed. 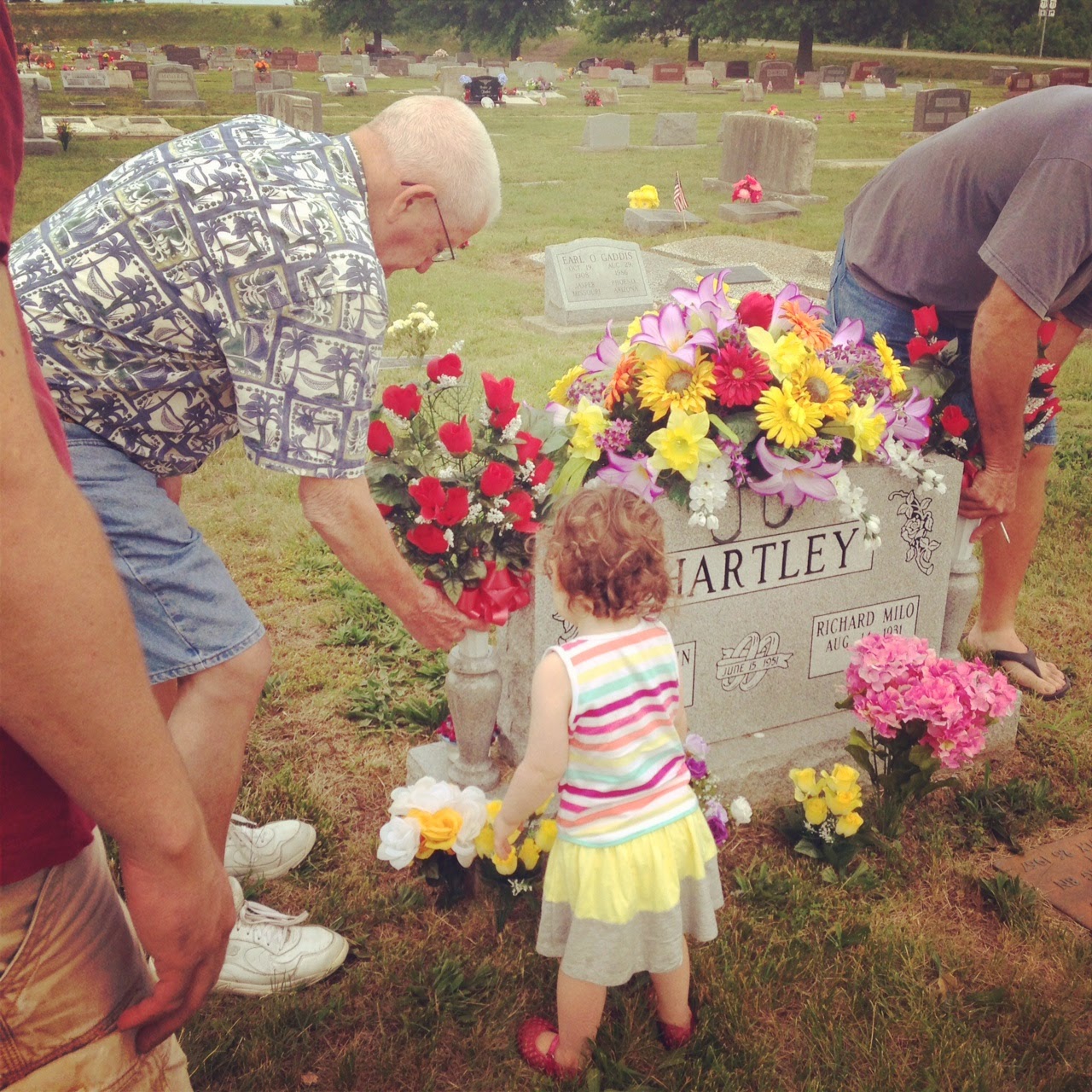 Our 24 hours were up but before we pulled out of the driveway we got a special surprise--Grandma Earl and Aunt Pam had arrived! We didn't get to talk to them for long but it was so great to be able to hug them and tell them how much we love them in person! 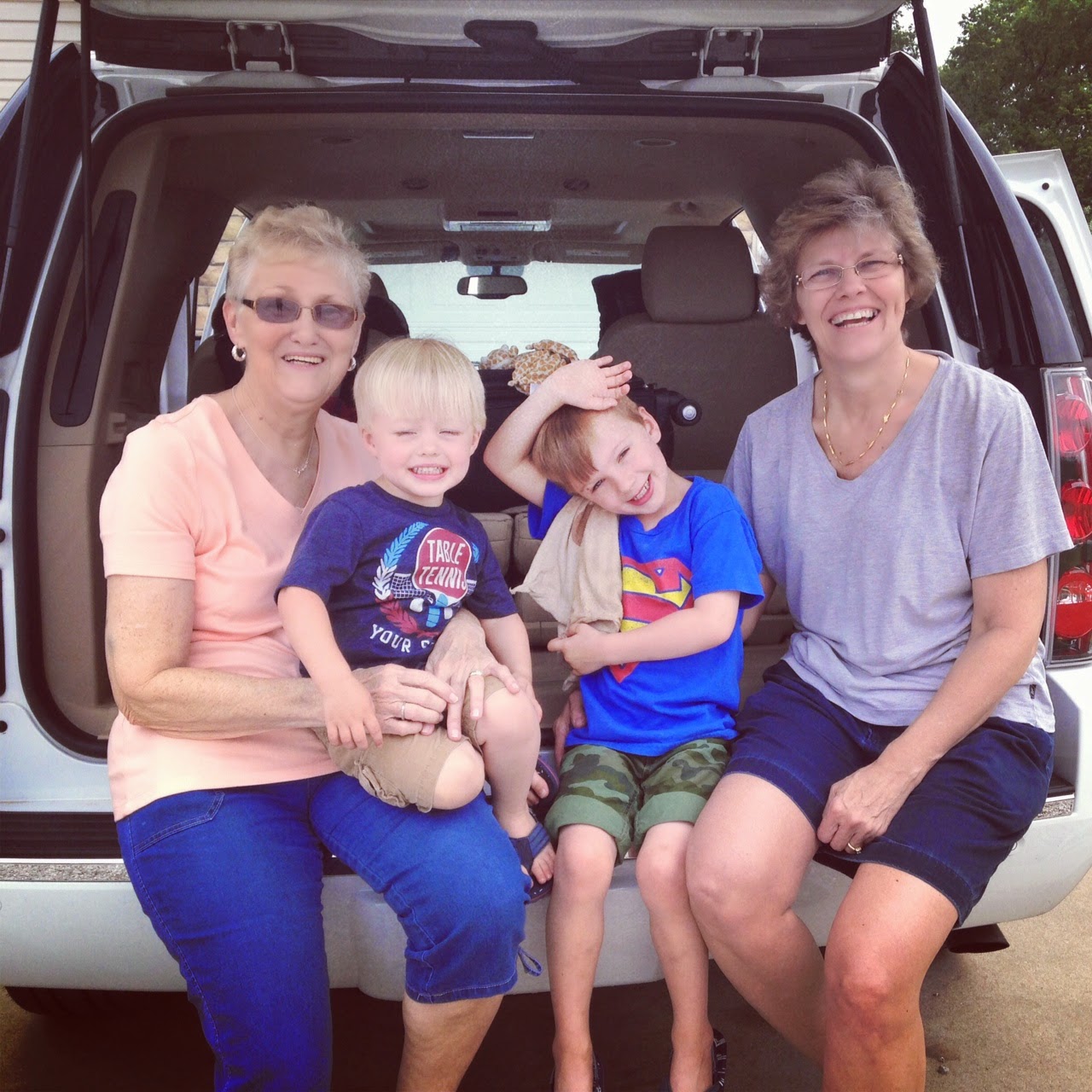 Our time was officially up,we had to get back to KC for a very special birthday party--Mr. Nathan was turning two--choo, choo but what does one do when you have a 3 year old that is sound asleep and a 4 year old that has to pee  "REALLY, REALLY BAD"---you pull over & let a boy be a boy. 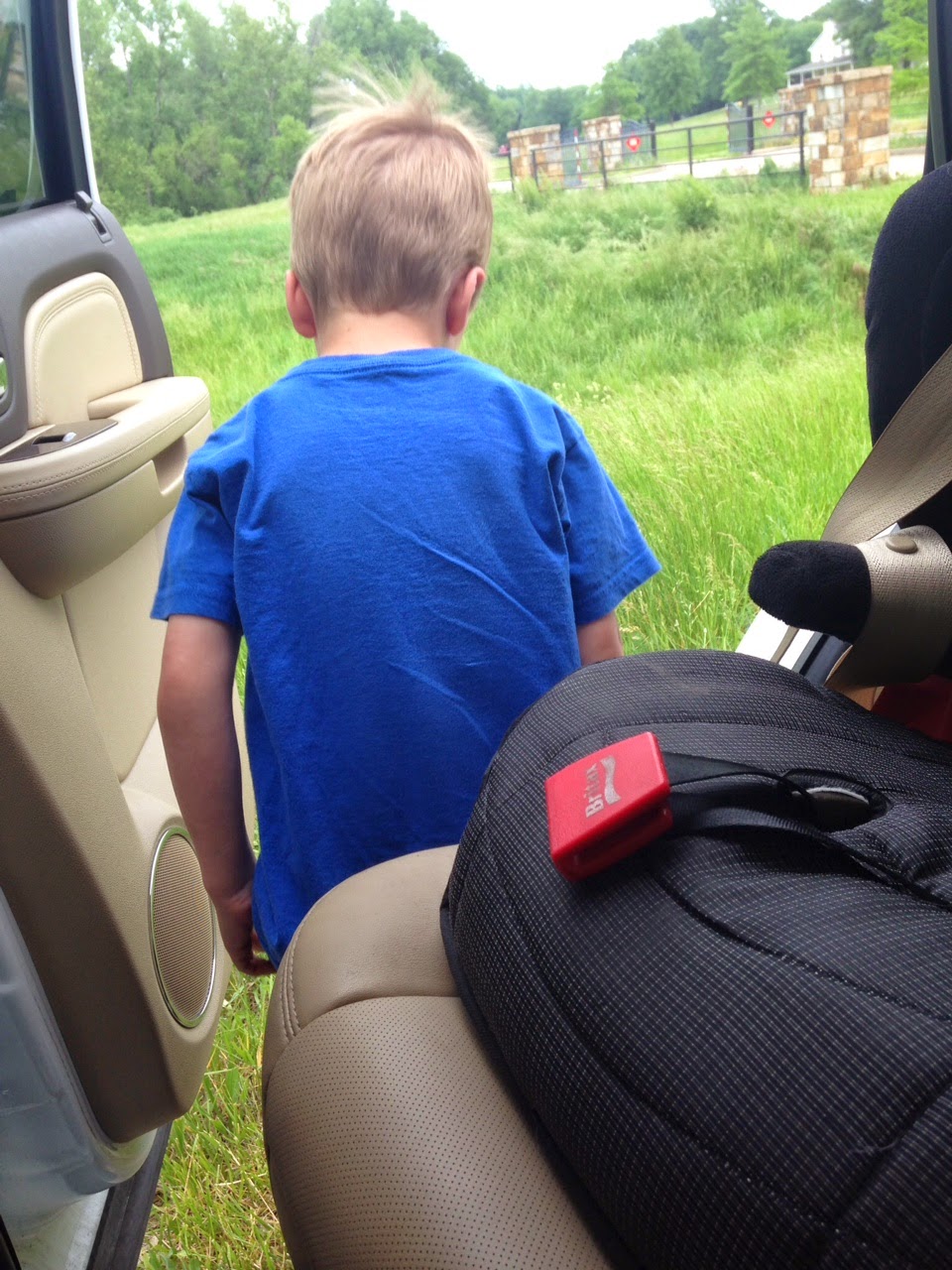 Outside of the birthday party the rest of the weekend was spent at the pool with the kiddos. I guess I did manage to sprinkle in a little photography session with our newest little friend, Breck. 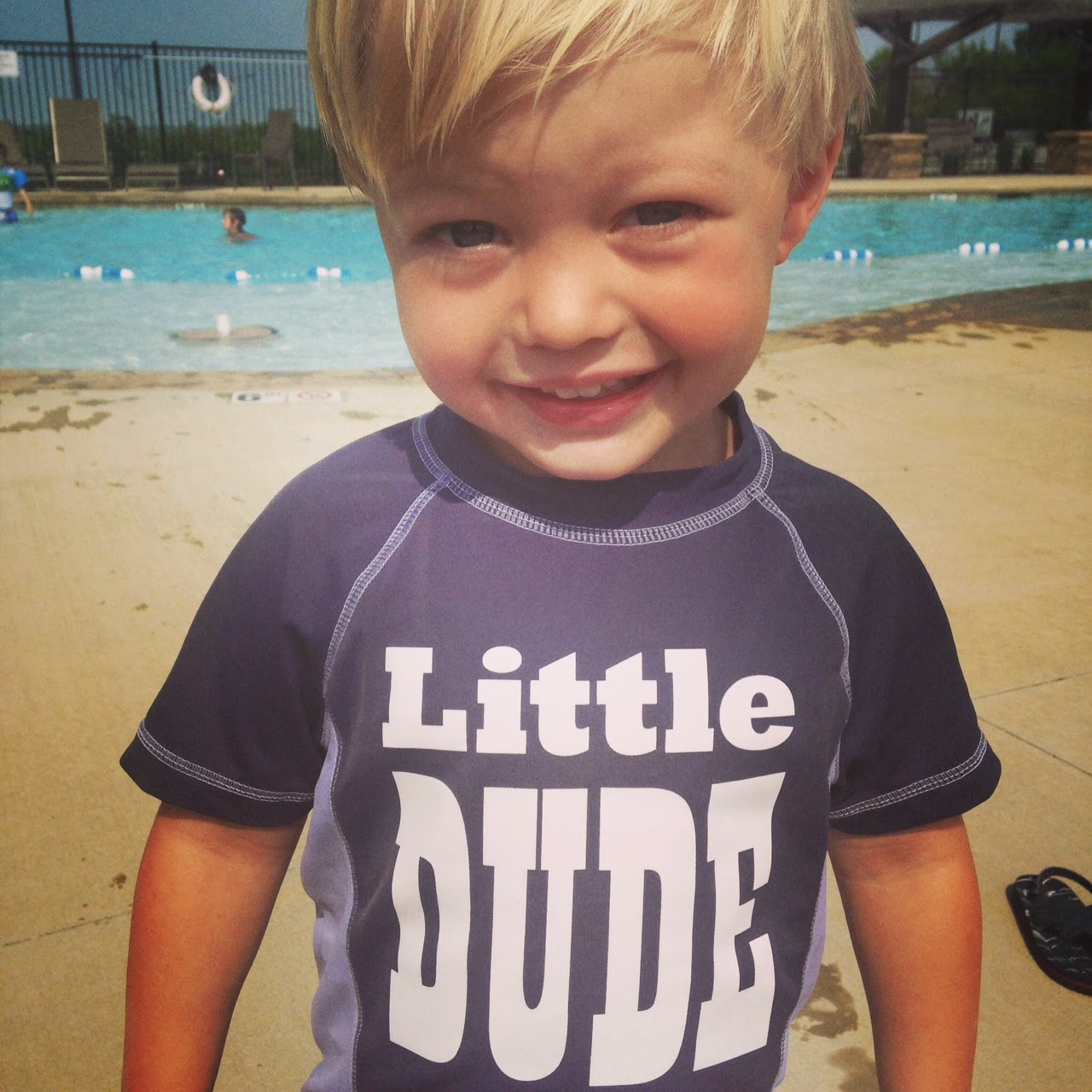 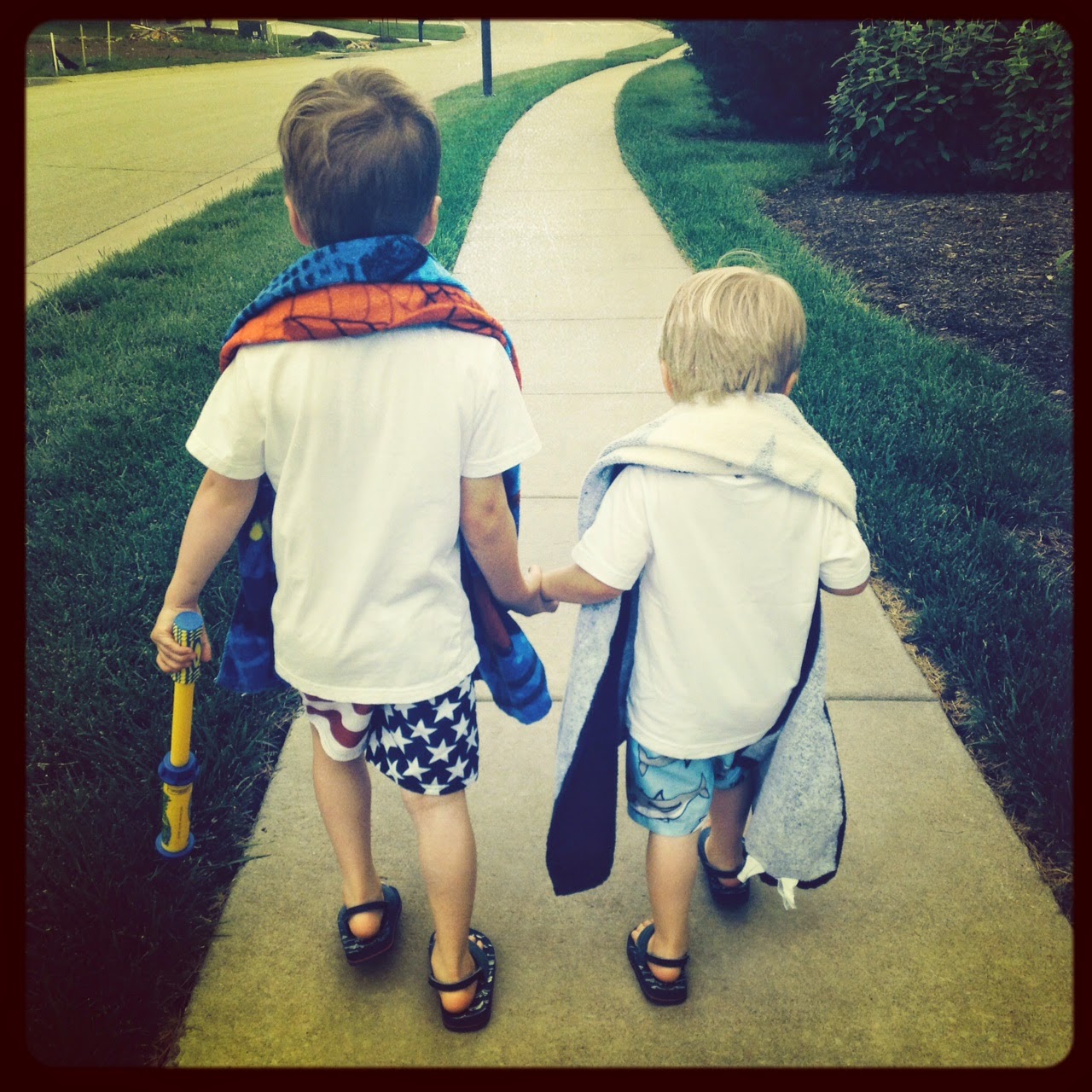 One whirlwind of a weekend but so, so much fun. Just wish it could have lasted longer.