This past weekend turned out pretty darn spectacular even after starting off a little bumpy. You see we were supposed to have our "family" from Wisconsin staying with us for a few days, they were attending a special wedding and we were going to get to watch the kiddos. We were so excited & then as life typically happens, the kiddos got sick and their Daddy decided to stay home and not try and make the 8 hour drive. I don't blame him but it certainly was disappointing since I couldn't wait to be covered in sparkles again and get my morning hugs from this little diva. 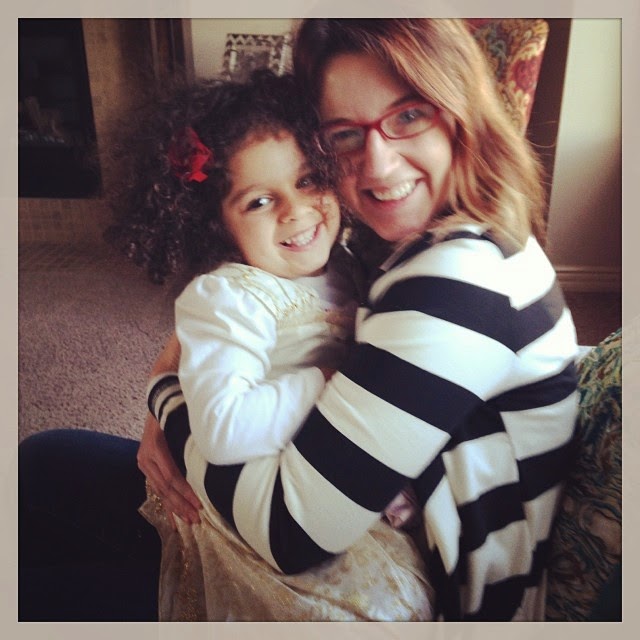 Now that we had absolutely nothing on our weekend agenda we started to brainstorm about what we should do. In the end, we stayed around the house and went to the pool. Multiple times a day.

Logan and Kaden both had just finished a weeks worth of swim lessons and let me just say, they did amazing! Kaden was already a little fish but his confidence grew and he learned a few new tools. Logan, well, he didn't want anything to do with the water unless he had a death grip on me or his Daddy. He didn't want anyone else holding him and every five minutes he would say to us, "Don't drop me Mommy." or "Don't make me fall." & honestly, I am not sure why he says these things because I have NEVER dropped him but he does.

Luckily, Ashley came to the rescue. She had him floating on his back (with the help of a noodle and her support) by the end of the week. He was jumping into her without holding onto fingers and had some new found confidence. It was great seeing him smile & watching as he grew more fond of the water. 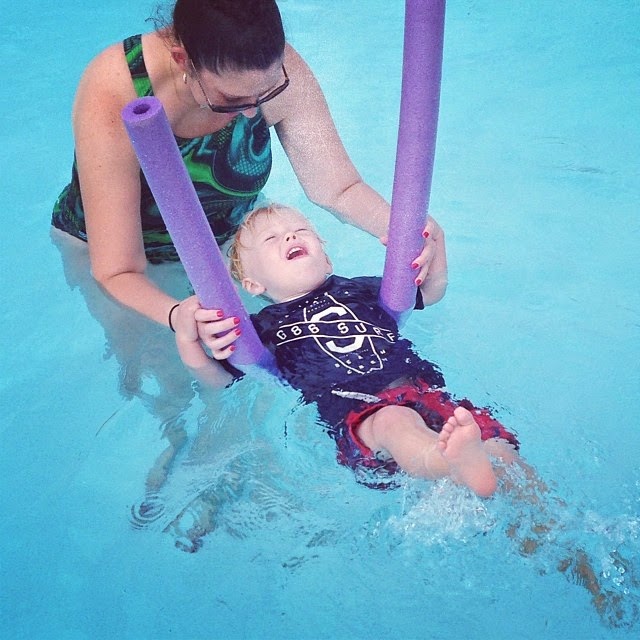 On Friday night while we were at the pool he wanted me to hold him without his life jacket on and I did. But he wasn't having much fun and he was starting to get heavy, after all, he was soaking wet. I managed to get him to try on his life jacket and I told him I would hold on this his back but that he could kick his feet and run in place. After a few minutes of him doing just that, I released my grip, without him knowing. As I stepped a few feet away and started talking he started realizing what had just happened. I quickly and excitedly yelled, "YAY, Logie! Look at Logie, Daddy. He is swimming all by himself!" Both Justin and Kaden started clapping for him and from that moment on he didn't want anyone touching him! Me do it all by myself.

Saturday after naps we headed back down and spent almost 5 hours at the pool. Grammy, Adam, Becky and Colton joined us too. We ordered a couple pizzas and we just hung out at the pool. Logan met a new friend. & when I say met, I really mean he followed her EVERYWHERE. Good thing she was nice and allowed it. She would go up the ladder and back to the steps. Logan would go up the ladder and to the steps. She would make her way to the middle of the pool & about 2 feet behind was Logan calling for her to "Wait up, I'm coming. Don't leave me." For two hours these two played and chased each other around the pool & Logan had a permanent smile on his face. Lucky for us, well me, she lives 800+ miles away and I don't have to worry about another girl working herself into his little heart just yet. 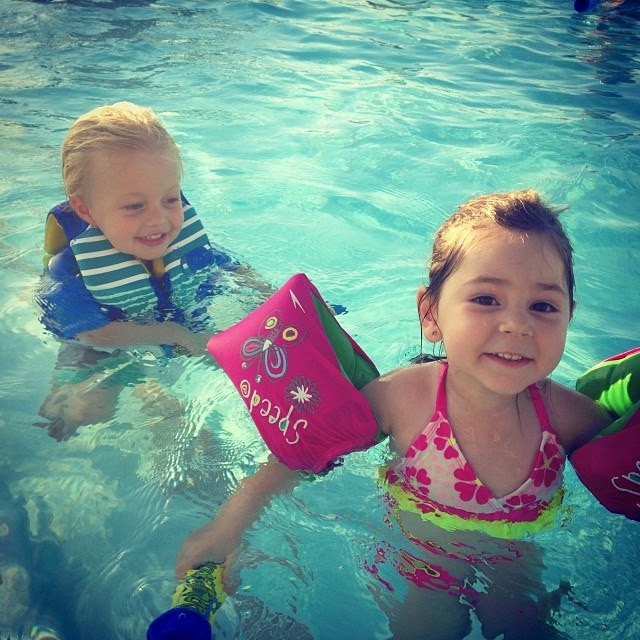 He did manage to take a couple breaks from chasing his new girlfriend but only for pretzels and pizza. & as long as I have pretzels on my side, I will always win! 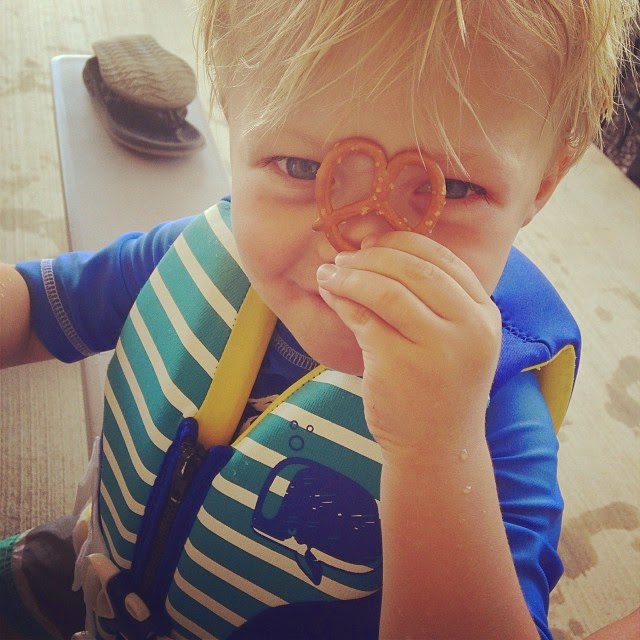 I can't tell you how much fun Saturday evening was. We just relaxed with our kids splashing around us. We were all in the pool, wet, and having a great time. We took jabs at one another but it was all in fun and made for some great laughs. Saturday was so much fun, we decided to do a repeat on Sunday & we managed to pick up right were we left off. 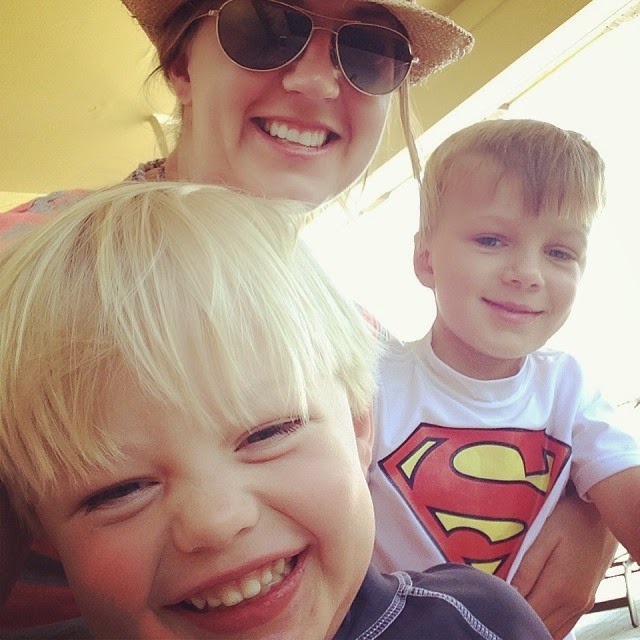 But instead of pizza, Justin went home and made Guac Burgers-delicious. While he ran home the boys continued to play and make memories. Colton looked at Kaden and asked, "You wanna jump in holding hands?" & I quickly ran to get my phone (and a towel) to capture the joy. 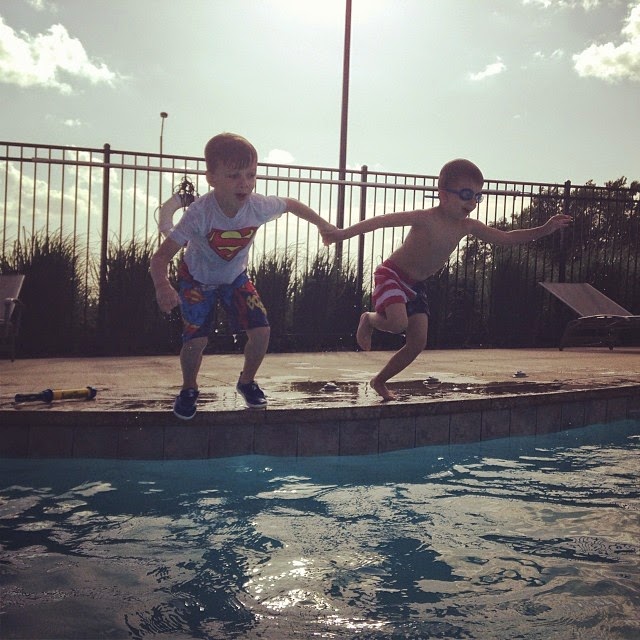 The service that morning at church was centered around JOY & how we often have cases of TIFG--Taking It For Granted.

Scripture says: This is the day the Lord has made. Let us rejoice and be glad in it. Psalms 118:24

It doesn't say yesterday or tomorrow, it says THIS IS THE DAY. Our teacher that day spoke about the "Do It Again, Dad" phrase and that often times, this request comes at a time of complete joy. And how when you hear "Do It Again, Dad", to do it again, because you will never get that moment back.

That afternoon, Justin was throwing Logan up in the air and he yelled out "Do It Again." and our eyes met, Justin smiled and threw him up in the air a half a dozen times more.

This weekend wasn't about striving to be happy, it was all about the JOY.