Each year I take off on Logan's birthday--usually on Kaden's too but the last few years his has fallen on a weekend--& we make it a mommy & son day. It's not often that I get a full day of one on one time with either of the boys, just them and me & I thinks its important for them to have that time. No one to talk over them. No one to distract them. & more importantly, no one to distract me. I am all their's. 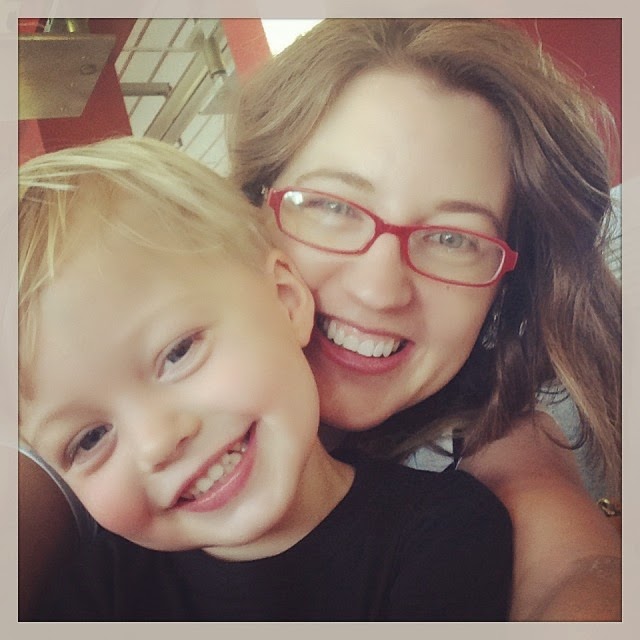 These days have by far become one of my most favorite days of the year & I am pretty sure I get just as excited as they do.

This year Logan had three requests, to go to "Mommy's work", to eat lunch at "train place, me want french fries & milk shake" & to eat dinner at T-Rex to see the dinosaurs.

Our first stop of the day was at Kaden's pre-school to drop him off & to visit Grammy at her classroom. The kids were working on their 8th grade play so we didn't get to see them but Logan did get his sticker for the day.

Up next was a trip to Target. We needed to pick up a few birthday donations & deliver them to Operation Breakthrough. In years past we have asked for donations versus gifts at their birthday parties, we wanted to show the kids the value of helping others and how great it feels to be the giver and not always the receiver. We then realized, that we also needed to teach our children how to receive graciously, not always an easy thing to do. With this in mind, we came up with a different plan, we would allow birthday gifts at the party & then we would do donations on our own, on their birthday if possible. We would take them with us to pick out the donations and to deliver them. 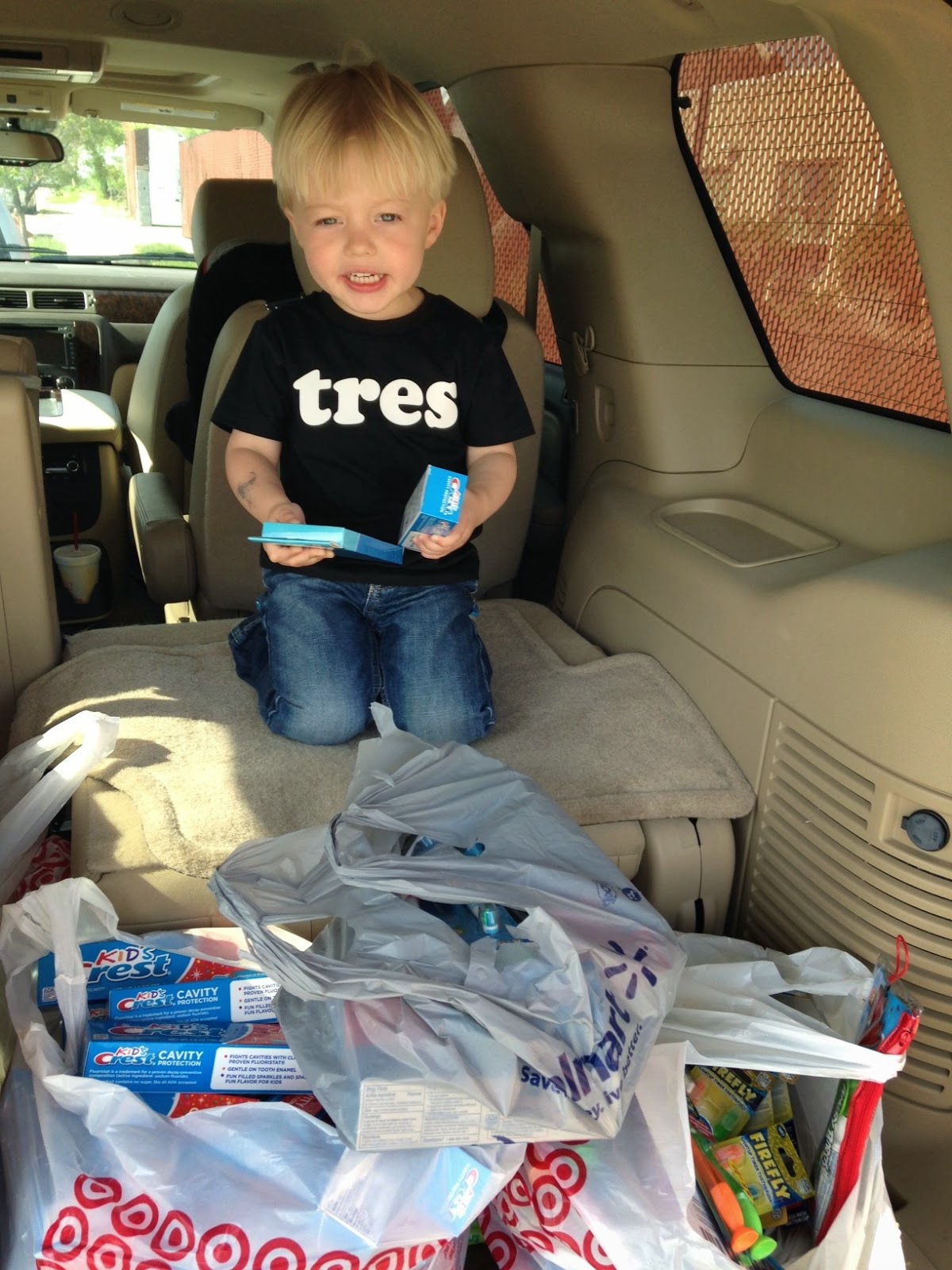 & thanks to Dawn & Nolan who donated a bag full too, we had quite a few to deliver to Operation Breakthrough for the boys and girls there. & somehow, I ended up carrying all the bags while he just looked cute. But he does do a good job looking cute--in his American Eagle jeans and all! 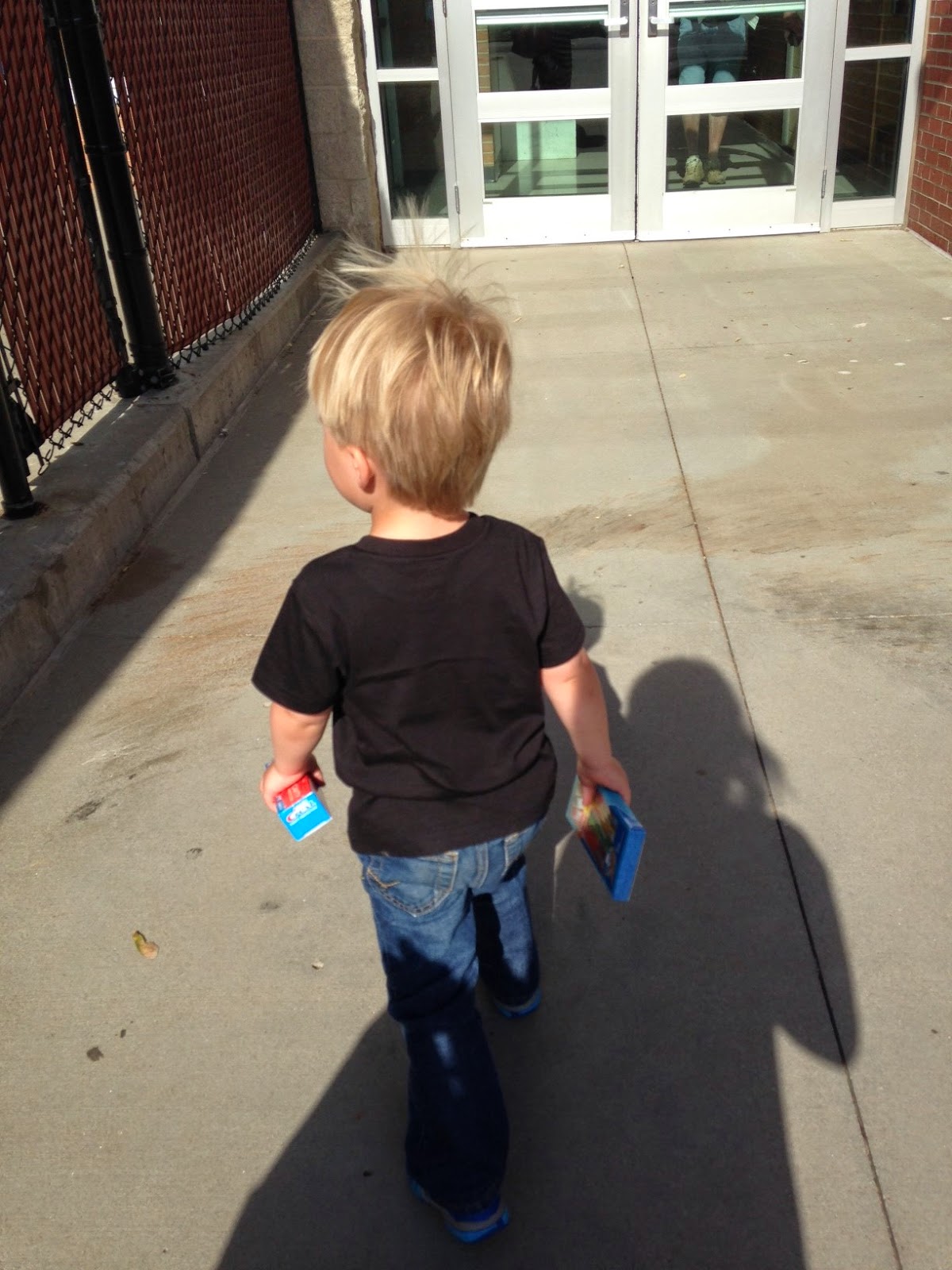 Next up, checking his first item of his wish list, visiting mommy's work. I work with some pretty amazing women who just happen to all have kids about the same age as Kaden and Logan & we love seeing everyone's littles. We may have gone as far as arranging marriages for a few of our kids, Logan being one of them, his girlfriend's name is Lucy. Logan and Lucy. Both with the biggest, bluest eyes & both with the blondest hair you will ever see. Its safe to say that their kids would be the cutest kiddos EVER.

He, of course, had to take his Teenage Mutant Ninja Turtle's sword in with him & I verified, only firearms are not allowed on the premises. By the time we left he had scored a bag of M&Ms, a soccer stress ball, & numerous aww so cute. & the only way I could get him to leave was to let him know what was next on our big adventure--SKY ZONE.


To say he LOVED Sky Zone would be an understatement. We only had about 30 minutes to jump and explore so he went full speed ahead. Coincidentally, we showed up during Toddler Time--Tuesdays and Fridays from 9:30-11-- & it was perfect. There weren't any big kids, actually, not many kids at all. He had the trampolines basically to himself. & although he was sad to leave, he was super excited to keep his cool new orange socks.


It was now lunch time. We headed out to Fritz's for french fries and milkshakes which is exactly what he ended up having. Nothing more. Nothing less. & I love that exactly one year later he is still just as excited as ever to see the trains. 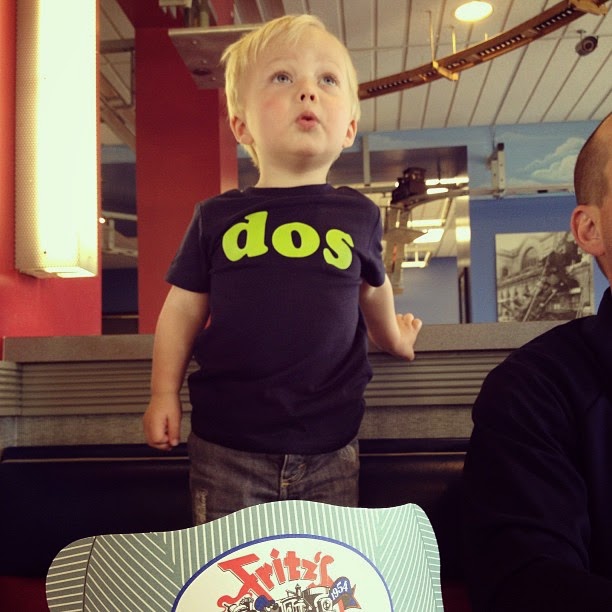 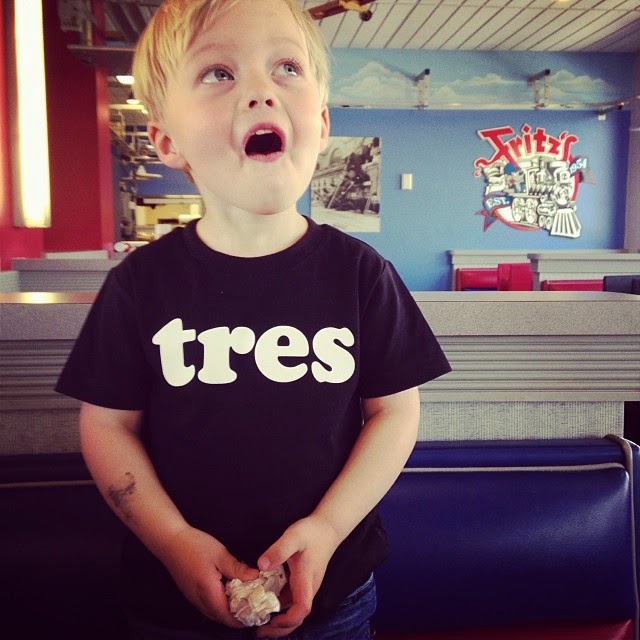 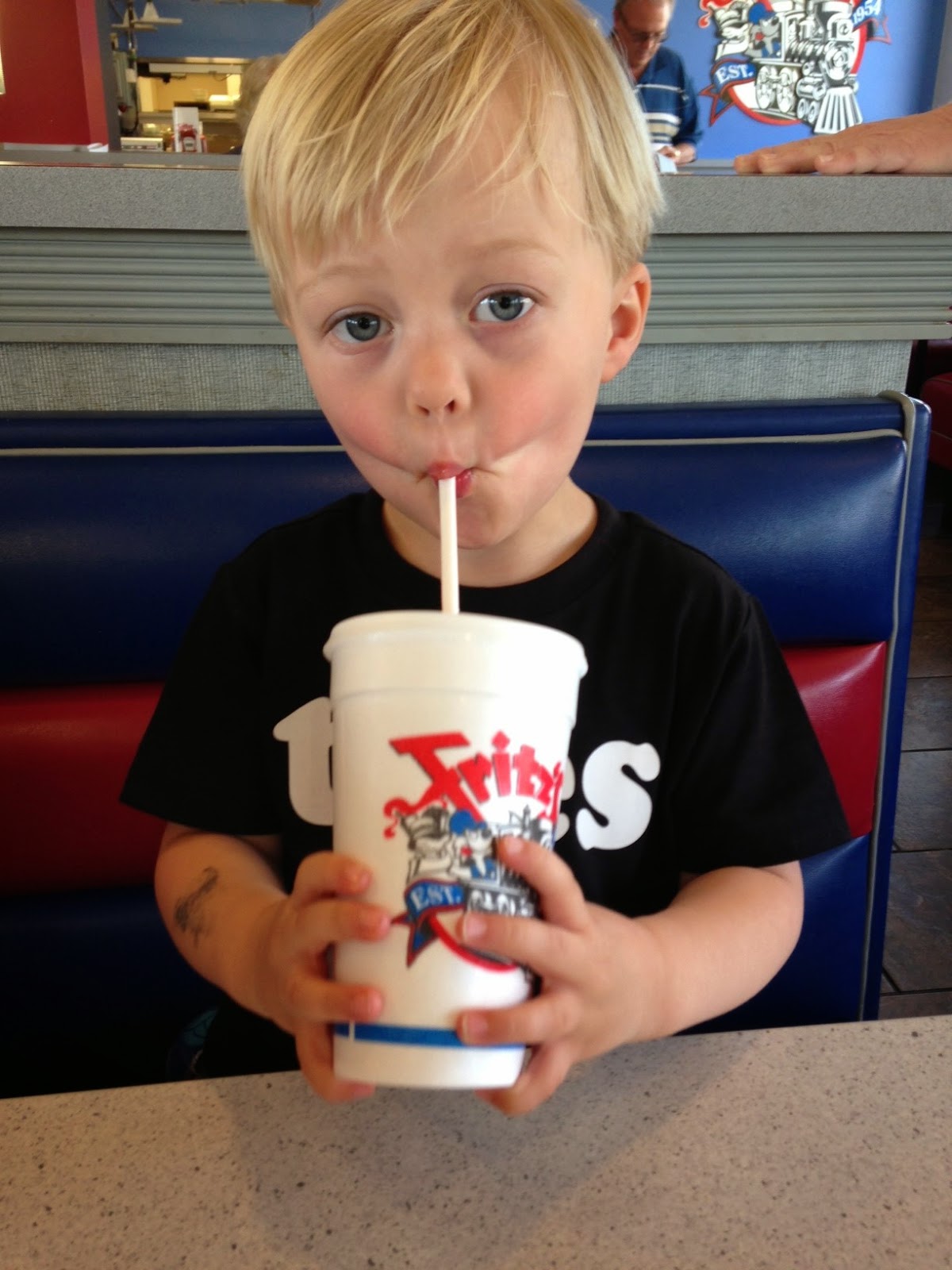 We CHEERED a special toast to being three. 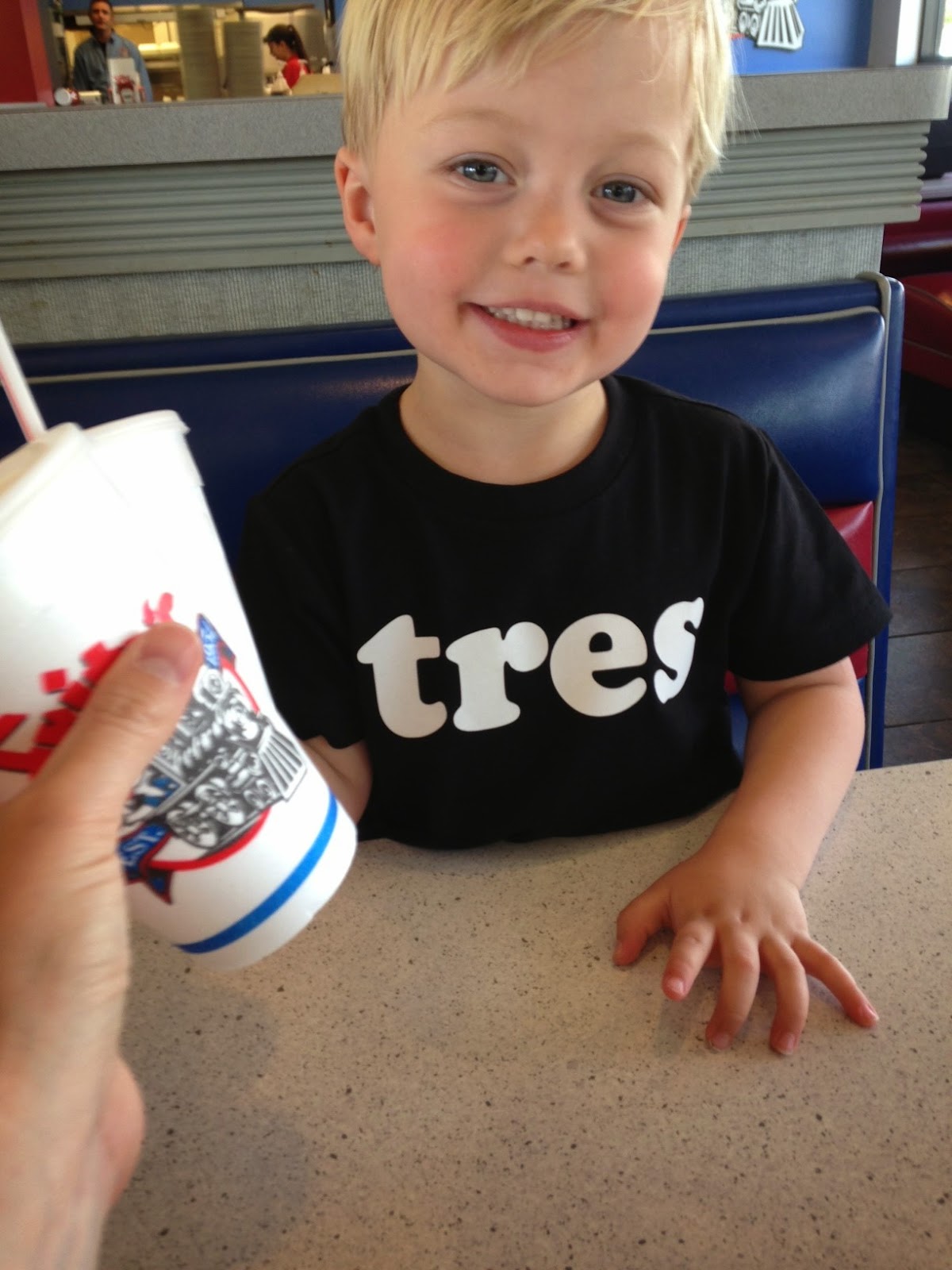 The next part of this guy's special day wasn't all that great but was certainly needed to get through the rest of the evening, Nap Time. After waking up from nap we loaded up in the car and headed out to an early dinner. We were on our way to T-Rex. This time went a little better than the last time. We took Kaden here for his first birthday and there were a few tears, he wasn't a fan of dinosaurs just yet. 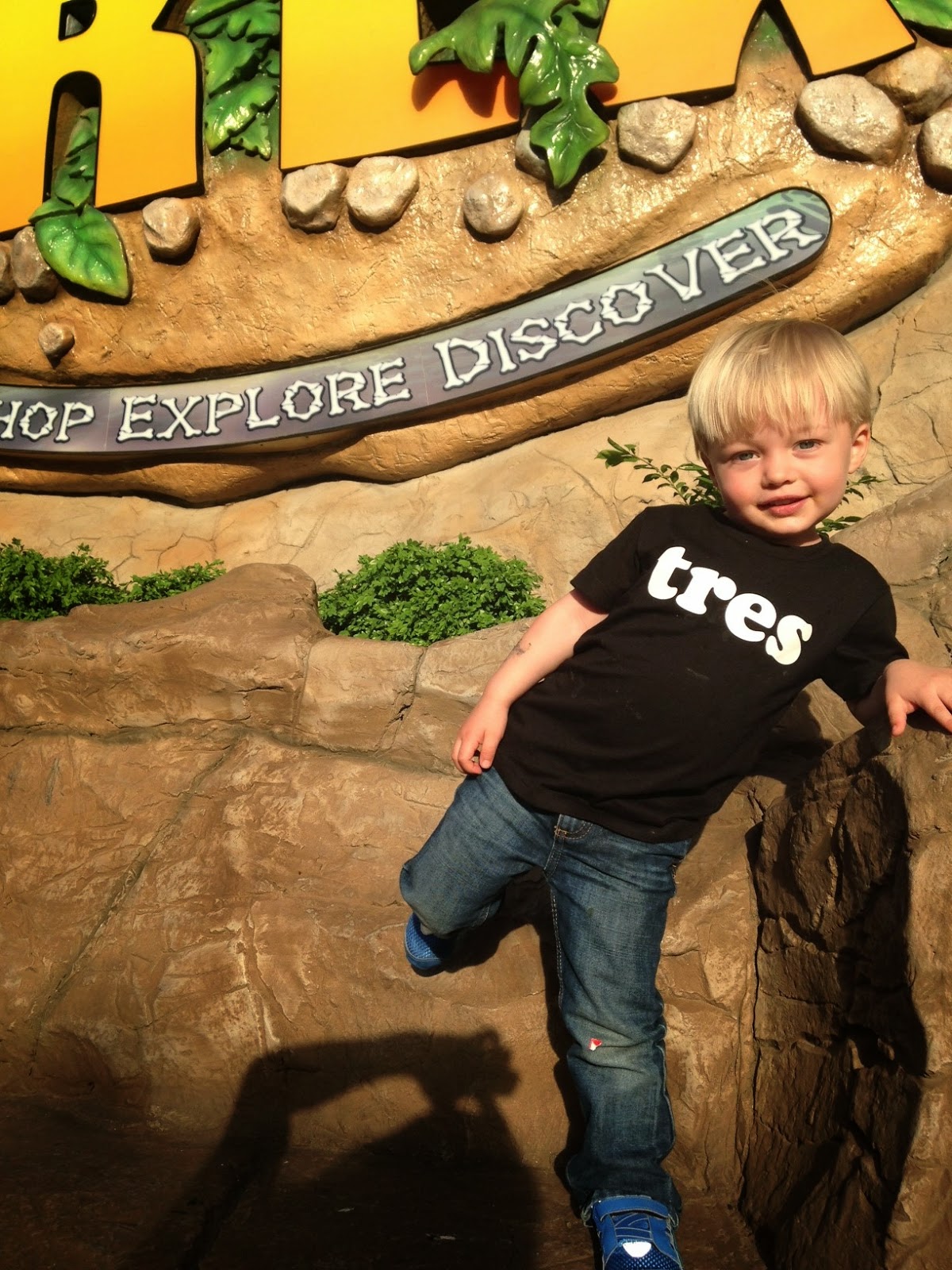 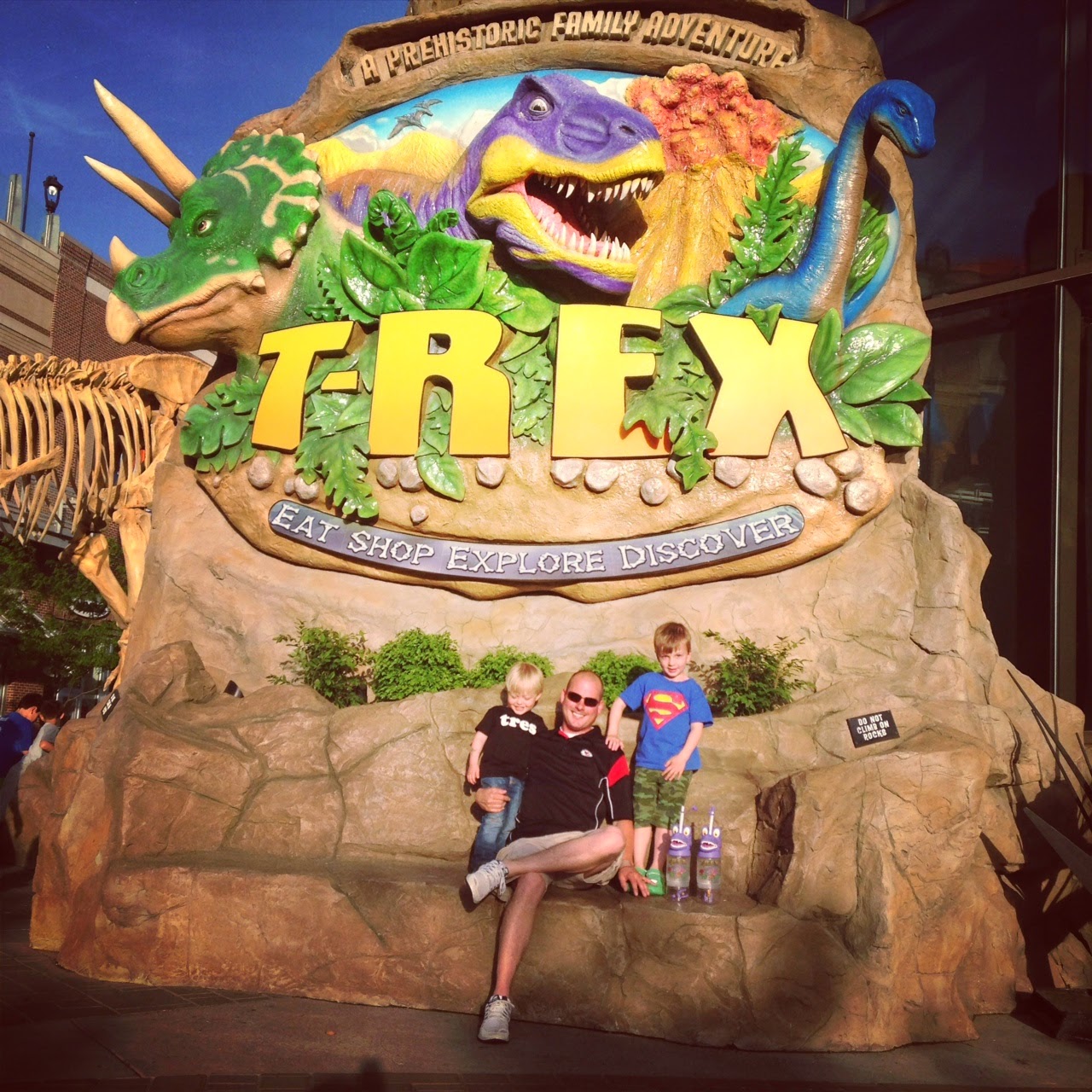 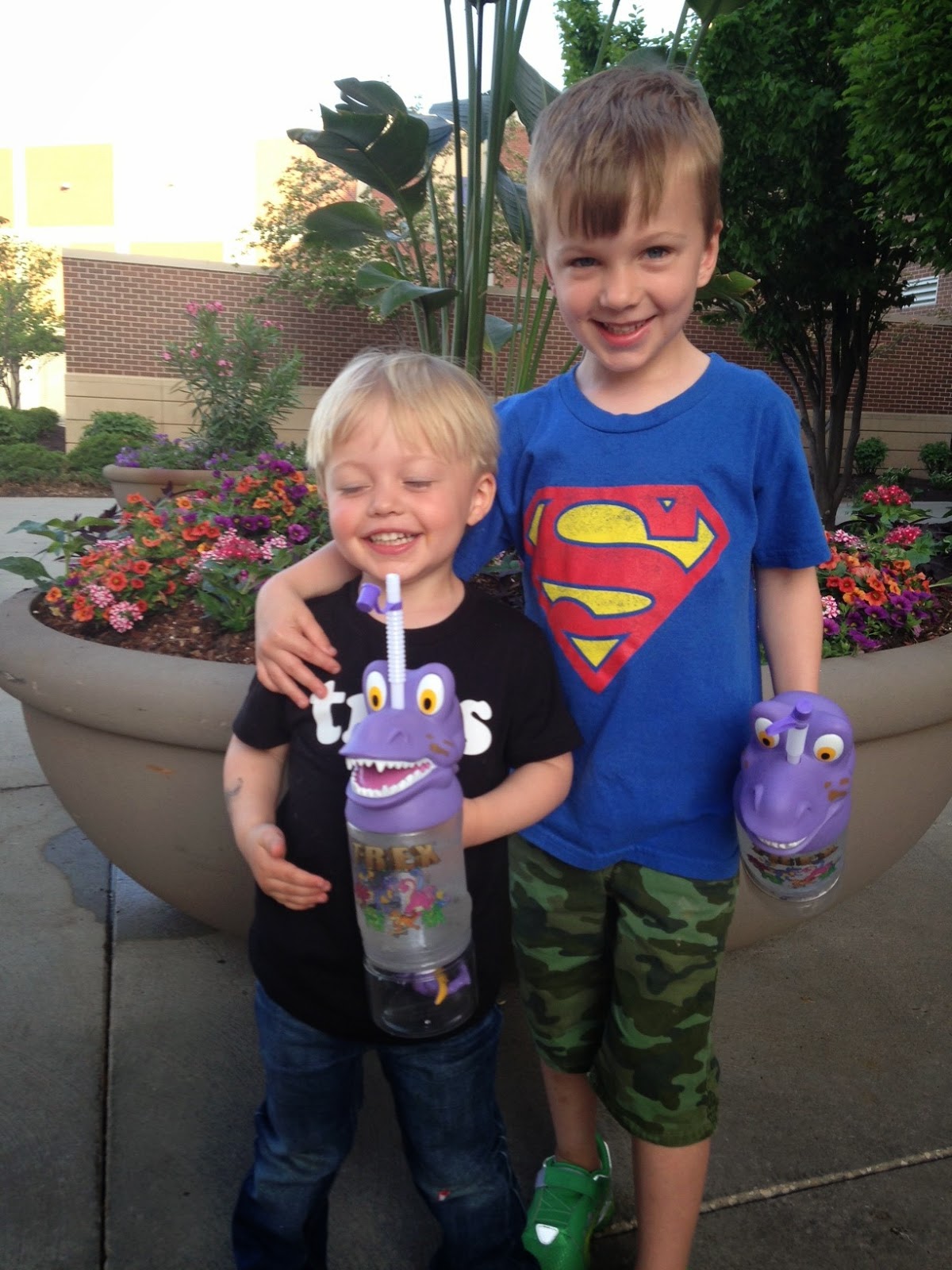 The boys were a little hesitant at first and then we reminded them that they were just pretend and couldn't get them, they slowly proceeded into the restaurant. Once we were in our seats they perked up and started looking around at all the animals. We went on a little scavenger hunt & of course had to buy them each the souvenir cup. Justin and I weren't looking forward to the food because we all know how expensive but yet terrible these sorts of restaurants can be, especially when you can't avoid the gift shop, but the kids ate better than I have ever seen them eat. They even left room for a little birthday cupcake. 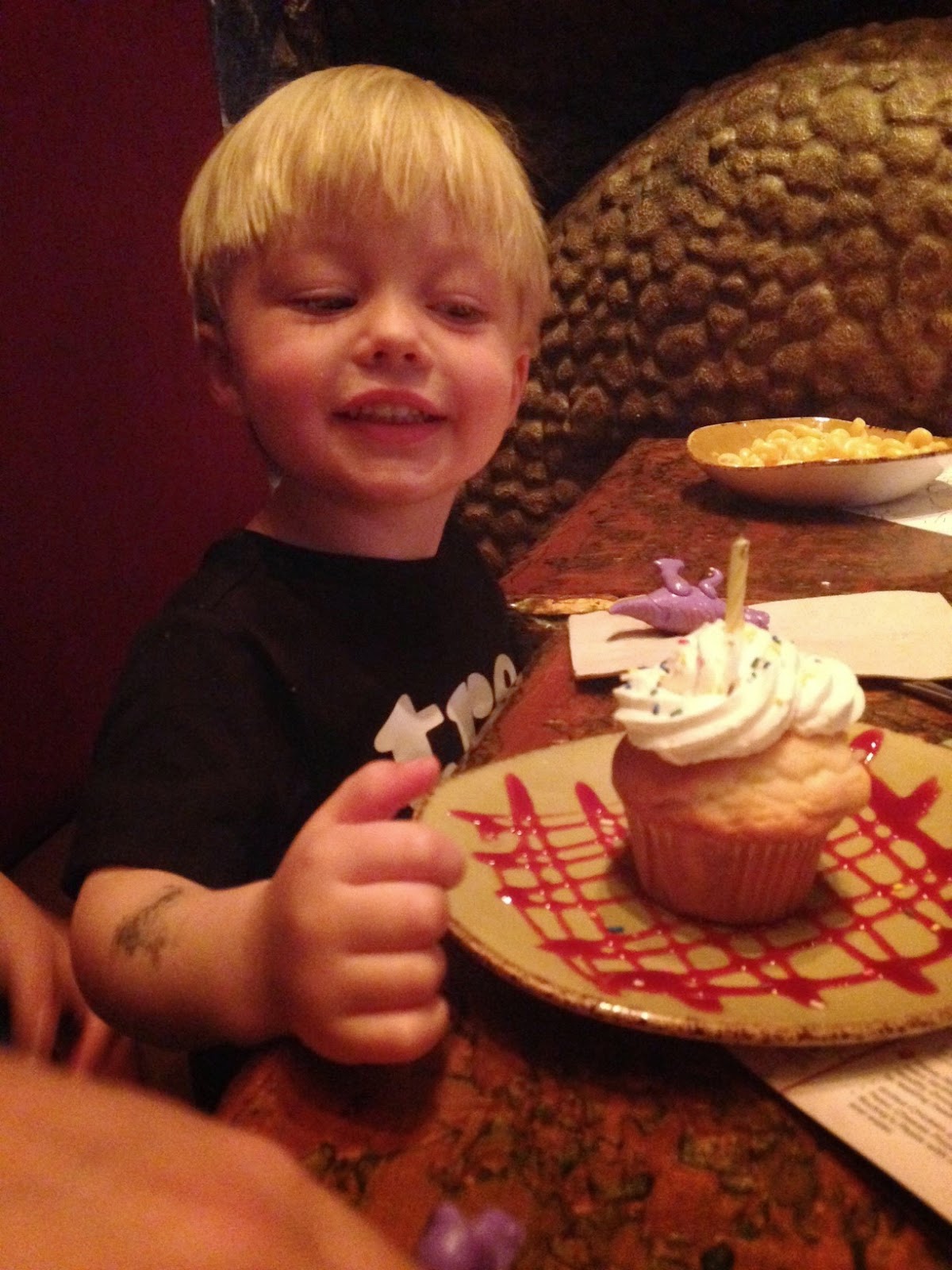 & somehow they managed to still leave room for more cake once we returned home. One of the best things about having kids this age (well there are lots of great things) is the fact that they will sing when asked which means, both you and I don't have to hear my annoying voice.


Now I should explain Logan's reaction---this was the second time someone had blown out HIS candles. The first time we sang him Happy Birthday just a few days prior at his party his Cousin Colton blew out the candles. & this time, on his REAL birthday, his brother just had to blow out the last one. His face really does say it all.

The day finally came to an end & it was no surprise that Logan was pretty much out as his head hit his pillow. What was a surprise---what he was wearing. Yes, even Batman needs rest. 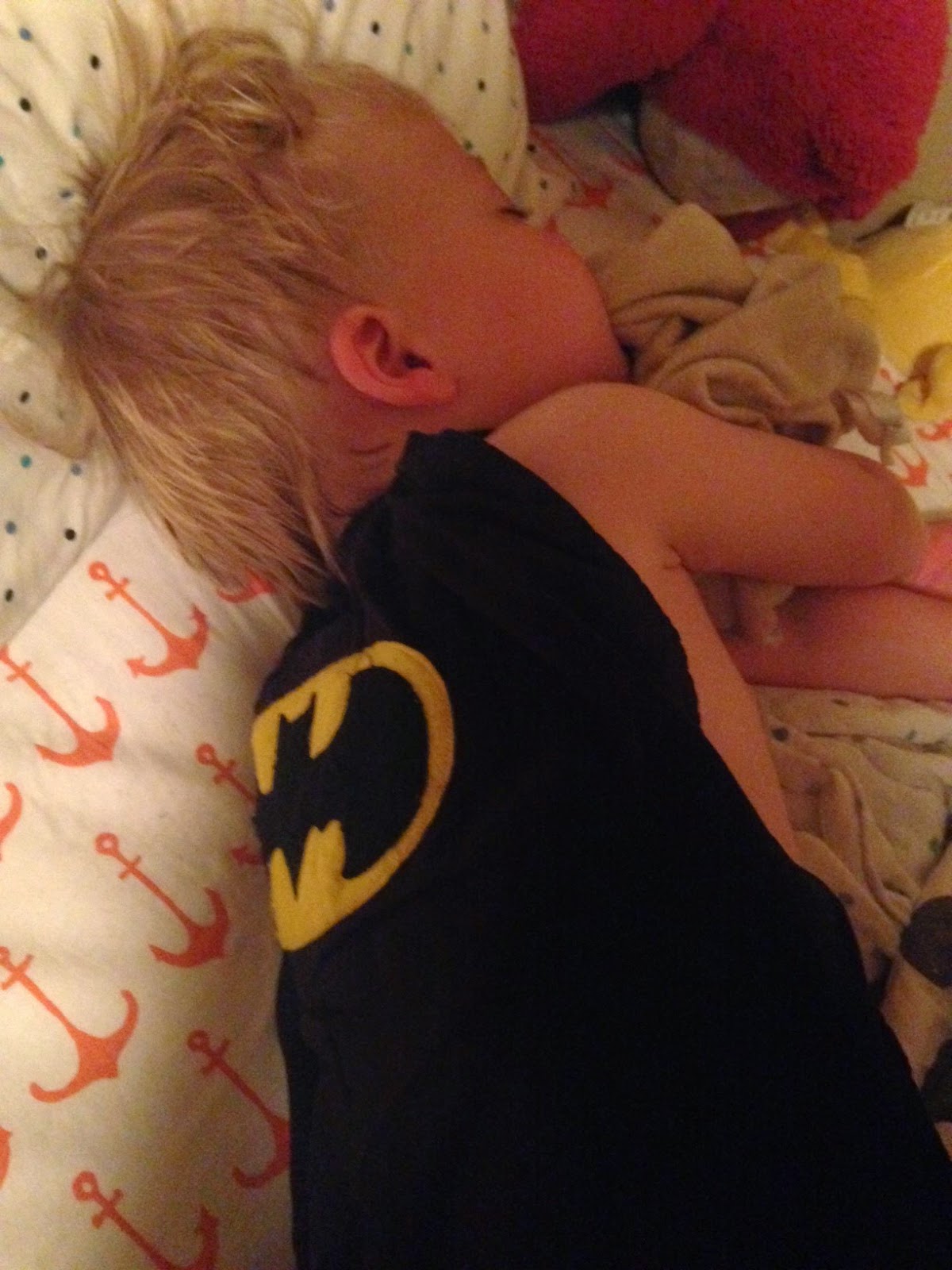 See, I told you, by far one of my favorite days of the year.