Take Me Out to the Royals.

Janet, aka. Grammy, likes to have a special birthday dinner for each of us when our birthdays roll around. In December, Adam, asked for crab legs. He got crab legs. In February, I requested chili cheese dogs (go figure, right!). When Justin's birthday rolled around, Grammy had a different idea---a day at The K & we all know how big of a fan Justin is when it comes to the Royals so he happily humored his mother. 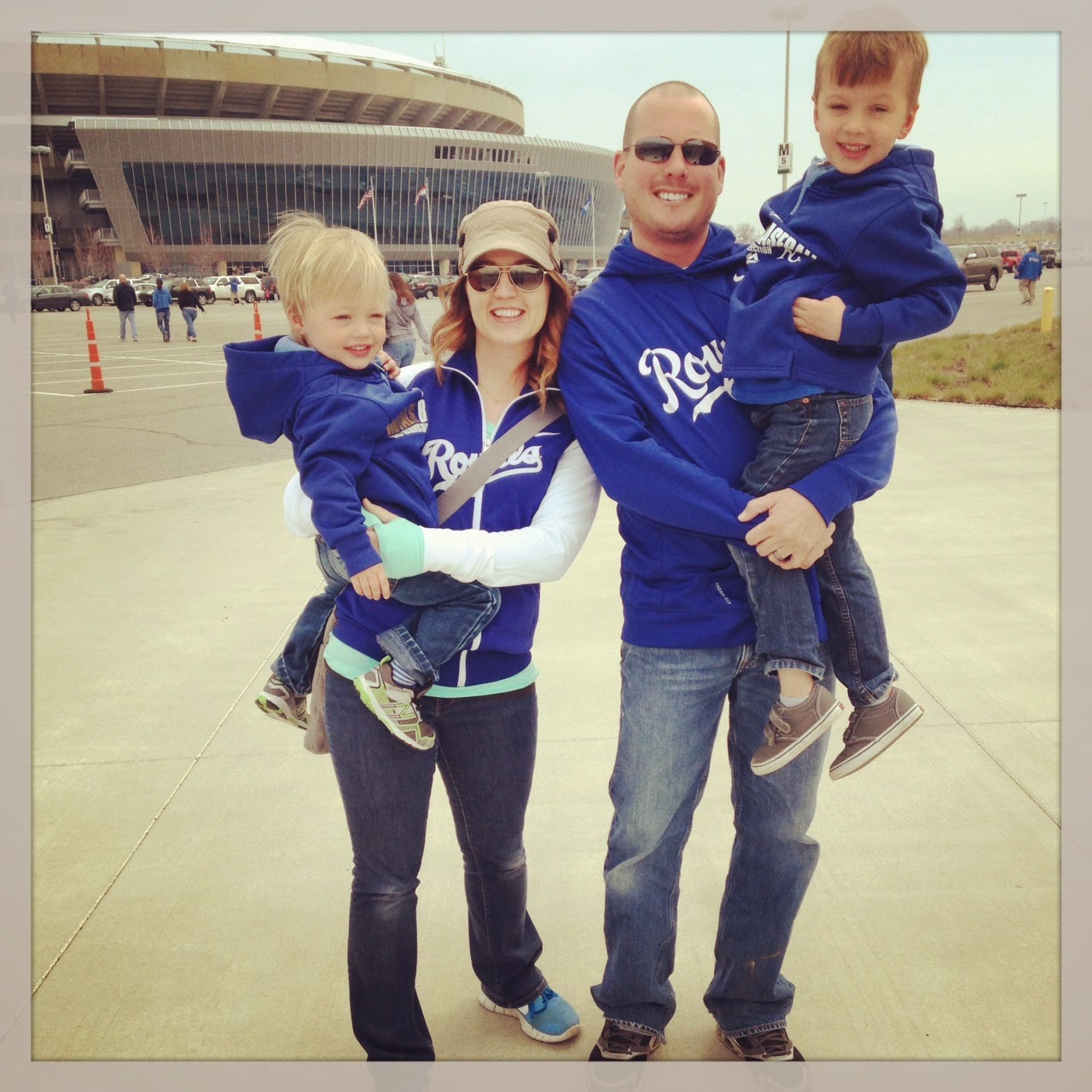 Before heading to the game we realized that our Kansas City Royals gear wasn't really going to cut it so we made a pit stop at the Kansas Sampler & loaded up--we were that family. & I was that Mom who put her boys in matching sweatshirts but lets face it, at this point it is just easier to get them the same thing than not because they will of course want what the other has and once they have it, they'll want the original back… 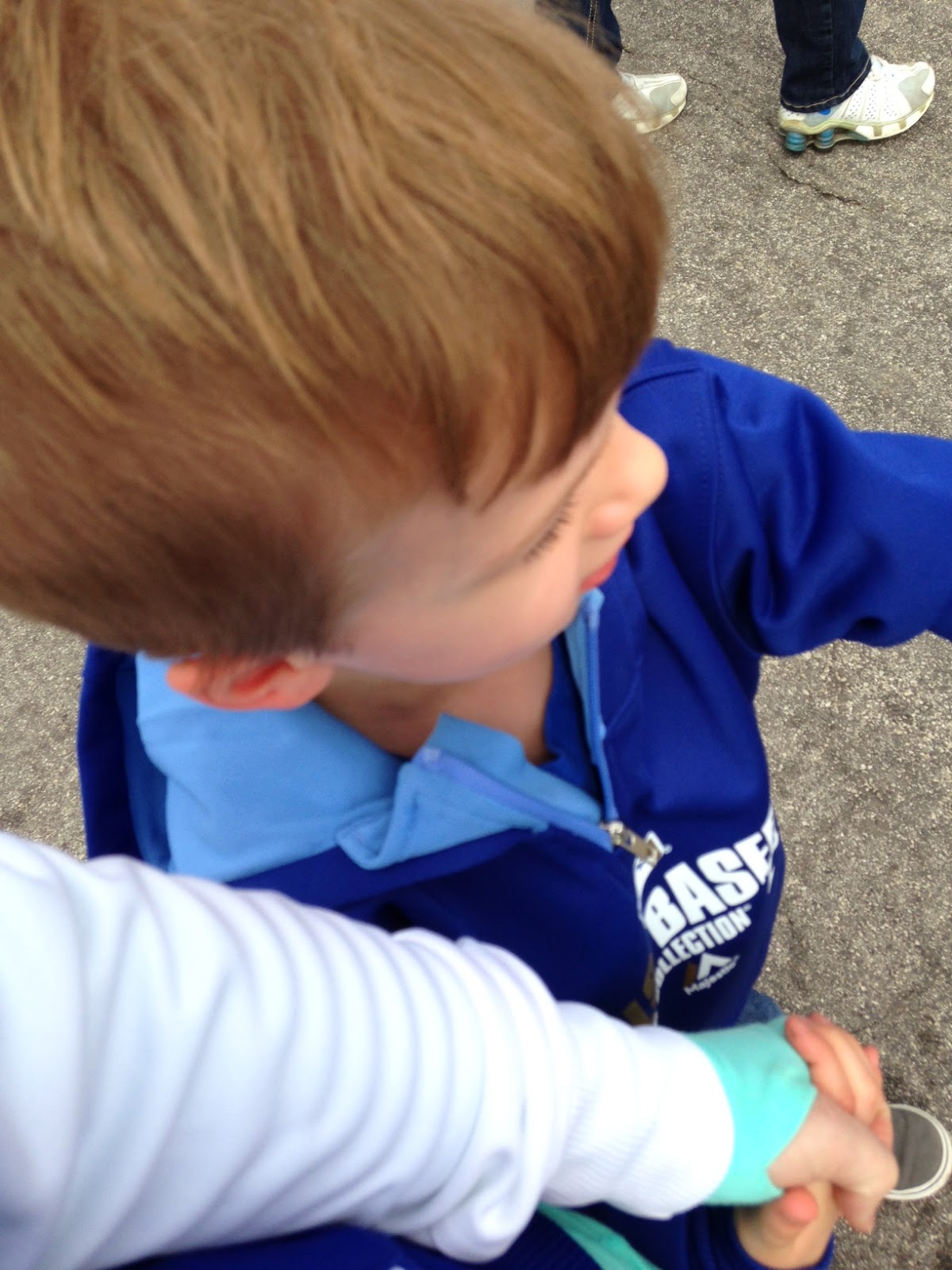 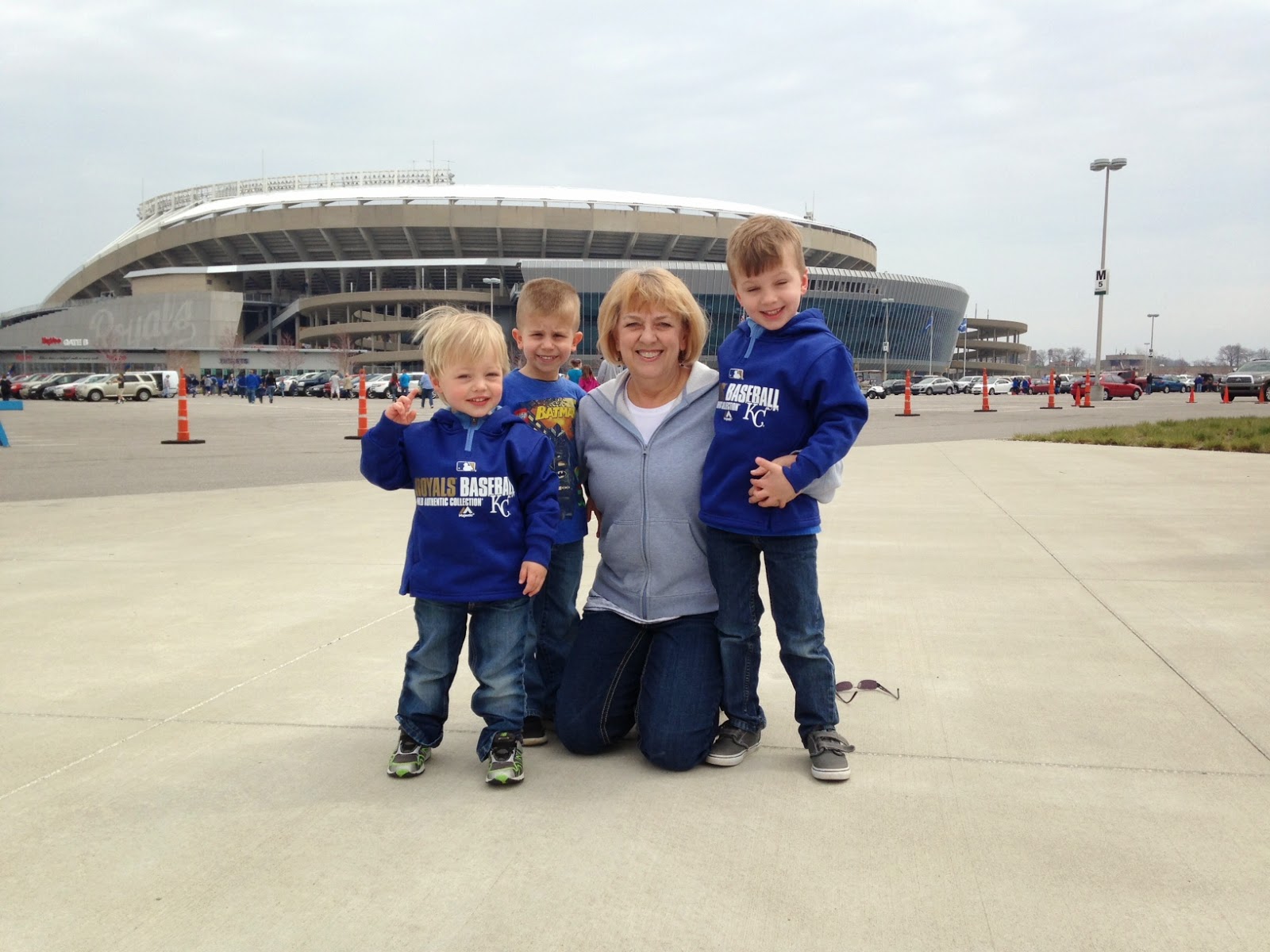 Normally Justin and I attend the home opener but this year work got in the way---damn those jobs of ours, but at least we were able to make it out for opening weekend. It was also Family Fun Day at The K which meant the kids could run the bases after the game. Now all we had to do was make it through all 9 innings with happy kids...challenge accepted! 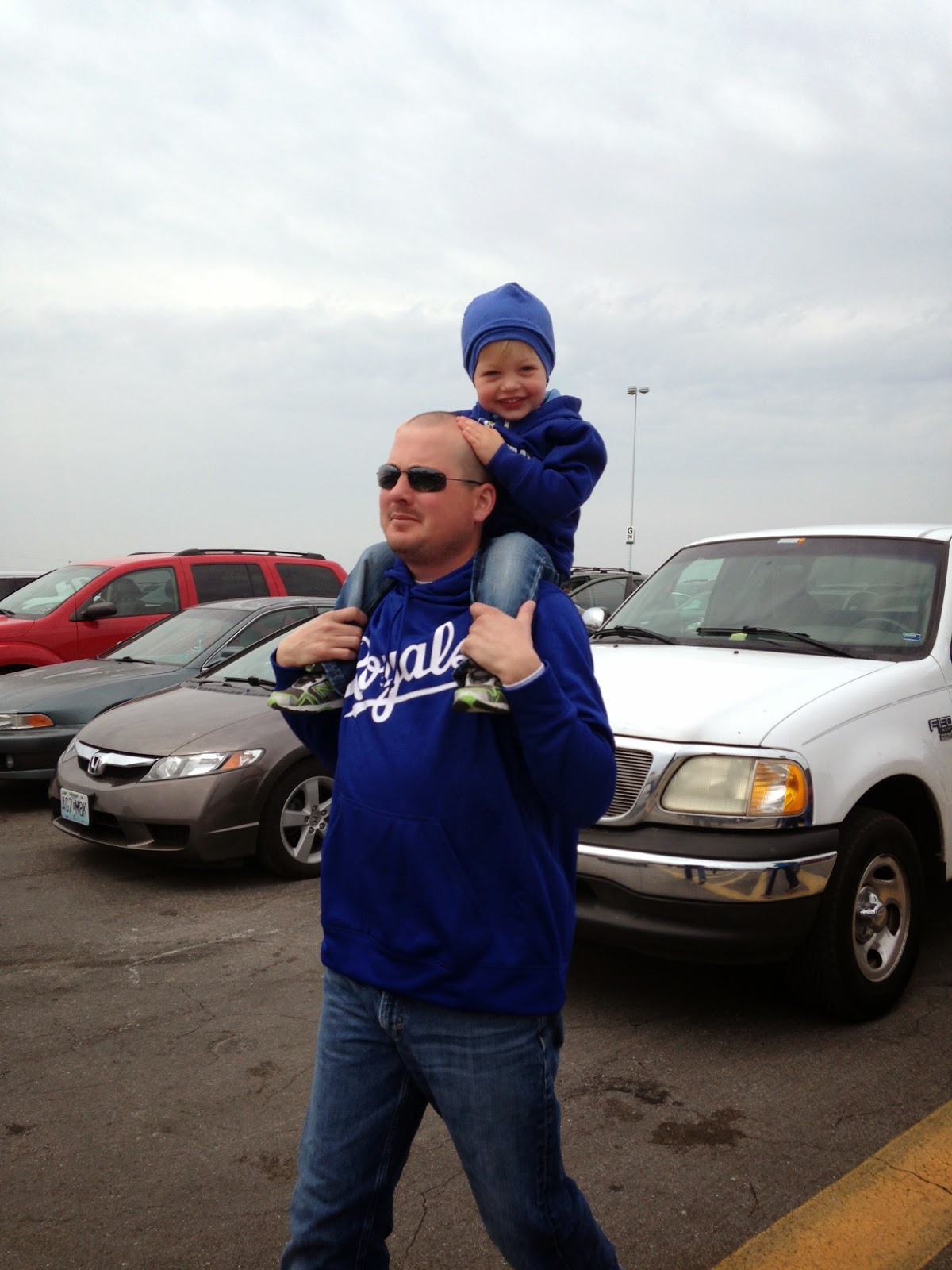 As Justin, Janet and Adam took the kids to find our seats and get settled in, Becky and I made a little detour and stopped by the Guest Services office. Knowing that it was opening weekend and Family Fun Day at The K, I knew we needed to sign the boys up for the Blue Crew 2014 kids pack or we would have to wait in a VERY LONG line when it came time to run the bases. Buying the Blue Crew pack not only gets the kids a new Royals hat, which they never took off, & a new Royals shirt, which is a little big for Logie, it also gives you a VIP pass to use for the run. Around the beginning of the 9th inning is when people start lining up for the run, if you have the VIP you get to go straight to the front, if you don't, have fun walking up the concourse to the upper deck. Now don't get me wrong, there are still a number of boys and girls that have the VIP pass but once the line started moving we were in and out in a matter of 10 minutes---so worth the $20 for the Blue Crew packet. Oh and did I mention that they will send extra tickets to the boys throughout the year for us to use as a family? It will more than pay for itself. 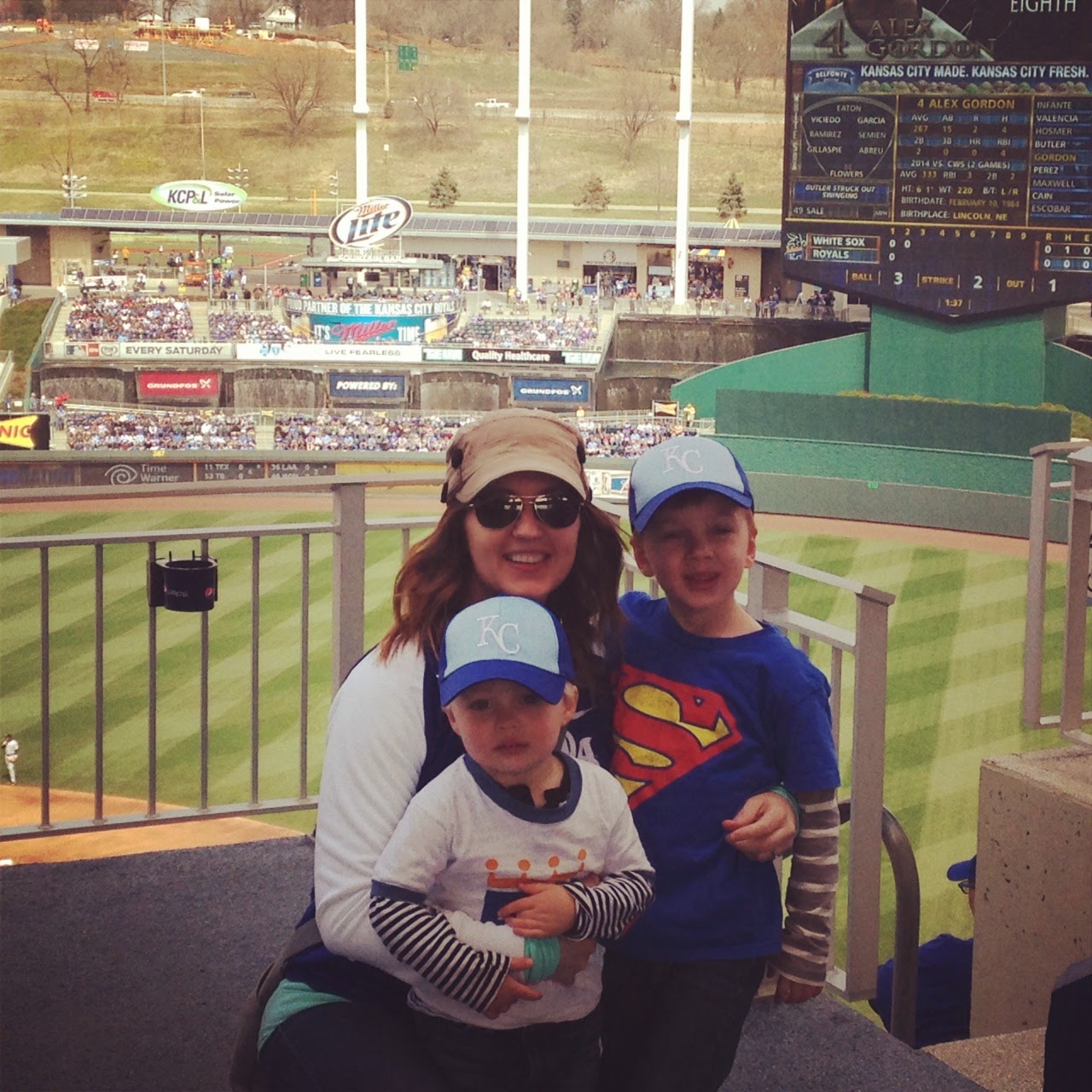 Once Becky and I arrived at our seats we were able to sit for just a few seconds before the kids started asking for lunch & off we went again, but Kaden at least kept me company in line. 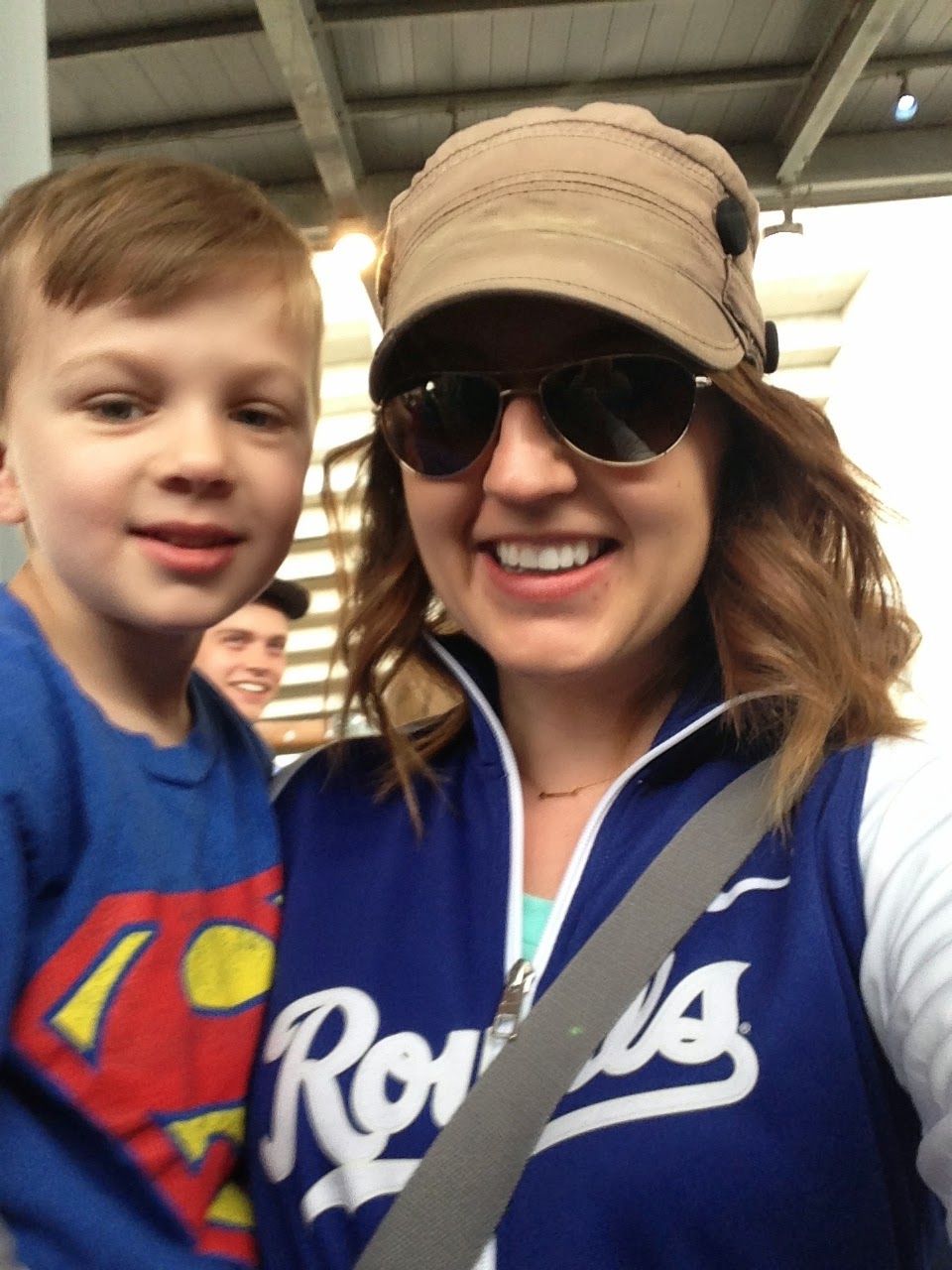 After the hot dogs were gone it was on to peanuts. Then Aunt Becky handed the boys their first Fruit by the Foot --which they have referred to as the "rolly thingy" ever since. 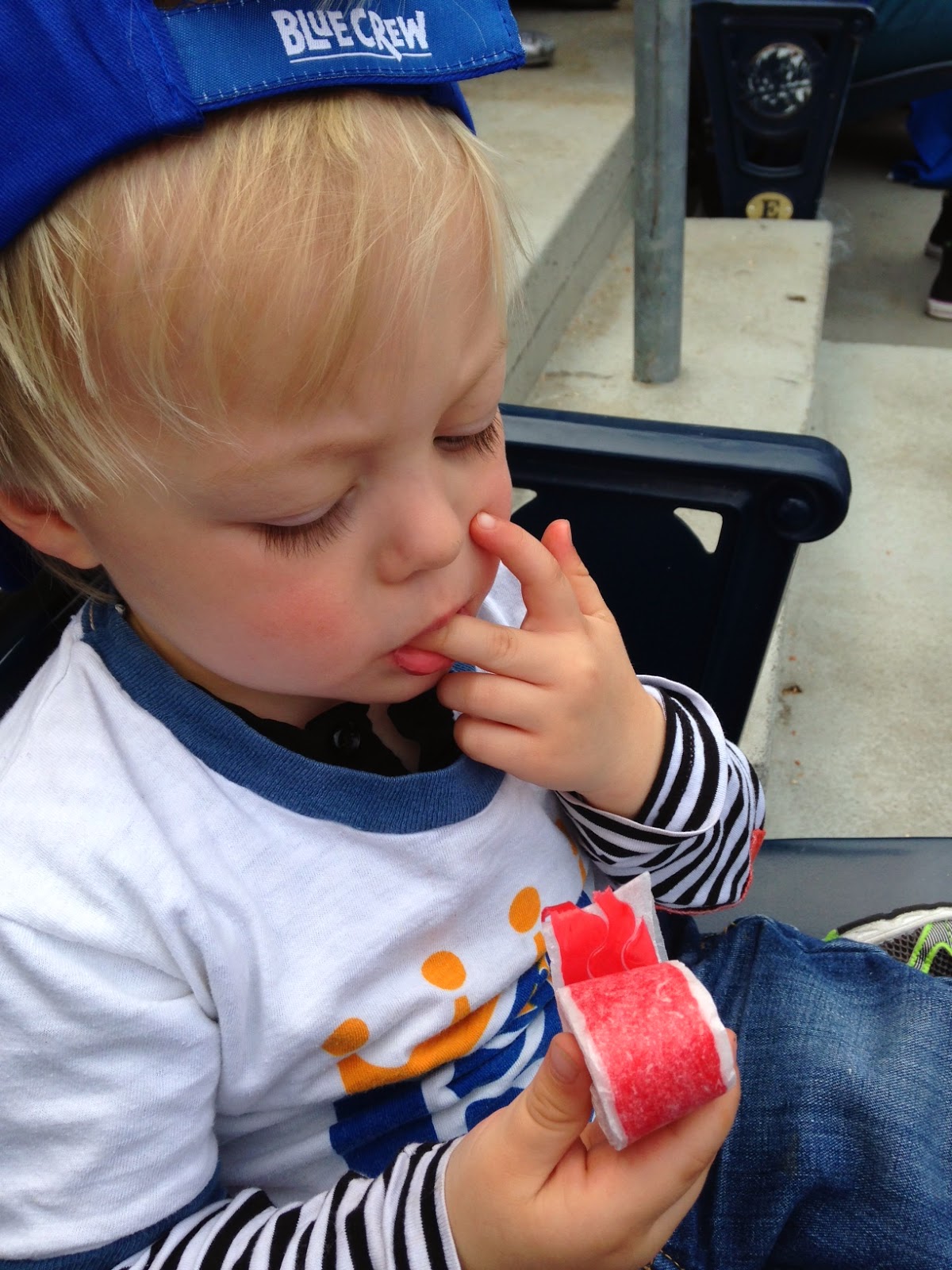 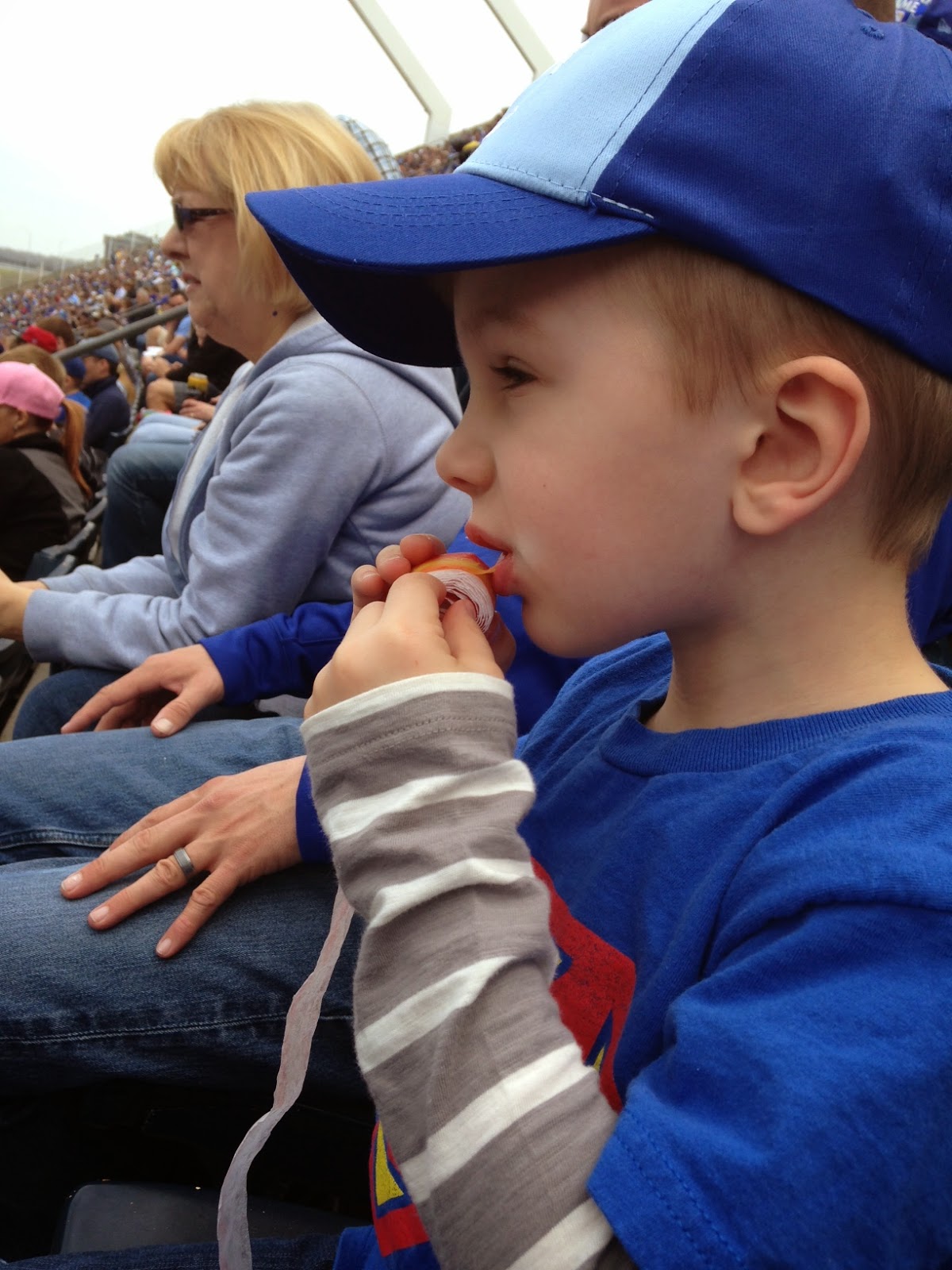 The boys were doing great--they were cheering the players on and they were dancing at each of the inning breaks. As they started to get a little bored we quickly went for the frozen lemonade--BEST $5 we ever spent. 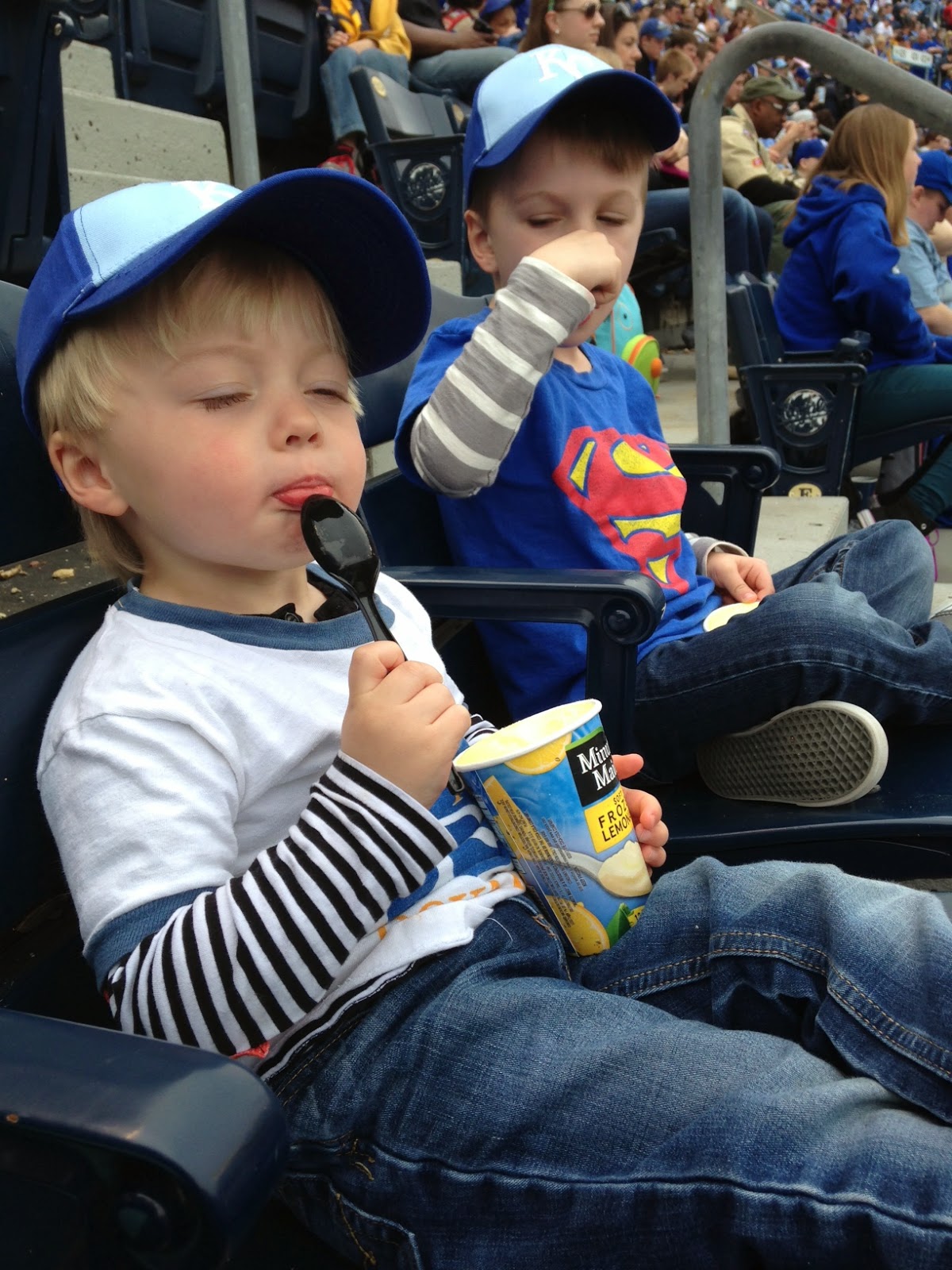 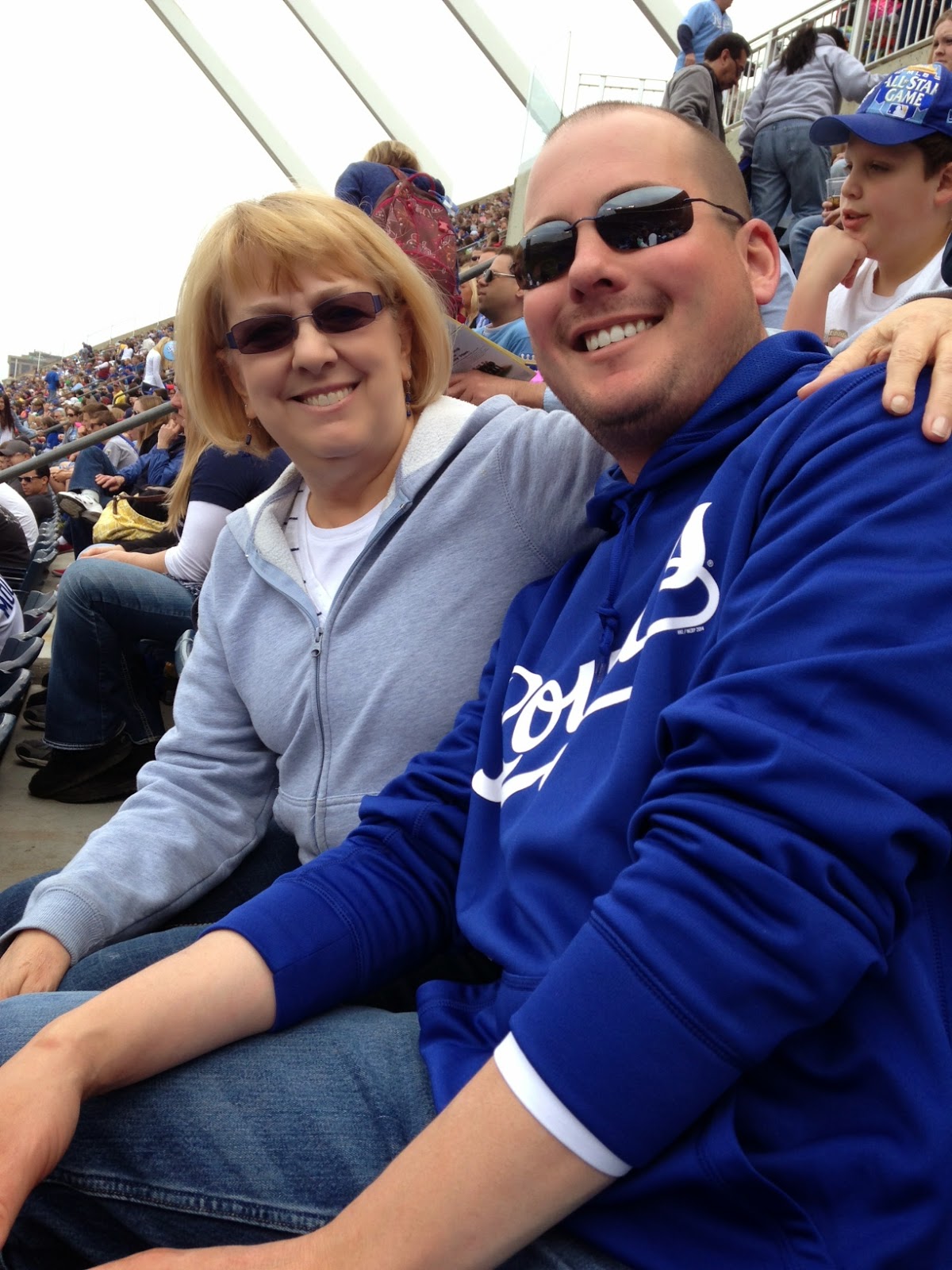 Finally it was time to line up for the bases and step out onto the field. This was only my second time doing this, the first was with my niece and nephews who were VERY little and I actually went out and ran the bases with them. As I stepped on the field this time I noticed that there were no other parents going around the bases, just the kids---do I go with them, do I let them go on their own?! I didn't have to make a decision because before I knew it, the boys had taken off for 2nd base (you start at 1st base) and around the bases they went. The each had the biggest smile on their face as they stepped across home plate but immediately it turned to a frown as they found out that they couldn't go again. Lucky for them, it was the first of many Sunday Fun Days that The K will be hosting over the next few months. 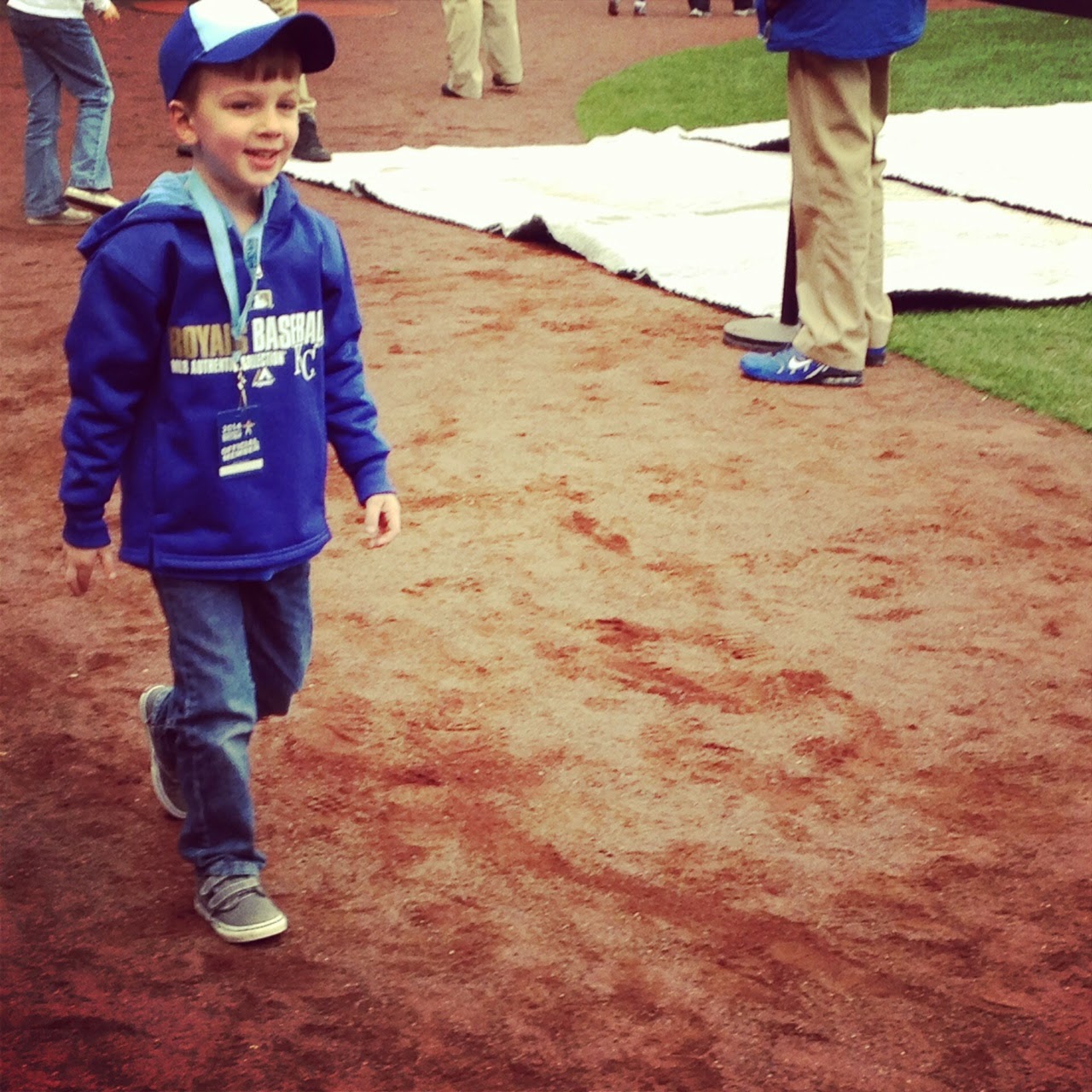 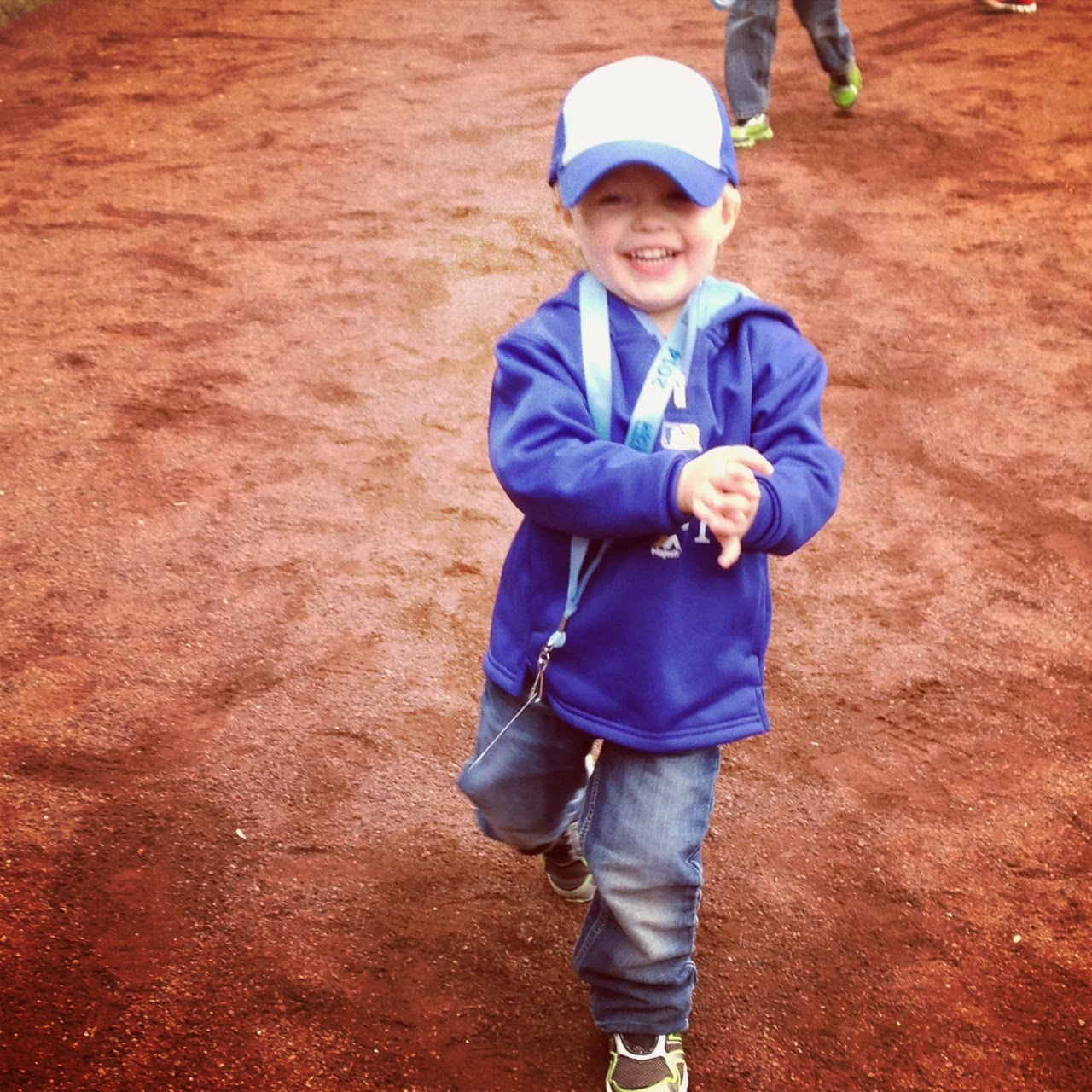 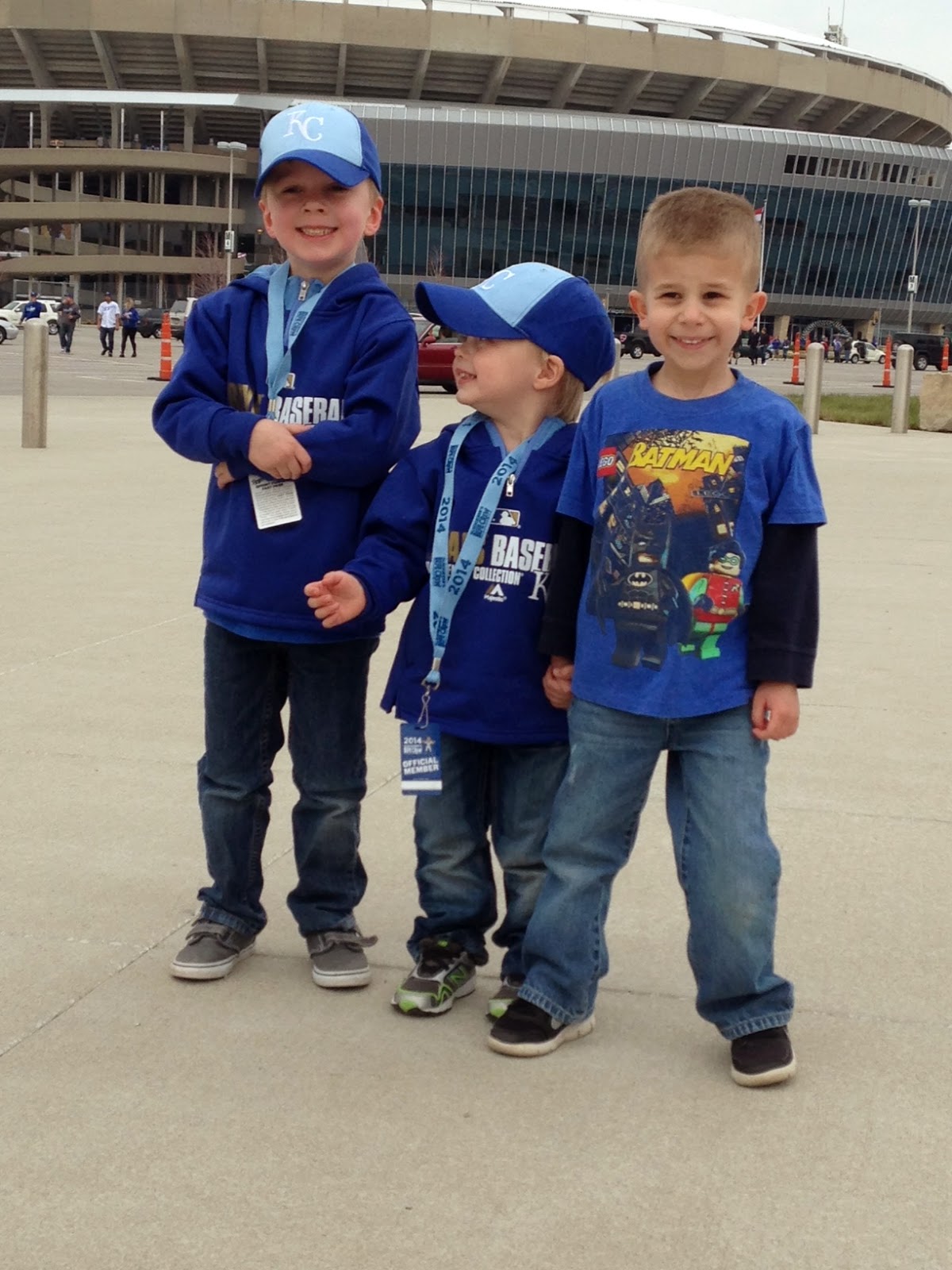 Family Fun Day at The K wasn't just on Sunday, nope we headed back out on Tuesday for a little more fun. Justin had purchased these tickets a few weeks back and we figured why not? The boys will love being able to stay up a little later, it won't be as busy and we could let the boys enjoy the Little K.

Justin whisked Kaden up on top of his shoulders and Logan just looked at me with his big blue eyes & I grabbed him and threw him up on mine---not sure I'll be able to do that much longer but then again, I am working out now so who knows my limits--I hope you are laughing! 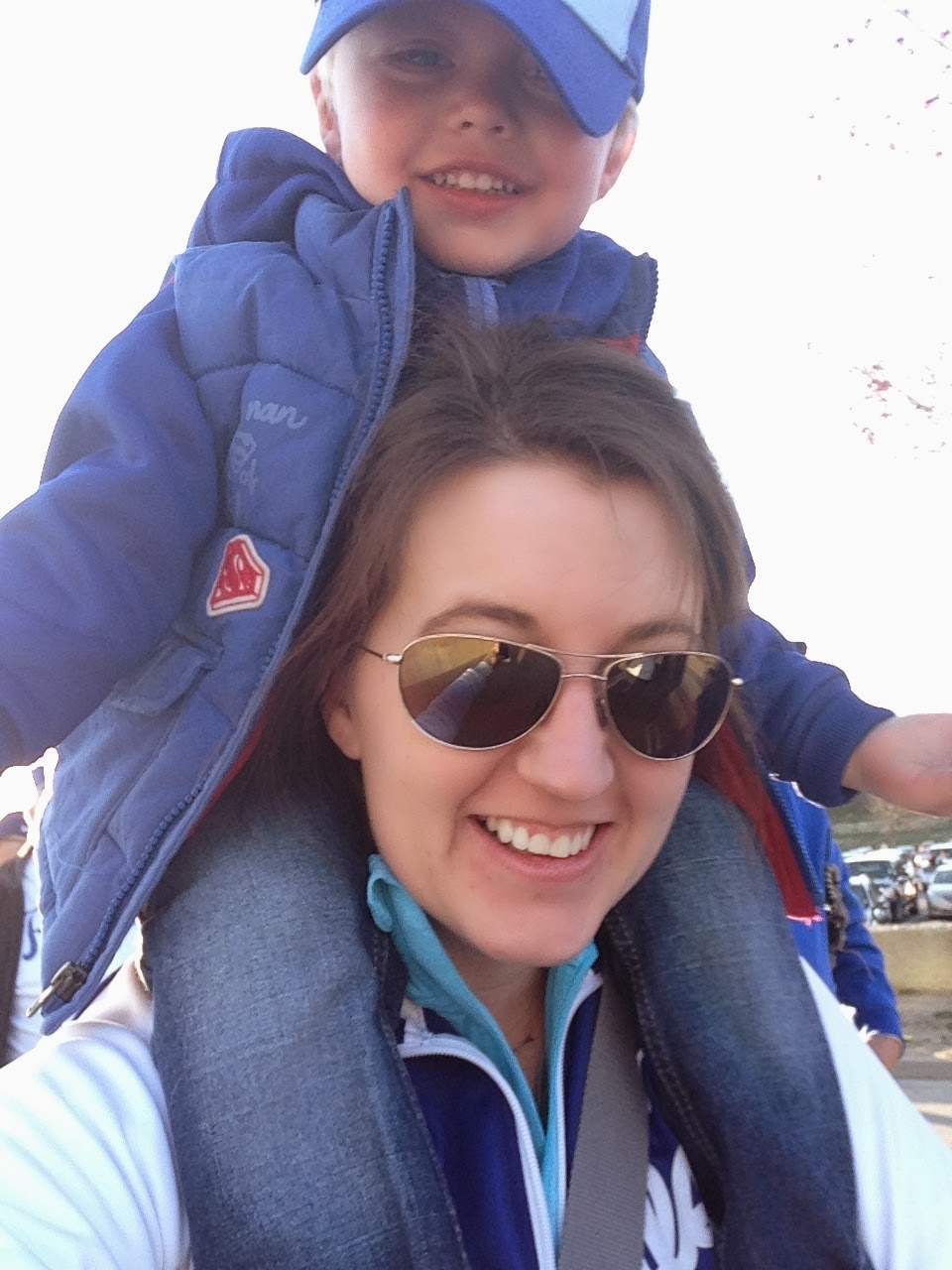 Since this was a Tuesday evening game there weren't many fans in attendance and we were able to hop right down to the front row in the outfield to capture a quick picture of the boys with Mr. Alex Gordon. Alex wasn't cooperating and listening to my directions and I ended up only getting his lower half--next time. 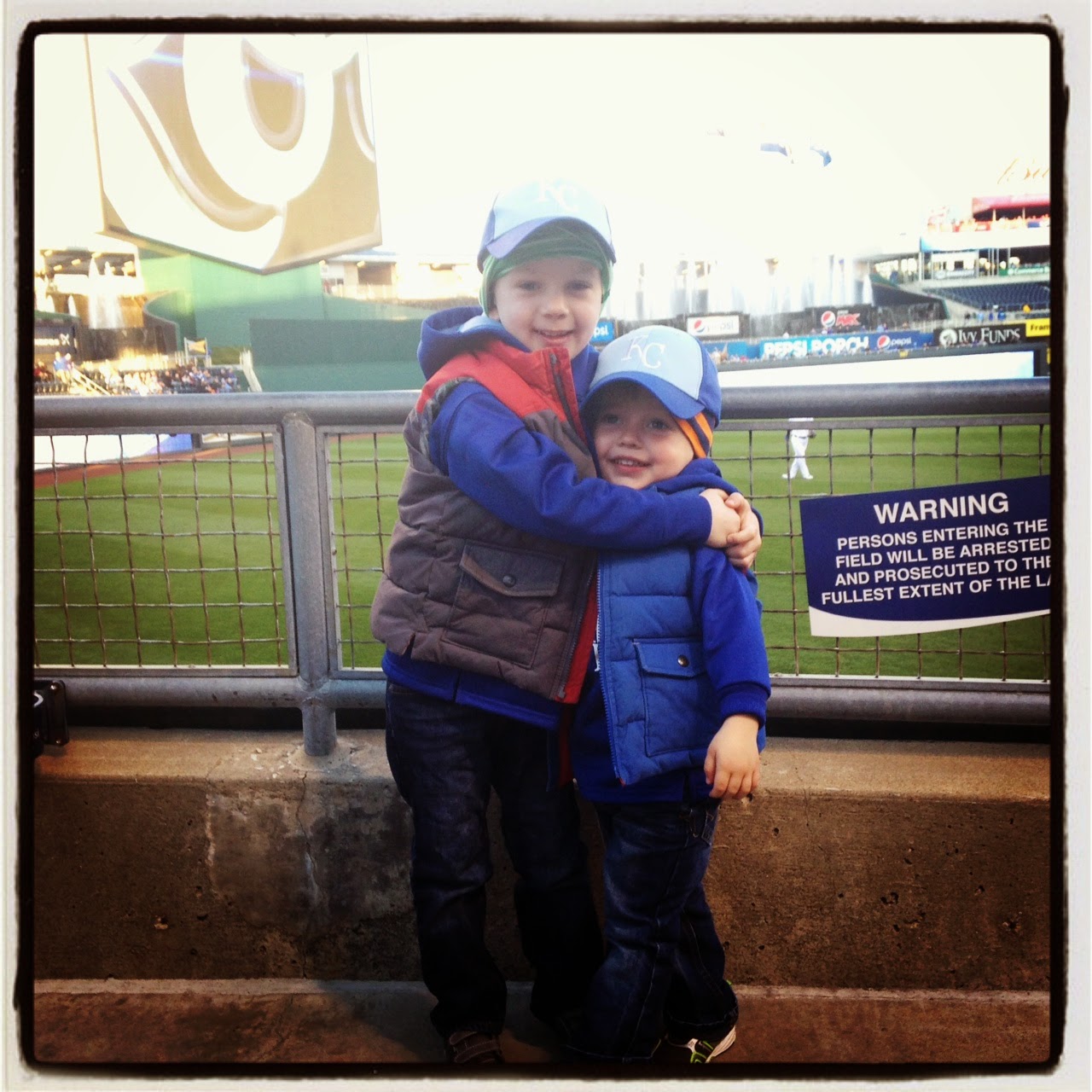 The boys tuckered out a little quicker than on Sunday Fun Day but lucky for them Slugger made it out to The Little K during the 4th inning and we were first in line. Logan ran right up to him, Kaden was a little more skittish but he sure loved how his tail hung there in mid air. 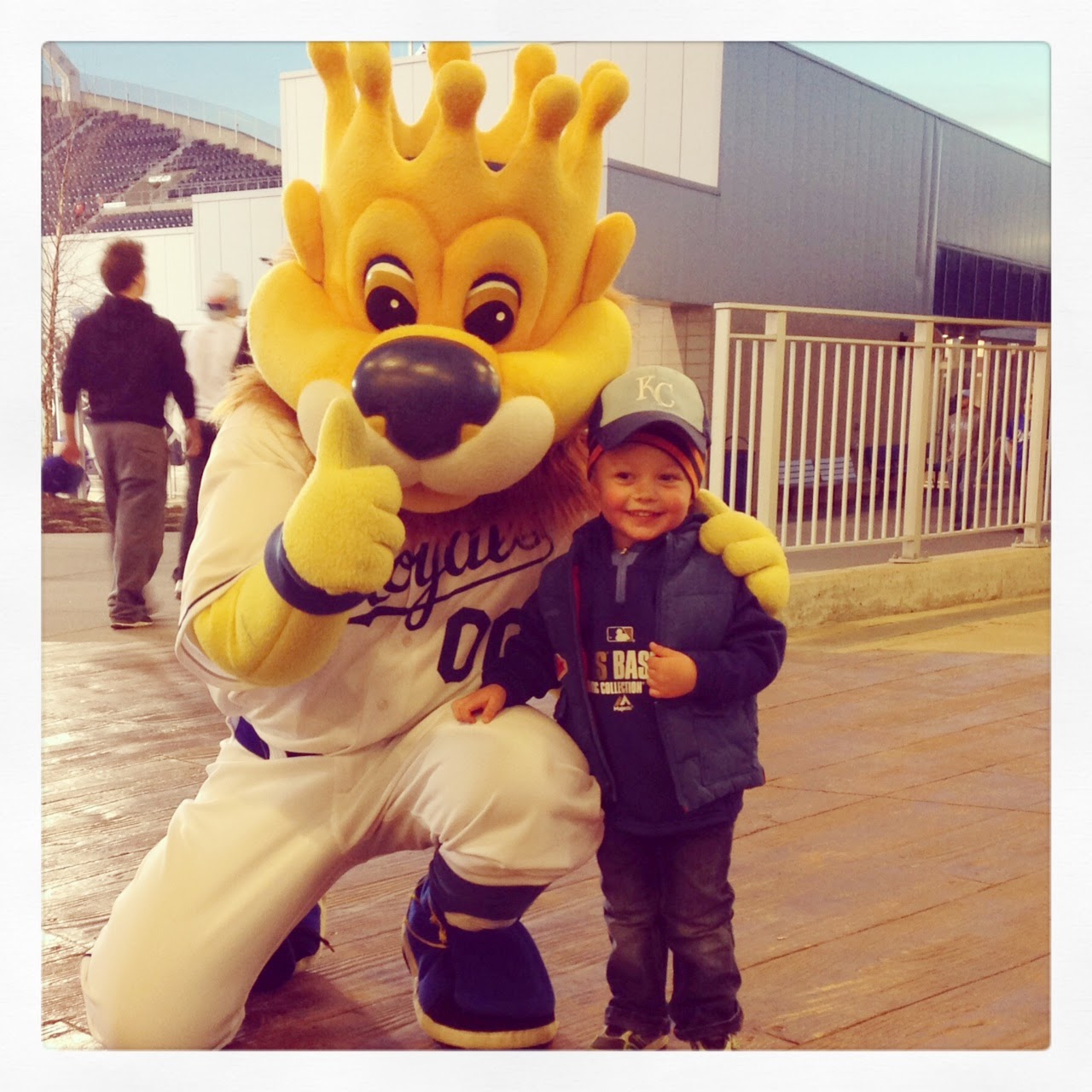 I can already tell these boys are going to be as big of Royals fans as their daddy is & its going to be one great summer.