Its soccer season. We are four weeks in and Kaden has only got to play once, the team has only played twice. First week was a bye week but the kids had pictures & Kaden certainly looks the part…

But lets back up a little first. When we asked Kaden a few months back what sports he wanted to play he said soccer and baseball. Soccer was first up so we went ahead and got him signed up & a few weeks prior to it starting we headed out to get his soccer gear. We needed to pick up shoes, shin guards, socks, and a ball. As we were picking out Kaden's gear Logan started talking about his shoes, his shin guards, and carrying a ball around. We weren't getting out of there without two of EVERYTHING. 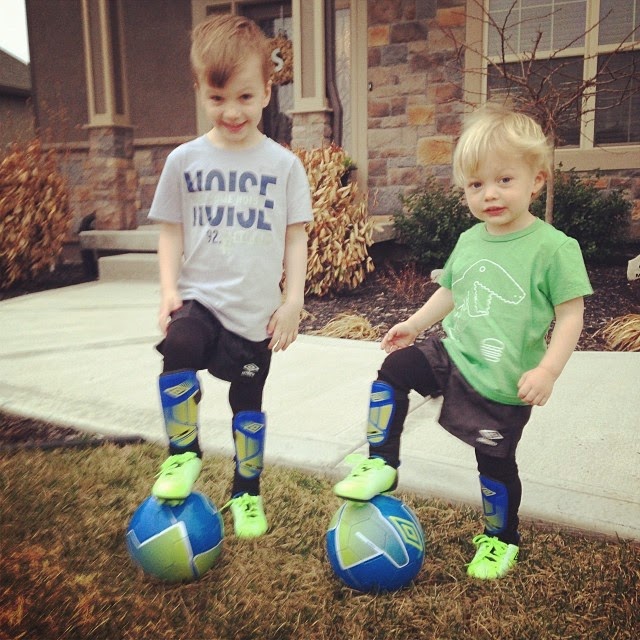 And after I posted this adorable picture of the two boys in their gear, it was pointed out to me that the shin guards go on the inside of the socks. Oops. That goes to show you how much I know about soccer, never played a day in my life. We got it right before pictures and his first game though.

Kaden's team played the weekend that we were in San Fran and were actually suppose to play on both Saturday and Sunday but it got rained out on Sunday and luckily was rescheduled for a later date which we will make--and we are hoping goes a little differently then our first time on the field. 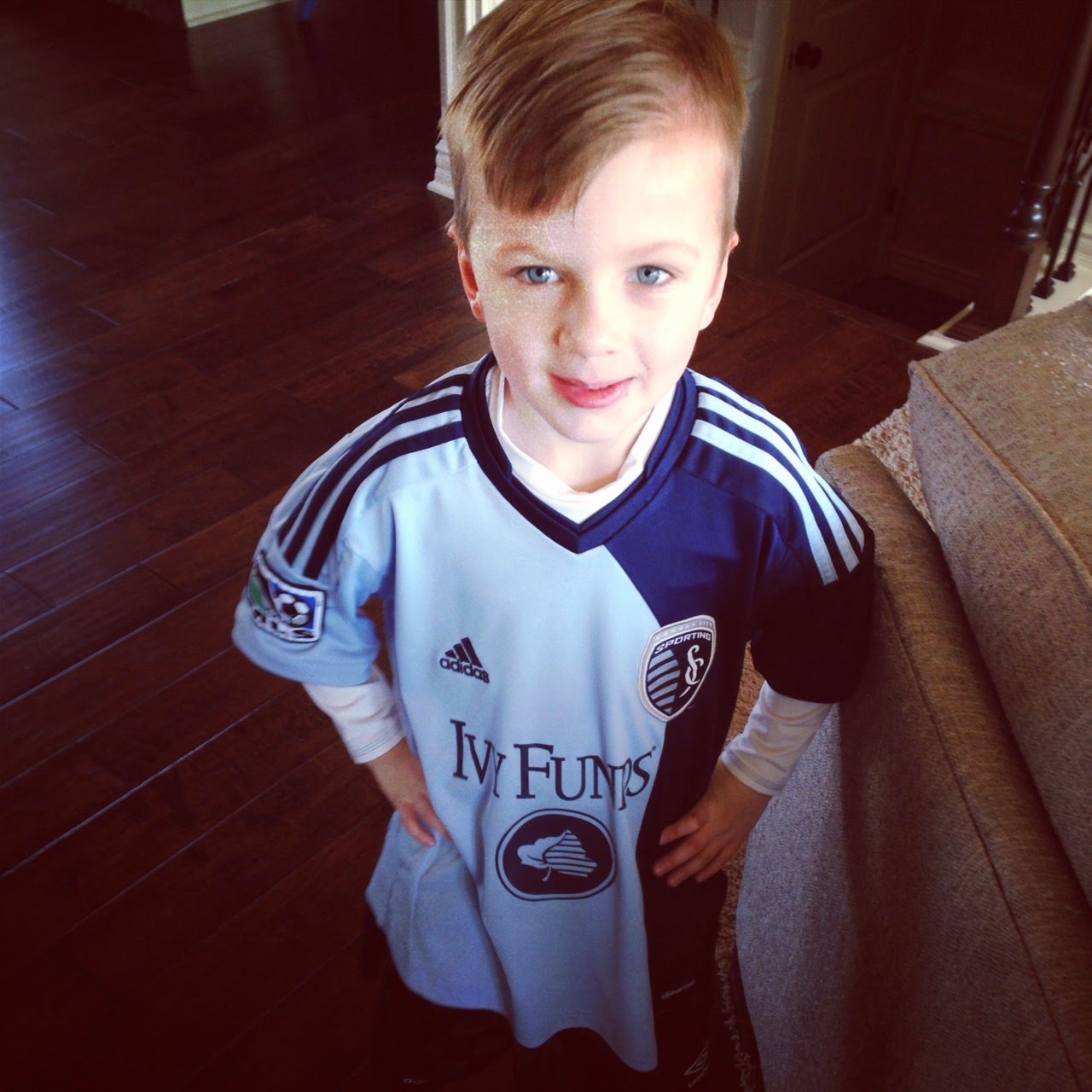 It wasn't all bad. But it was a roller coaster. We all know that Justin and I refer to Kaden as light switch--in, the MOST lovable way possible. When he is on, he is the most sweetest, lovable, happy-go-lucky kid on Earth. When he is off, he is a bear. He is sensitive. He's allowed to have his bad days, I know I do.

So on this gorgeous Saturday morning we headed out to the soccer fields. We found his team & off he went. The first 30 minutes is spent practicing with your team. The second 30 minutes they play a little game, 4 on 4 with another team.

The first 30 minutes, practice time, went AMAZING. I seriously couldn't have been more proud. He was listening to both of his coaches. He was dribbling (that's a soccer term not just a basketball term, right?) the ball from mid field towards the goal and then kicking it into goal scoring. He had one of the stronger kicks. He was actually one of the more controlled dribblers & he was the biggest kid on his team. At this point, I just knew things were going to continue to be smooth. He was going to LOVE this. Logan sat there in awe… 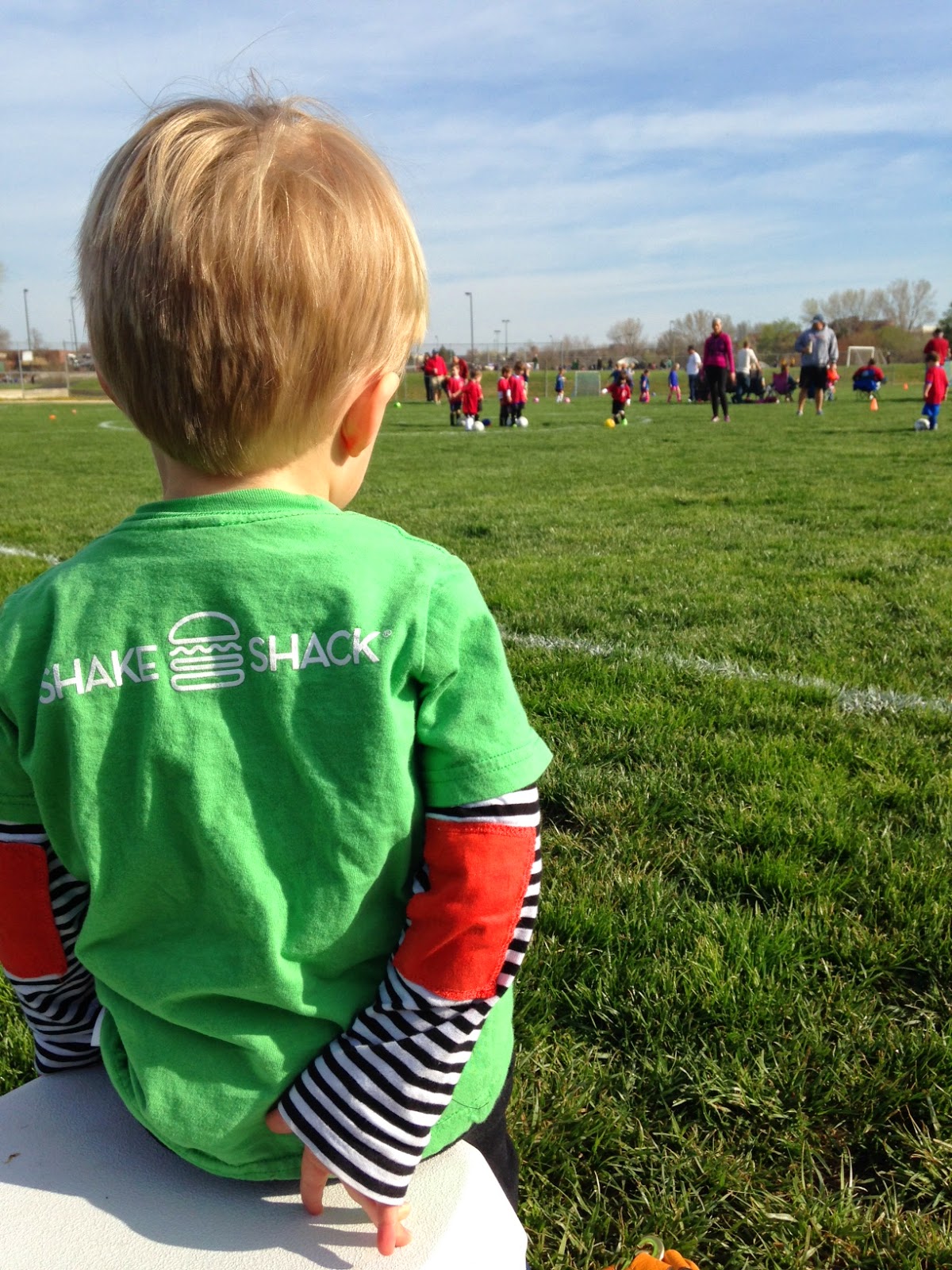 and then he had to go to the bathroom. I lost Rock, Paper, Scissors and had to make the walk to the restrooms---it was a long haul & I don't plan on losing again. As we were walking back up I noticed Kaden was over by Justin and he was down on his knees talking to him. At first I was thinking that he had accidentally hurt someone or someone had accidentally hurt him. As I got closer, I realized he didn't want to play anymore. Practice was over and the game was getting ready to start. He got a little break and when he came over to Justin and I wasn't there, he got upset. It was going to be an uphill battle from there.

He wanted his lovies. He wanted to go home. He didn't want to play anymore. I tried calming him down but he just continued to work himself up. Finally I was able to get him to come over and sit with his team as I sat there with him. We cheered on the Comets & a smile was slowing showing up on his face. I took this as my opportunity to see if he was ready to go in. He wasn't. I explained that it didn't matter how well he did or even if he kicked the ball. All I wanted him to do was to go out there and have fun. To try his hardest. That I would be proud of him no matter what BUT if he wasn't ready, that was okay too. We would sit on the side line and cheer on his teammates. A few more minutes passed by and he got a little more closer to the coach. I took another shot & this time I promised him gum. FIVE pieces of gum and he could pick them out himself at the store. He perked up at this & was ready for his shot. (I would have given him anything at this point, I just wanted him to try).

He went in. He did great. He ran after the ball and even kicked it a couple times breaking free and took a shot but it went off the side of the goal. He was out there for a whole 45 seconds and the whistle blew for halftime. & we started over again. This time it didn't take as long to get him to go back in. He went in, asked for directions from Coach & then off he went. A few seconds later he was on the ground, he had gotten knocked down. He looked up towards us to see our reactions and we were both saying, "You're fine. Dust it off." and he broke down. Justin went out to get him. He sat there with us and not 5 minutes later the game was over. He did go and shake hands with the other team as our team's parents made a tunnel for the boys to run through--he sure LOVED that part.

On the way home we talked about the game. He gave the highlights (and lowlights), he talked about how he kicked the ball twice and how he was knocked down and cried. He says he wants to go back, I just hope he wants to play. Justin and I explained to him again that all we want is for him to have fun and try his hardest. That we wouldn't be quitting soccer because we don't make a commitment and not follow through. That if he didn't want to play, that was okay too but we would be sitting on the sidelines with his coach and cheering his friends on.

I'll be honest, that morning was probably tougher on Justin and I than him. He bounces back quickly but not me. I questioned signing him up for something at 4. I questioned his toughness. I questioned our parenting and if we were saying the right things to him, to encourage him, to let him know we were proud of him and that we were there to support him. I thought back to my childhood, even called my mom to ask about me playing sports when I was his age. I didn't. She didn't think I started sports until I was around 6 and that was t-ball. I was the middle child so I watched my sister play sports. I watched my dad and mom play too so when it came time, I just went out there and did it. Sports were such a huge part of my childhood--softball, volleyball, basketball. I was athletic. I LOVED playing. What if my son doesn't? Or if he does, what if he doesn't want his Mom to be his coach?

And then I remembered, he is four. FOUR. He'll find his way, whatever that may be and the only thing he needs to know now, is that we are proud of him and that all we want is for him to have fun and try his best. He doesn't have to be the best, he just has do give his best.