Our Easter weekend celebration was a little bit different than last year. Last year we hosted brunch out our house and had most of my family in town and Justin's family joined too. It was a great Easter celebration--full of family & kids running around laughing while hunting eggs.

This year was a little different--my family wasn't able to come into town & we had been gone the weekend before and I was headed out for a weekend conference the weekend following (this weekend) & didn't really want to be gone for another weekend so we stayed home. We decided to attend Easter Service on Friday evening, Good Friday--and invited Aunt Becky and Cousin Colton to go with us. The boys were nice enough to pose for a picture after Easter service & I think we can all agree that all three of them are as cute as can be… 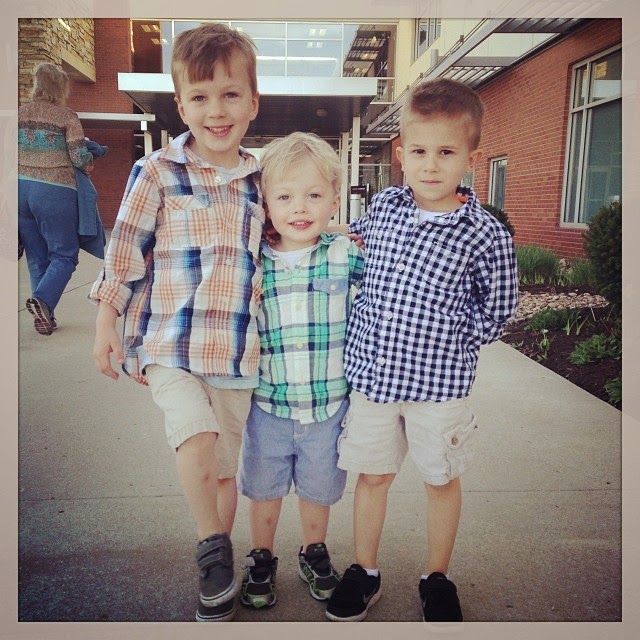 And look at those legs on my boys. If Kaden had both legs down on the ground you could see that both he and Logan have bruises in the exact same spot on their legs. These two are in to wrestling with each other and karate---we don't allow it when we see but we don't always see them "pretending" to do karate.

Easter service was amazing. The boys came from their classes with megaphones and yelling "JESUS IS ALIVE" & there hasn't been a morning drive into work that has gone by that they haven't reminded me of that little fact. I love that they are learning about Jesus & his sacrifice HE made for us. Justin and I are learning too, we just finished a three part serious entitled Is God out to get me? and  the last of the three was that God is out to Raise me, that he wants to make all things new. That just knowing Jesus is Lord isn't enough, you have believe it in your heart. I'll be the first to admit, I haven't been a consistent church goer for a very long time--I was of the mindset that I knew who God was. I knew what he stood for and I believed in him. That was enough for me. God and I had an understanding. Then I had kids & wanted something more for them & I didn't know enough to be the one to show them the way so we chose to try out a church that a co-worker had been telling me about for over a year. We started attending in January and unless we have been out of town, we haven't missed a week. I can't explain how much this change has meant to me, to our family. There seems to be this weight off my shoulders, all those worries are gone & there is more peace in my life. Its been good. Real good.

We finished the evening up with a little dinner out & then it was sleepover time for the boys. All week long they had talked about sleeping with one another. Mommy, you tell me when I can go to Kaden's room. was all I would hear each night I would put Logan to bed. I would swipe his hair back, kiss him on the cheek and tell him that Friday was just days away. They can't get enough of each other and are inseparable at this age. I, for one, can't get enough of it. 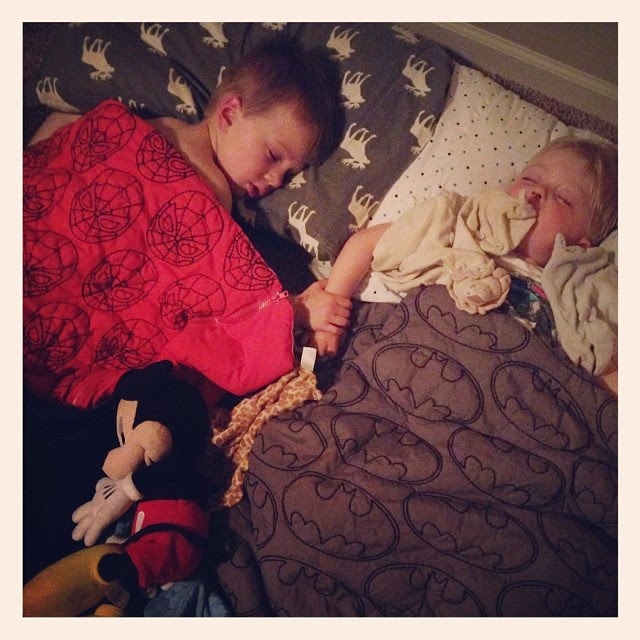 The morning following this brotherly snuggle was Kaden's first soccer game which will be a post all by itself. It was quite the interesting morning to say the least. It was so interesting that we actually headed home instead of heading out for errands and did some house work.

That evening started off a weekend full of sporting events for our favorite KC teams. Justin and I got to have a date night with Jake and Jennifer to the Sporting KC game which we easily won but we managed to miss EVERY SINGLE GOAL! We should really rethink going to sporting events when we haven't seen one another in awhile because we never stopped talking. It was a great evening and as much as I wish it could have continued, the Easter Bunny had not filled & hidden the eggs. Have no fear, the red-bull kept me up and at 1:30 in the morning I was out in our front yard making it rain eggs. 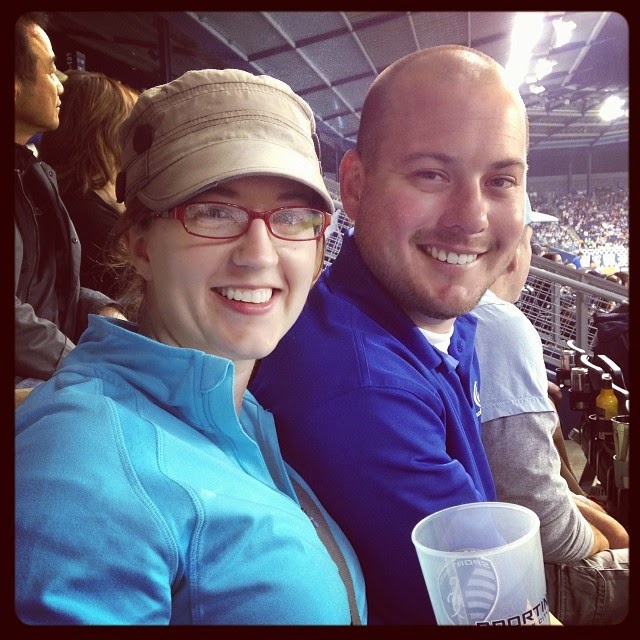 And I was right, two little boys were up very early. They "patiently" waited on the steps in their swimsuits---don't ask me why they were wearing their swimsuits, I just shake my head and let it happen--I barely got the camera out and down the steps they came… 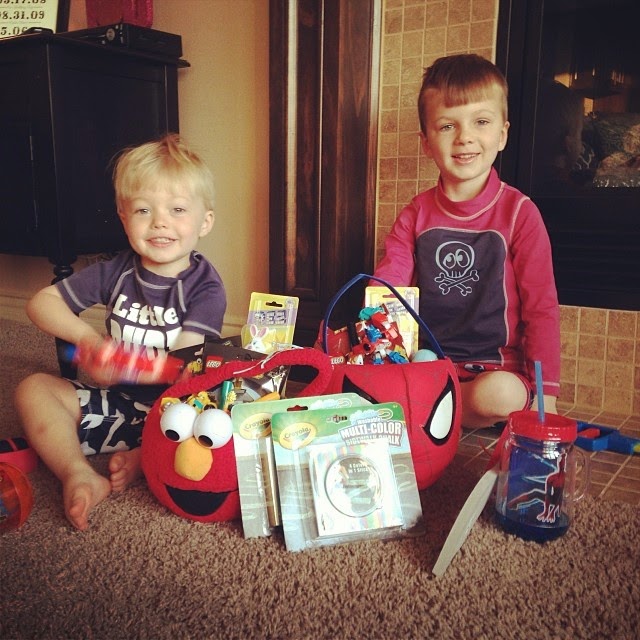 The Easter Bunny, or EB as Kaden and Logan like to call him, did pretty well and he must have gotten my note. This Mommy isn't all that big on candy so the only candy EB brought were two pez dispensers and a couple tootsie rolls for Logan and then bubble gum for Kaden. The boys got Lego Mixels, sidewalk chalk, foam swords to fight the bad guys and their favorite thing--chapstick, EOS chapstick.

Then they noticed the lawn & off they went, boots and all. 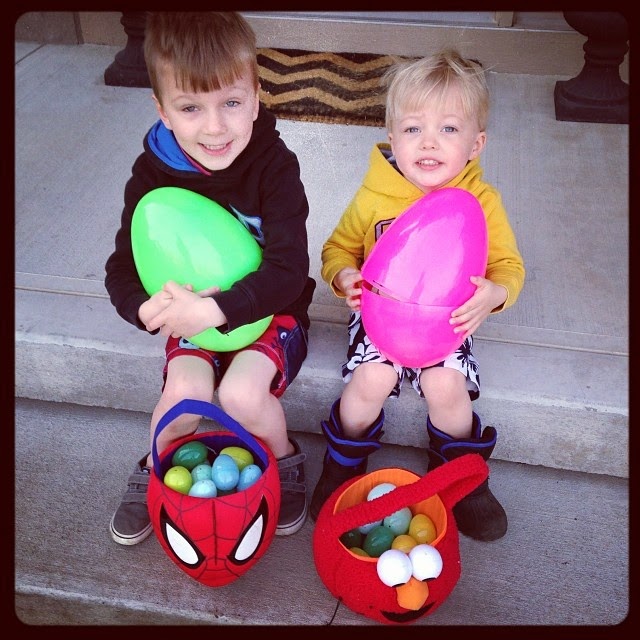 and those giant eggs where from our nice neighbor, she came over early in the morning and hid them for the boys. How sweet is that?! & they spent the next few hours opening up their eggs and enjoying their new toys. Mom got to spend the next hour or so putting together about 6 different Legos for my little guys before we headed to Grammy's house decked out in our Royals gear. AGAIN. 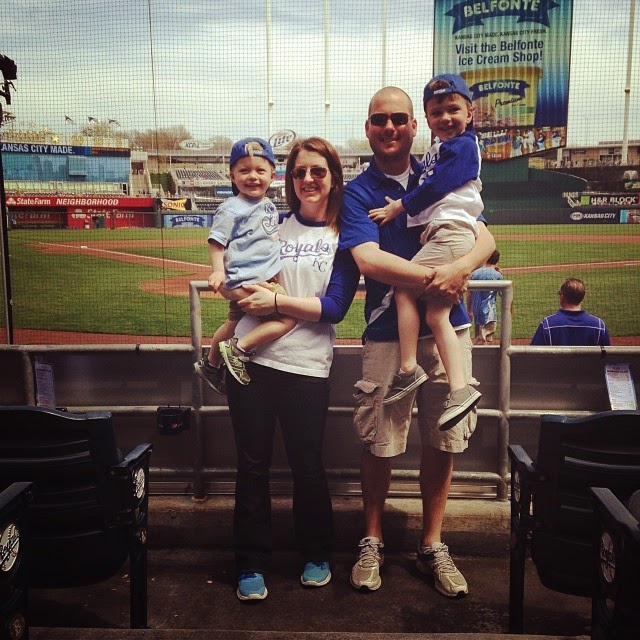 Attending the Royals game was a last minute decision but when some great tickets became available to me, I snatched them up. We love our Royals and the boys are starting to figure out who is who in Blue too. They love cheering for Moose & these seats allowed for Kaden and I to count pitches and read jerseys. Although, as good as these seats were, they couldn't keep Logan from taking a little nap & I couldn't have thought of a better place to be then right there holding him. 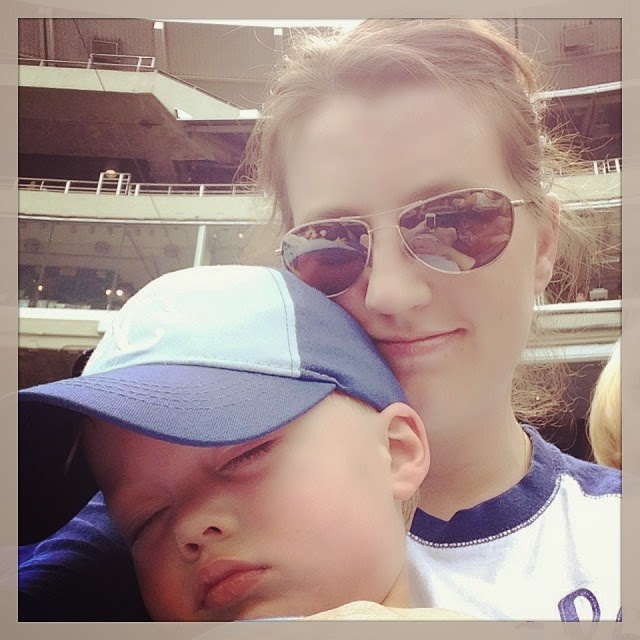 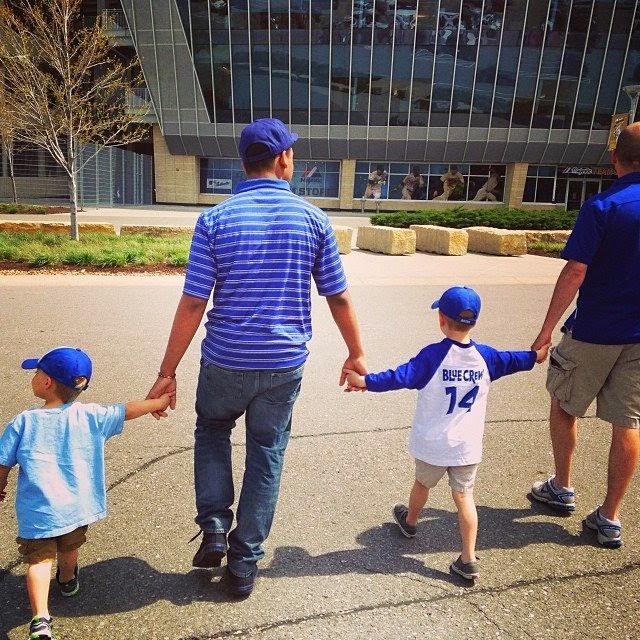 I'm not sure what it is about this picture but my boys look so big, especially Kaden. I think it may be the shirt, the 3/4 sleeve baseball t-shirt with none other than my high school number on the back. The other day he was wearing this shirt again and he had on jeans with a giant rip in the knee. The shirt had a slight frontal tuck going on and at that moment he looked 15. Please let them stay little forever and never grow up.

After the game we headed back to Grammy's to celebrate Easter with Adam, Becky and Colton. EB had left a bowl of eggs for Grammy to hide too & so the boys took off into the backyard as Justin grilled the hamburgers. We decided to give Logan a little bit of a head start because he was the littlest and we were afraid that Colton and Kaden would get all the eggs. Logan didn't need a head start, the kid knew exactly what he was doing. 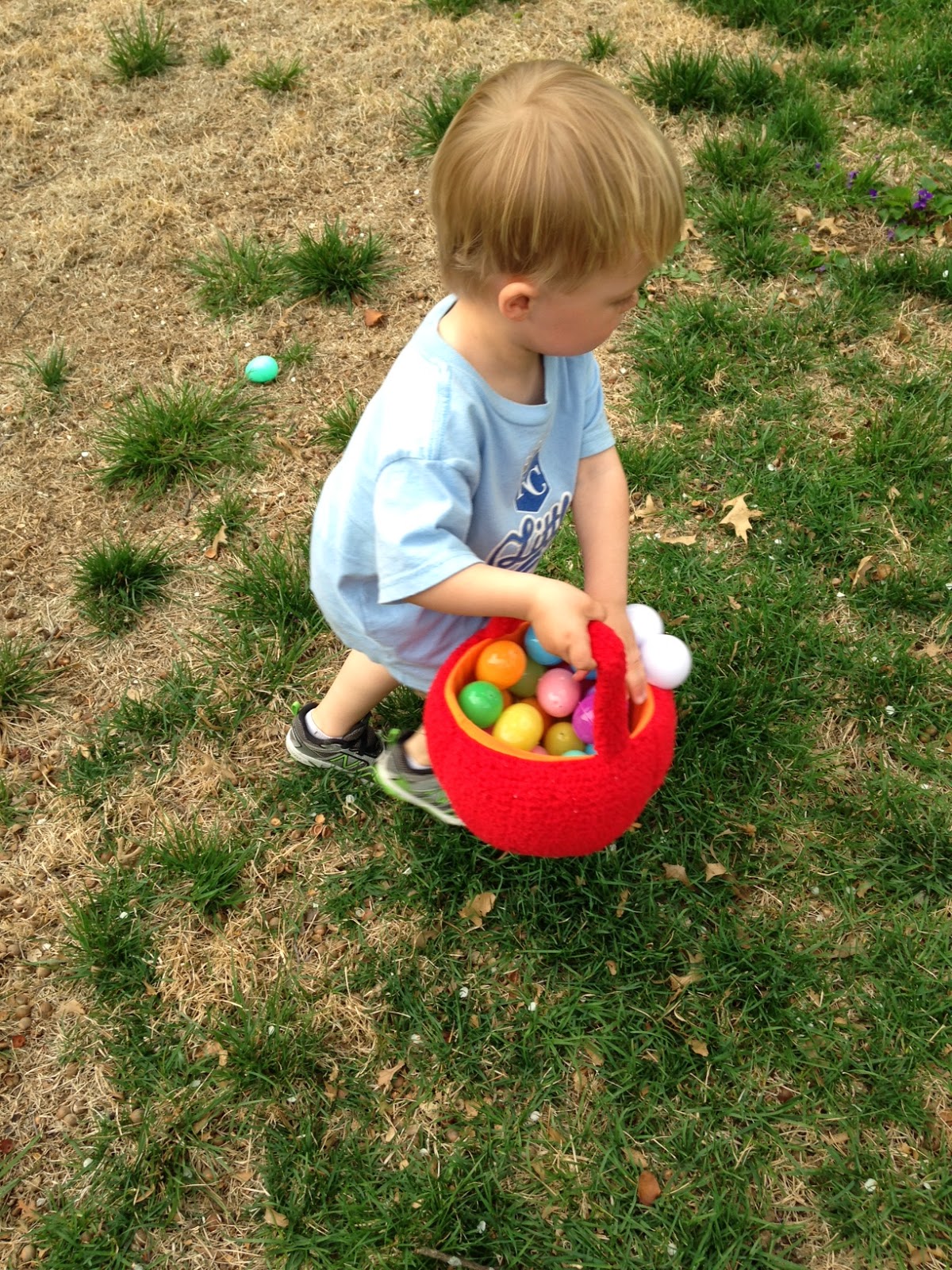 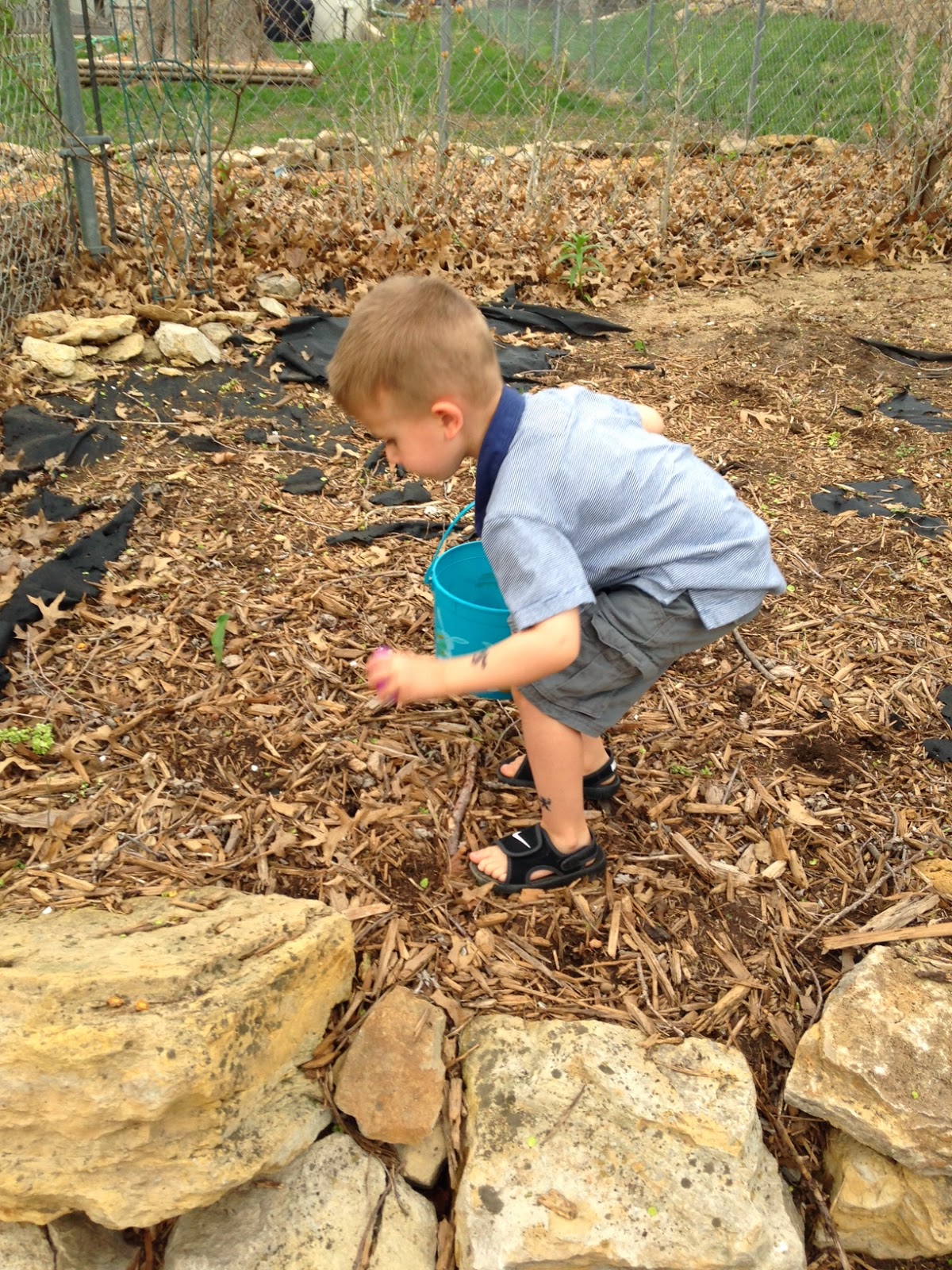 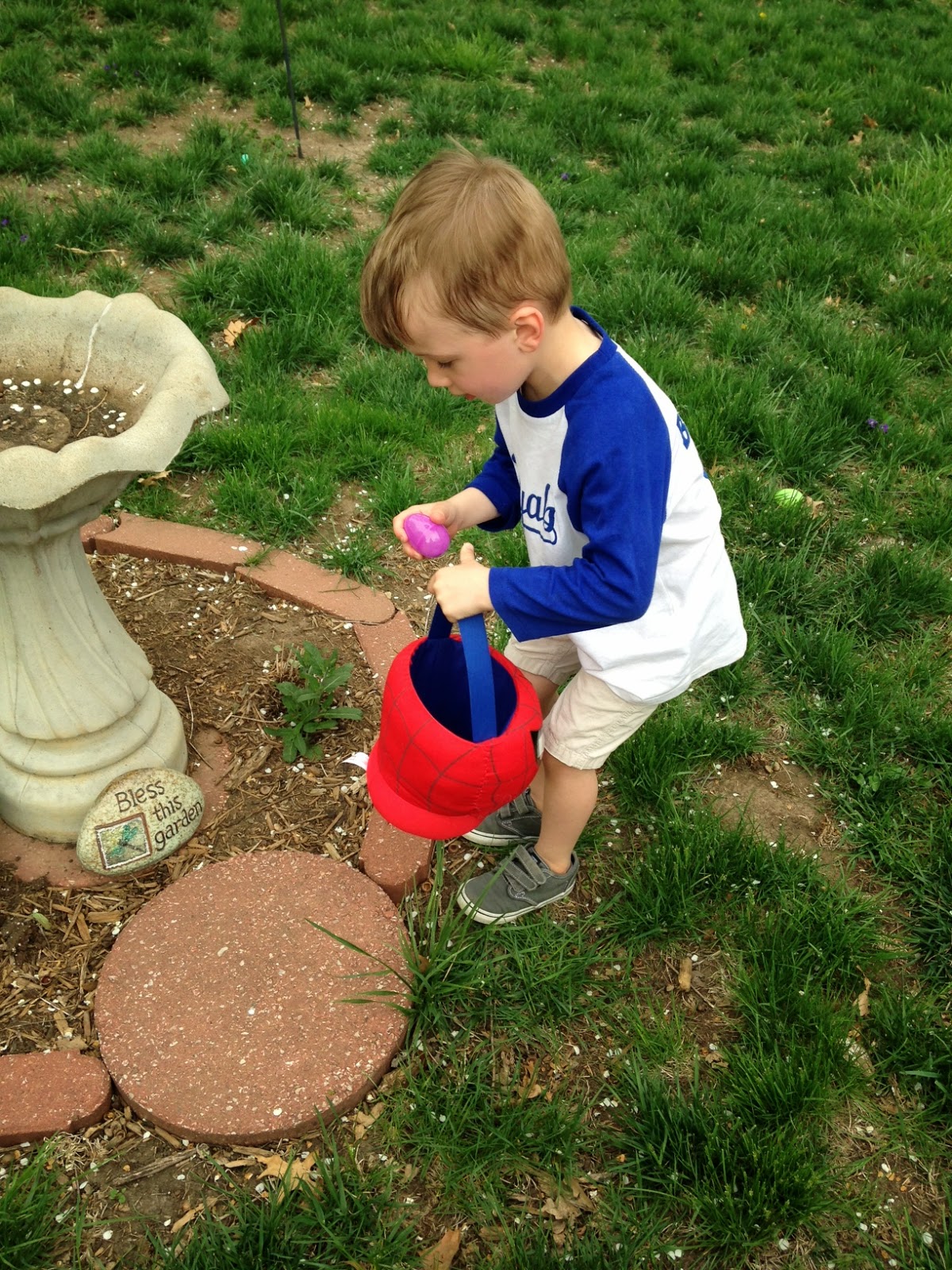 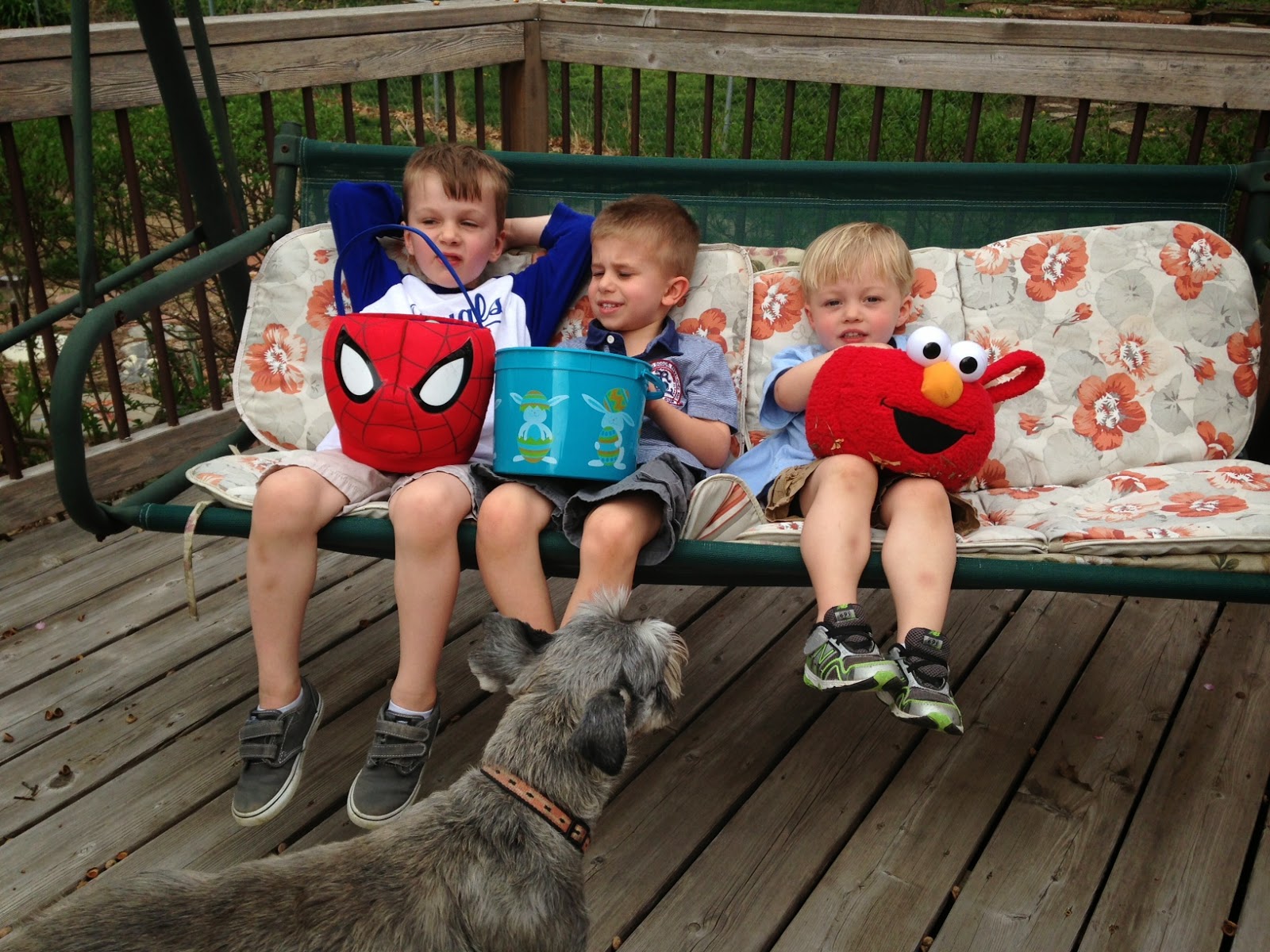 And these three weren't the only ones who were exhausted after the fun-filled weekend we had. Daddy and I both were in bed before it was completely dark and dreading getting up for work the next morning. Why couldn't every weekend be a nice three day weekend?!? We need more three-day weekends or maybe I just need to stay at home…

Right, like thats going to happen but one can dream a little.
Posted by Kayla South at 10:20 PM