We ended our first day in California with a drive inland to Pleasanton & arrived a few minutes early to Roy & Tim's house so we turned our car around and headed to a park that was just up the street. And let me just say, this city has the most beautiful parks I have ever seen. They were so clean & so big. They provided enough shade & had play gyms for all ages. The boys loved running, rolling, flying and climbing around. I loved sitting in the cold grass taking it all in. 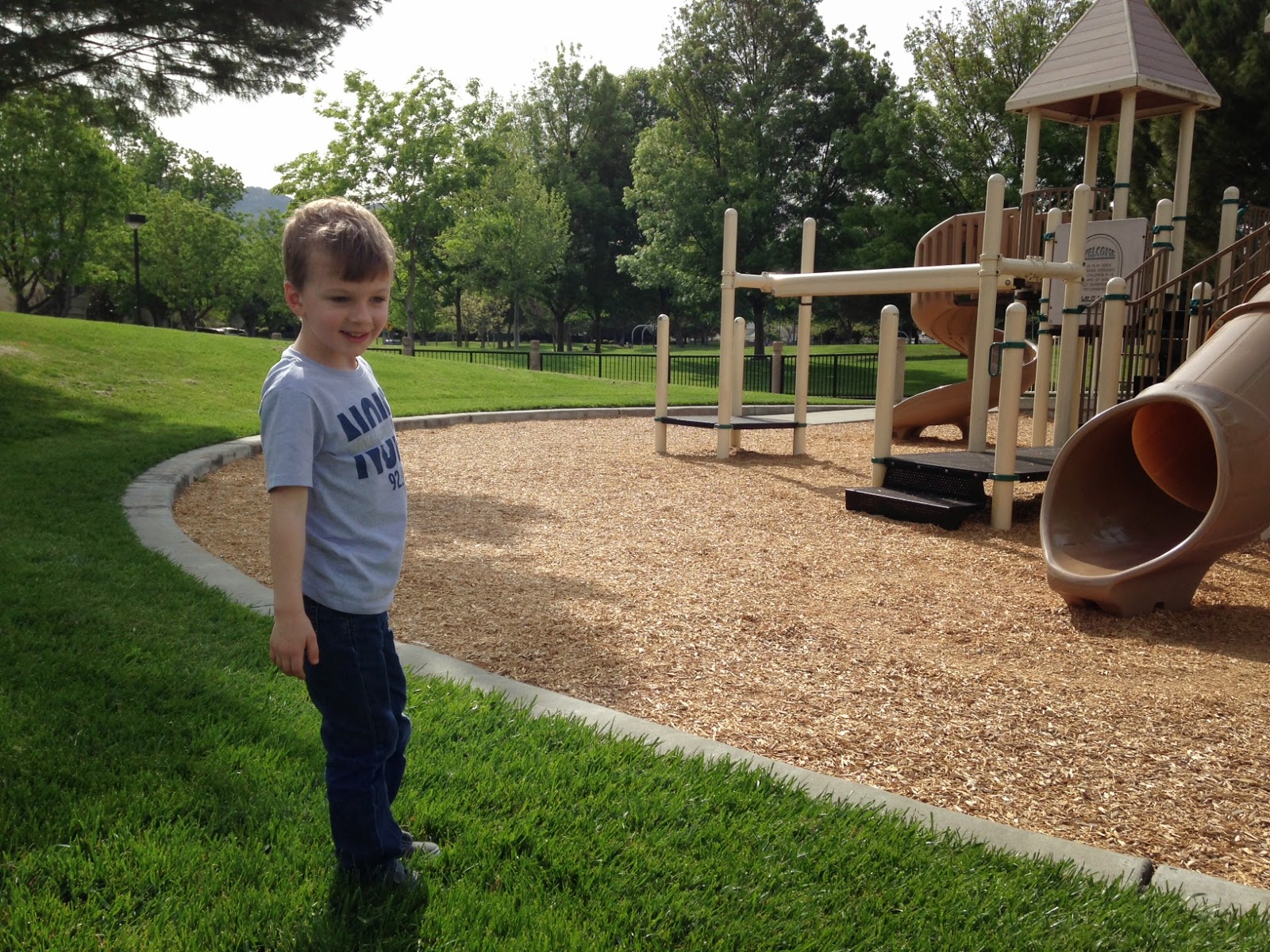 After arriving at Roy and Tim's we met Baxter the Dog and then headed out to dinner at their favorite Japanese Steak House which suited the boys well. Over the last month or so we have been to one near our house a couple times and when you ask where the boys would like to eat they respond with, "Can we go to that place where the guy cooks in front of us? That would be real fun Mom." The food was delicious and the company was even better. It was so nice to hang out with Roy and Tim on their turf because when they are visiting us, there is WAY too many family members trying to catch up with them & you never really get the time to have a real conversation.

Saturday was all about family time. Not only were we going to get to spend more time with Roy & Tim but we were going to get to see the boys-Ryan, Jack & Evan, as well as Diane and Regina. & not just for one measly activity but for a full days worth of activities. We started the day off with the boys' Karate Belt Ceremony which basically means that the boys (along with other students with the same belt color) preform their form routine in front of a instructor & if they met the requirements & were respectful at home and school then they would be given their next belt. All three boys did an amazing job on their form routine & were awarded their yellow belts. 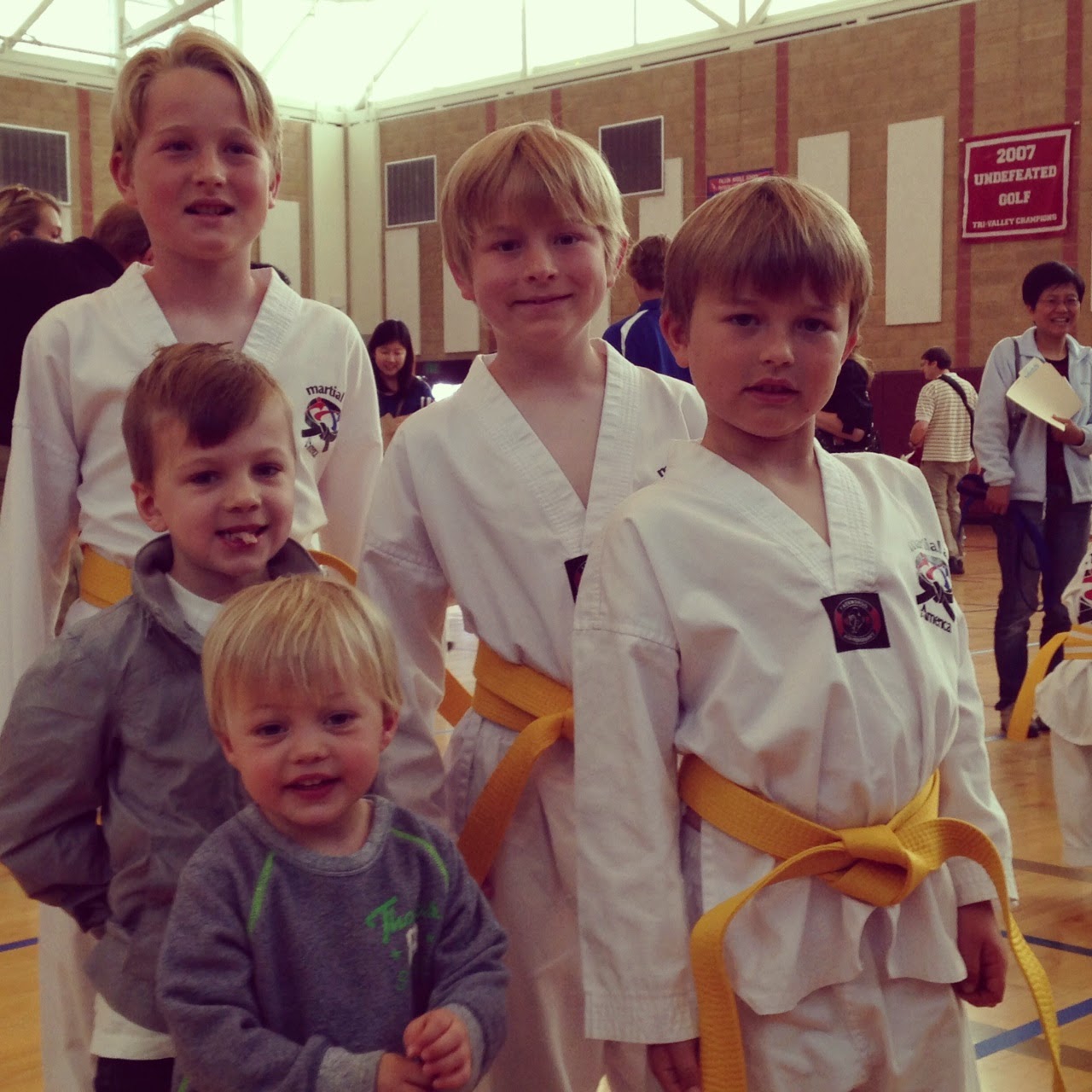 It was pretty special to sit there in the audience and watch this all unfold. I'll admit it, I got a little choked up watching the boys receive their belts from their moms and dads. 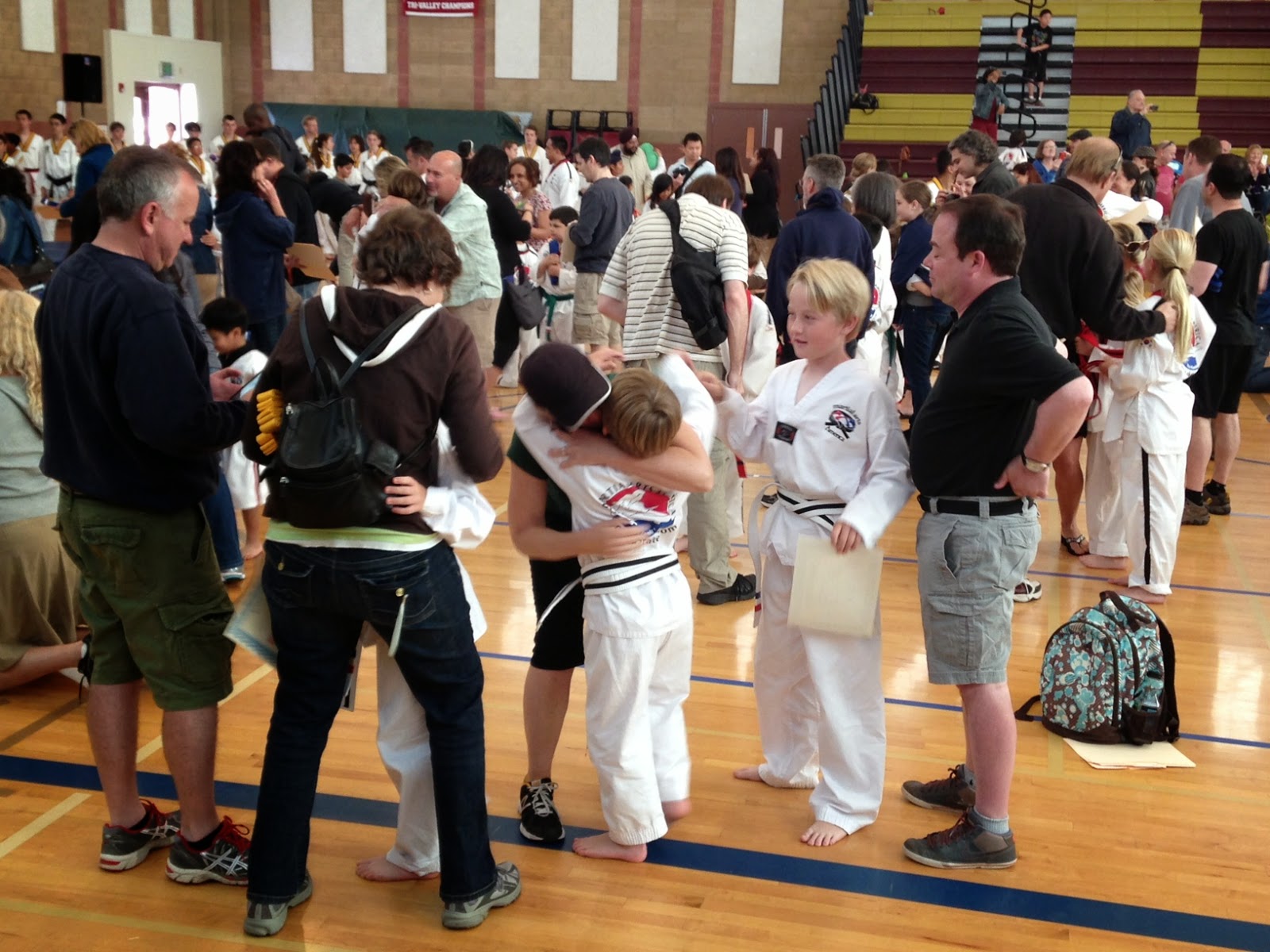 The entire ceremony lasted a little over an hour and both Kaden and Logan sat pretty quietly eyes glued to those who were sparring and testing. And almost every day since they have been playing "karate" & thought it was TOTALLY AWESOME that their mom (me) was in Tae Kwan Do when I was little too. This is me at my yellow belt ceremony. 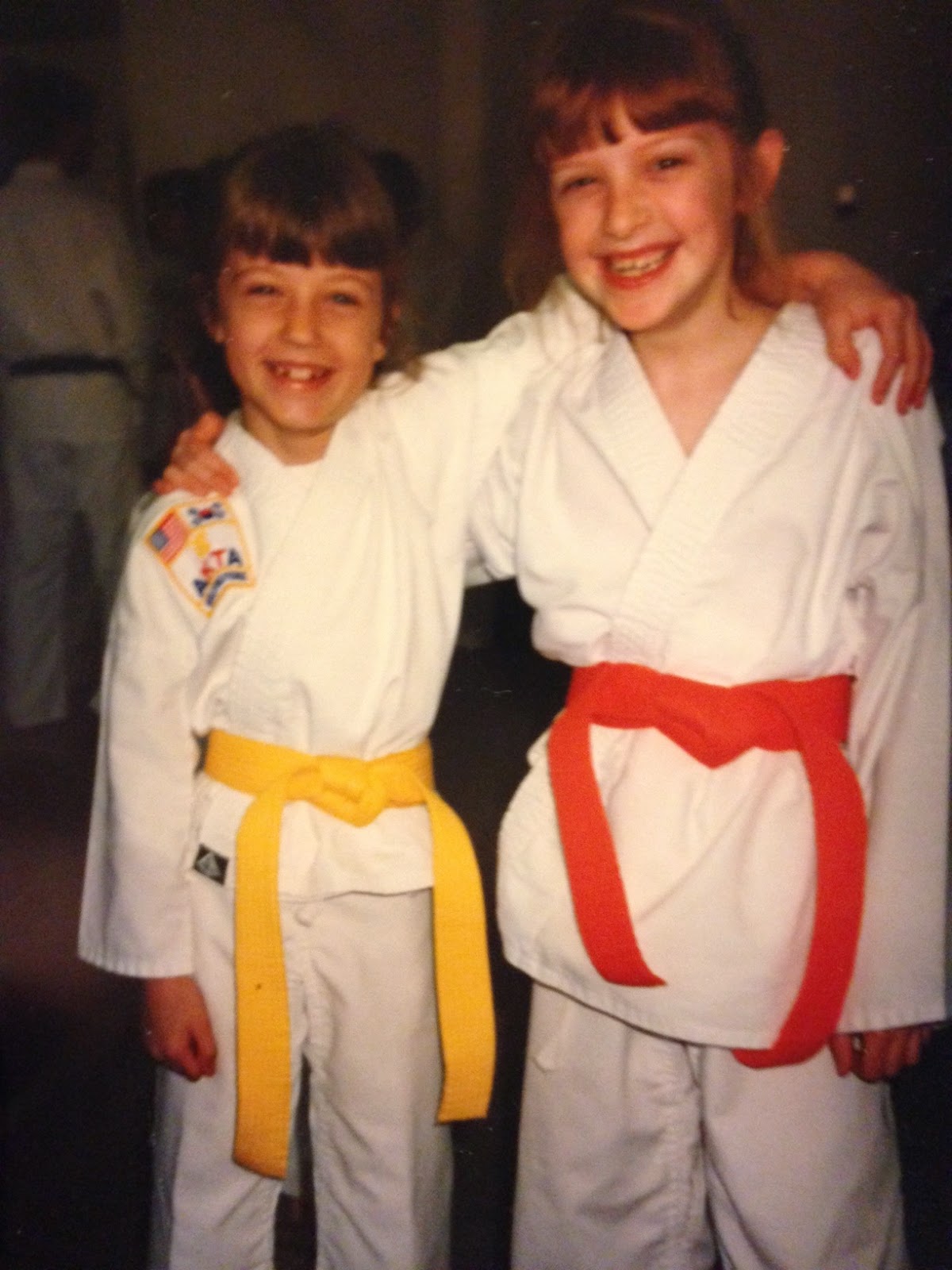 We had a little downtime between Karate and Evan's baseball game so we decided to check out their local farmers market which again, did not disappoint. The strawberries were delicious. The cinnamon rolls were beyond huge. The weather, well it was perfect and continued to be perfect for the rest of our stay. 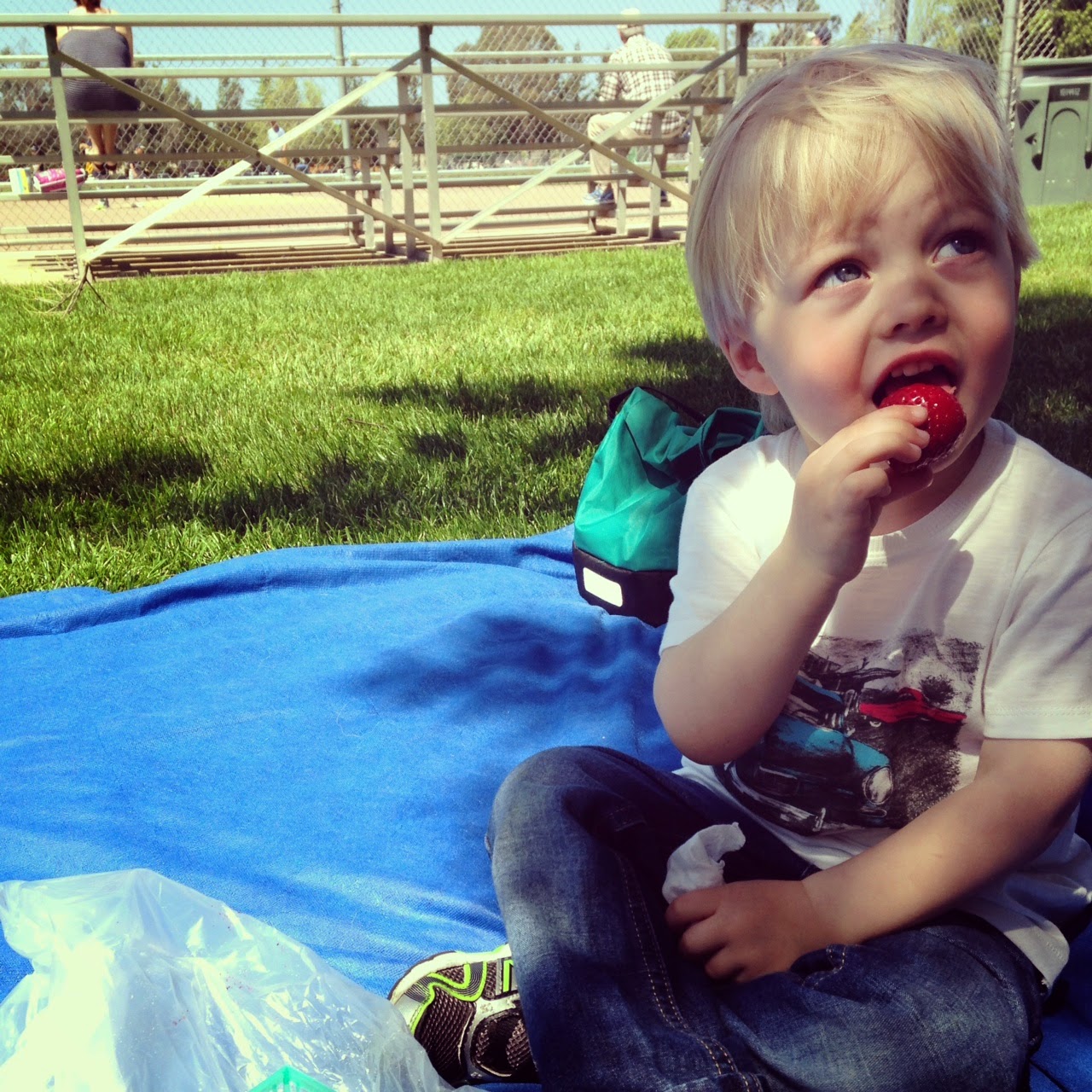 Naps, well they were non existent on this trip, as they should be. Saturday's nap time was postponed due to Evan's baseball game. Evan is 7 --- we had boys that were basically 11, 9, 7, 5, 3 on this trip --- and he plays one mean game of baseball. In just that one game he played catcher, first base and third base. He had a couple of great hits & you could tell he is a very competitive little man & will be an amazing athlete. While Evan's game was going on the other boys played catch with both baseballs and Frisbees, they ate chocolate and Fruit by the Foot, & they chased each other around. After the game was over it was time for more fun. Justin and Tim went back to the house to get the food going for the BBQ and Roy & I took the boys to a trampoline park. To say that the boys LOVED it there would be quite the understatement. They were fearless when it came to jumping and jumped right alongside the big boys. For the next hour the boys jumped non-stop, didn't get hurt and were a sweaty mess by the time we left---just the way it should be. 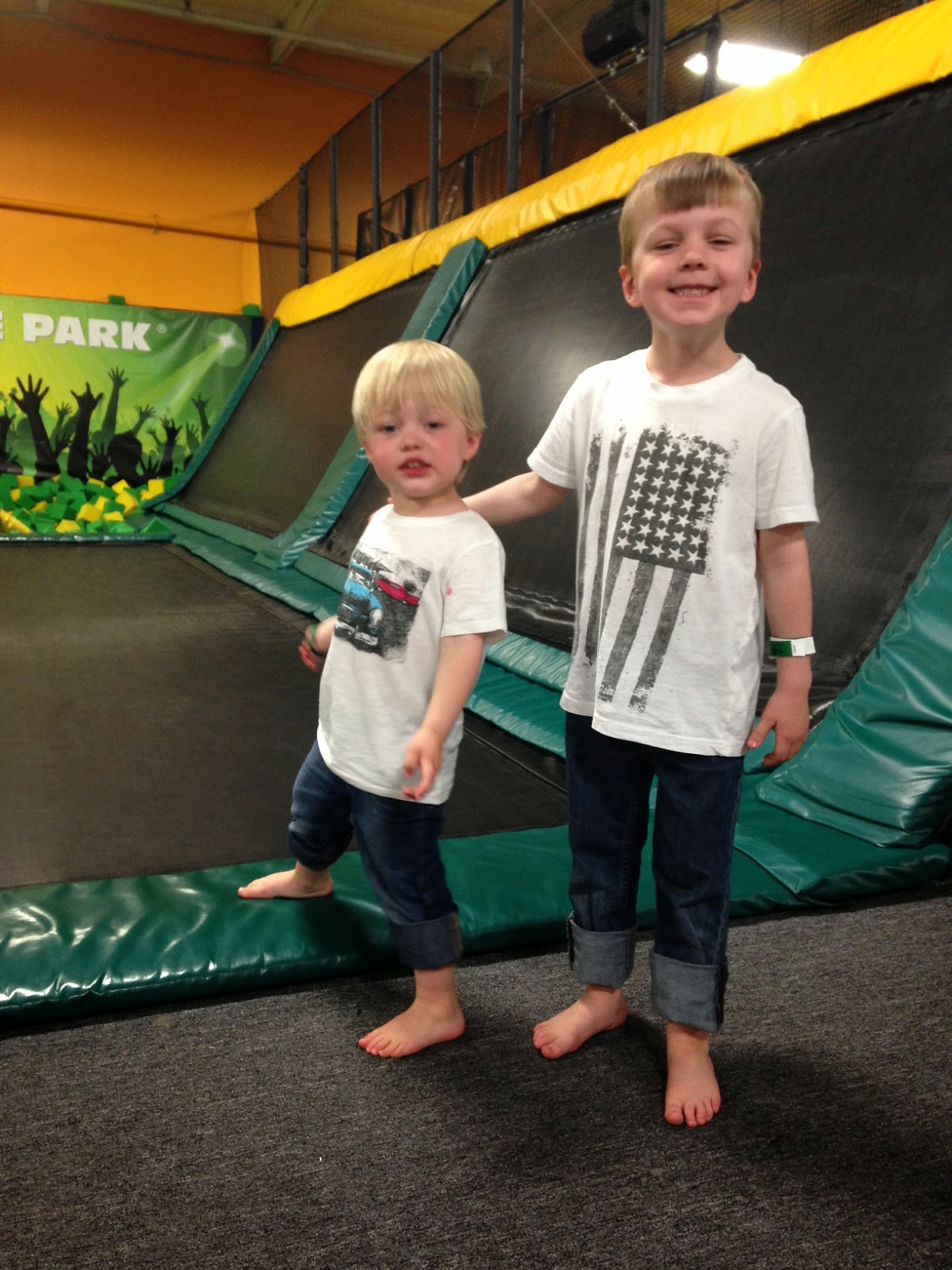 When we returned to Roy & Tim's we had just enough time to head down to the park for one last spin on the giant concrete slide. & this time they both were a little braver and decided to try it out with the cardboard that was left behind--excuse the annoying screams. 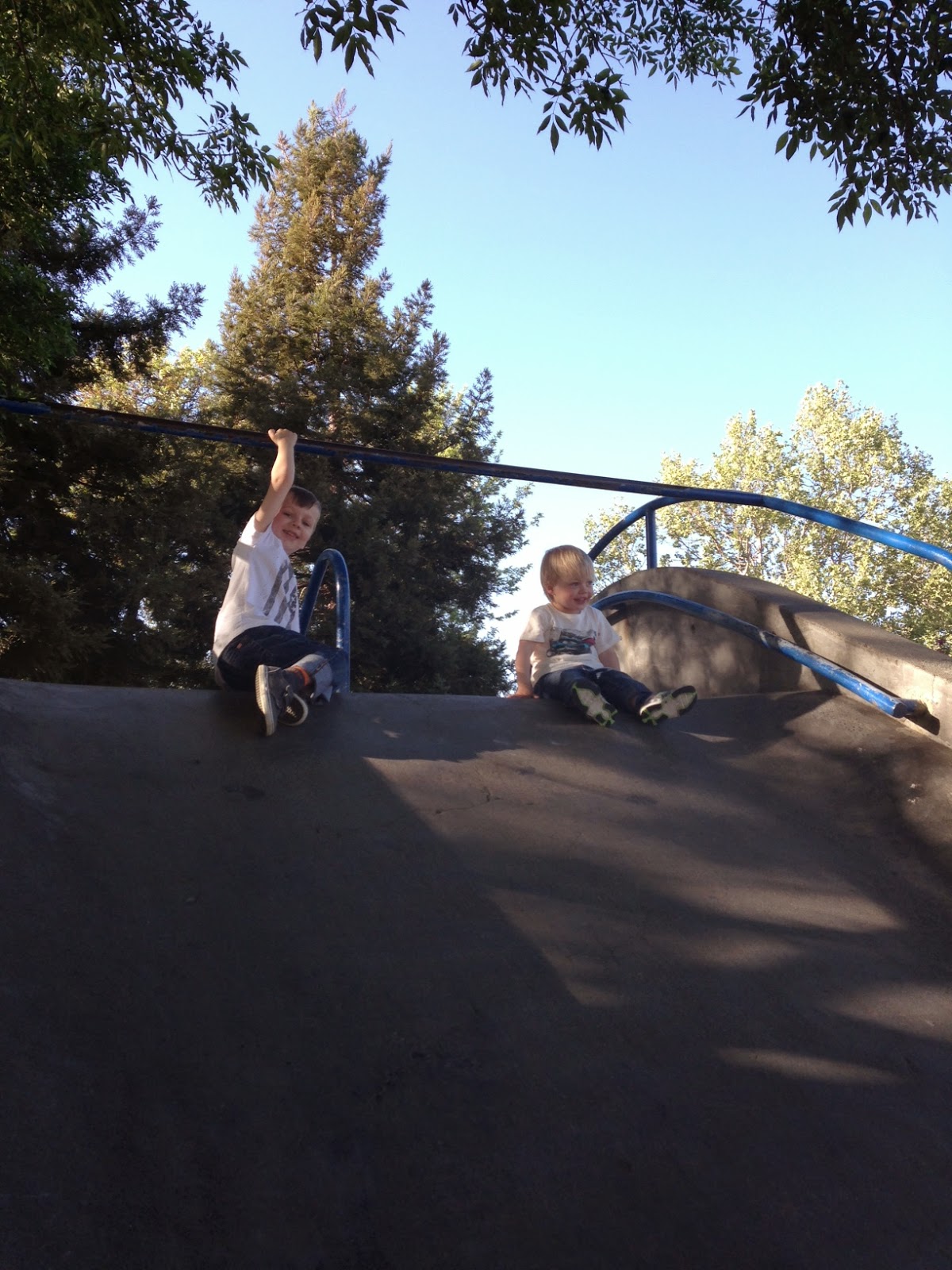 We finished the evening up with one giant family BBQ. The kids played nicely with one another. The adults got a lesson in all things bees from Evan's friend who was sleeping over---seriously the kid could have wrote a book on bees. He and his father just received thousands of bees earlier that day to start harvesting their own honey. We also had the privilege of hearing Evan sing the National Anthem, the kid is fearless and has a great voice for a 7 year old & his brother Ryan, well he had some of the best jokes that I have heard in a long time. That evening was filled with so many smiles & wonderful memories were made. It was tough saying good-bye to family but lucky for us, they're all coming back this summer for some time at the lake. I know two boys who will eagerly be waiting. 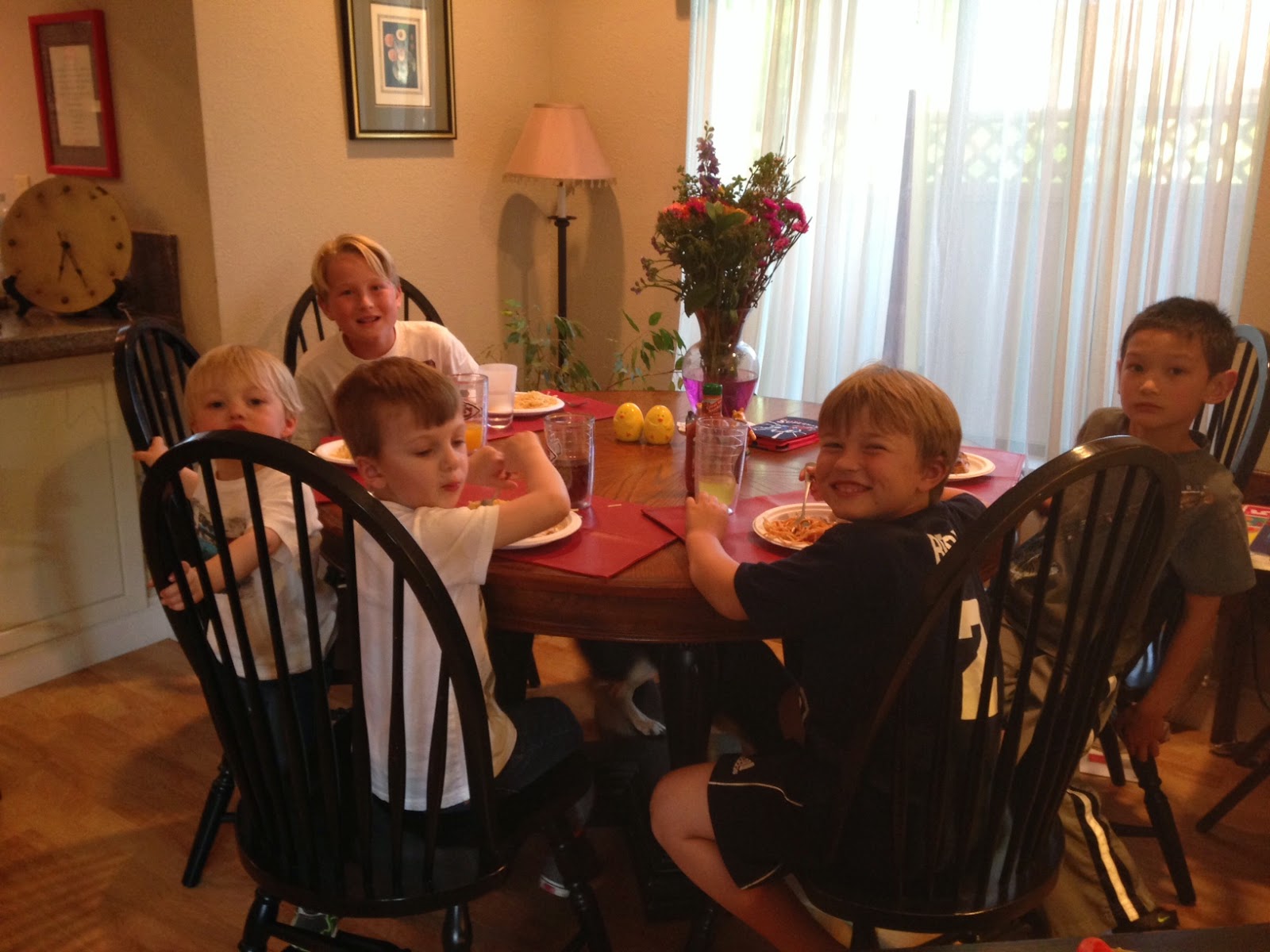 Unfortunately our fun ended that evening because the next morning we woke up, loaded up and headed back to the airport. The boys and I walked those moving walkways at least 20 times--I was doing my best to wear them out and it worked with Logan. As soon as we took off he laid his little head down on my lap and he slept the entire way. Kaden, well we couldn't have asked for a better experience, we actually had multiple people tell us how great they were and they didn't even realize kids were behind them. Like I said, they did an amazing job but once again, I was so happy when we touched down in KC. So, here's to hoping the flight to St. Maarten goes just as smooth as this flight did. & if it doesn't, at least we have Papa Tom, Grandma Sara and Grammy to pass them off too!

Thank you Roy & Tim for your hospitality, our {mini} vacation was everything that we had hoped for--full of wonderful family memories.
Posted by Kayla South at 9:47 PM