A {Mini} Family Vacation--Day One.

One of the perks of traveling for work is raking in the airline miles. In February, Jennifer and I went on a little girls trip to Chicago on points & because one of the flights was canceled, we got our points back--Boo-to-the-Ya!

I had a trip scheduled for some time now in San Fran to meet with a few clients at Schwab and when I brought up the idea of Justin and the kids going with me, he jumped. You see, Justin has family that live in Pleasanton which is outside of Oakland & it had been awhile since we had seen everyone. This would make for the perfect little get away. I purchased the tickets, Justin rented the car, & off we went.

We had a three hour and fifty minute flight ahead of us. We were keeping our fingers crossed that the boys would be the most well-behaved little fliers known to man but they haven't flown for over a year so we really didn't know who would be showing up for that flight. I came prepared. A full bag of treats, sandwiches, candy--gum for Kaden and suckers for Logan, workbooks and of course movies. I drew the lucky straw and sat in the middle of both boys as Justin sat across the isle and had a nice cold beverage. 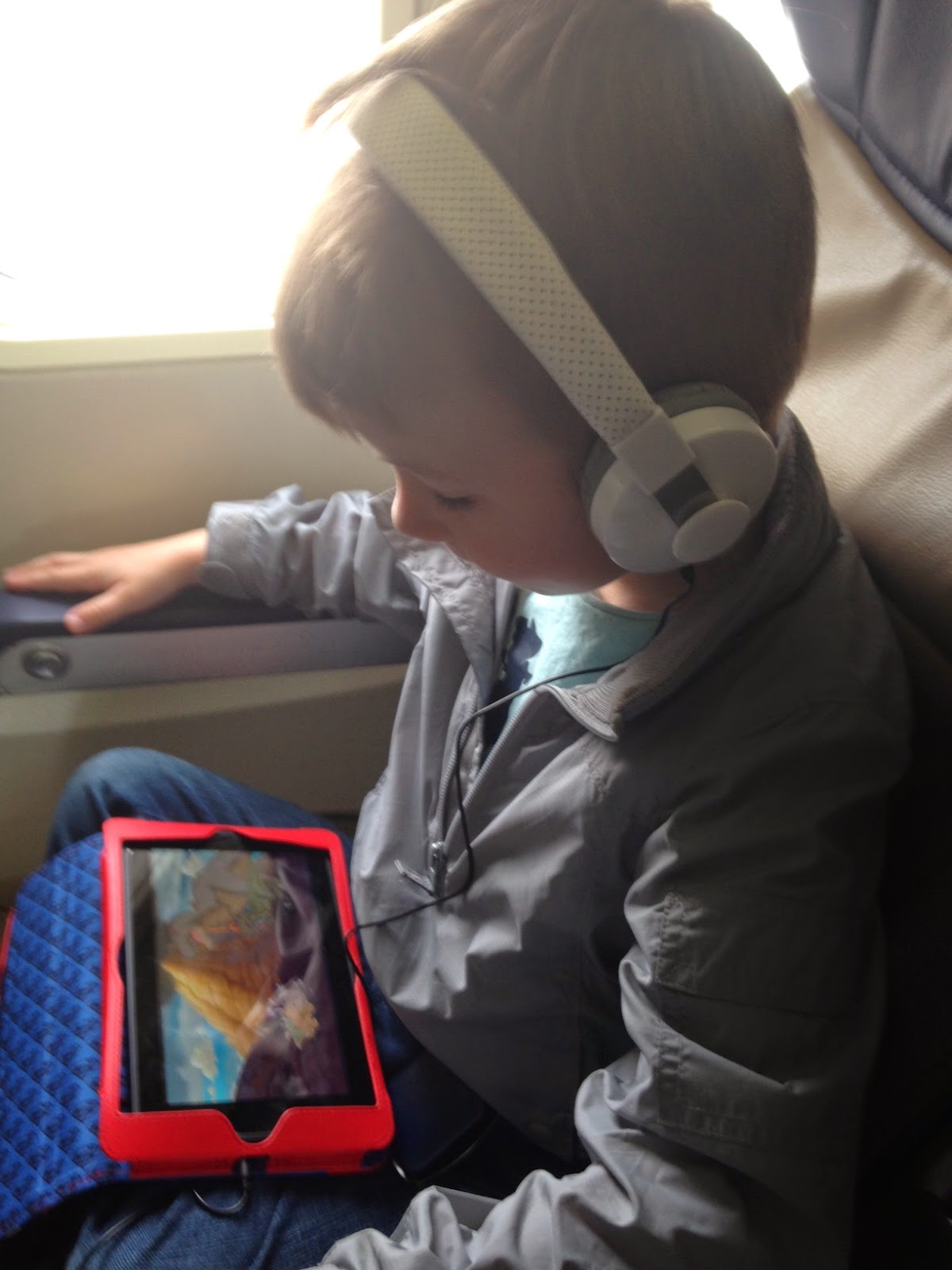 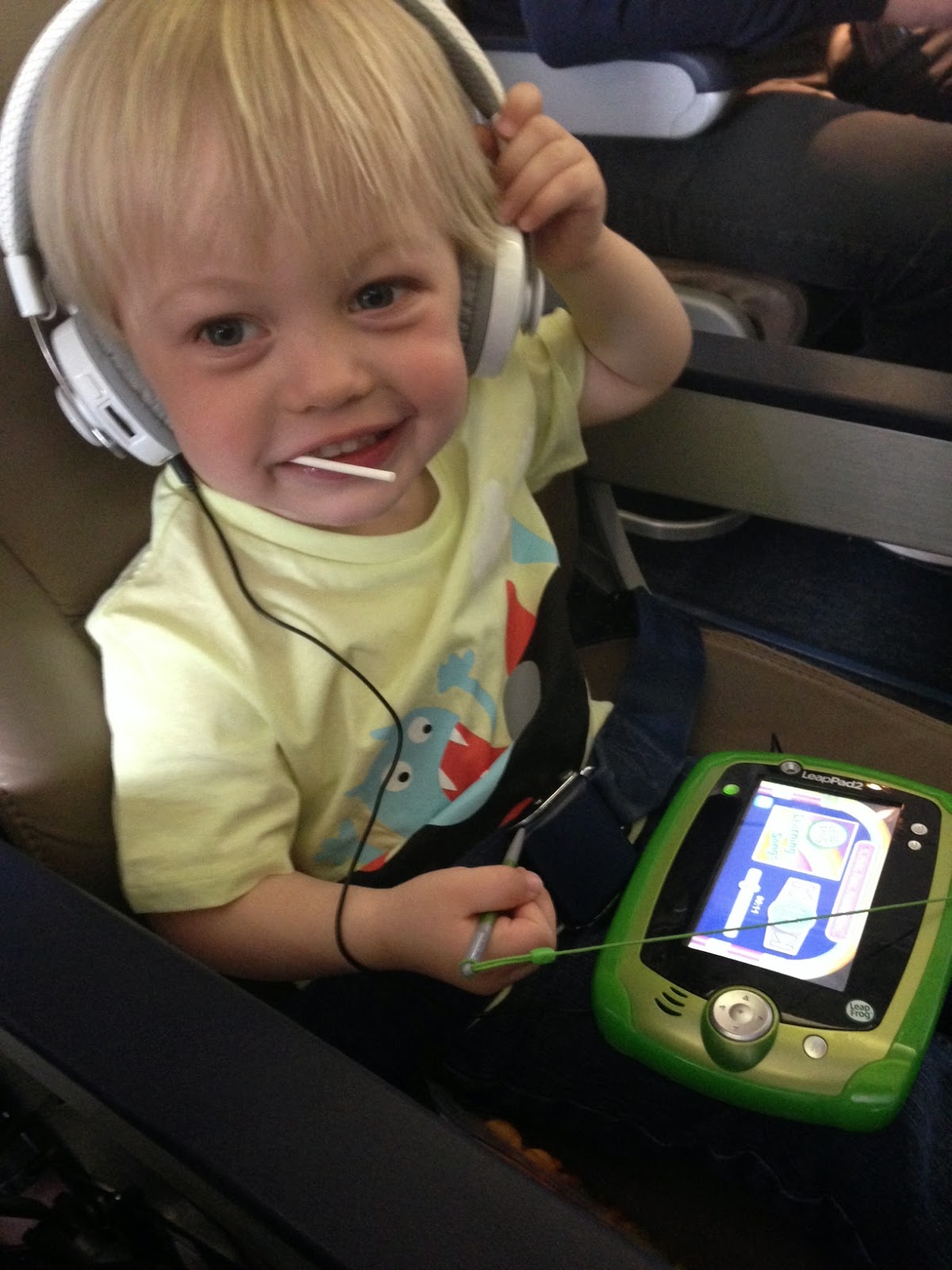 & honestly, for the most part they were amazing. I had to remind Kaden not to put his feet on the chair in front of him & for Logan to stay seated but other than that they were pretty happy fliers. Still landing couldn't have came soon enough the boys were on edge and we were pushing our luck.

The boys had two things they wanted to do on our trip. Fly in the airplane-Check. Ride on a "school" bus. You should have seen their eyes when we boarded the shuttle that took us to the car rental--they were so excited. The other passengers, not so much. They, like Justin and I, were just ready to get to our destination but by the time we pulled up to the car rental location the boys had Justin and I and everyone else within earshot smiling.

An hour later we arrived at our hotel for the evening and as we were led to our room Kaden kept opening his arms and waving them around singing, "Welcome to the Hotel. Welcome to the Hotel." The boys were beyond amazed with room service & the hotel staff was so patient and kind with the boys. As they brought in our dinner Kaden would introduce us all to the waiter and the two of them would strike up a little conversation. One waiter kept telling Justin and I just how blessed we were, that the two of them were so beautiful. He's right.

Finally it was lights out & it took all lights being turned out for the boys to finally fall asleep. On Friday morning the boys walked me to my meeting and then went off to explore. 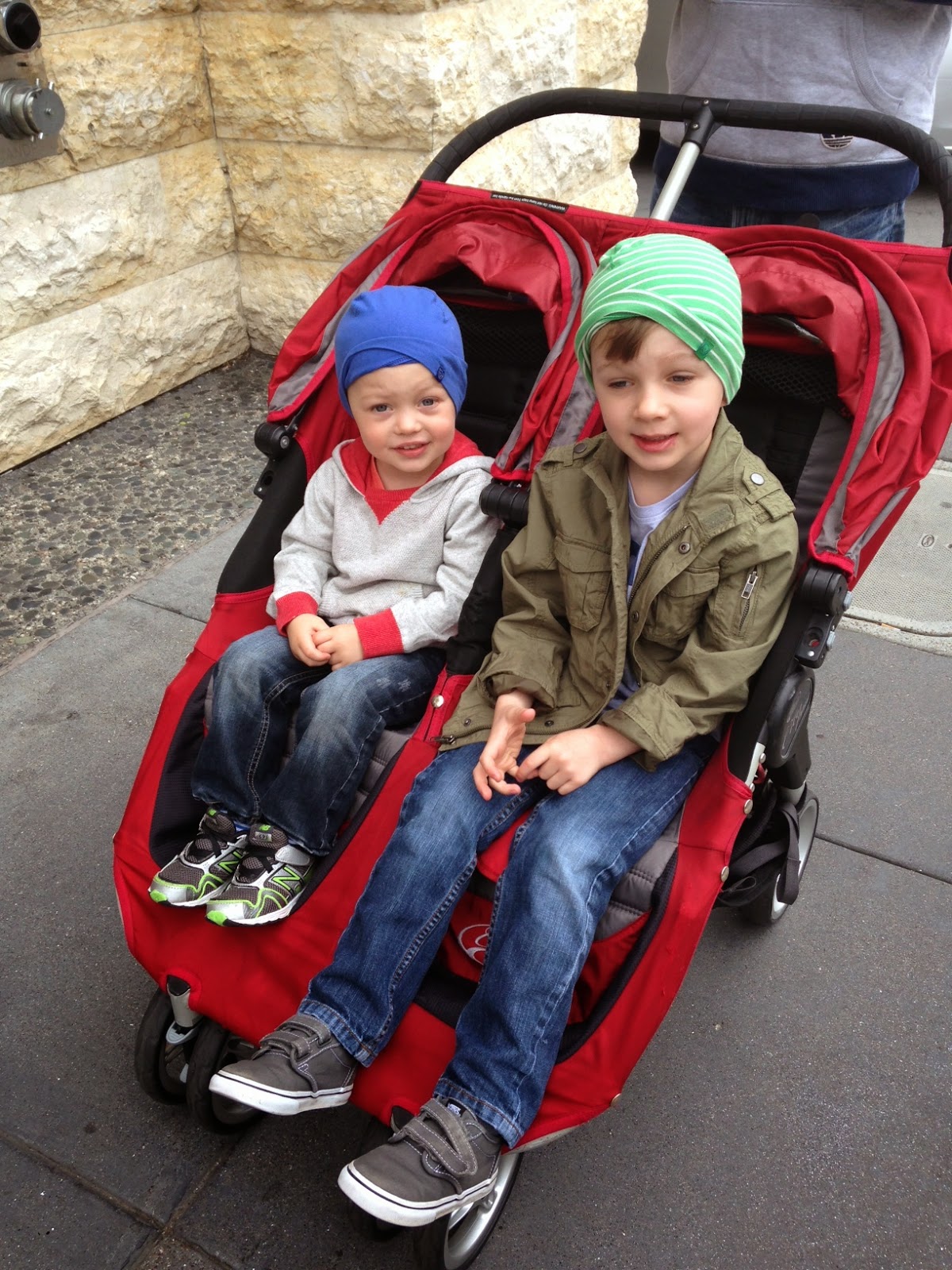 One of the smartest things we did on this trip was to rent this Mini-City Double Stroller. I wasn't that excited about lugging ours on the plane and risking the strollers getting broke and taking just one was out of the question because you know that is the moment you will need a second one. So I went to Google. I Googled Stroller Rental in San Fran and what do you know, something came up. I was worried it was going to be outrageously priced and an inconvenience to pick up and drop off but to my surprise it wasn't. The strollers are rented for a 3 night period which was perfect for us and it was dropped off at our hotel on Thursday and picked up at the car rental location on Sunday. It seriously couldn't have been easier and even if we would have just used it for one day, it would have been worth it.

The boys covered a lot of ground while I was in meetings but finally they were over and I was able to catch up to them. My goal for the trip was to see and take a picture near the Golden Gate Bridge but the foggy weather had something else in mind for us--Pier 39. We took the boys to see the Sea Lions & although it was super chilly, they loved watching them. 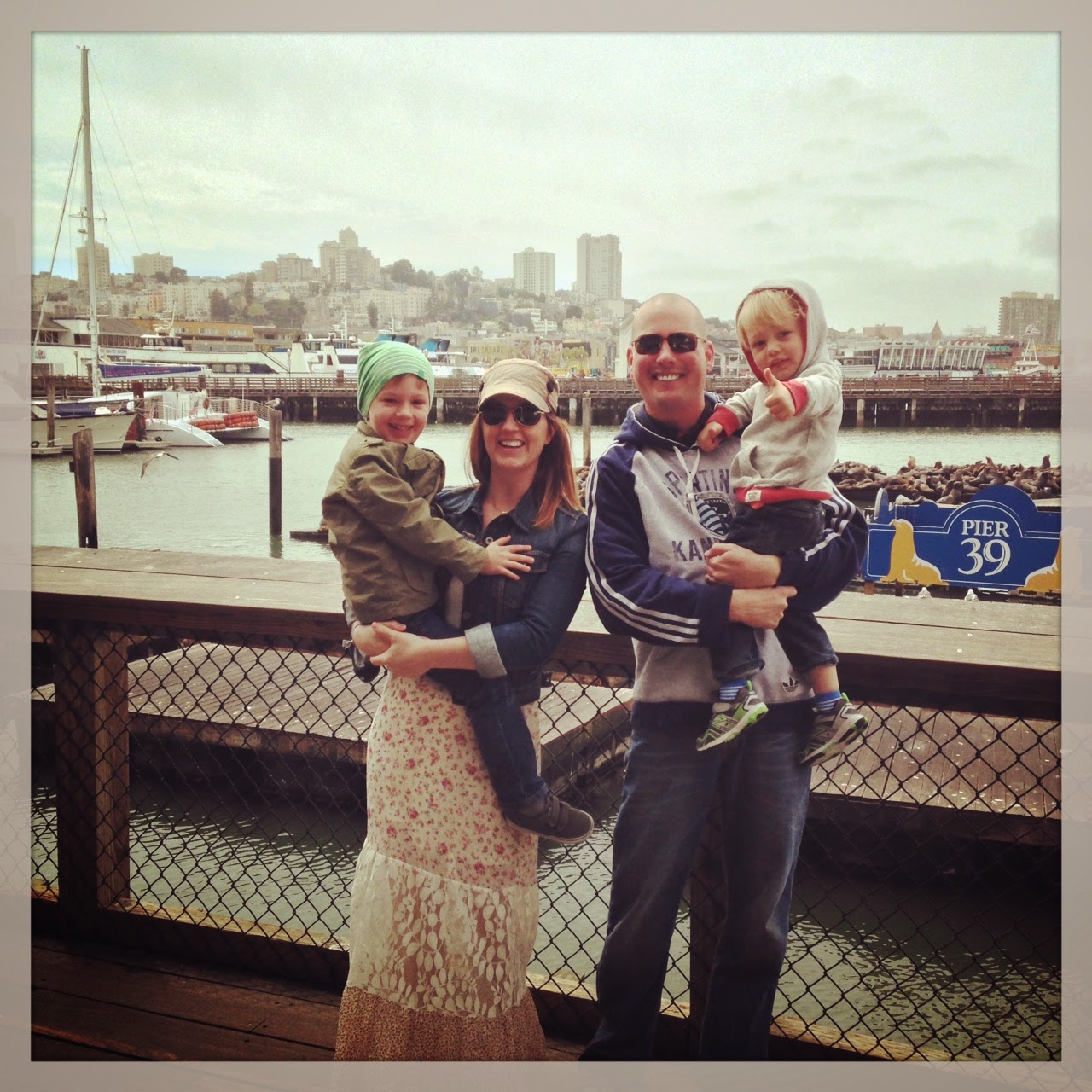 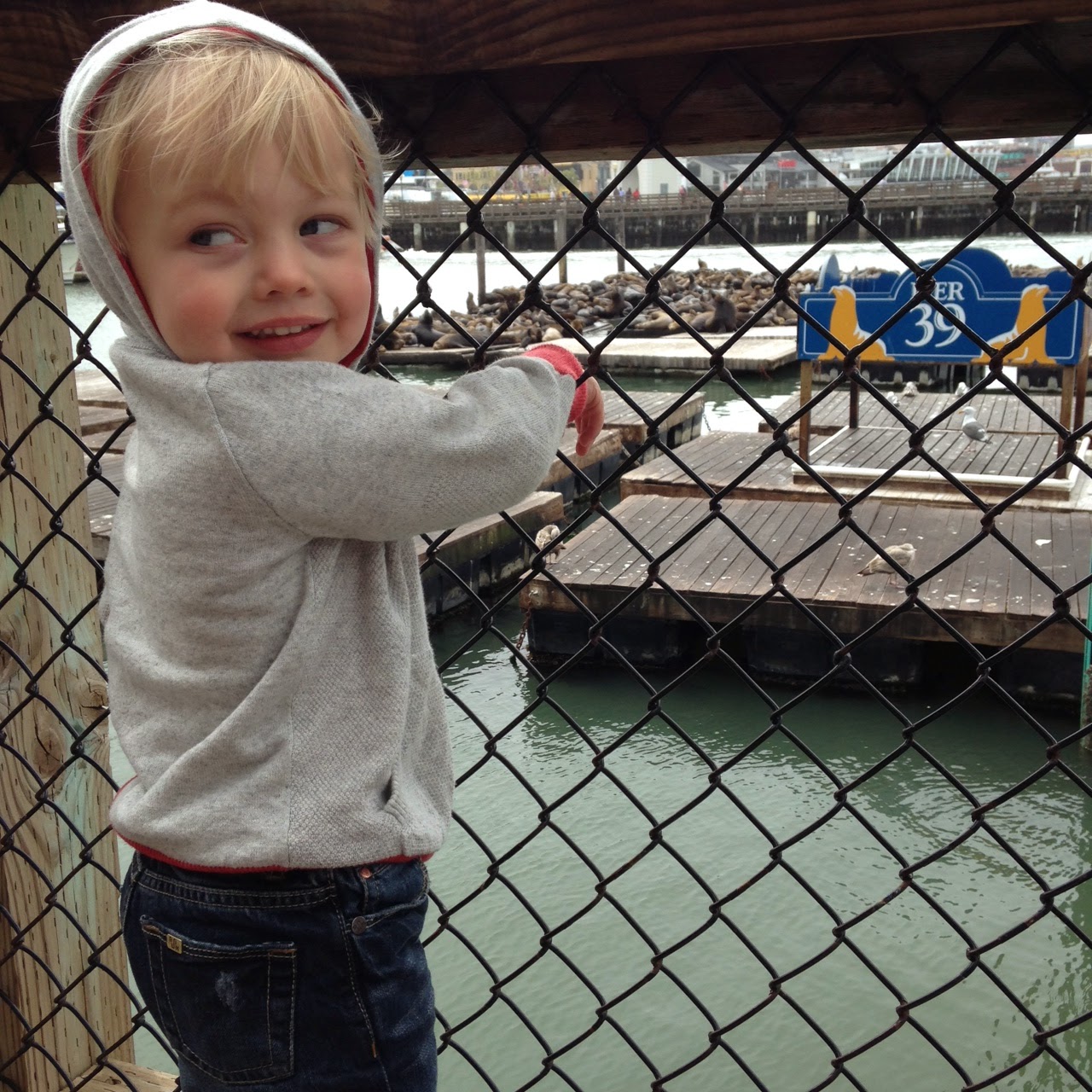 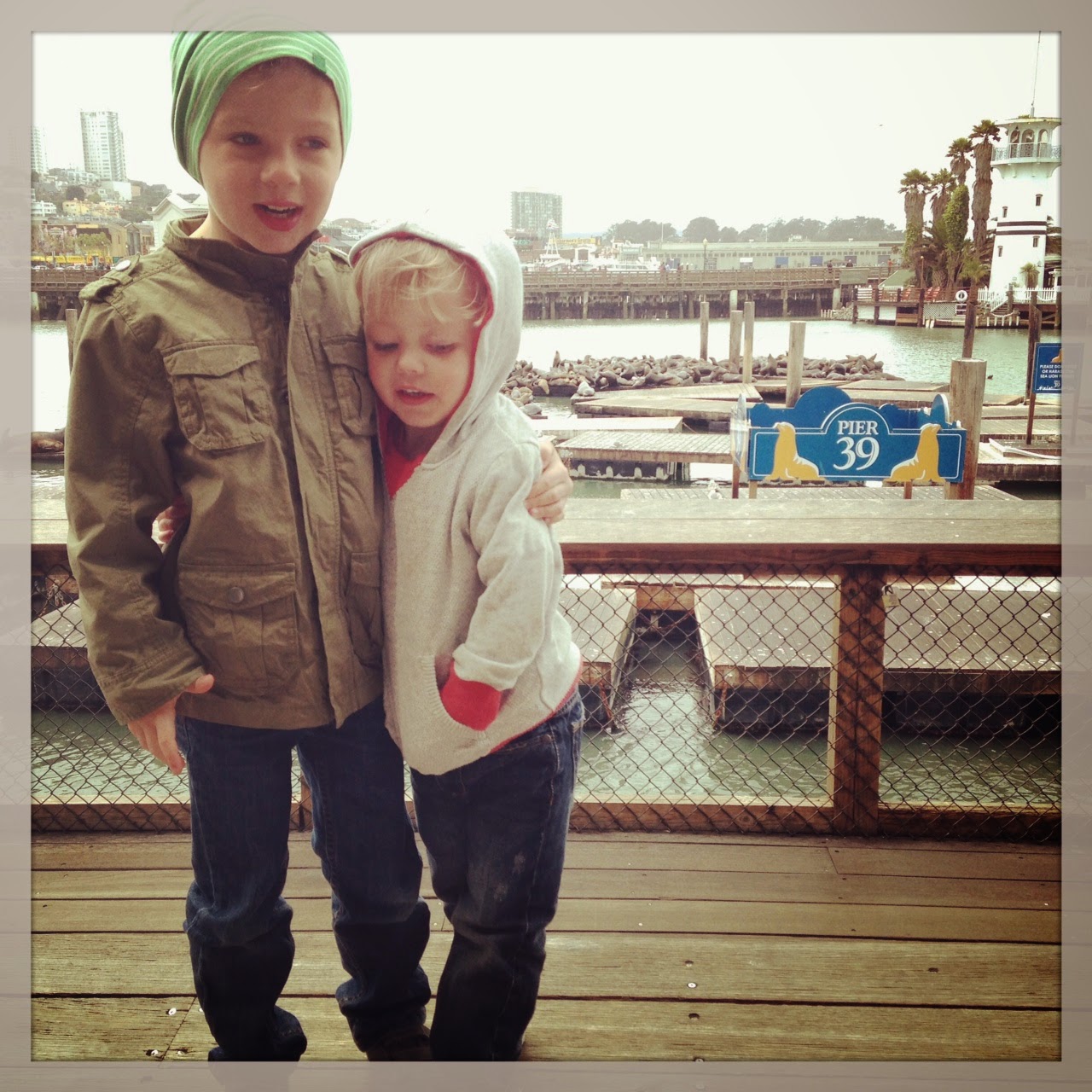 We ducked into a little arcade to let the kids get down and roam & wouldn't you know it, they picked the lucky case when it came to Deal or No Deal. 400 tickets later & the kids had their prize---one small bag of Gummy Ring Pops of which they have completely forgot about and I won't be reminding them about them either. 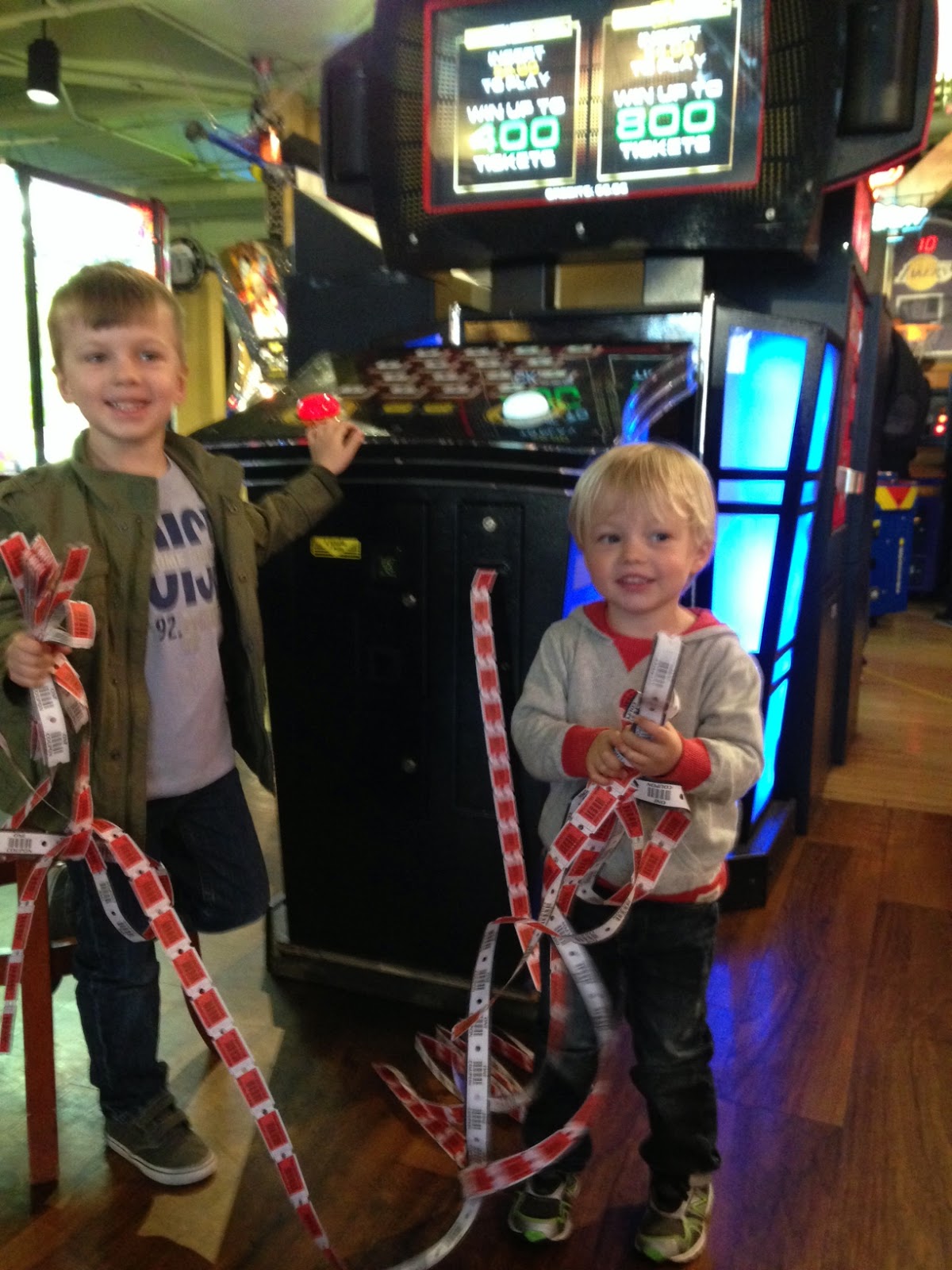 and as we came out of the arcade Logan spotted the carousel. He was begging to be ride it, just one time, Mommy. And seriously, who am I to say no on 'vacation'? So we rode it. Just once but as soon as it was over he wanted to go again and was so upset that we had to get off so others could get on. Poor guy. 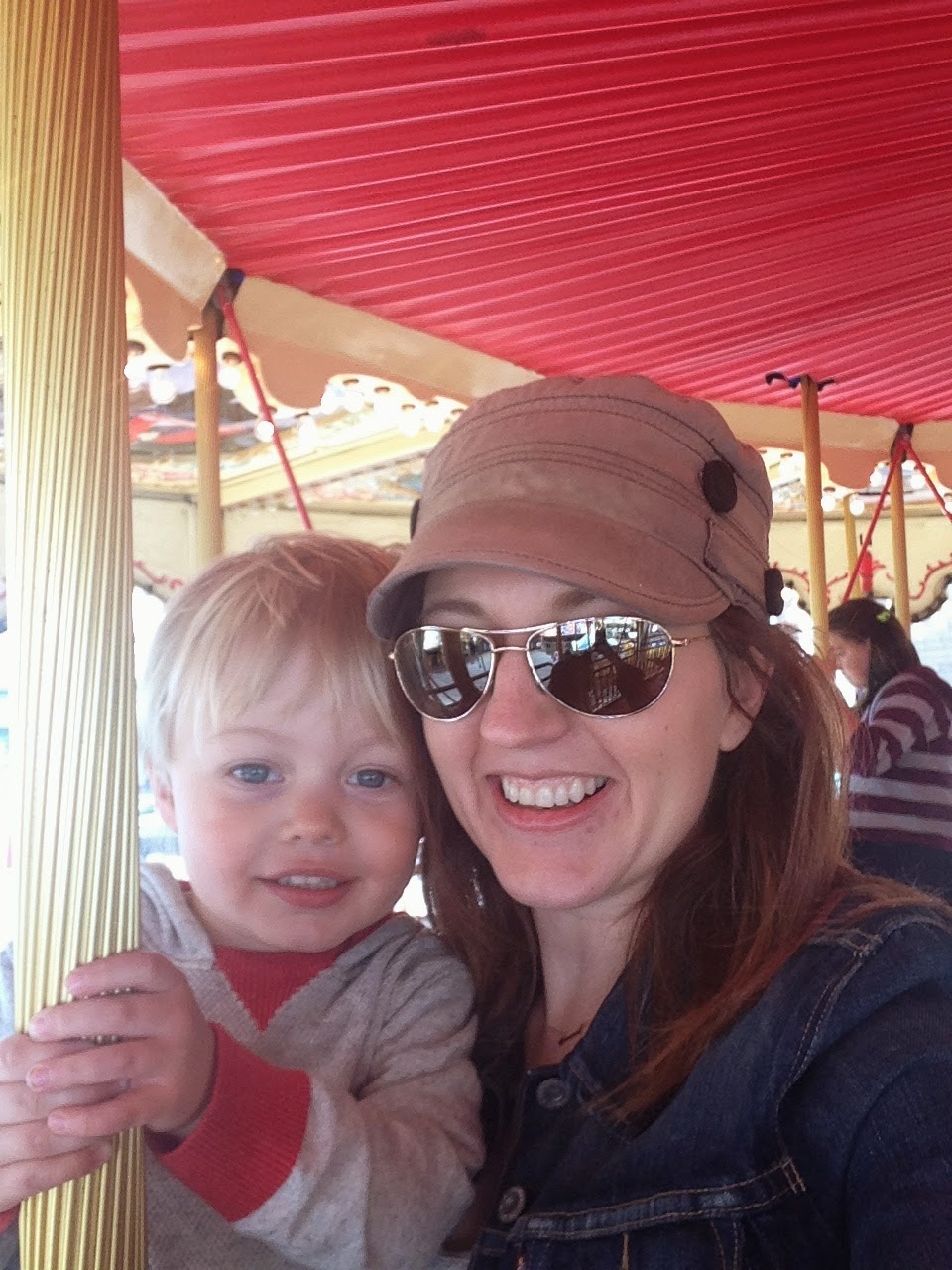 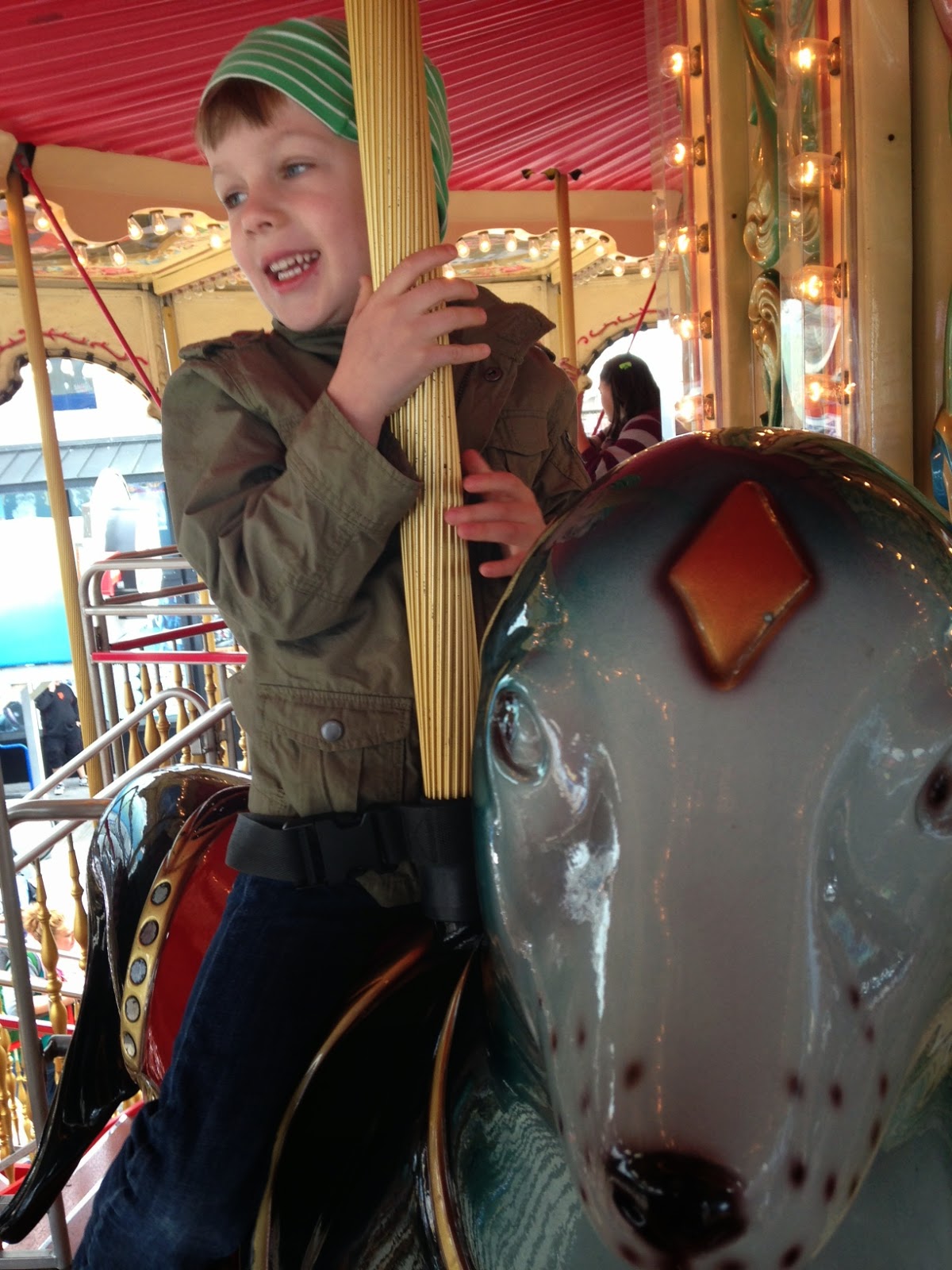 The highlight of Pier 39 though was warm, sugary & circular in shape. We were told that we had to try the donuts if we went down there and we had to make sure they were nice and warm. They did not disappoint--Kaden, Logan and I polished off two dozen fairly quickly. 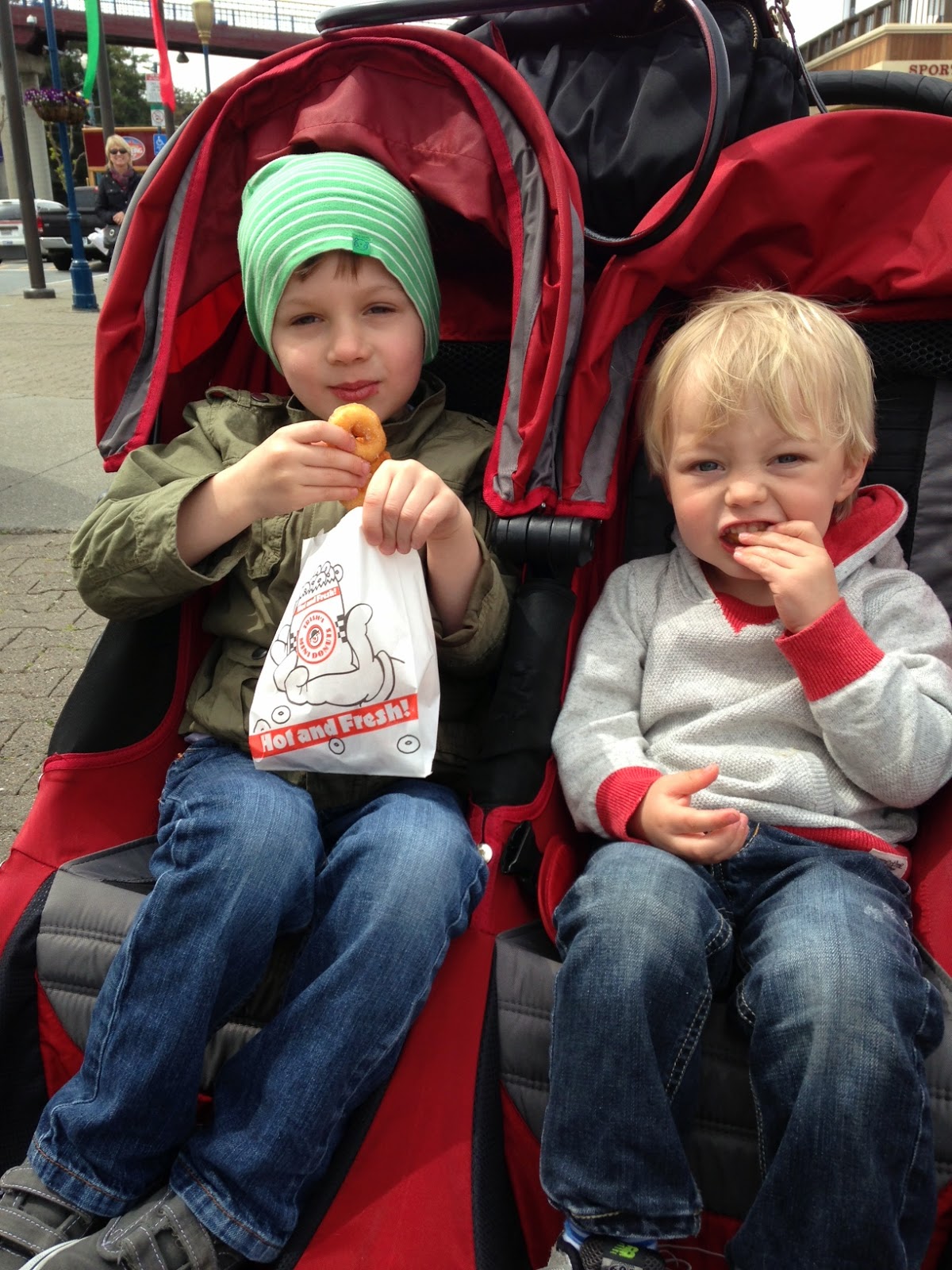 I wasn't the only one they put into a coma but at least this guy could give into it and enjoy the ride back to the hotel. The San Francisco Bay was fun but the warmer weather of the inland was calling and family was waiting. 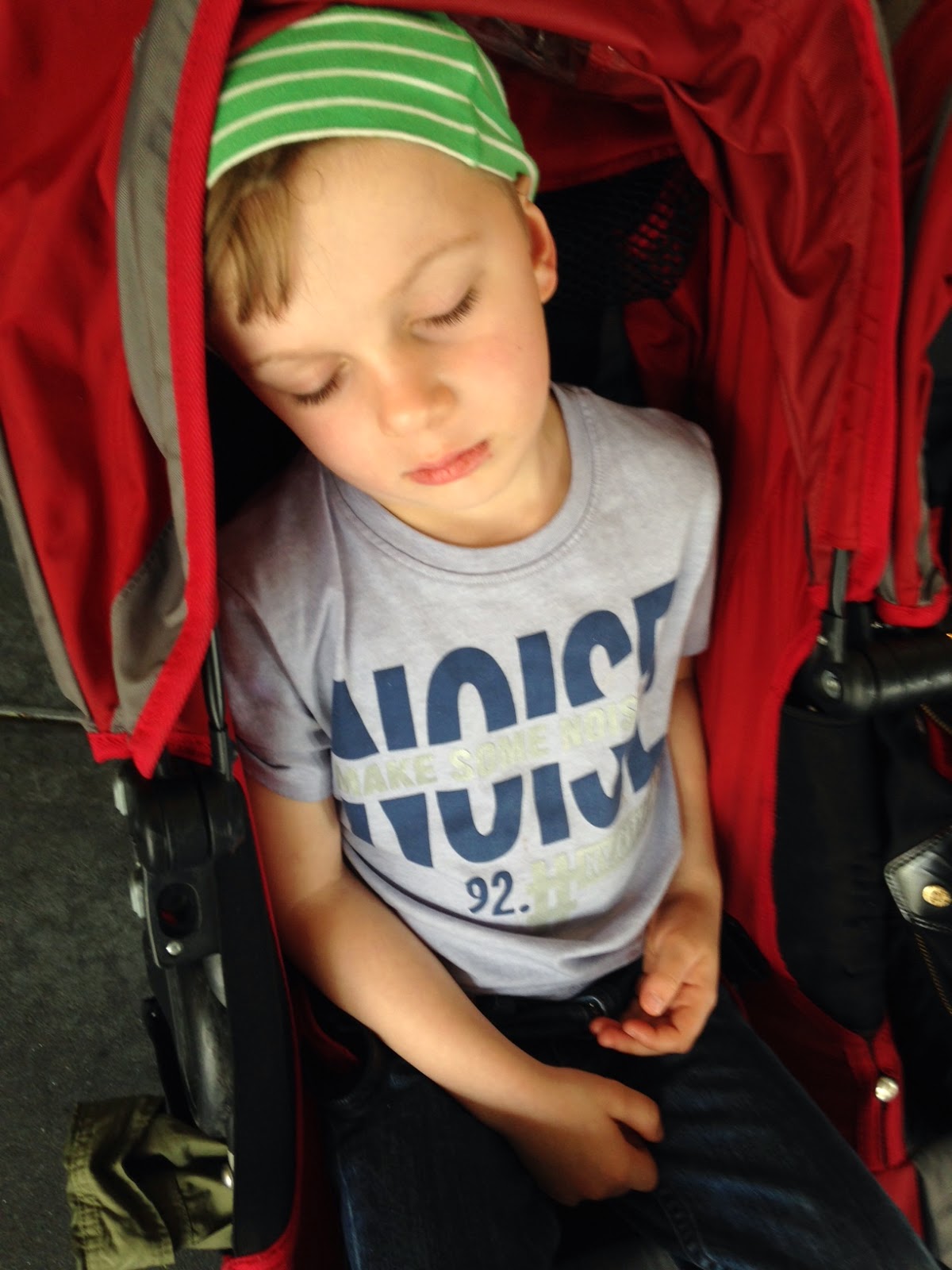