These past 7 days have been quite the ride. What started last weekend with a slightly off Logan turned into a whole lot more. In my last post I mentioned I had taken him to Children's Mercy Urgent Care last Sunday and he was diagnosed with pneumonia, a double-ear infection and was running 102 temp. We came home with instructions to take amoxicillin for the next 10 days so that is what we were going to do. & on Monday, things were looking brighter-he was actually smiling after he woke up from his nap. Big improvement & he went back to daycare on Tuesday.

Fast forward to Wednesday morning. Kaden wakes up coughing non-stop--literally didn't stop coughing from 6:30-10:30. I decided that he needed to be seen & thought it might make sense for Logan to have a check-up, make sure that pneumonia was making its way out. So we walked into our pediatrician's office & about 30 minutes into the appointment both boys were getting treatments. 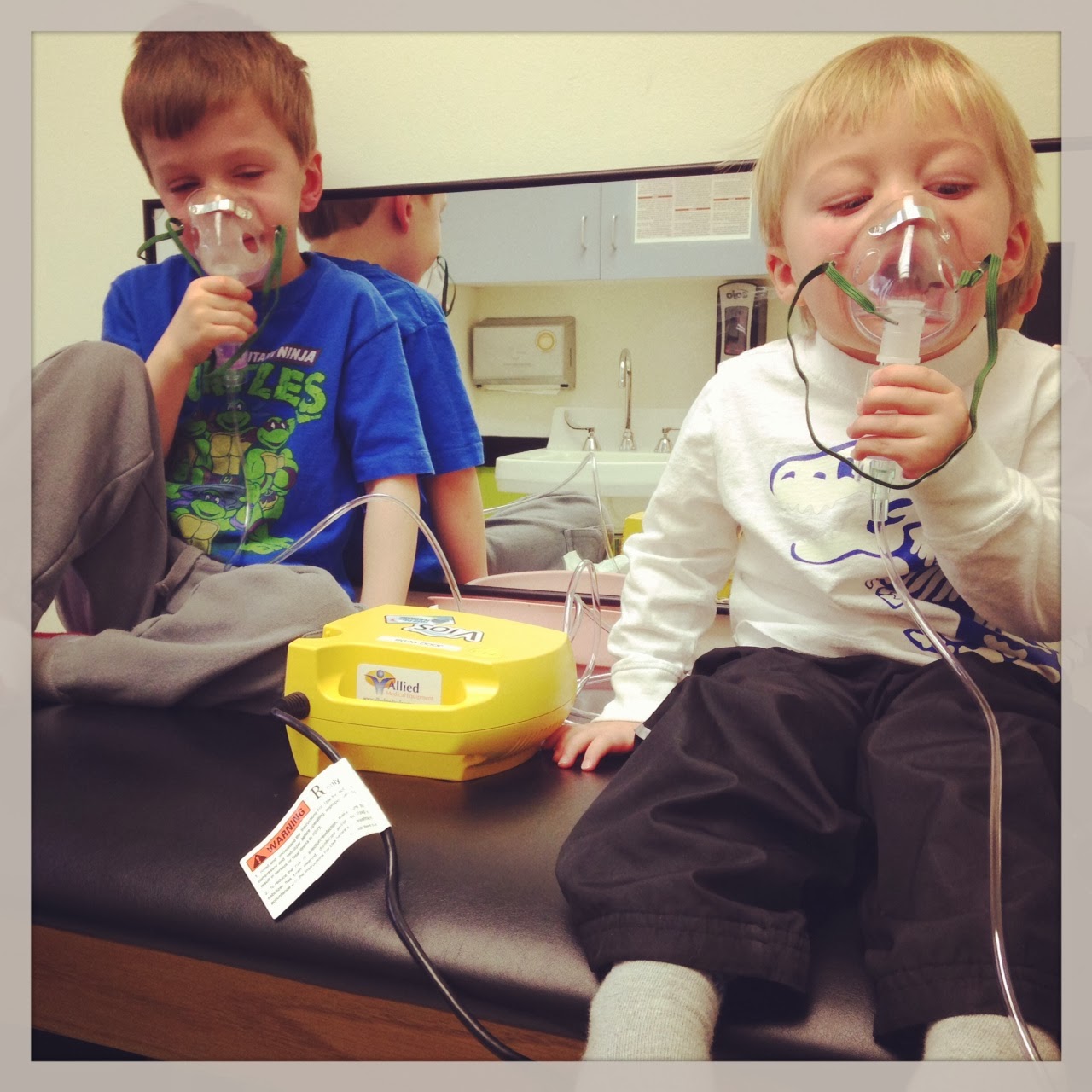 Logan was not doing better, in fact, he was wheezing A LOT. Kaden, well he was another story, we couldn't get it to stop & left with strict instructions that if his coughing wasn't better in a day we were to be back there & asking for a chest x-ray. We walked out of there with 7 prescriptions. Both boys were officially on steroids, amoxicillin & breathing treatments for three times a day until the cough is gone plus three more days. 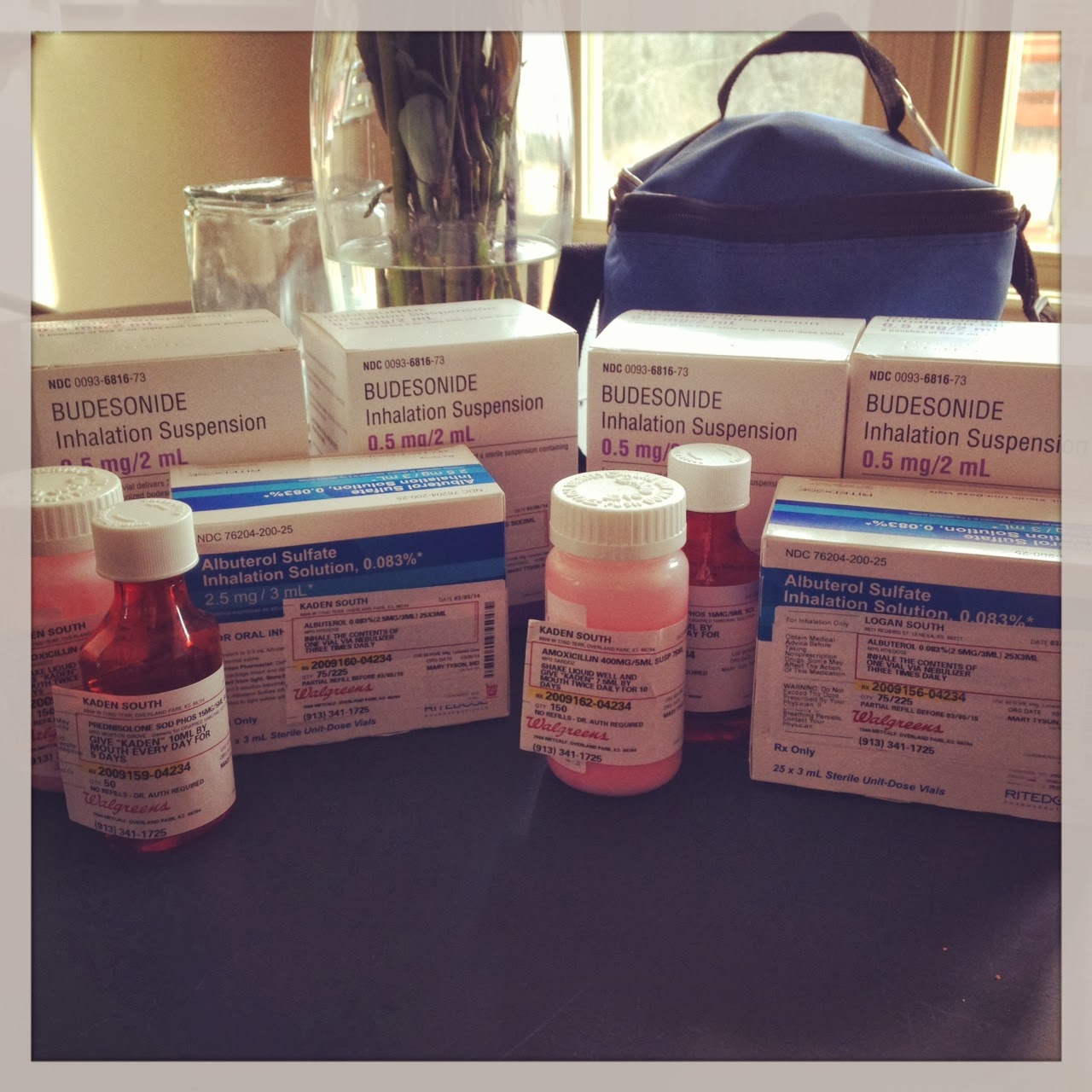 & the steroids. WOW. They sure did their job. The boys started perking up thanks to those steroids but the steroids also made them so very hyper. It was not easy trying to keep these two boys from running circles around the house--they just don't get that running around = coughing like crazy! Long days was an understatement.

Justin was able to stay home with them on Thursday and Friday they finally got to go back to daycare and back to pre-school. They were so happy to be out of the house but weren't that happy with me when I told them no outside play. The weather was beautiful but it was this sort of weather that got them there in the first place & no outside play has continued through the weekend. & even though we had a lot of this… 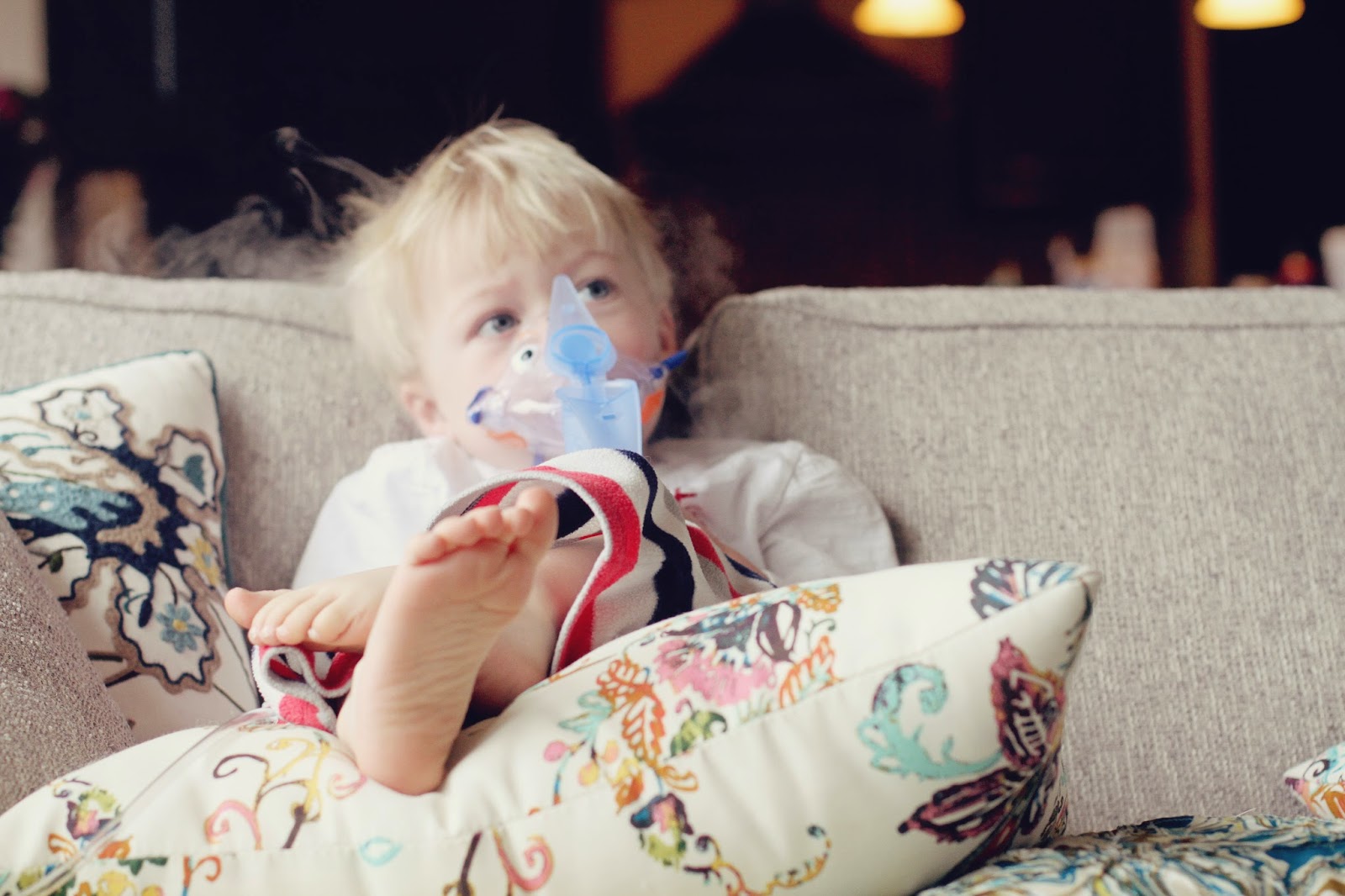 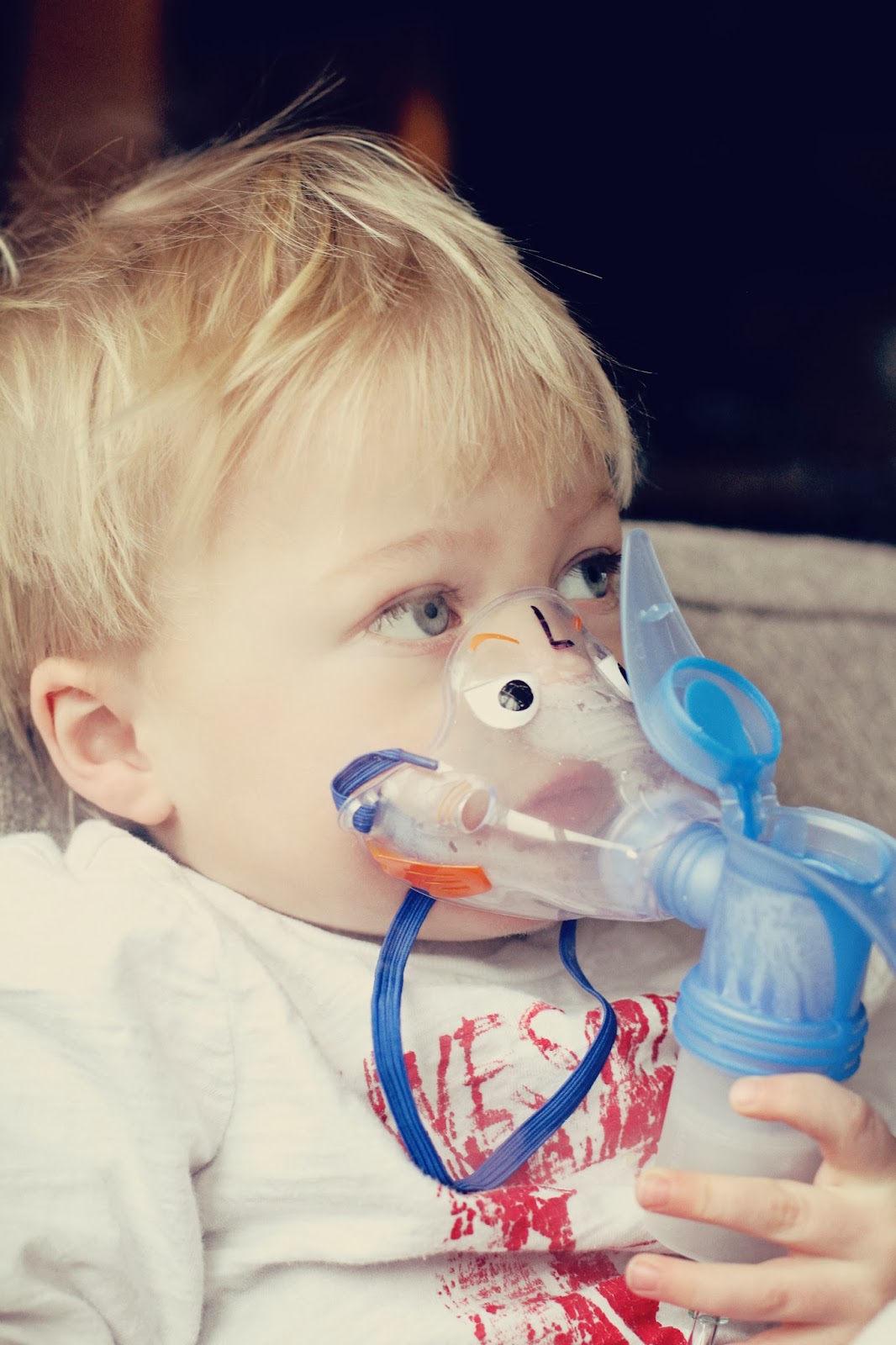 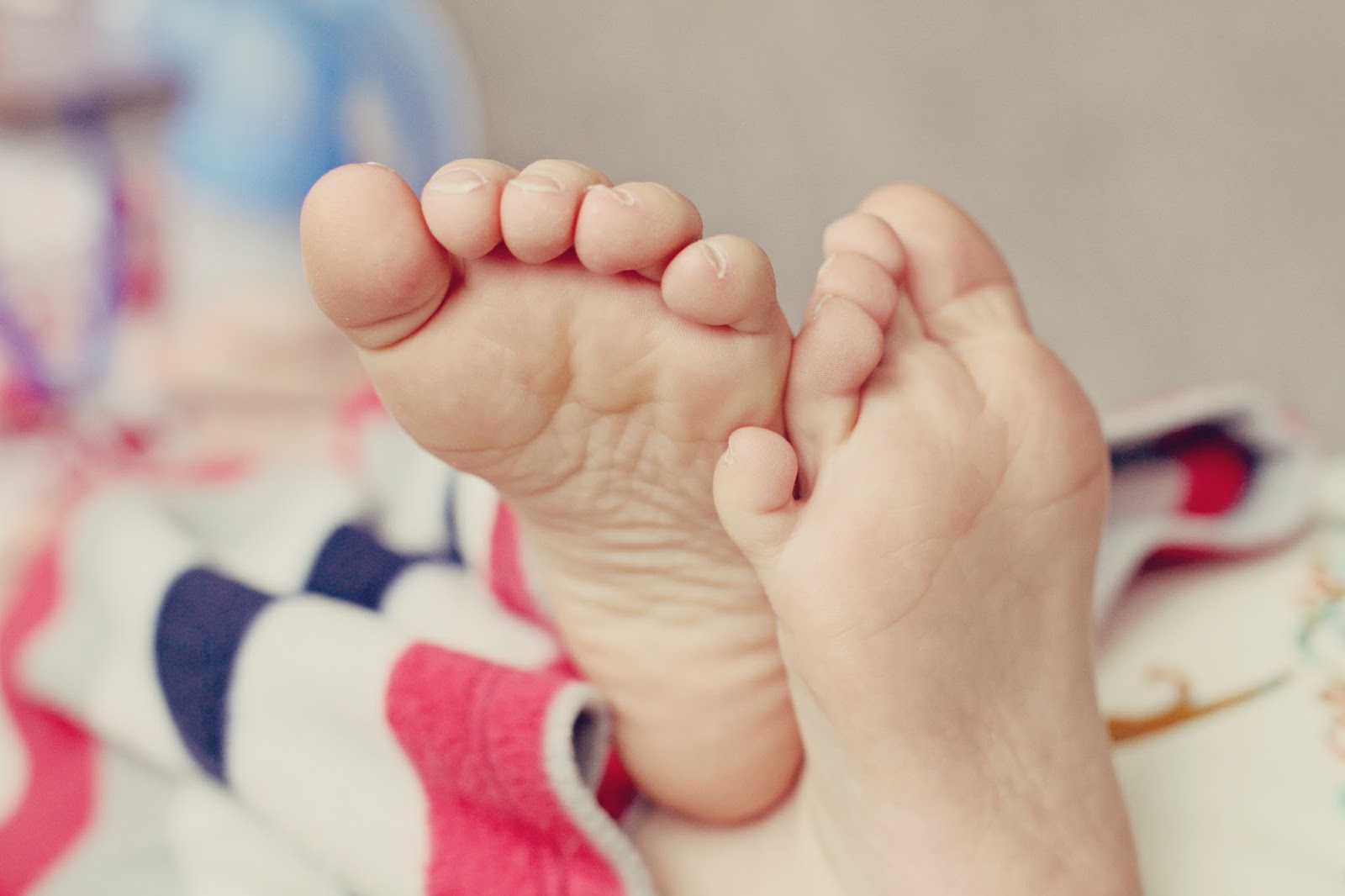 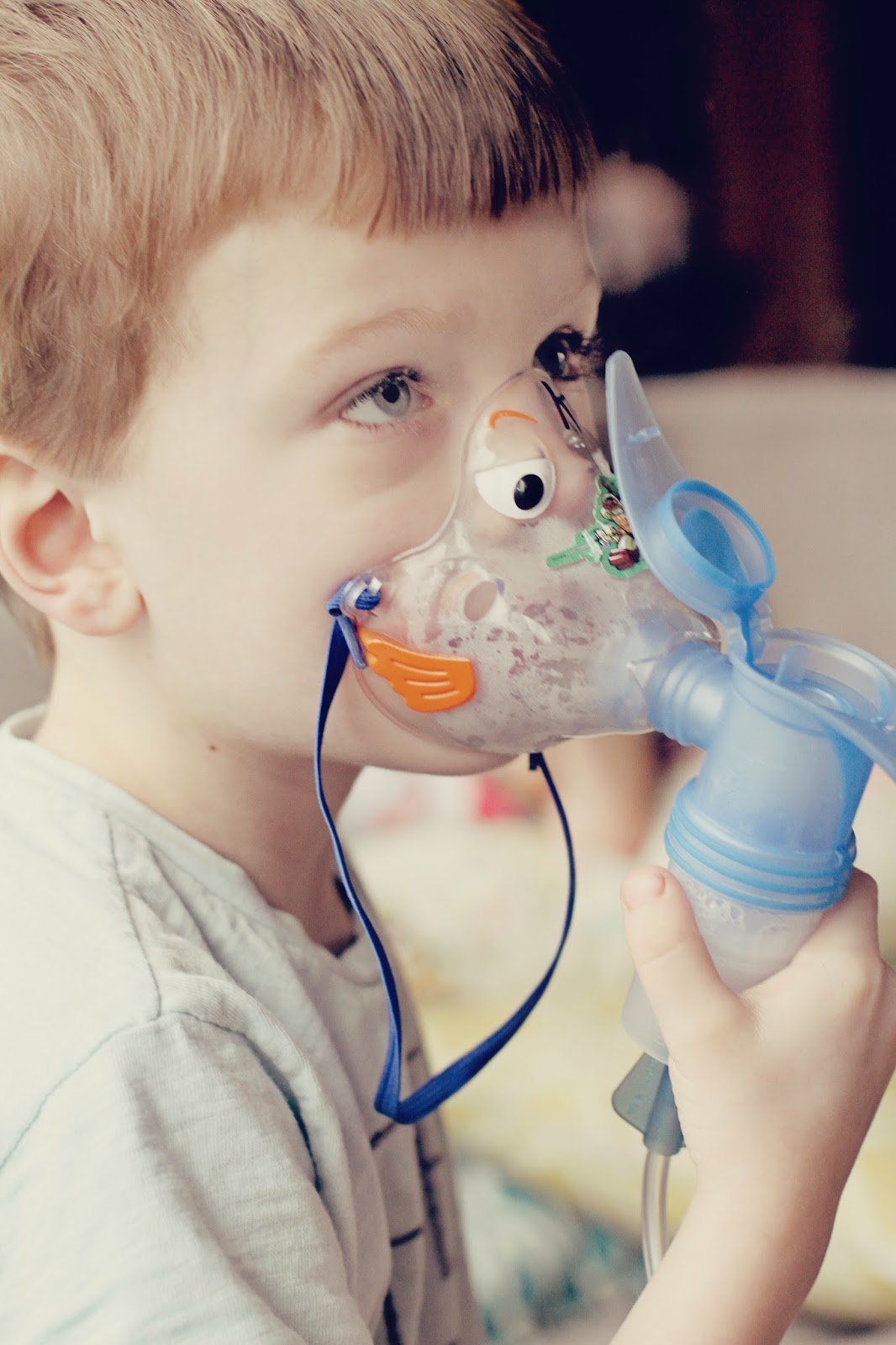 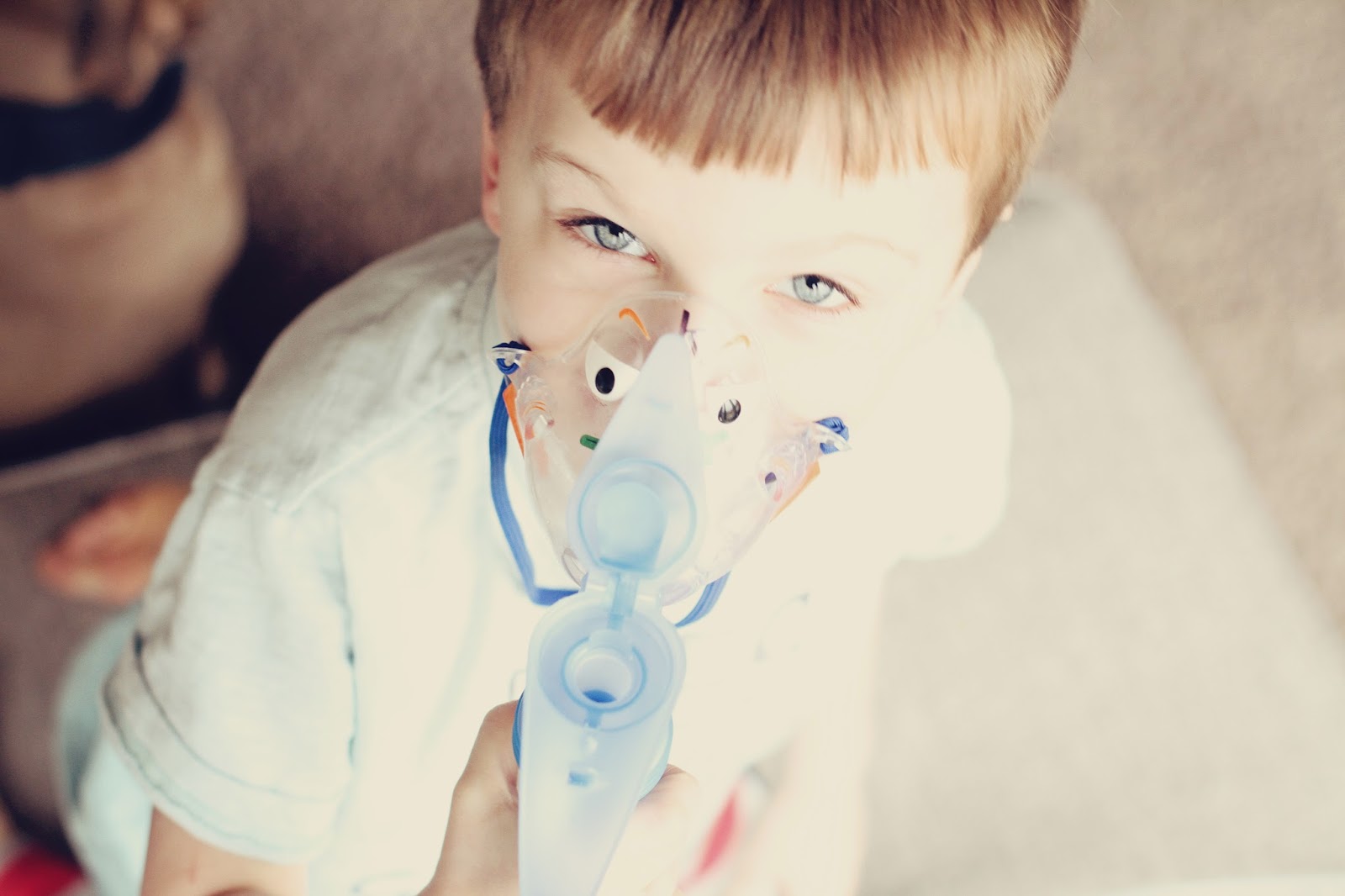 We also had some fun. The boys and I had a little Saturday morning date. We ran errands--Goodwill to drop off bags and bags of their baby clothes & Home Depot to pick up some very BLUEBERRY paint for a little weekend project. & since we weren't planning on going outside this weekend I told them we could make a special stop at Target and they could pick out a new toy. There were a few rules--under $10 and if I said, no, it meant no. You see, the boys don't get to go and pick out toys, EVER. I know, call me a mean MOM but I don't want them to think that every time they go to the store, they get something. I worry about my kids growing up being spoiled brats & don't get me wrong, they are spoiled, with a capital S but I don't want them knowing it.

Kaden found a Superman on a motorcycle and luckily, Batman was sitting right behind him. We were good to go.

& then, I took them to lunch, compliments of their Aunt Dawn & Uncle Nolan. We were headed to the train place & thankfully we got there before everyone else did. My boys have a fondness for this place we call Fritzs and not just because they get to watch trains deliver their food but because they happily announce to those who are around us that "my Papa Tom drives a train." It may have been the cutest thing EVER. Just sad Papa Tom & Grandma Sara didn't get to see or hear it. 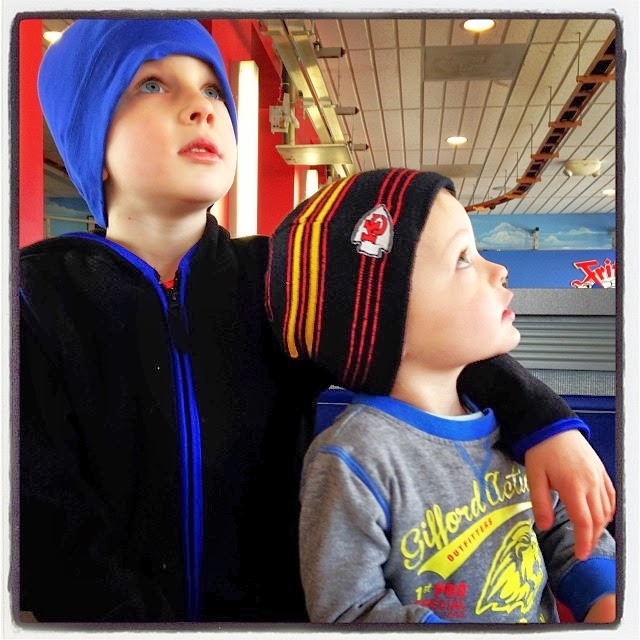 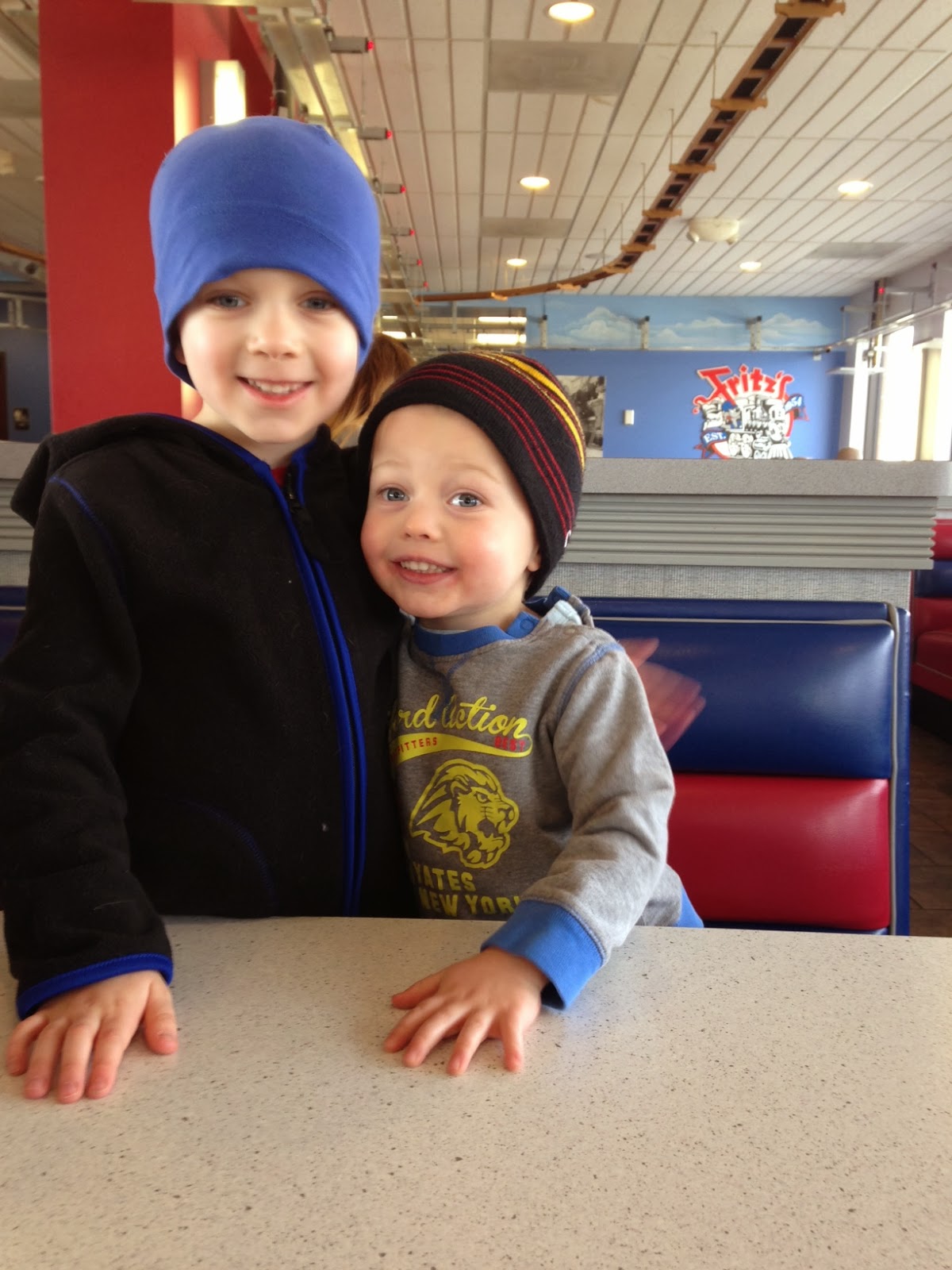 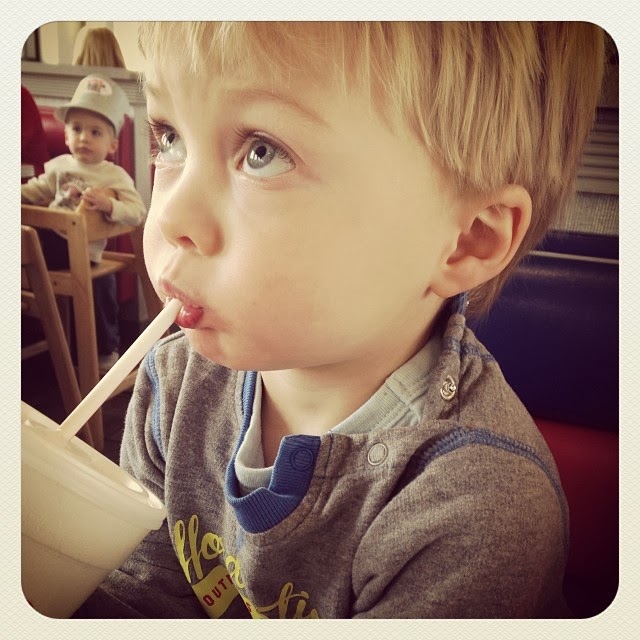 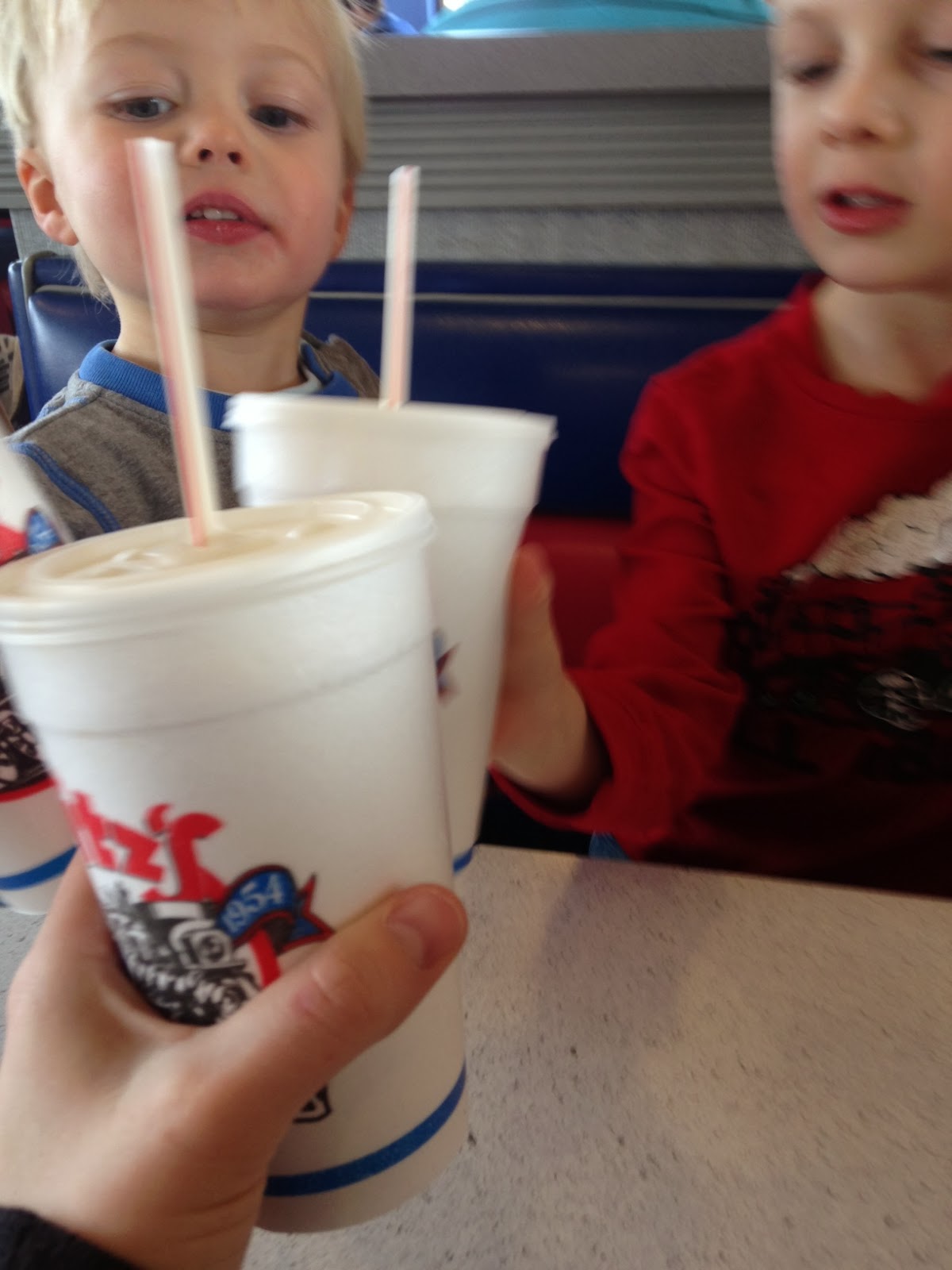 The boys have a thing for "cheers-ing" & I couldn't think of a better thing to be toasting to than to them feeling better. But don't let better fool you, we're not stopping these meds until they are 100% gone.

& trust me, its bad, so bad the pharmacy couldn't fill their prescriptions, I had to go back for four more boxes of albuterol. So many little ones are sick right now & all I can say, trust your instincts & its better safe than sorry. I will happily pay a co-pay any day of the week for the doctor to tell me my kid is PERFECTLY fine and to stop worrying--much better than trying to analyze it myself and hoping it passes. & yes, I am okay being "THAT" mom who takes their kids in to see the doctor as soon as they mention an ear hurting or I hear a cough that remotely sounds off. We will not be taking anymore chances this season.

And after a week like they had, we decided to end it with a well-deserved trip to Chuck E Cheese. We figured that since the kids were still on antibiotics & I had a never-ending supply of anti-bacterial gel, we should be good for a few hours. Again, we didn't want the kids outside, even though it was BEAUTIFUL. Being outside is code for RUNNING, JUMPING, & CHASING for two little boys I know & that would be far worse than a little time at Chuck E. Cheese & the kids were soooo excited about going that they completely forgot about how AMAZING it was outside today. & it was just a coincidence that the boys showed up in almost identical shirts as Nathan, we just got the colors wrong! (I figured if both boys were wearing the same shirt, they would be easier to spot---they have a spend a token and come back to the table rule at this place---and we are strategically placed in the middle of the little kid stuff.) 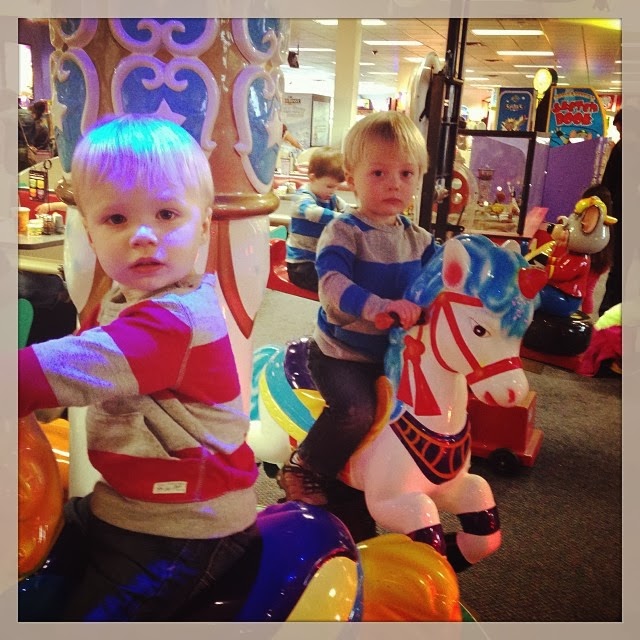 Two things. The boys were smiling the entire time except for this picture & when we told them it was time to go. & somehow Kaden managed to photo-bomb Nathan and Logan's picture.

& you know the best thing about this weekend. Besides one little, easy-peasy, photo-shoot, I didn't have a dang thing planned. This was one of the first weekends since I made the announcement of hanging up my photography hat to spend more time with my family that I have actually been able to do just that & it was sooo great for the soul. It was exactly what I needed, what we needed & I can't wait to have more weekends just like this one. Only they will include more sunshine & getting to feel that same sunshine on our faces.