We enrolled Kaden into Pre-school back in November, we (Ms. Brenda, Justin and I) thought it might be best to get him into more of a classroom atmosphere and around kids his own age for at least a couple days of the week.

& it has been. Kaden not only has enjoyed being with more kids and going to "school" but its been good for both boys because they have this time to spend apart. If not for these 3 hours, two days a week, you can about bet that the rest of their time is spent side by side. They do everything at this point together which is fine, but having a little time away from one another is a good thing too.

Each morning we drop off Kaden at school Logan gets to go in as well. We walk Kaden to his room, he puts his coat and tote bag up & then he gives both Logan and I a great big hug good-bye. After Kaden heads off with his buddies, Logan and I proceed to Grammy's room to say our bi-weekly good morning. & since today was Valentine's Day, Logan brought Grammy some flowers. The big kids think Lil Logie is pretty cool but Logie isn't quite sure what to think of the big kids.

After we said our good morning to Grammy, I took Logan to Ms. Brenda's & when we walked in we were greeted with a full on Valentine's Day party there too. These boys were about to have one very special day. I quickly ran into work to get a few things done and then hopped back in the car to try and catch Kaden's party. I arrived just as they were lining up to head down to the cafeteria & Kaden was pretty surprised to see me there--I hadn't told him I was coming. As I was watching him sit so very quietly until his name was called to line up I noticed he was sitting by a pretty blonde, that had to be Sophia. Every time I have picked Kaden up over the last month he has proceeded to tell me that Sophia wasn't there that day and so he played with someone else but that he missed her a lot. Well, today he finally got to see her & luckily I was able to confirm that she talks just as much about Kaden as Kaden does her. 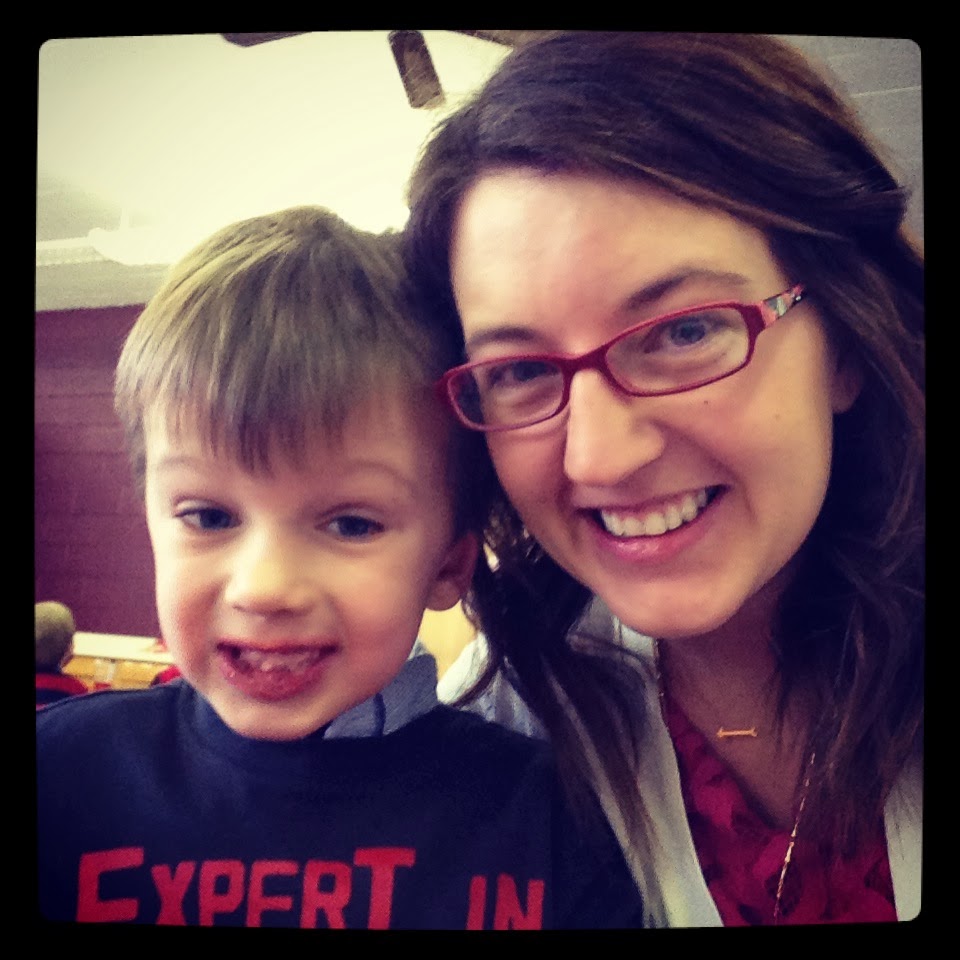 I am amazed by Kaden's teachers just as I have been in awe of Ms. Brenda over the last few years. These ladies have such a gift. They are able to get 45+ 3, 4 & 5 year olds all to quiet down at one time and to listen & follow directions. These kids decorated their sacks. They played pass the sack & each got a cool little prize & then while half of them got snacks, the other half handed, well dropped in, their Valentines. 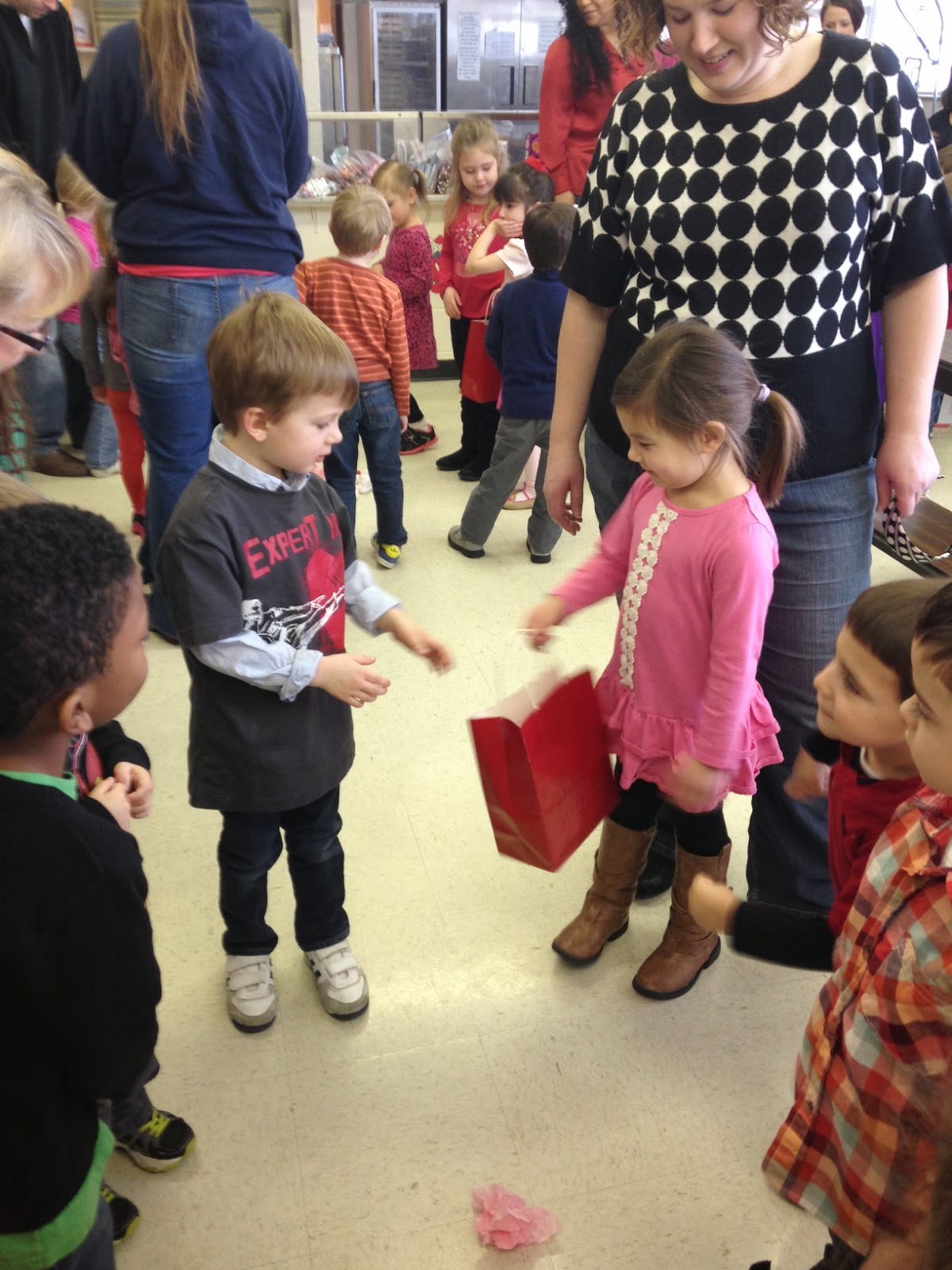 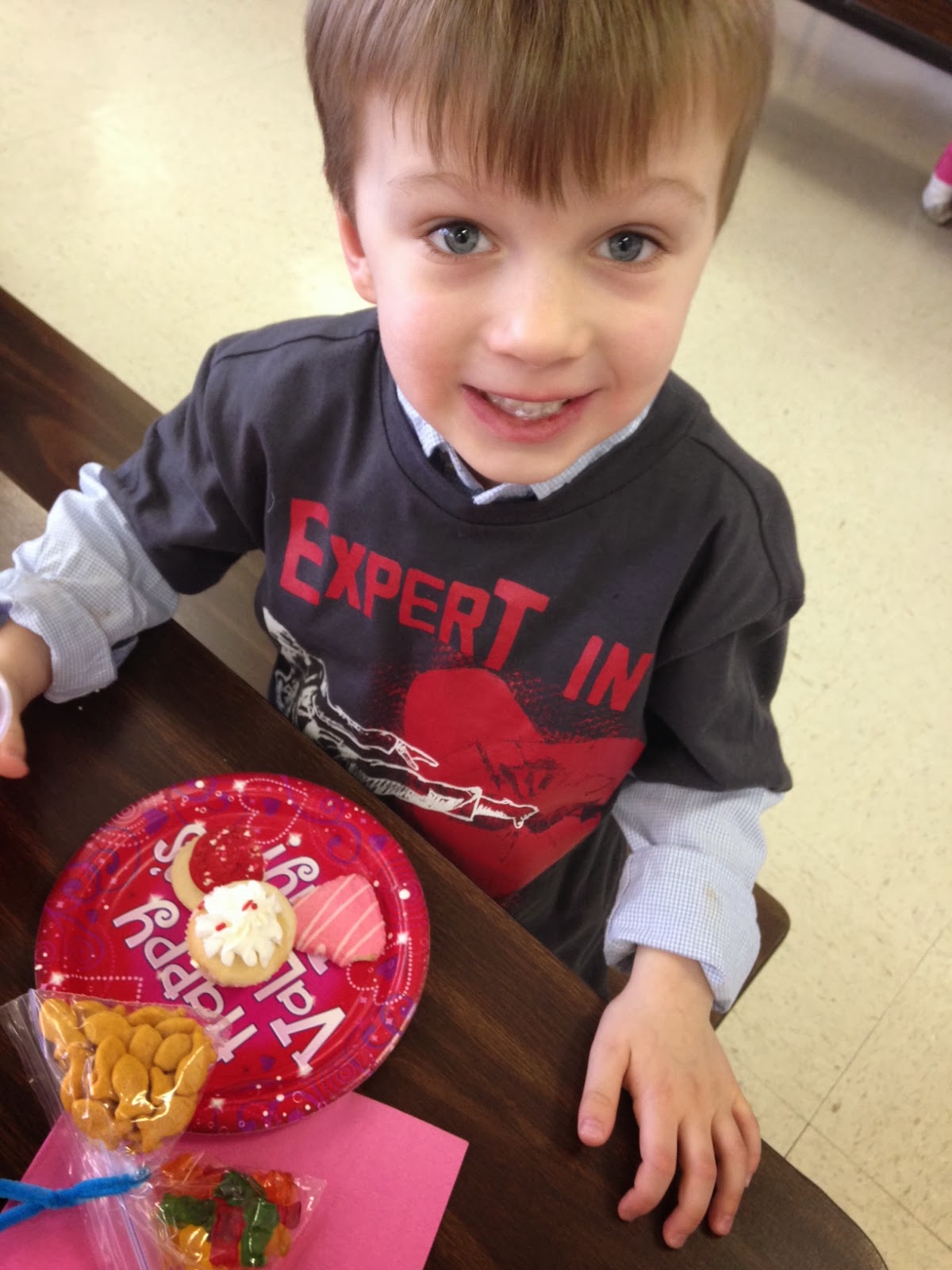 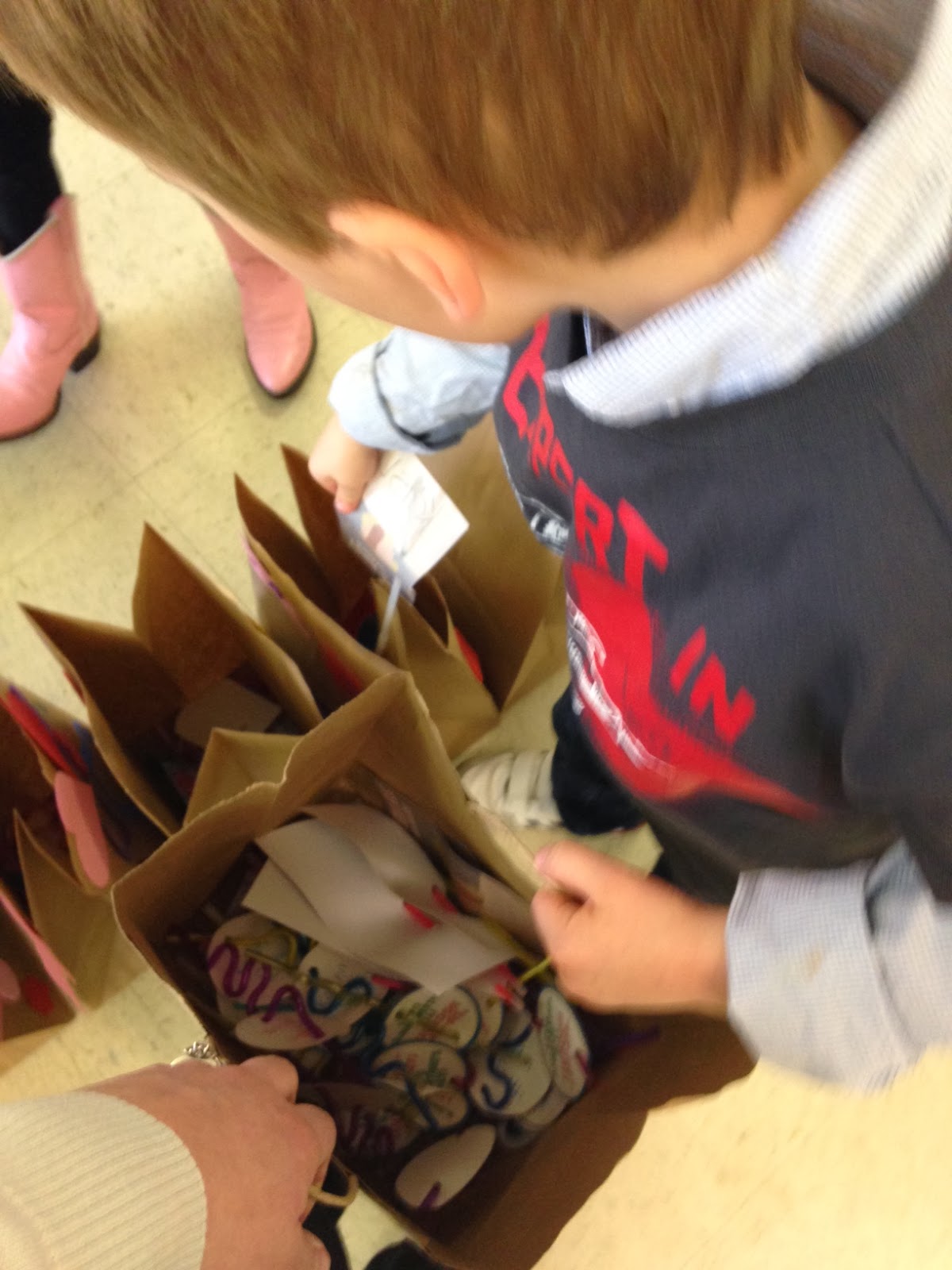 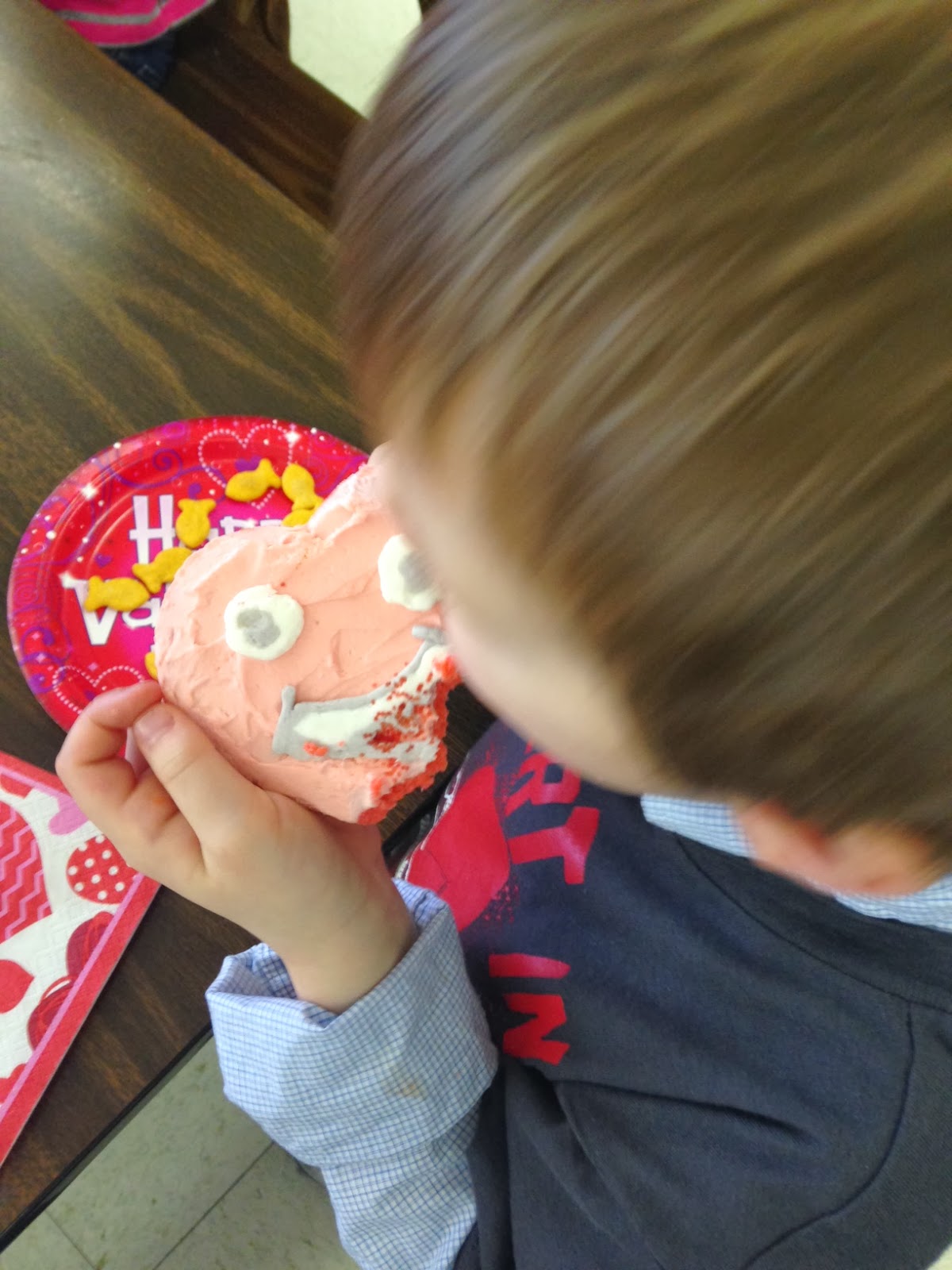 Of course he had to finish the party off with another cookie. The kid was officially on a sugar high & I was pretty high on life watching him interact with the other kids and his teachers. It almost makes me want to send him to Kindergarden this next year because I know he could do it but we have decided that since he is an August 31st birthday and the cut-off is on September 1st that we will wait another year. We will send him the year that he turns 6, not only will be one of the oldest but he should easily be one of the biggest too. & I know, its hard to believe that little old me at 5 foot 4 inches is talking about having one of the BIGGER kids--have you met my dad at 6'2", my brother at 6'1" and my sister at 5'11" oh and don't forget my 16 year old nephew who is easily 6'1". Somehow I just managed to get skipped over in the good ole height department.

Once his school party was over I dropped him off at Ms. Brenda's where he walked in during activity time. Luckily she had an extra spot for him all ready to go. The games continued. The candy continued. The sharing of Valentines continued. These boys are so very luckily to have so many wonderful family and friends who love them so much in their life. First Christmas and now Valentine's Day, they're going to think they get gifts every month if this doesn't slow down!

On a separate note, we are talking about allowances around here. When to start and how to implement it. Do you just give them allowance that isn't tied to any chores and for just being part of the family where they can earn more for chores they do or do you tie it to chores. We are thinking maybe a $1 per week multiplied by their age & giving them 3 jars--Save, Give, Live. Not sure thats exactly how it will all work out but I know its time to teach them the value of a $1 & to stop buying toys for them.