This past weekend the boys and I loaded up & headed back to Grandma Sara's & Papa Tom's. We had a pretty important reason to be in town but I won't be discussing why…

BUT, I will talk about our Saturday and how amazing the weather was when we arrived. When we left KC on Saturday around noon it was about 60 out but when we pulled into my parent's drive two hours later, it was a breezy 70---fresh air never felt or smelled so good. I have had some of the worst seasonal depression as of late, so much so that I was fully prepared to pull the trigger on a last minute Disney Cruise for the family but my logical and much smarter husband said we should wait, we have enough on the calendar this year. He was right but guess who has the trip almost planned for next year--this girl! 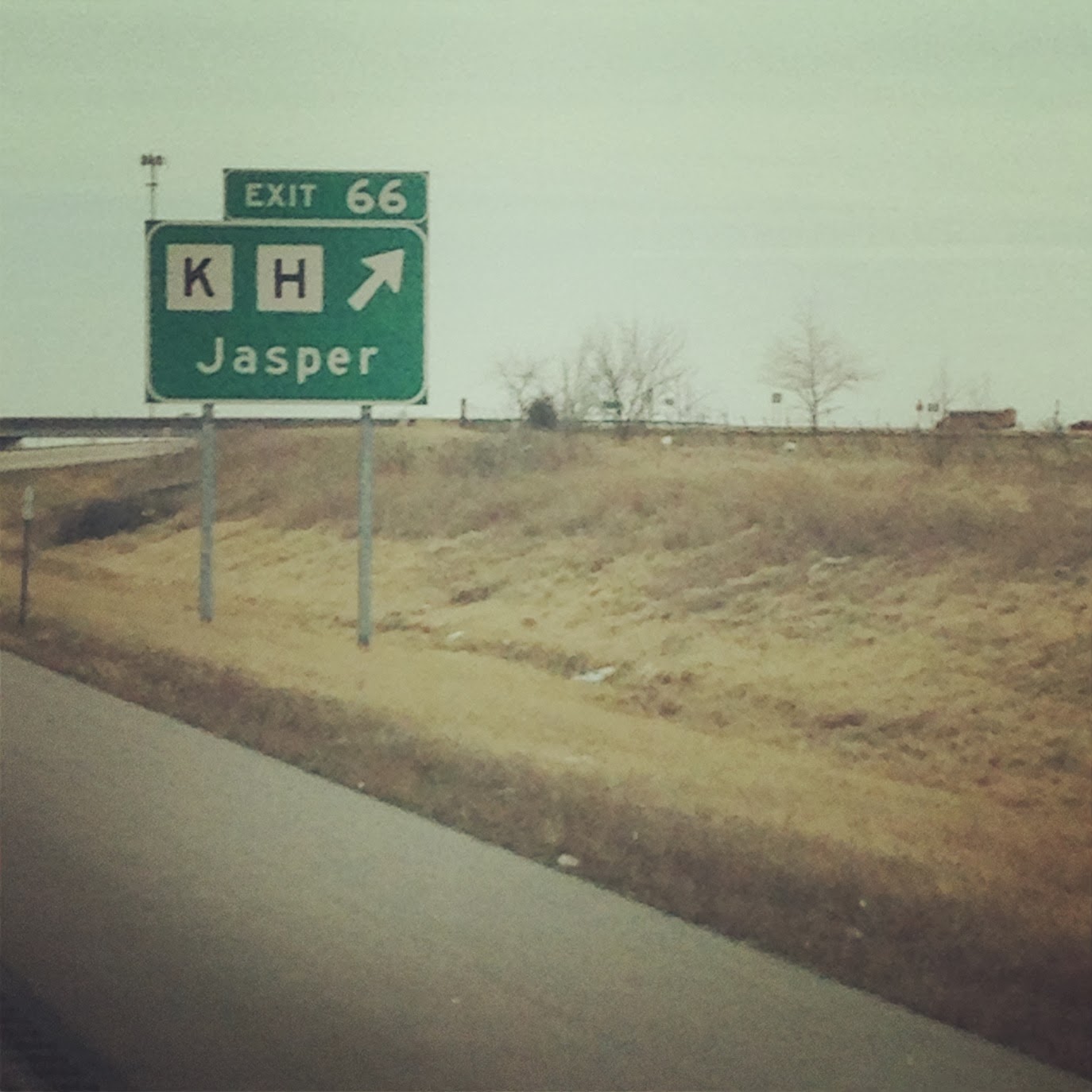 As soon as we pulled up the boys were begging to get out of the car & I barely got it stopped before Kaden was opening the door (just a figure of speech--he isn't allowed to unbuckle until the car is off). My dad was working in the garage & my mom in the yard. They both dropped what they were doing and made their way to the Yukon. Each boy had already decided that they didn't want me to help them out, they wanted Papa and Grandma. Once the boys were in their arms Papa and Grandma told them they had a little surprise for them.

GLOVES. Little did they know the boys are OBSESSED with gloves. They had hit the jackpot & these little boys didn't taken them off all weekend, Logan even napped in them. & Kaden took them to show & tell on Tuesday at pre-school. 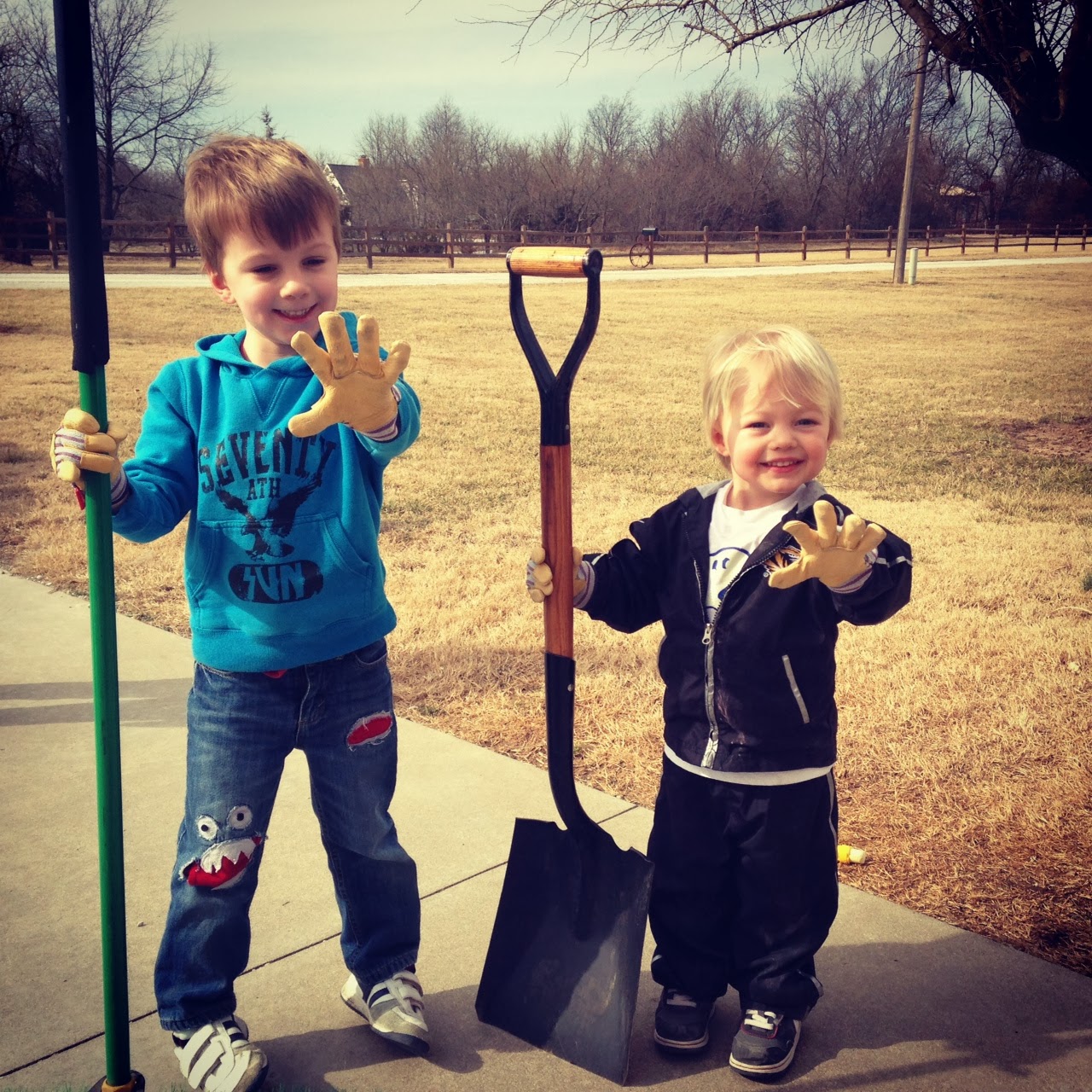 & the next few hours the boys were put to work but to them it wasn't work at all, it was fun. They helped Papa Tom split wood--well Papa Tom split the wood, Kaden and Logan loaded it. 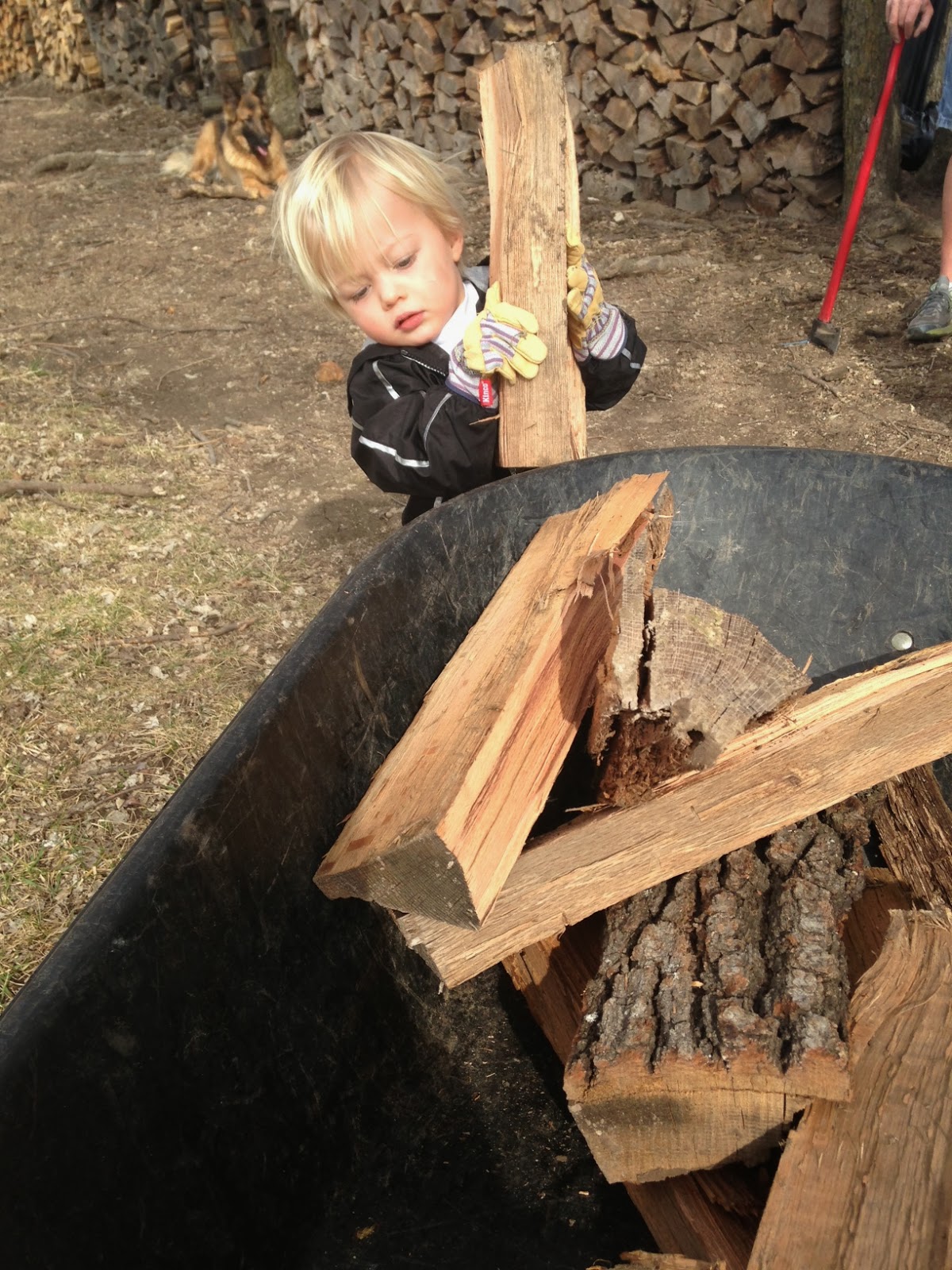 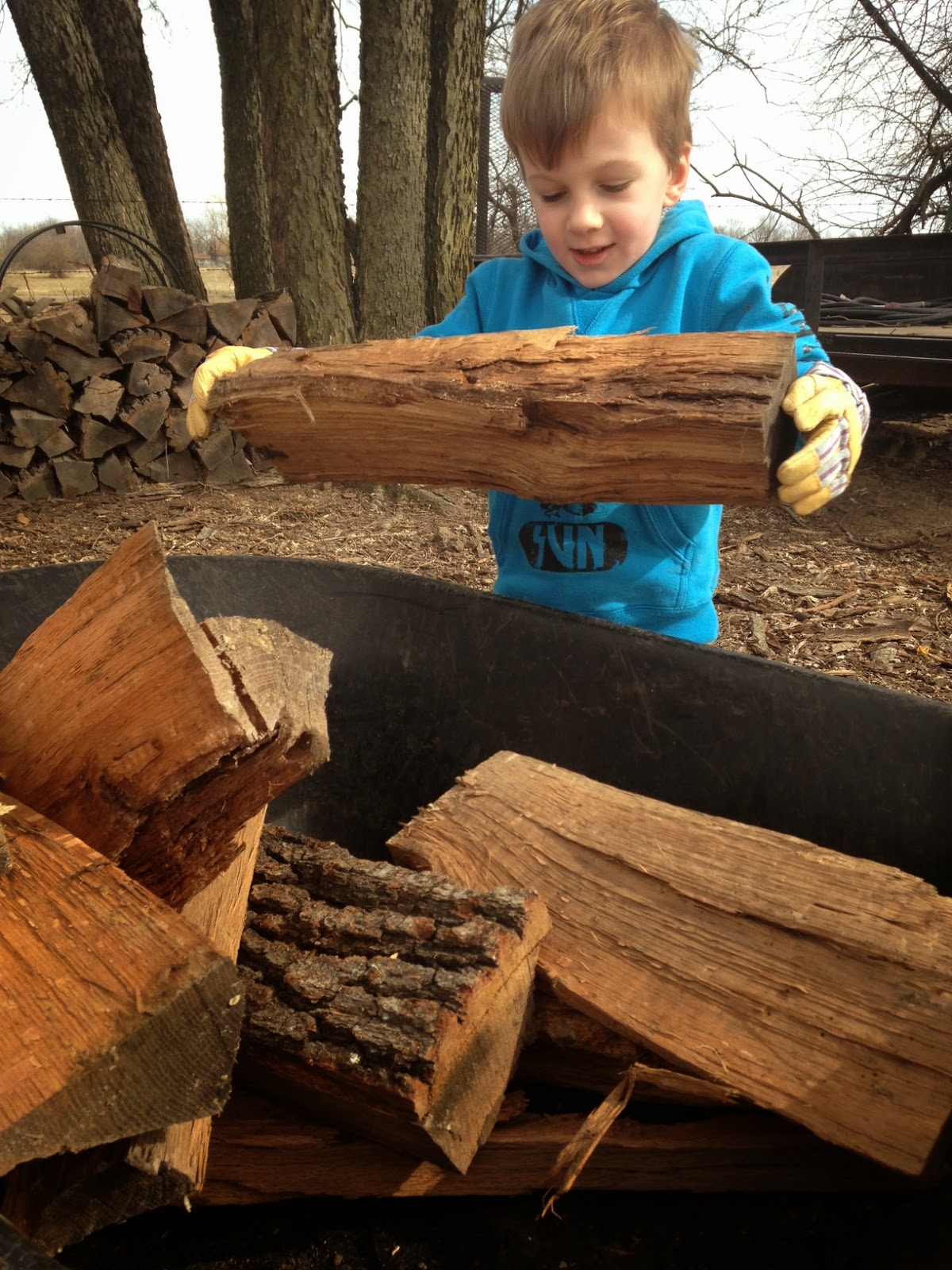 & of course Kaden had to help Papa move the wood up to the house so that Grandma didn't have to walk out in the cold to get some wood for the fire. What a great helper he was. 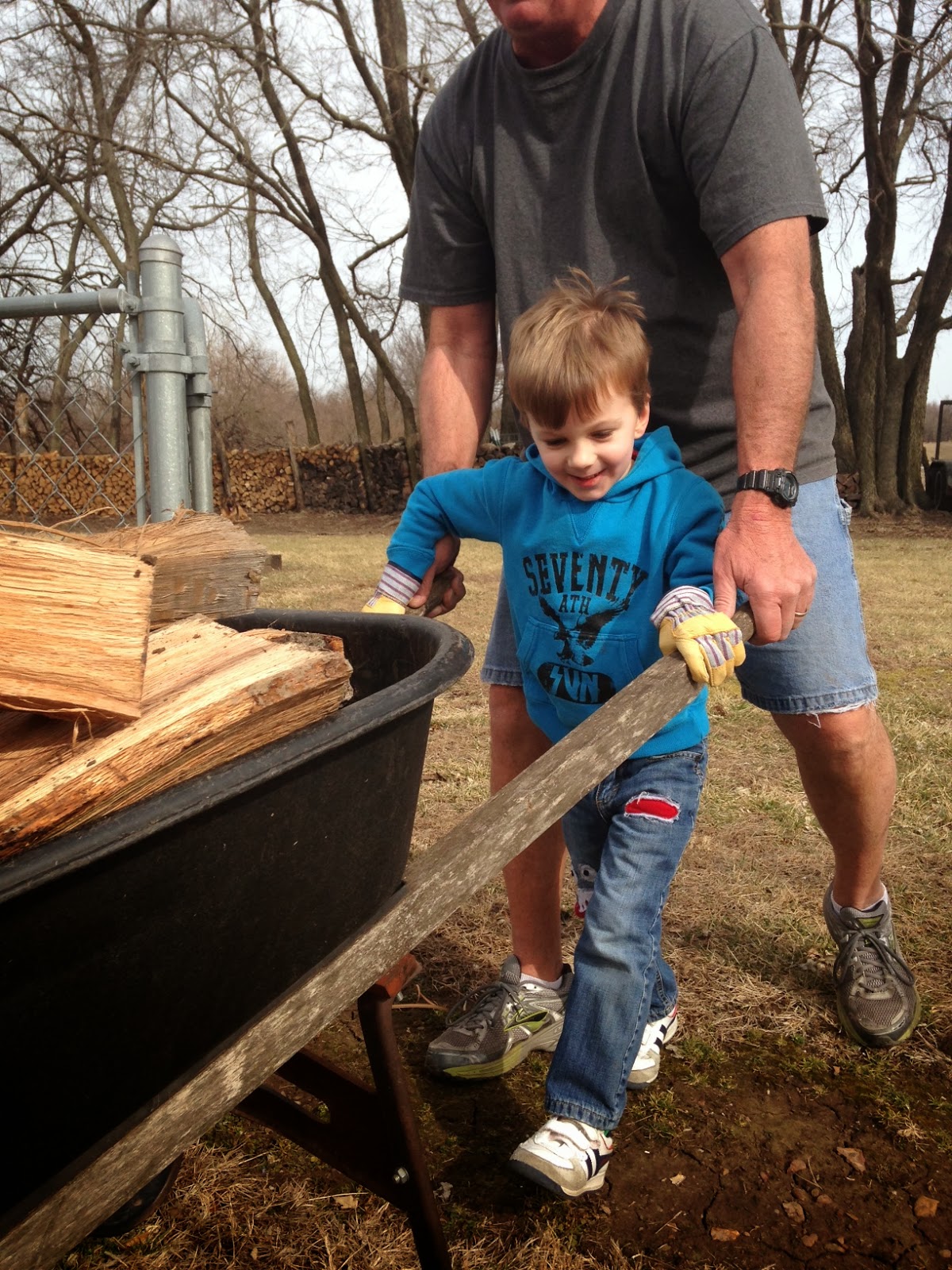 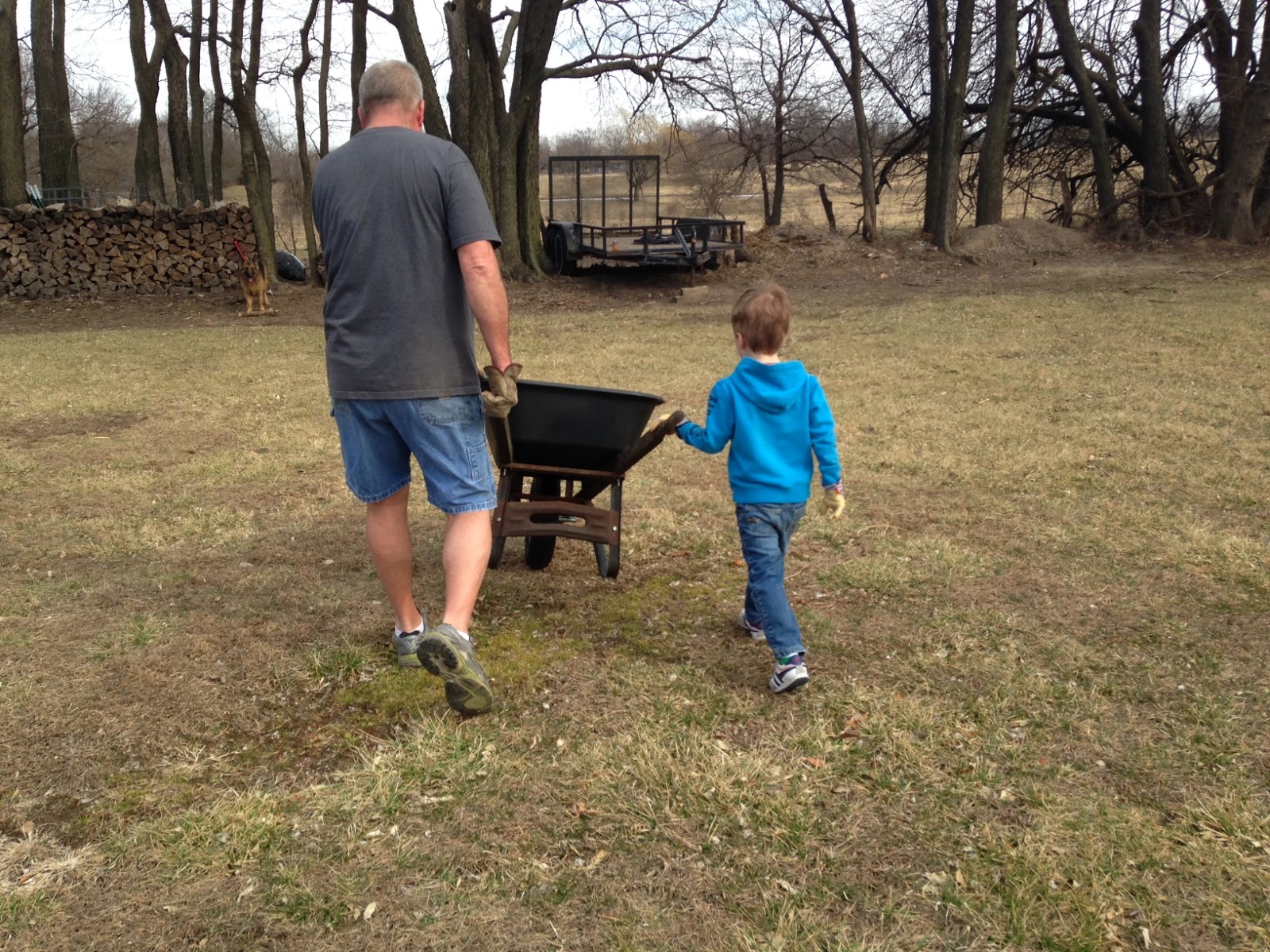 and he even became a waiter for Papa Tom. & yes, I know he is carrying a beer but he was excited that Papa Tom asked him to go and get something & I can't say no to Papa Tom. However, I can assure you that this will only happen at Papa Tom's house, he will not become the beer fetcher at the South house! 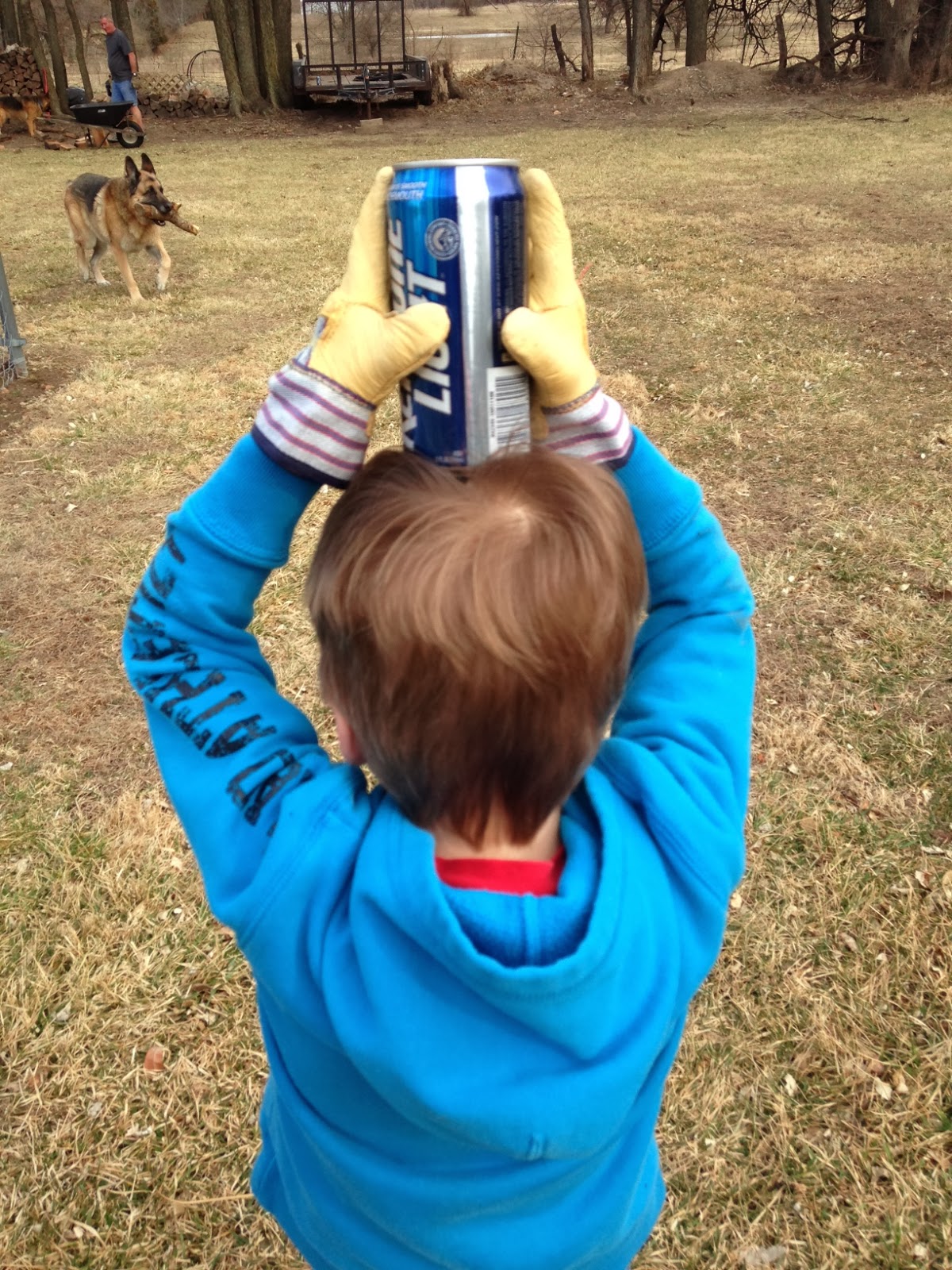 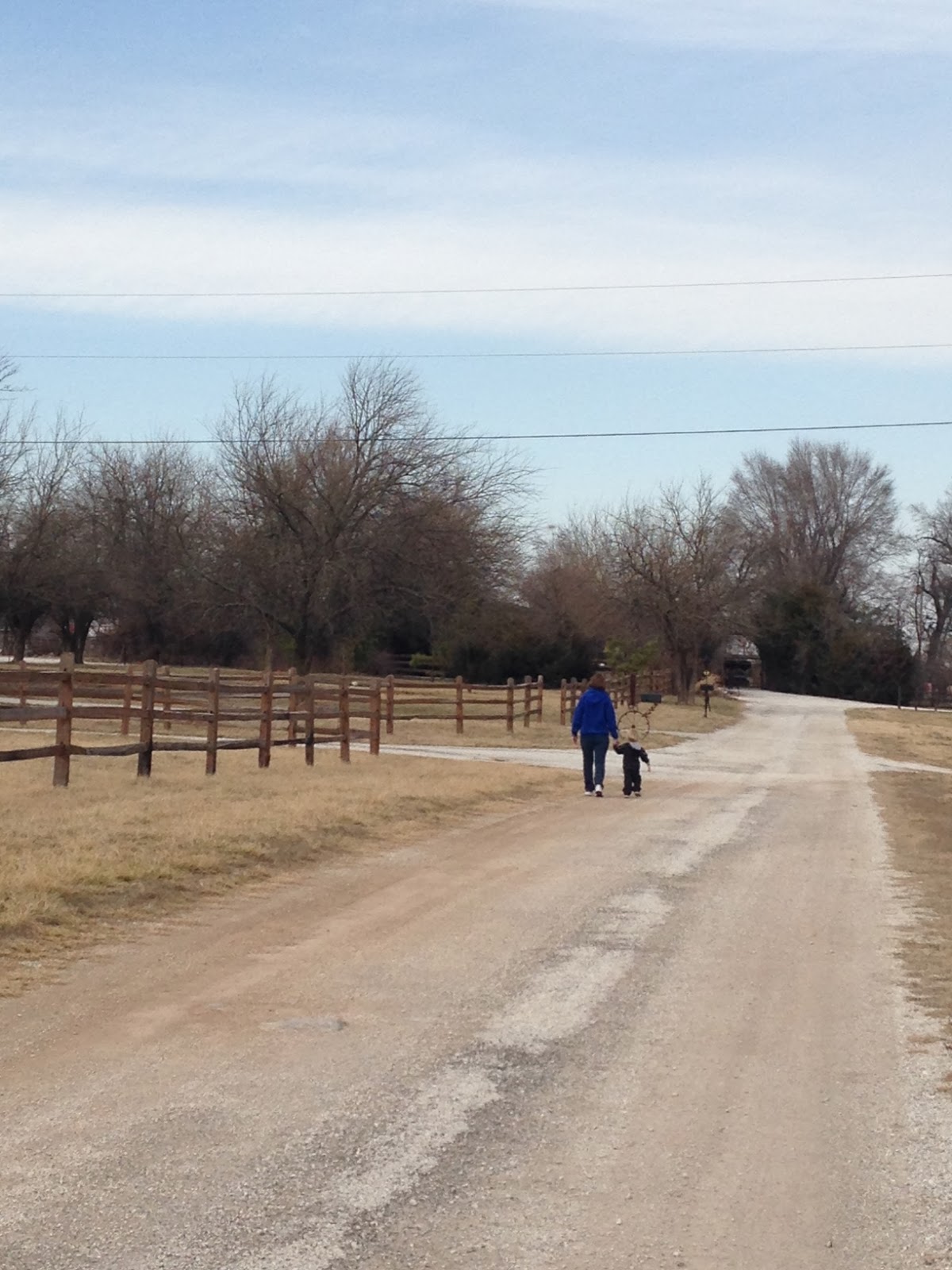 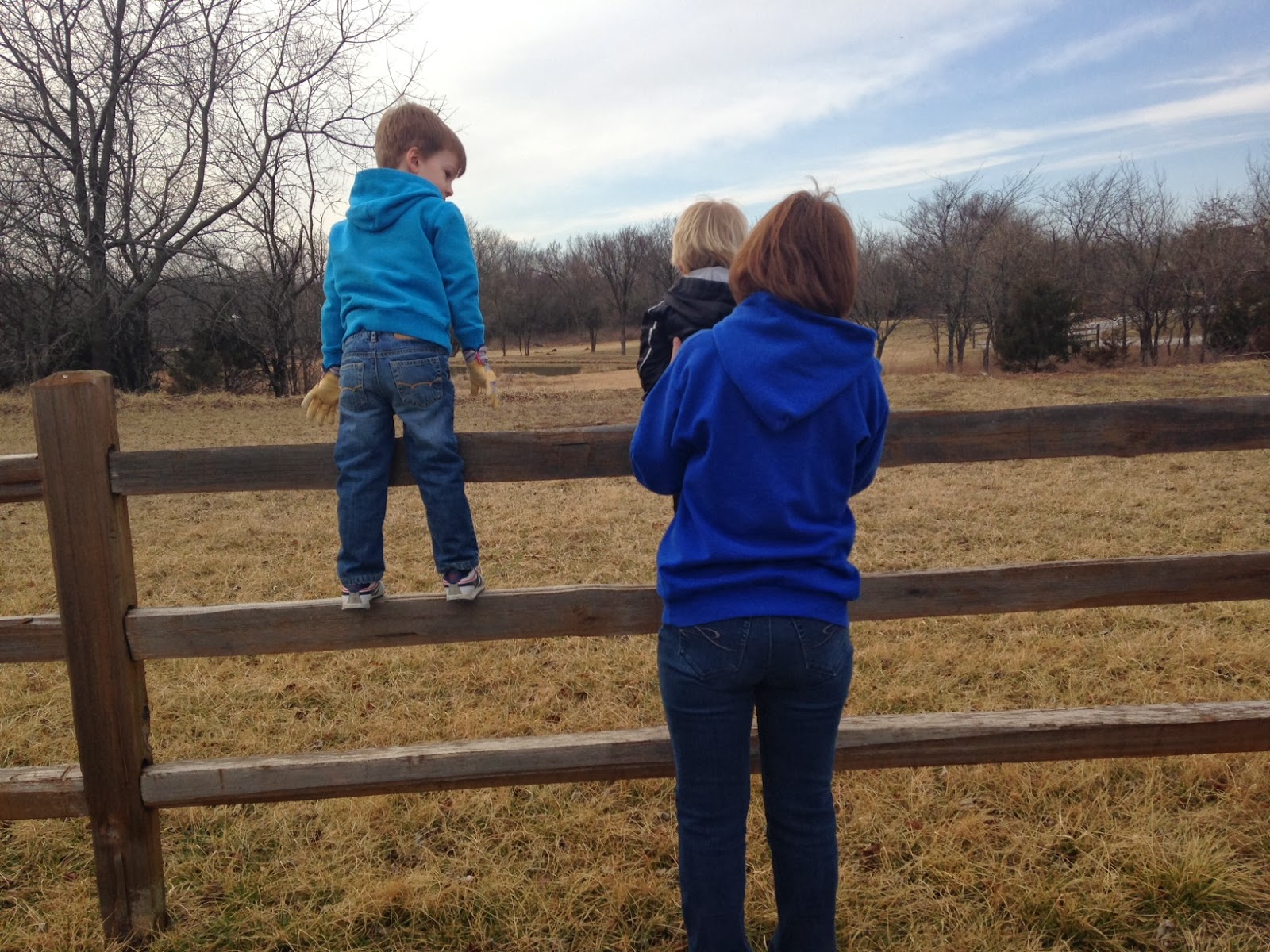 It wasn't long after the boys had finished with their chores that my sister arrived with my niece and nephews & Brendan, Kaden and Logan are both smitten with Brett's girlfriend. They are hoping that she gets to come to KC for Logan's birthday in May & even said that if they ever had a baby sister they wanted to name her Brendan. Don't hold your breath boys.

They barely made it into the house and we were loading up and heading to see Papa Richard. Papa Richard had one of his hips replaced the week before and we wanted to bring a few smiles to his face. He was surprised to see my boys so quiet & frankly so was I and then I noticed who they were by, Brendan. They were just standing on the wall next to her, asking her questions on how to play the game on her phone.

We finally made it back to Grandma and Papa's house with pizza in hand--anyone had Casey's pizza? Delicious. After we got finished eating it was time for a new Hartley Challenge--wood splitting. Papa Tom made this task look pretty easy but I can now say, it ISN'T. I missed my mark the first 3 swings and even when I finally hit my mark, the wood didn't split. But you know, I am perfectly fine not being able to do this task because I won't be asked to do it in the future! 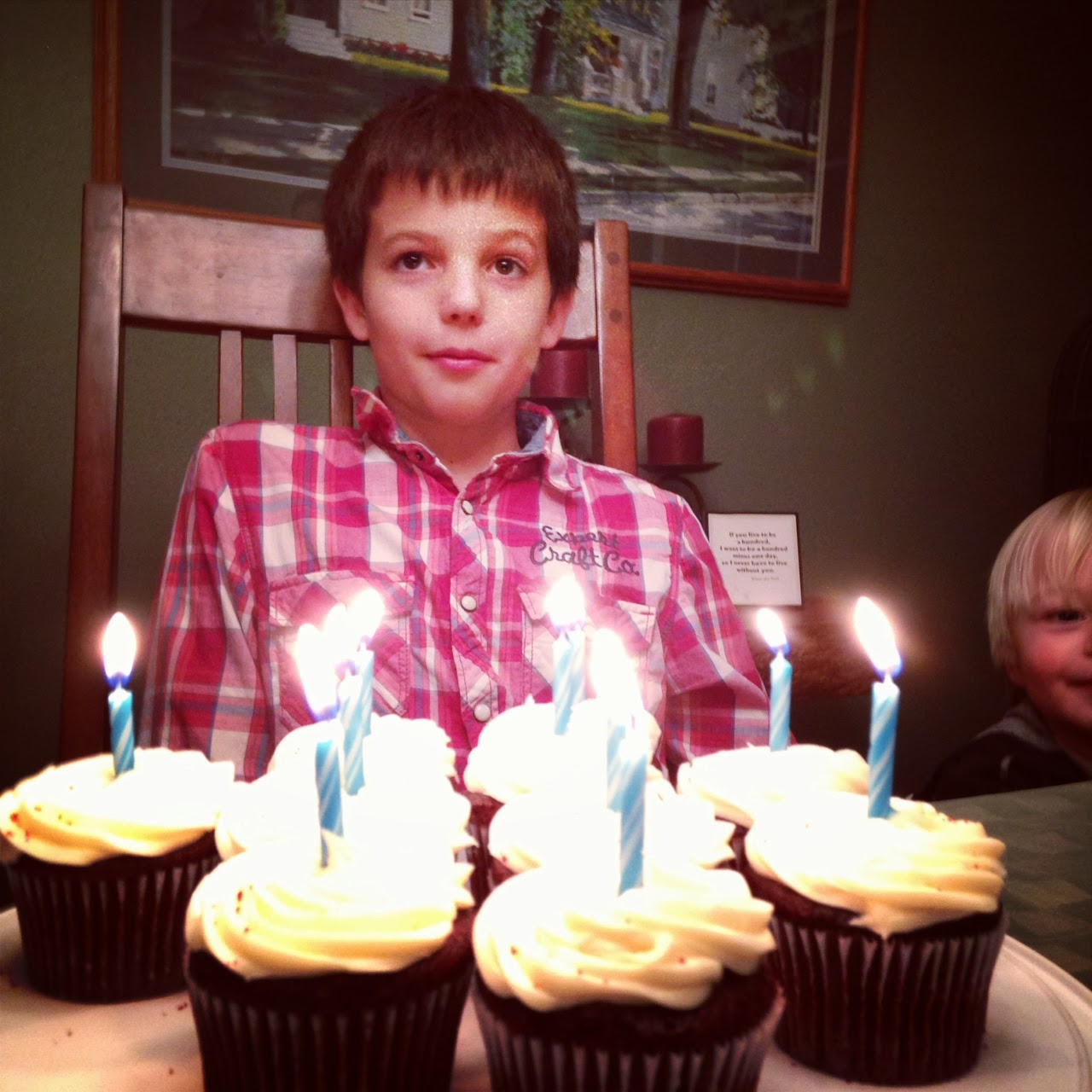 Before the Siebert crew left for the evening we had one last celebrations--Blakers turning 10. I can't believe he is 10 already. It seems like just yesterday we were all waking up in the middle of the night and making our way over to the hospital to meet him for the first time. It seems like just yesterday that we were having a Spiderman birthday and he unwrapped a box full of bubble gum & a new video game for his Wii. & it seems like yesterday that when I visited he would crawl up on my lap and want to snuggle with his aunt. Now he just wants to try and prove he can beat me in wrestling. Little did he know that his aunt had a few never-before-seen wrestling moves & he didn't stand a chance. After three failed attempts he still thought he could take me, so I accepted his challenge one last time & said that I would take him down in 10 seconds and when I did, he would have to announce proudly to his whole family how awesomely strong his aunt is. It took me 2 seconds and he was down on the ground, he just laughed in amazement and proceeded to tell us all how embarrassing that was & that he needed another shot! There will come a time that I will no longer accept his wrestling challenges but I think I still have a couple more years before I have to worry about that. Happy Birthday Blakers.

Weekends at home are just the best, especially when the things you were so worried about go so smoothly.