When Justin turned 30 he spent his birthday weekend at the Final Four in Houston with a couple friends. When I turned 30, my friends were all pregnant so Justin and I had a night out at the Plaza & then took off the next morning and headed to Columbia for a basketball game. & don't ask me what I did last year, I have no clue…

But this year, this year was going to be different. In October one of my bestest girlfriends had a pretty big birthday, she turned 40 & you can't just give a girl some smell good lotion or a day at the spa for that sort of birthday so I thought, why not give her a girls trip. I'd take her to Chicago---well, Southwest would take us to Chicago on points---we get a hotel & we would shop on that Magnificent Mile. We started looking for dates & then JT, aka Justin Timberlake was headed to Chicago & it was the weekend after my birthday so of course we knew it was meant to be. (This was all done before Justin added two dates to KC).

We had decided that the only thing that we would plan beforehand was the concert, everything else we would do on the fly. 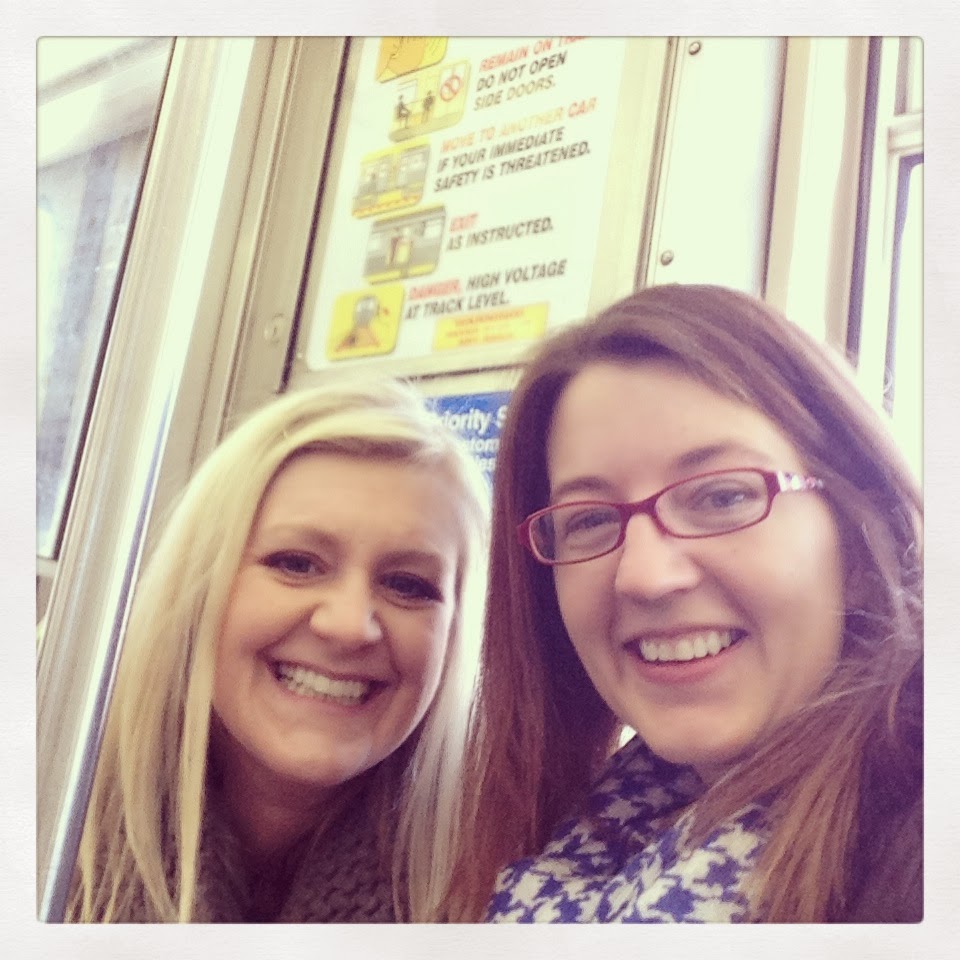 I had never taken the train but we knew we could save at least $50 by going with the $3 train ticket & that just meant either more drinks or more clothes and we were totally cool with that!  & you know, the train was super easy, it had us downtown within 20 minutes and all we had to do was walk 1/2 mile or so, and we were at our hotel. & the walk allowed us to size up what stores we wanted to hit the following day!

Once we arrived at the hotel we checked in, actually, we tried to check in---our room wasn't ready yet. But we were early so they took my number and said they would call as soon as they had our room clean. Great, we were hungry so we stored our luggage and headed off to lunch. We went a couple blocks down to the one and only TGI Fridays. Yes, we were stepping out of our comfort zone---but really, I knew they had Redbull, mozzarella sticks & mashed potatoes. So we went--Jennifer was a good sport.

After we had lunch we headed back to the hotel & checked the status of our room, it wasn't ready. They had 30 minutes left. That came and went. We checked the status once again and now they no longer had a room, it needed maintenance. They had no other "Executive Suites" available, the other two were occupied, so now what? We all know I am not a stranger to traveling and I understand that these things happen but I also know there are extra rooms which they always keep available for issues such as ours. At first they offered us a standard room, double beds but no comps. I said no, that wouldn't be happening. They then offered us a Superior Suite which had one king bed and one pull out sofa. I laughed & said that we weren't sleeping on a pullout sofa. What else ya got? We finally settled with a standard room and a lower rate, plus a couple free drinks to a bar that NEVER opened. At the end of the day, we had a room and we had plenty of time to make it to our massage Jennifer had scheduled for us.

& just as we closed the door to our room there was a knock. The concierge had a delivery for us. As I opened the card & read what it had to say, I noticed that whatever it was from Jake & I let Jennifer take it from there. He had sent us a very beautiful bouquet of tulips and roses & certainly made up for the issues we had as we were checking in. 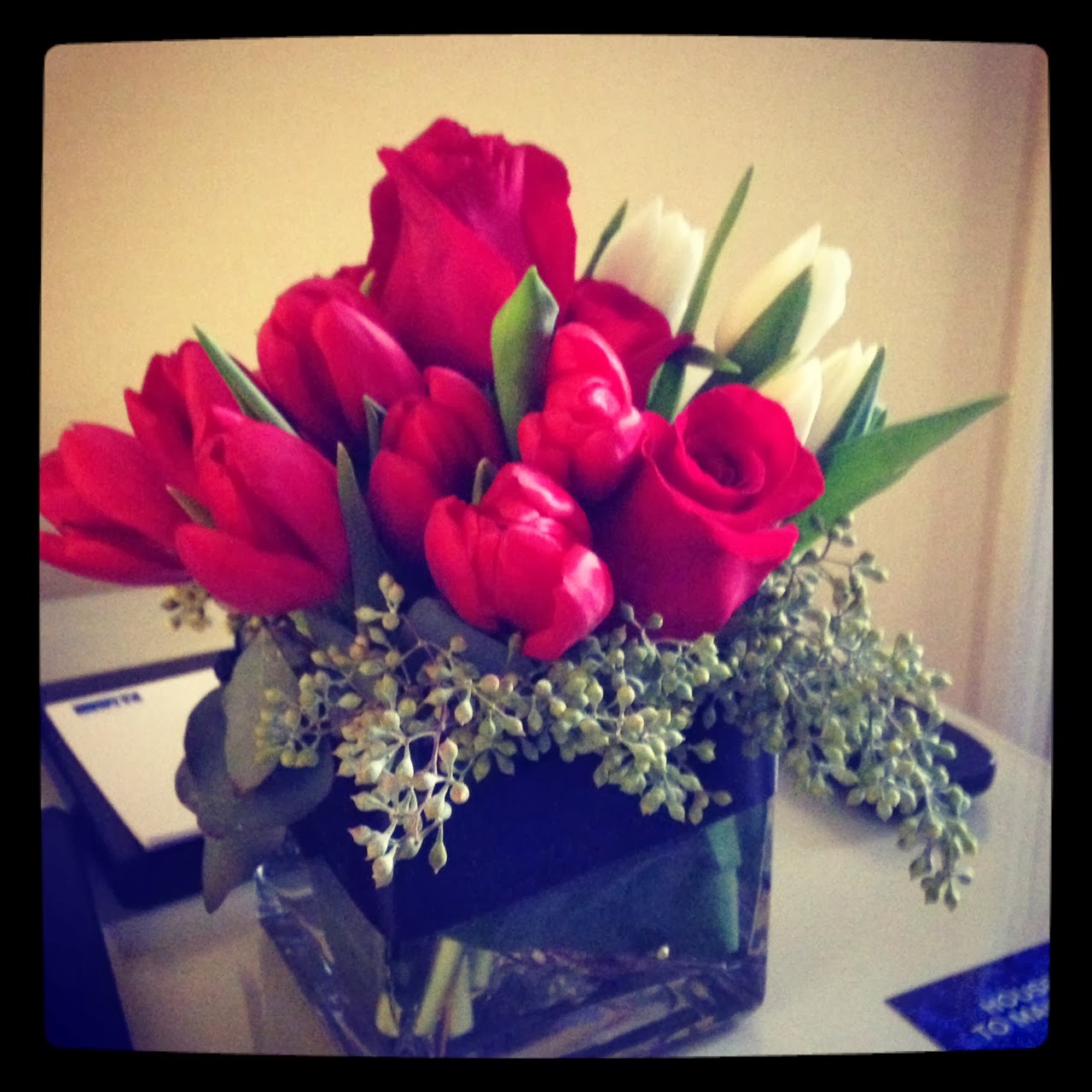 The massages were amazing. I say it each time I get a massage & I am not sure why I don't follow through but I think massages should be mandatory on a monthly basis. For 60 minutes I was completely, 100% relaxed without any worries in the world--and those knots in my shoulders, well they got worked the HECK out.

After our massage we headed out to dinner. We figured we were early enough & we could try and get a table at Giordano's pizza but when we arrived, the line was OUT the door. It would be an hour and a half wait and then an hour for our pizza to be fixed. Wasn't really craving pizza all that bad anyways so we hopped across the street. We had good food and drinks in a matter of minutes--much more our style.

Finally we made it back to the hotel where we decided to rent a movie. Now it must be known that I was traveling with a movie buff. Jennifer has made it through most of the Oscar nominated films already & has seen a number of other movies too--so our options were slim. We went ahead and went with Best Man's Holiday--who wouldn't want to look at a shirtless Taye Diggs hanging out with his shirtless friends! The movie made for great eye candy and it wasn't just funny, it pulled at your heartstrings. We were both grabbing for Kleenexes.

Sunday was JT day & we were both on the hunt for something new to wear to the concert so we hit Michigan Avenue and went down one side & up the other. It was cold, after all it was Chicago & it is February but luckily our hotel was perfectly located and we could stop in, drop off a few bags, warm up and head on out. & since we didn't get to have pizza the evening before we thought we would give it a try during lunch time. This time we went to Gino's East. We had tried eating here in 2010 for Tiffany & Jason's 30th birthday but again, the line was crazy long but not this time. We got in without a wait. The atmosphere was great. The service was great. The pizza was pretty good & it gave us the extra energy we need to continue shopping. 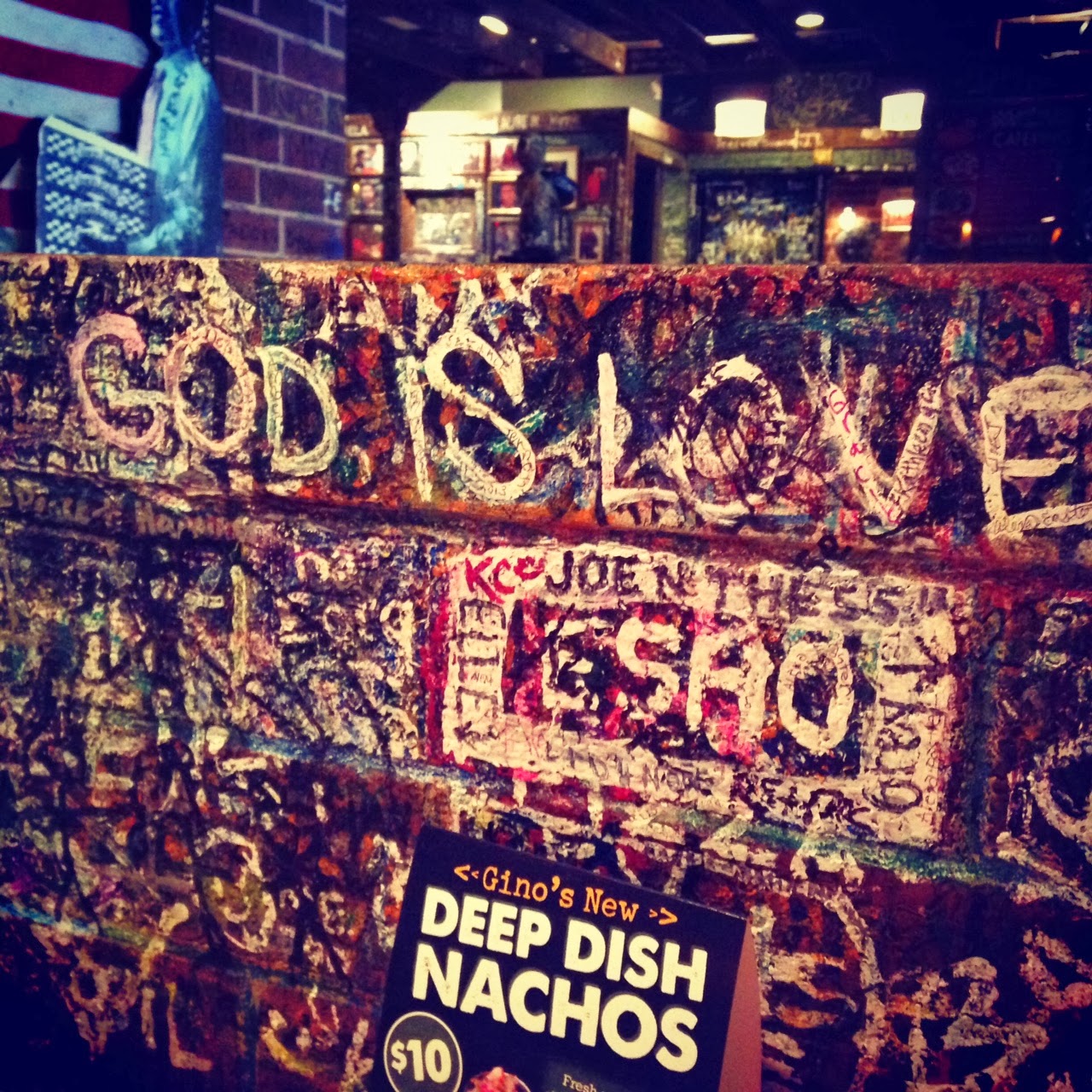 In the past I would always visit H&M for the boys' clothes, I loved how no one else would have them because there wasn't one around. Well now there is & although I still buy a lot of their clothes there I still love it when I find a store that is my style & isn't in KC---Zara. I could have purchased a lot more than what I did but I was traveling with a carryon and was hoping I could fit everything I purchased in the bag for the trip home… 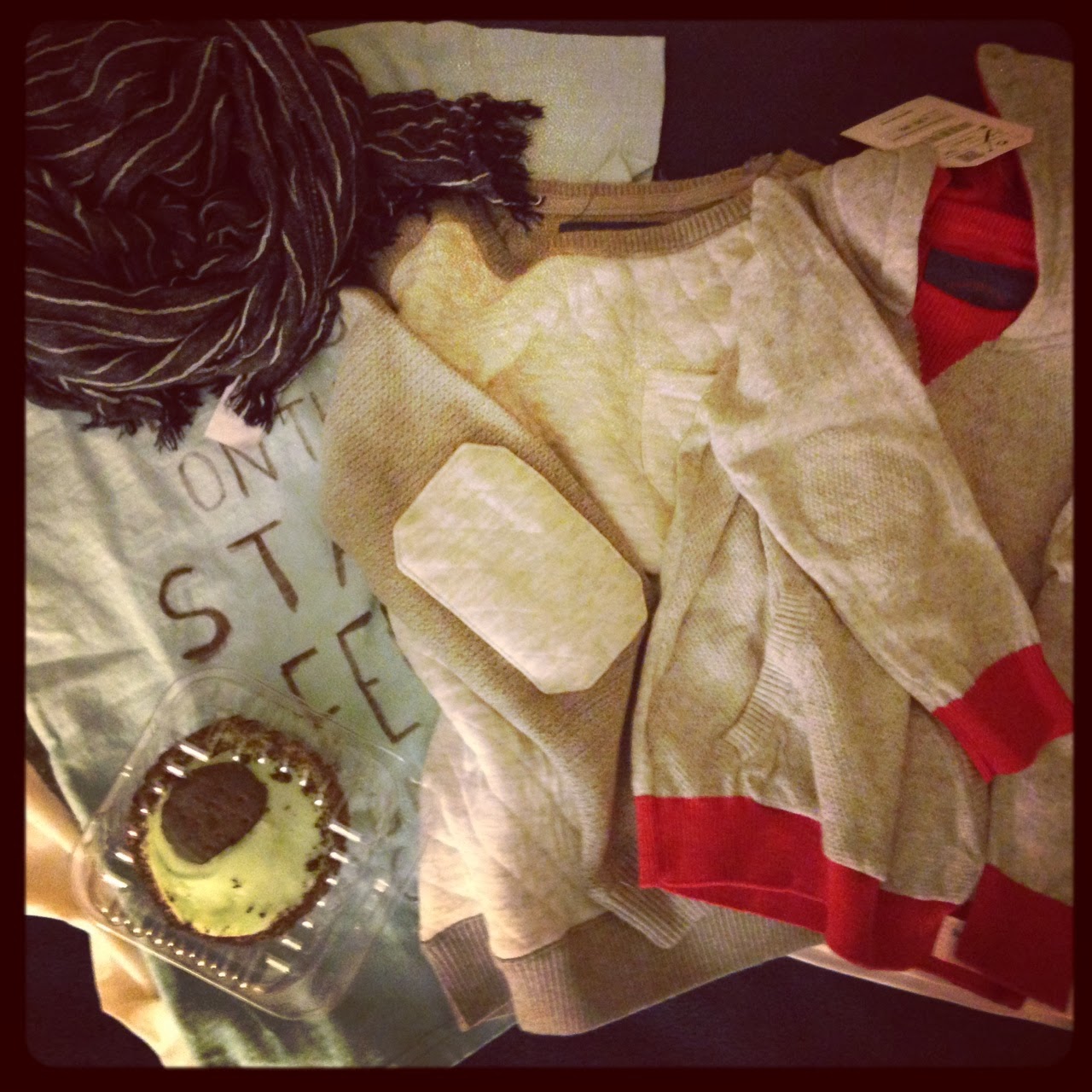 & we hit up Gap, where both Jennifer and I fell in love with their athletic wear--check it out. & we may or may not have bought just as much stuff for the boys at Gap as we did for ourselves. So far we weren't treating ourselves but that all finally changed. We decided to pop into Express, I haven't shopped here in years but it was 40% off the entire store, maybe we could find something cute there for the concert. We both found skinny jeans which I'll be honest, are the most comfortable skinny jeans I have ever worn. We both found cute little tanks & I found a leather jacket & Jennifer a black 'jean'like jacket. Technically we both had the black 'jean'like jacket in our hands but it looked better on her than me and that's when I found the leather jacket that I kind of fell madly in love with. Win. Win. Win.

We headed back to the hotel and after getting ready I asked Jennifer where her scarf was. She said she didn't get it. WHAT!?!?! It was gorgeous! So I made her go back and get it & the very nice salesman suggested a tiny pub up the street to grab a drink before the concert. It was tiny. It was festive & just perfect for us. Next Stop JT. We were so excited for this concert. We were looking forward to some great music & watching some great dancing. & so was a lot of Chicago. But before the concert even began I got a text, our flight the following day had been canceled and we needed to rebook it. Ahhh, we could do that later, we had more important things going on… 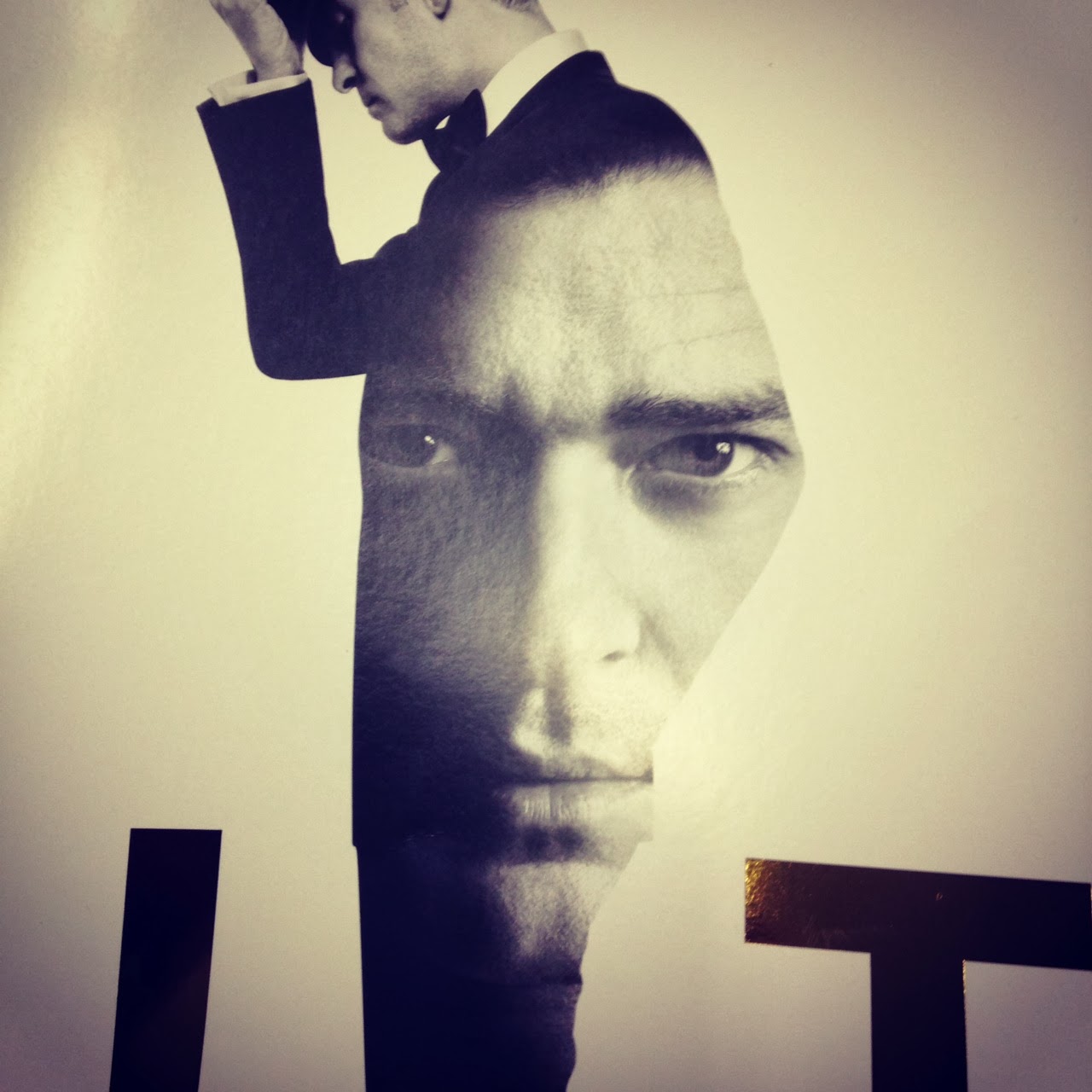 When we arrived there was a Deejay getting the crowd going. Justin actually doesn't have anyone open for him, just the Deejay & he was good, the music he was playing was getting the job done but then he quit right at 8. Justin didn't come on until around 9 which wasn't the plan so for about 50 minutes we all were sitting there wondering if we had time to go get another drink, a hot dog or even use the restroom. It was a very restless 50 minutes but finally he came out. 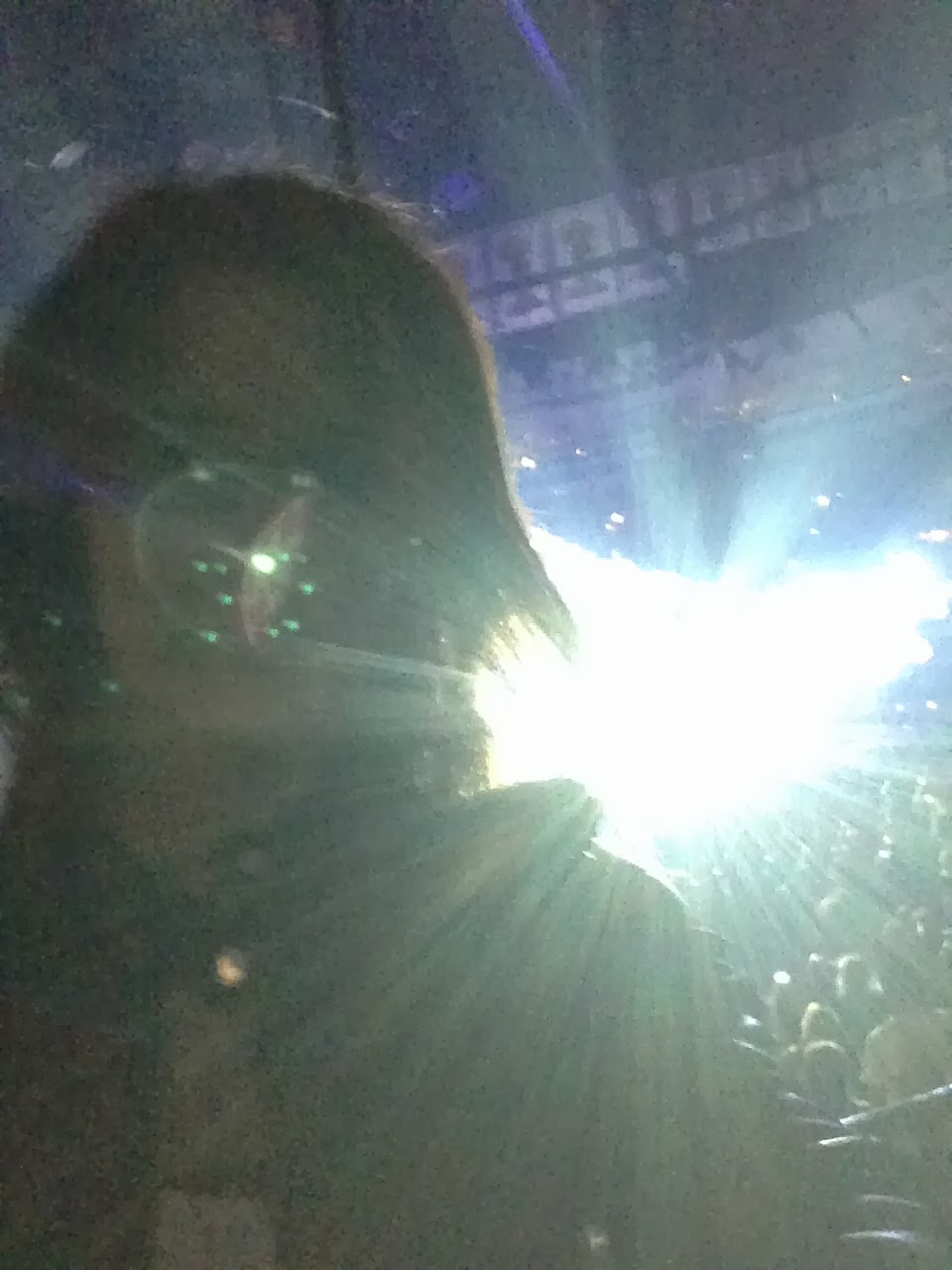 JT played for over two hours. He had two sets, each about an hour & played 25+ songs. Vocally he was great. He played the piano, guitar, the keyboard. He danced on his own and with his dancers. He was good. He wasn't great---or at least in my book he wasn't great. I was expecting something big, to be WOWed and I just wasn't. Jennifer felt the same way. I guess I like to feel as though I am part of the concert, that I am just wrapped up in this world the entertainer has created but I didn't. I really enjoyed his older music & his new music is great it just didn't come across all that well in concert form---to me. The Chicago Tribune will disagree, heck all of KC will probably disagree in July when he comes but you won't find me lined up waiting to get into his concert. & I can't stress it enough, this is just how I felt, someone else probably thought it was the best concert ever & maybe it was. To each their own.

I will say that when the stage started rising and then coming over the crowd, that was pretty cool. The stage went from one end of the United Center to the other, right in front of us. He played about 5 songs from this end of the stage before returning to the front. I feel bad for not being so IN LOVE with his concert & honestly, I hope I am wrong and everyone who has a ticket for his concert in July has the BEST time ever. & although our expectations were not met (I am known for having exceptionally high expectations) we still had a great time and it didn't effect our girls weekend one bit. 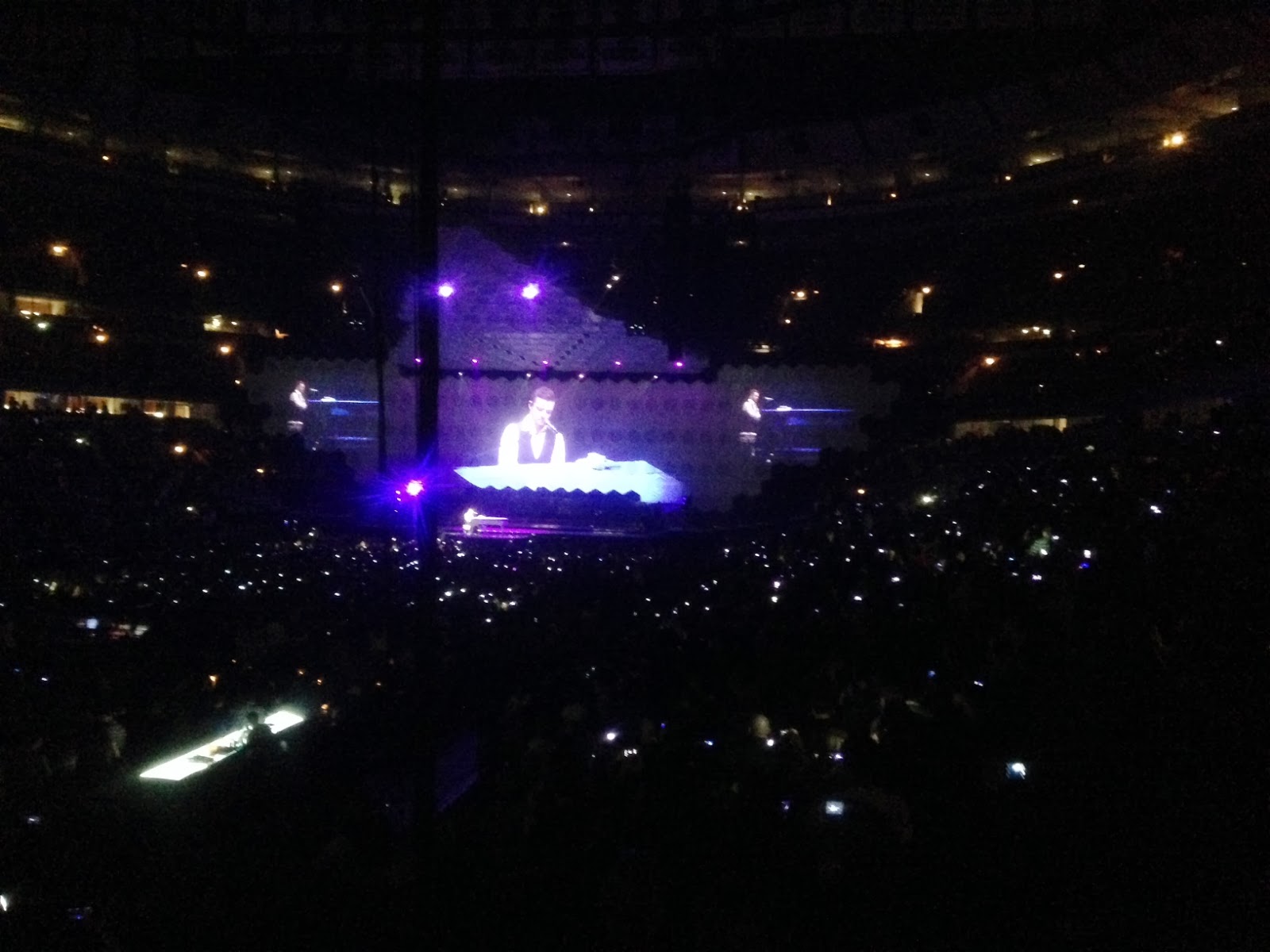 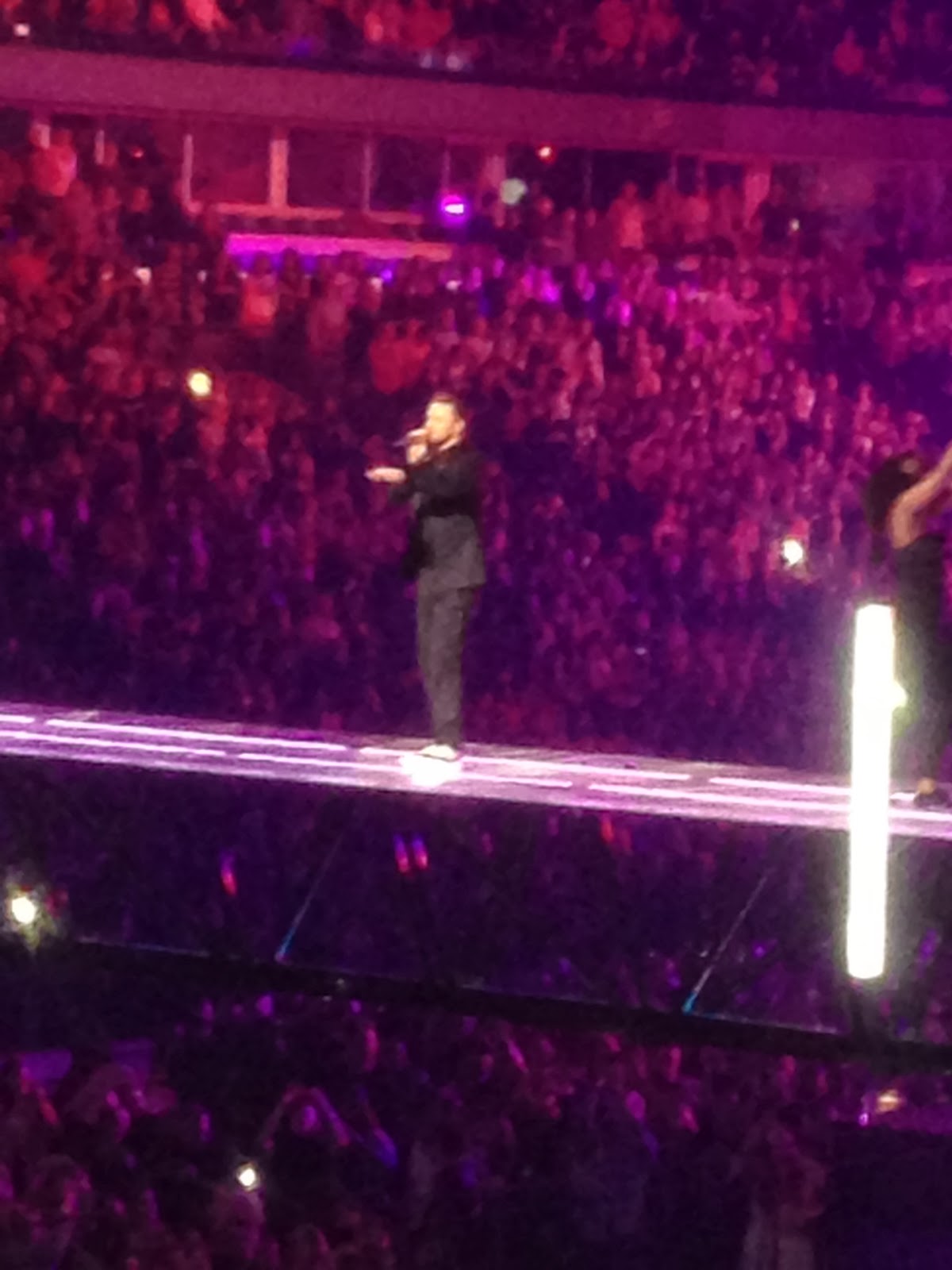 The snow however did. We ended up having to book the 8:50 am flight out the next morning. Our plane had to be de-iced as the snow was starting to fall but wheels were up and we were headed home. Lucky for me my MIL had the boys & they picked me up at the airport. I am not sure who was more excited, me or them. & even though our shopping was cut short---we really wanted a few more pairs of jeans from Express--I got to spend my afternoon with these two lil guys. 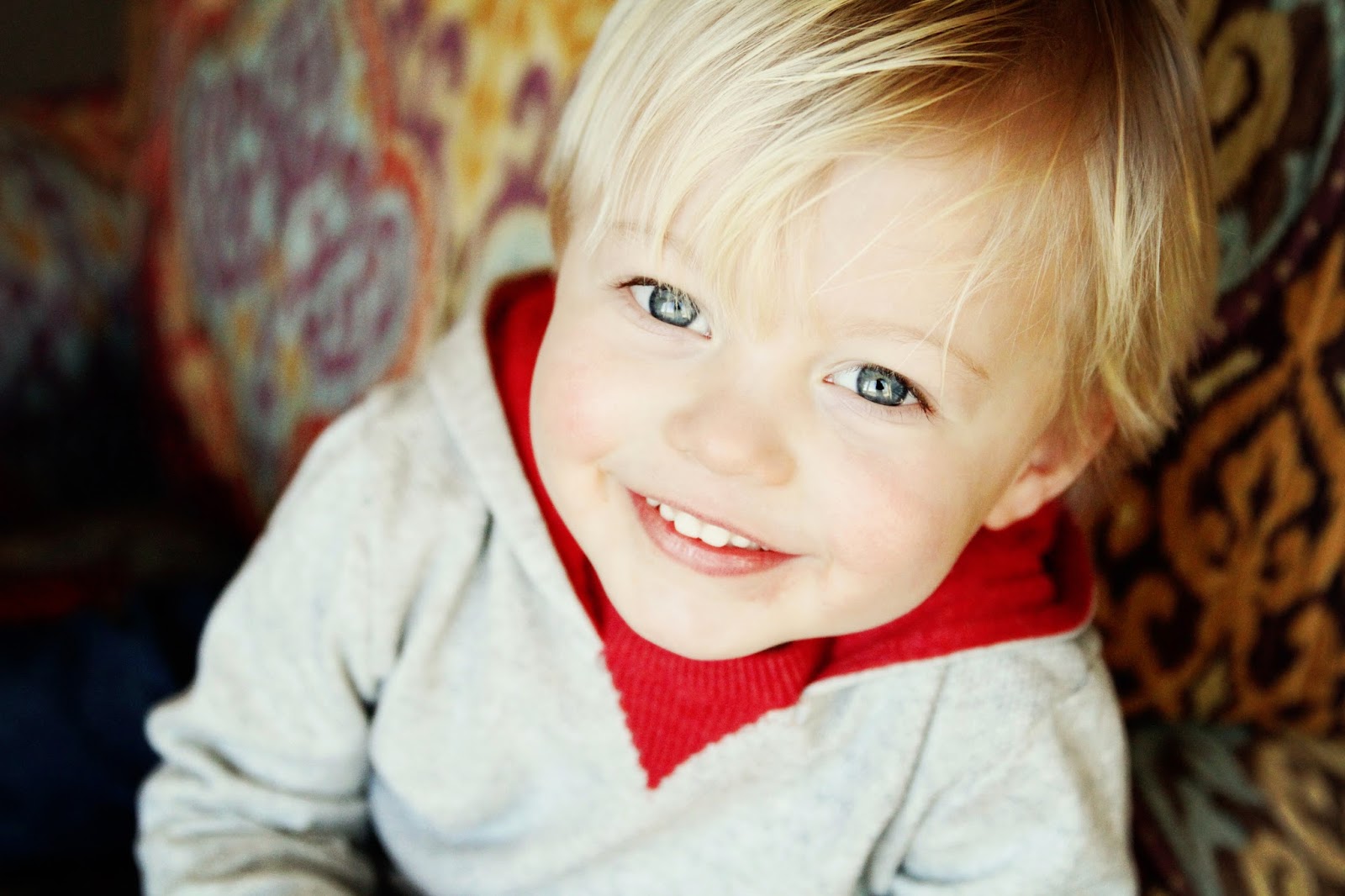 Not that bad of a consolation prize if you ask me.
Posted by Kayla South at 10:25 PM